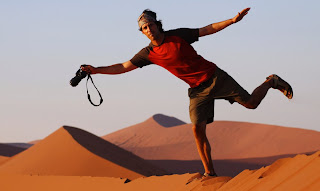 April 29th, 2011 (February 2011) – Dune 45 is so named due to its location 45 kilometers from Sesriem along the road in Namib-Naukluft National Park. It is one of the most accessible dunes and sits very near to the road. We went for an exhausting jaunt a good way up the 150m of good ole Dune 45 in the evening on the day of our arrival in order to catch a glimpse of the sunset. The clouds foiled our sunset aspirations but the view was anything but disappointing. Besides, the sunrise on the following morning more than made up for it.

The Namib Desert is f***ing ridiculous. It just is. If the place does not impress you than I submit that you suck. It really is that simple. Judgmental? Sure, but say that after visiting. I will admit that if your experience is nothing more than a shuttle bus spectacular during the busy season than perhaps a jaded reaction might be understandable. Maybe. But then again you visited one of the most dazzling sights on the planet in a shuttle bus with folks possessing an excitement level on par with bubble gum flavored bubble gum. Sorry to inform you that you do, in fact, suck.  Don’t like my conclusion? Tough titty said the kitty to the big brown cow. I believe it impossible to over use that phrase, especially during a serious conversation.

We arose before the sun, brewed up some lifeblood (i.e. Nescafe Expresso), mounted Sparky, and jetted off to meet the day atop Dune 45. I think it imperative to enunciate ‘Dune 45’ in a similar manner to the way many folks effusively pronounce the malt liquor Colt 45. Dune forty-FIVE!!!!...AH!!! It just feels right. So we waited atop Dune 45 for Mr. Helios to grace us with his presence. We were not alone but the summit was anything but crowded. And in this instance it was nice to have some fellow travelers with which to savor the moment and give the scenery some perspective.

We gamboled about on Dune 45 for the better part of three hours. The shadows. The colors. The wind. The air. All of it conspires to beguile and make you consider the possibility that Wonderland may actually exist. And if it does then perhaps this area of the Namib lies within one of its zip codes. I walked along and explored the far side of the dune careful not to disturb the perfection that defined the wind-swept edge of the dune. I also did my best not to pass out as trudging through the sand is, to put it mildly, physically demanding.

And the best way to conclude your Dune 45 experience? By tearing ass down the side as fast as you can while attempting to avoid ‘ass over tea kettle’ syndrome. Psychological regression is unavoidable. I estimate that my maturity level bottomed out somewhere between five and six years of age. Dune 45 is a time machine. Yes, yes it is.

After Dune 45 we made our way to the end of the road to take a peek at Sossusvlei. We were forced to park Sparky at the entrance to the area as it was 4WD only. The park service offers excursions into the heart of Sossusvlei for a modest fee. I was woefully unaware of what Sossusvlei actually was. I had neglected to read carefully before arriving. I figured you drive you in, take a few pics, and then exit shortly thereafter. Au contraire mon frère. It too is the stuff of desert fantasy and comprises a fairly large area begging to be surveyed properly. Not long after arriving I realized my sight-seeing faux pas and vowed to return the next morning to enjoy the color bonanza we had experienced on Dune 45. Simply put, at that late hour (10:30 am) the light could not do the place justice.

And just to punctuate surrealistic vision there were significant reservoirs of water covering the area beneath the dunes. Richie likey. Amazing. Returning was imperative. You want it. You want it bad.

On our way back to Sesriem that day I paused to photograph three ostriches making their way across a field of grass in the shadow of a large dune. It felt as apropos as a polar bear in my backyard. Springbok on a lifeless plain also felt less than apposite. 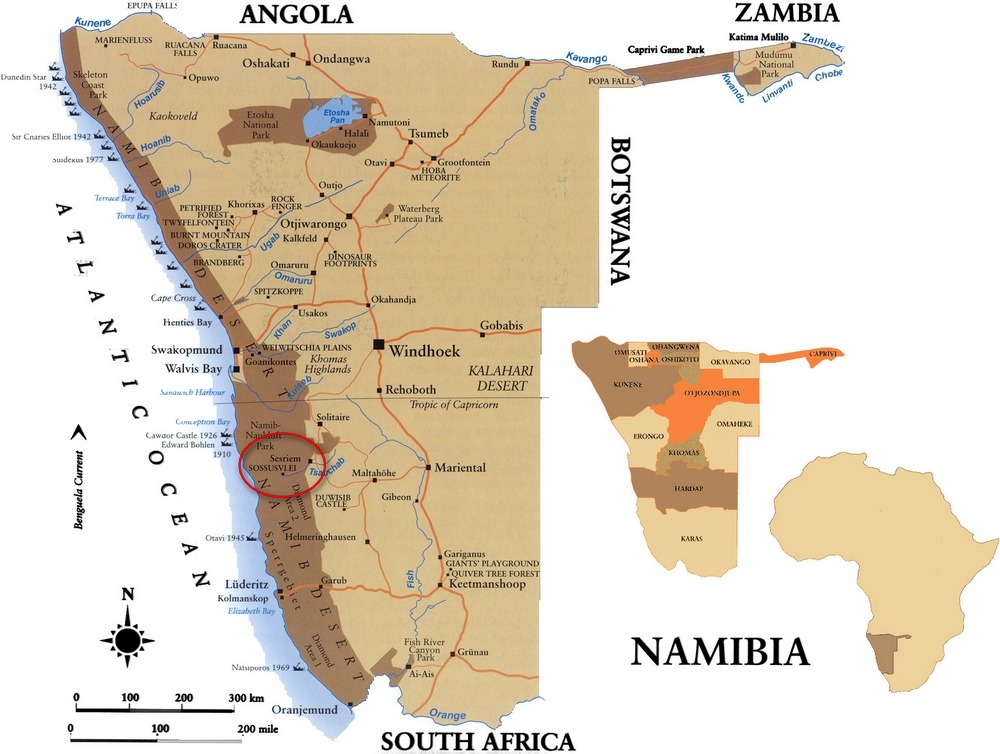 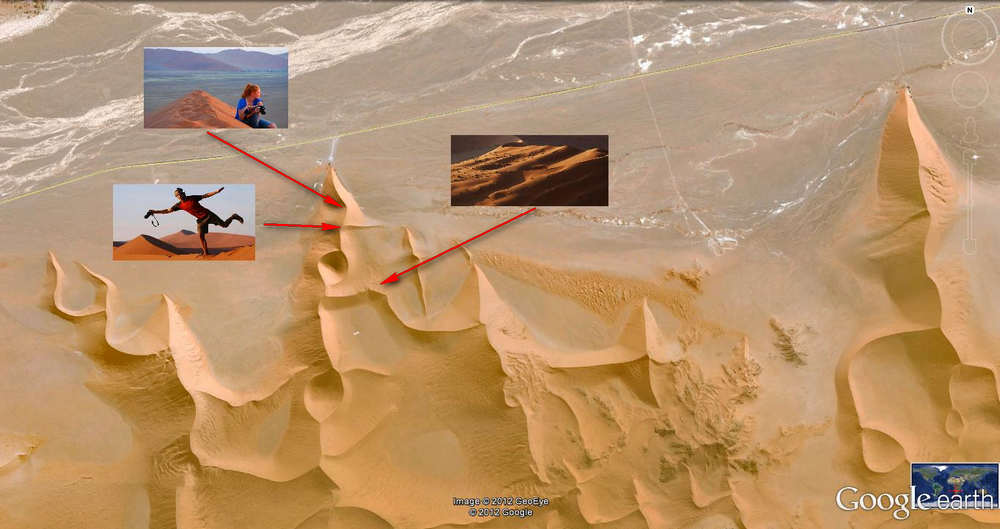 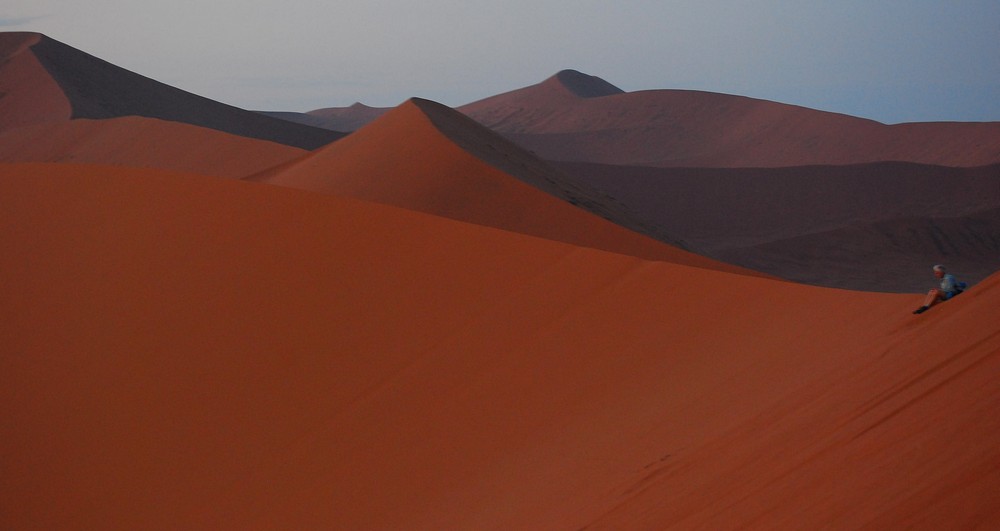 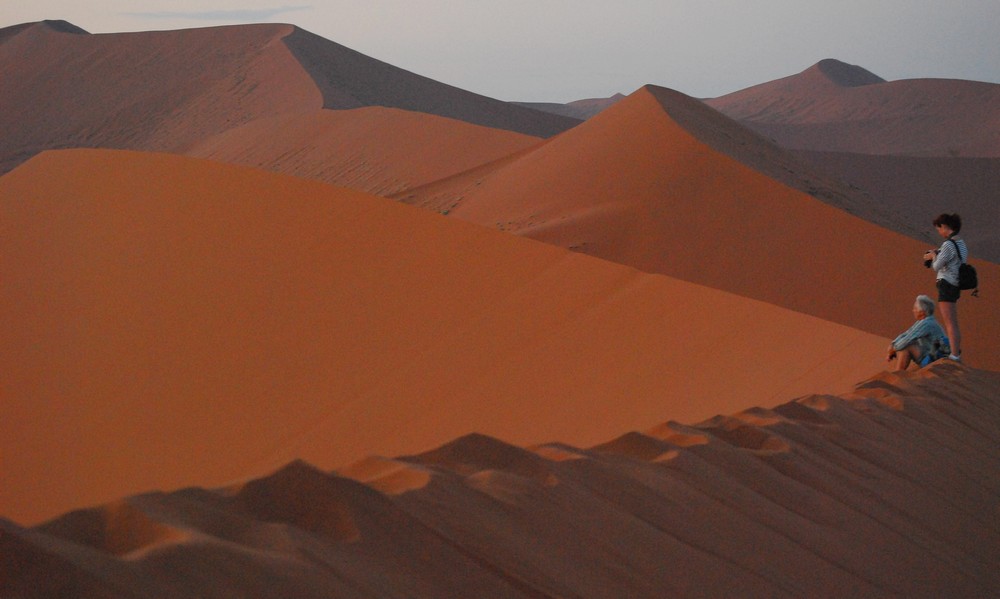 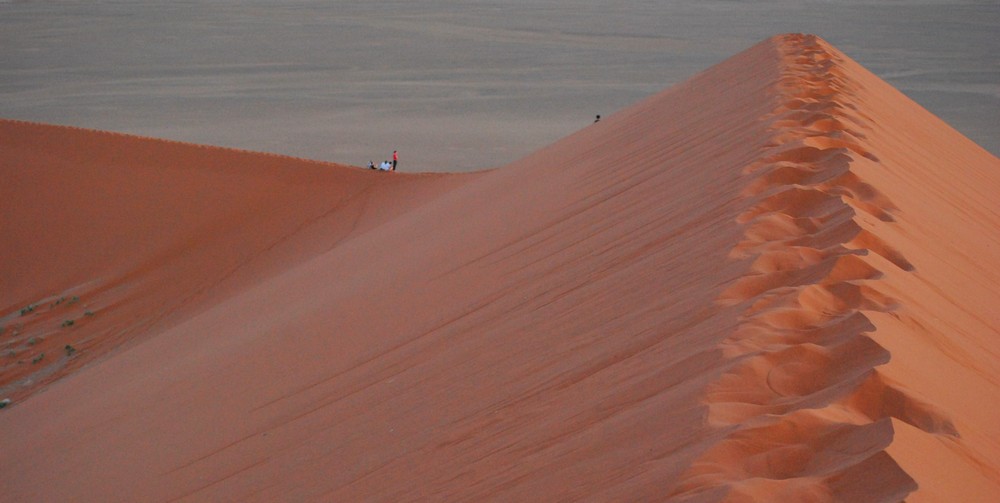 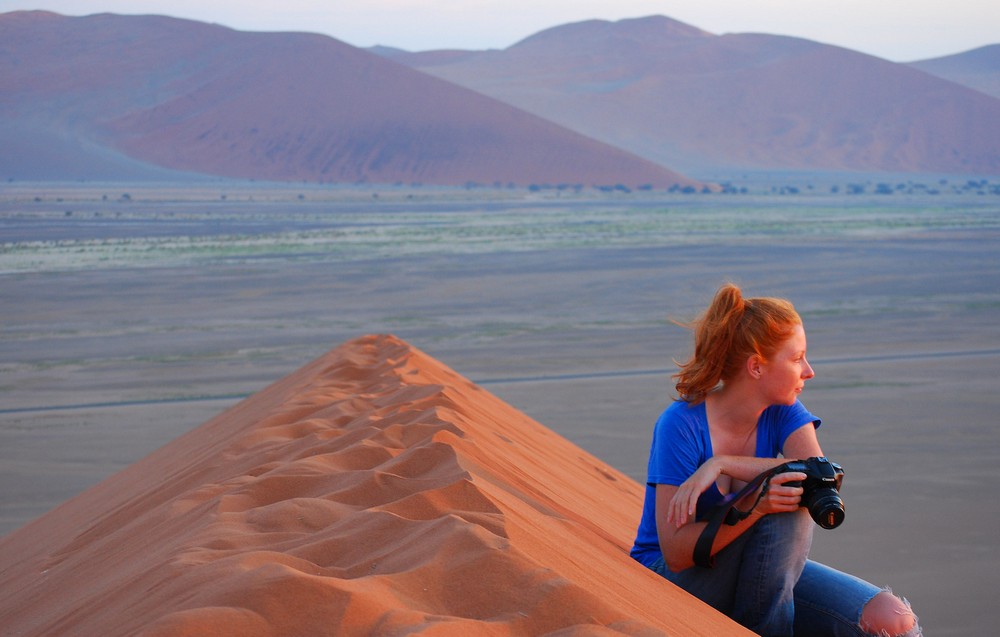 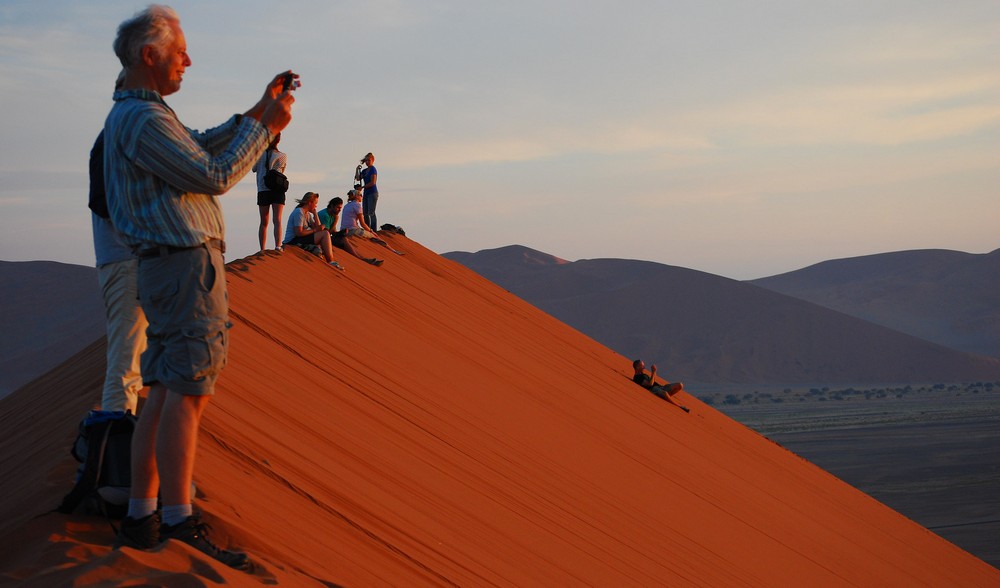 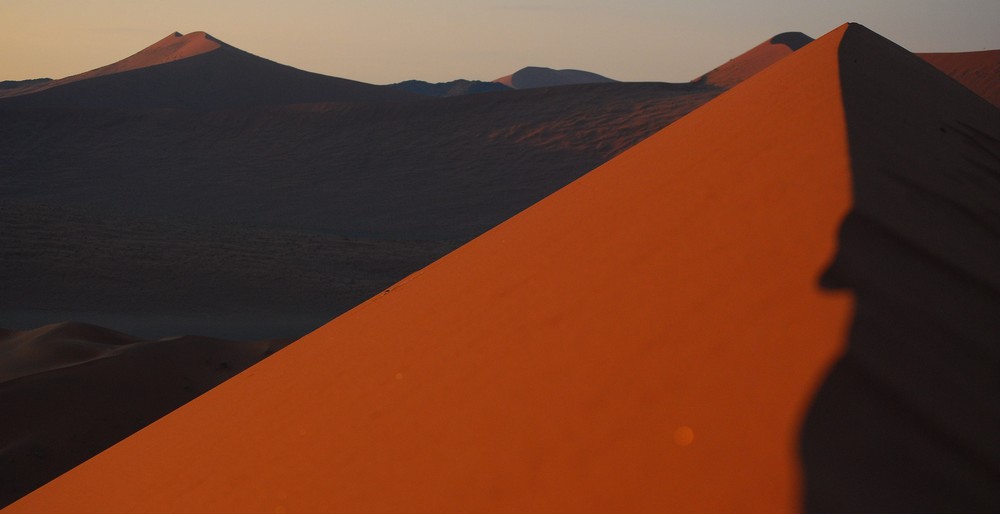 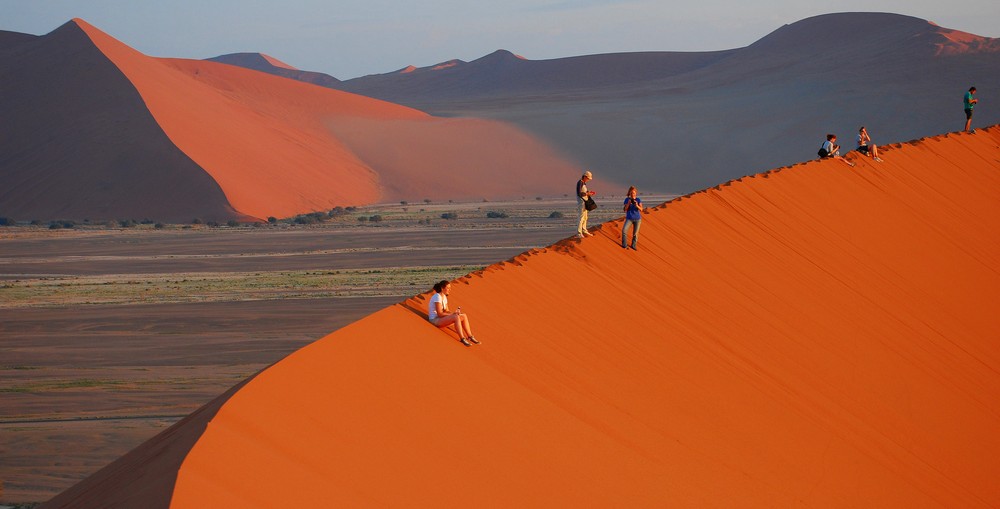 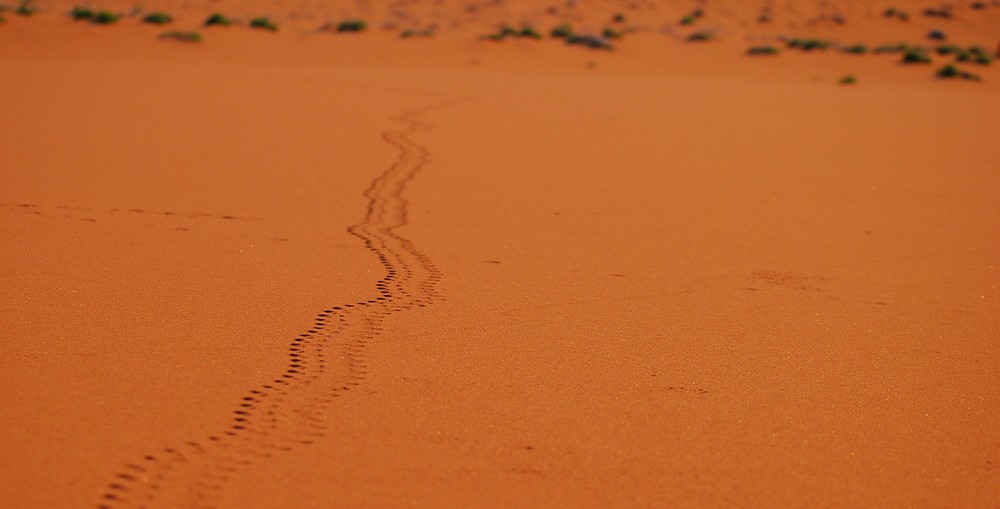 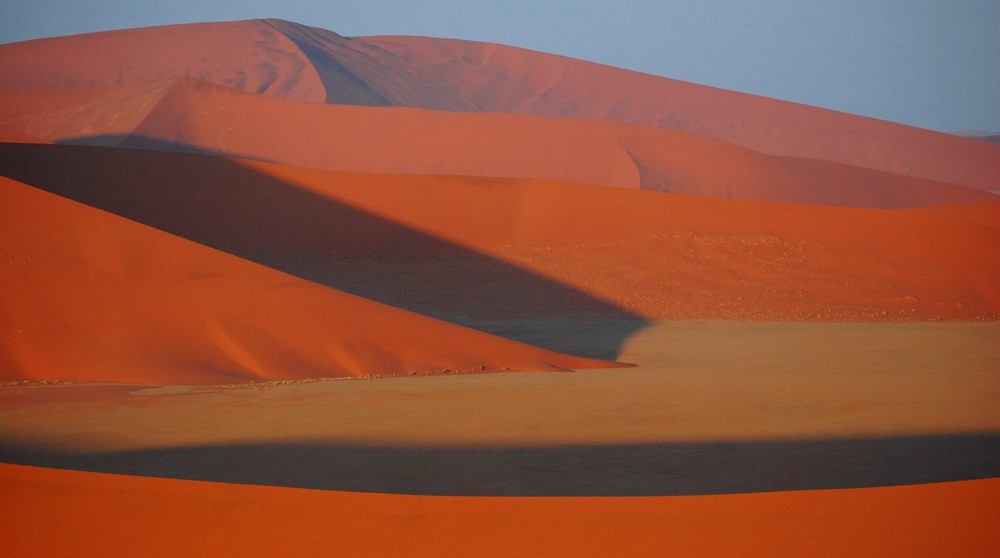 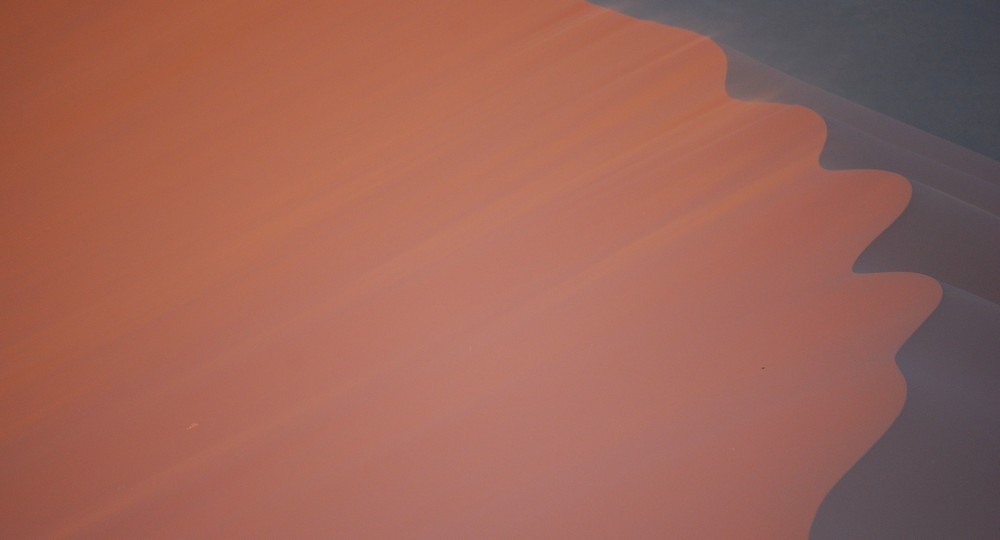 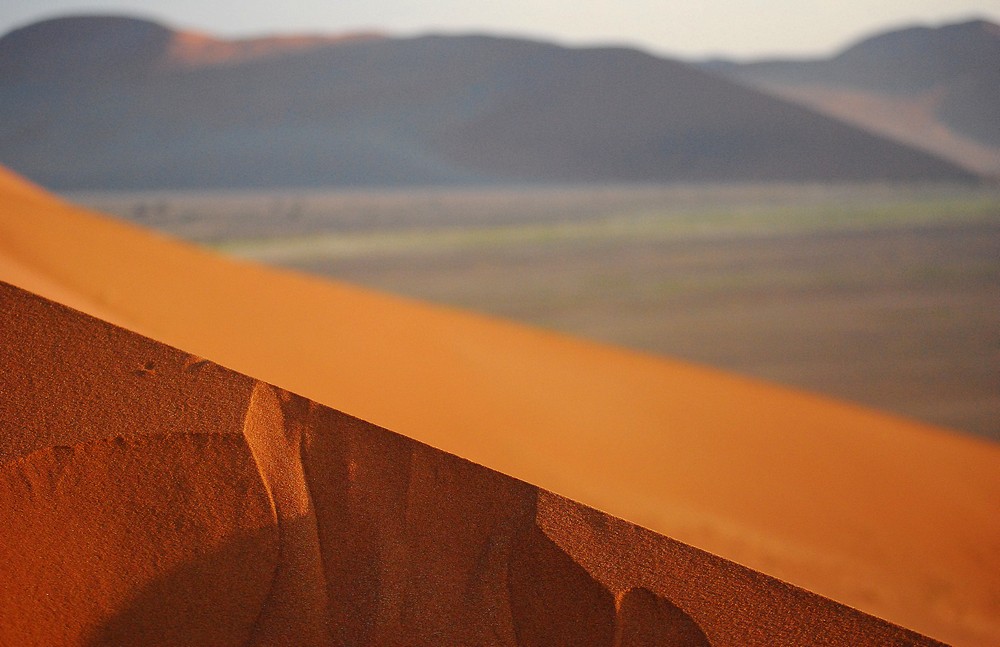 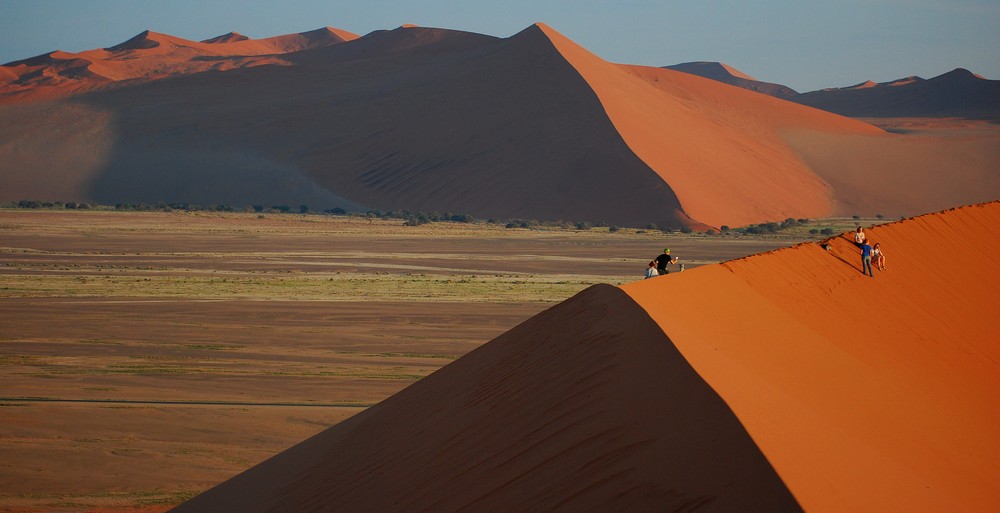 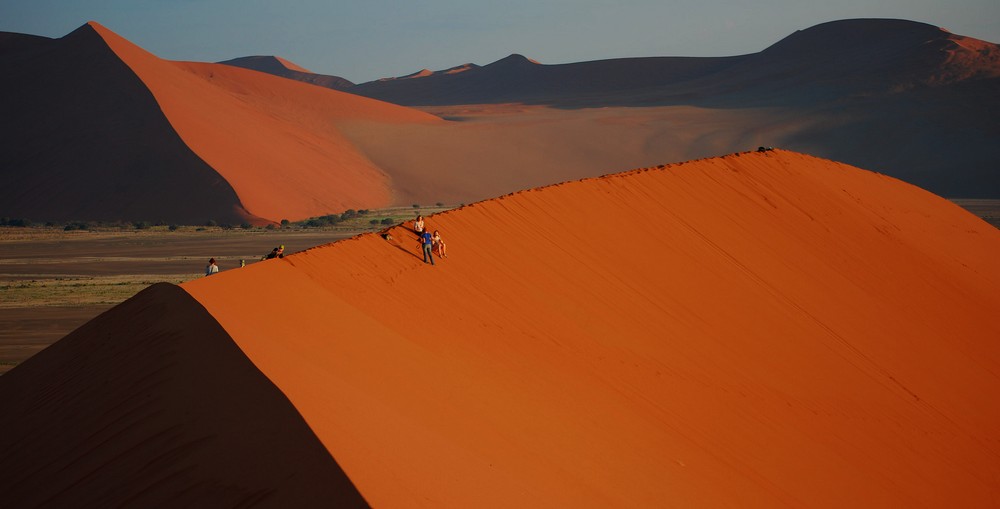 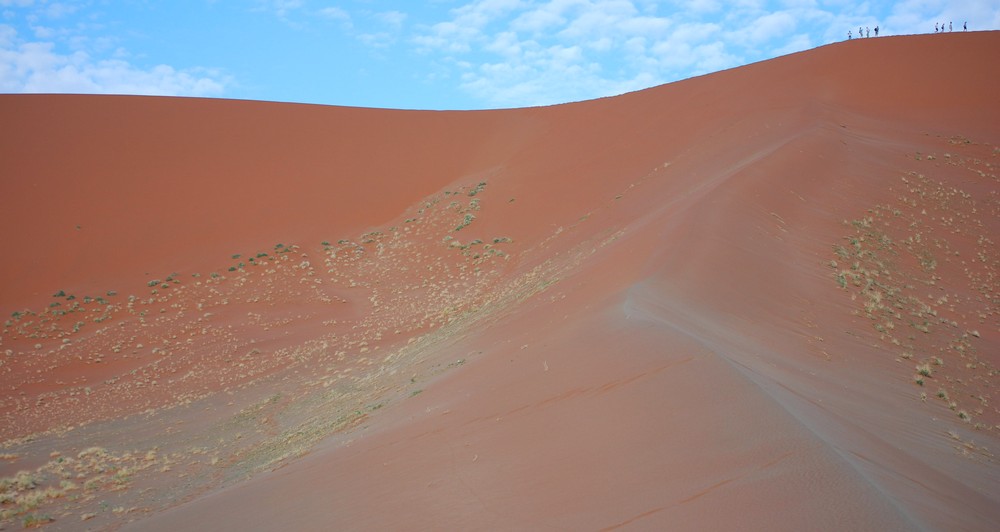 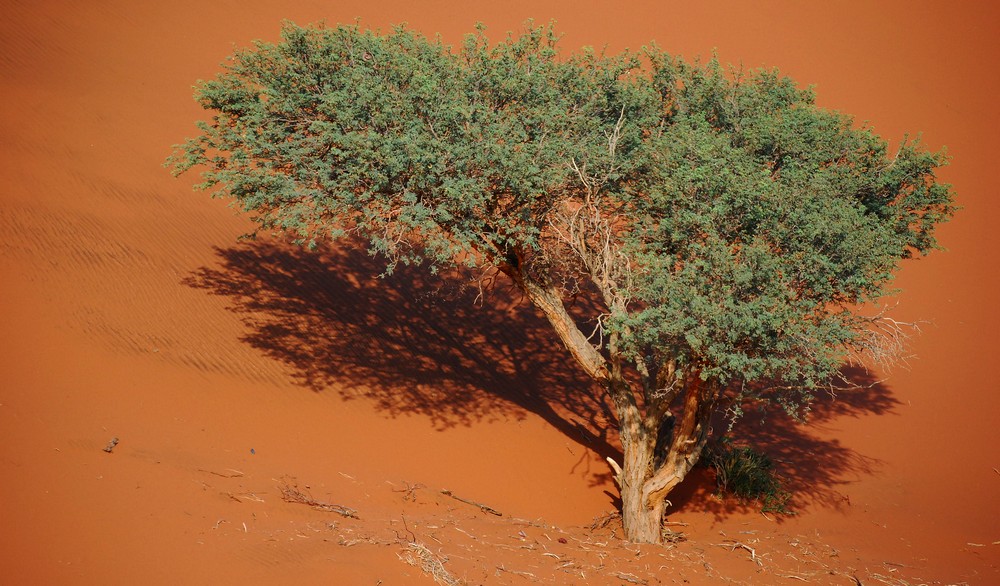 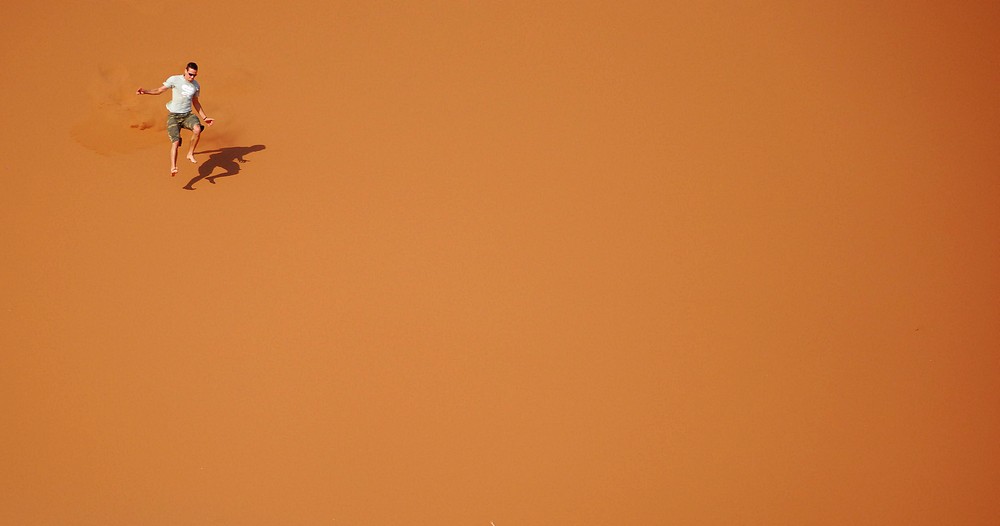 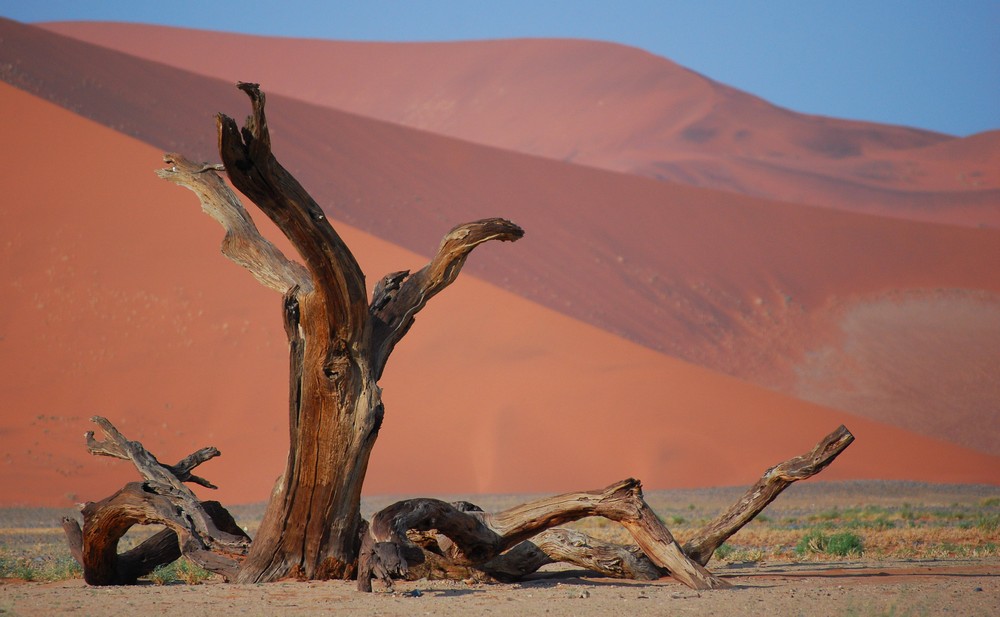 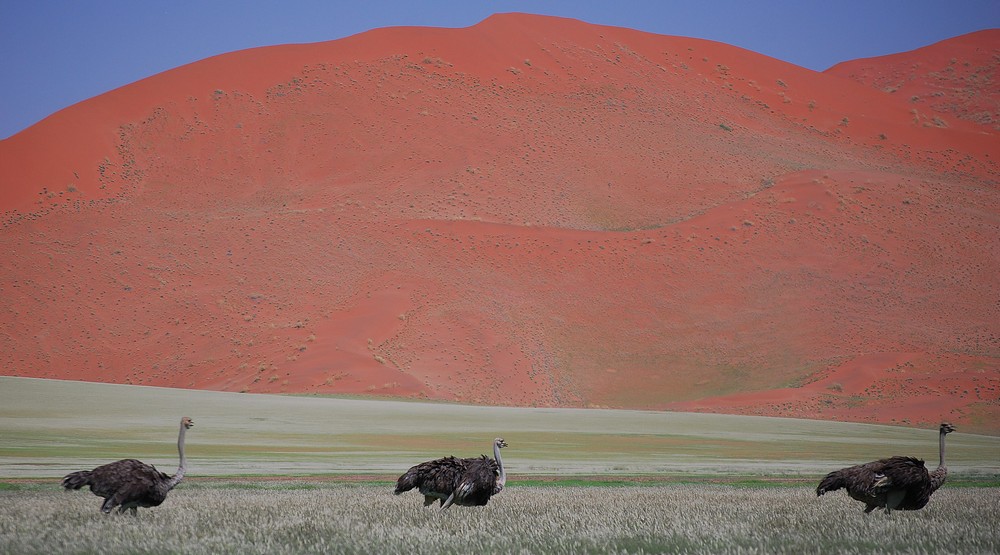