April 27th, 2011 (February 2011) – I suppose the most accurate way to describe Sesriem is with the word ‘settlement’ if by settlement I mean a petrol station and a few tourist lodges. It is a gateway to the Namib-Naukluft National Park, home to the world’s largest and most impressive sand dunes. Trust me when I tell you this is a place you want to visit.

Should you desire to stay inside the park you have two options, both operated by Namibian Wildlife Resorts (NWR). There is the Sesriem Camp Site or the ultra-swanky Sossus Dune Lodge. We went with door number one.  There are other options outside the park but only folks staying within the park’s boundaries can reach the dunes in time for sunrise. You want to reach the dunes in time for sunrise. The main gate (leading to the actual park gate) opens a bit later for the general public. Exclusivity is part of the appeal, especially in regards to the Sossus Dune Lodge. One must be careful. Exclusivity can sometimes lead to assholesivity.

After setting up camp we hopped in the Spark for a leisurely drive inside the park (rhyming was incidental). From Sesriem there is a 65 km road leading through a desert dreamscape consisting of salt/clay pan surrounded by large dunes. And at the end of the road lies Sossusvlei, the cherry on the proverbial surrealistic sundae.  Ever want to frolic in a painting?

Have I mentioned the weather? Although relatively pleasant at the campsite we could see storm clouds in the distance hovering over the dunes. The attendant at the gate entrance mentioned something about flooding and getting stranded but did not seem to be overly concerned about the likelihood of such so we pressed on. It was not long before we encountered heavy rain forcing us to slow our pace a bit. Thankfully, the road into the park is paved so getting stuck in mud or sand was not possible. Flooding on the other hand….However, the shower was temporary and subsided as we continued west.

I believe that in many ways we were incredibly lucky to be there during that time (i.e. a time of atypical weather patterns). The landscape and the weather combined for a truly unique display. On one side we had copper-hued sand dunes looming nearby and on the other the dark craggy silhouettes of small mountains straddling the edge of the park like dark centurions. It felt a bit like some sort of geological standoff, a topographical fault line delineated by seemingly delicate strands of swarthy emerald silver-tipped grass. The ashen-colored firmament only served to augment the bizarre contrasts of color and helped underscore the ominous nature of the scene. You could almost hear the clarion call in the distance. A rare scenario indeed. And best of all we had the moment to ourselves.

We continued into the level valley dividing the dune sea on either side. Before long the clouds had disappeared and we encountered the desert backdrop one would expect, a sun-drenched sandscape devoid of vitality….almost. There was still a hint of life with the occasional springbok here and there and the existence of trees and seemingly random verdure speckling the canvas. Nothing about the region seemed quite right and almost felt as if the creative force behind the construction misread the schematics. Desert. Green. Sand. Trees. Rain. Where the hell were we?

And then I did something as inexplicable as the landscape. I drove off the pavement into hard pan surrounding the road. This was incredibly asinine, not because we might get stuck (I was convinced otherwise), but because I had just driven off road in a national park. What could justify such insensitivity?  Well, nothing but there is an explanation (not to be confused with a justification).  Having been in desert scenarios before (Bolivia, Tunisia, Mauritania for example) I guess I had a false sense of freedom that often accompanies a journey to such places. There were sporadic signs reading ‘Stay On The Road’ but they were few and far between which I, albeit mistakenly, interpreted as applying to the area in and around the signpost. And as I saw nary a trace of vegetation that could be potentially damaged at the site of my detour I honestly believed such deviations were permissible. Otherwise I seriously doubt we would have parked the car, erected a large multi-colored beach umbrella, and savored peanut butter and jelly sandwiches amidst a breathtaking and surrealistic desert backdrop all within a few hundred meters of the road. Stupid? Clearly. Defiantly insolent? No way.

After all, do you think I want to live up to the obnoxiously douchey American tourist stereotype? Negative ghost rider.  I have a deep seated respect for nature and its preservation so I can say honestly I thought my act innocuous. The Namibian couple employed by one of the lodges that approached us soon after rejoining the road did not. To say they were dripping with disdain and contempt does not remotely describe their disposition. If looks could kill I would be dead….along with every living relative of mine. What started as, ‘What do you think you are doing?’ quickly devolved into a crucifixion of our moral fiber. I offered no protest and apologized repeatedly. My ridiculous hat and vapid countenance most likely did nothing to quell their vitriol.

I understood their sentiment and honestly felt terrible but then Mr. Contemptuous said something that diluted the gravity of their tone just a tad. He looked at me with a straight face and asked, ‘Do you realize those tracks will be there for a thousand years?’. A thousand years? Okay buddy, I get it. I’m an asshole but let’s not go too far. We were then informed that such transgressions carry a fine somewhere in the neighborhood of $500 US and that we had better be careful not to do such a thing again. I thought they were going to report us, an action I would have completely understood. Instead they merely kept repeating how much trouble we could get into if we were caught which, if I am not mistaken, implies they would not report us. Guess what they did? Fair enough but if we knew this to be their course of action we would have happily followed them back to the ranger shack and owned up to our actions. Follow your conscience. Do the right thing. No need to be an unctuous prick about it.

After tracing the road to its end we turned around and headed back towards the campsite. Along the way we were stopped by a white truck driven by a park official. Instead of asking if we were the douchebags in question he asked if we were the only small white car in the area (this quickly lead to our unmasking). Consequently, we followed him back to his office, admitted our guilt, and received a stern lecture.

Luckily, our only punishment was a warning. No fines. No expulsion. I discovered that their main reason for the prohibition is aesthetics, not irreparable damage. I agree with the policy. The restriction applies to vehicles, not people so if we had parked on the side of the road and walked a bit in order to stage our surrealist picnic then no problem (Thousand year footprints?). They don’t want vehicle tracks crisscrossing the landscape. Perfectly understandable. This, however, does not apply to Soussusvlei where you are not only allowed to drive your 4wd but if you do not have one park employees will shuttle you around in theirs. Yes, I am a dipshit just not quite the colossal dipshit I originally believed. Baby steps. 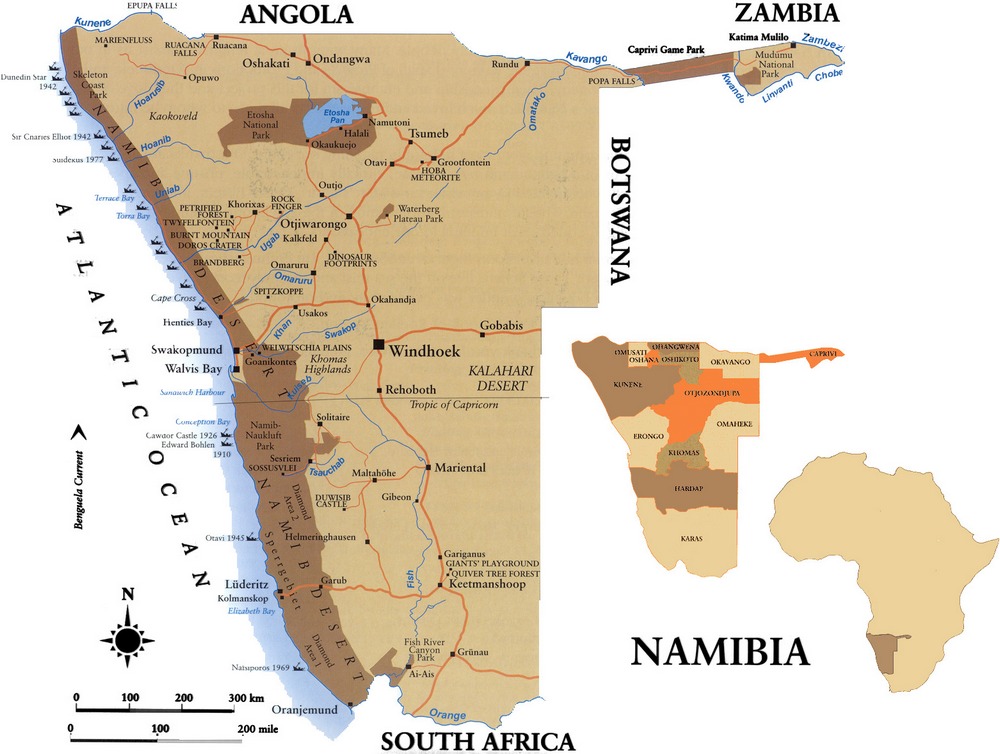 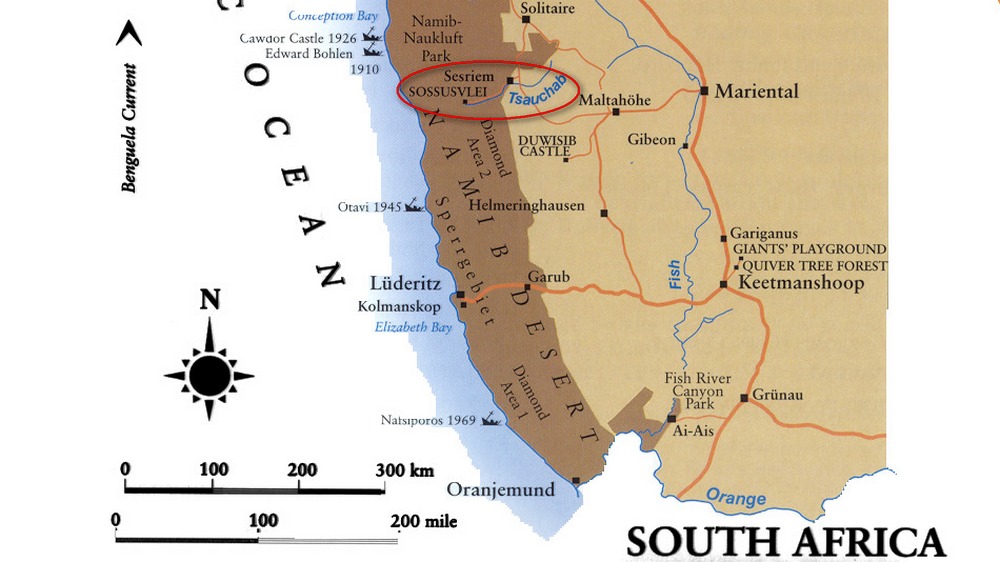 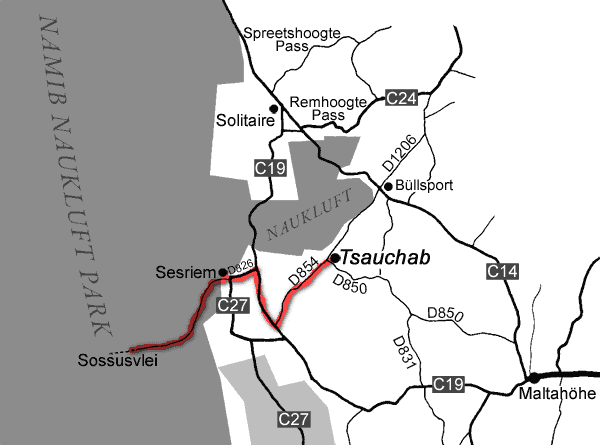 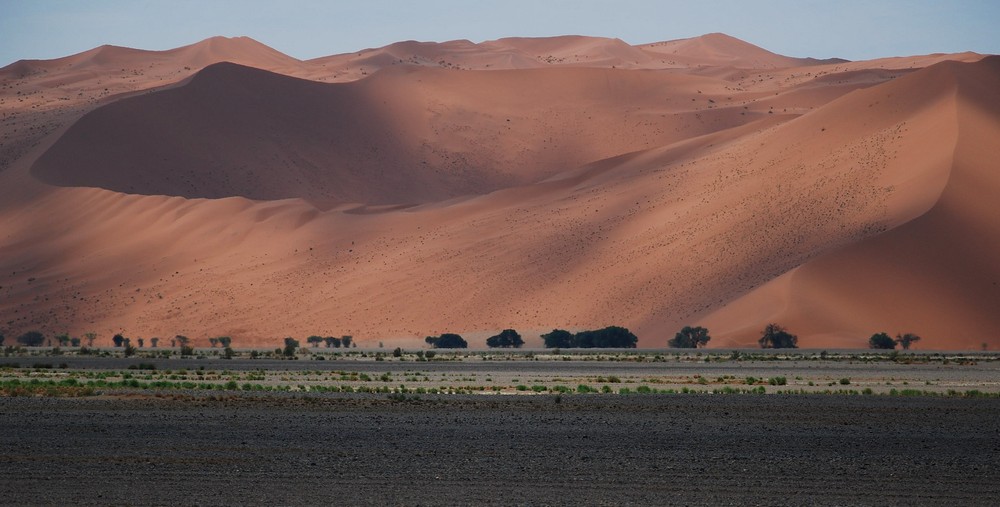 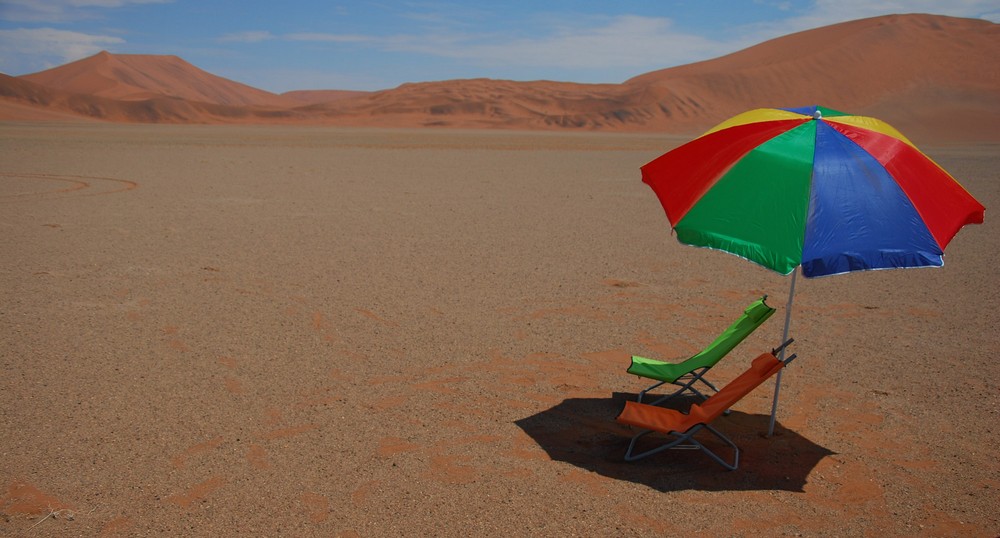 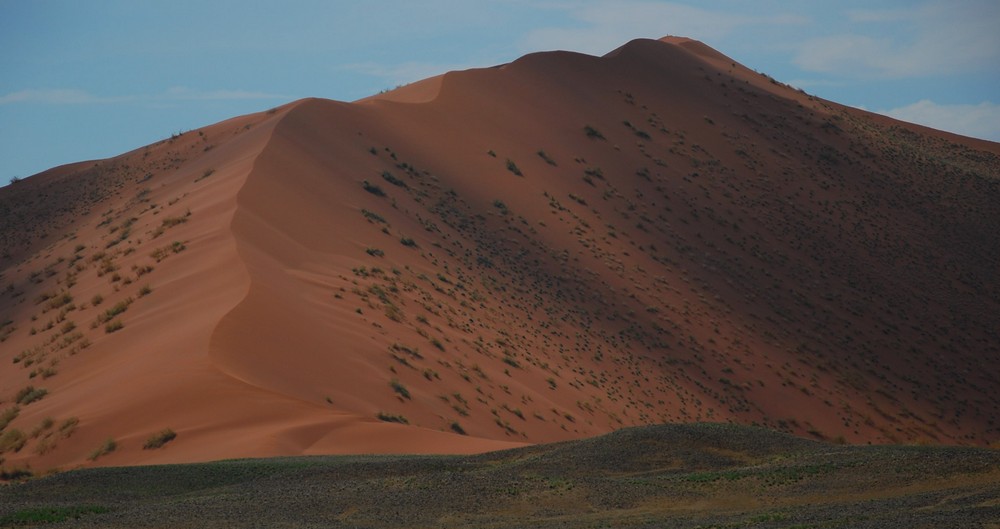