March 28th, 2011 (January 2011) – It took a little while to get used to driving….again. The driving lane, gear box, and steering wheel are on the wrong side (as opposed to America where everything is on the 'right' side.*). Throw in Johannesburg traffic, nonfunctioning robots (i.e. traffic lights), and a general feeling of confusion for a relatively stressful driving experience. Builds character. 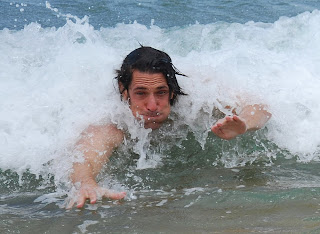 Getting around Jo'burg is a pain in the ass. Why? Well, when you design a city with apartheid in mind you tend to layout a series of semi self-contained areas with no real center, notwithstanding the business district which you don't want to visit anyway. As a result I saw more Western-style malls than I could have anticipated (every area needs a shopping hub). I found this to be both surprising and a little unsettling. It felt a little like I was somewhere between Tampa and Orlando. I also spent way more time at the mall than I am comfortable with (i.e. any time at all) but it was a necessary evil and it did make locating camping paraphernalia a bit more expedient.

We first headed north to an area known as 'The Cradle of Humankind', a World Heritage Site swimming in ancient history. There was also supposedly some sort of rhino and lion park where one can allegedly frolic with baby lions….if one were in to such an enterprise….which I am clearly not on account of how cool I am….which is entirely too cool for such childish endeavors. Unfortunately, we could find no where to camp in the area. We did locate a few bible retreats and a campsite that was inexplicably closed. Probably just as well because we stopped there for lunch and I almost got my ass kicked by a group of Vervet monkeys (with their signature blue balls) seemingly hell bent on confiscating my peanut butter and jelly sandwich. This is why feeding animals is a terrible idea. They turn into aggressive assholes. And they purloin sandwiches. Diabolical.


So we moved on. We wanted to see Kruger National Park and some other areas in the north but the weather forecast dissuaded us. Even in a typical year our visit was somewhat ill-timed as the 'green season' allows animals to hide amongst the dense vegetation. That would be okay but relentless rainfall would make the trip less than ideal. We ended up stopping in Pretoria for the evening. We found a hostel in the city that has an area to place a tent. We viewed this as our trial run. It went well. We gave ourselves a good game. 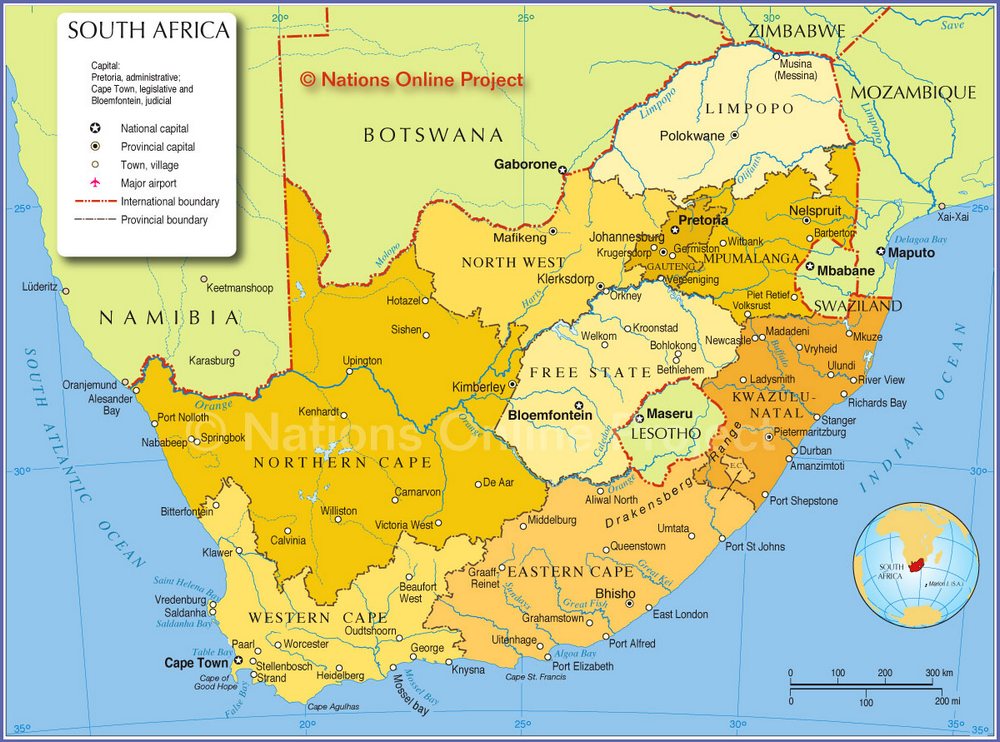 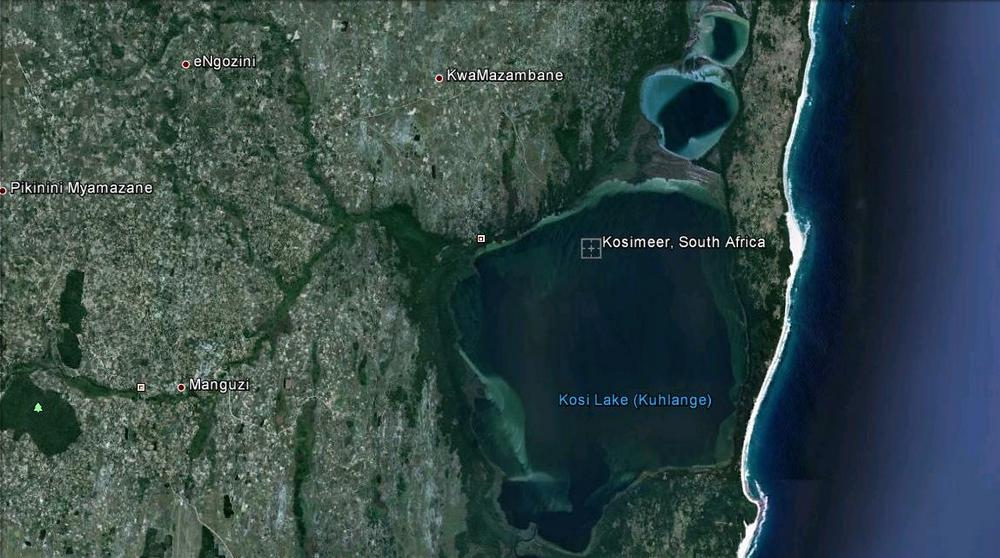 The next day we headed east. Destination: Kosi Bay. I am pretty sure that somewhere in the neighborhood of 95% of all the roads in South Africa are under some sort of construction. Hey, everyone needs new roads, right? Problem is the method of construction involves reducing long stretches (3 to 5 kms) of highway to a single lane and allowing one direction of traffic at a time. Patience is a virtue. It really is.

Of course it was not long before we understood the need for extensive maintenance. One of the roads leading to Kosi Bay was so potholed I thought we might destroy the car. We didn't. Luckily, we only managed to dislodge a hubcap. Leslie happened to notice said hubcap spinning off into oblivion which allowed us to back track and retrieve it.
Kosi Bay contains a string of four estuary lakes and 'some of South Africa's most beautiful and quiet beaches'. I have to agree with the quoted portion. We found a beautiful campground (Utshwayelo Campsite) only a peaceful 25 minute walk from the ocean through a picturesque salt marshe. It was sublime. I am sure that the time of year and the weather were two reasons for the dearth of humankind but I sense that even with lots a folks running around it might still be worth visiting. The water is the perfect temperature for swimming and the beach a great place to let your eyes glaze over and stare off into oblivion. I had another far too rare opportunity to regress. A small local boy and I spent at least hour body surfing in the waves and attempting not to choke on seawater. 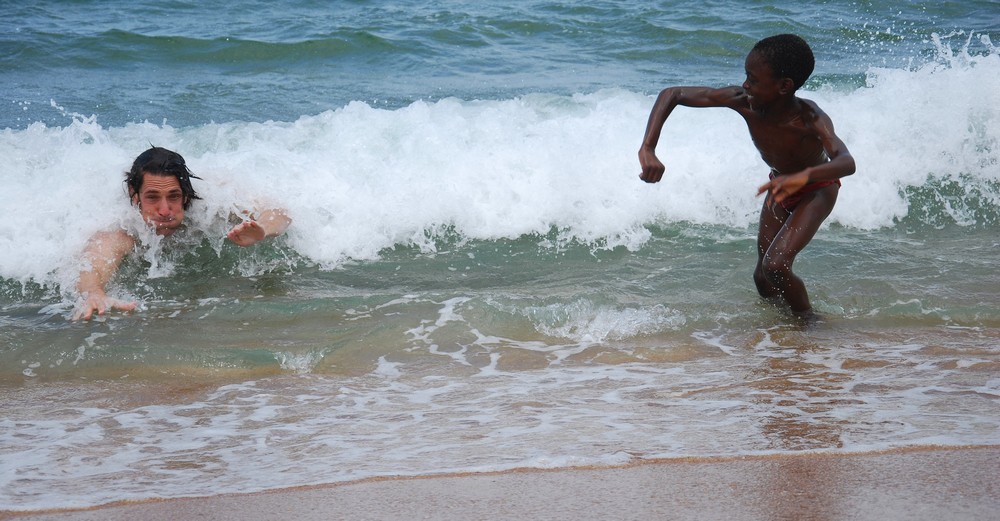 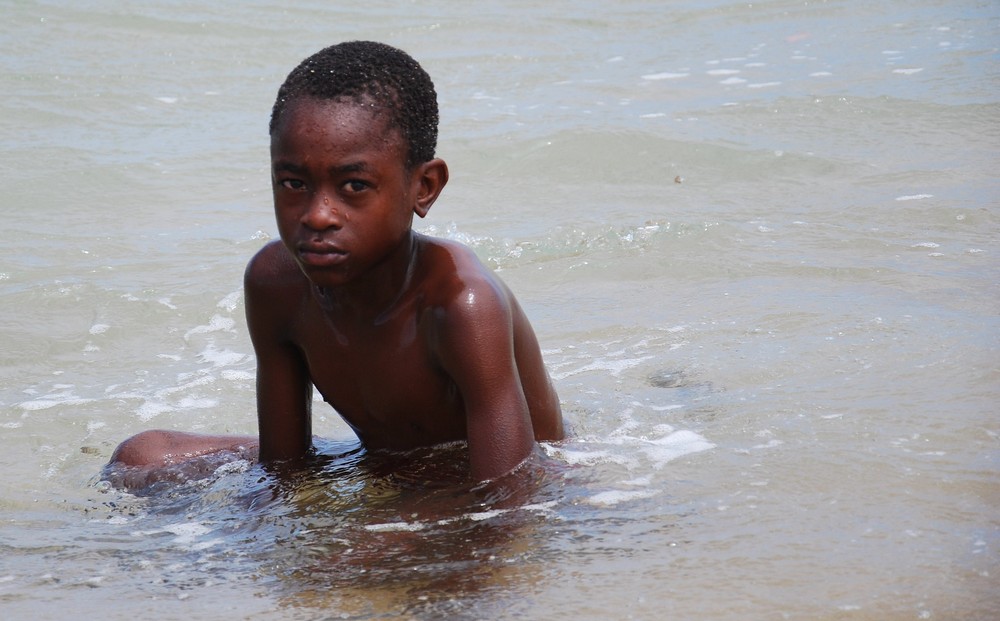 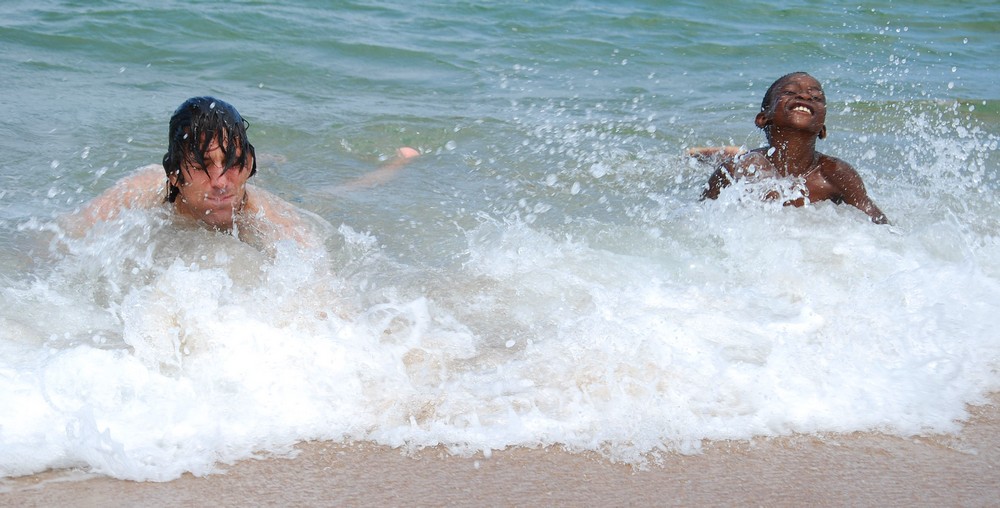 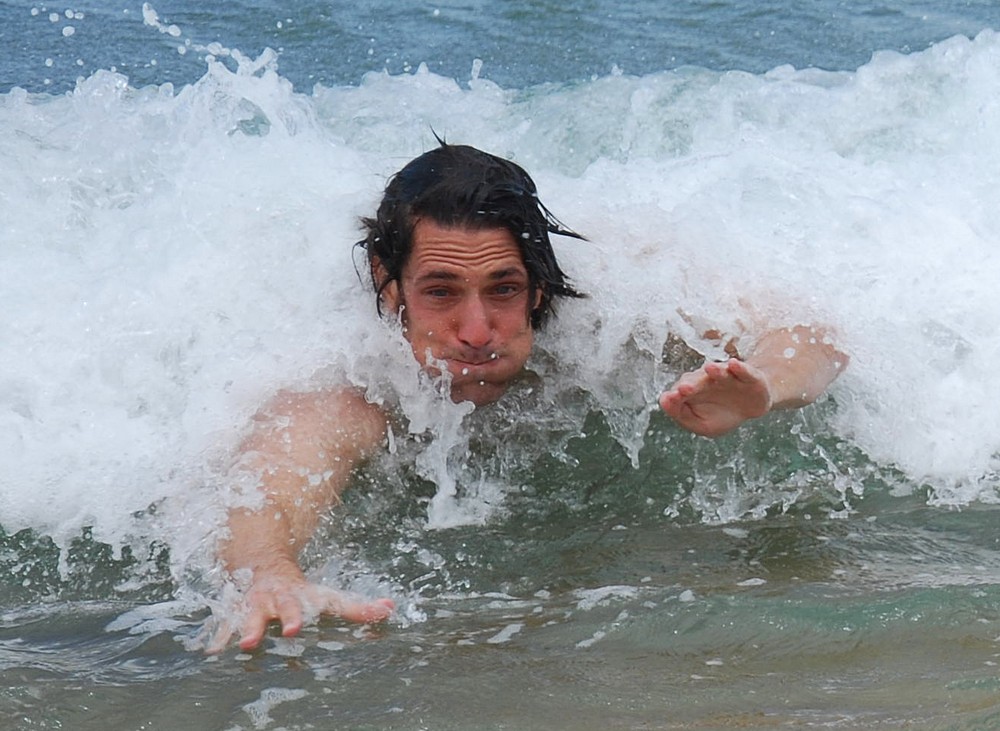 But it had a price. Although I had suntan lotion I neglected to apply any and therefore subjected my skin to the worst sunburn I have ever experienced. Normally, I am not so careless but for reasons I cannot explain I let my guard down……and burnt my ass off in the process. Leslie was also a victim of imprudence. We were both to suffer for our indiscretion for over a week. Stupid. Just plain stupid.