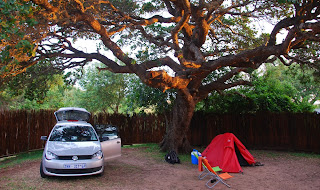 March 26th, 2011 (January 2011) - Mali in our rear view mirror. South Africa in our sights. We had an overnight delay in Addis Ababa, Ethiopia where we believed we'd be spending a long night at the airport. Nope. Ethiopian Airlines had other plans. Instead, they arranged for a room and provided transport at no charge. Ahhhhhhh. There was something so soothing about our brief experience in Ethiopia. Everyone we met (airport, immigration, hotel, etc.) was extremely welcoming and friendly. If not for our connecting flight we would have lingered a bit. Next time I suppose.

Our arrival in Johannesburg was not so auspicious. Rain. A shit ton of rain. Yes, it was the rainy season but we were to discover that South Africa was receiving abnormally elevated levels of rainfall for that time of year. Perfect. Had we done a little research we would have discovered this fact. We had not felt even a drop rain while in Mali. I kind of missed the rain....like the desert misses the rain. I like rain. Actually, I love the rain....except when it starts to reach Biblical proportions. Then its kind of a pain in the ass.

We spent a fair amount of time at the J' burg airport attempting to locate suitable lodging. After a bit of research we phoned a guesthouse and arranged for them to pick us up. Is it wrong for guest house employees to make you feel like you are intruding? Yes, I think it is. The room was nice enough and we had access to a kitchen but we felt like the annoying aunt and uncle that shows up unannounced. The owner was in town and had a group of friends and acquaintances there. She was semi-cordial but her posse behaved as if we smelled.

We went for a stroll in the neighborhood to have a look. As we walked all that we had heard and read was streaming through our consciousness. Apartheid. Racism. Black. White. Jo'burg is known for crime, especially in the car-jacking realm. We knew that there were some no go neighborhoods in Jo'burg but we believed the area we were in was safe. However, we did feel a little uneasy and the vibe was difficult to gauge. Leslie believed it had a quasi-East L.A. feel to it. Yes, it was predominantly black and we stuck out, way far out, not so much because we are white but because we were obviously tourists. We visited a market, picked up some fish and chips at a food stand, got followed by local looking for loose change, and returned to our guesthouse.

When we asked the owner if it was alright to walk around her reaction was 'ehhhh, I wouldn't.' Good time to find that out. She was living in the Netherlands because she did not want to raise her daughter in Jo'burg. I must point out that we never had a problem for the duration of our trip in Southern Africa (to include Namibia and Botswana) but we did encounter some folks (yes, they were white) who behaved as if they could be murdered in their sleep on any given night. It became increasingly difficult to assess reality, especially in light of our mostly positive experiences.

We decided to find another place to hang our hat and soon found a backpacker oriented hostel named Gemini. Let's just say it was less than impressive. I understand it was the slow season and standards may slip a bit but this place was extremely unpleasant. I am going to use the word shithole. Our room was dark, depressing, and full of insect life. The communal kitchen felt neglected and the rest of the facilities adhered to a similar decorum. After spotting a rat in the kitchen while cooking dinner we decided to vacate the following day. Don't get me wrong, I love rats just not in the kitchen. They did have a free shuttle to the mall. Yippie.

While being driven from one guesthouse to the next our black South African driver expounded upon the failure of Nigerian immigrants to contribute meaningfully to society. In fact, according to him, you will never see a Nigerian doing any type of work and pointed out that they are responsible for a disproportionate amount of crime in the city. Uh-huh. All this as we passed through a predominantly Nigerian neighborhood.

We finally landed at a pleasant guesthouse in a decent neighborhood. And by 'decent neighborhood' I mean one where every home is sequestered behind a formidable wall protected by electrified fencing and monitored (as in patrolled) by a security company that employs armed guards more than willing to show up on a moment's notice and blow your fucking ass to smithereens. Mister Rogers would not approve.

To make a long boring story short we spent a week or so in Jo'burg planning our assault on Southern Africa. We wanted to rent a 4WD Toyota Hilux with a pop-up camper in the bed. We ended up with a Volkswagon Polo Vivo and a tent. The rental rate, price of fuel, and liability not covered in the rental agreement steered us away from the 4WD. In reality all you need is a 2WD and a positive attitude. 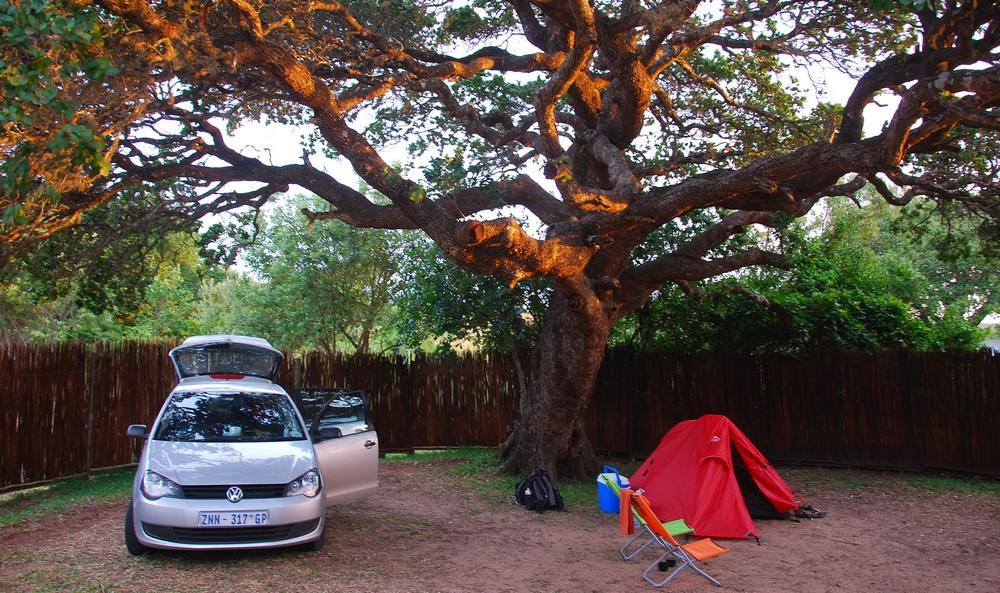