May 17th, 2011 (March 2011) – It would be reprehensible to spend all that time meandering through Southern Africa and not make an effort to see the largest waterfall in the world and one of the Seven Natural Wonders, Victoria Falls. One might even say criminal. So we made it a point to do so. It then boiled down to a matter of logistics.

Driving from Maun to Kasane (northern Botswana) would have tacked on a few hundred kilometers to Sparky. Not good since it was clear at that point that we were going to demolish the ceiling limit on our allowable kilometers for the month. Neither did we relish the thought of all that extra driving over less than stellar roadways. We decided to give Sparky a respite. It was time to take to the air.

The flights from Maun to Kasane are inexpensive (around $60 US one way) depending on the time of year. Just make sure to specify that you would like to pay less money as opposed to more. When we visited the Air Botswana office at the airport in Kasane to inquire about a return flight to Maun we were quoted a much higher fare than we had received on the flight in. After considering different departure dates the woman behind the desk finally asked us if we would like the ‘special rate’ (i.e. cheaper). No, no. We were hoping to pay the highest fare available…if you don’t mind. Are there any seats left at that the ignorant tourist rate? Good, good. We’ll take that. Would you mind expediting the procedure? We need to hurry back to our hotel so we can burn the rest of our savings. Alrighty then. Thank you so much. I think I’ll go outside and fuck myself now.


Kasane is located near what is known as the ‘Four Corners’ of Africa (Botswana, Namibia, Zambia, Zimbabwe). It is a popular starting point for many a trip to Victoria Falls, located within the borders of two countries, Zambia and Zimbabwe. The village of Victoria Falls lies on the Zimbabwean side and was once the tourist hub for exploring the falls. This changed when the president of Zimbabwe, Robert Mugabe, went dipshit mental, instituted a nutty land redistribution policy, destroyed the economy, and destabilized the country like it was his job. Inflation was so out of control the government at one point started printing 100 trillion dollar bills (they now use US dollars). As you might expect this scared all but the most die-hard tourists away. Things have improved but in the interim the city of Livingston (Zambian side) quickly developed significant infrastructure to compensate.

We chose the Zambian side as we knew crossing into Zimbabwe (where most of the falls actually lie) was merely a hop, skip, and a jump across the bridge. What we did not realize at the time was the expense incurred by doing so. Getting to Livingstone? Easy Peasy Japanesey. Take a taxi to the Zambezi River followed by a short boat ride and another taxi ride to Livingstone. It is $50 for a single entry visa if you want to remain for more than one day (otherwise you can get a $20 visa for a single day) and $80 for a multi-entry visa. This is important because if you want to cross the bridge into Zimbabwe to see the other side of the falls you would be wise to purchase the multi-entry visa or you will have to shell out another $50 to get back to Zambia. The visa to Zimbabwe is also around $50 bucks or so. At a minimum you will drop $100 bucks to cross either border and spend more than a day in the area. Money, money. mooooooooneeeehhhh!! This could change at any time depending on anything from new border regulations, whim and fancy, or a random coin toss. Either way bring a camera and an irresponsible financial attitude when heading to VF. 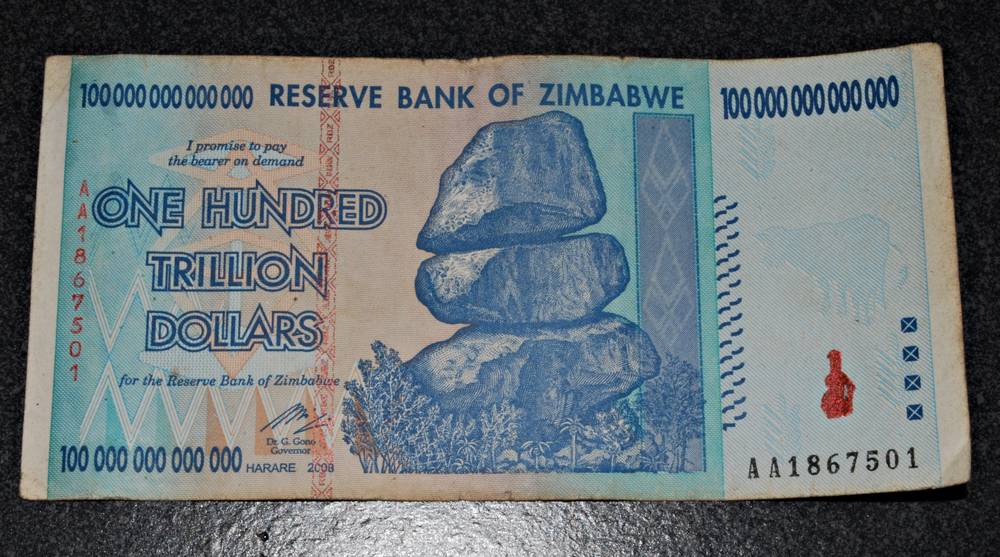 Livingstone is named for David Livingstone, the first European to lay eyes upon Victoria Falls (which he named after Queen Victoria). And yes, it is that Livingstone as in “Dr. Livingstone, I presume?’. It is not a bad place to base one’s self and there are plenty of hotels as a result of Zimbabwe's recent tumultuous past. It also happens to be the best budget option.

We arrived at the entrance to the falls not long after 6 am in anticipation of a crowd. Not only were there no tourists the park office was empty and locked. Huh. Slow season. Eventually, a truck dropped off the employees and we entered. March is the slow period as the rivers have swelled from all the rainfall. Vic Falls is, well, angry at this time of year. The indigenous name for the falls, Mosi-o-Tunya, literally means ‘the Smoke that Thunders’. When we were there it was thundering its balls off.

A few weeks later and the mist would hide most of the falls from view but at the time we were there it was, too me, a perfect combination. Many prefer to view the falls during the dry season when the Zambian side withers and folks can actually walk across the edge all the way to Livingstone Island. Ideally, you really need to visit twice to truly appreciate both views but if I had to choose I would go when the falls are nearly at full force and borderline deafening. It is stupefying.

We forked out the dough for a boat trip to Livingston Island for a look around and a private breakfast (yeah, we’re that important). After donning rain gear our guide took us right to the edge of madness and let us peak over. It was truly awesome and forced my heart to skip a beat or two.

Later we entered the bridge that spans the Zambezi River between Zambia and Zimbabwe for yet another view of the falls. No visa required to enter the bridge. Actually, we could have easily left and reentered Zambia quite seamlessly as no one really appeared to be paying attention. And if someone does happen to notice simply feign preoccupation and act stupid. Works for me. 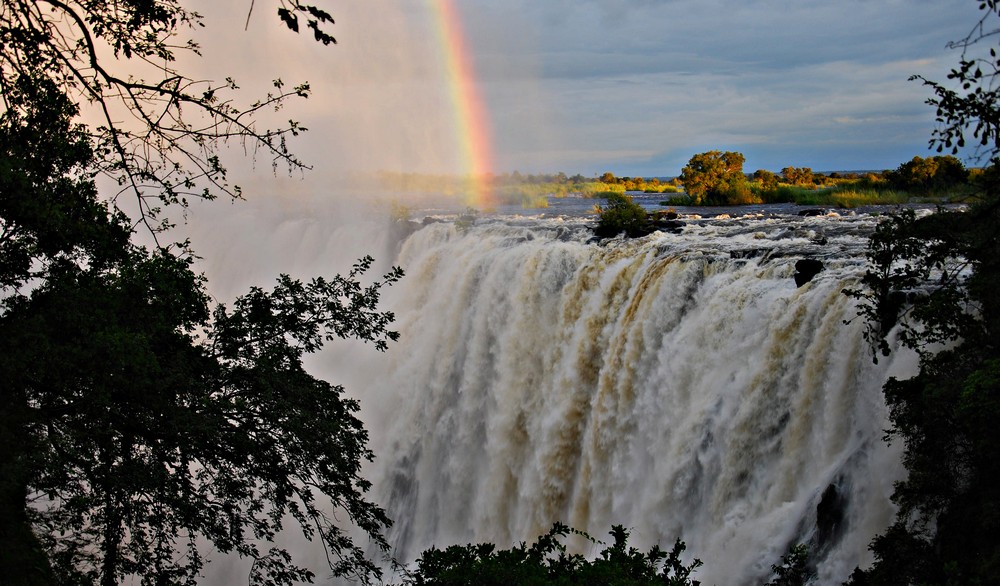 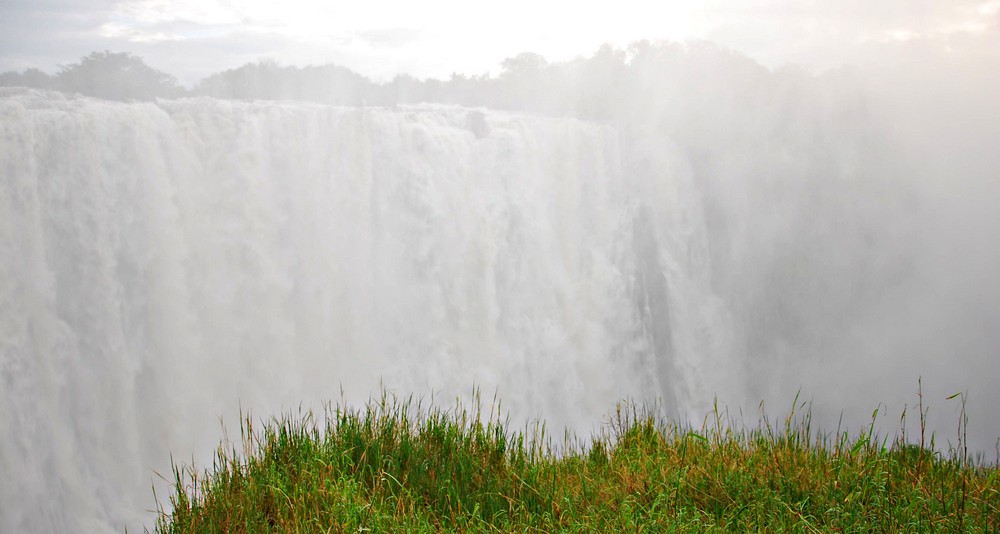 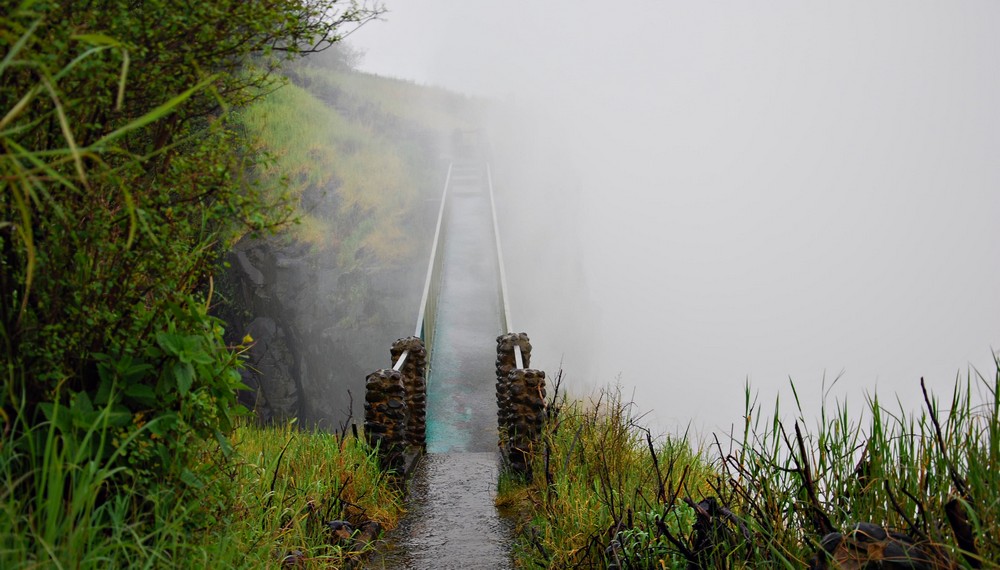 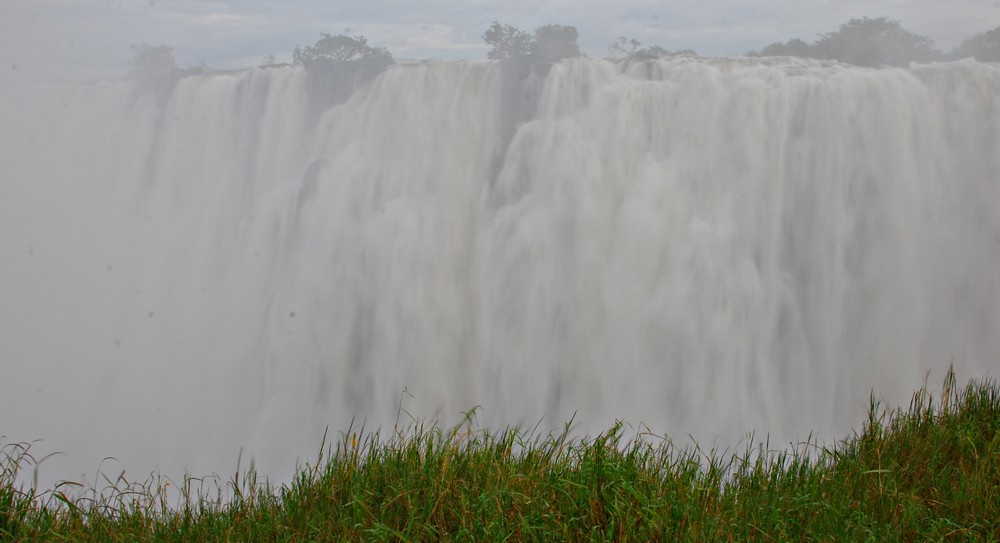 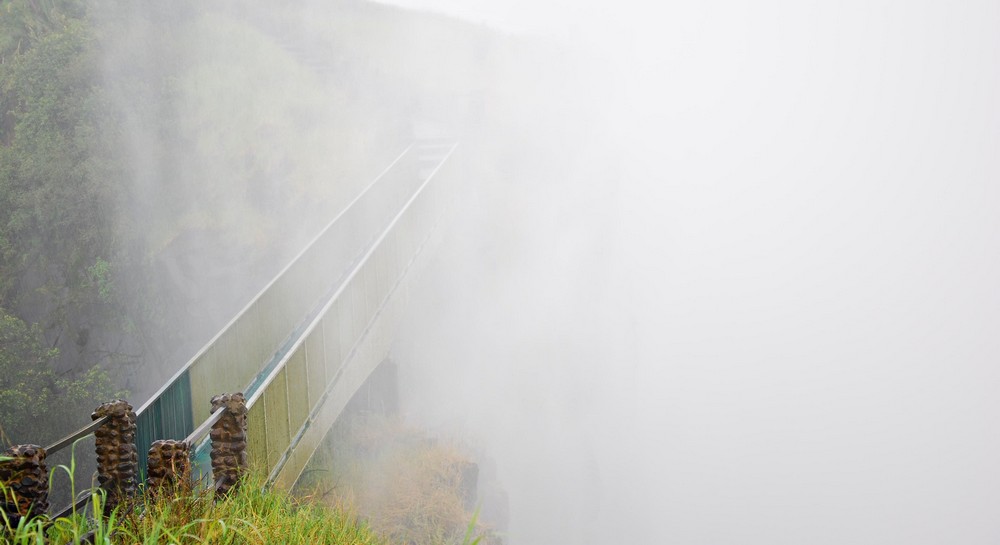 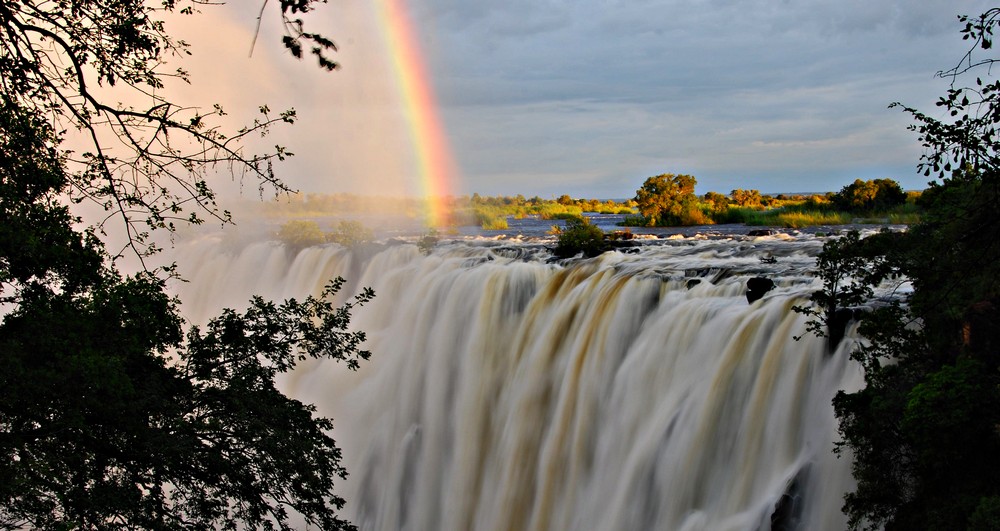 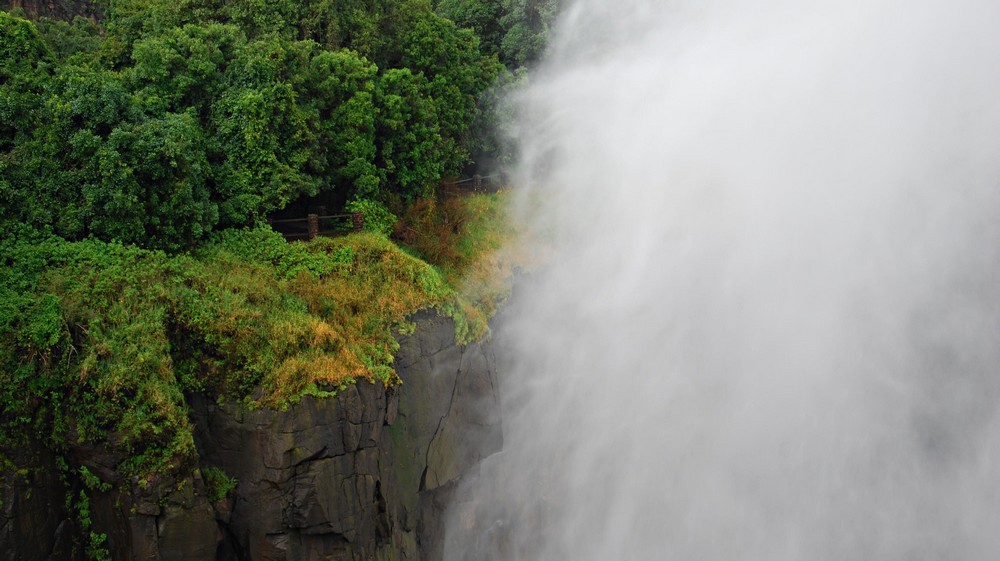 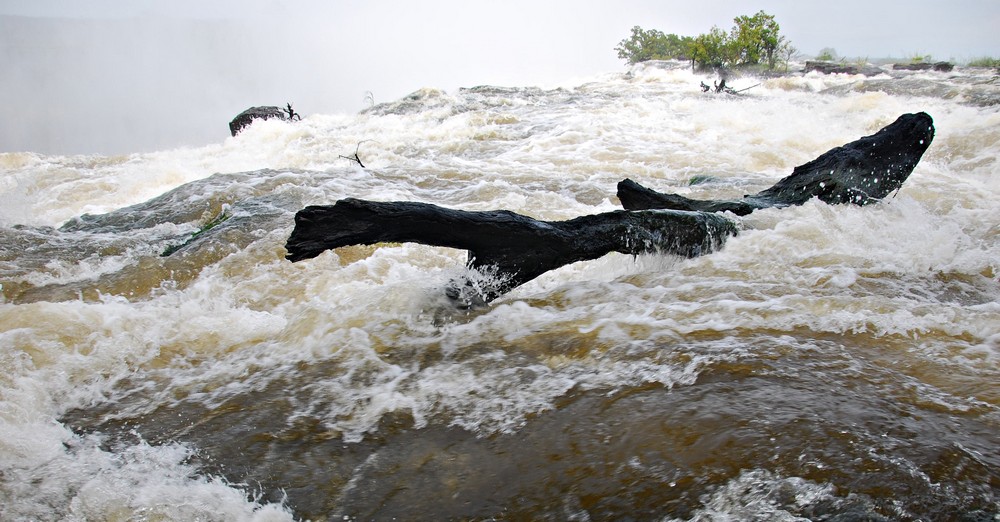 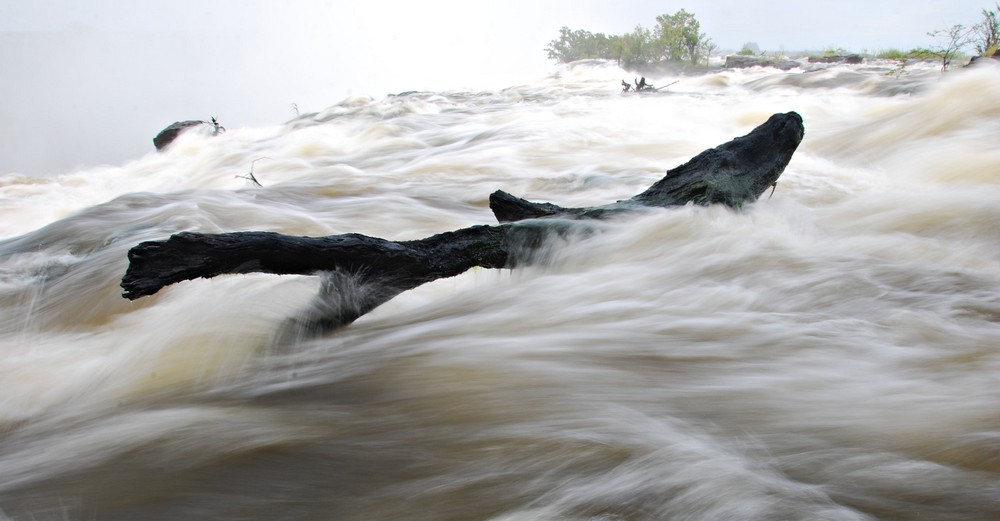 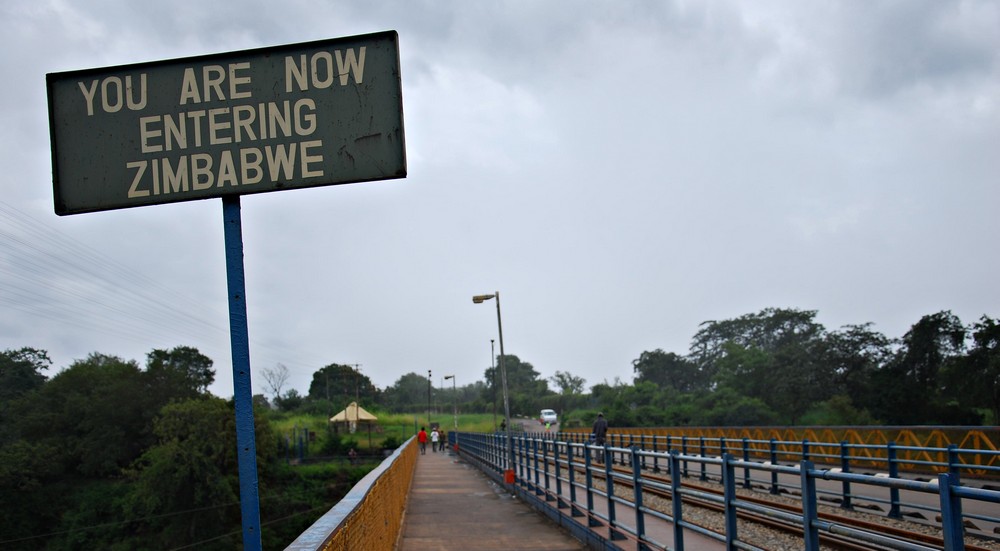 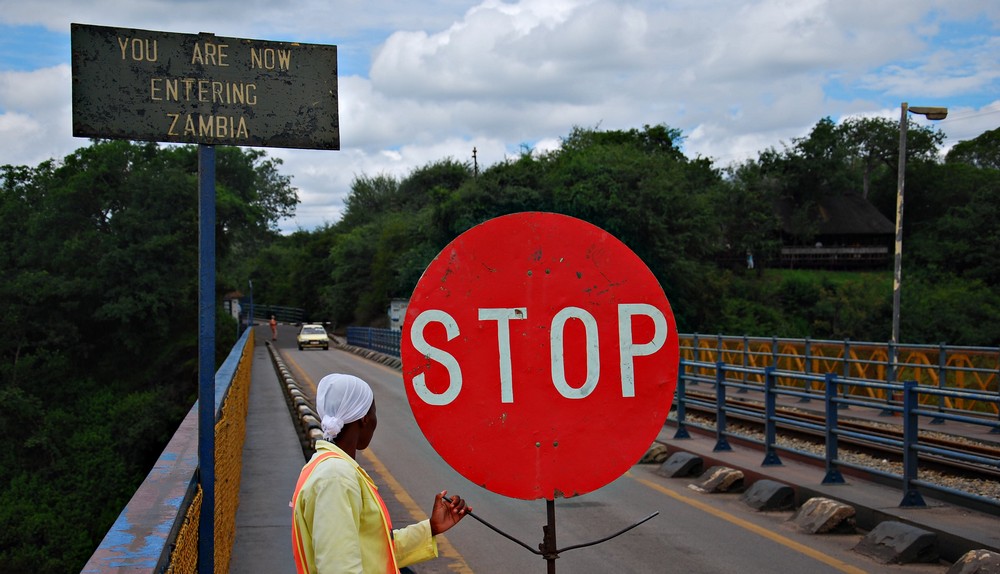 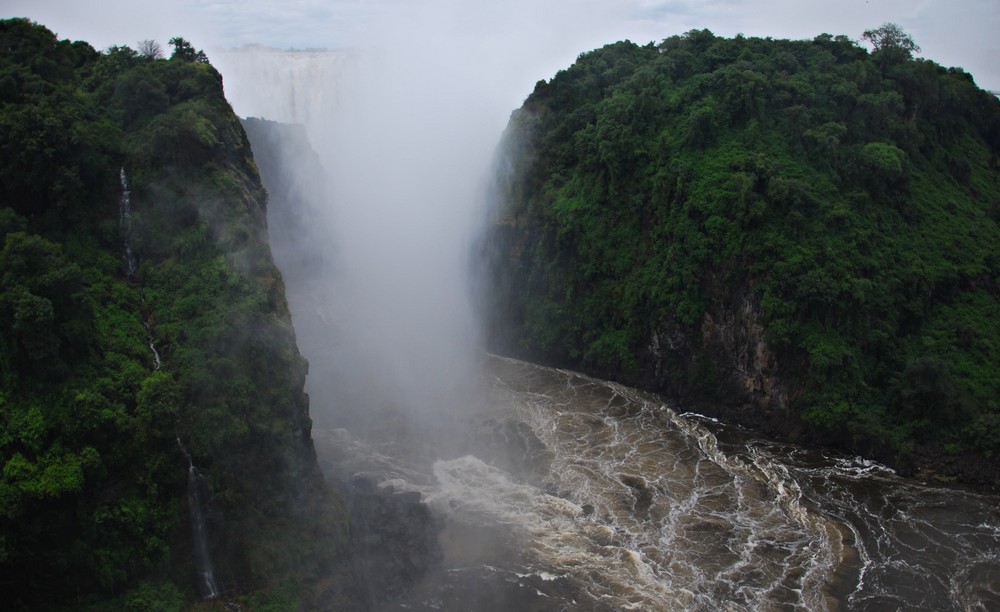 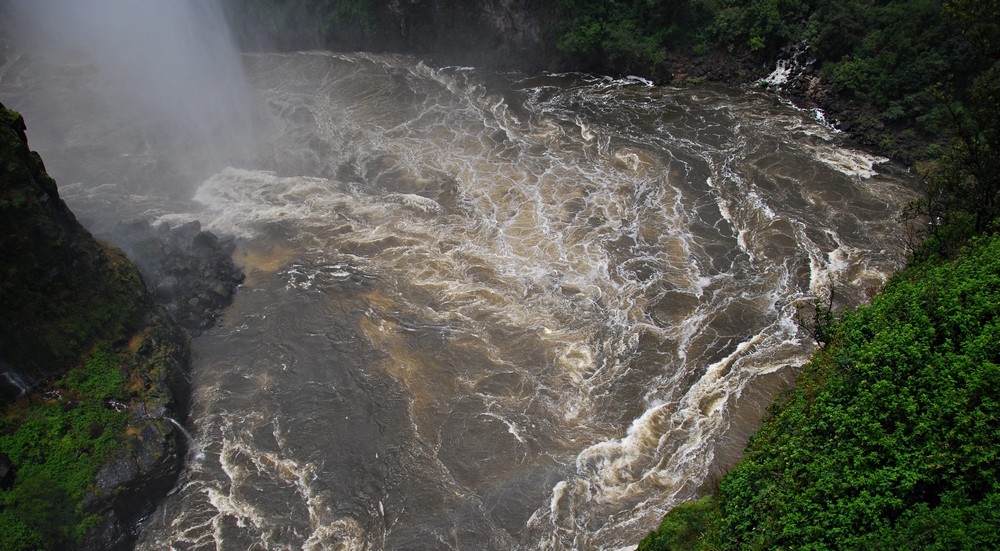 And then came the grand finale, an experience that almost wasn’t. Just about any activity imaginable is available near Vic Falls. Bungee jumping, river rafting, river boarding, abseiling, fishing, horse-back riding, helicopter flight, etc. You name it. Want to molest a rhino? I’m sure it is feasible. They also offer microlight flights over the falls. I’ve always wanted to give this a shot and I could think of no better place to do so then Vic Falls. Problem is it is rather expensive, $120 US for a 15 minute flight. Ouchie! I oscillated back and forth knowing deep down that resistance was futile. I simply had to know.

One word: Wow. Abso-f***ing-lutely amazing! I went in the afternoon of a clear day and drifted above Vic Falls like [insert trite bird analogy here]. There is not a whole lot between you and the Almighty so if heights are not your thing you might want to take a pass. My German pilot had made thousands of flights and behaved like it was his first time as well. I understand why. Thankfully, 15 turned into 20 minutes and I appreciated every one of them. This was not on my bucket list but it most certainly should have been. When I returned to earth I informed Leslie that it was worth every penny and would be a travesty to leave without going for it. She went for it. She agreed. You'd be an asshole not to do it. Don't be an asshole. 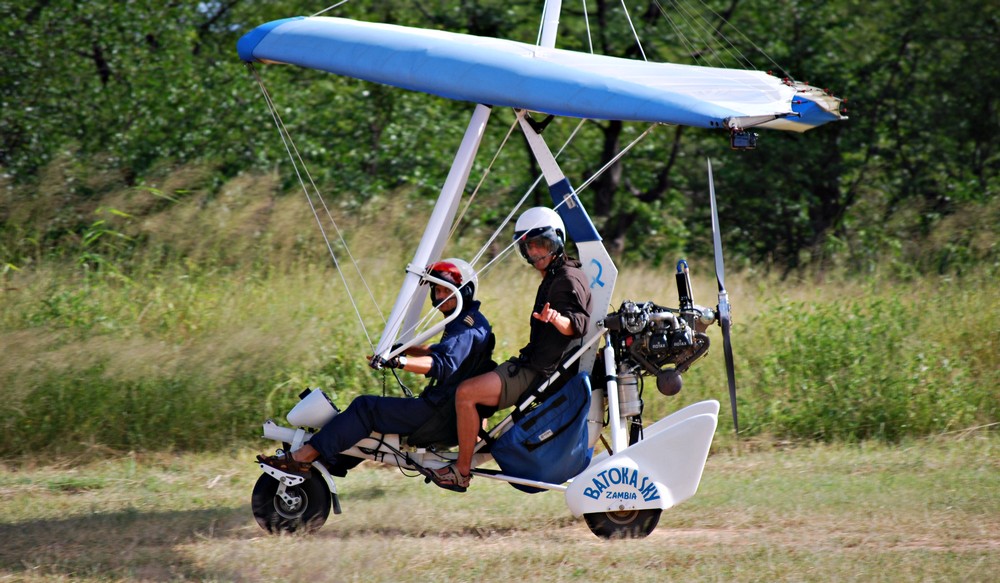 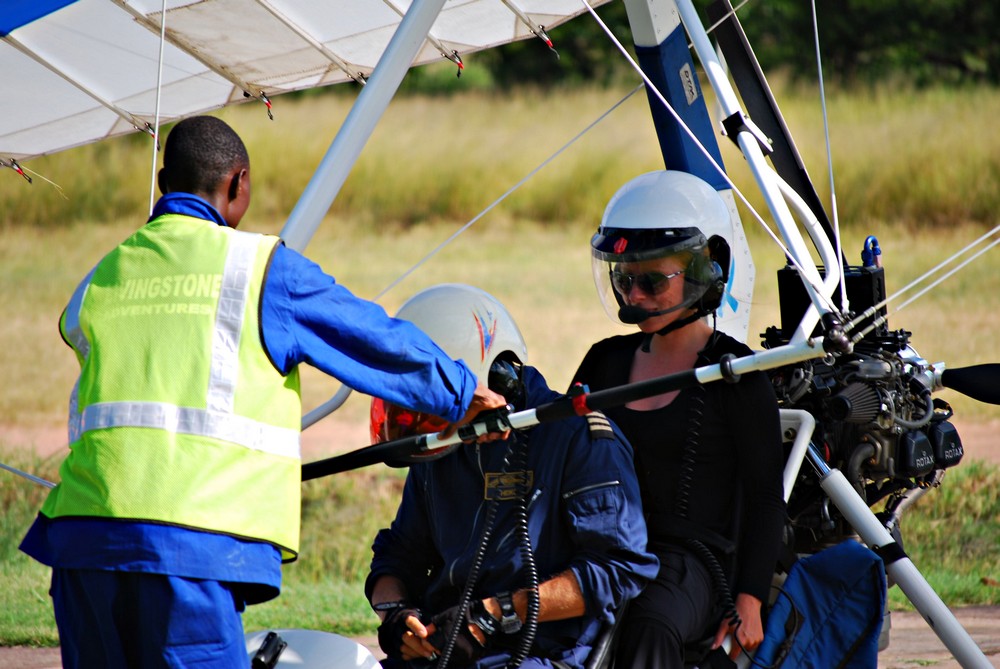 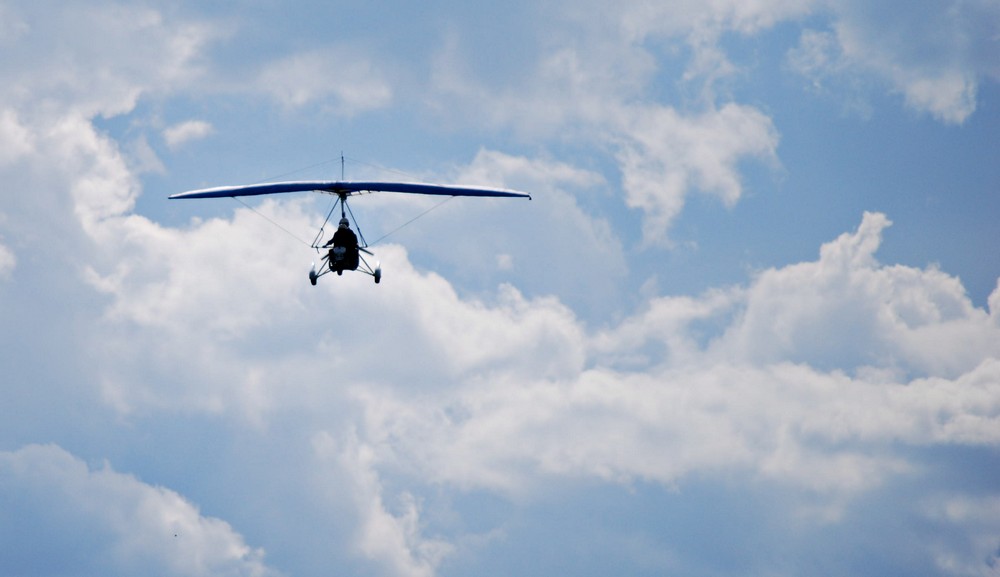 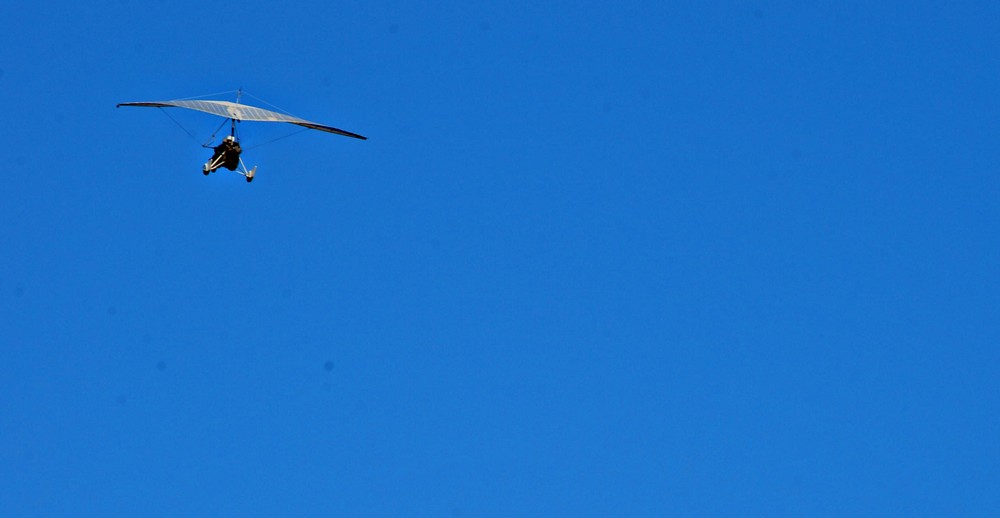 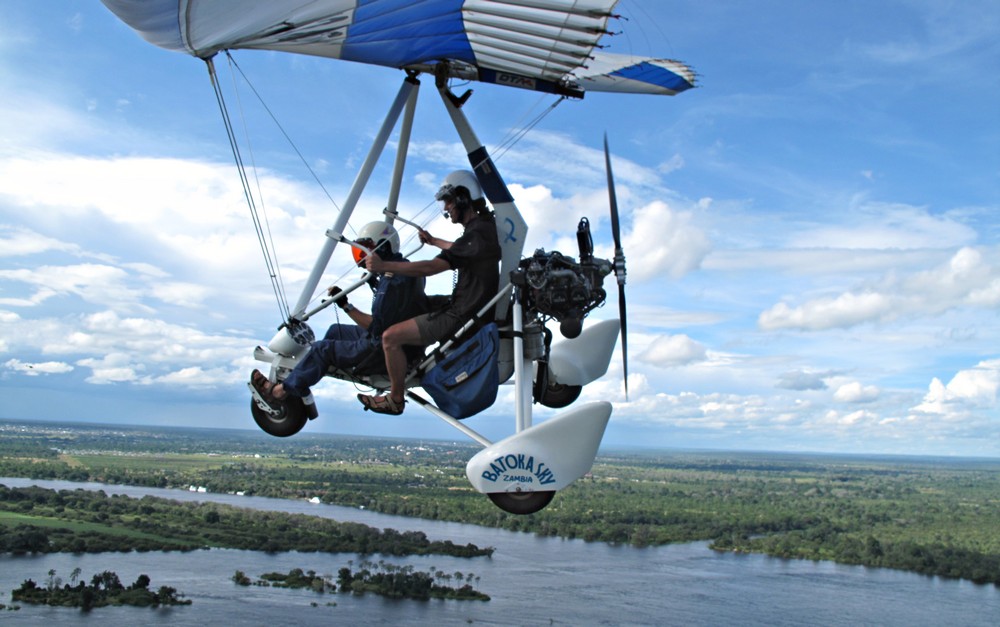 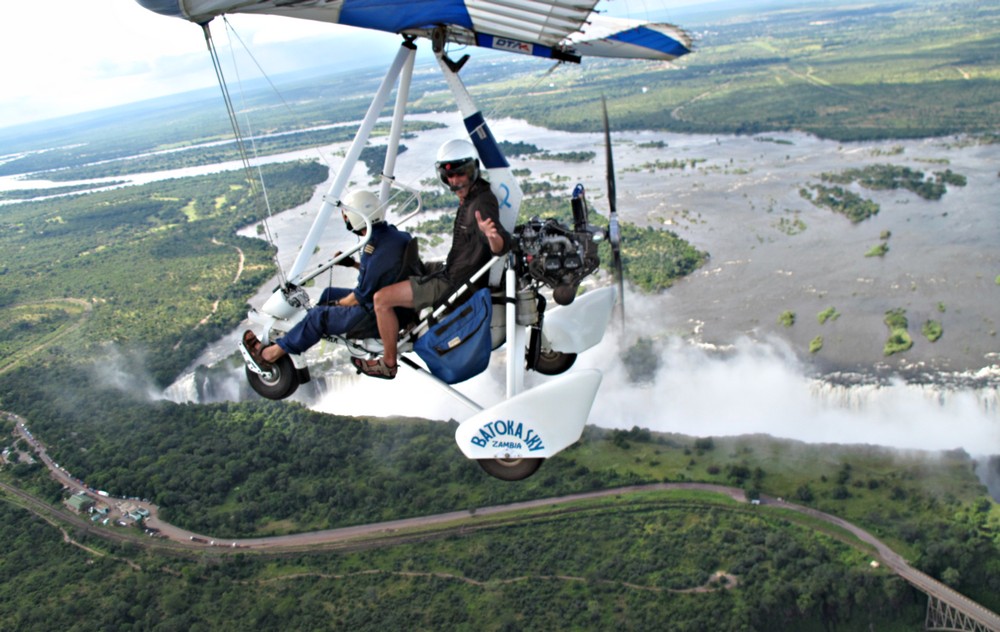 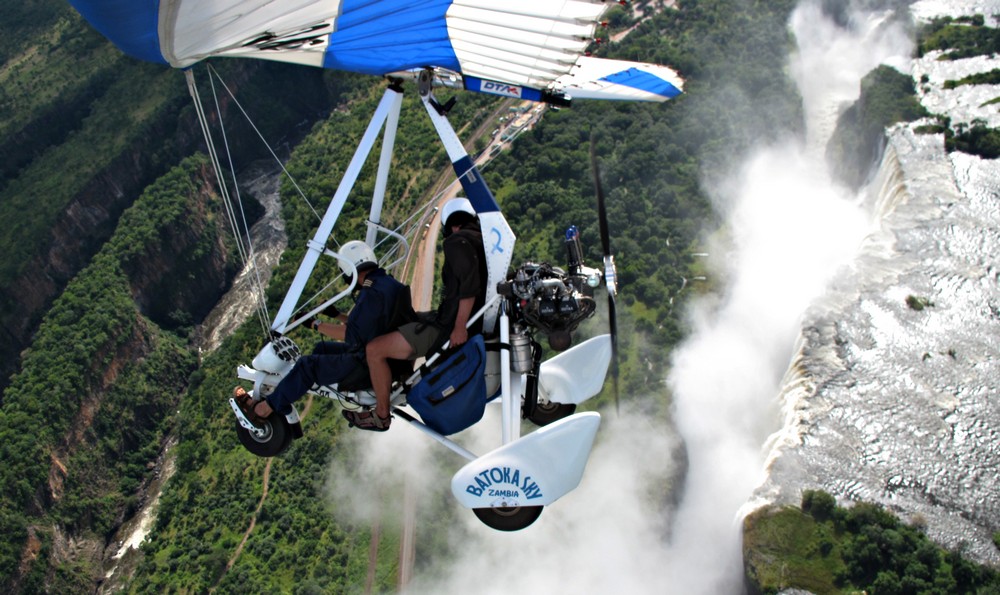 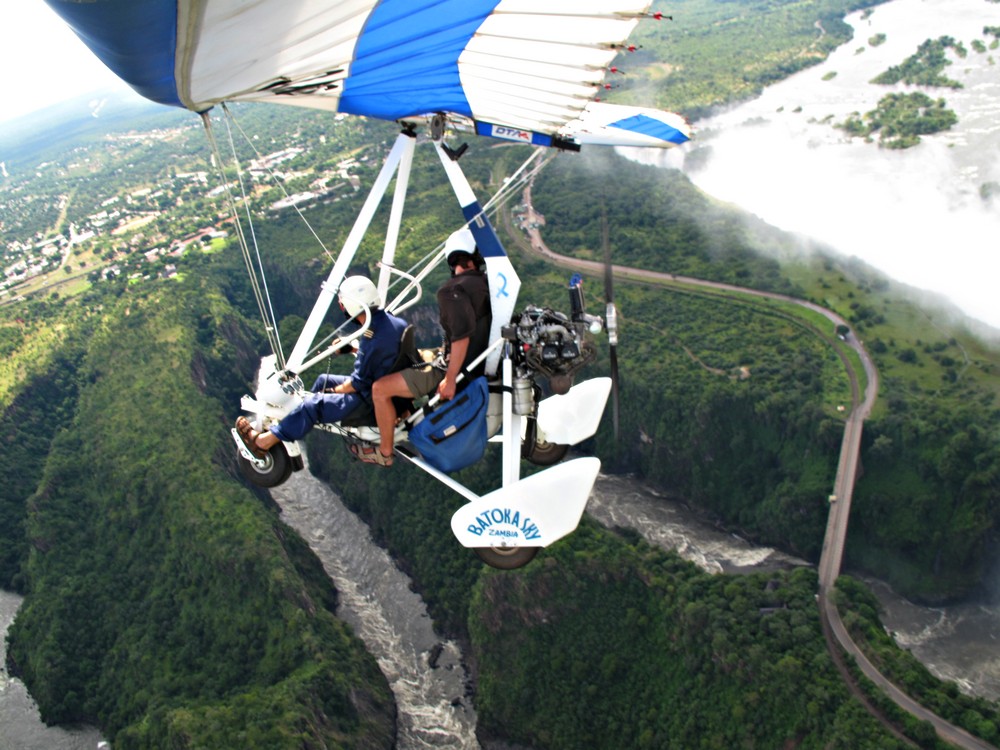 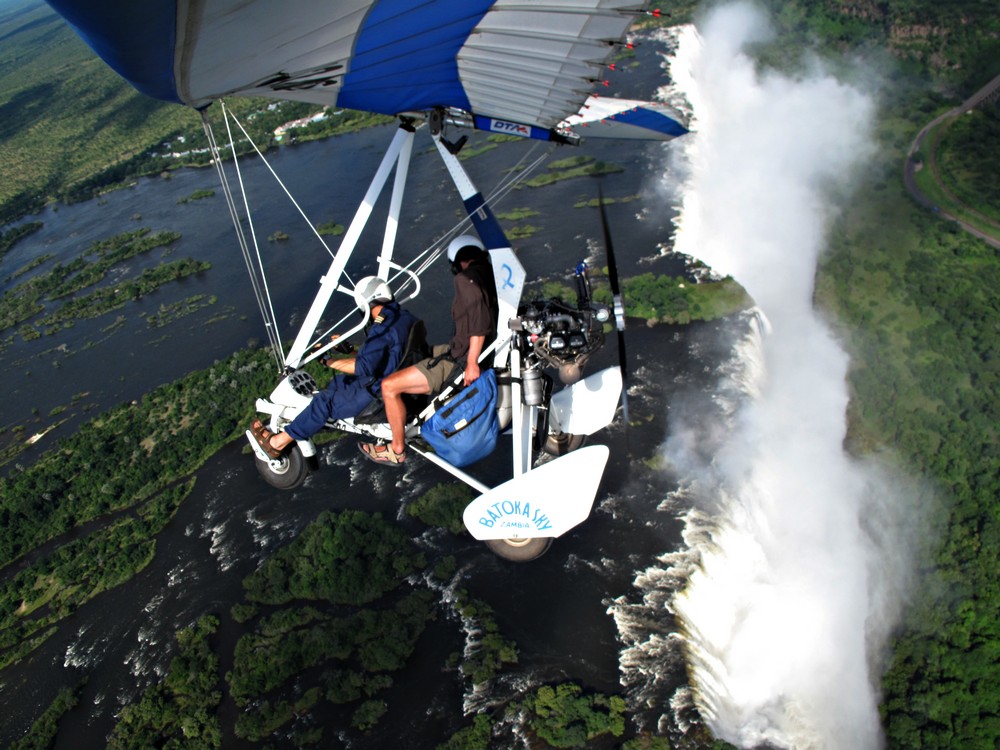