March 12th, 2011 (December 2010) – On to Segou, a riverside town 230 km east of Bamako on the Niger River. Another stifling bus ride. Another egregiously overpriced hotel. Thankfully, the town does indeed have a touch of the 'languid riverside charm' I'd read about. We strolled along the riverbank in the evening and made some initial inquires into a day trip down river. There are a variety of ethnic groups that people the area to include Fulani, Bambara and Bozo tribes to name just a few. 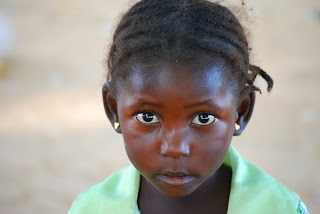 Our plan was to visit Kalabougou, a Bambara village famous for its pottery followed by a trip directly across from Segou to a Bozo fishing village. Of course, the price for a half day pinasse trip started somewhere between 'Absurd' and 'You Must be High'. As it was evening and we'd had a long day we concluded that we would put on our bargaining caps on the maro. We were too pooped to pop and in no condition to negotiate.

We enjoyed a decent dinner and befriended a small local boy who's curiosity was piqued by our presence. After a few attempts at surmounting the language barrier he ask for some money. I never feel right about handing out cash so I offered to buy some food. This sometimes helps separate the truly needy from those just screwing around. I purchased some small fried snacks along the road and watched as the boy's face lit up. He really did appreciate it. It made me feel a bit ashamed for 'testing' him. Unfortunately, this is an unavoidable byproduct of travel in poorer areas of the world. It always makes me uneasy and instills within me a feeling of powerlessness. I suppose it is better to feel something than to close it off completely.

After breakfast the next morning we headed back into town to finagle a river expedition. It turned into a mini-clusterfuddle directly resulting from our actions. Our crime? Attempting to negotiate with more than one person. How dare we?! Nobody likes that. Leslie went inside one establishment to hash out a deal while I stood outside and watched a group of men yell at each other in the local dialect, presumably, over the right to command our voyage. That wasn't awkward at all. Just wanted to explore the river, not instigate a battle royal. In the end we made an agreement with a gentleman we'd spoken with the previous evening. He neither acknowledged the fact that we had already met nor that his price was half of what it was the day before. Huh.

Although it got off to a rocky start (a faulty engine forced us to switch boats) overall it was a most enjoyable day. On the way to Kalabougou we encountered some shepherds crossing the river with their cattle in preparation for Dewgal ('The Crossing') when Fula herders drive their herds south from the edge of the Sahara to greener pastures. It culminates in a festival in the riverside village of Diafarabe.

Although the village is renowned for crafting skills pottery or not Kalabougou is worth a visit. As I walked among the small mud huts I began to think I was walking through a three dimensional illustration of the phrase 'dirt poor'. Yes, it was interesting to listen to a semi-comprehensible explanation of the pottery construction process in French (I don't parle) but the real draw was seeing how these folks live on a day to day basis. It is always unsettling to walk around such places with a camera worth more than people's homes. Want to appreciate your life? Stop by Kalabougou. 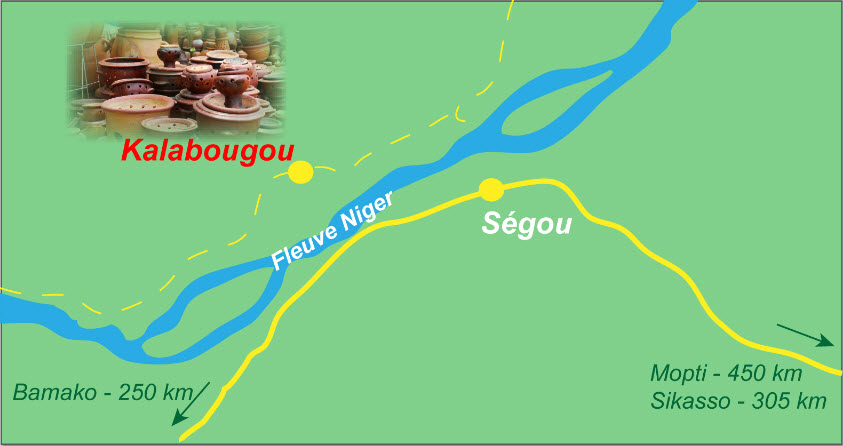 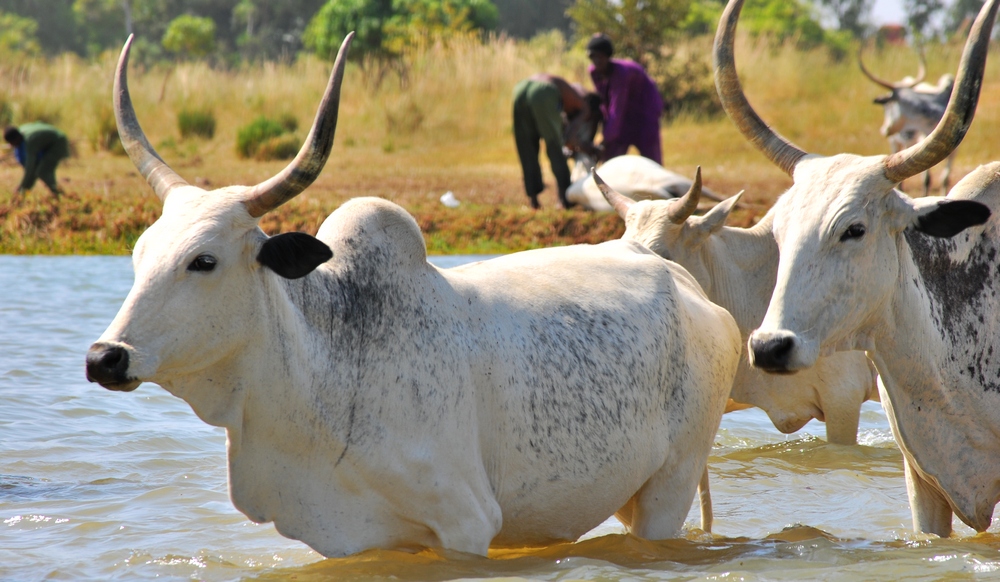 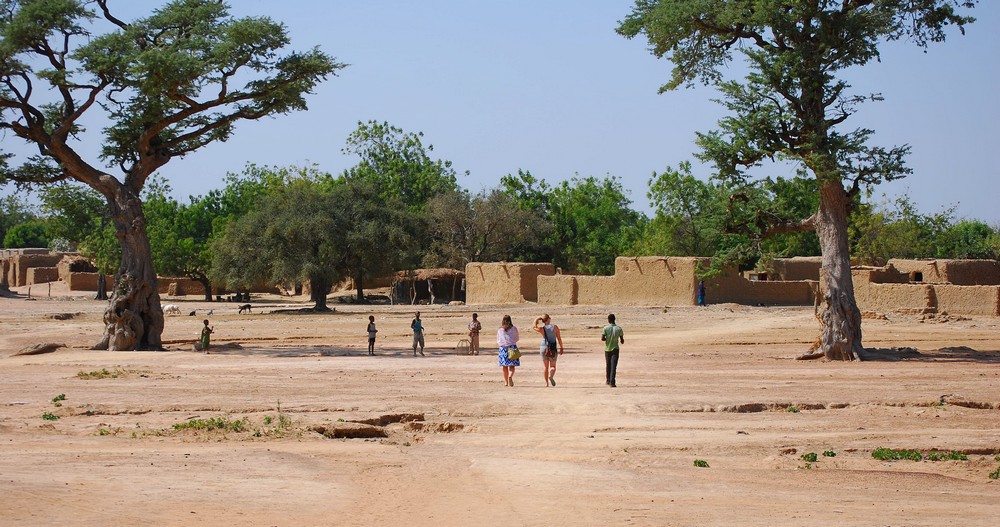 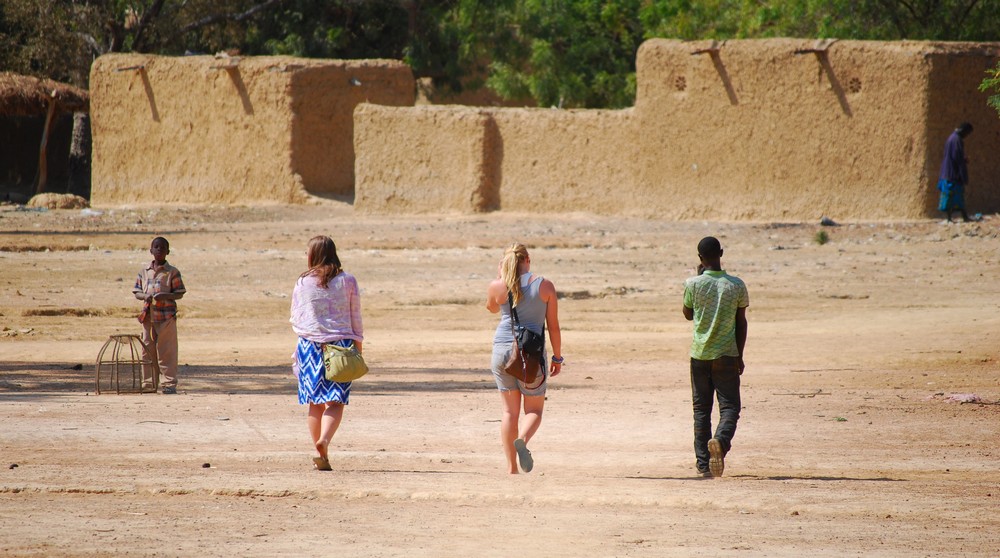 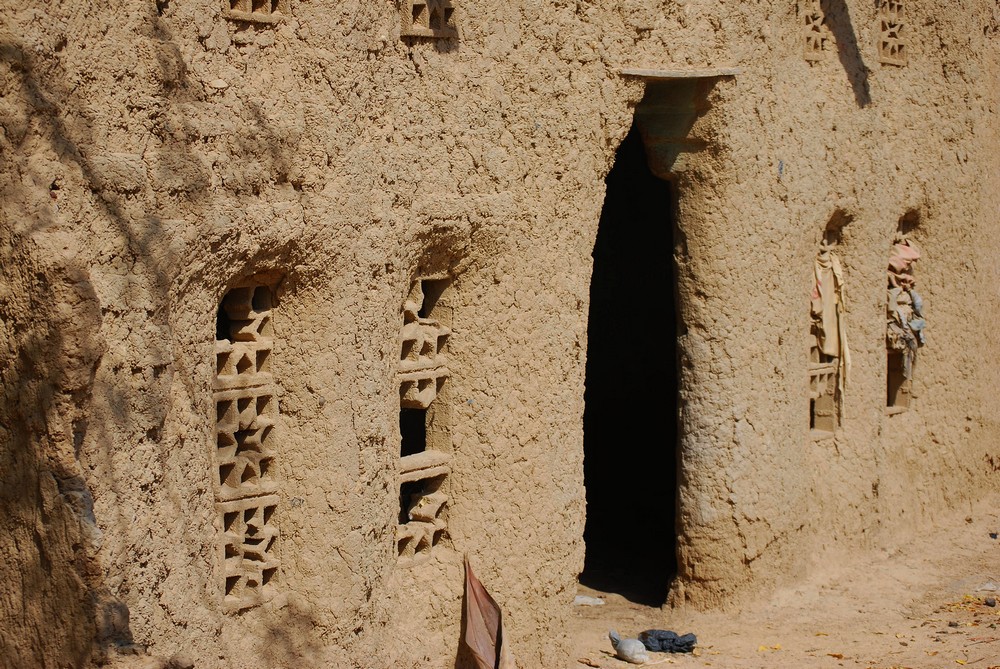 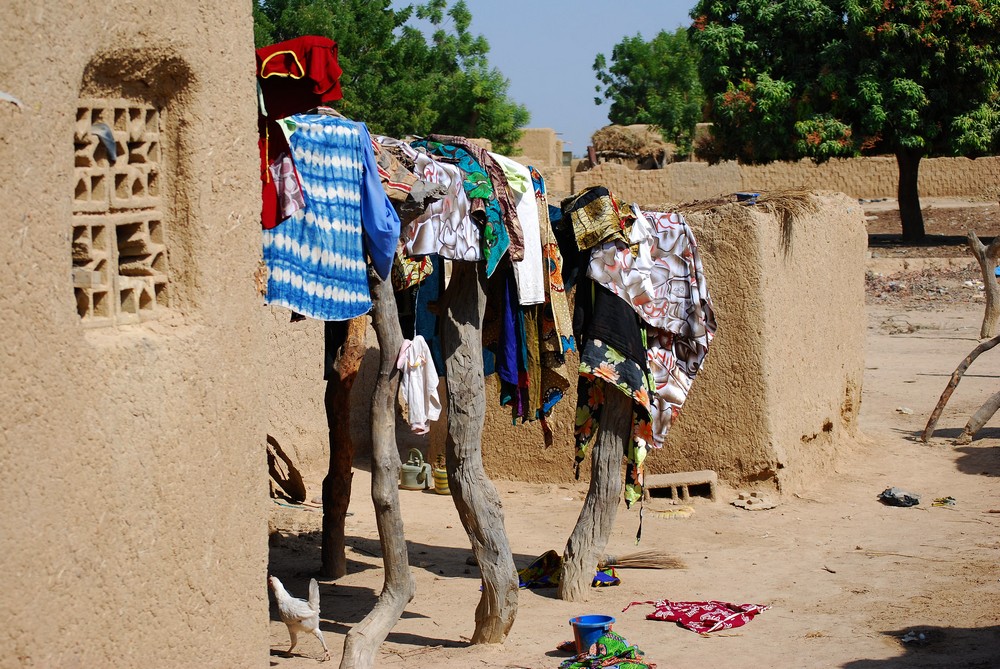 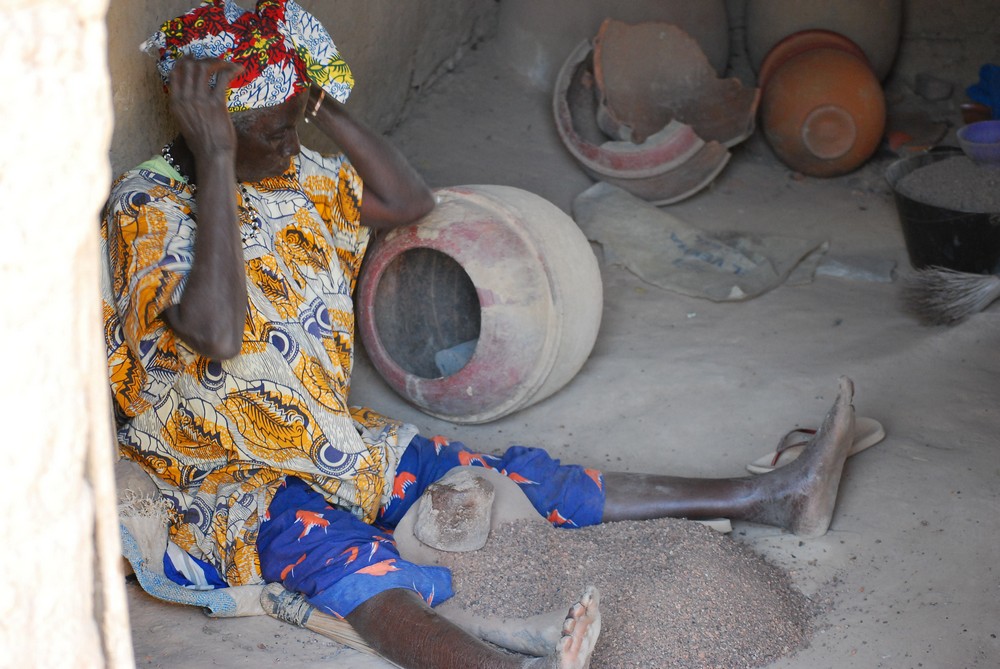 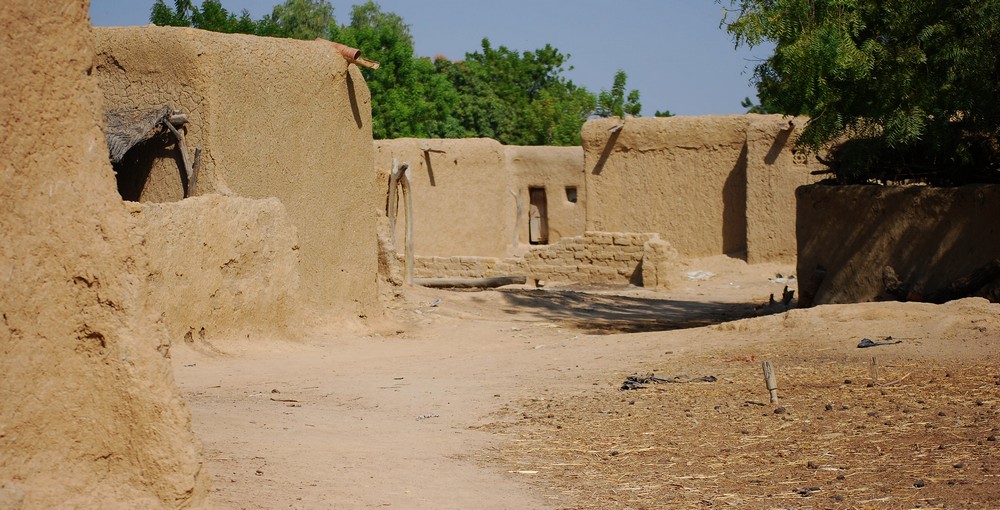 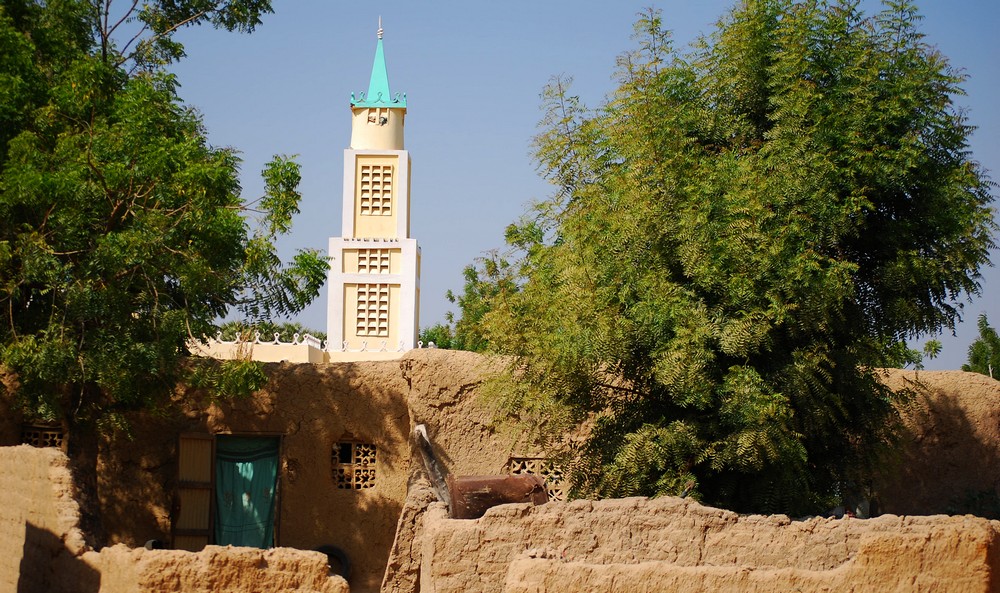 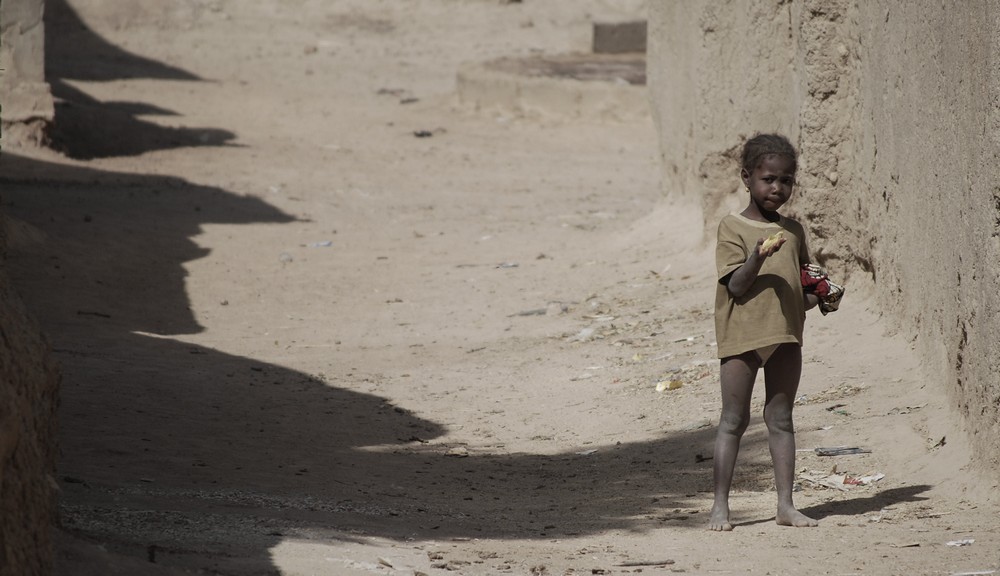 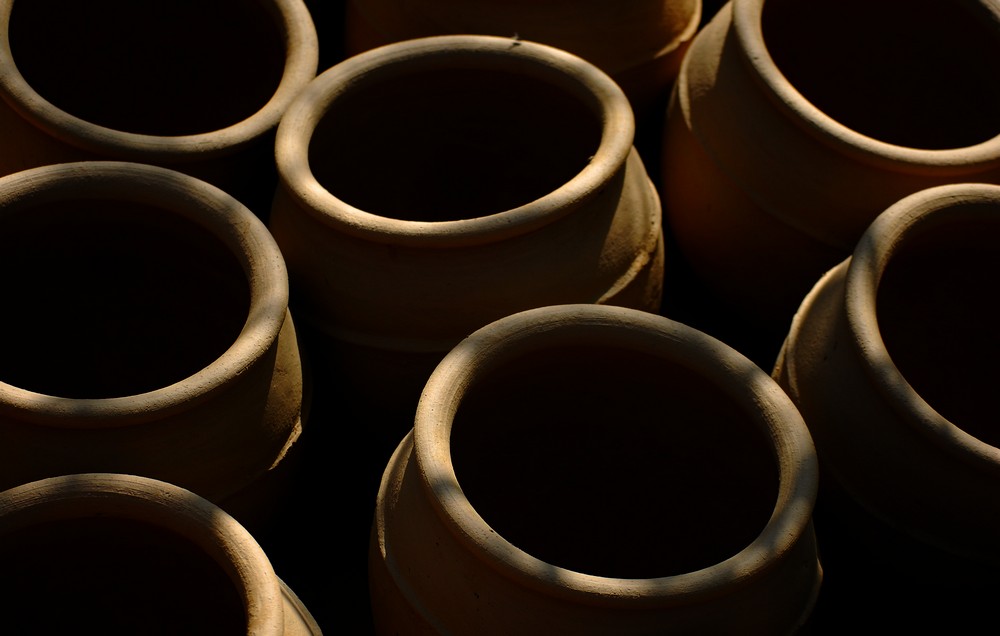 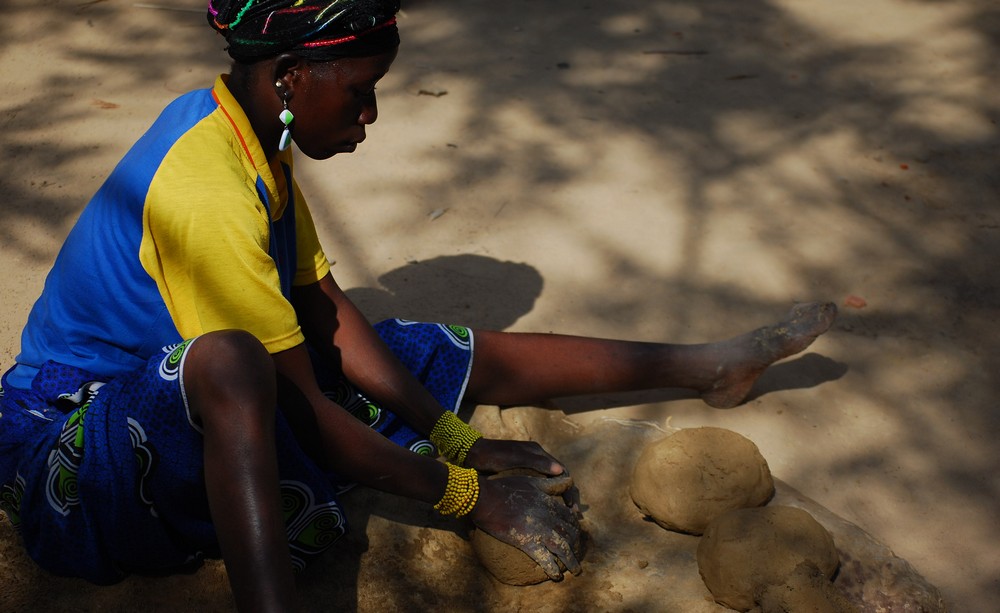 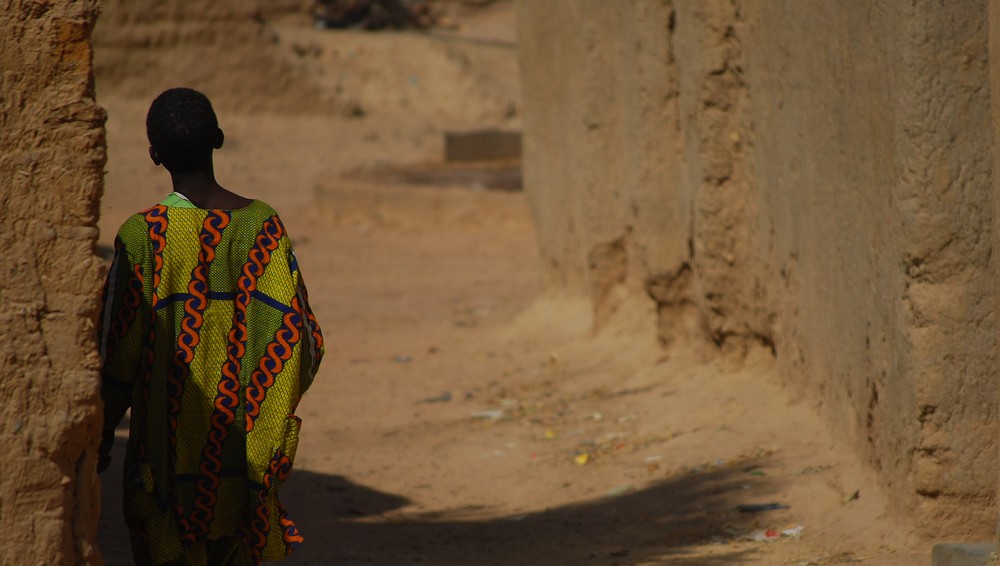 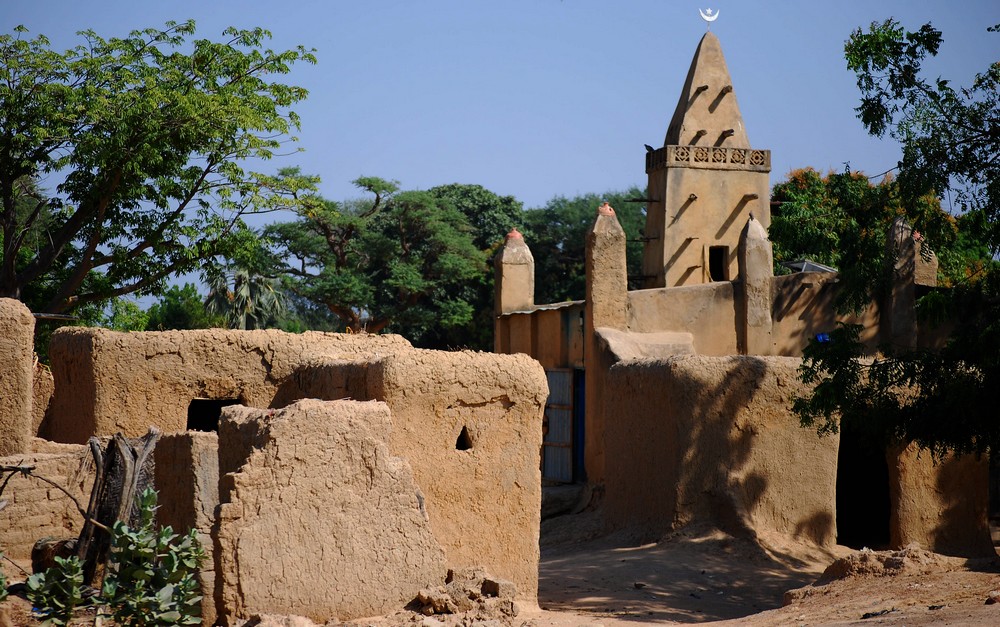 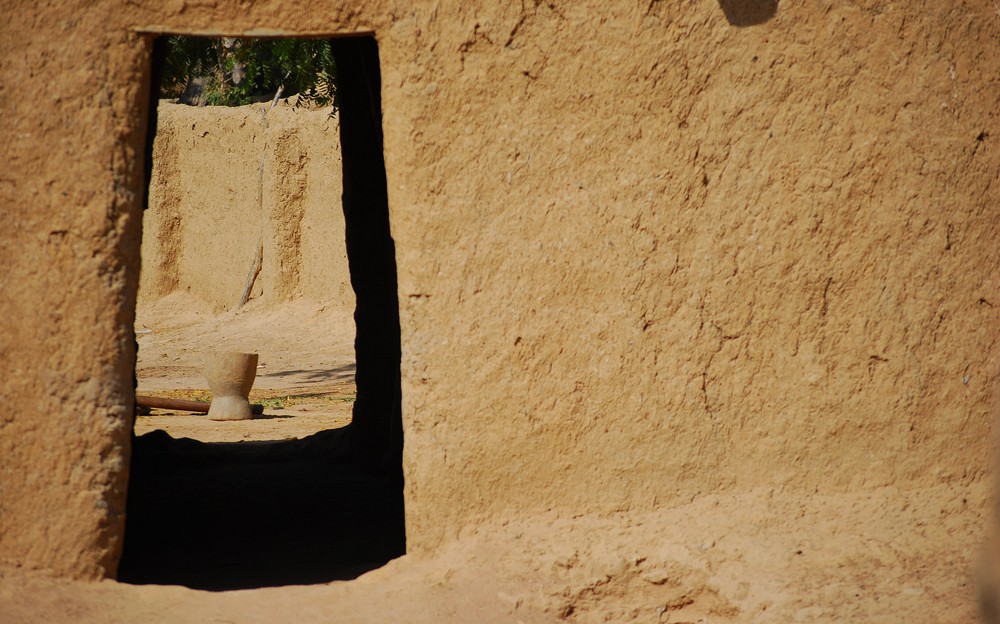 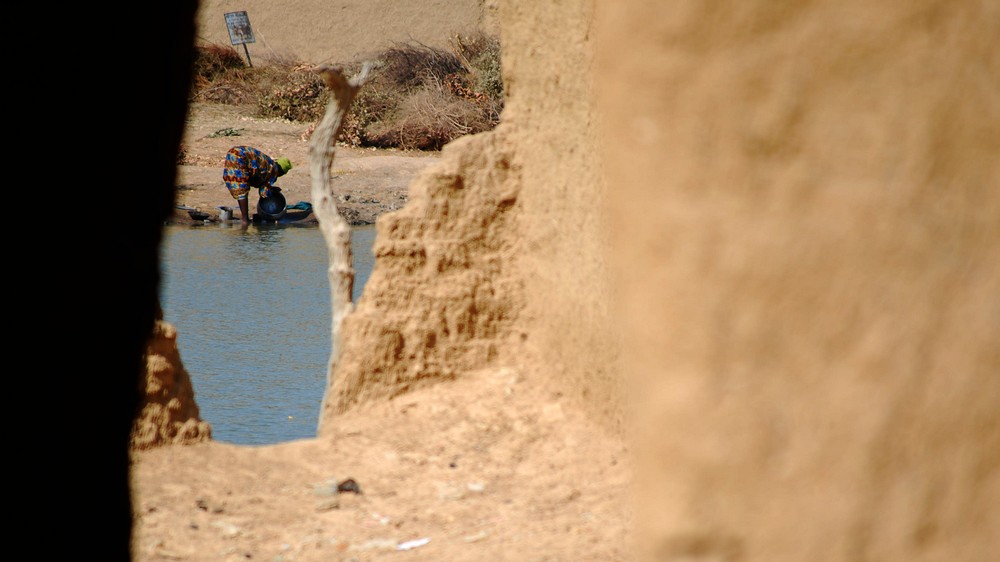 On the way back to Segou we spent some time at a couple of Bozo fishing villages. And no, these are not carnival enclaves filled with fishing clowns (although the temptation to utter things like 'Hey, look at those Bozos!' or 'What's that Bozo doing?' was a bit overwhelming). The first was a market village where folks gather once a week to sell their catch across the river in Segou. The second was an actual fishing village where we saw nets being hand-made and piles of fish traps ready to be deployed along the coast. Our guide (his name eludes me) showed us his modest home and introduced us to a nearby family that graciously offered us tea.

While strolling through the village we soon attracted an entourage of small children some of which clasped our hands and shadowed us for the duration. Their adorable nature was matched only by that brand of pathos evoked by encountering young children living in a state of quiet desperation. I doubt I could ever grow accustomed to it.

At one point an elderly women attempted to sell what appeared to be some type of family/tribal heirloom. I believe it was some sort of small stand for burning incense but I cannot be sure. I politely declined and felt a bit awkward about the offer. I guess cash trumps tradition. 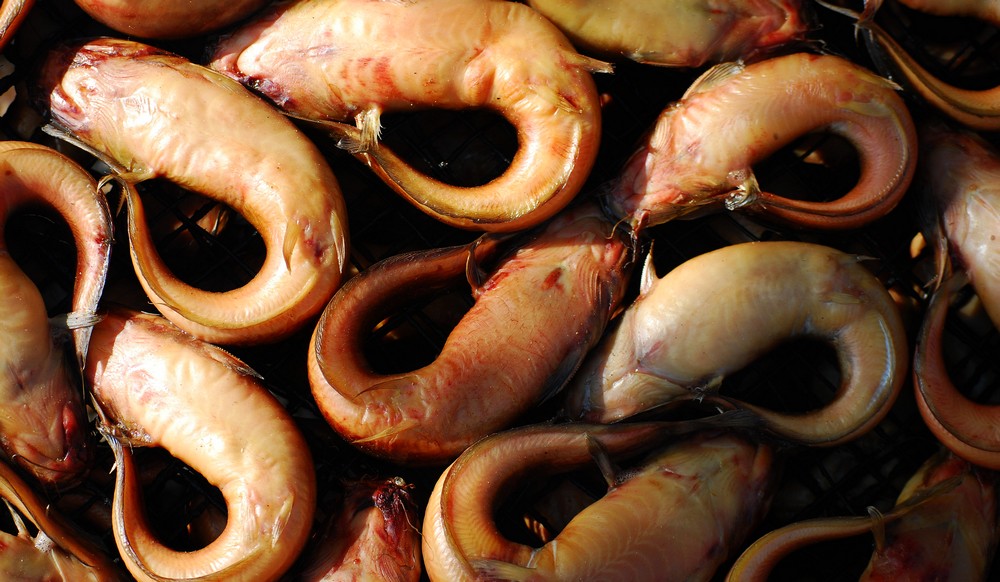 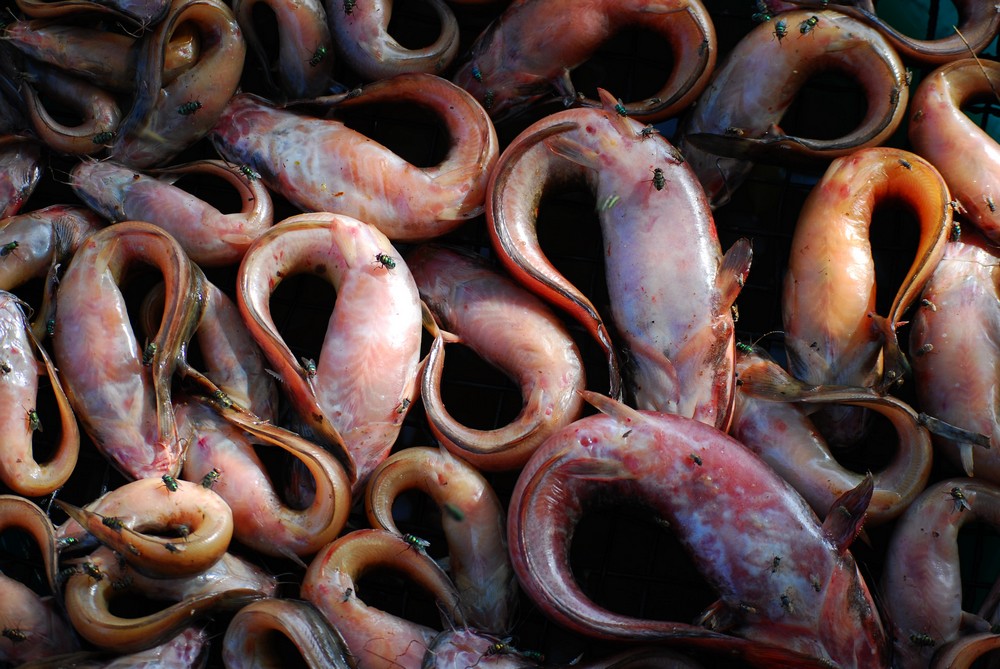 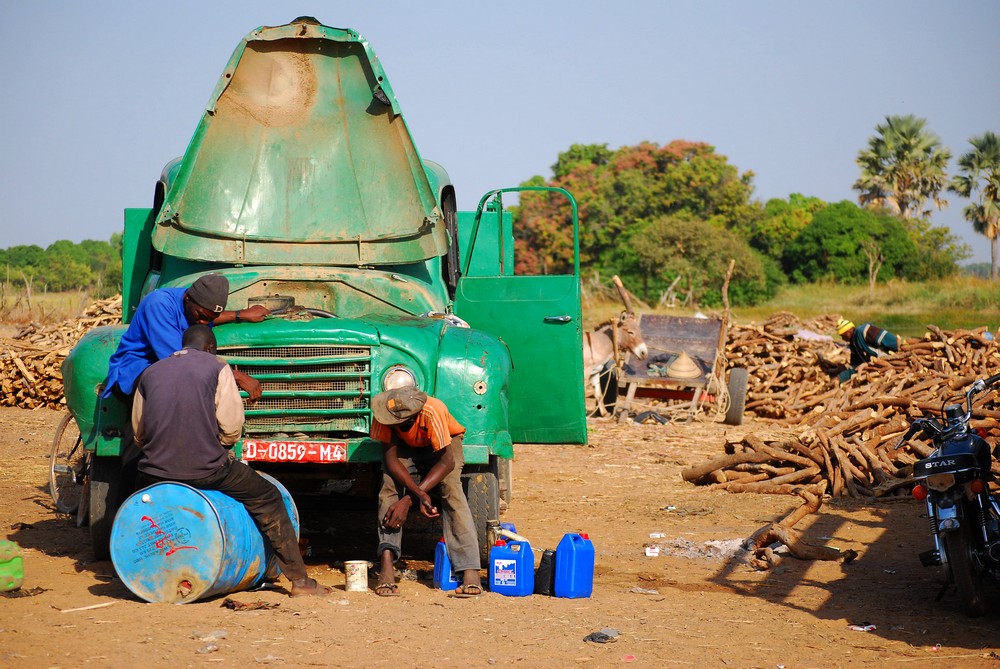 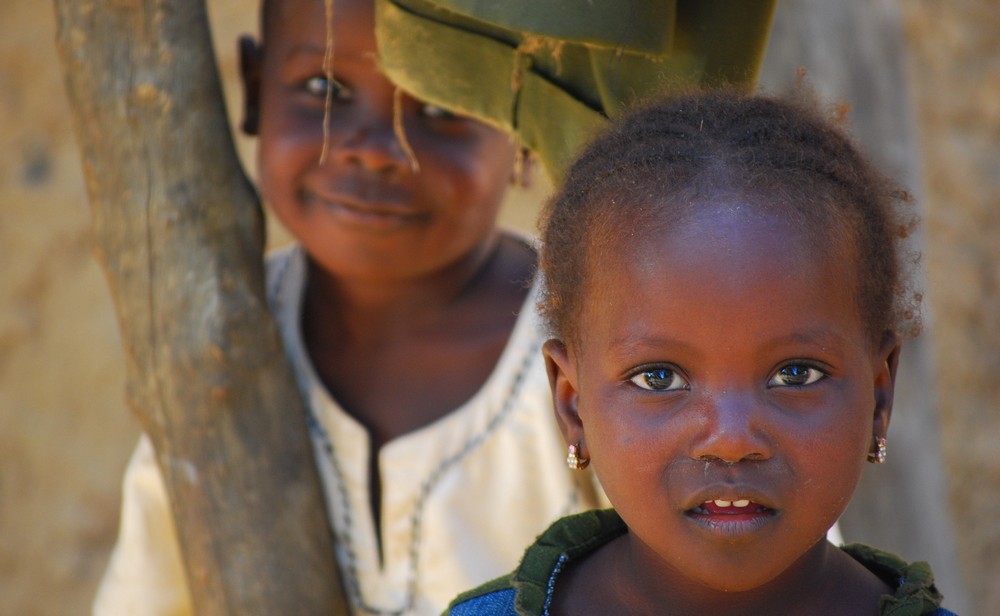 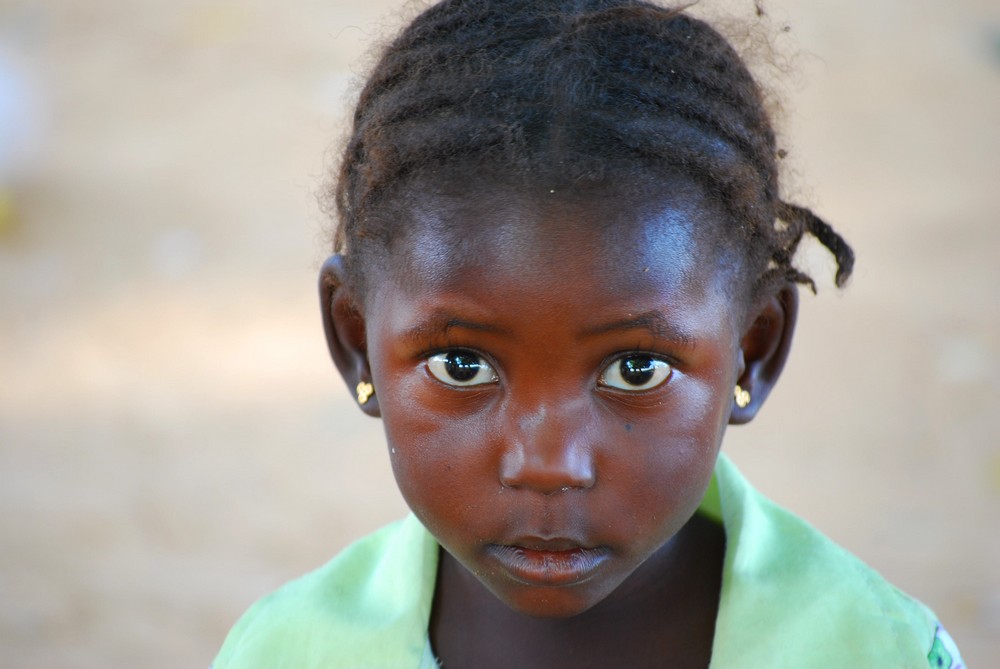 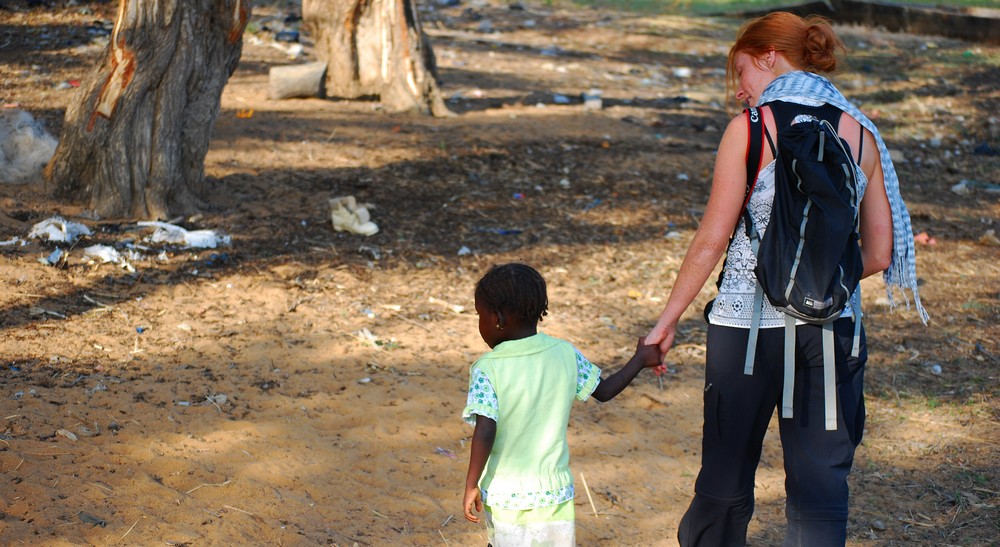 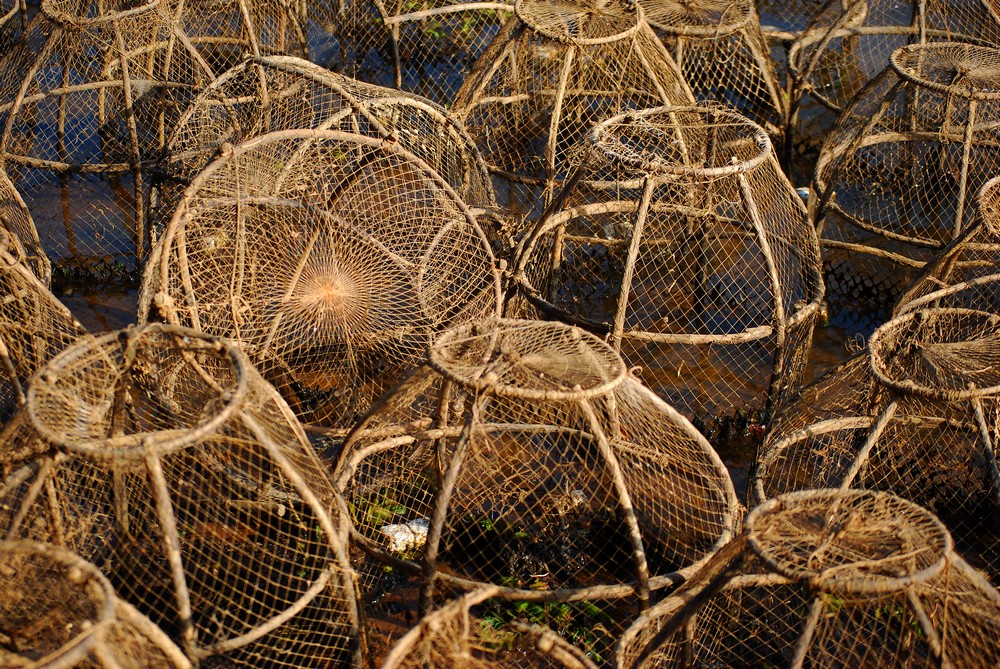 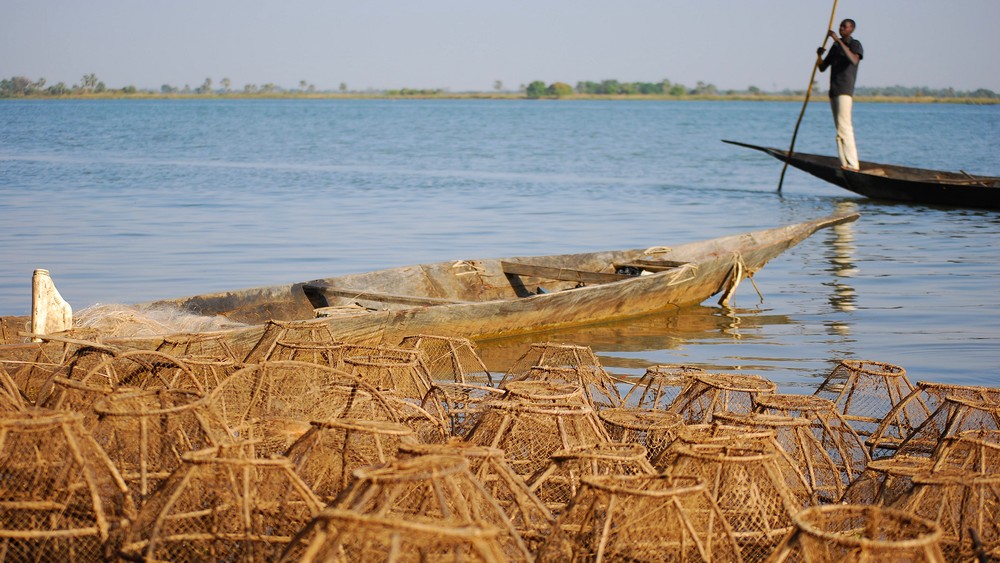 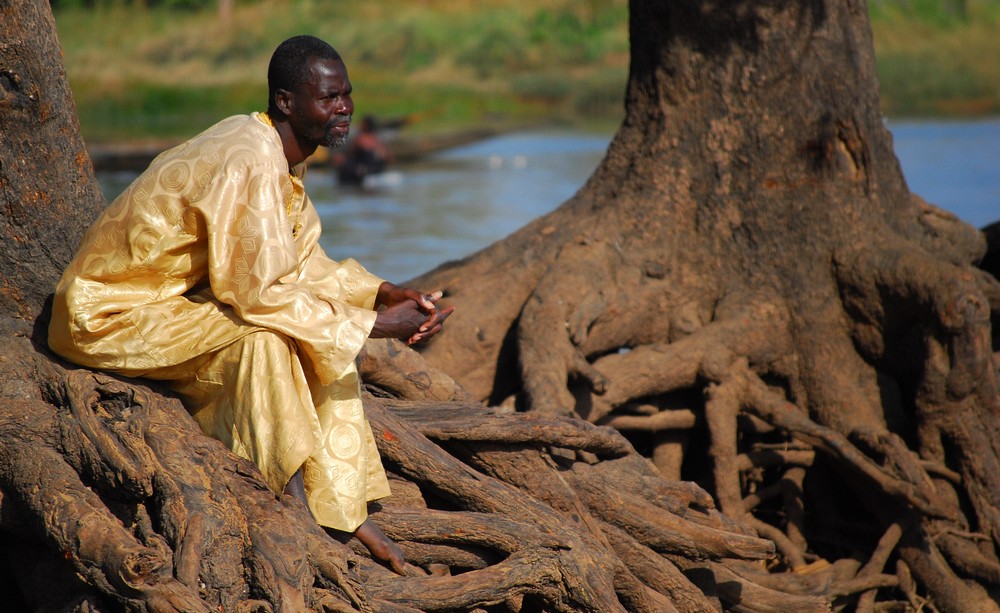 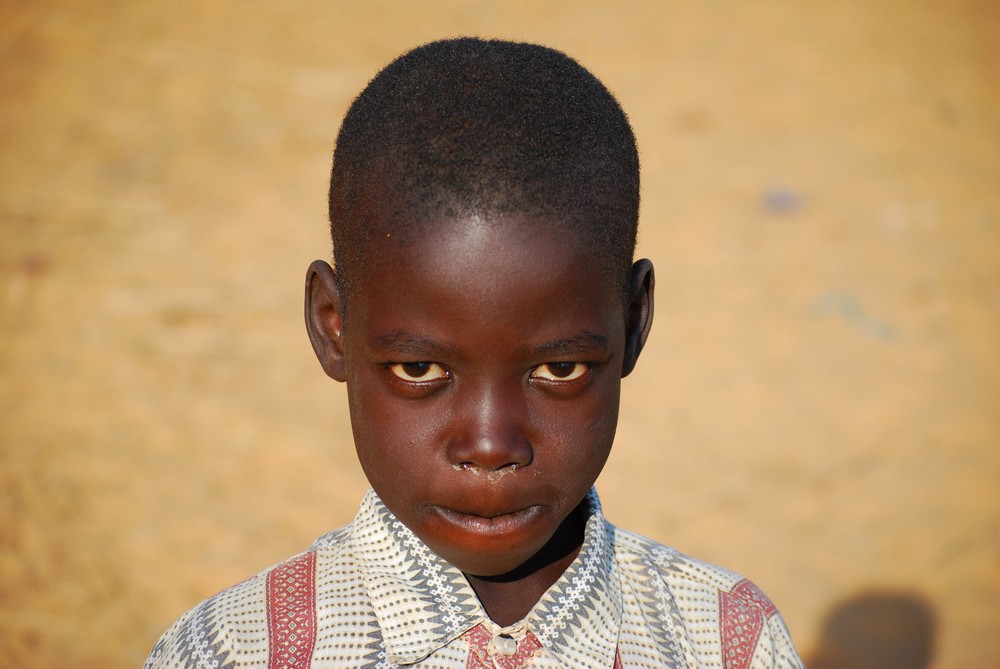 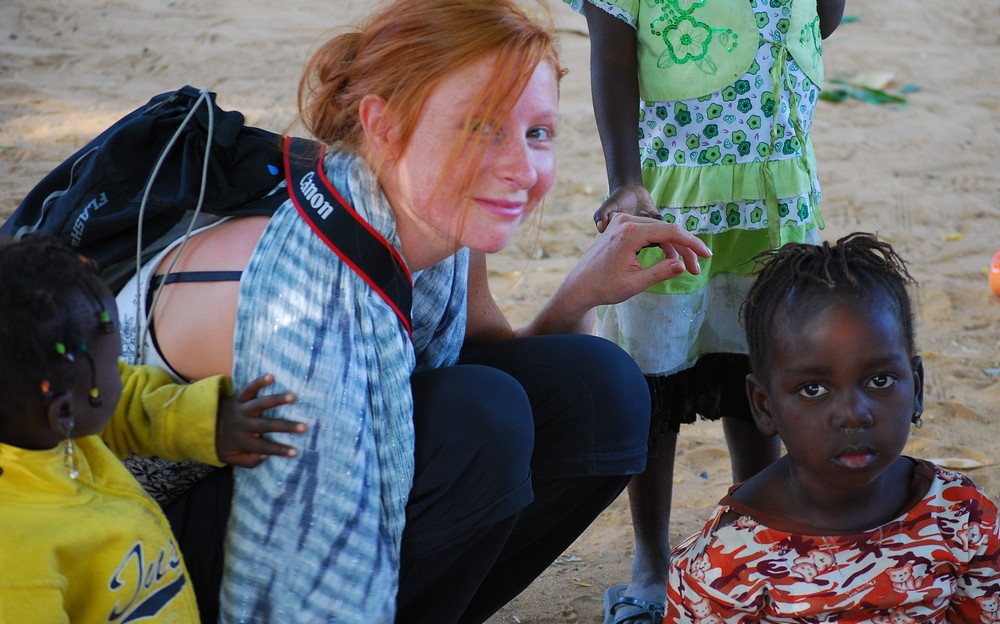 The next morning we went to the bus station to await a bus to the famed village of Djenne. Emphasis on wait. The bus was coming from the capital (Bamako) and, theoretically, headed toward Mopti. The idea was to instruct the driver to drop us off at a T-junction where we would catch another ride 30 kilometers to Djenne. Problem was when the bus pulled up a couple hours late it was packed, stifling hot, and smelled like the ass of a donkey. Everyone on board looked to be enduring some form of mild torture. We met a fellow travelogue with sweat pouring off his brow. Let's just it was less than inviting. There were two seats (separate) but it would have required us to do a sardine impression. Normally we'd just suck it up and drive on but for some reason we were in no mood. Yes, we wimped out but sometimes you just have to go with your instincts. Ours were telling us to get the f*** off the bus. We obeyed.

Back into town to review our options. Basically, we could wait another day for the same bus we'd just opted out of or we could attempt to negotiate a taxi all the way to Djenne. Fun. Contestant #1 offered to have his driver/friend take us in his 'very nice' car for the bargain basement price of 80, 000 CFA (roughly $160 US at the time). Ahhhhhhh….no. The ride was no more than 80 km so we decided this was ludicrous, ludicrous I say!

After lunch Leslie went on a mission to find other contestants. I continued my negotiations with #1. Not only did he want to provide transport to Djenne he also offered to organize a trip to Dogon Country, a place we had every intention of visiting. I figured I would listen to his spiel as this might make him amenable to a discount on the taxi to Djenne. While he was laying out a possible itinerary he received a phone call and politely excused himself for a bit. In the meantime I listened while other folks attempted to sell me CDs, small Hallmark card-like paintings, and Kola nuts (apparently a necessary acquisition for anyone wanting to take pictures of the Dogon people).

Leslie had found a gentleman she met the previous day in the midst of our river extravaganza negotiations and inquired as to transport to Djenne. He called his friend…..who just happened to be the guy I was discussing Dogon with and who had already offered the insane-o price of 80, 000 CFA. When he arrived to find that it was my compatriot who was inquiring he was slightly miffed. Why? Because we had the brass ballsacks to negotiate with others. How dare we?!

He dropped to 70,000 CFA but not before laying a guilt trip on Leslie by pointing how they are 'both young and need to stick together.' It is not my fault Leslie has no sense of solidarity. Talk about moral bankruptcy. I'd like to believe we are not callous unfeeling robots with little regard for the plight of others, especially in one of the poorest nations on earth. We don't mind paying a bit more than the 'local' price but a rate based on our country of origin and our ability to pay has a tendency to chap my ass. Leslie then proceeded to chap his by declining.

After a fair amount of wrangling and a minor investigation into alternatives we (as in Leslie) managed to whittle the price down to 50, 000 CFA. I am quite certain even that is a bit inflated but no one was willing to go lower. Of course, it did require Leslie to hear yet another 'Dogon Country' sales pitch. Problem was even if we wanted to go with some of these folks we had no idea as to when exactly we would be going. Not only that none of our salesmen were actually from Dogon itself, a requirement we'd been instructed to insist upon. 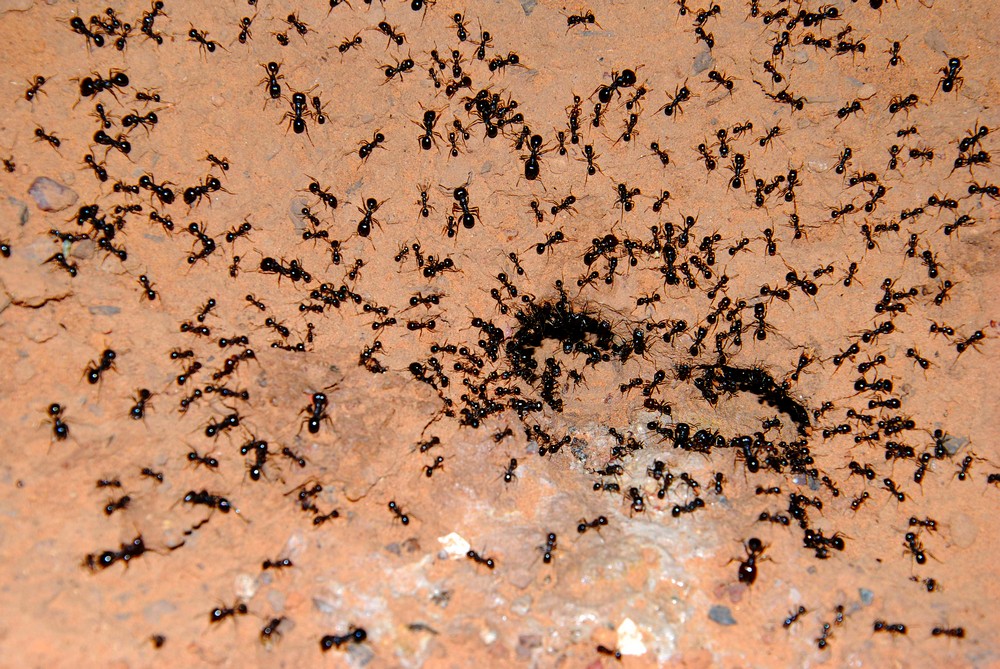 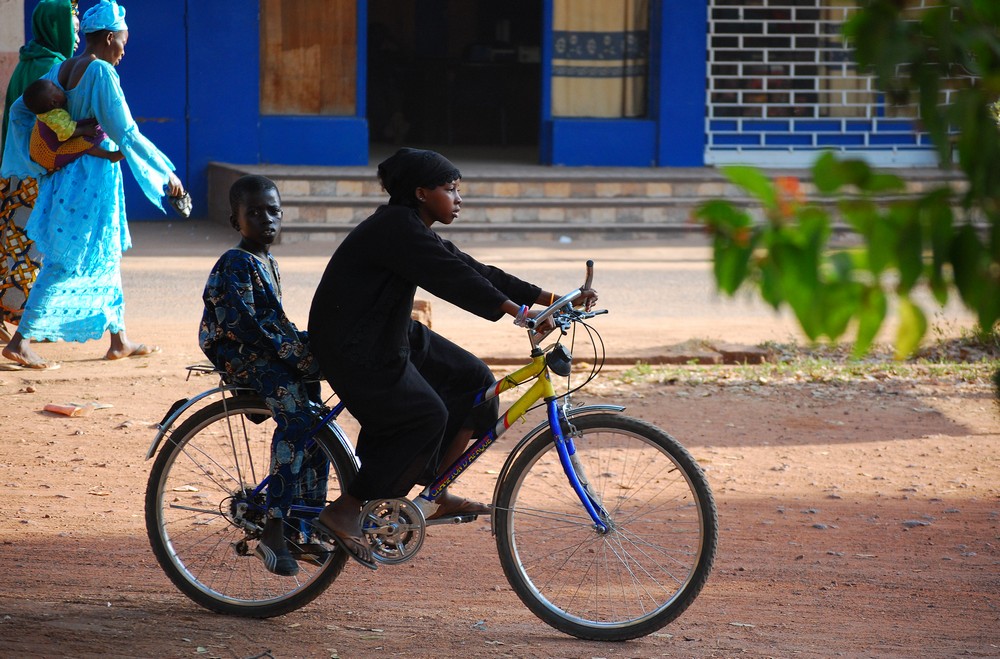