March 5th, 2011 (December 2010) - If you were a police officer in Bamako what would you do on Friday and Saturday nights? Let me tell you. You would park your ass at an intersection and shake down any and all tourists/foreigners that pass by. You would also behave like an asshole. We decided to check out Le Diplomate, a bar own by Toumani Diabate (one of Mali's most famous musicians). Although we did not get a chance to witness his expert Kora skills I did get the opportunity to watch Leslie dance in the midst of some rather rambunctious gyrating Malian men. They tried to drag me up there but I only shake my caboose for cash.

On the way back to our hotel we had the pleasure of being stopped by traffic police (or was it a bunch of yahoos in costume?). The taxi driver pulled over at the behest of said yahoos and waited while a jolly beret wearing 5-0 asked me to produce our passports. We did not have them. To make matters worse I forgot to bring a copy, something I normally do. Mr. Beret was not pleased. I thought he would give us a hard time accompanied by a stern warning and send us on our way. I thought wrong.

I soon realized these dudes did not pull us over for shits and giggles. I exited the vehicle and explained that our passports were at our hotel and that I would be happy to wait there whilst Leslie went to retrieve them via taxi. No dice. Mr. Beret kept reiterating that traveling w/o our passports was 'no good'. My reply was, "Oooooookay, so how about you let my friend get them?' This option was apparently 'No good.' Uh-huh.

I was starting to get the picture. I mentioned the word money to Mr. Beret and the newly arrived Mr. Grumpy Pants. They seemed to balk at the suggestion. Now I was confused. And irritated. What I was not was scared. Let me tell you why. There was something undeniably comical about the whole affair. They wanted to see our passports. We didn't have them. Could we get them? No. Did they want money? No (at least not ostensibly). My answer to the question as to how to proceed was always answered with a 'No good'. And while this was unfolding the taxi driver began demanding payment so he could skidaddle. He actually expected me to pay him so he could leave us there with no means of transport? Ain't no f***ing way, hombre!!!

Then came threats of incarceration. Super. I probably should have been frightened but I was not. I reacted by feigning terror in a preposterously understated voice. Had their English been at a more advanced stage they would recognized my sarcasm. They did not. I threatened to call the US Embassy. They threatened to let me. I suddenly realized I'd neglected to enter the number in my phone, also something I normally do. So much for bluffing. Dummyface I am.

This went on for a bit. I wasn't happy. Beret and Grumpy weren't happy (and becoming progressive less so). The taxi driver was not happy. It was melancholy all around. Enter Leslie (or as I like to call her 'The Peralta'). I began to appreciate the fact that arguing with me was perfectly acceptable but facing down a cute western female redhead was a turd of a different texture. They did not quite know what to do with her incessant cajoling and pestering. I shut my mouth and began enjoying the show. She was relentless: 'My friend can stay here and I will go get our passports. It is just across the bridge. Right over there. Why can't I go? I don't understand. Why are you doing this? It's right there. I don't get it. I visit your country and you treat me like this. How about if I just go get our passports. Please? Why not? It's right across the bridge. Over there. Can I go get our passports? Why are you doing this to us? We come to visit your beautiful and country and you do this? Why? Our passports are right over there.'

Beret finally relented and let us move on. Forty-five minutes of my life I will never have back. The next day I discovered that this is not an uncommon occurrence. I met a driver who told me that he often takes back streets in order to avoid the hassle. Apparently, it is not abnormal for them to follow through on their threats and throw folks in jail overnight, or at least until they cough up some cash. Otherwise, I guess they let folks go regardless after a night in the brink. He also told me that although a bribe is their aim they behave as if the idea of such is an insult to their honor. I guess you almost have to beg them to accept the money so they can save face. Good to know. And he also said that since they often do not have vehicles you are better off blowing through the checkpoint (I fantasize a hearty 'GO F YOURSELVES!!!' would accompany such a move). Supposedly, you can also pay the taxi driver ahead of time to facilitate the deal. Maybe next extortion.

One thing I am sure of, if it had been me and a male friend (you reading this Gibbs?) I am quite certain I would have spent a night trying to avoid an episode of Prison Bitch: Mali Edition. 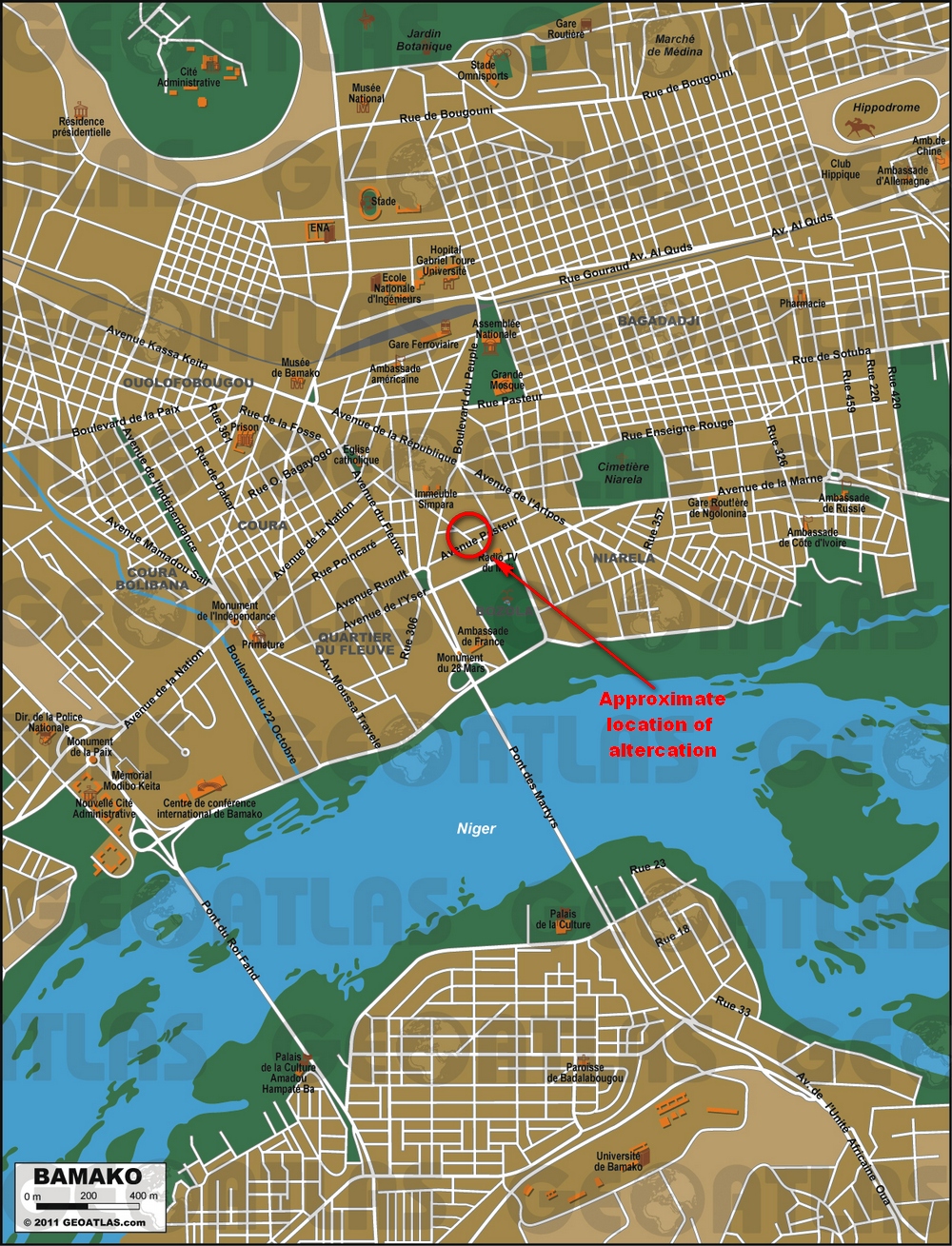