Juju For Me Me (Djenne, Mali) 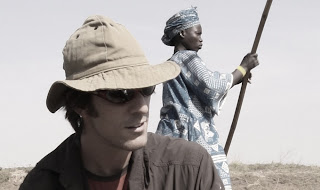 March 16th, 2011 (December 2010) – The next morning we met Sori near the Great Mosque and hopped on the motorbike he acquired on our behalf in furtherance of a guided tour of the surrounding area. From what I gather the region is an archeological and anthropological wet dream as it is one of the oldest urbanized centers in sub-Saharan Africa. The archeology student from Rice University (I believe her name was Gaby) we'd met the previous day was there excavating Djenne-Jeno, the original site of Djenne just to the south.

Just outside of town we came across an unusual scene, ancient burial pots protruding from the ground just feet from the road on which we were traveling. Gaby told us that many of the pots probably still have skeletal remains in them. Unfortunately, preservation efforts lag behind requirements so much of the area's historical wealth is still waiting to be studied. You'd think that someone would still make some minimal effort at preservation before creating a road right through a burial site. Then again, who the hell am I, really? I should think that if my primary struggle was simply living my life I probably would not give two shits about dead pottery people either. But then again.... 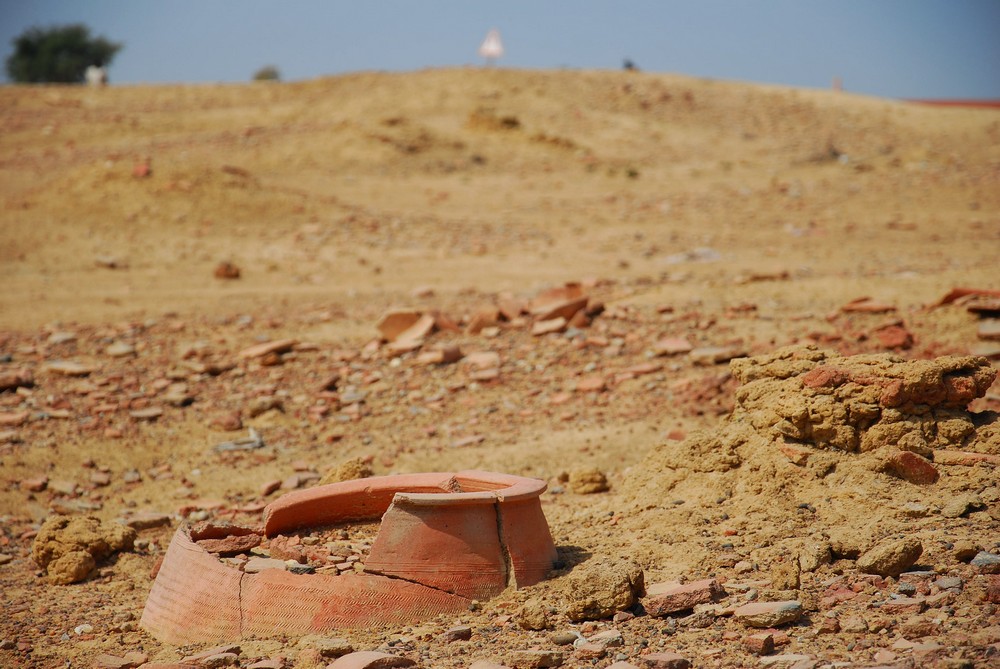 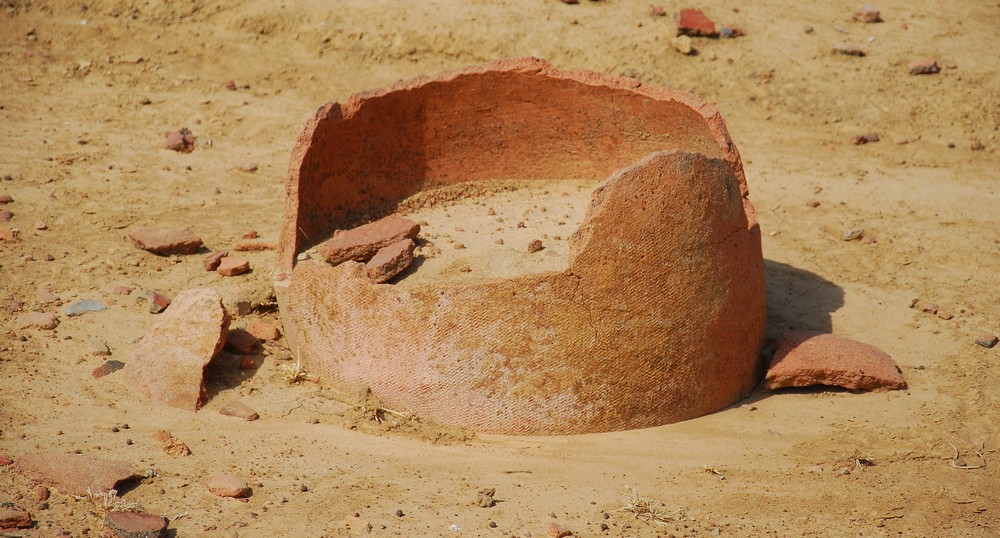 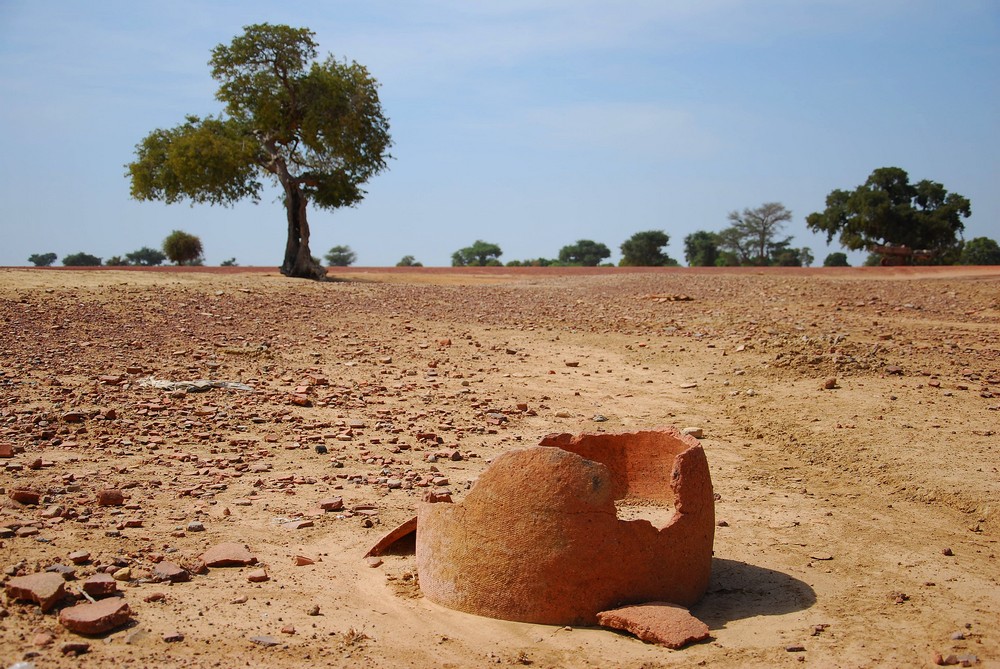 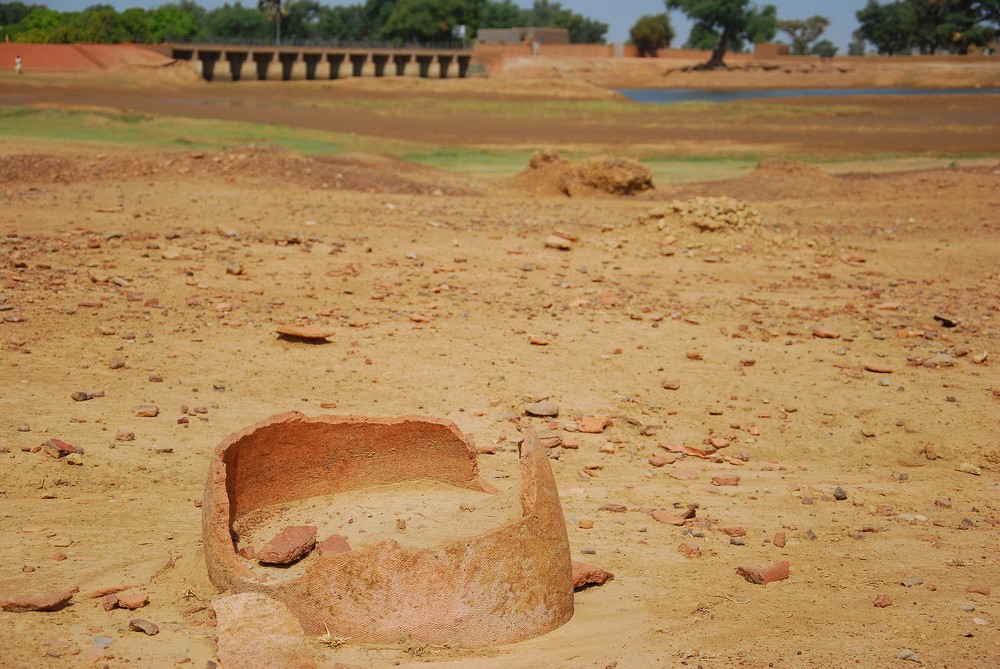 Sori then led us to a Fulani village not far from Djenne. We were again exposed to the machinations of everyday Malian village life. Mundane, pedestrian, but still altogether fascinating. Another planet, millions of miles from the world in which I grew up. After dropping by the homes of Sori's friends we visited a local craftsman so we could stock up on juju. Can you ever really have too much? I don't think you can. Juju basically refers to the supernatural power ascribed or infused within a chosen object or talisman. And folks take it seriously. Sori told us he has spent as much as 50,000 CFA ($100) for his own that he carries with him at all times. However, our own personal juju would only set us back about $6 each. Hopefully, you don't get what you pay for.

So Leslie and I sat back, drank tea, and watched as two men crafted our own personal juju. All you need is some goat leather and a verse from the Koran, at least in that village. Sori told me that much goes into choosing the appropriate verse…..unless you are a tourist. Then I guess any old verse will do. In reality so would a blank piece of paper, a hex, a knock-knock joke, a recipe for dolma, or a naughty poem for that matter. So what was in ours? Who the hells knows? And we mustn't forget the Juju Golden Rule: Juju onto others as wish them to juju onto you. I could not resist.

So the paper is folded and encased in leather (rectangular in shape), covered with some sort of curing/preservative concoction and fastened to the end of a strap that gives it the appearance of a necklace. However, it is meant to be fastened to a belt or the like and worn underneath the clothes in the waist area. In order to 'consecrate' our juju, so to speak, we all joined hands while the craftsman uttered something in Fulani. Luckily, we did not have to be naked.

I am not, for the most part, a superstitious person and my experience with the supernatural is confined to Hollywood. However, I have to admit that in the back of my mind I was a teensy-weensy uneasy about having the juju (which rhymes with voodoo), especially in light of our recent experiences. When I was in Nepal I was given two Tibetan prayer scarves before setting out on a trek for good luck. I still have them. I can use all the luck I can get. But I suppose it can swing both ways. Hmmmmmm….. 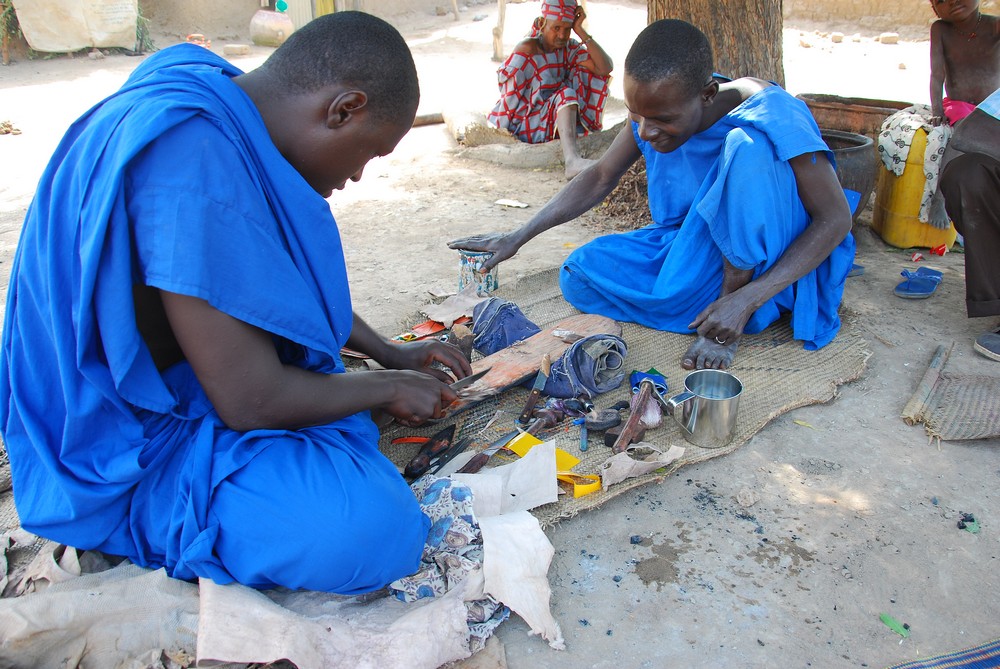 We departed for another nearby village, this time settled by Bozos (an ethnic group, not clowns). This required a short ferry across a small river that had yet to completely dry up. As we entered the village we saw woman and children smoking fish (as in over a small fire, not stuffing them into a bong and hitting it) on the ground and watched as airborne thieves (some species of rapture) made repeated attempts to make off with the catch. Here we visited the local blacksmith shop, stopped by another mud brick mosque, and paid a visit to Sori's grandmother so he could deliver some medicine (she was feeling a bit ill). 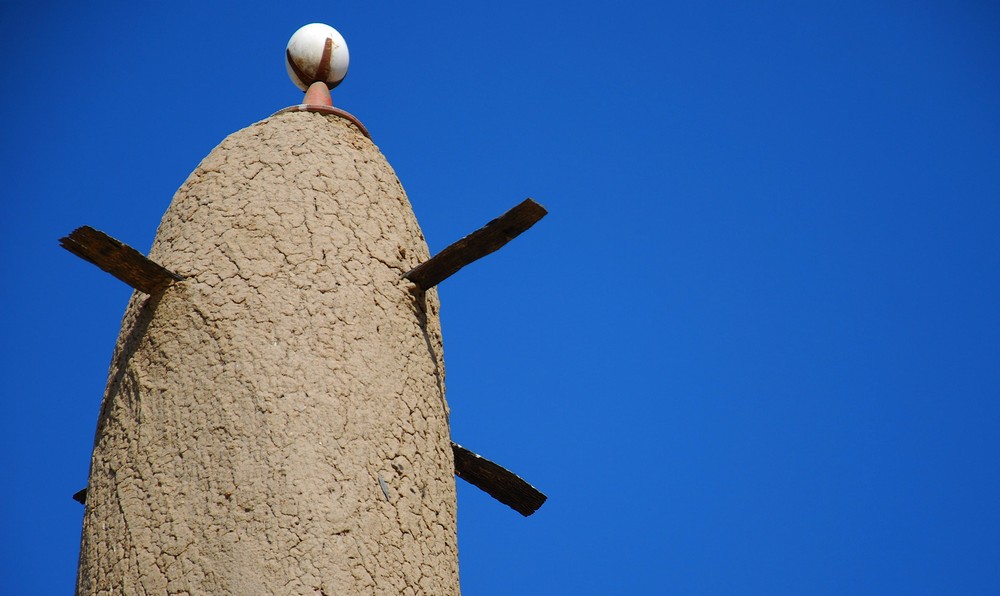 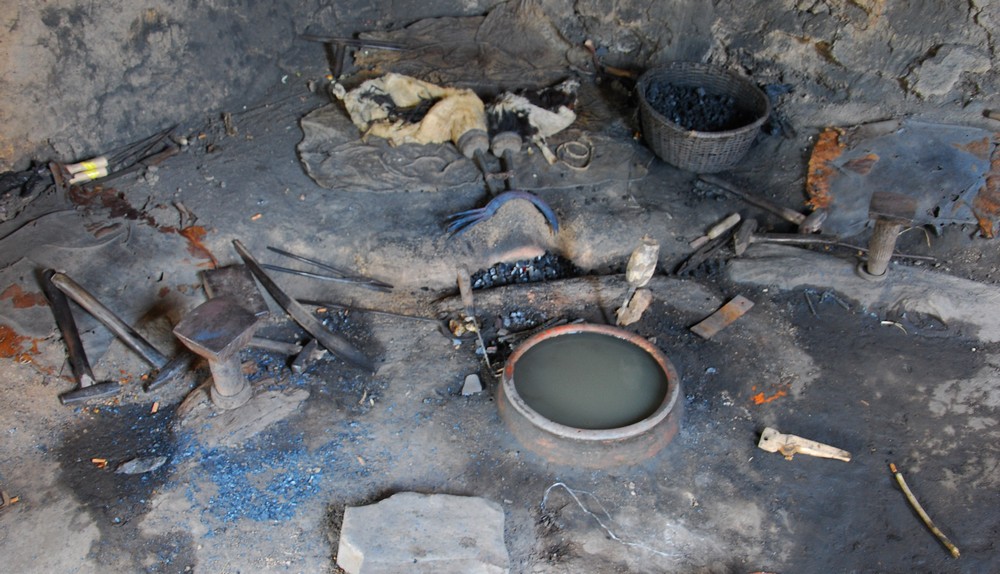 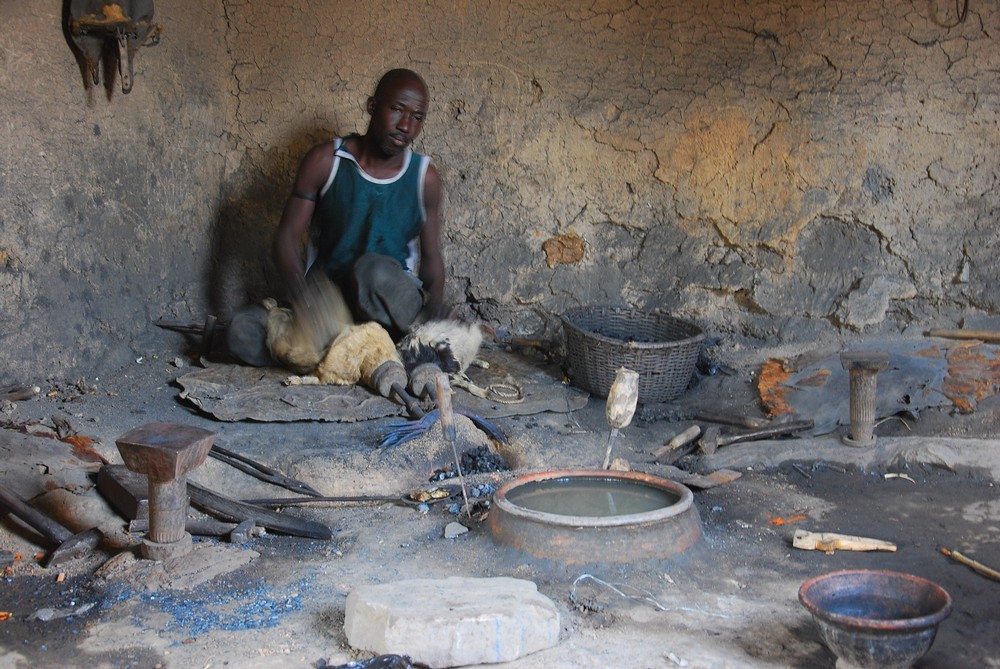 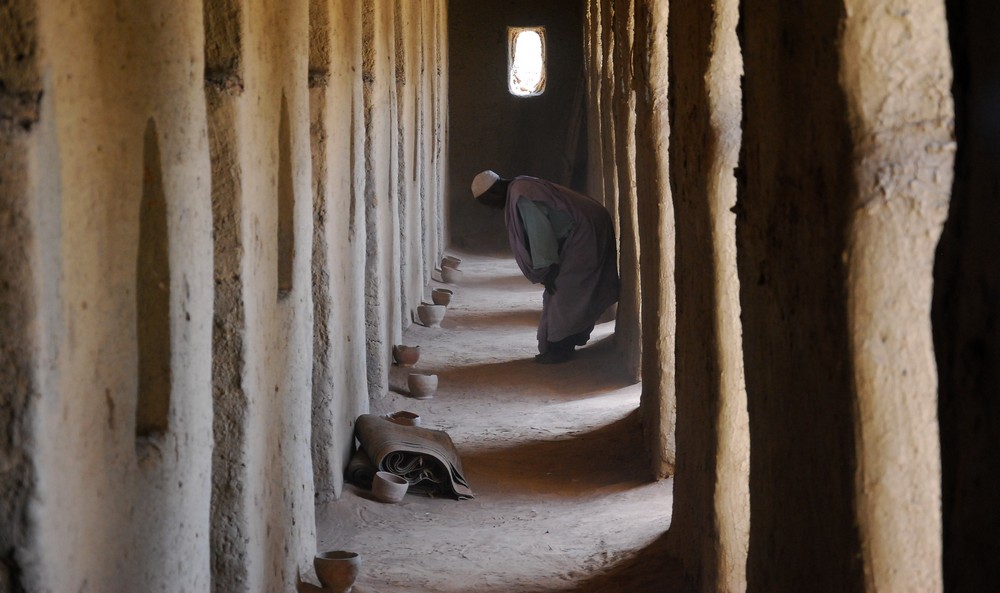 Upon returning to Djenne Sori gave us a short tour of the main village where we learned a bit of history, witnessed young boys memorizing Koranic verses outside of a school, took a peek inside the local witch doctor's office and strolled around a bit. The place is fascinating but you must be prepared for scenes of abject poverty. Although much as been done in the way of development Djenne still suffers from a lack of adequate drainage facilities and one is required to avoid puddles of waste water constantly. Apparently, they are still trying to work out the kinks of a soil infiltration system developed specifically for the village and funded by the German government.

And there is another wrinkle. Because the entire village has been designated a World UNESCO site the residents are forbidden to renovate their homes to include interior alterations. Doing so would jeopardize their special status which in turn could cut into the tourist trade. I guess you could say they are caught between an ancient rock and a hard place. I can only imagine the resentment that arises from being forced to live in a museum. 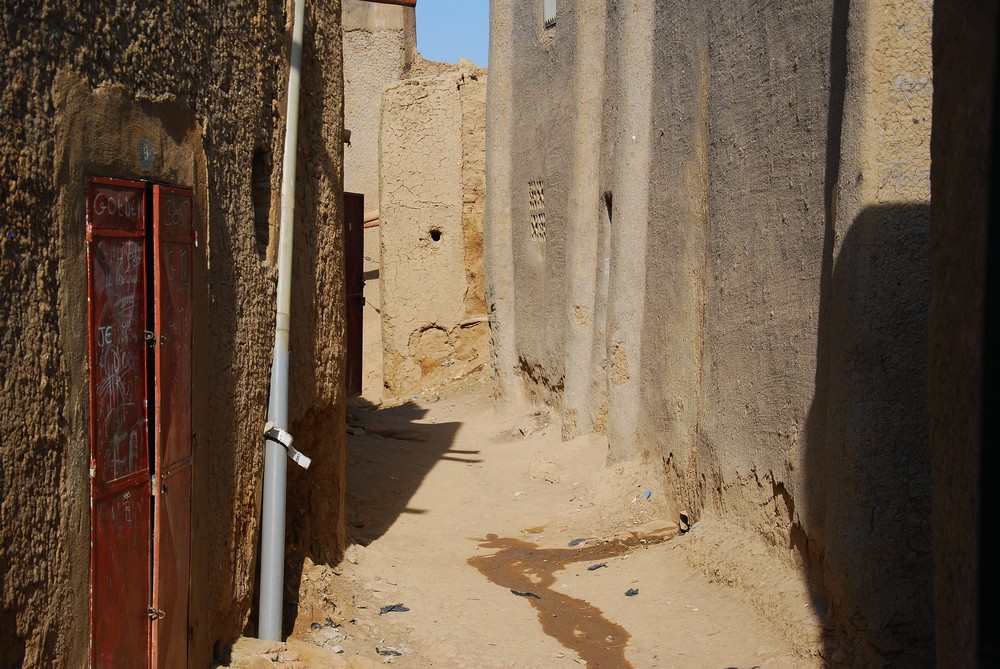 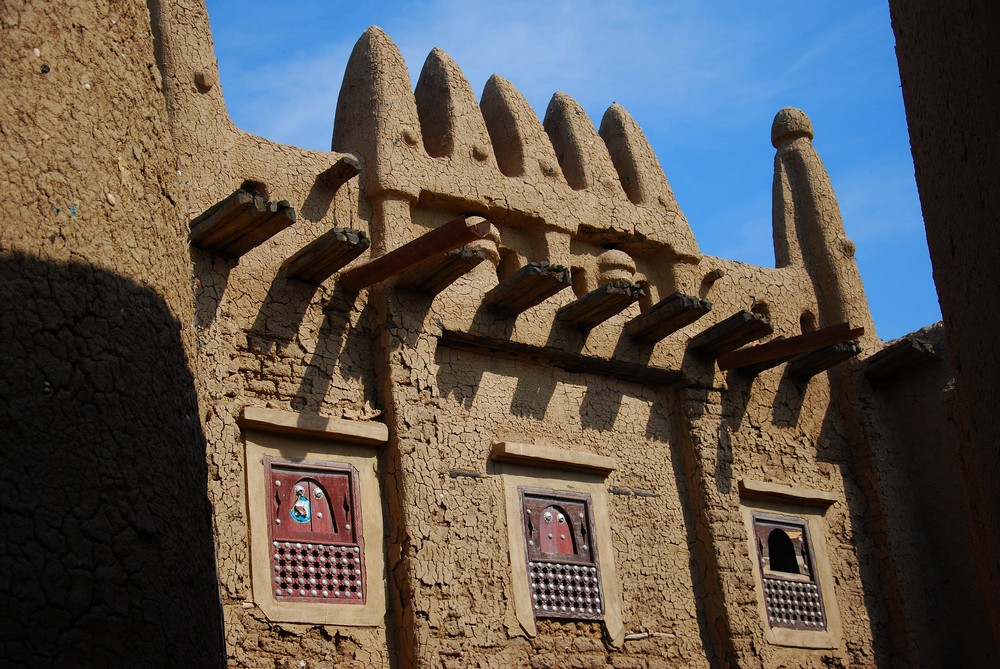 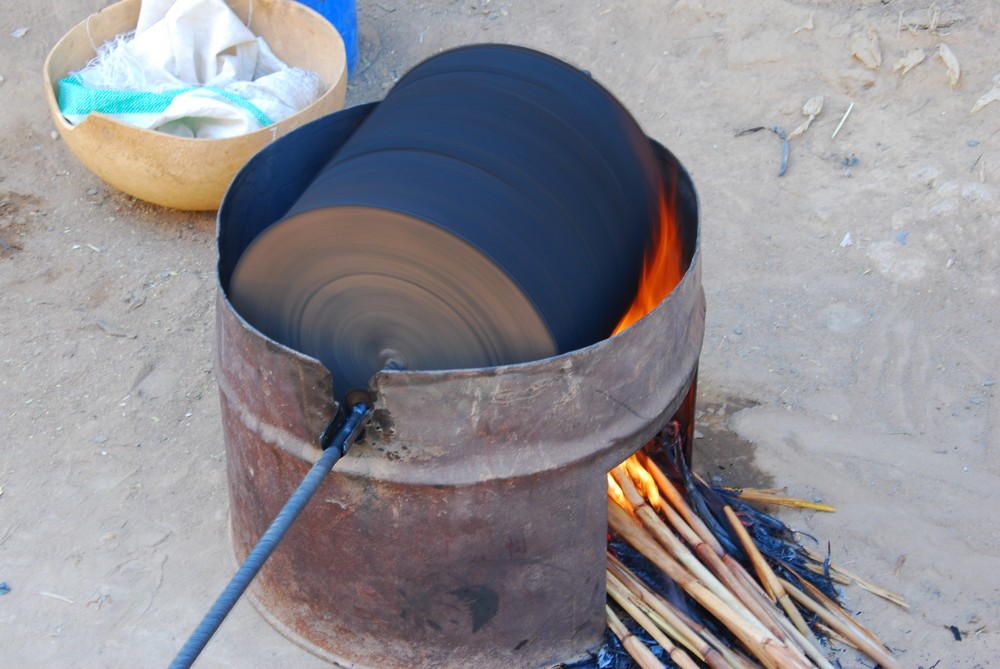 That evening we met Sori at our hotel to discuss the possibility of organizing a tour of Dogon country. We initially inquired about arranging another taxi from Djenne to Mopti but this somehow morphed into an all out Dogon excursion. When Sori arrived with his driver he behaved as if we had already agreed on a Dogon trip, which we had not. His discounted price for a ride to Mopti (around $40) was contingent upon booking Sori and his driver for a Dogon extravaganza. We still were not sure exactly sure when we would visit that area so we had to decline and settle for the bus. Frown.

Along came Hamma. Hamma is a tour operator in Mali and, as it turns out, was offering a package deal that included a three day pass for the Festival in the Desert, lodging, and a return pinasse trip (3 days) from Timbuktu to Mopti on the Niger River. All this for a bargain price of $350 US each (no sarcasm, this is an excellent deal). Of course we were a bit skeptical but started to warm up to Hamma after discovering that not only has he spent a fair amount of time in NYC but also loves Saratoga Springs and its horse racing track. Saratoga Springs is about an hour and a half from where I grew up. Small world. We had a good vibe about him so we each left a deposit of $50 to secure our tickets and lodging. We would pay the remainder when we met up with Hamma again in Timbuktu on the 5th of January. Or would we?…….(cue ominous music score)
Posted by Rich at 7:01 AM