Nov 26th, 2010 - We spent days in Nouadhibou planning our move into Mauritania's interior and addressing a mini-financial crisis. Both issues would prove to be exhausting. What to do and how to do it? The Adrar Region is a must see for anyone visiting Mauritania and the primary goal of our visit. We'd been dreaming about it from the moment Mauritania appeared on our radar. The only question was how best to see it.

Adventure is only a train ride away. Everyday a train departs from Nouadhibou and heads east, then north all the way to Zouerat where it loads up with iron ore and returns (I believe there are four separate trains in all). We were only interested in going as far as Choum where we would hop off and make our way three hours south via bush taxi to Atar, the capital of the Adrar Region. When moving at full capacity the succession of rail cars can stretch out over two kilometers and is reputed to be one of the longest trains in the world. At the very end is a passenger car that you can stuff yourself into for around $8 - $10. Or you can save your money and ride in an empty (or full, depending on which direction you ride) ore car for free. It can be an impossibly dusty and borderline hellatious 12-hour ride. We were in. Once in Atar it was there we planned to hire a 4x4 with driver to buzz around the desert.

But we had to consider option #2: Hiring a 4x4 with driver all the way from Noudhibou. Although much more expensive the freedom it would provide was rather alluring. We'd met a driver/guide at the border entering Mauritania who gave us his card. He spoke a bit of English so we thought we might listen to his spiel. His English prowess was not quite what we would had hoped and over the course of two days we engaged in a dizzying succession of discussionss that would have exhausted Middle East peace negotiators. 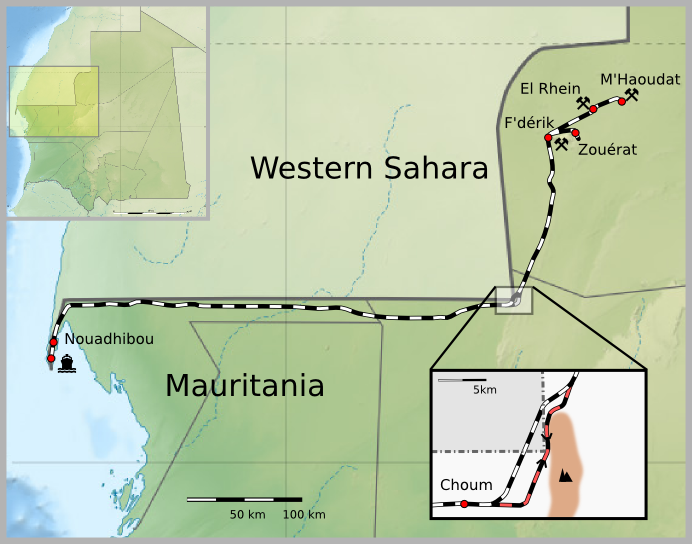 We like flexibility but Ahmed (our prospective driver) could not quite wrap his mind around the fact we were not entirely sure how many days we would require his services. We wanted freedom. He wanted specifics. His contradictions were too numerous to keep track of but we couldn't decide if he was being deliberately evasive or if cultural and language barriers were to blame. A week after returning we're still not sure. Ahmed turned out to be an indecipherable enigma.

After throwing around possible itineraries and laying out exactly what our costs would be we told Ahmed we would have to mull it over a bit. So we mulled and mulled. Then we mulled some more. We mulled while we ate. We mulled together. We mulled apart. We mulled in the street. We mulled in our room. Rarely have I mulled on such a grand scale. It was a fucking mull-a-thon.

We really wanted to experience the train but believed that having an experienced driver would allow us to get the most out of our trip. And if we went the train route we would have to carry much more cash than either of us was really comfortable with. Not such a hot idea on a train full of local vagabonds. With Ahmed we could pay upfront and not have to haul around a small savings and loan. In addition he could take us on a convenient loop leading to the capital, Nouakchott. Our feeling on Ahmed was positive and we both felt, notwithstanding our excruciating deliberations, that he was experienced and knew what he was doing. We were gravely mistaken. Fate can be a fickle bitch.

After agonizing over the options and chastising our own indecisiveness we made the decision…..to flip a coin. Best of three. Ahmed won. It would be the four of us: Me, Leslie, Ahmed, and a Toyota Heliux. Excellent. But not so fast. Cue the financial quagmire. I had no access to funds. My ATM card did not work in Morocco and was equally useless in Mauritania. However, this time it was because no bank machines accept Mastercard, only Visa (It's everywhere you want to be). Leslie had both but to make a long story short had to go online and transfer funds to her Visa account. The weekend, time difference, and banking practices of Mr. Charles Schwabb all conspired against us. We had a fair amount of dough but not enough to pay off Ahmed and certainly not enough for an extended trip. Our only hope was that by the morning of departure the money would have transferred. It didn't. Fiddleshit! After all the verbal wrangling I did with Ahmed it appeared as if we would be forced to ask him to wait another day until departing.

But, alas, Ahmed had an alternative. Pay him only for fuel during the journey and settle up after we arrived in Nouakchott. Of course we would still have to cover food and lodging but it appeared we had enough cashola to cover that. His flexibility concerning money led us to believe we had made a wise decision. Fate can be a twisted fickle bitch.

Ahmed was exceedingly accommodating, almost suspiciously so. Why? Well, as it turns out, he was hoping to beguile Lelsie, convince her to marry him, bear his children, and run the Auberge he was planning to open. Think I'm joking? Nope. Not even a little bit. We had nary a clue. Looking back part of me wonders if he was not scheming to assassinate me and bury my body into the desert. Good thing Leslie likes me and found little interest in becoming Ahmed's bride. Good thing. Fate might be a fickle bitch but Leslie is most certainly not. Pheeew.