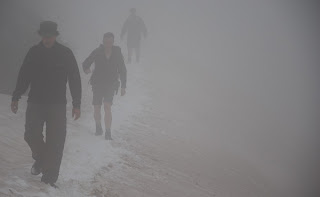 June 29th, 2010 - A little over two weeks ago I had the pleasure of visiting the town of Gori in Georgia, the birthplace of Russia's most infamous leader (See “Little Joey Stalin”). Anyone visiting would no doubt be struck by the existence of a 20 foot statute of Joseph Stalin situated, appropriately, in Stalin Square. Or should I say 'would have been struck'. Joey got the boot (Actually, they used cables, one around the neck, another through the armpit).

Under cover of darkness the authorities uprooted Mr. Stalin, threw his communist ass on the back of a flatbed truck, and drove off into the night (Georgia Knocks Stalin Off His Pedestal). Later, alligator. Might want to go ahead and rename the square in order to complete the circle.

I was fortunate enough to meet three gentlemen from Belgium in the village of Kazbegi interested in a hike part way up Mt. Kazbek (5047 m, 16655 ft). Our destination was either the beginning of the glacier or, weather permitting, Betlemi Hut, a former meteorological station. Ideally, I would have preferred to make my way to the summit but seeing as this is a three or four day affair and requires the use of ropes I had to content myself with half-assing it.

The myths and legends associated with this extinct volcano are as thick as the mist we encountered on the way. It seems the cave not far from Betlemi Hut was the prison of choice for Amirani (Georgia's version of Prometheus) the insolent son of a goddess that had the audacity to share fire with mere mortals. The cave is also reputed to have housed the tomb of Christ, Christ's manger, Abraham's tent, a golden cradle, a monkey paw, Merlin's cap, and Excalibur (I may have added the last three out of a childish sense of blasphemy). Apparently, only the pure of heart are permitted to view these objects while all others that attempt to do so perish or go blind. Since I have no desire to do either I decided to postpone my cave visit for a few years. I figure by then I'll have had a chance to purify myself through pain.


For many years it was considered taboo to climb or hunt on the slopes of Mt. Kazbek. Luckily for us members of the London Alpine Club, having no respect for local traditions and customs whatsoever, decided to make the first ascent in 1868 thereby blazing a trail for all the asshole foreigners to follow. I am assuming taboos no longer exist as it is possible to book guided expeditions in the village of Kazbegi. Then again….

Unfortunately, the weather was not particularly cooperative as mist shrouded the peak for most of our trip. Probably could have done without the cold drizzle that blanketed us on the way down also. On the way up we encountered a few groups that had made unsuccessful attempts to reach the summit. No one looked particularly jolly and a couple of folks appeared to be on the brink of snarling. I supposed if I'd dropped a couple hundred dollars and did not make it to the top I'd be a bit truculent myself.

We failed to make it to Betlemi Hut but did forge a good way up the glacier. We were uncertain as to time and we ascertained that the view would be negligible even if we did make it to the hut. So we made our way back to the village. Maybe next time (after my purification).

"The fear of death follows from the fear of life. A man who lives fully is prepared to die at any time."
— Mark Twain 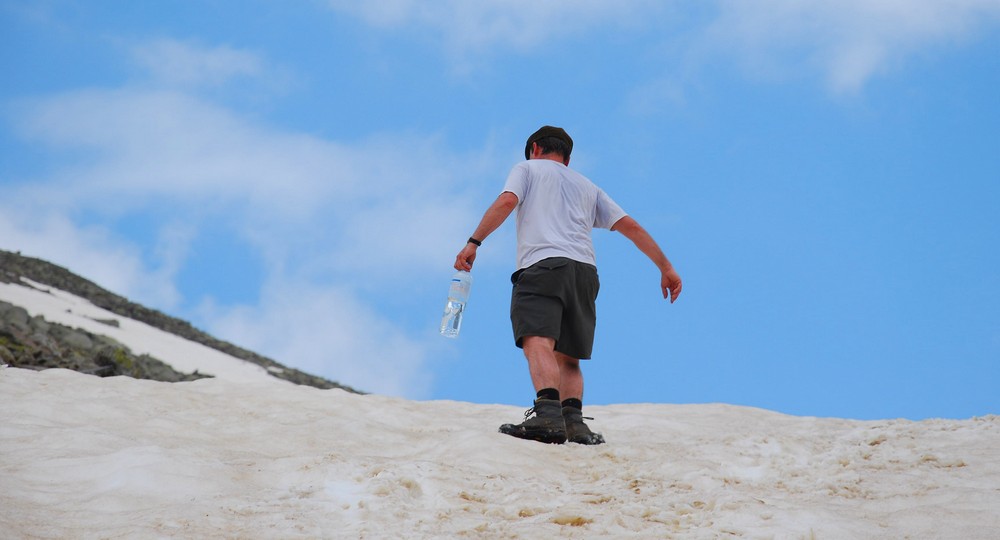 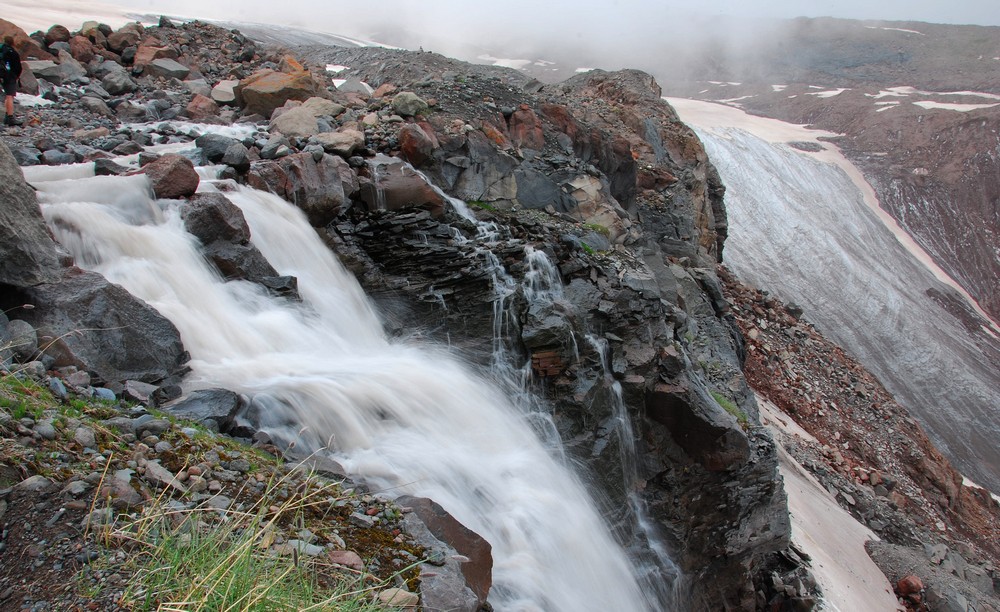 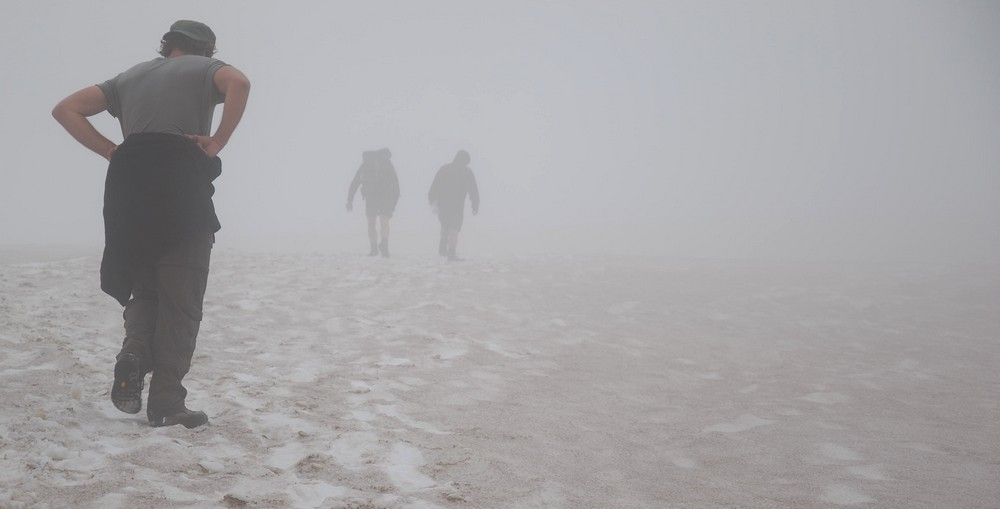 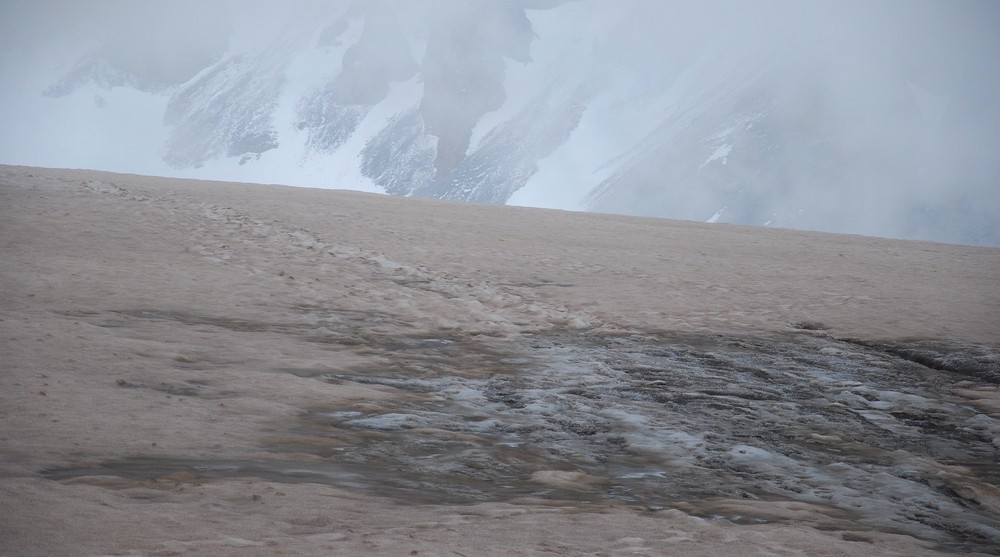 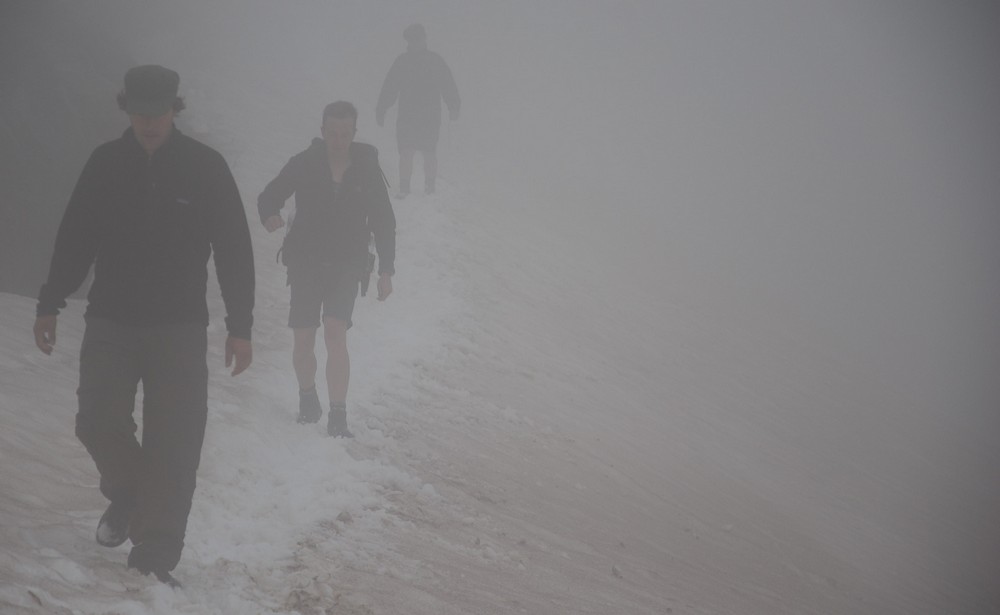 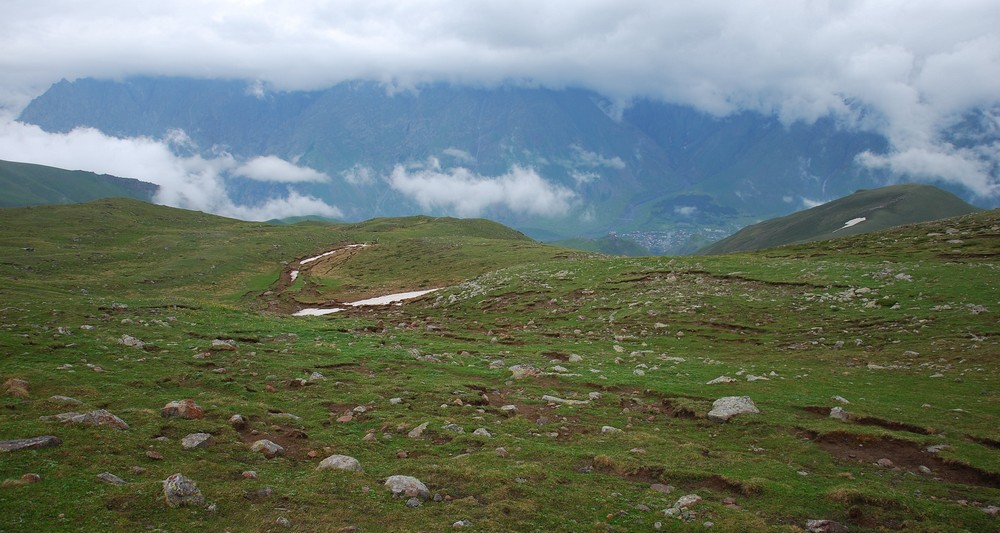 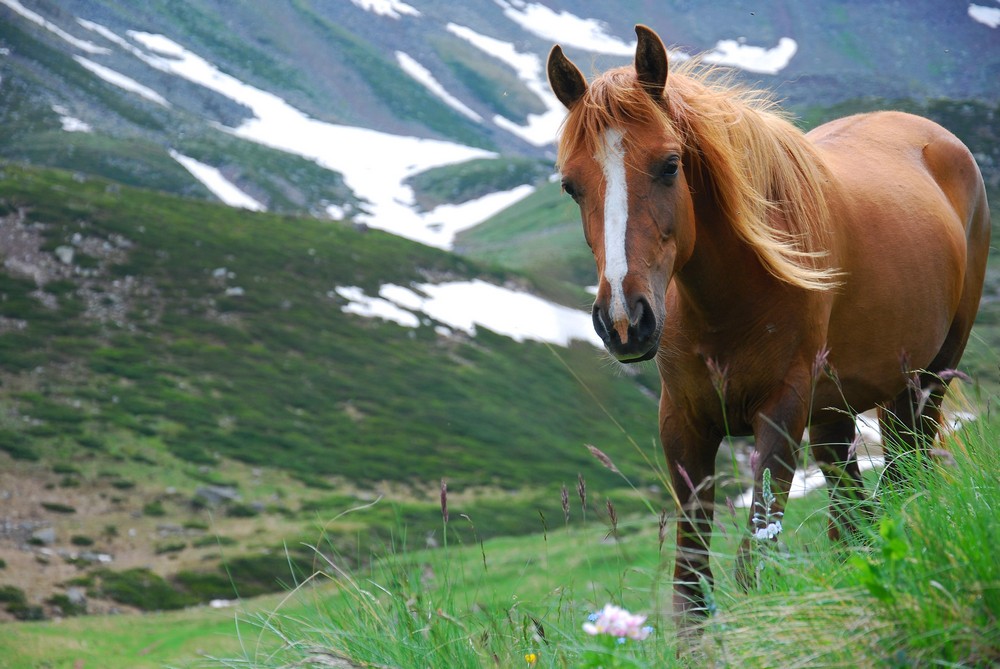