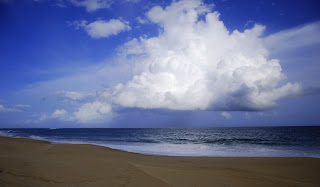 For a revised version of this post, go here.
From Tissamaharama to Marakolliya Beach. I've encountered my Sri Lankan paradise and it sits along the southern coast on a perfect beach. If you ever make your way here you must check out Mangrove Garden and Cabanas (www.beachcabana.lk). Owned and managed by a German woman (Miriam) it is a truly special place. Leaving may be problem. I have not worn a shirt since I arrived. I am sure there are more beautiful beaches but I have yet to see them.

The incessant crashing of the waves is music to my ears and although the beach is not really suitable for swimming for me it is perfect. Nothing like getting thrashed by an ocean wave to get the blood pumping. The trick is to let the wave take you off your feet and then recover into a subtle jog as it brings you across the sand. While playing what I like to call ‘tsunami’ (probably not the most politically correct name considering where I am) I am prone to bouts of maniacal laughter. Sure I have wet sand in every crevice of my body but this is a small price to pay for zany fun. 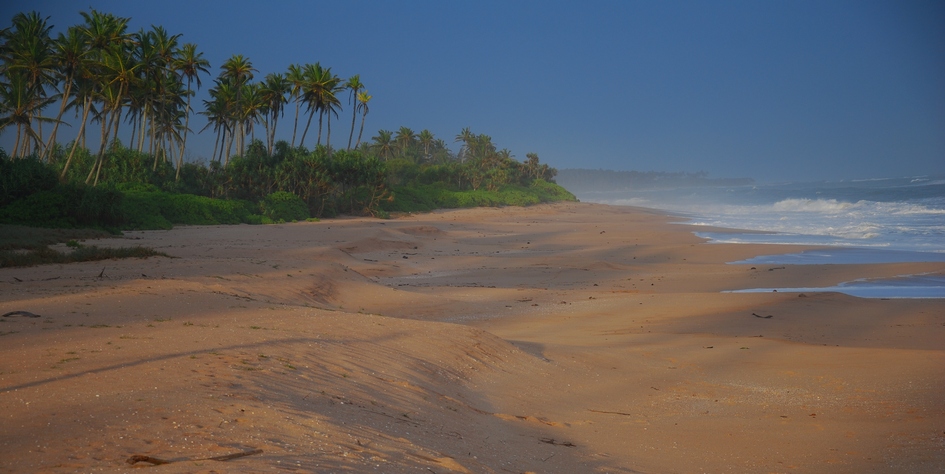 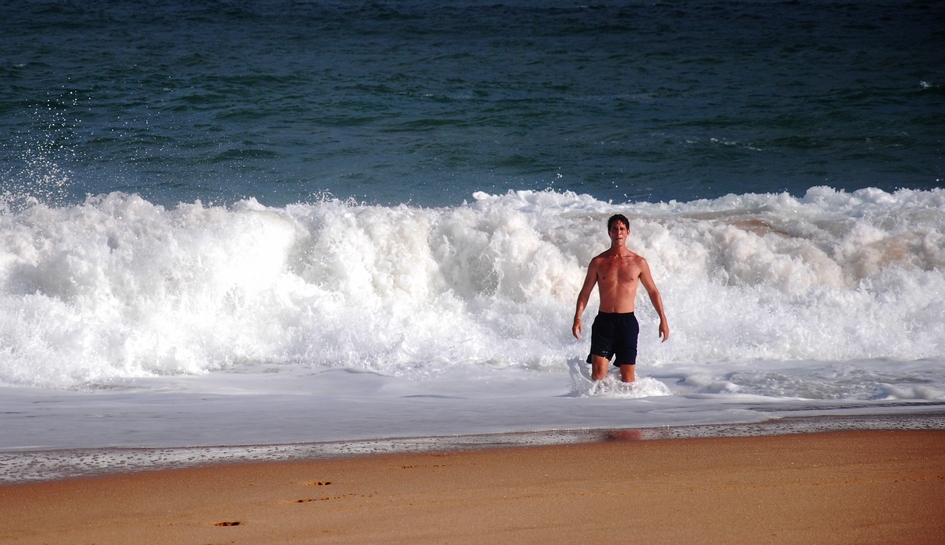 Ever walk along a deserted beach under the light of a full moon amid the thunderous crash of silver-hued waves? No? Well, do it and get ready to live. Magnificent. Want to feel alive, almost like you’ve been transported to some chimerical realm? If so, then I highly recommend it. You don’t need Zoloft. You need Marakolliya Beach. 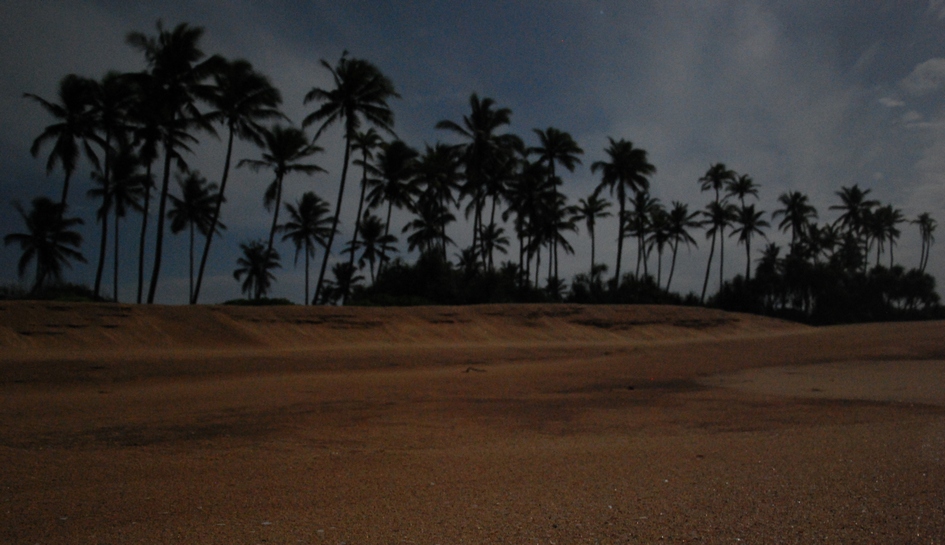 Today as I propelled myself into nature’s own salt water washing machine I was treated to multiple rainbows (including a double-decker) in the afternoon. Sometimes all you have to do is step outside. 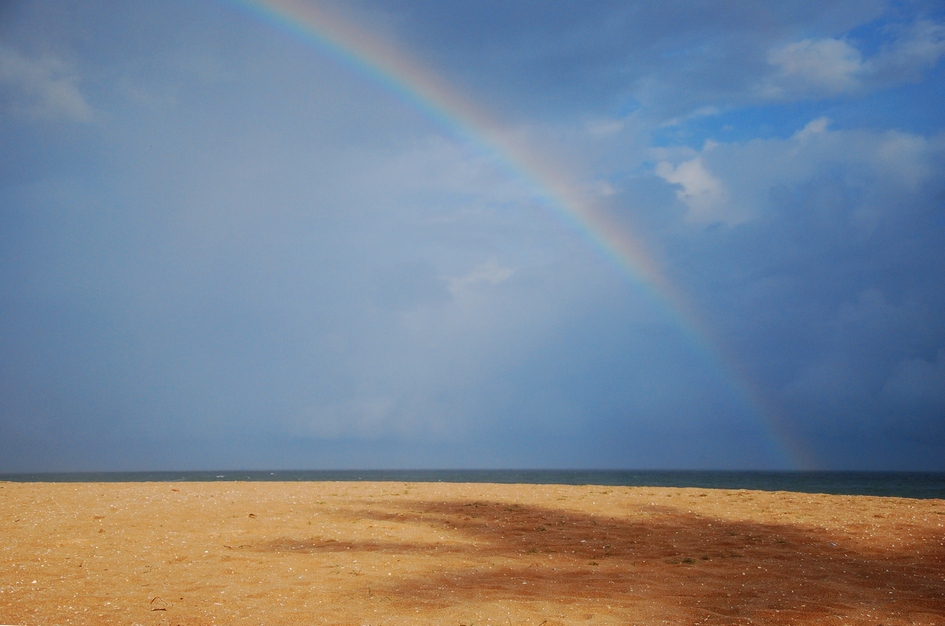 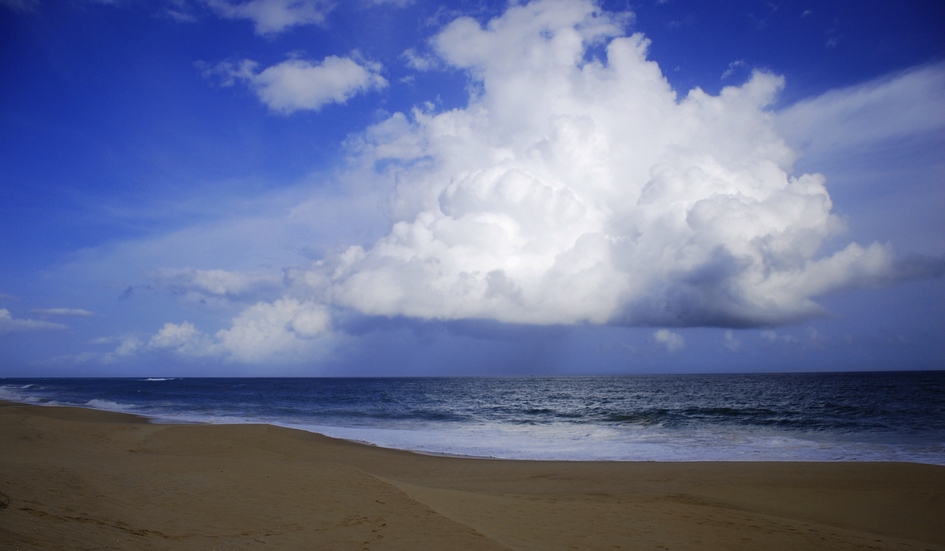 I spent most of the day dividing my time between eating, walking on the beach, and snoozing in a hammock. There are worse places and much worse fates. Tomorrow I will go see something. Or maybe the next day or the day after that. There is a rock temple, a blowhole, and mangrove lagoons to explore but I may have to dig deep to leave the beach. Help me Obe Won, you’re my only hope.

The bathroom in my cabana is underground. The door to reach it is actually in the floor of the cabana. It opens like a door to a root cellar or bomb shelter. When I lift the door to tinkle I like to pretend we just hit Def Con 5. The door is fairly weighty and if you were to leave the door up at night then going to the toilet could turn deadly. I was told a gentleman did in fact fall down the stairs and injure himself one night when he did not see that the door was up. I think going to the bathroom should be more dangerous. It is always more gratifying to feel you’ve earned your bowel movement. 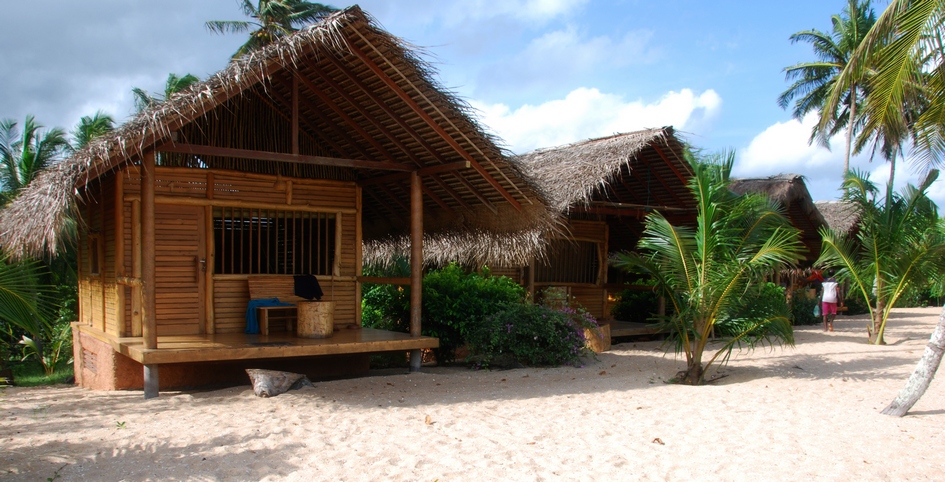 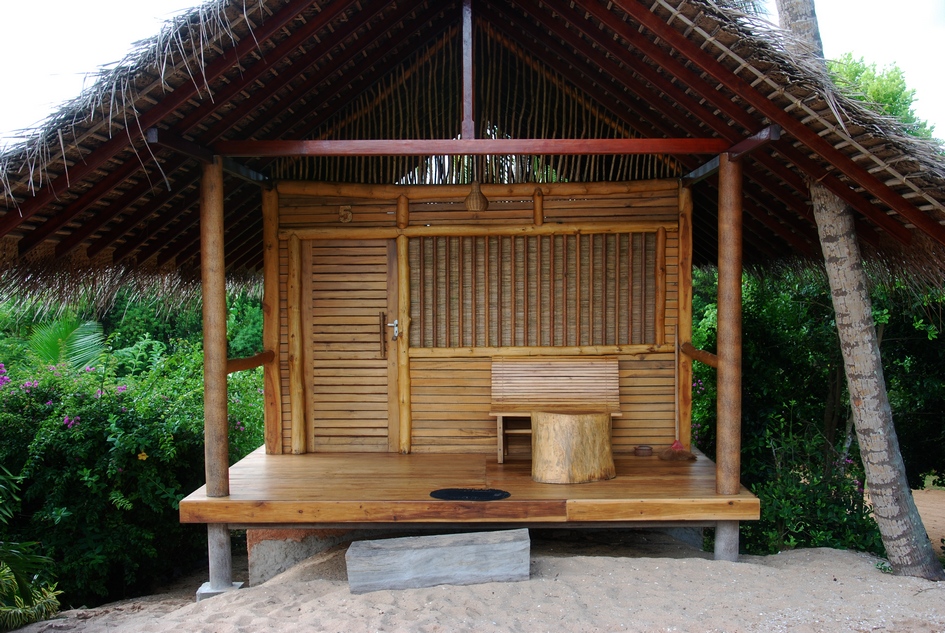 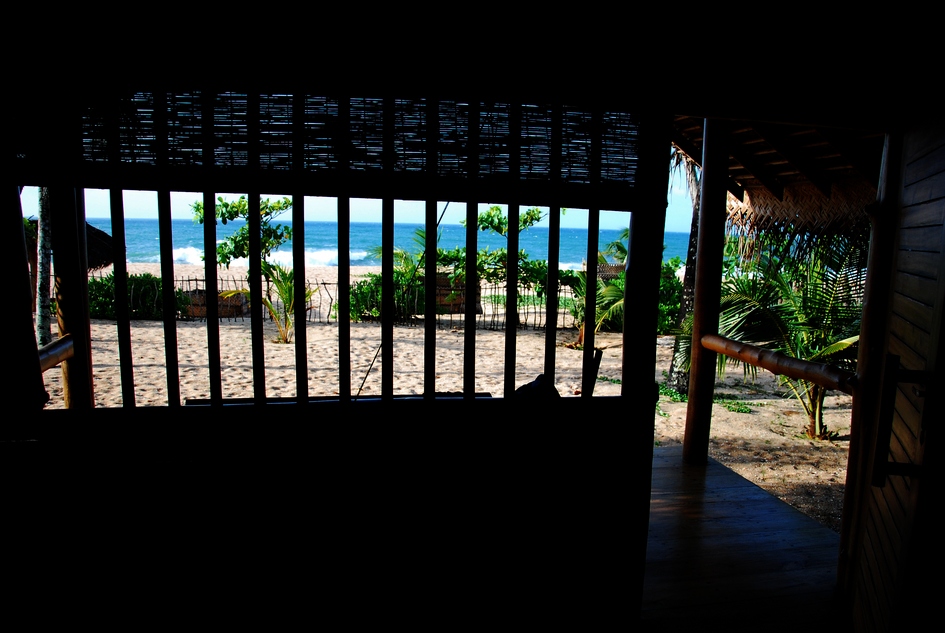 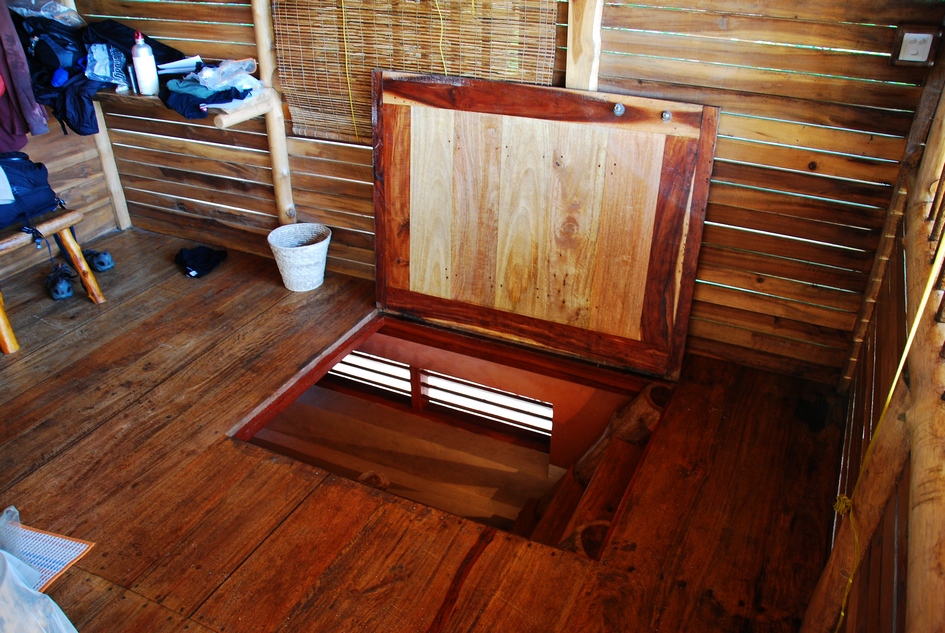 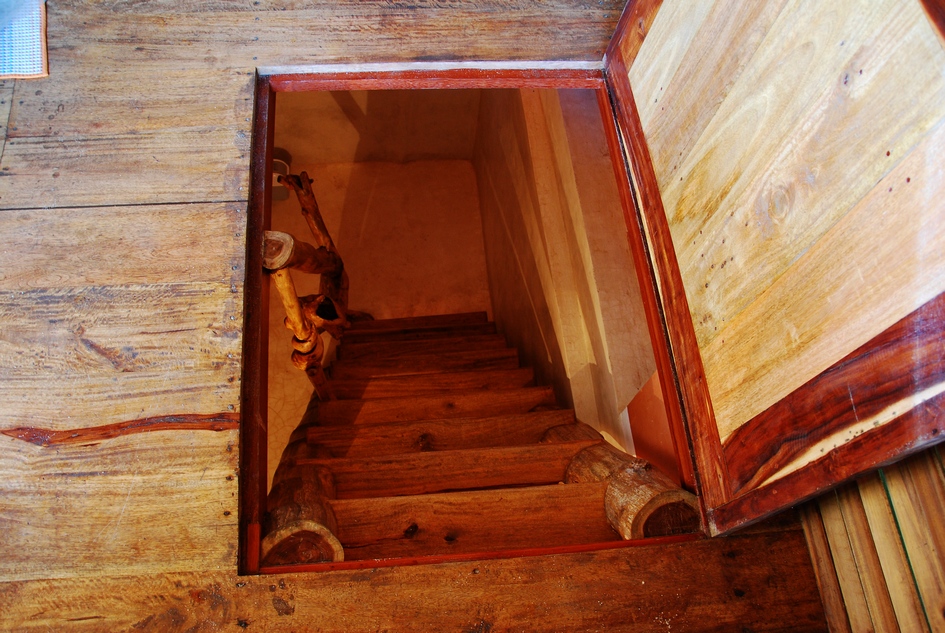 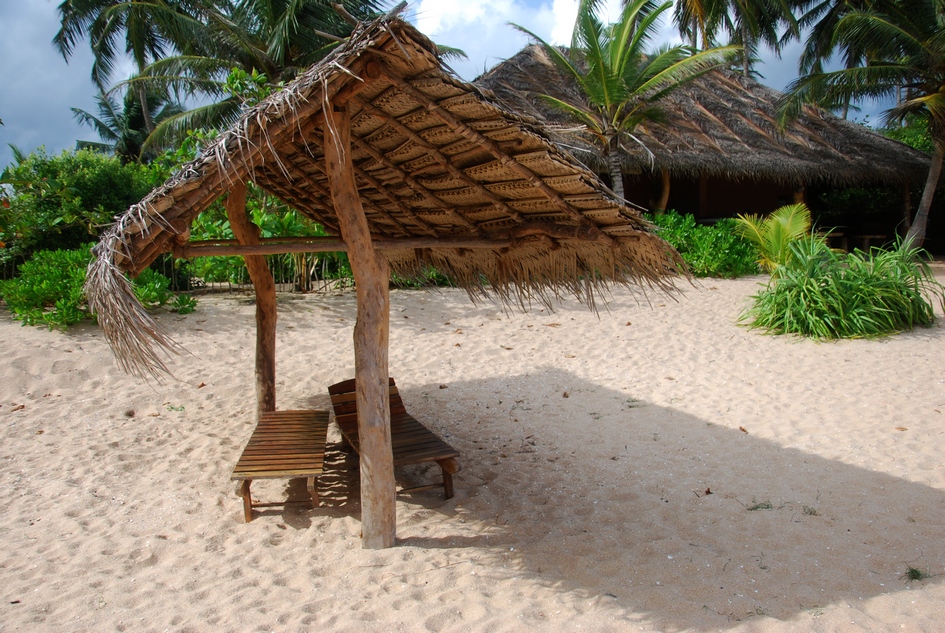 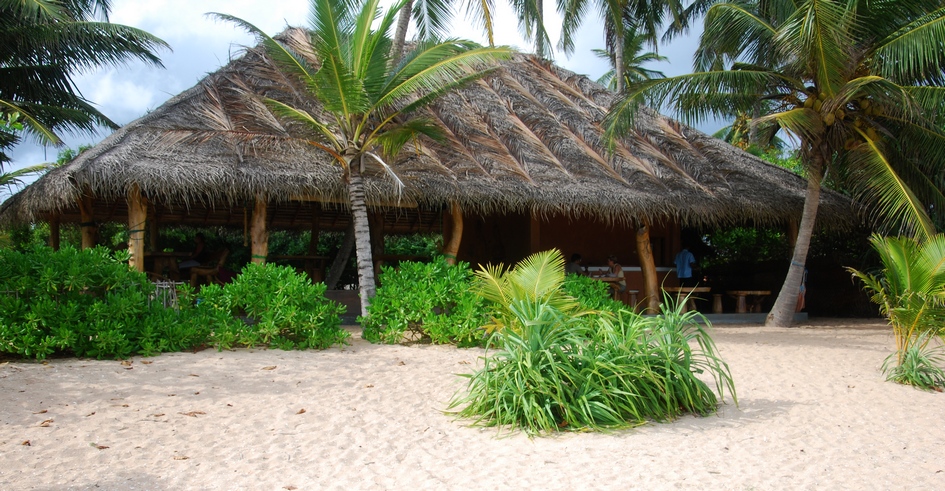 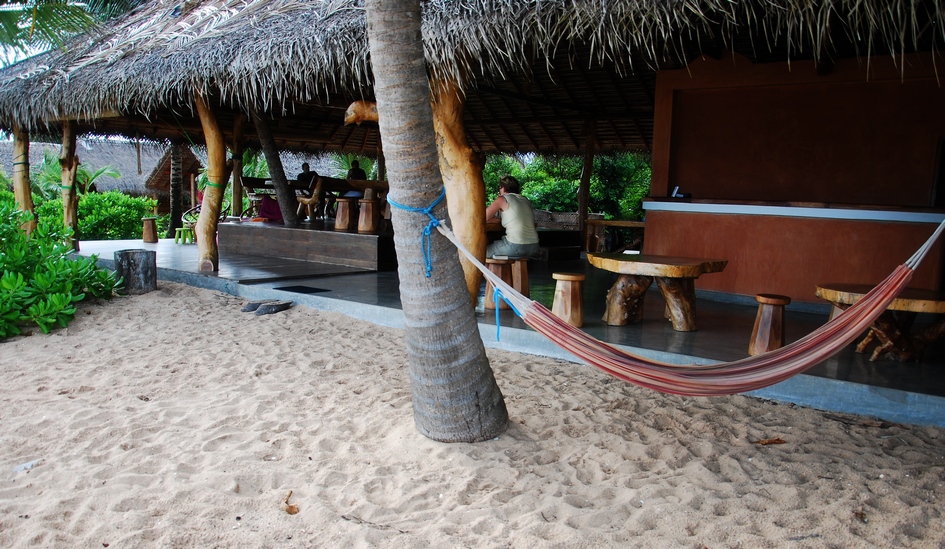 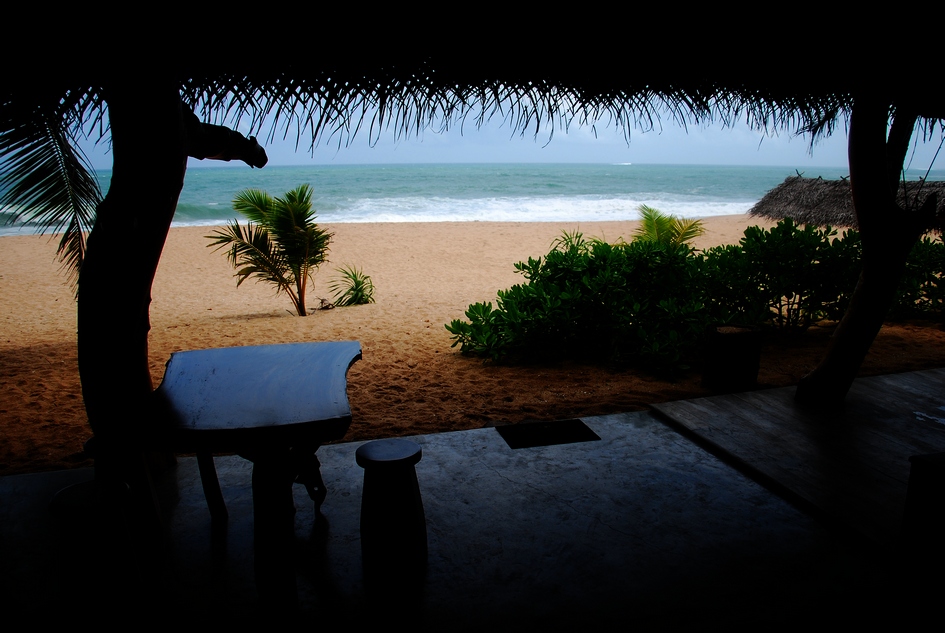 It turns out the owner (Miriam) was here for the tsunami in 2004 and she has a fascinating tale to tell. After finishing breakfast on that fateful day she was in the kitchen (in the restaurant of her small guesthouse if I am not mistaken) when she suddenly and most inconveniently found herself submerged under a few meters of water. She does not really remember exactly how it went, only that one minute she was in her kitchen and the next swirling around underwater. She told me swimming was extremely difficult because it was impossible to determine what was up and what was down. What seemed like an eternity was probably only tens of seconds at the most but she was to find herself on the ground outside next to a tree, which she promptly climbed.

It was here that she saw the next two much less intense waves roll on by. Fearing that more was yet to come she sat up there for the better part of an hour before finally descending. She was injured (her lower leg had been cut open), almost blind (she lost her glasses), and practically naked (only a bikini swimsuit). Luckily, one of the locals she employed (a young male) was in a nearby tree and came down to lend a hand. He and a friend got her to the road, on to a motorcycle, and to a medical station…..where she was told they could do nothing for her.

There are many of these little quasi clinics all over Sri Lanka and they are perfect if you have a slight fever or a small boo-boo. Miriam had a big boo-boo. So they put her in the back of an ambulance and brought her to a small hospital farther west. This place was not much better. No antibiotics, no painkillers, and no anesthesia to do the minor surgery necessary. Super. She was not considered critical and put on the back burner (probably a correct analysis but it is difficult to make such an assessment without actually looking at the injury).

When it was clear that this place was not going to cut the mustard she pleaded (in between bouts of agony) to be brought to the hospital in Colombo. They started the trip but had to turn around because they did not have enough fuel. Fuel was a problem. All the tanks along the coast were contaminated. The second time was the charm as they found a truck that had a full tank. It took all day but she did finally make it to the hospital in Colombo.

One of her Sri Lankan friends that helped her on her quest to reach Colombo had a hell of a time getting to her after the tsunami struck. He was lucky enough to see the wave coming and quickly made his way up a coconut palm tree. After he felt it was safe he descended in a frantic attempt to find his friend Miriam. The area was flooded so he thought it would be a good idea to find a boat. He actually ran along the beach for quite a distance (she was not specific on the length but did say that afterward both of them were amazed by the distance he covered in such a short time) to a navy station in hopes of finding a small vessel. He found some but they were all either smashed or stuck in trees. No luck there.

So he ran back to try to find her. After numerous inquiries about her status he was told by a misinformed bloke that she was dead. When he discovered it was a case of mistaken identity (actually the person in question looked nothing like Miriam) let’s just say he was less than amused. Eventually he did catch up with her at her second stop and was instrumental in getting her to Colombo.

Miriam’s sister had just ended her visit and actually flew out that morning. When she heard what had happened she tried to fly back but the airport was closed and all the flights canceled. For more than a day Miriam’s family had no word on her status. She wanted to call but none of the phones at the hospitals could make IDD (International Direct Dialing) calls. Apparently, they did not have the right plan (Where’s AT&T when you need them?). It was not until her pain subsided and she was thinking clearly that she thought to have her doctor send an SMS to her sister in Germany.

How’s that for a tale?

Miriam purchased land on this beach for 60,000 euros (around $85,000). A company wants to build a five star hotel on the site where she currently has chalets. They offered one million dollars. She said no. I like Miriam. She does not believe that a five star hotel belongs on this beach. I agree. Having to pay $500 a night or more to spend time here is bullshit.

Miriam has five dogs, guard dogs that is. If you are Sri Lankan and the dogs do not know you then you have much to fear. I was told that Sri Lankans cannot stay in the rooms on account of the dogs. Tourists are okay. Even those not staying on the grounds will get only an intimidating (and I do mean intimidating) rush and howl if they cross the beach in front of the cabanas. All bark and no bite……unless your skin is dark. Ask the postcard guy who peddles his wares on the beach. That is not to say that if you are a tourist you should try and sneak onto the grounds at night for fun. In all likelihood the color of your skin would cease to be a factor. And if you are a stray dog then every step you take in approach of this place could very well be your last. These dogs will show no mercy.