So where was I? Hanoi. We returned to Hanoi on the 29th in order to begin our boat trip to Halong Bay on the 30th. Typhoon Ketsana had something to say on the matter. Our boat trip through Halong Bay was canceled and it appeared that there was little chance we could reschedule. The forecast was little more than a repeating sequence of ‘Thunderstorms/Rain” for seven days. Super. Luckily, whoever is forecasting the weather in Vietnam does not know shit from shinola (our trip to the mountains in the north was also supposed to be plagued by rain but we saw almost none….thankfully). We booked a tour for the 1st of Oct that went ahead as scheduled.

The bus from Hanoi was a tad bit odd. One of the guides was hell bent on providing the folks on the bus with all sorts of interesting factoids about Hanoi and Vietnam. Normally, I would have been genuinely interested but his voice was so incredibly irritating that I was on the verge of offering a cash payment if he would be willing to cease and desist. I was not surprised to discover that others shared my sentiments.

Before making a pit stop we were given a rather depressing story about the plight of children disabled as a result of all the nasty shit the American military dumped on the country during the war, specifically Agent Orange. The market where we stopped was established with these kids in mind and much of the proceeds are supposed to bridge the gap left by the insufficient funds provided by the Vietnamese government. It was a little awkward after we arrived and our guide asked me where I was from. “Uhhhh..ummm….A-mer-i-ca.”

Halong Bay is a beautiful place and well deserving of UNESCO World Heritage status. Almost 2,000 limestone monolithic islands rising from the ocean and topped with jungle vegetation . The natural forces that conspired to create this wonder are varied and numerous. The local legend credits the activity of dragons for the origin of the formations. I did not see any.


There are a number of floating fishing villages that exist in the channels of Halong Bay and the adjacent Lan Ha Bay. The locals live most of their lives floating on their boats or in their floating homesteads. It is hard to imagine such a life but I suppose if that is all you know then it ain’t no thang. Fishing and tourists are the core of their existence. There are probably more tourists than fish. Tourism is taking its toll. Good for the locals, bad for Mother Nature. 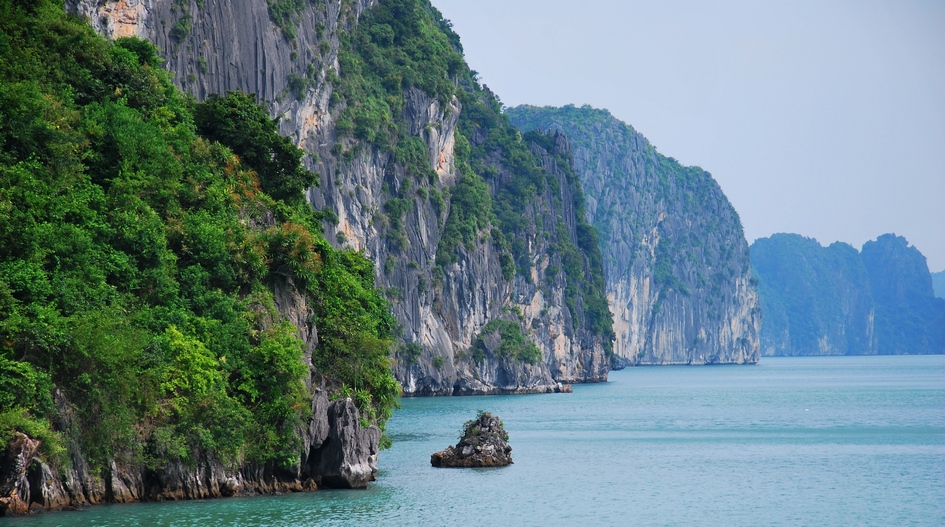 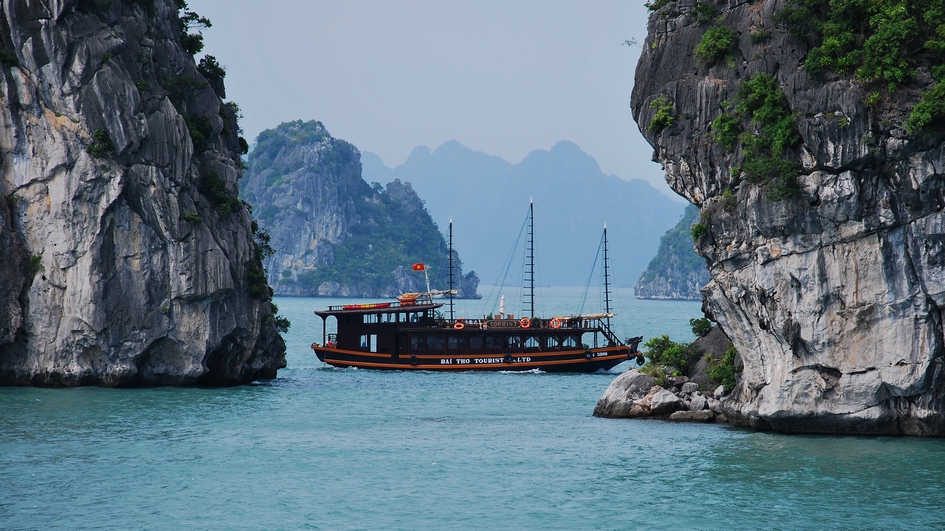 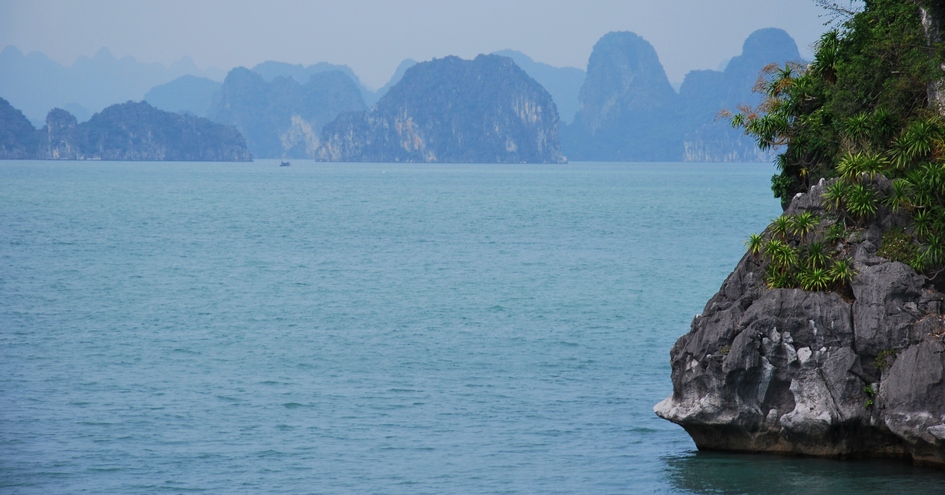 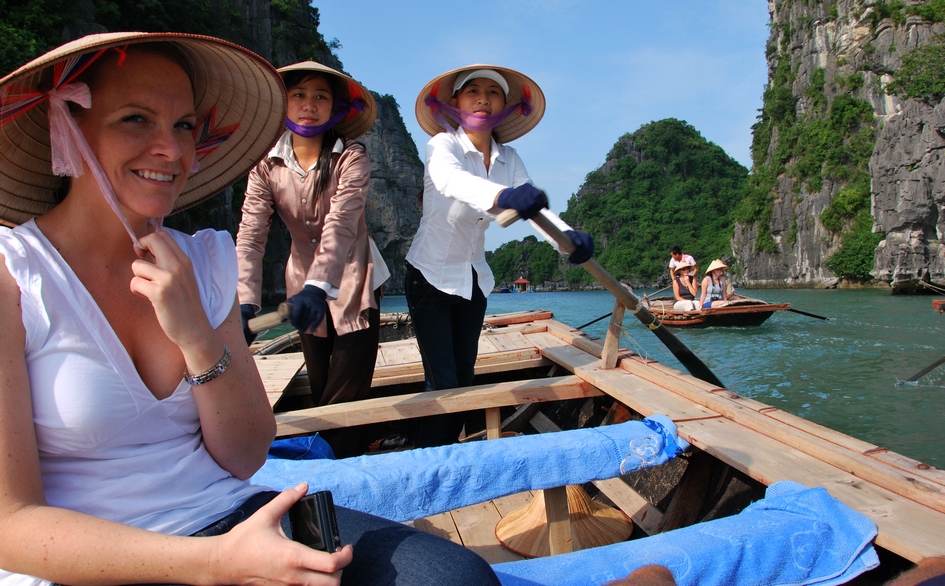 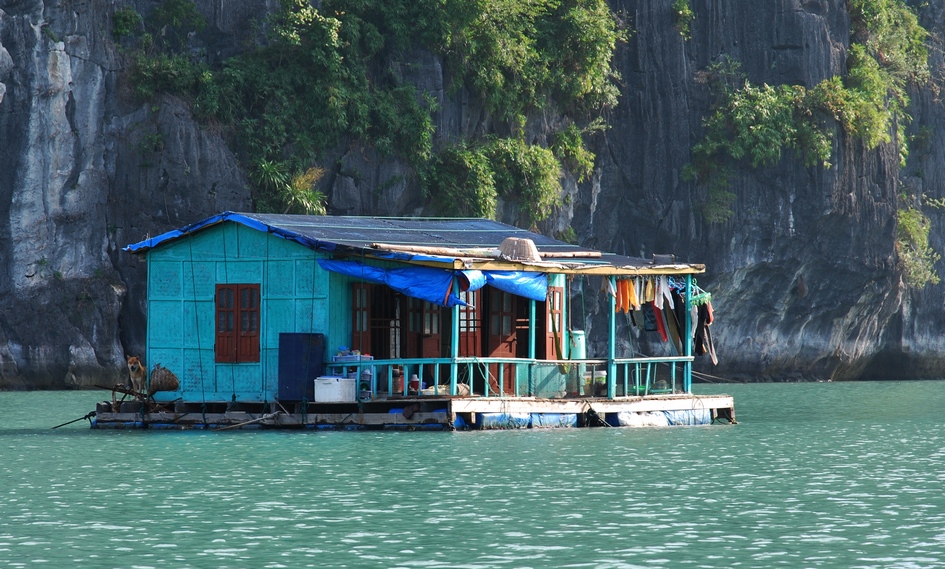 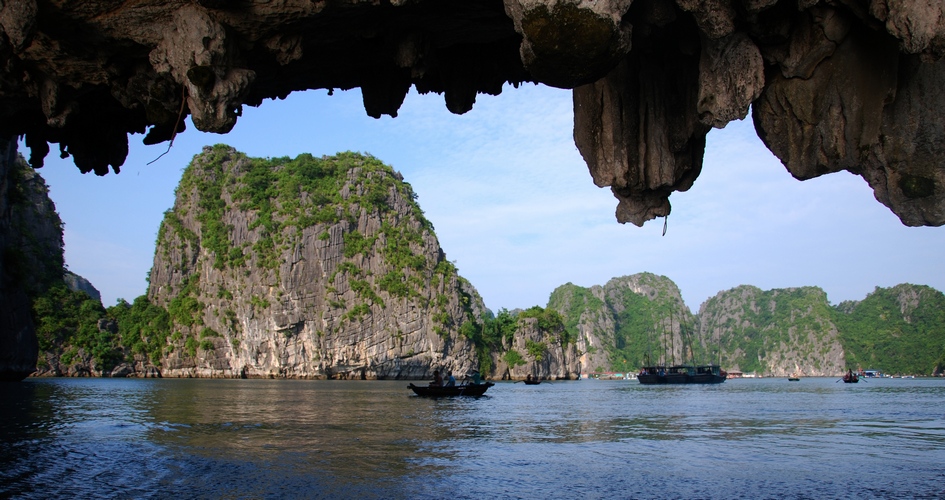 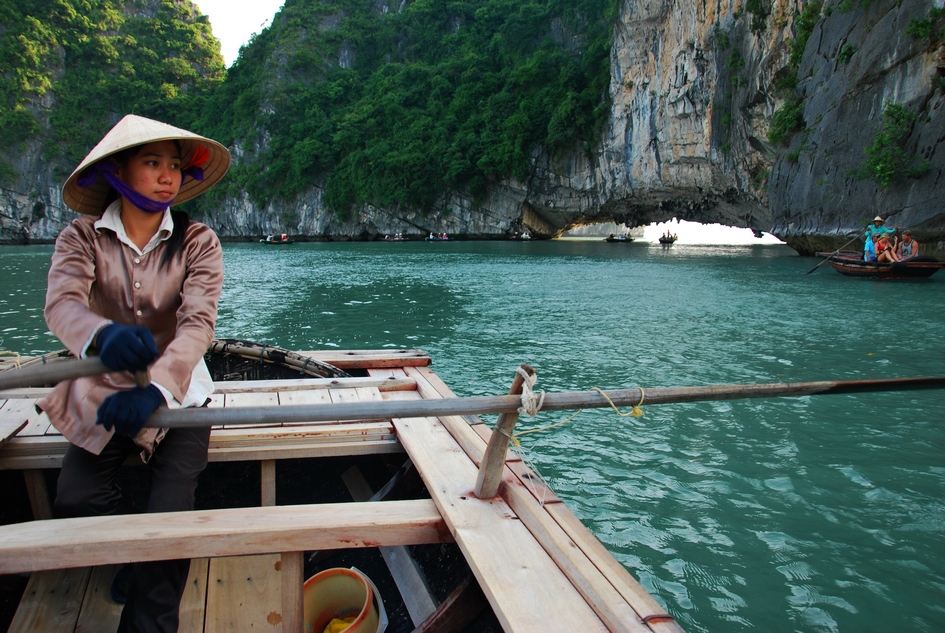 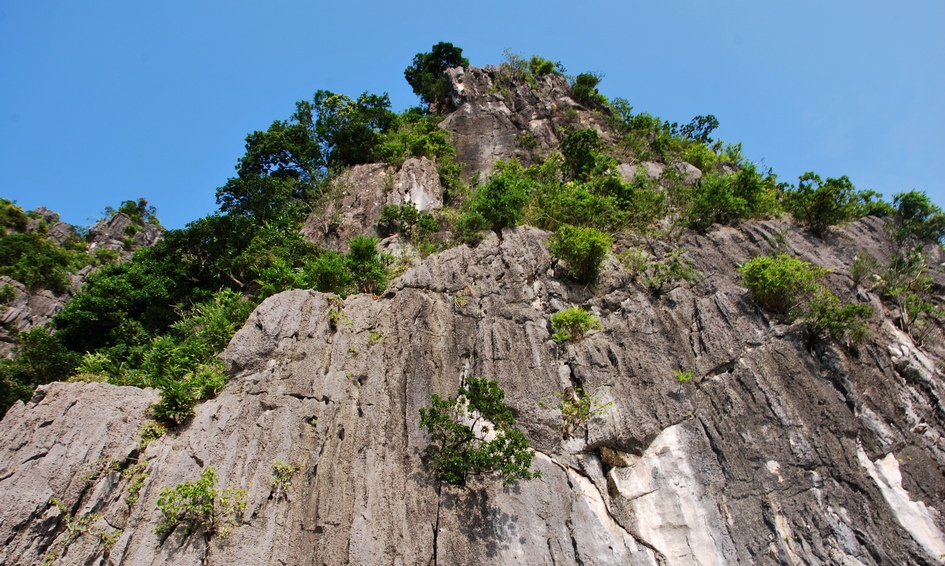 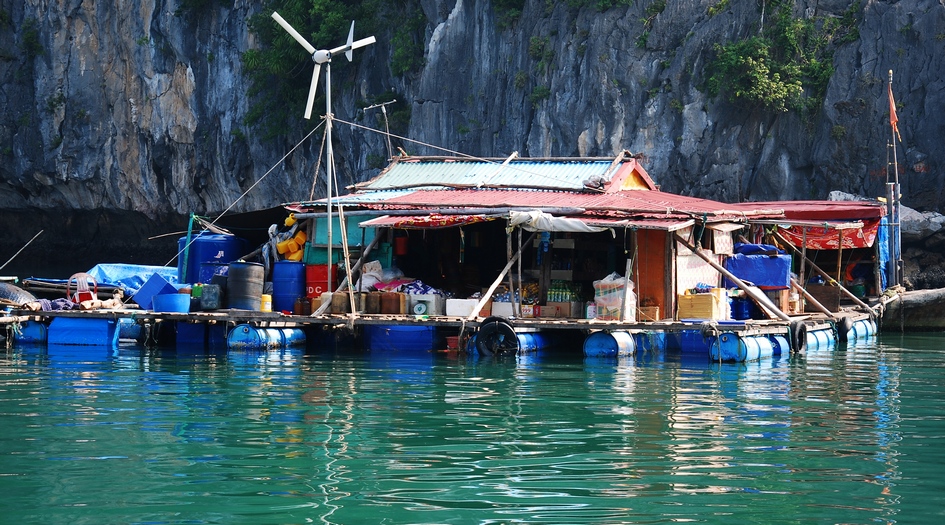 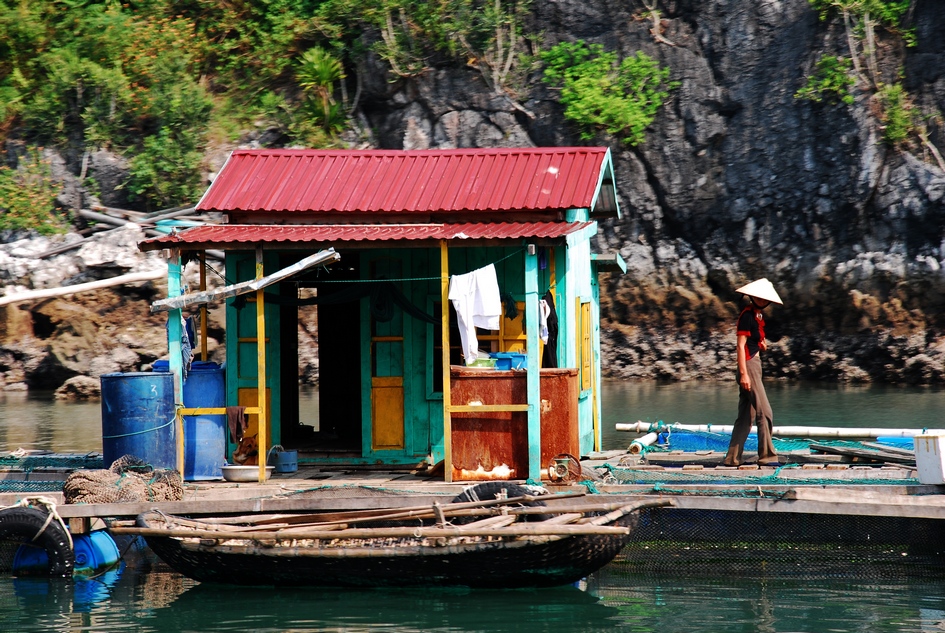 We spent a few days on Cat Ba Island, sitting by the pool, exploring via motorbike, and taking a cruise through nearby Lan Ha Bay and engaging in a bit of rock climbing. The only thing better than staring at the limestone karsts is climbing them. I am no expert but luckily as long as you have some competent instruction any idiot can have a go. I was the idiot on that day. I was fortunate to have some interesting folks on the trip and all in all it was a rather enjoyable venture. 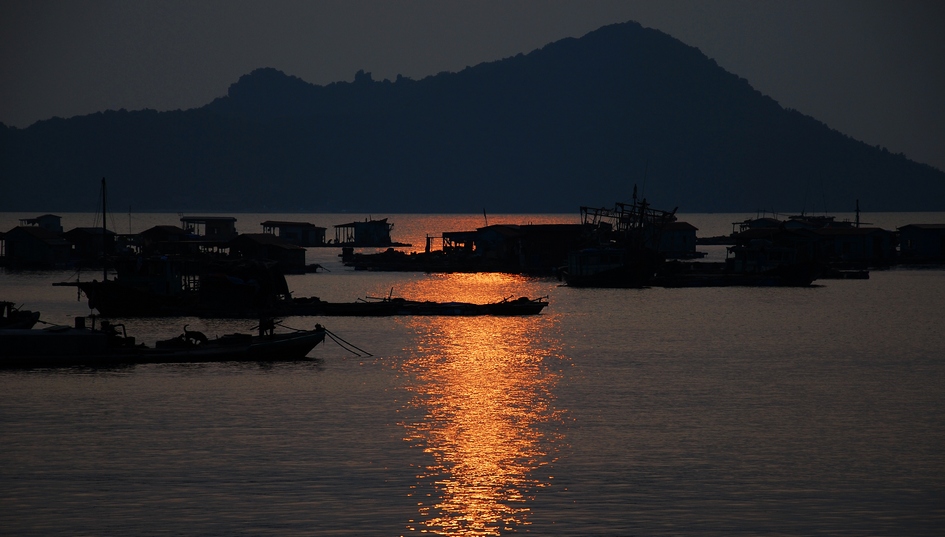 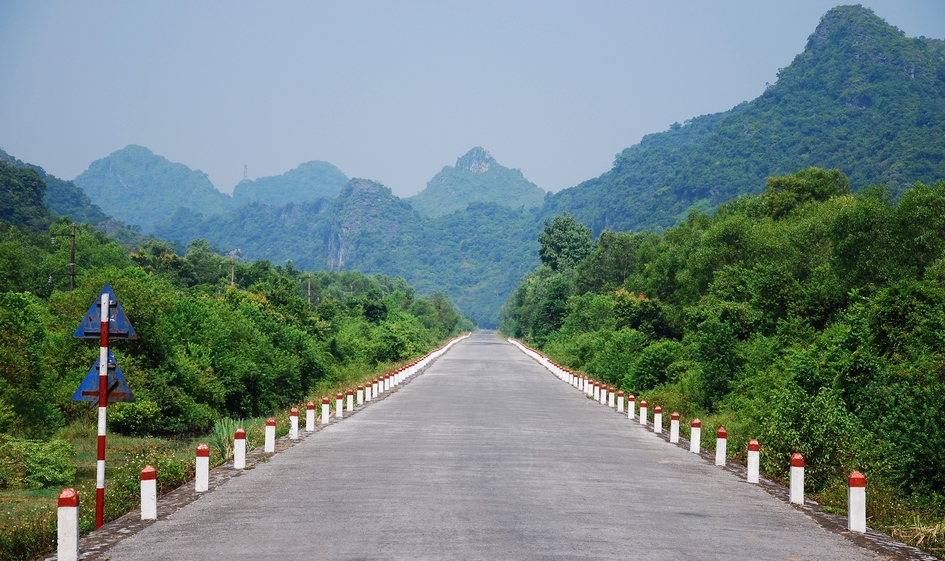 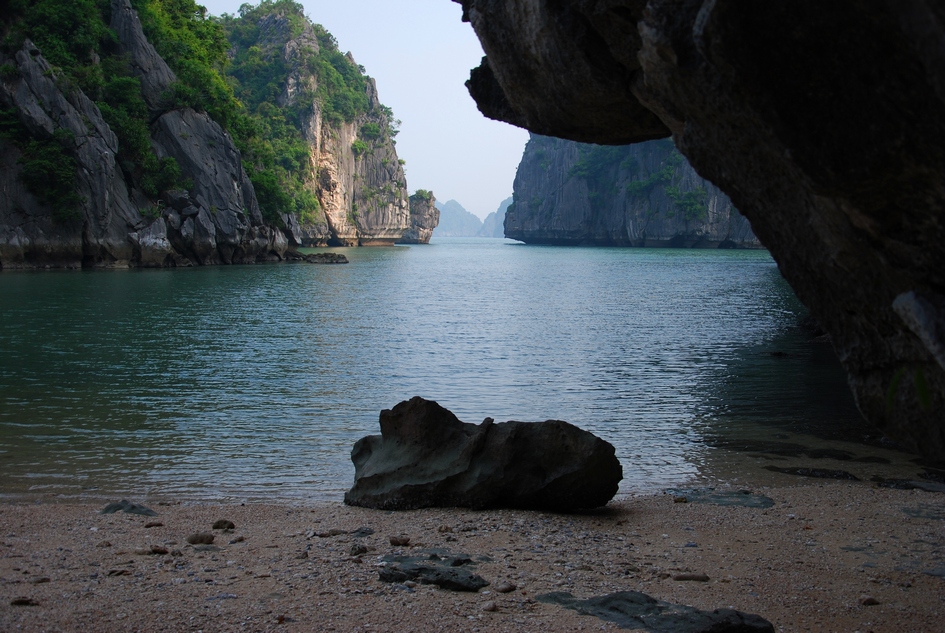 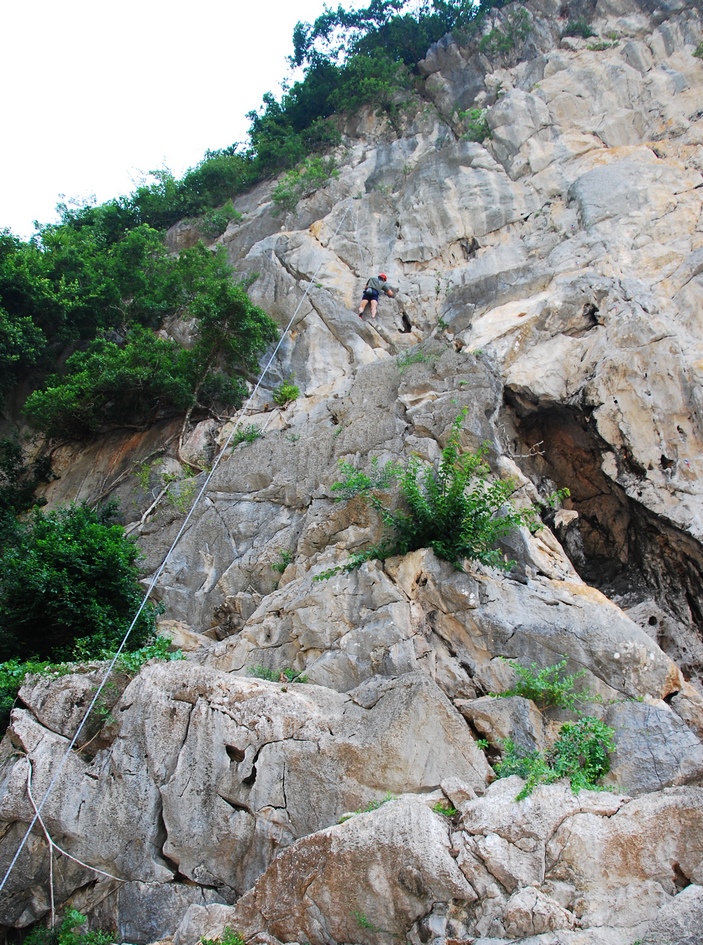 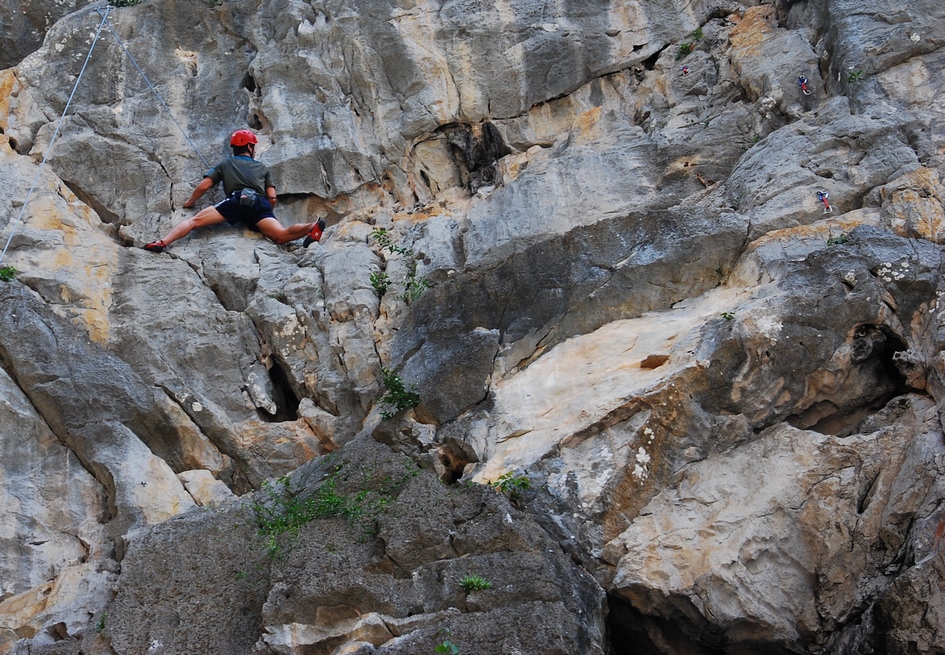 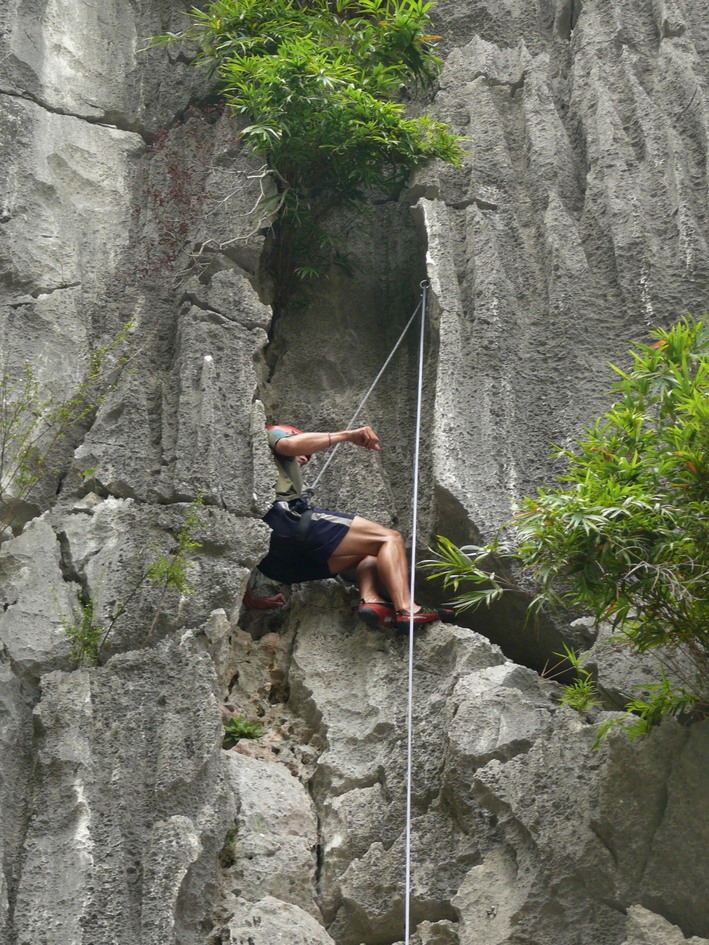 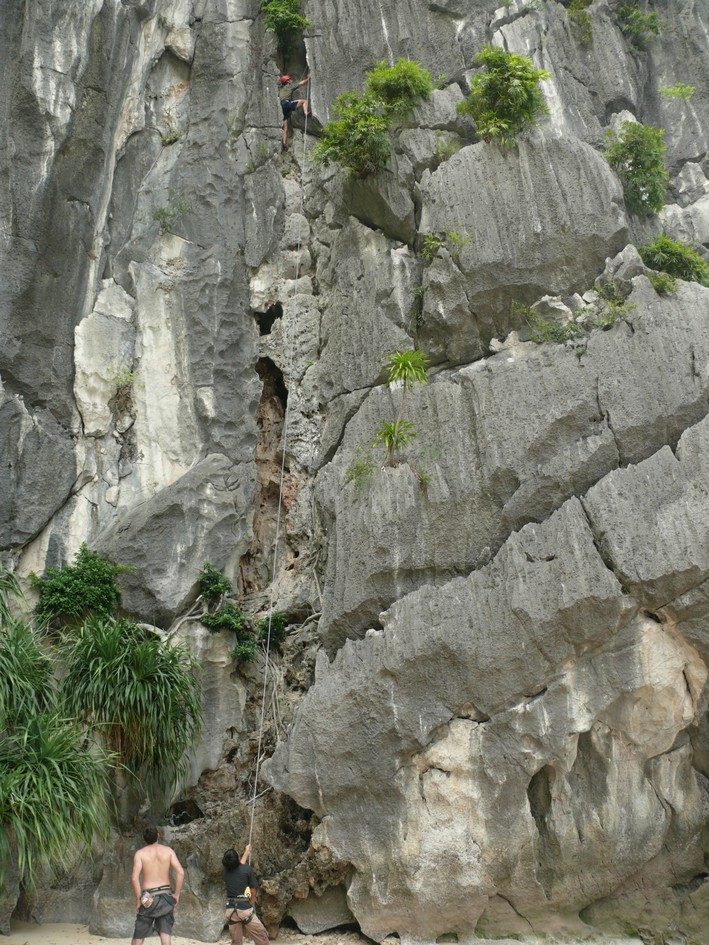 One of the people I met was a South African climber who had a fantastic tale to tell concerning his life back home. About a year ago while heading to his girlfriend’s house in Capetown he and his female friend were carjacked on the street. They turned over everything they had but the jackers still insisted on inviting them along for the ride. And what a ride it was. They were driven around for a time with a stop at a pub in the suburbs so the drug laced nutbags could show off to their friends and do donuts in the parking lot with their newly acquired SUV.

After the show the two were then stuffed into the trunk while the psychos pulled up to a bar and had a few drinks. There just happened to be a policeman at the bar who noticed that something was awry. He made his move and the vehicle was recovered. However, the hostages did not realize that cops had taken possession of the vehicle for they were speaking the same language as the hijackers. It was not until the car arrived back at the police station that the two kicked out the back seat and made their presence known. At the time the cops thought that they might have had something to do with the theft and were treated accordingly (talk about unlucky). After everything was cleared up the two finally made their way to his girlfriend’s birthday party and drank accordingly. I was told this story with the same kind of enthusiasm one might recount a bowel movement. Incredible.

One of the owners the rock climbing outfit (SloPony Adventures) is just now recovering from Dengue Fever, a mosquito-borne disease that you do not want. It was his second time contracting the disease and it took its toll. They moved him from Cat Ba Island to Hanoi where he remained for a few days but when his conditioned worsened they evacuated him to Bangkok where he spent two weeks in the hospital. He told me there had been 3,000 cases recently reported in Hanoi. Although I have insurance it does not cover medical evacuations so I purchased a policy from World Nomads just to be safe. Had rock climbing guy not had insurance it would have cost him $24,000. That opened my eyes. Getting ill would be bad enough but having to sell a kidney in order to pay for the treatment would add insult to injury.

And now I am back in Hanoi. My friend’s vacation has ended and she is on her way back to Ireland. It was certainly nice to have some company for a change and I am sad to see her go. It is always loneliest right after you say goodbye. Being in Hanoi does not help matters as I’ve had just about all I can take of this city. I am not sure where I will go next. I had planned on heading south in Vietnam but now I am not so sure. Let’s just say I am not feeling this country, or at least the northern region. I have seen some remarkable landscapes and natural beauty but so far I have felt more like a tourist than the other places I have visited on this trip. Maybe it’s just me (although I’ve heard similar thoughts from other travelers), or maybe it’s just a coincidence but the people I have encountered have not been so congenial.

In general the folks here have reacted in one of three ways: patent unfriendliness, cool indifference, or fawning obsequiousness. The latter usually occurs at a hotel and usually emanates from a desire to hook you on a tour. The street hawkers can be a bit intense. Yesterday, after discussing a possible ride on a motorcycle taxi and declining, the driver followed me down the street on his bike and at one point grabbed me by the wrist in an effort sway me his way.

Strangely, I was not convinced. I have not made a final judgment about Vietnam or it’s people. Just because it did not open itself up to me does not mean the possibility is not there. If only I new somebody that has lived here for a while or somehow managed to befriend a local with English skills I get the distinct feeling I would gain a whole new perspective.

Some of the fault lies with me to be sure. Normally, I spend more time learning the history, culture, and even sometimes a few words of the language. I have not done as much that on this trip, which is a shame really, especially when you consider the country’s rich history. I have made attempts to learn by questioning the locals but due to a language barrier I rarely walk away without being confused. I did buy a Vietnamese phrasebook but it might as well be Klingon. The only phrase I’ve managed to retain is ‘How much does it cost?’.