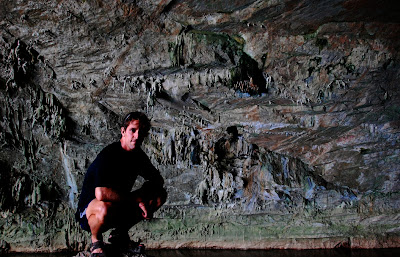 For a revised version of this post, go here.
Sept 30th, 2009 - I did something stupid. I managed to delete some of my best pictures from Northern Vietnam. They were awesome. Honestly, they were. I'm a dummy face. So the idea was simple enough: Drive from Meo Vac to Ba Be Lakes. We had a map. We had faith. What more did we need, right? Wrong. It helps if your map is accurate. As it turns out ours was not. Normally, I would assume that my predilection for disorientation was the root cause but in this case I had someone to verify my sanity (or validate my insanity).

We wasted a good two hours trying to reconcile a seemingly impossible set of circumstances. According to the map we could not possibly be in the town we were in. We made numerous attempts to gain insight from the local denizens with little success. We were either ignored, brushed off, or given even more baffling information. How many ways can you pronounce 'Ba Be'? Answer: 1,946. Does it help to possess a sheet of paper with the question “How do we get to Ba Be Lakes?” written in Vietnamese? No. No it does not.

We drove through the same town (Bao Lam) twice in an effort to find our true path. In the end Ba Be Lakes would have to wait until the following day. In the mean time we spent a total of eleven hours on a bike getting to our next destination, Cao Bang.

The mountainous serpentine character of the roads and their relative disrepair did nothing to expedite our arrival. Throw in goats, a sudden bum rush by a baby mud-soaked calf, large piles of stones, miscellaneous debris, acute knee-back-ass pain, and you have the makings of an arduous journey.


Luckily, we were treated to a fairly large city and a decent hotel, which was bit like discovering oil in your back yard. Score. A hot shower never felt so good. It was upon arrival at the hotel that I discovered that I had been bitten numerous times by an unknown insect. I bought a couple of shirts on the streets of Hanoi which I wore without first washing them. Swift. Cooties anyone?.

The next morning we made the usual attempt to find coffee and breakfast. We went to a café and had the familiar helping of road tar while receiving the customary congenial reception. We wanted to order food but for some reason cafes do not serve food. Why would they? That would be ridiculous. We went to a few hotels to see if we could wrangle some breakfast. None were serving breakfast. Why would they? That would be ridiculous.

In one place we sat down and were ignored for ten minutes before we gave up and left. Awesome. With empty stomachs and a bit of dejection we loaded up the bike and pushed on. I’ve concluded that the map was created by Satan's cartographer. While driving it escaped from a saddlebag side pocket and found a home in the road. As we felt naked without it I turned around to retrieve the bane of our existence.

I spotted it in the road but overshot the mark. I slowed down and began my u-turn but for reasons that allude me failed to look to my rear. At that a moment a woman on a motorbike screamed like an eight-year-old girl at a snake exhibit and grazed our bike, smashing my mirror and facilitating our fall. We lay in the road for a second or so before lifting the bike and moving to the shoulder.

No traffic and low speeds ensured that no one was injured. This was good because as it turned out the woman had a small child on the back of her bike (no helmet). Had I or she been moving faster it could have been much worse.

Shaken but not stirred we remounted and moved forward. The rest of the way to Ba Be Lakes was relatively uneventful….and well marked. We arrived in the early afternoon, found a hotel, and organized our trip on the lakes for the following day. Our efforts were not in vain.

The lakes and the connected river were beautiful and made for an exceedingly pleasant day on the water. The highlight was undoubtedly Puong Cave. Carved by a river and reached by boat it is the one of the most beautiful caves I have ever visited. Notwithstanding the sound of the occasional boat motor and the thousands of bats nestled in the crevasses above, it was filled with the serenity you would expect to find in such a place. Definitely worth a look.

While in the cave an older male Vietnamese tourist requested a photo with Shell and I. By ‘requested’ I mean grunted and pointed with an air of authority. No eye contact. No smile. Not even a thank you. He wanted a picture with the white giant and he was not going to be denied. I’d probably be put off if it was not so damn entertaining. 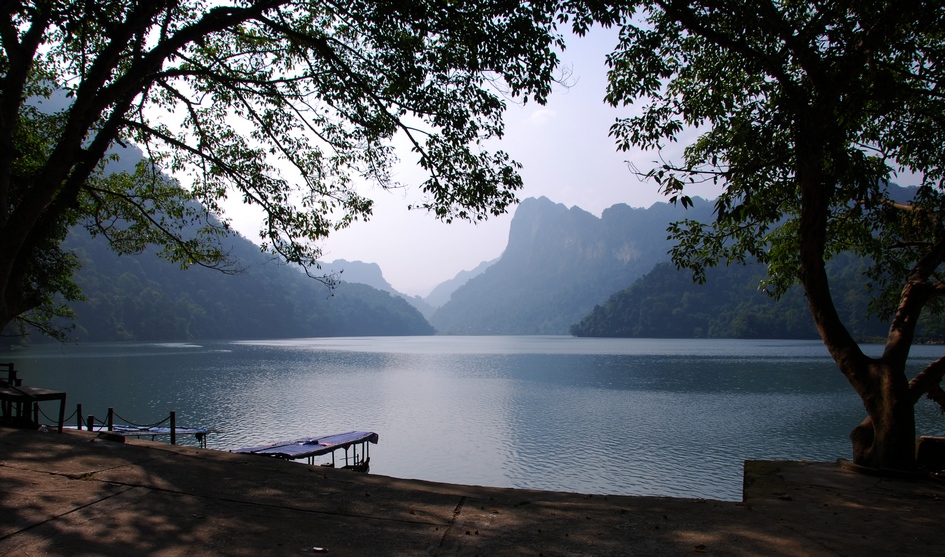 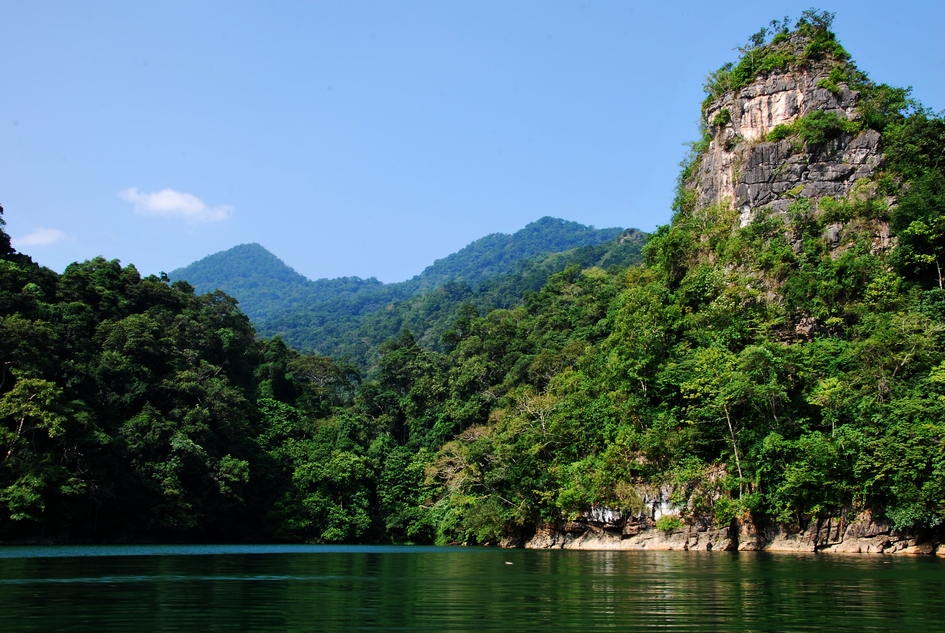 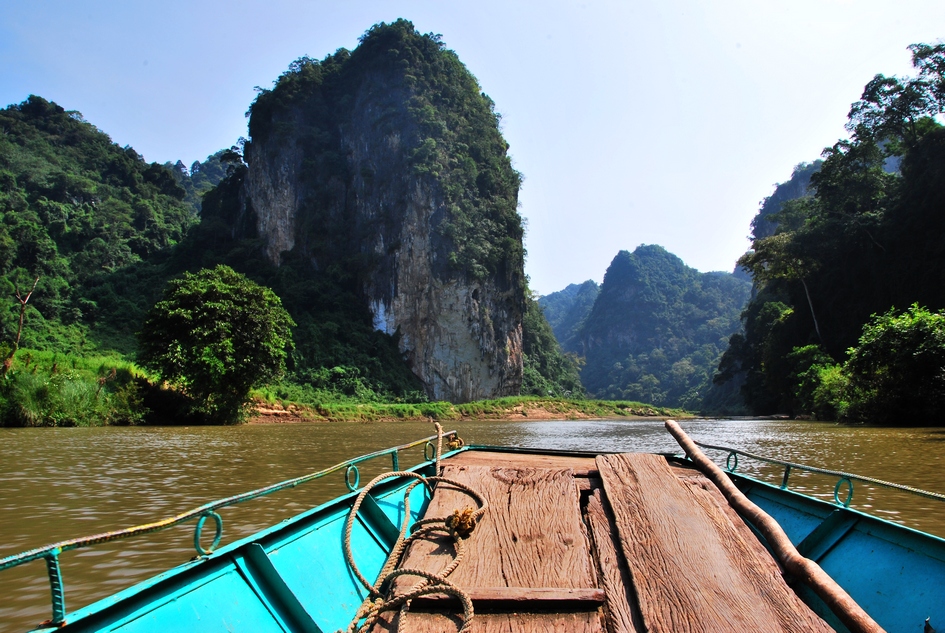 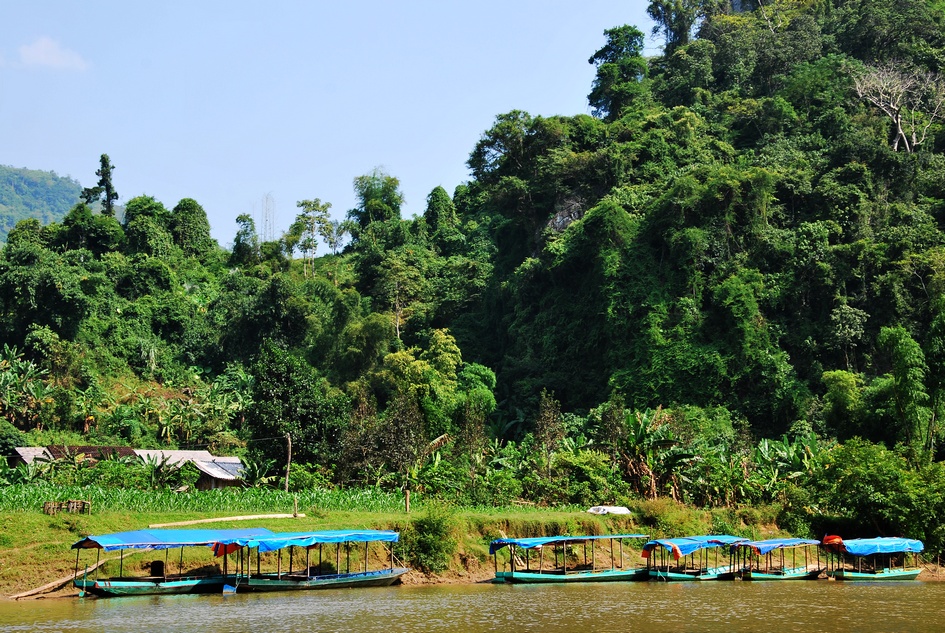 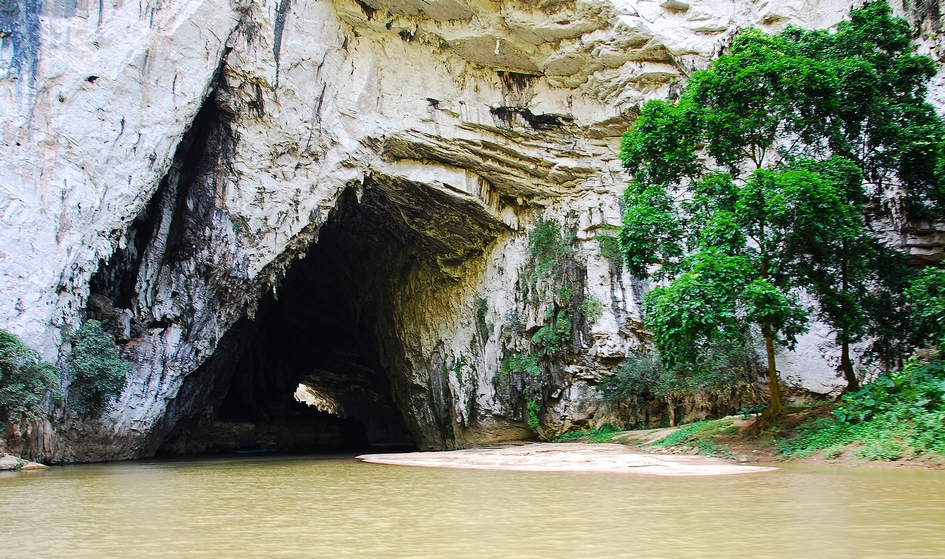 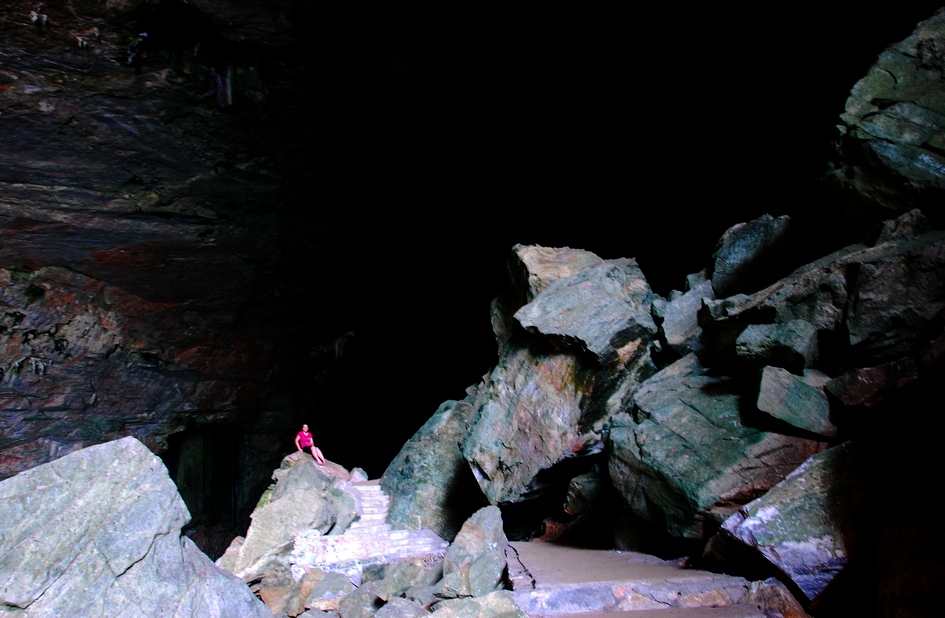 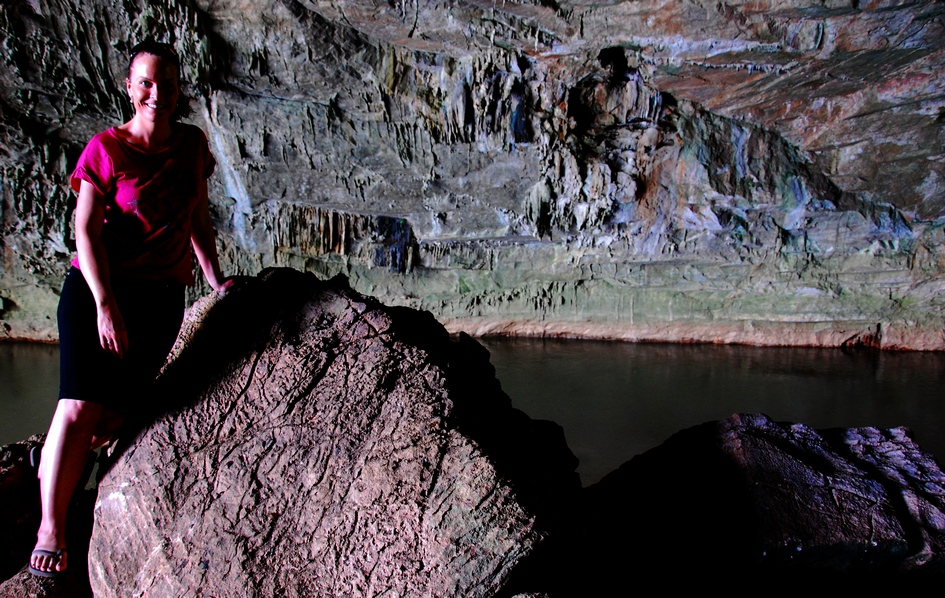 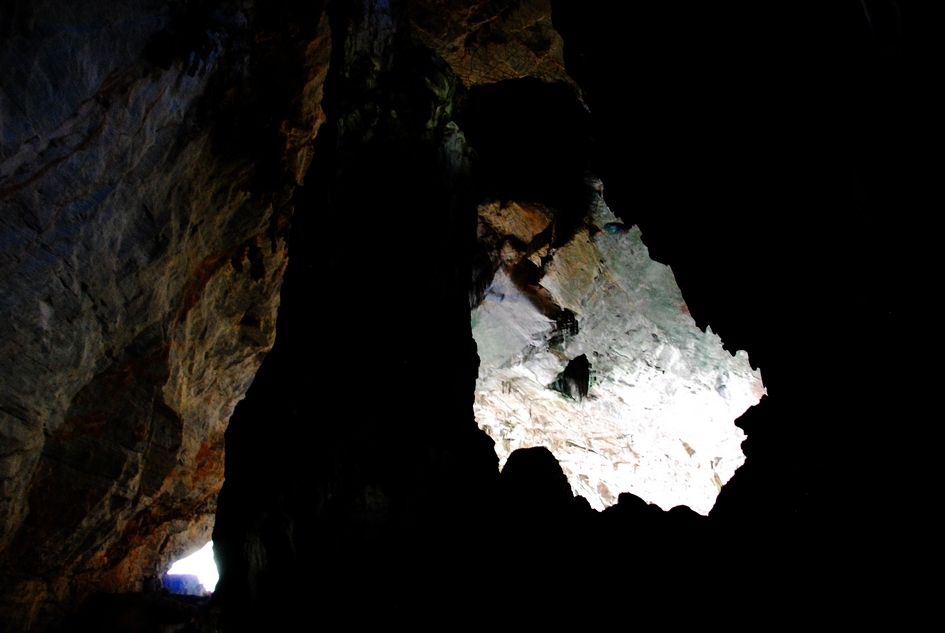 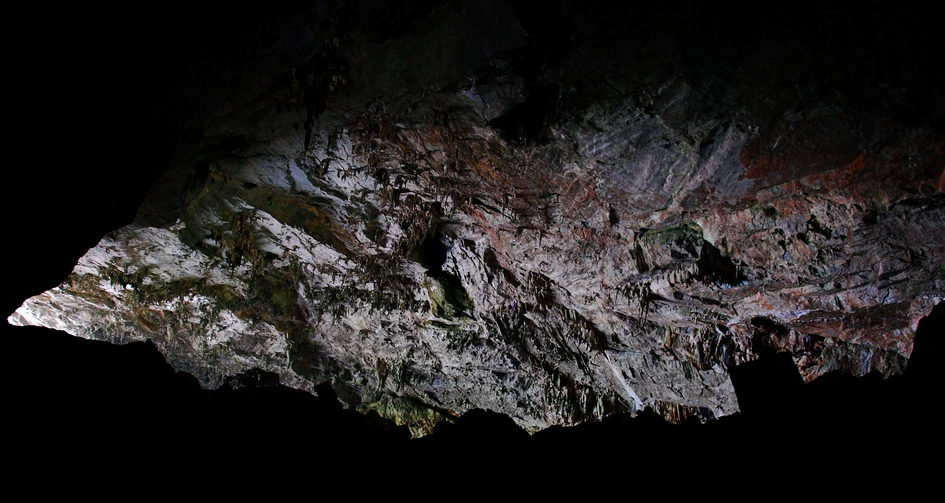 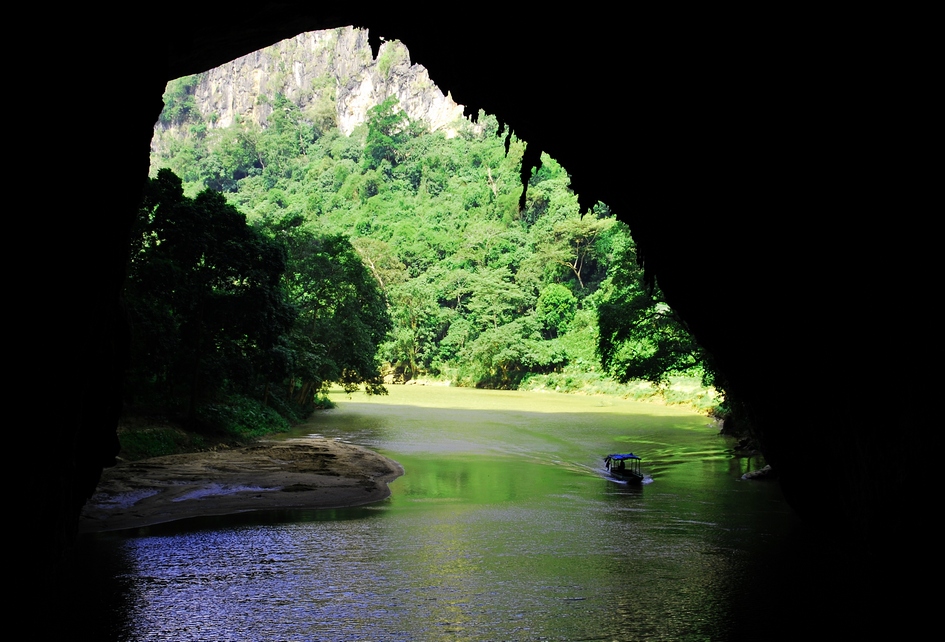 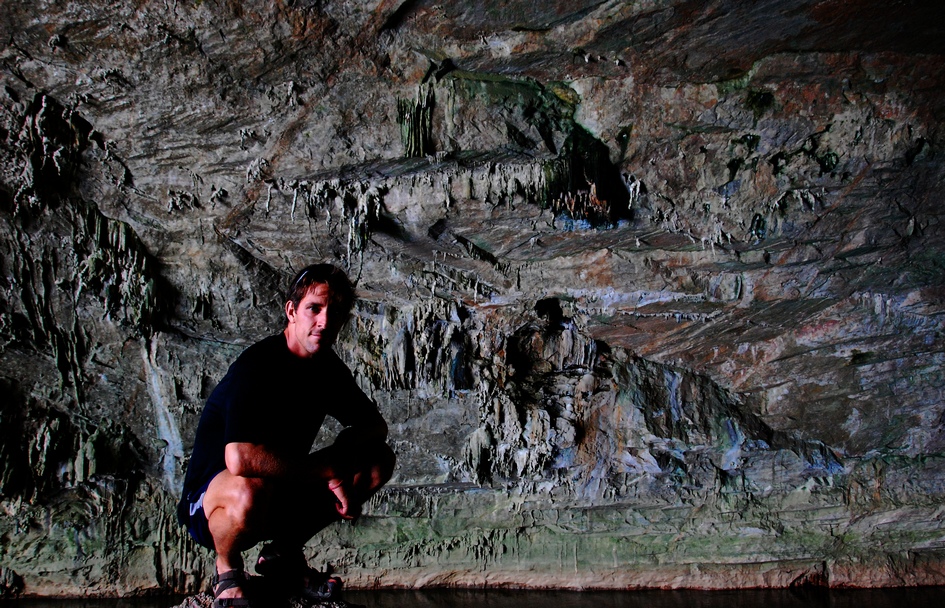 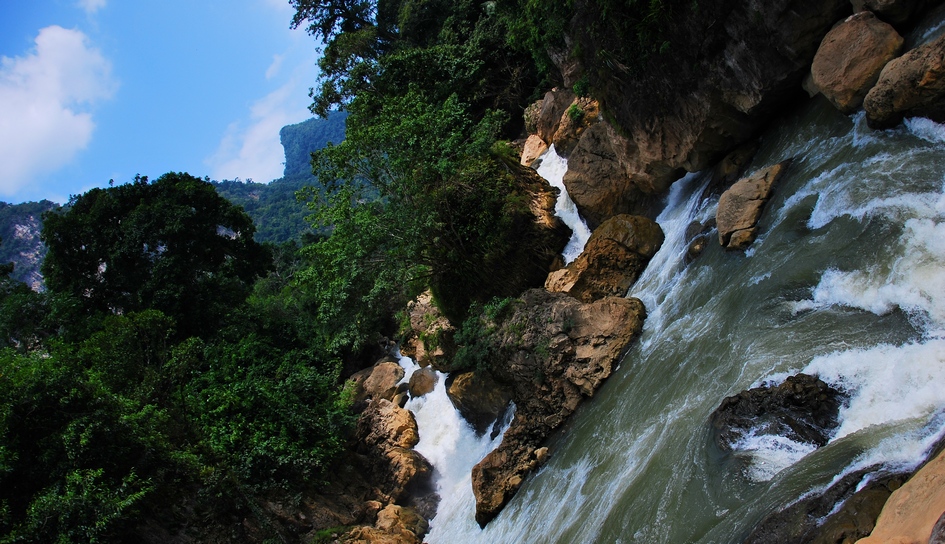 We finished our lake tour in the early afternoon, headed back to the hotel, packed up the bike, and moved on (much to the chagrin of our backsides). The next day and a half was spent making our way back to Hanoi with a hotel stop thrown in for good measure. Of all the time I have spent on a motorcycle in the past eight months this was, without a doubt, wrought with the highest concentration of insanity.

It made driving in Indonesia and Sri Lanka feel like a leisurely ride on a quiet Montana road after Armageddon. Just to ensure the challenging nature of the venue we decided to press on at night to shorten our last leg to Hanoi. There were cars, trucks, and buses overtaking with little regard for the welfare of anyone (I was run off the road repeatedly). People walking in the center of the road apparently unaware, unconcerned or both about becoming roadkill. I can understand wanting to cross the road but you could at least glance in either direction. Driving with a weak headlight while being constantly blinded by oncoming vehicle lights and a swarm of insects is also refreshing. Bicycles without reflectors. Motorbikes without any lights whatsoever. I passed vehicles that I cannot identify and motorbikes carrying livestock. I stopped repeatedly for large lorry trucks that backed onto the highway with little or no warning. I spent entirely too much time driving on the dirt shoulder of the road wary of pedestrians, animals, and food carts the whole time I was doing so. People talking and texting while driving motorbikes. I hate them. I want them to suffer. Have I mentioned the horns? This is the ‘annoying, mind-numbing, blood-curdling’ horn capital of the world. I especially enjoy when they creep up behind you and really let you have in an apparent attempt to facilitate a loss of bowel control in a fellow pedestrian. I hear them in my nightmares. I believe you can follow the sound all the way into the bowels of hell.

And then there was my triumphant return to Hanoi. Take all the shit I mentioned above and narrow the streets. Pure magic. Patience is a virtue. I was not feeling so virtuous. In fact, I wanted to start swinging. We arrived back at the hotel only to find that my reservation was somehow lost. Excellent. I returned the bike and was given a bit of trouble about the handlebars being crooked, a state of affairs that existed when I took possession and was not a result of our minor mishap. Luckily, all was smoothed out when I was given the green light by the mechanic. Super. I thought it was going to ugly. I had no energy for ugly.