What the hell is Orang Pendek? (Sumatra, Indonesia) 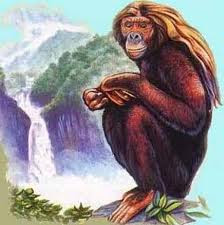 June 24th, 2009 – I've been strategizing, planning, and getting sick . . . . again. This time I think the culprit was fried chicken. Damn Colonel Sanders!!! I’ve been trying to make jungle plans and have met with the usual amount of frustration. At my last hotel I inquired into the possibility of doing some trekking. The gentleman behind the desk made a couple of calls and a guide met me at the hotel.

Well, Yan is a former guide as I soon discovered but an extremely nice guy. We soon became friends. He told me that although he no longer conducted guided tours he did have a friend who would help me out. This friend (Sahar) had some interesting experience. Apparently, he assisted some folks working under the aegis of National Geographic and their search for the mysterious orang pendek.

What the hell is orang pendek you ask? That would be Sumatra’s version of bigfoot, albeit a scaled down version (about 3ft tall – Littlefoot?). There have been rumors for many years of a small hairy humanoid creature roaming the junglein Kerinci National Park. Sahar helped set up and maintain motion activated cameras in certain areas of the jungle. The experiment proved fruitless. The little hairy bastard is an allusive bugger (Check out the Orang Pendek Project homepage). I was also told that Sahar assists a professional photographer that periodically visits the area. I found this most propitious and agreed to meet him in his village after leaving Sungai Penuh.

In the meantime Yan also brought me to a local chapter of Flora and Fauna International in Sungai Penuh. They have a particular focus on tigers in the park and engage in periodic surveys of Kerinci’s tiger population. So I was more than happy to meet Mr. Agung and discuss the prospect of tracking down one of the gigantic felines.

If I were to consult an 8-ball it would undoubtedly read: Outlook Not Good. However, he did suggest an area of the jungle to go look. It was at this point I was told that this was the ‘real jungle’ and not a place for ‘common people’ (i.e your everyday tourists). Exactly what I have been searching for. I want to be ‘in the shit’ as we used to say in ‘Nam.

I was also happy to discover that Sahar was familiar with ‘the shit’ and would be able to take me there. Super. So it was set. The next day I would pack up and head about 32 km north to meet Sahar. Of course that night I ate questionable chicken and was having pooper issues the next morning. I probably should have stayed an extra night at the hotel (they had HBO) but I decided to press on. For my trouble I was rewarded with a healthy downpour on the way to Kesik Tua (my destination). 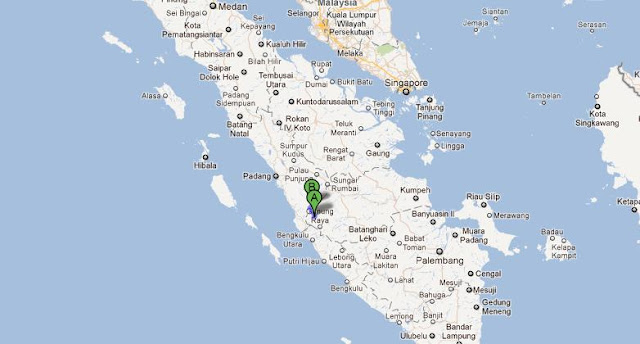 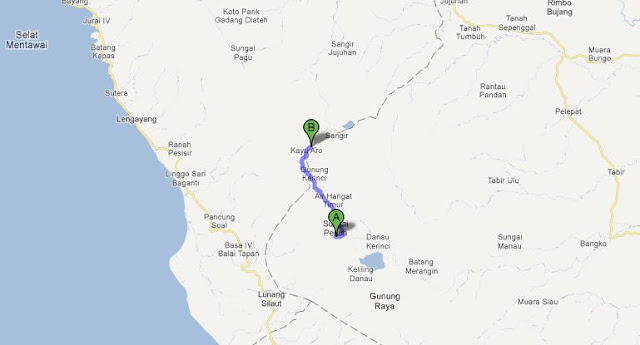 I did finally arrive and gave Sahar a call. He did not venture to my hostel until after dark on account of all the rain. Not such an auspicious beginning. When he did arrive I sat down with him and the owner of the hostel (Pak), also a knowledgeable bloke. They then began pissing all over my proverbial parade.

I had plans to climb to Danau Gunung Tuju (Seven Mountains Lake) which I should be doing on the morow. Originally, I was told by Yan that it would be a good idea to make it a two day trip and camp one night near the lake. He said it was pleasant and that there might be tigers in the area. When I brought this up I was given the ‘what has Yan been smoking?' look. They made it sound as if I had a better chance of going to the prom with orang pendek than I did of seeing a tiger in that area. And on the idea of spending a night near lake in order to do a bit more trekking Sahar was less than enthusiastic and behaved as if doing that would be ridiculous. He told me the trail that leads around the lake is in poor condition. So I relented and agreed upon the normal one day excursion that most others do. Super. I’ve experienced this phenomenon before and could have pressed the issue but decided being stuck in the jungle with a disgruntled guide would be undesirable.

There is also a volcano (Gunung Kerinci) to climb that lies just outside the town of Kersik Tua. I researched the prospect of doing this back in Sungai Penuh but was beaten down like a panda in a Chinese zoo. At the national park office I was informed that the mountain was closed due to the danger of eruptions. Yan also informed me that the mountain was closed. A man at the hostel in Kersik Tua reiterated the assertion. And then I met the three Malaysian gentlemen that were in fact climbing Kerinci the next morning. Remember my reference to the Rule of Ignance? Never believe anything you hear ever. Find out for yourself. So this may be on the schedule after I climb to the lake. That is, if it does not bury Kersik Tua in magma.

I asked Sahar about the idea of guiding me up Kerinci. More unbridled enthusiasm. After five minutes of poking and prodding he finally admitted that he would not be able to do so on account of a recent soccer injury. He can set me up with a guide so perhaps I will be able to dodge pyhrroclastic flows after all. I am hoping his recommendation is a little more ambitious about the trip as it is a two day affair. I am less than optimistic.
Posted by Rich at 10:29 AM