I woke up this morning and hit the road. Destination: Liwa. The trip was only supposed to be 32 km but I missed the turn off and drove about 20 minutes out of my way. Magellan would be disappointed. Parts of the road were dinged up but it was a nice ride none the less. There is a rise in elevation and the air is a bit cooler. Add some meandering s-curves and you have a motorcyclist’s delight. I cranked it up to about 45 mph. ’Almost blew my face off.

Liwa is not along my intended route but I want to see Bukit Barisan Selatan National Park. It is ranked by the World Wildlife Fund as one of the planet’s most biologically outstanding habitats. I’d have to be an asshole to drive past. So to Liwa I went. The Lonely Planet has scant information on the park. It recommends that you enter the park near a different town further south (Kota Agung to be exact) but I was told I could enter at Liwa. Problem is the guidebook has nothing on this town so I had to go in blind. How crazy am I? I went to a town not outlined in the guidebook (What next? A holiday in Cancun?). Soon I’ll be living in the bush with nothing but a loin cloth and a hankering for bush meat. 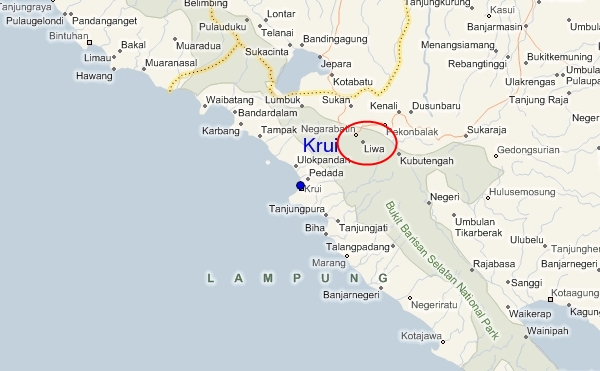 I drove to the town in hopes of finding someone to take me into the park. It did not start well. I stopped at a hotel/restaurant to inquire about the prospect of going into the park. No way, Jose. The owner said it was not possible and that I had to go back to Kota Agung. I asked the same question to many folks many times and received the same answer. I sulked over a bowl of rice and some fried chicken. Just to be sure I asked again. Same answer. Fooey.

I hopped on my hog and began the trip back towards Krui in a state of dejection. As I was driving out of town I started to chide myself for not making more inquiries just to be sure. While engaging in this bout of self-flagellation I passed an entrance to the park in question with a ranger station across the road. I had already passed this on the way in to town. I ignant. I very ignant. So I drove up the little hill to the station and had a nice chat with some of the rangers. By rangers I mean Indonesian males dressed in jeans, t-shirts, and flip-flops and by chat I mean an exchange of grunting sounds in broken Indonesian and English. Tomorrow I head into the park for a four hour trek. I am hoping to wrestle a tiger and get speared by a rhino but I’ll probably just end up with a pocket full of leeches. I hear they are plentiful.

So the guy at the restaurant failed to realize that there is an entrance to the national park not fifteen minutes from his front door? Sounds about right. Had my enhanced powers of perception not been triggered the second time I passed right in front of the park entrance I would have missed my opportunity. I violated my own travel rule which is to never believe anything anybody says ever. In other words, people are often mistaken. Seek confirmation. Don’t be ignant. I shudder to think how many opportunities I missed in the past because I failed to observe this simple rule, henceforth referred to as The Rule of Ignance. The rule came into play later that day when I was seeking the Internet. Nobody I asked gave me the right answer. They did provide an excellent itinerary for driving in circles. I managed to find a place but the power went out not long after I arrived.

On the way back to the hotel I stopped at a restaurant to have a bite. Clearly, they see few bule. At first the reception was cold. I had the feeling they (by ‘they’ I mean the entire extended family) wanted me to get it to go. I resisted and asked for a plate. I had chicken, fish, and something I was at a loss to identify. It was either stomach or bunghole. The man of the house came out and appeared to be trying to kill me with his mind. The family watched me eat. It was awkward.

But the ice melted and they warmed to me. Who wouldn’t? The man pointed to the five or so women sitting around table and seemed to imply that perhaps I should choose one for my own. This is not an uncommon occurrence. I was told I was handsome. Keep in mind I have not showered in days and could use my hair to lubricate my motorcycle chain. One of the woman said, “I want to kiss you” in English. I blushed like a school girl. When I left half the family came outside to see me off. Again, you have to love Indonesia.