I recovered from my sinus irregularity and finally moved on. It was not easy. Three nights at the Sheraton spoiled me a bit. Tearing myself away from a comfortable bed and all the hot water I could handle took more than a little bit of gumption. At this point I was feeling better suited to a holiday in St. Lucia than a Sumatran adventure. I drove west from Bandar Lampung to Krui, a village by the sea. It is a hangout for surfers on account of the righteous waves dude! I thought I might stop for a day or two and have a look-see. As it turns out there is not much to do for a land lubber like myself. Some beautiful beaches but little else.

I can pinpoint the exact moment I felt like I was actually in Sumatra. I was driving along a nicely paved road that just ended abruptly in a tangle of rocks and dirt. The pavement did pick up again but that was my psychological entrance to this part of Indonesia. From that point it felt a little like I took a step back in time, like I might be visiting other parts of Indonesia ten or more years ago. It is tough to describe in words. Up until then I was thinking that maybe Sumatra will not be all that demanding, no big deal. It still could be a relative breeze but my instincts tell me otherwise. 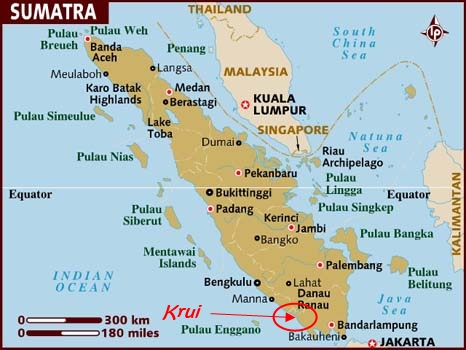 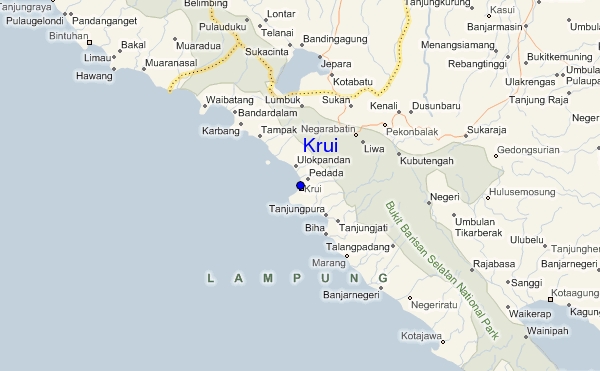 When I crossed that psychological boundary the world around me took on a slightly diminished shade of rosy. The faces became a bit less welcoming, the smiles from locals less enthusiastic. The smilers are still there but it seems there are fewer of them. I’ve seen more and more looks of ‘What the f*** are you doing here?!’ A few, especially some of the males, look like they are on the verge of snarling. And when people say ‘hello’ sometimes it feels like a warning. Don’t misunderstand me. I make no claim as to their actual state of mind. These are only impressions and could be (and hopefully are) wholly inaccurate.

It can be a bit intimidating. None of this is helped by the presence of my motorcycle. As before I am not sure the response would be much different if I started cruising through villages on a hovercraft. Reactions vary from child-like wonder to borderline contempt. I guess they just don’t see many motorcycles of the Honda Phantom ilk in these parts. And they sure as hell don’t see mutant American goofballs traveling solo on them. I’m an enigma.

My current lodging is of note. I arrived yesterday to discover that the place I wanted to stay was full (damn surfers). So I settled for the place next door. Not too bad but definitely not the Sheraton. It is right next to the water but this of little consequence since it is not an ideal place to swim. Surfing, yes.

Ever been to deer camp? If you’ve never had the pleasure then imagine a run down ski lodge by the beach. There are a few actual rooms but there are also beds place around the common area and on the floor. I suppose when it is busy there are surfers strewn about willy-nilly.

As it happens I am the only current tenant. The owner (at least I think he’s the owner) is a rather quizzical gentleman. I am warming up to him but at first he was annoying the living bejesus out of me. When I arrived it was a woman who showed me the layout. As I was moving my stuff in he arrived and seemed to be rather heated about something. My Spidey sense told me I was the source of his discontent but I cannot be sure. When his eyes met mine he put up the facade of a smile but went right back to grumpy pants immediately afterward. No clue.

We then had an ‘adventures in language barrier’ discussion about my passport information. Normally, every hotel requires guests to fill out a paper that includes name, nationality, address, passport number, port of entry, etc. I did that but Grumpy also wanted a copy of my passport and visa so he could drive 32 km to a police station and pass the copies to them. Riiiight. Perhaps that explains his dissatisfaction with having only one guest. That was a first in the five months I have been in Indonesia. I believe that it is the government's way of keeping tabs on folks in case something happens but who really knows? There’s probably a road block waiting for me in Liwa (the next town). He did say that every hotel must do this.

I asked grumpy (half joking) if they do this because it is dangerous around here. He reacted with, “Ha, ha, ha…..maybe.” Great. His laugh reminds me a little of a lunatic sitting in a corner at the asylum. Sometimes he starts cackling for no reason in particular. He will say something in Indonesia and then begin chortling. At first it was a little unnerving. Now I just giggle along.

I went for a ride yesterday and when I returned he looked at me and said, “America many money”. That might have been his way of implying that I’m a rich asshole. He’s sitting a few feet behind me right now watching me type this on my computer. I’m sure this only confirms it. I heard one of his friends tell one of the women who works here that he thought the bike cost 200 million rupiahs (somewhere in the neighborhood of $20,000 US). I set him straight on that one and informed him, as I often do now, that the bike is not mine and that I am merely borrowing it from my friend who lives in Bali blah blah f***king blah. No one's buying it.

On the way to Krui I stopped by the side of the road to purchase gas (not many stations around so people sell it at their shops by the road). I was invited to sit and drink some coffee. I did so and found myself being scrutinized by four young males. Not my first such experience. I’m getting used to it. For some reason they had a monkey tied to a tree. Dunno.

Imagine you are just sitting there with your friends smoking and drinking coffee when out of the blue a bule (Indonesian word for white person) pulls up on a million dollar motorcycle, fills up on gas, sputters a few broken words of Indonesia in between sips of his coffee, and then hits the road. Part of me wonders if they were plotting my assassination while I was sitting there. Of course I jest but these types of thoughts do tend to make their way to the periphery of my consciousness at moments like that. Fun. I should mention that no attempt was made to get extra money from me either by jacking up the price of gas or in the form of begging. That is remarkable considering their financial situation and a testament to their character.

I have been a bit lazy with the camera and my desire to write has waned a smidge. I’m in a bit of a lull. Today I did have one of those ‘what the hell are you doing’ moments. Soooo you’re going to drive the entire length of Sumatra (fourth largest island in the world) on a motorcycle by yourself with little to no mechanical knowledge, a rudimentary grasp of Indonesian, and a sincere hope that you can find a boat back to Jakarta in an effort to avoid having to do the whole thing over again. Sure, why not?

There is a national park nearby with tigers and rhinos and shit. I am hoping to make my way inside but I think tourist infrastructure may be lacking. Chances are next to nil but I would really like to see a tiger in the wild. Really, really I would. And a rhino.

I mentioned the word ‘bule’ above. My dictionary says it is a derogatory term for 'honkey', I mean 'white person'. I am not convinced it is pejorative because if it is there is a whole lot of prejudice flying around. I hear it every time I walk around town. So I guess if all the voices were instantly translated as I walked down the street I would hear, “Hey look! A white guy” or “Hey white guy, nice bike” or “White guy, buy my little girl some ice cream” or “Look! A freakishly tall white guy”.