My guide up Mt. Kerinci turned out to be a heck of a fella and a superb guide. His name: E.En (his spelling). We met at his home to plan my assault on yet another Indonesian volcano. Supposedly, Kerinci is a bit ornery at the moment. According to everyone except the folks in Kersik Tua the volcano is closed for climbing. This includes the personnel in the national park office in Sungai Penuh. What the f*** do they know?

From the moment we met I had an extremely good vibe about En notwithstanding his uncanny resemblance, in both appearance and mannerisms to Guillermo Ugarte, the shifty character in the beginning of the movie Casablanca (the man that gave Rick the letters of transit and then was shot by police).

The next morning we were shuttled to the start of the trail via motorbike. At the foot of path you will find the customary offering station where folks make a small contribution to the volcano as a token of appeasement.

The mountain sprouts from the jungle and the trail leading to the volcano makes for a pleasant stroll. Along the way En pointed out gibbons, monkeys, birds, squirrels, and interesting plant species. At one point he pulled out his cell phone and played a recording of a bird (I forget the name). Within a couple of minutes two of the birds were within a few feet of us. I am not much of a birder but that was pretty cool. That is the best use of a cell phone I have ever witnessed. 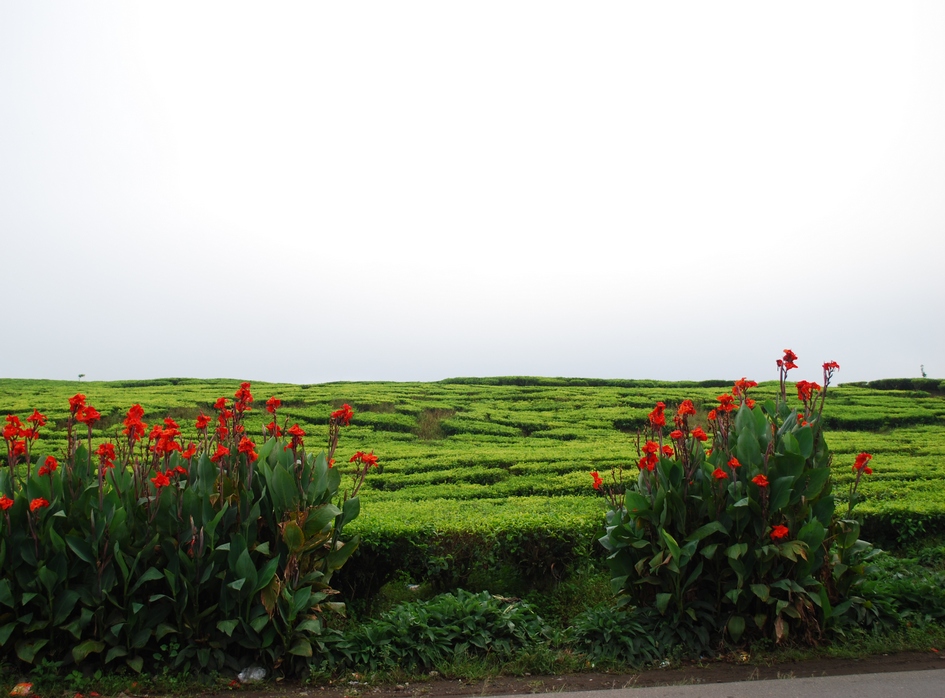 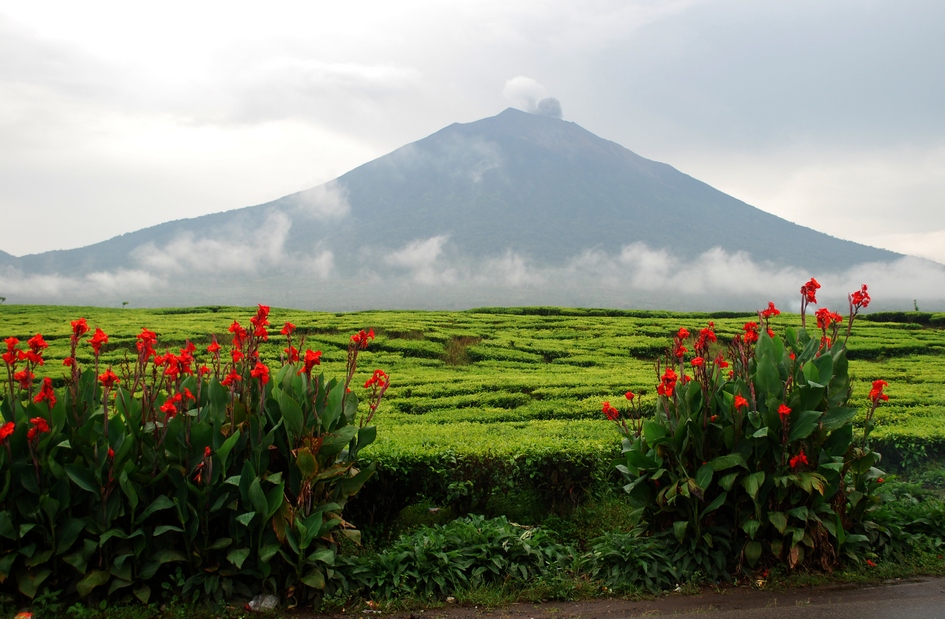 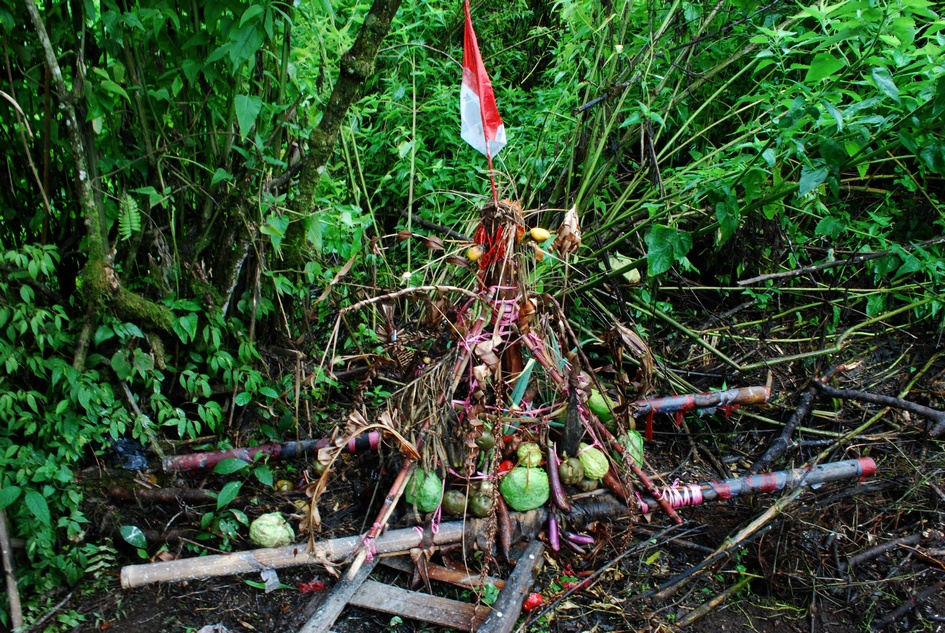 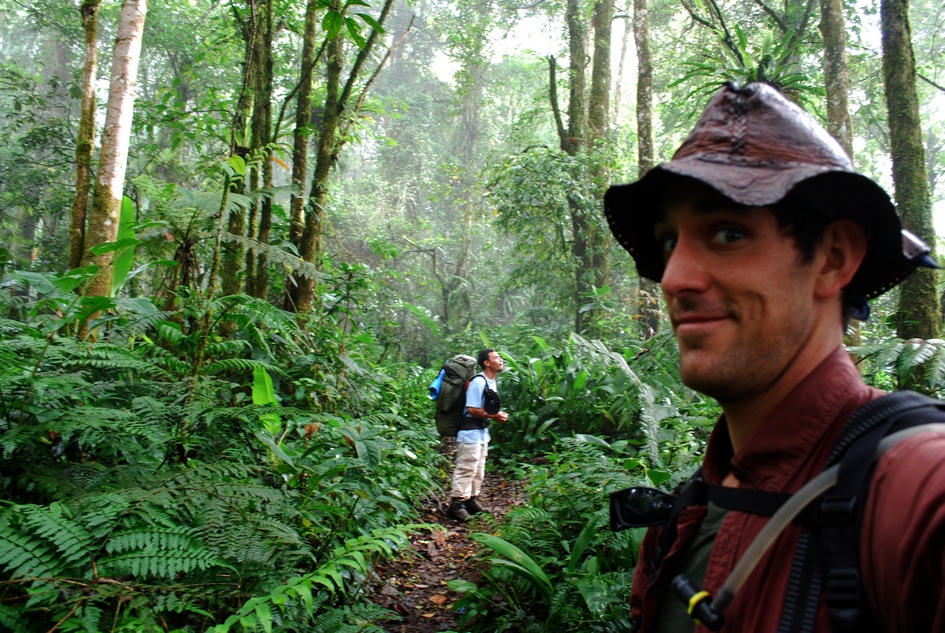 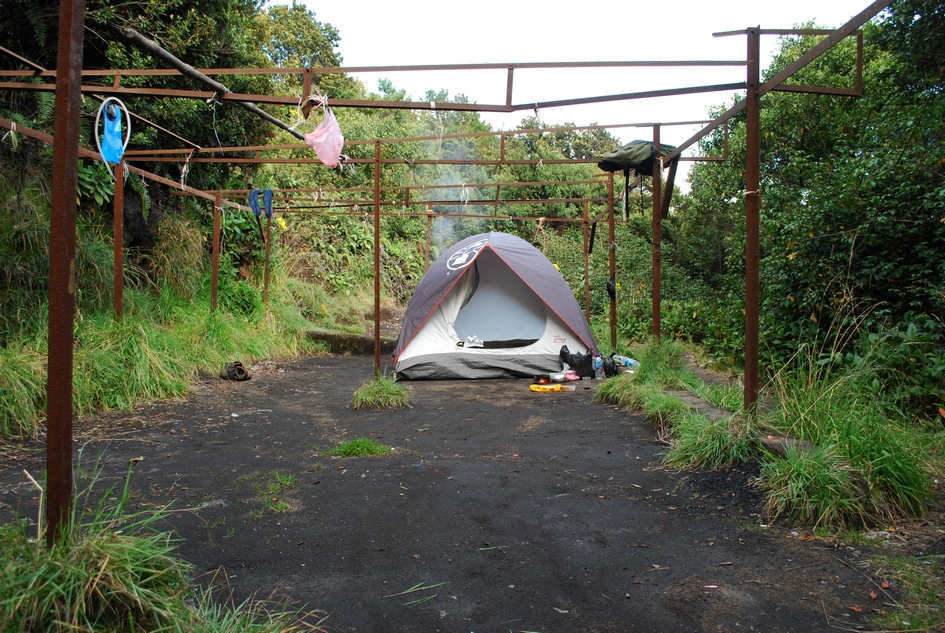 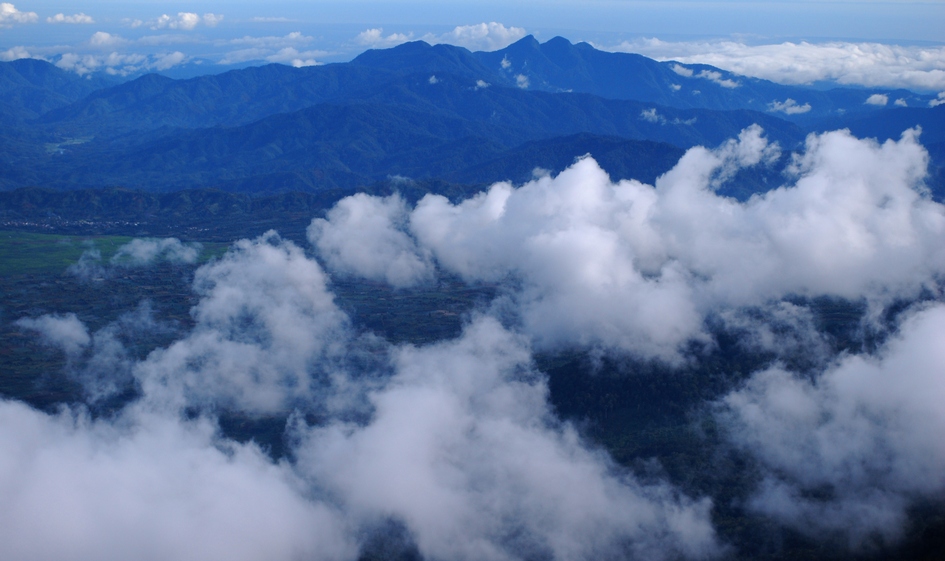 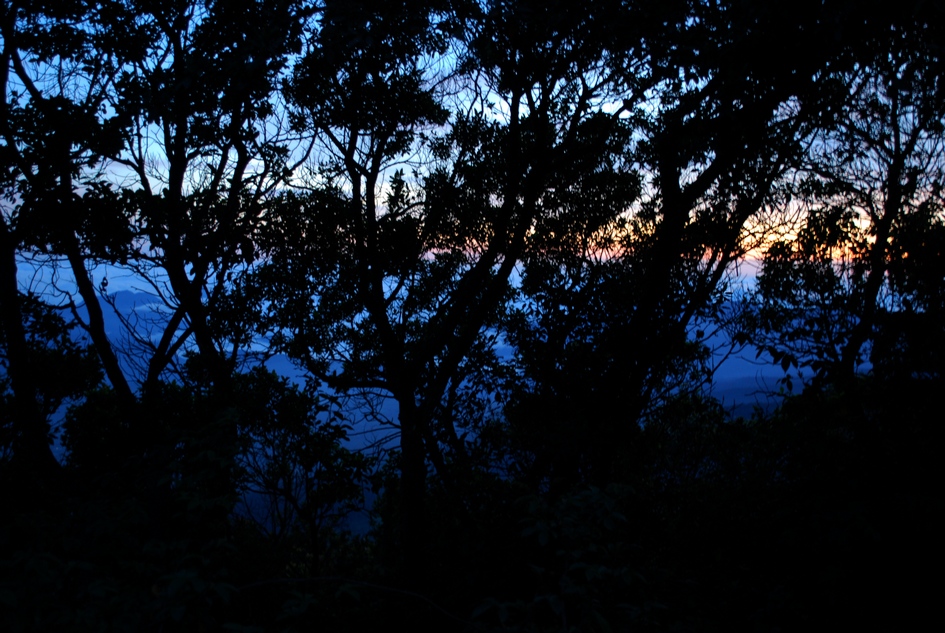 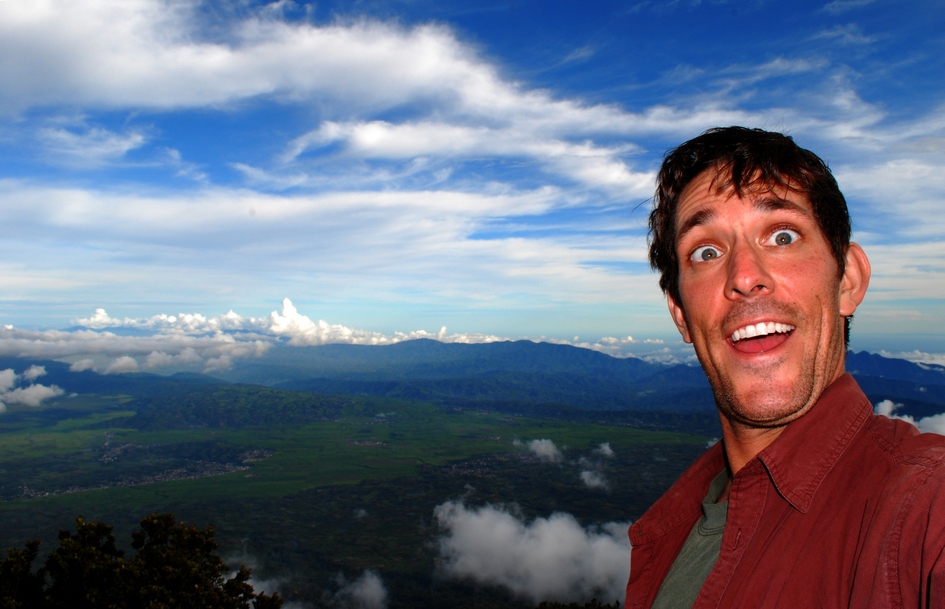 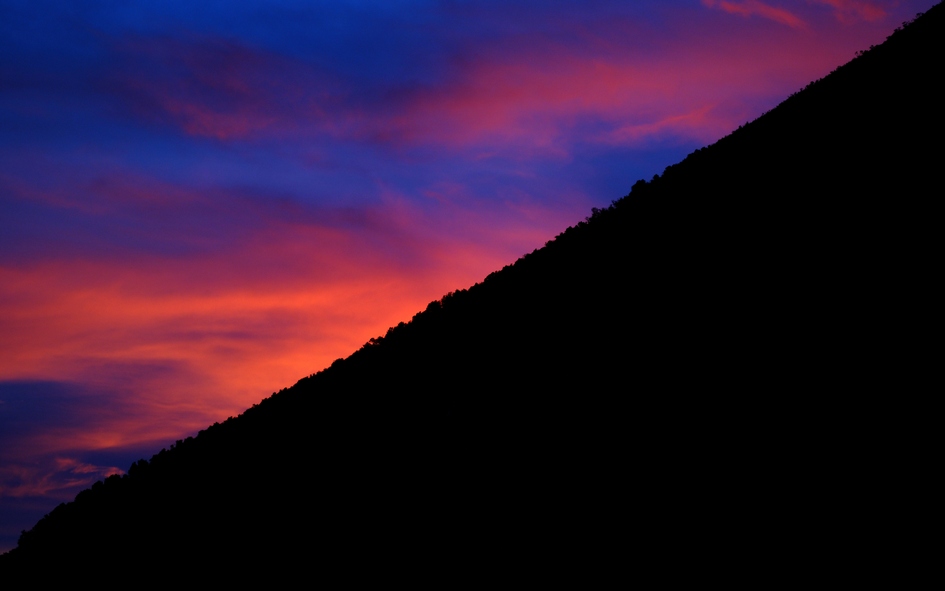 Before dinner En inquired, “Ummm..sorry, Richard, do you want to play with fire?” Screw Smokey the Bear, of course I want to burn shit! Actually, he was merely asking if it would be permissible to start a small fire (he asked before doing anything) but his choice of words (and his Ugarte voice) made stifling a laugh hopeless. 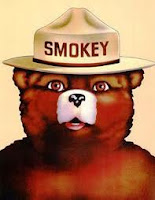 We went to sleep early in order to rise at 2:15 am and begin the climb to the summit at 3 am. Our camp was just below the tree line where vegetation falls away and is replaced by exposed rocks and scree. The goal is to arrive on top before sunrise in hopes of catching a geologic light show of spewing magma. I’d seen photos of the summit two weeks previous and was hoping for a similar spectacle.

The constant rumbling of the mountain let us know it was disgruntled. I won’t say angry, just slightly irritated. I would not want to be standing on the rim for angry. How do I describe the persistent grumblings? Imagine the sound of a torrential rain, a strong wind, and a landslide all rolled into one. Standing on the edge of a gigantic caldera listening to volcanic lamentations in the dark is an experience not to be missed. Just the right combination of fear and exhilaration. Want to feel alive? Try it.

As it turns out I was not treated to such a fantastic light show but it was still an awesome sight to behold. From the summit you can see a good thousand feet inside the crater, at least when Kerinci was not bellowing smoke. Unfortunately, between the smoke and the rolling cloud cover it was impossible to see much of anything most of the time. However, what we did see was well worth our efforts.

Smoke, ash, and small fiery embers were propelled into the air as we stood peering into the abyss. And, as I stood on the edge of this grumbling giant, I could not help thinking about the possibility of a sudden a violent explosion. Niiiiice Kerinci. Thaaaaat's a good volcano. You won't hurt Richie. 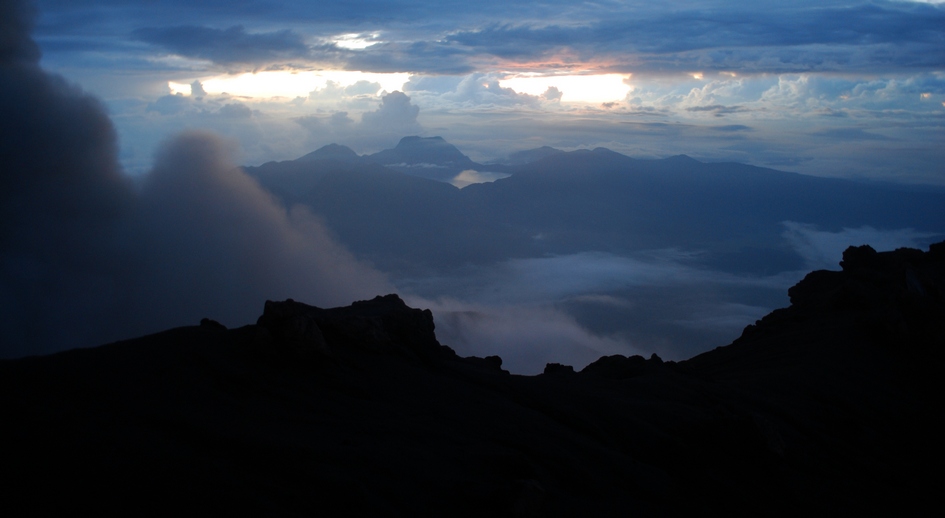 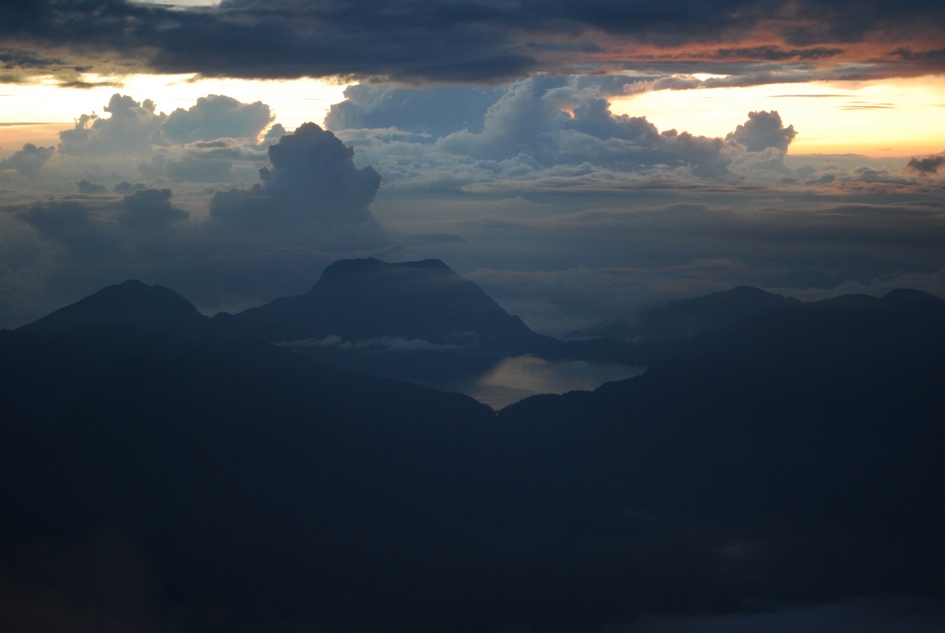 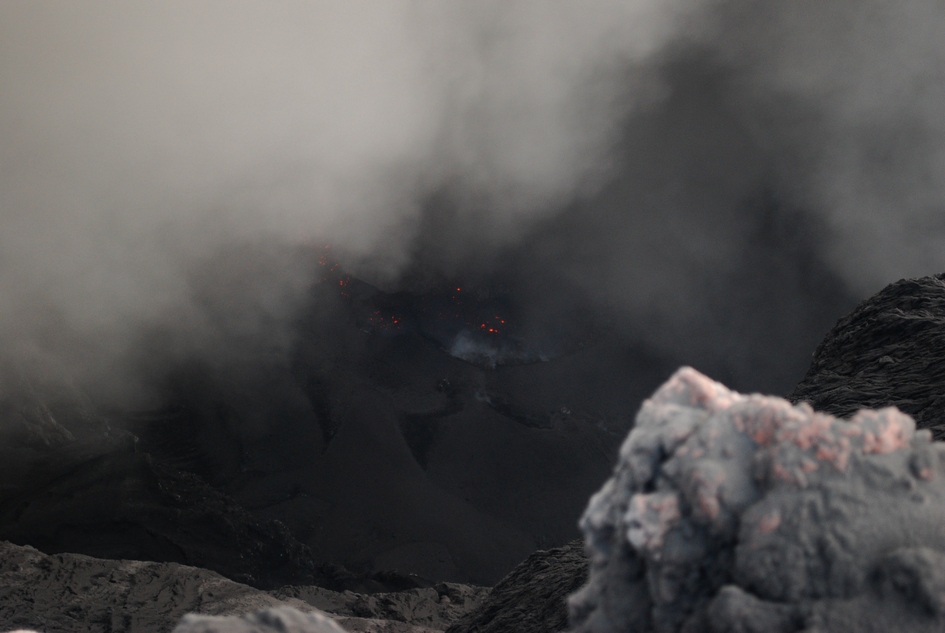 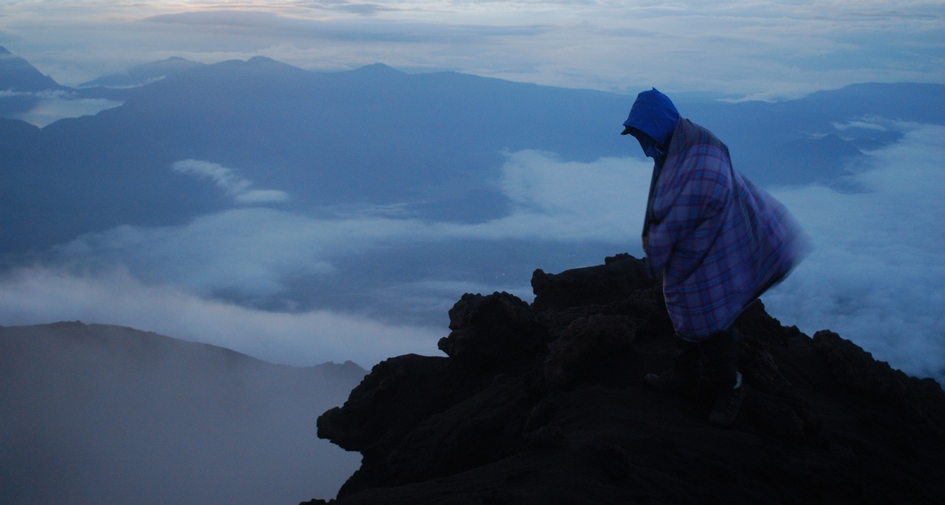 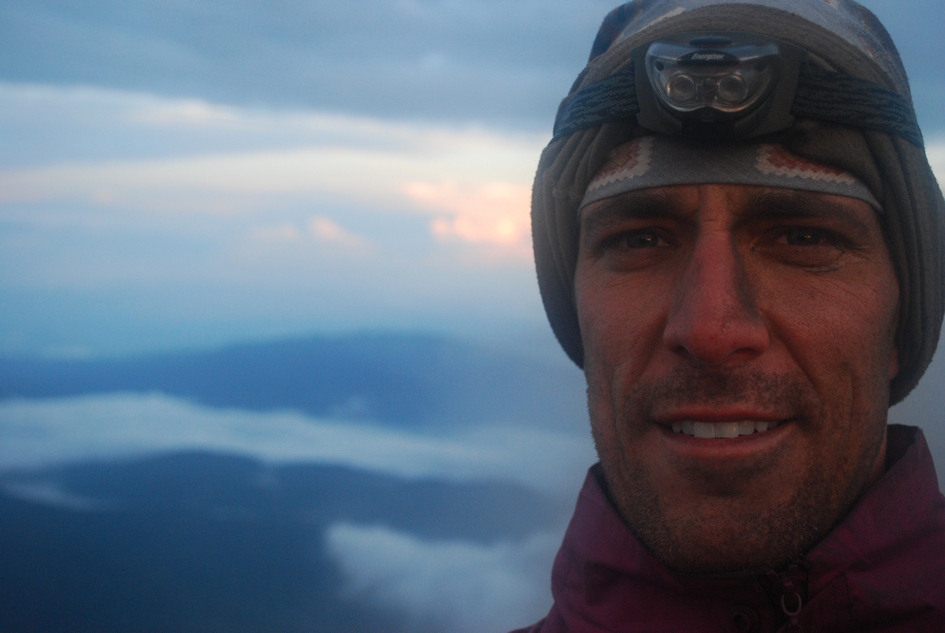 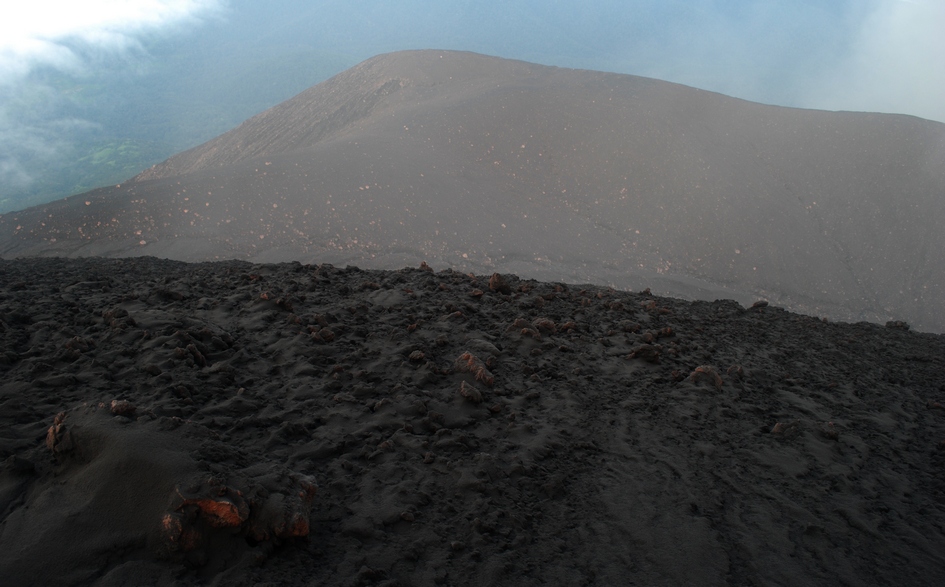 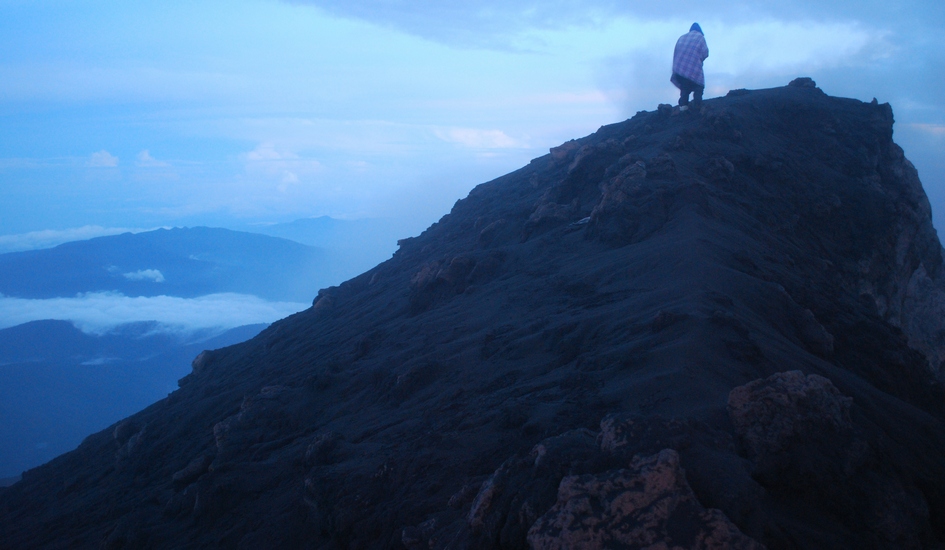 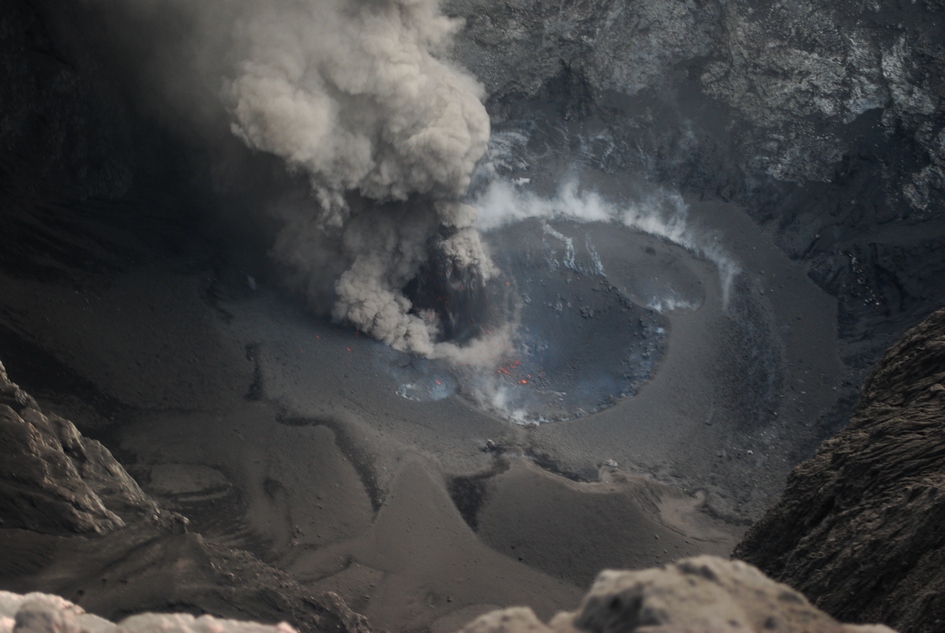 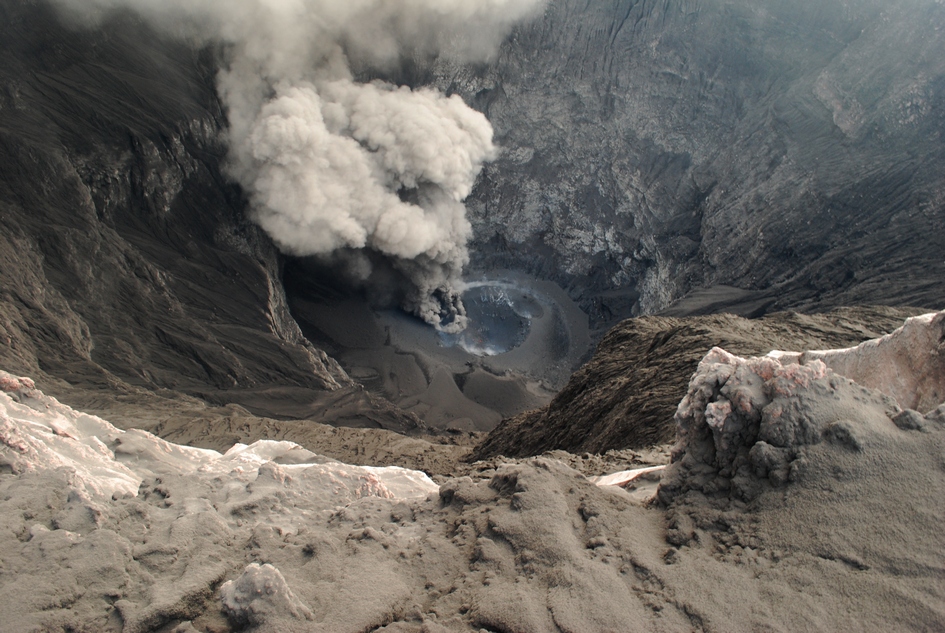 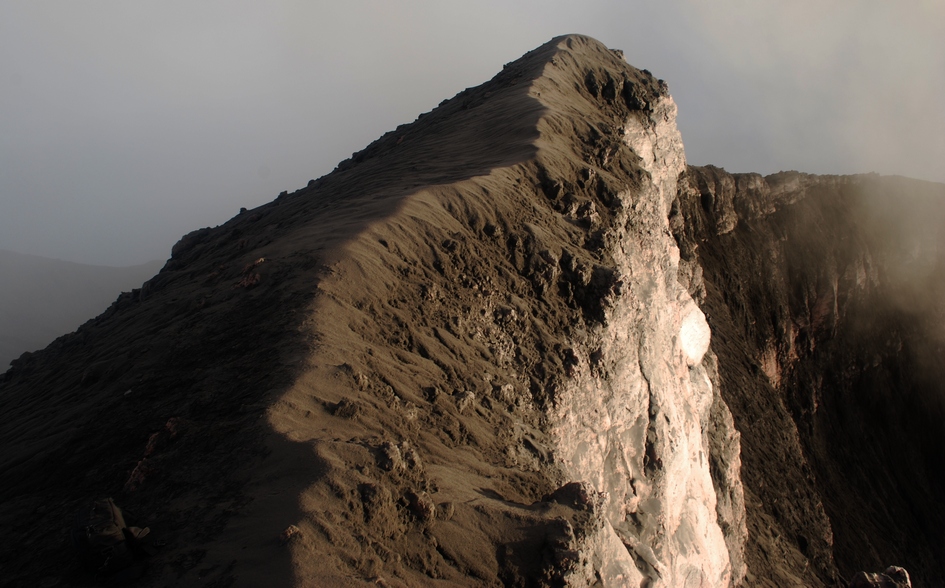 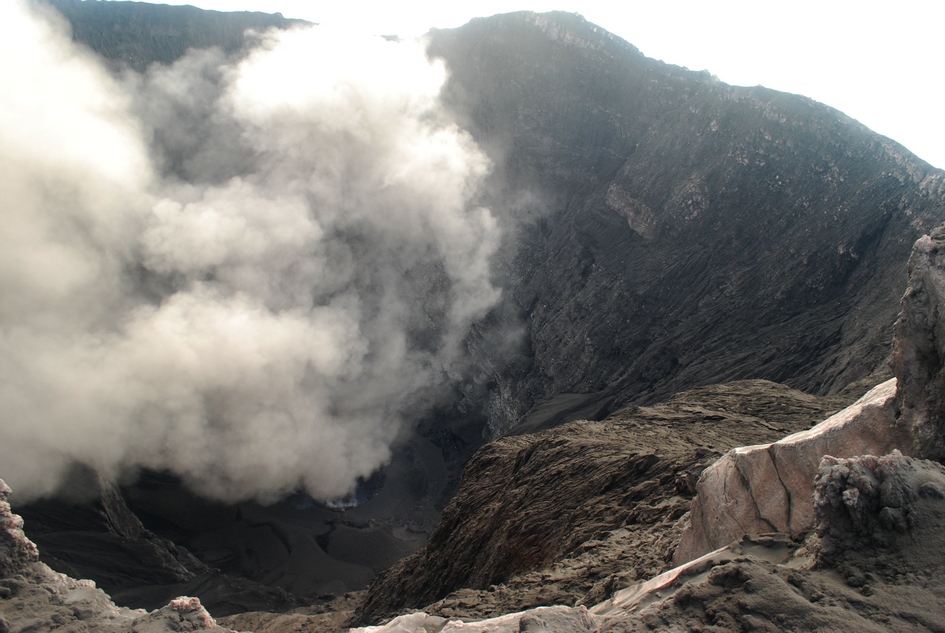 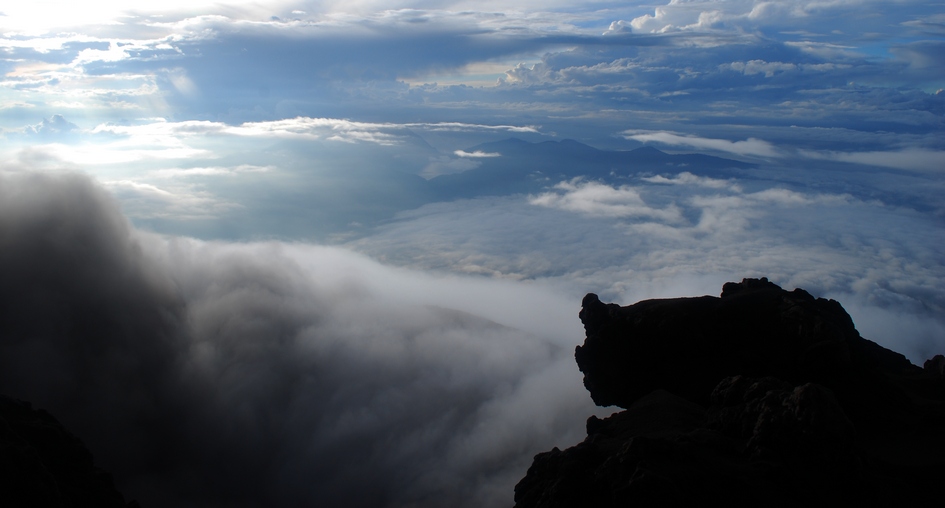 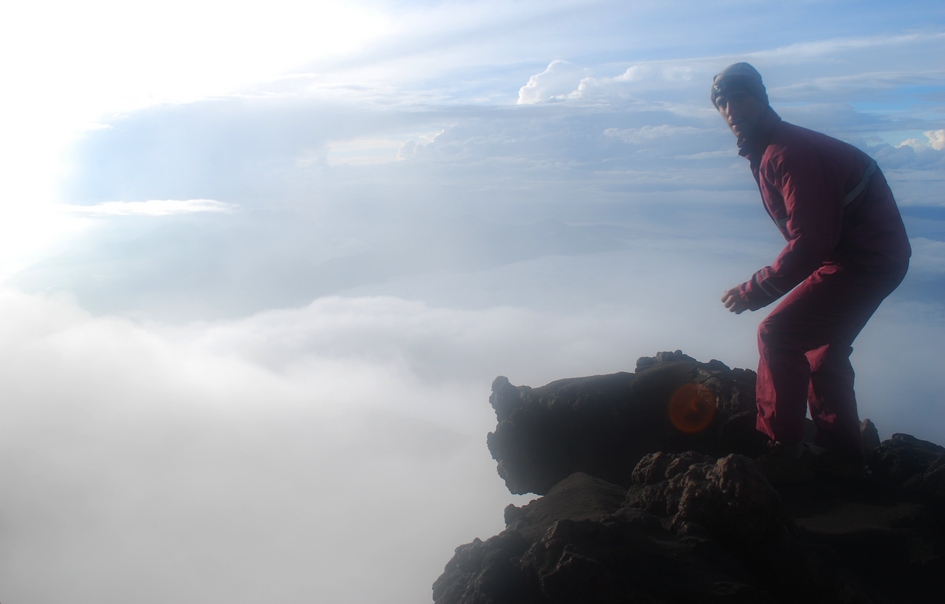 One of En's most endearing qualities is his enthusiasm. He was just as excited as I to be standing on the edge of a geological masterpiece. Like me he was childish in his exclamations. He made me feel as though it was his first time as well. That is not an easy trait to find in a guide either here or any other place else for that matter. I felt so incredibly fortunate to share that moment with a kindred spirit (En, not the volcano).


By the time we started down conditions on the mountain had deteriorated considerably. The wind picked up and the volume of ash floating in the air had increased significantly. I had all I could do to snap a few last photos of the panorama before we began our descent. My face, clothes, and, unfortunately, my camera were covered in ash. Breathing was not so much fun either.

On the way down I turned into somewhat of a nosebleed. I lost my footing not far from the peak and dug up my palms in jagged rock while attempting to brace myself from a fall. In order to prevent further injury I donned my gloves. Well, I donned a glove as it appears I donated my right one to the spirit of Kerinci. Before long my remaining glove was soaked in blood.

After we reentered the forest it started to rain. I’m not talking a light drizzle either. It is the jungle, which makes it all the more perplexing that I threw on my poncho in lieu of my full rain gear. For some reason I thought the rain might not last (we’d been lucky thus far) and I also believed the forest canopy might protect me. Ignorant.

After about fifteen minutes rain gear became moot. I was soaked. My ego took a bit of a hit as well when a misstep propelled my ass into the mud. Profanity ensued. It reached a crescendo when the rain sack protecting my backpack fell off and my water bottle with it. My profane ejaculations may have frightened En just a tad. I deemed it necessary to explain to him that I was frustrated with myself not him.

When we emerged from the jungle our chariot awaited our return. En’s friend drove his moped to meet us. Like doing math? Put two Indonesians and a lanky goofball on a small motorbike. That is a recipe for fun. Just to make it interesting add two backpacks as well. So you have En driving with my backpack in the space between the handlebars and the seat, Goliath in the middle and his friend wearing En’s backpack riding caboose. I was pressed more compactly against En than I have ever been pressed against another man in my life. Nothing like smashing your balls against a small Asian.

I made it to the hostel, bid En a fond temporary farewell, packed up my things and drove an hour back to Sungai Penuh. I was beguiled by the thought of a hot shower made all the more alluring by a four day bathing drought. Although the trek was only one night I had not had the pleasure of a wash for a few days. The hostel had a mandi (wash basin) with a ladle for basting one’s self but the weather and the water were a bit chilly so I abstained. Not really sure why as I have used this method on more than one occasion. I guess after a while you just get used to being dirty. You also get used to not looking at yourself in the mirror. I was every bit as sexy as you would imagine. Add a layer of volcanic ash to the equation and you have one irresistible hunk of a man.

I did manage to get to the hotel of my dreams (i.e. any hotel with a hot shower) and was a soggy, muddy monstrosity upon entering the lobby. I left a trail of muddy footprints all the way to my room. Classy. I was also pleasantly surprised to discover that everything in my bag was drenched. Just one more little punch in the nuggets to remind me of the jungle.

The finale may have been trying but the trip as a whole was amazing. I enjoyed it so much I am planning to have En lead me on a three day jungle trek in hopes of spotting Tony the Tiger. That may be in a week or so as En wants to go in ahead and survey the route and make sure the forest has not reclaimed the path.

This morning a hotel employee knocked on my door with a friend. His friend is a student of English looking for some practice. So they decided it would be a good idea to drop in and see if I was game. Before anything was explained to me the friend asks, “I join you?” to which I replied, “Whaaaaat???!!!”.

He was only looking to improve his English but had I not known better I might have thought he was looking for a little freaky-freaky. Although their approach was a teensy overbearing I still might have put on my tutor hat if I was not so utterly wasted from the climb. I suggested we meet later but I did not see them again. Only in Indo.

If you wish to hire E En (highly recommended) here is his contact info: