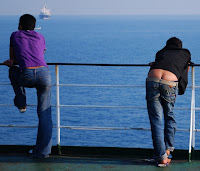 April 25th, 2009 - Where do I begin? I found my ferry. Maumere to Surabaya. Roughly 65 straight hours on an Indonesian ferry. Who wouldn’t want to do that? I was hoping to spend a couple of days in Maumere but when I went to inquire about the boat I discovered that it was leaving that very night and the next ferry would not be departing for five or six days. This was particularly distressing as I had just met two attractive Dutch women with whom I was hoping to become better acquainted. Fiddlesticks!


There is only one boat that constantly makes the trip back and forth. So I gathered my things and showed up at the dock around 8 pm. The boat was scheduled to leave at 9 pm. I will give you one guess as to whether it departed on time. I passed out not long after boarding but I know we did not get moving until after 11:30 pm. 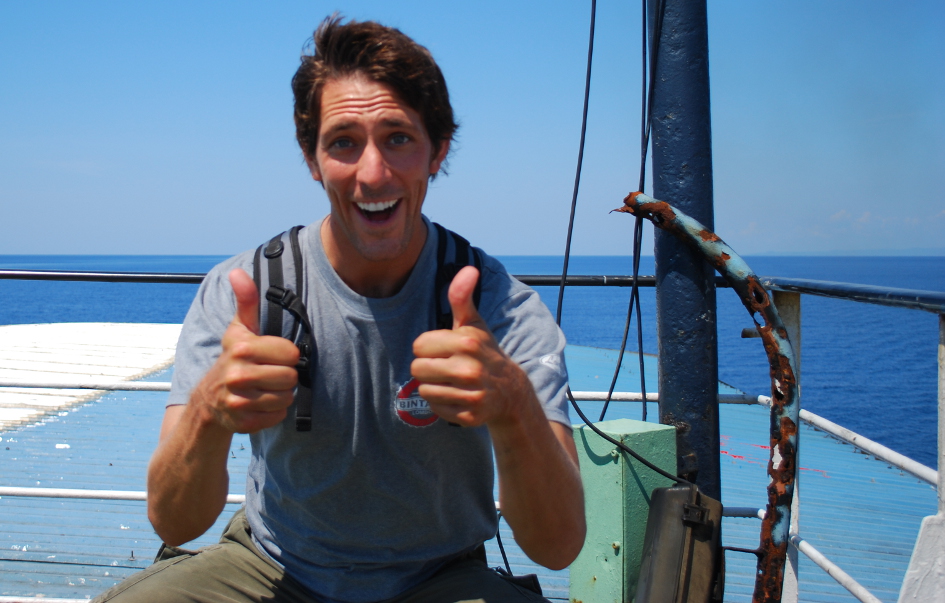 Only economy class tickets are available for purchase but I was told by the agent I dealt with that once on the boat it is possible to strike a deal with the crew and acquire a cabin. I should have known better. Only economy for this gringo. I thought about flashing a little money to a crew member but if they do not offer right off the bat, especially to whitey, the chances are it is not possible.

Fortunately, the boat is far from packed so I can avoid spooning with a truck driver. Upon boarding I quickly conducted my own inspection. It is fairly large with a communal sleeping area, a cafeteria, small health clinic, a musholla (small prayer room for Muslims), a TV viewing room (there is also a small stage area for a band or semi-professional karaoke stars as it were), bathroom facilities, and a viewing deck on top of the boat. Not exactly Carnival cruise line but it could be worse. 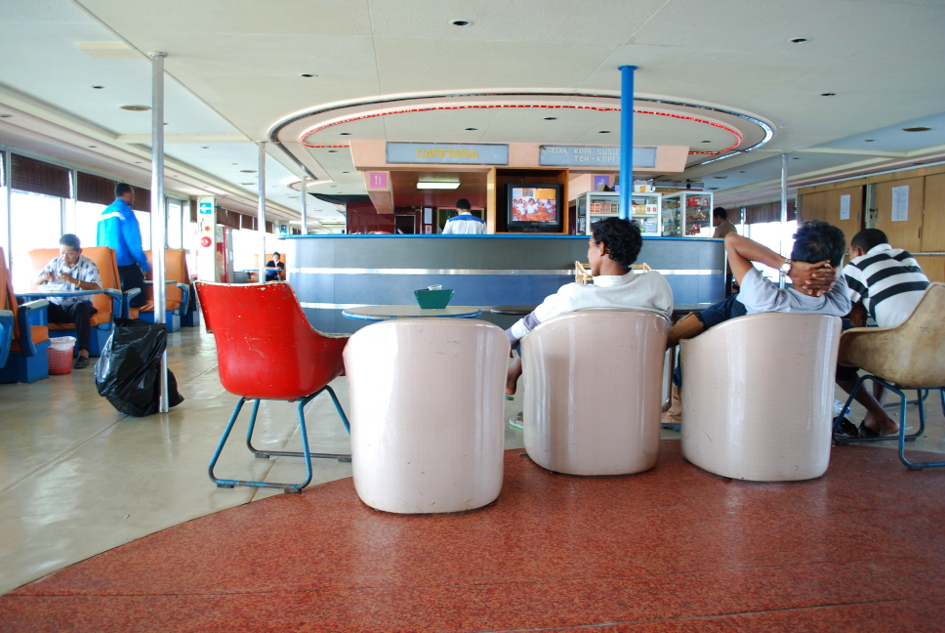 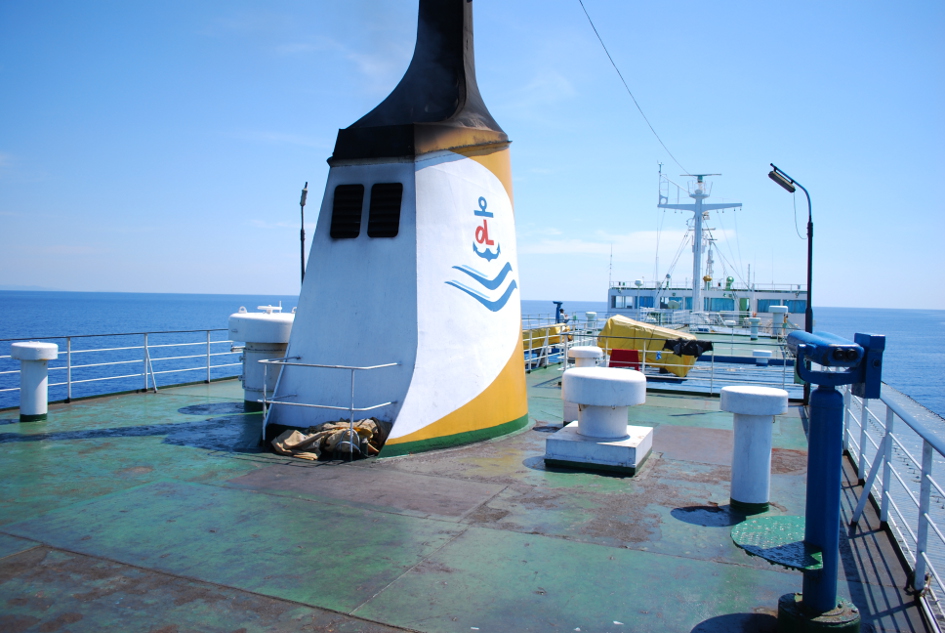 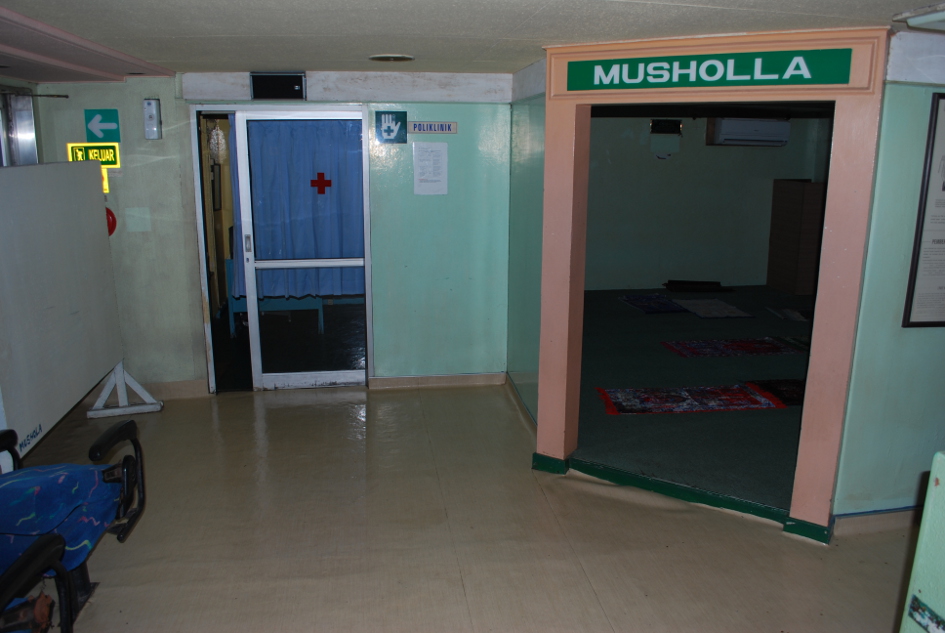 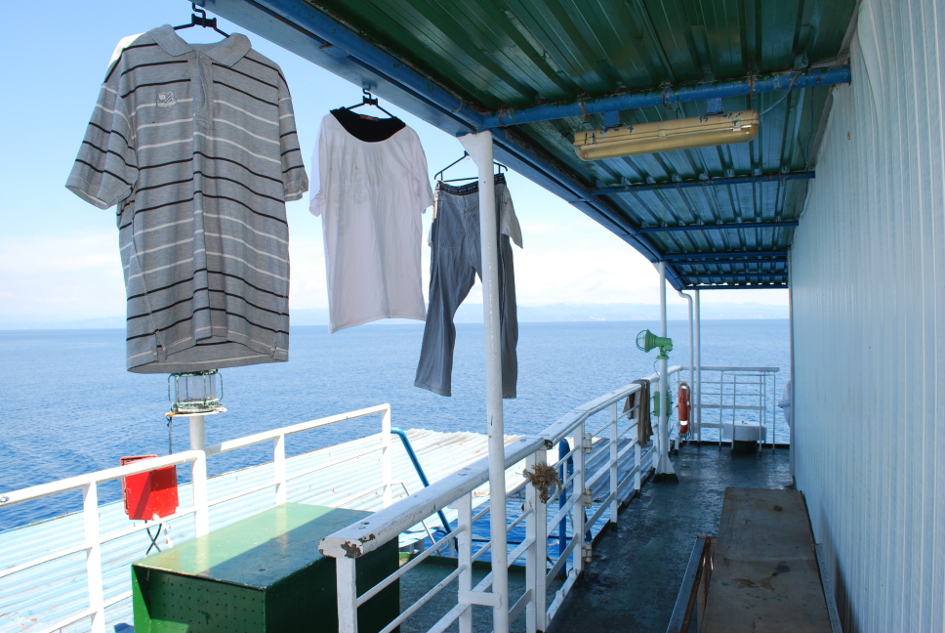 The sleeping area consists of bunk beds pushed together in long rows. There are fairly thick foam sleeping mats that are surprisingly comfortable. The bathrooms leave a little bit to be desired, at least by my overblown luxurious First World standard. Drop toilets, which means I have a chance to hone my squatting technique.....and my aim. One of the first things I noticed was the conspicuous lack of toilet paper (or ‘white gold’ as I like to refer to it). Each stall contains a bucket of water and a plastic ladle for scooping (no flushing mechanism). Had I not brought my own supply I would be using my left hand like everyone else. I try not to think about all the feces probably flying about on the boat but it is always in the back of my mind, especially when consuming food prepared by crew members using the traditional left hand method. Thankfully, I also have a small bottle of hand sanitizer. Not sure if it really does much but it is a useful self-delusion. 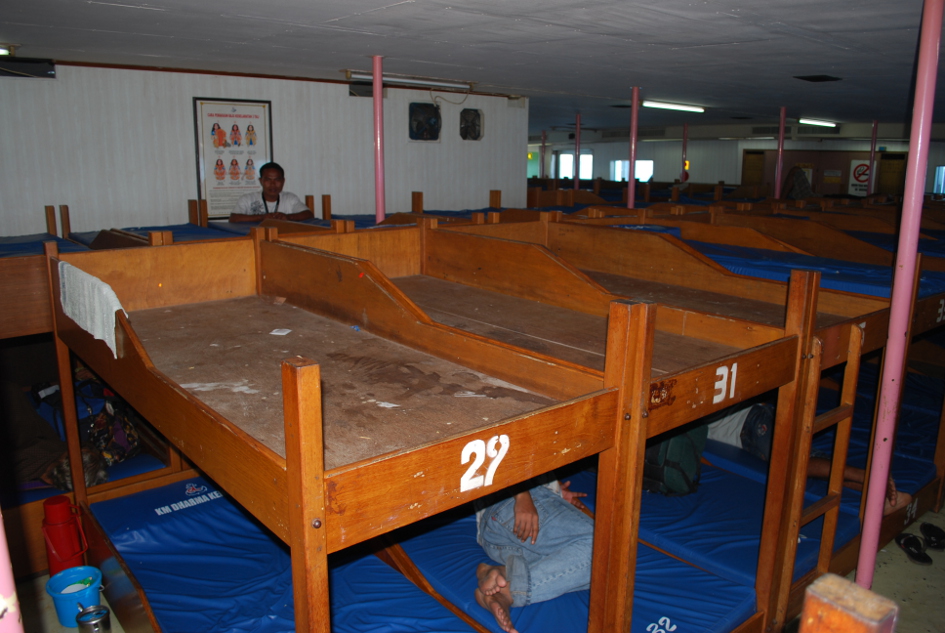 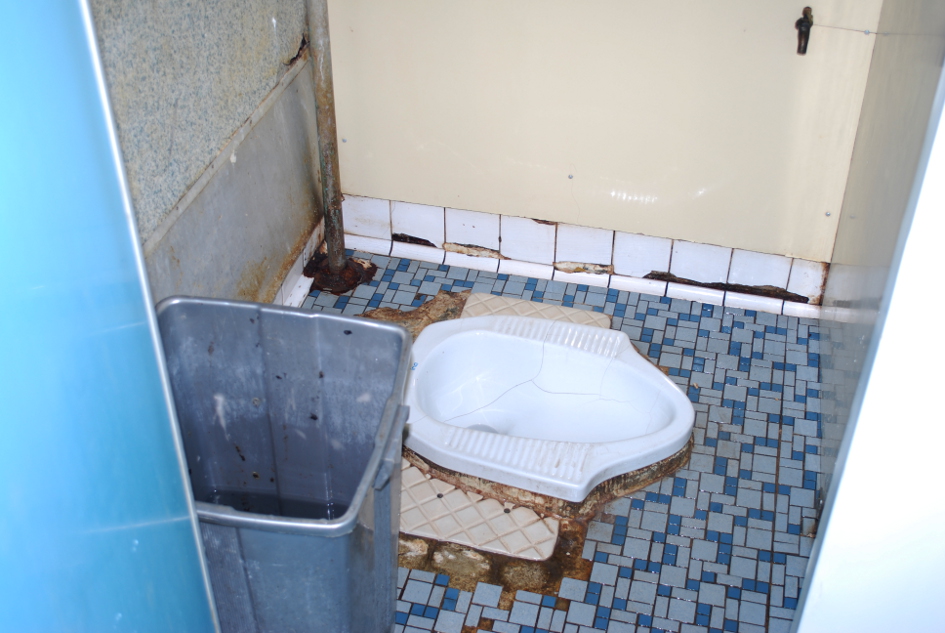 There are no showers to speak of, merely large plastic drums of water with the same before-mentioned ladles. So it is not uncommon to enter the bathroom and see a naked Indonesian man basting himself with water from the drum. I‘ve seen enough naked Indonesian men to last me a lifetime. I have yet to have a go. I’ve been content to wear the same clothing and let my body develop that film of grease that is a bit like covering your skin with a thin sheet of sun tan lotion. Delicious. I think a nice hotel may be in order after this pleasure cruise. 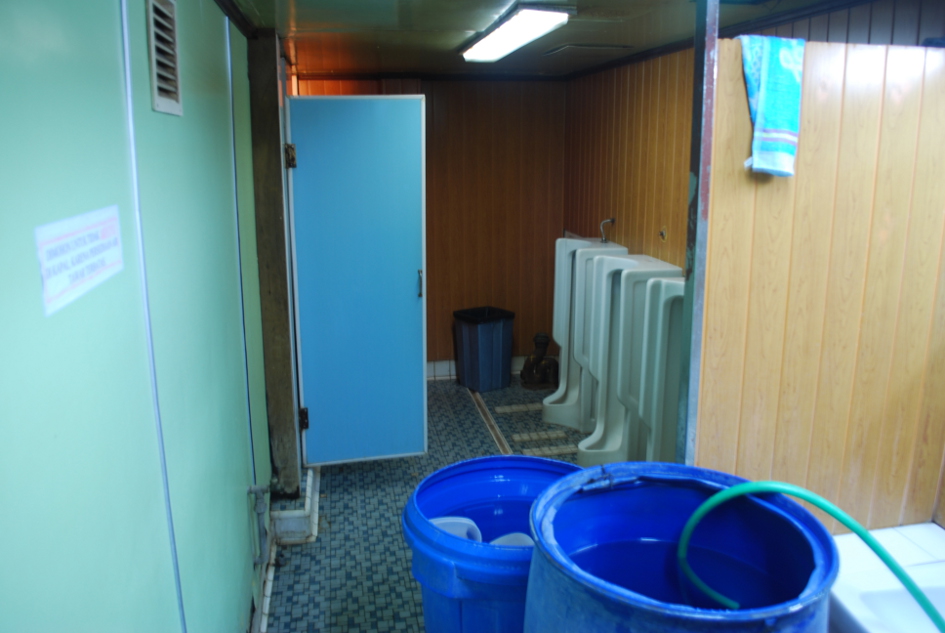 As far as I can tell most of the folks on the boat are truck drivers (many delivering bananas or other types of cargo) and their relatives, although I am sure there are a few who utilize this ferry (as opposed to the passenger-only ferries) because it is a bit cheaper. As you might expect I am the only cracker.

The motorcycle is the only reason I would ever consider taking this boat, otherwise it would be plane or passenger ship. Most of the drivers spend their time traveling back and forth on this ferry. In fact, many stay in either destination (Maumere or Surabaya) just long enough to deliver their payload and then hop right back on the boat. If they are lucky they spend a week in one of the ports waiting for the boat to make another rotation. Not such a glamorous lifestyle.

As always I am the center of attention, which would be a problem if I was not so vain and in constant need of the spotlight. Everywhere I go I am under steady surveillance. And, as always, folks take great delight in having their photo taken. It is unfortunate that my language skills are not up to snuff because it would be an incredible experience to be able to speak with any and everyone. I am sure they have an interesting perspective. As it stands I must be content to sit or stand in awkward silence while being scrutinized by the locals. As far as I can tell it is harmless, simple curiosity. They find just about everything I do fascinating and take great amusement whenever I open my mouth, especially if I try to speak a few words of their language. One of the reasons I hesitate to strip down and start ladling water over myself in the bathroom is the potential stir it might foment. I mean seriously, what Indonesian would not jump at the chance to see a naked white man? Perhaps, I am overstating a bit but then again.... Not sure I am ready to have my entire anatomy analyzed, pondered, and discussed just yet. 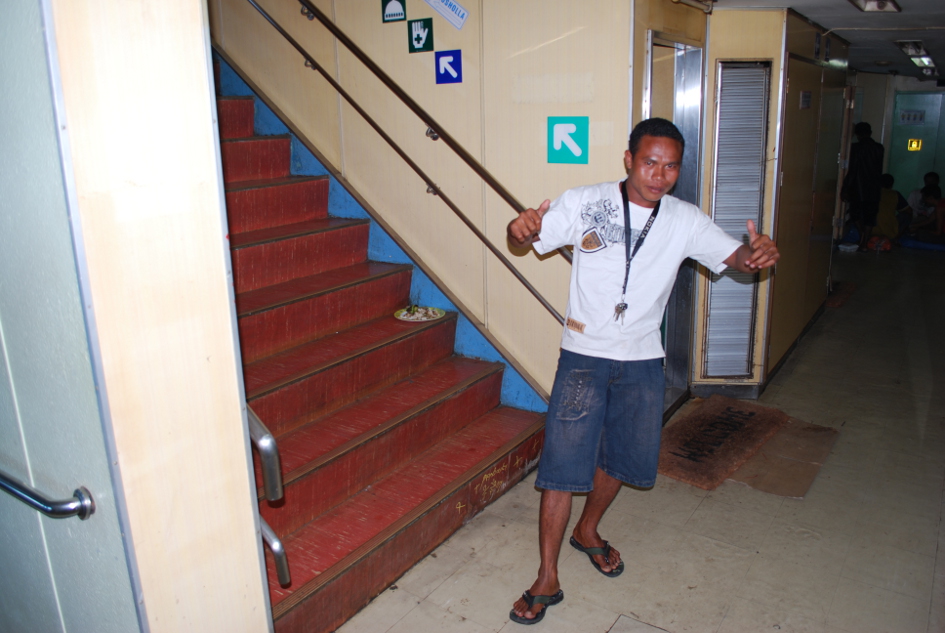 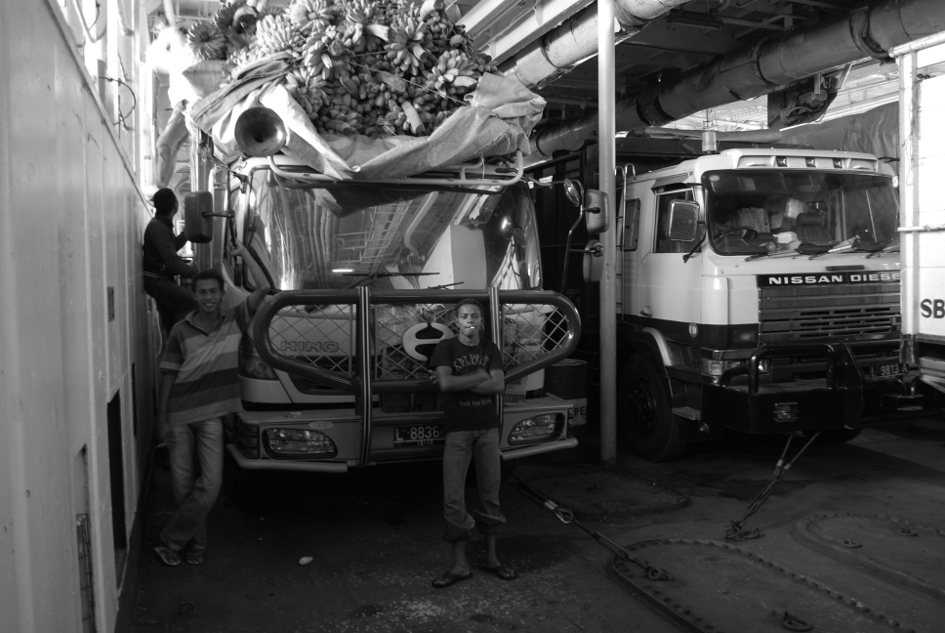 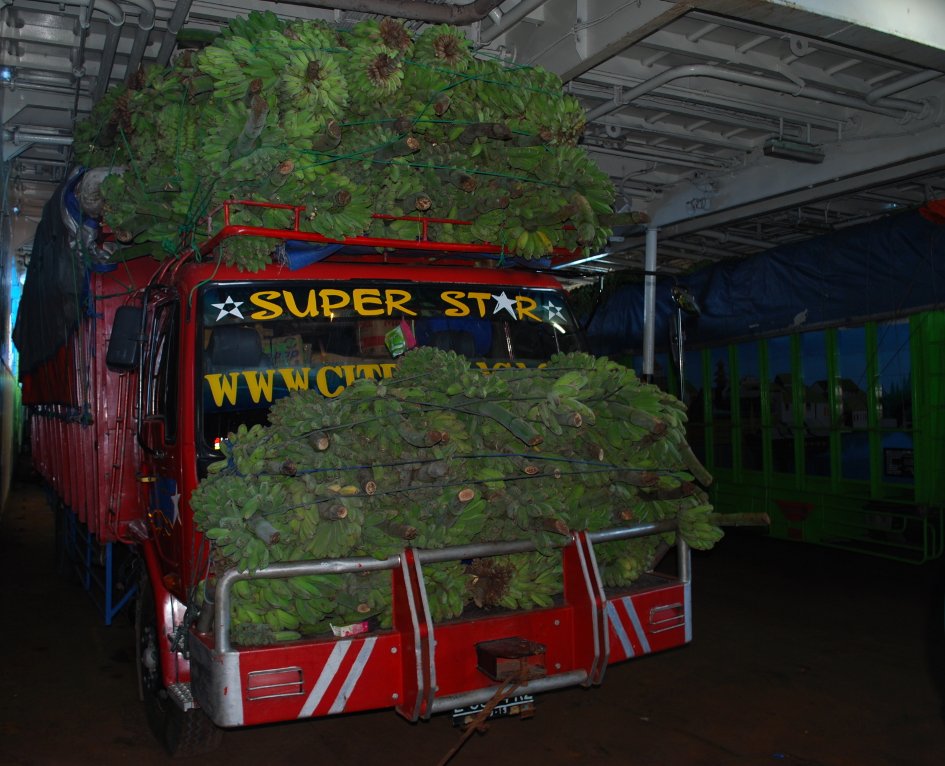 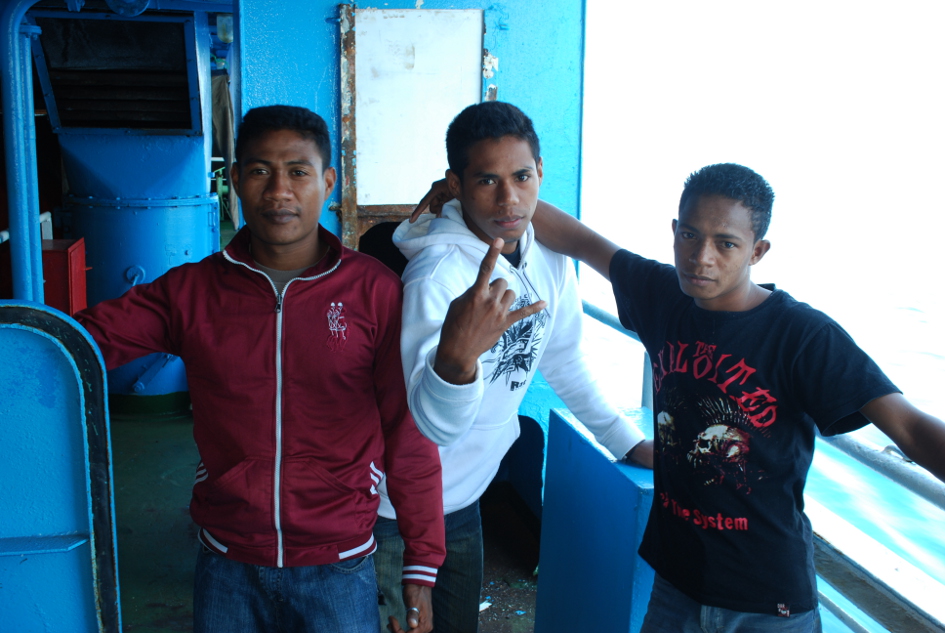 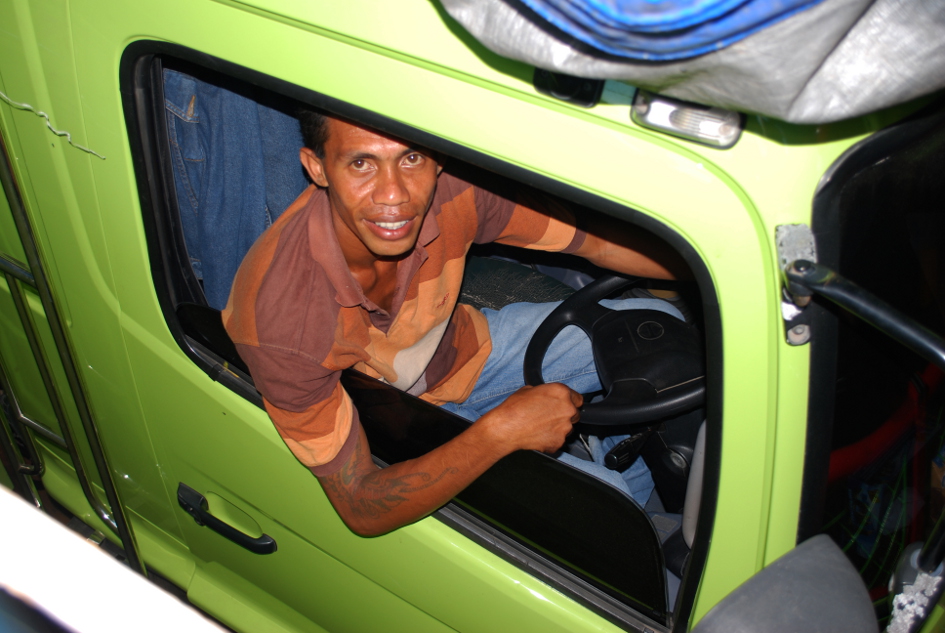 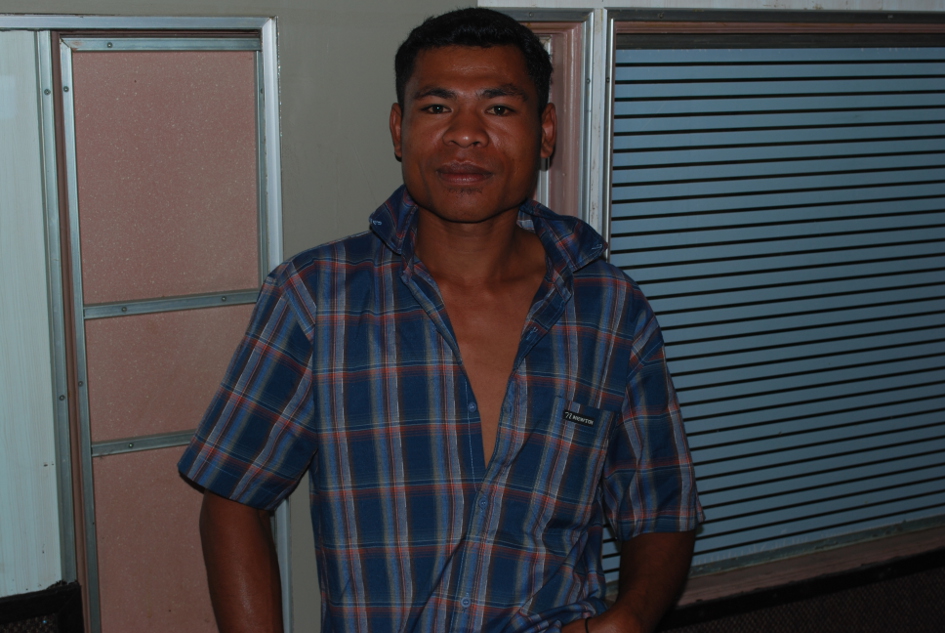 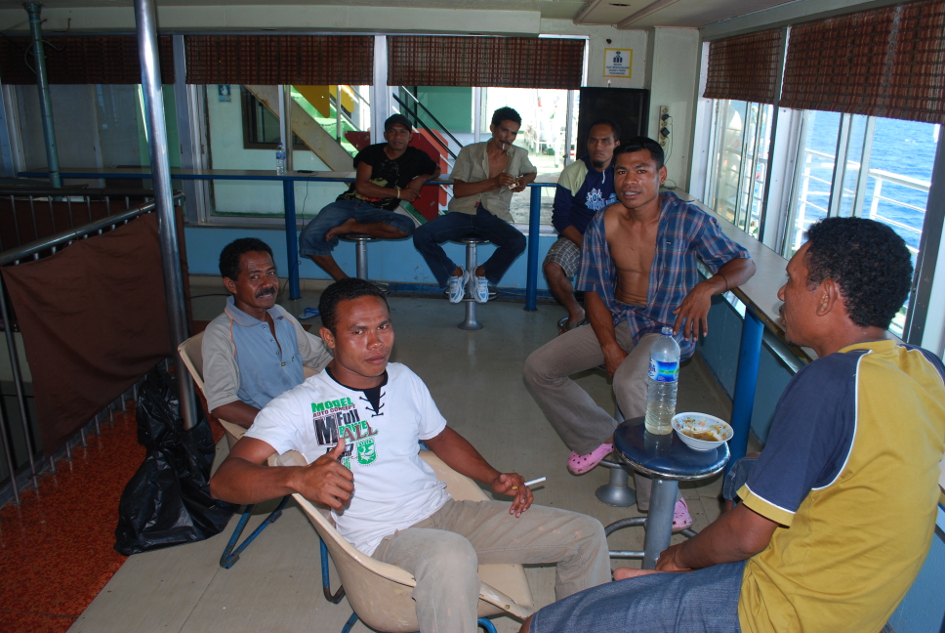 I am a little fearful of my motorcycle as it, like me, draws a considerable amount of attention. I periodically venture below to check on it. So far so good, knock on wood. 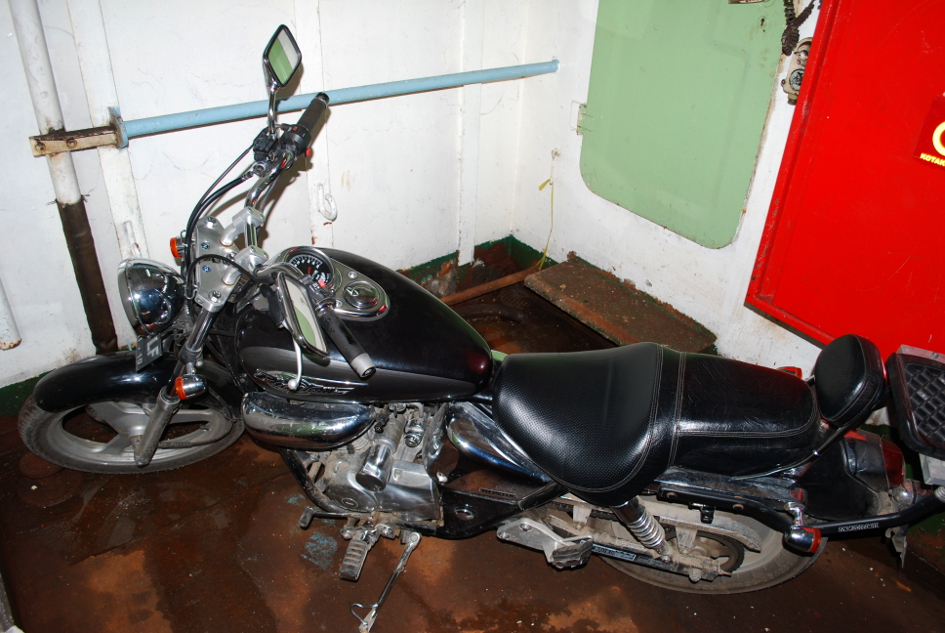 Having a computer does nothing help me remain inconspicuous. I was happy to discover that I still have a few episodes of Lost on my hard drive, which helps pass the time a bit. While viewing in the cafeteria it is common for a passerby to stop and take a look, sometimes for a good ten minutes (in fact there is someone watching me at this moment). This is where my writer/journalist fantasy comes into play. I tell people that none of the stuff is actually mine and that it is provided by work in hopes of dispelling the idea that I am a mega-rich tourist. I'm sure it is all in vain but it gives me something to talk about in lieu of those awkward silences I mentioned above.

The cost of this wonderland vacation is about eighty-five dollars, which includes the bike (less than half that for passenger only). And it does include meals so stick that in your pipe and smoke it.

I was invited to play some cards and do a bit of gambling. That had ‘bad idea’ written all over it so I politely declined. Imagine me sitting down with a bunch of Indonesian truck drivers and throwing some of my tourist dough around. All I have to do is keep raising until they run out of money. Just for effect I could throw big wads of cash on the pot and scream, “Anyone here got the balls to play with the big boys? Huh? You? How about you? Pussies!!!!! U-S-A! U-S-A! U-S-A!” Maybe not. 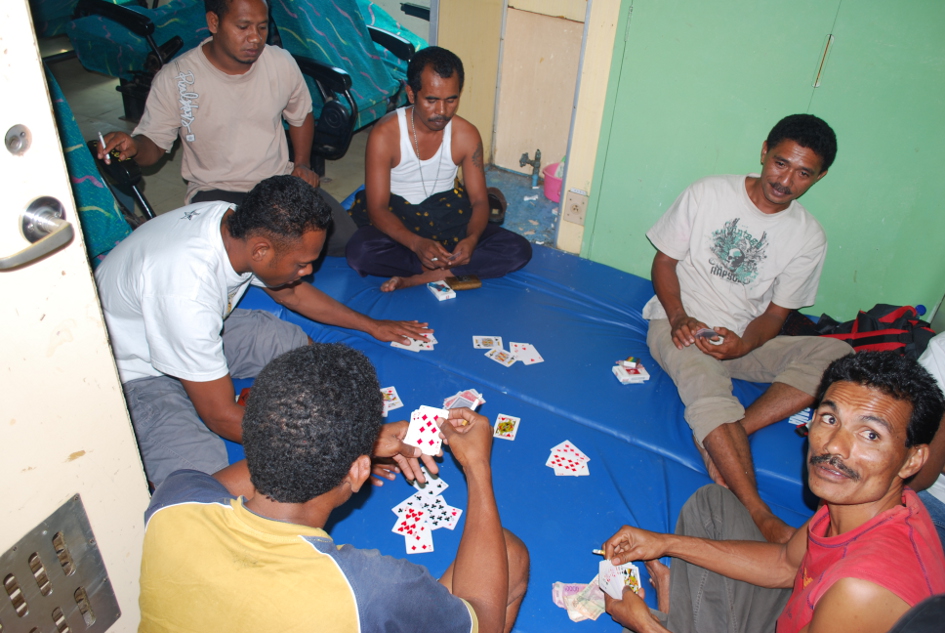 There is a call to prayer for the Muslims at 5 am blasted over a loud speaker. Forgive my religious insensitivity but I could do without it. The volume of the TV in the sleeping area is set right at two million decibels. Perfect.

Some of the locals have really tried to bond. Basically, this means they want me to sit down and have a drink of the local brew, known as arak. You can find it all over Indonesia (in the Middle East and Southeast Asia as well) and it is usually sold in reused water bottles. I am not too sure where it is produced but I am starting to think people make it in their basement. That is about how it tastes. I’ve been told that the production process is so inexact that a batch could be anywhere from twenty to eighty proof. People have died after sipping a batch containing too much methanol. I try to avoid drinking it but it is most kind of them to offer. I feel a bit guilty about abstaining but a hangover on a long ferry ride is not something I am particularly interested in. 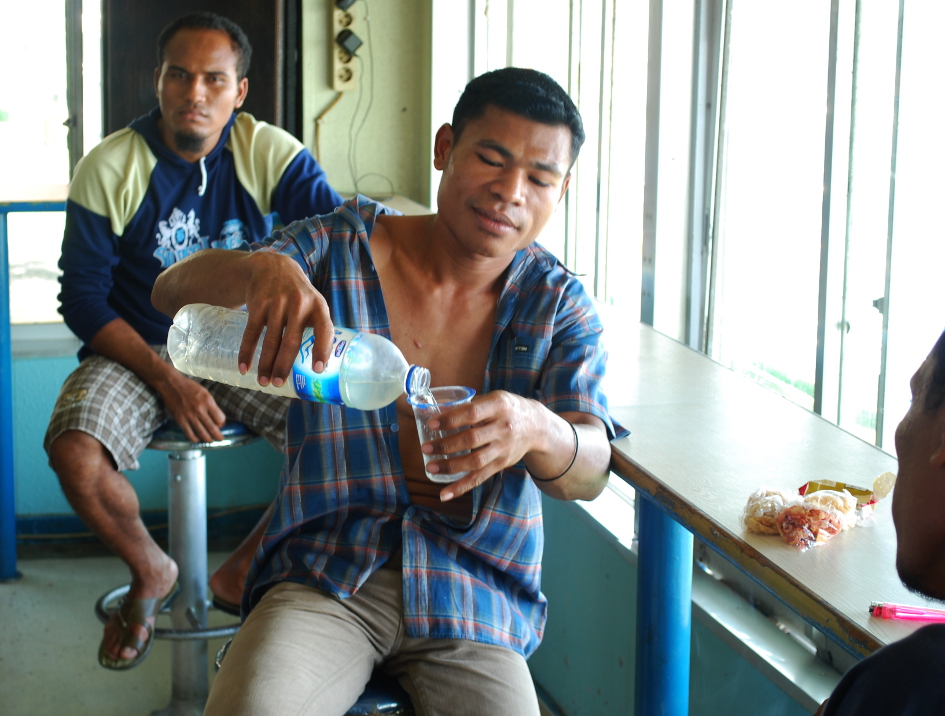 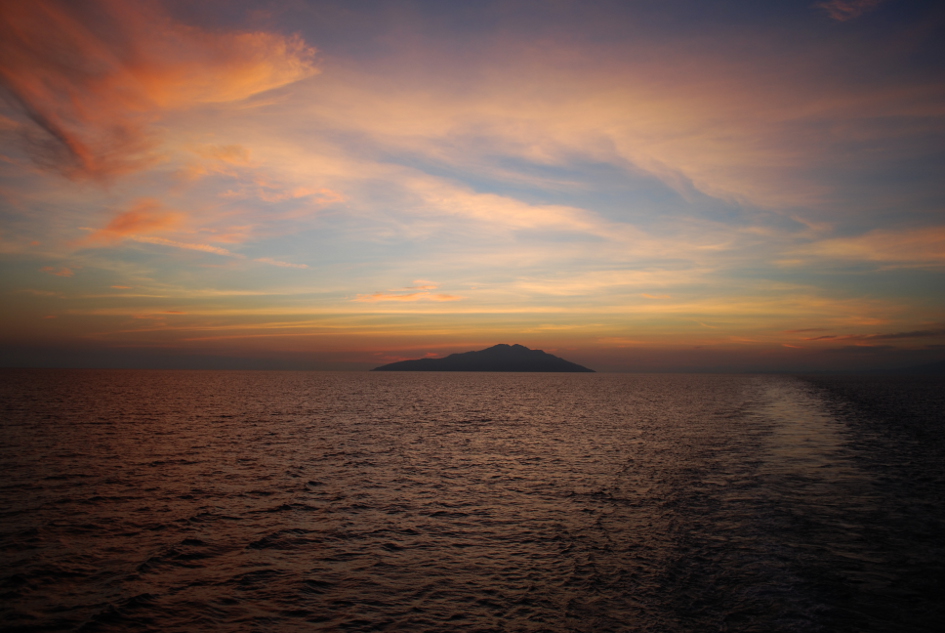 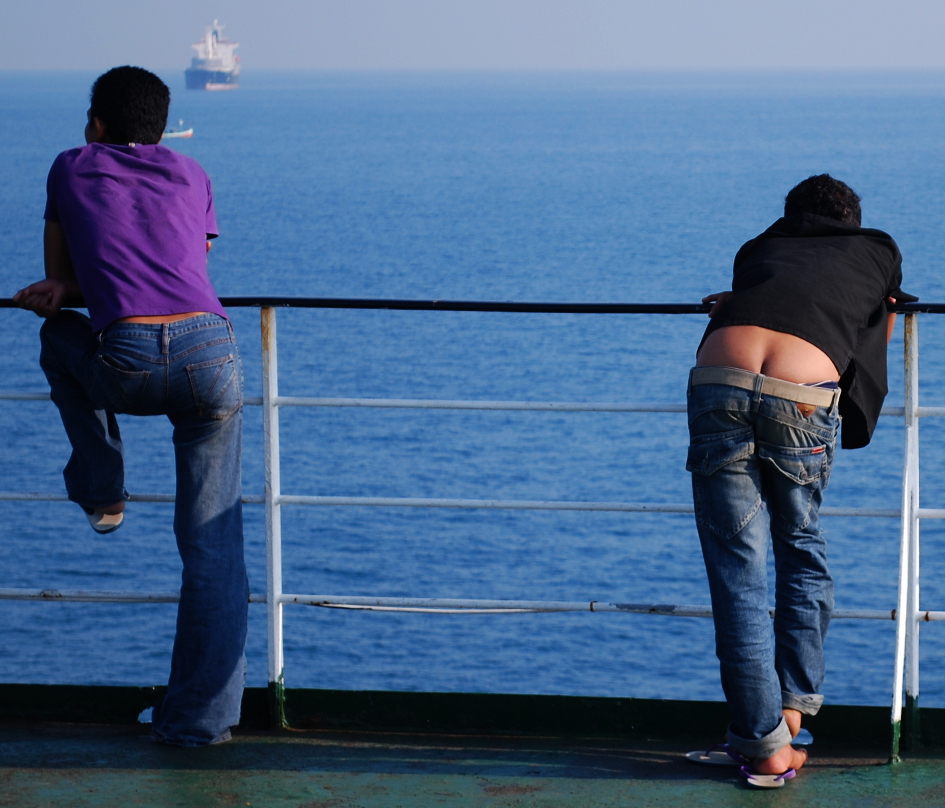 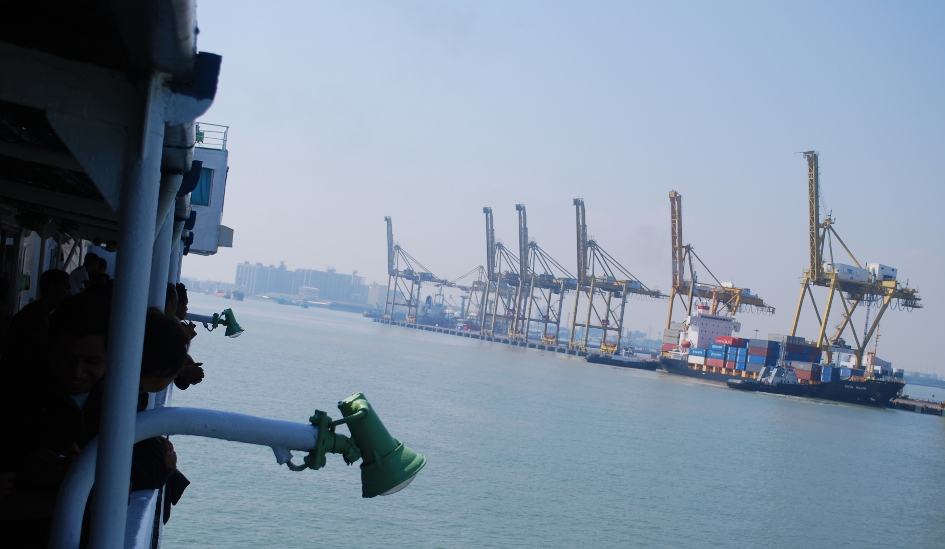