So I left Ende and headed farther east to a small village nestled in the mountains by the name of Moni. As has been the case throughout Flores the road weaved through mountain landscapes via switchbacks and forty-five degree turns. A truck load of fun on a motorcycle.

There is not much in the town of Moni itself, rather it is the nearby volcano that draws visitors. The three crater lakes of Kelimutu (pronounce Kelly-moo-too) are truly a sight to see. Not only are each of the lakes a different color, the colors actually change with time. While I was there the colors included turquoise, dark green, and black.

The change in hues is attributed to the dissolution of minerals in the water or a mischievous wizard living in the hills nearby. Past colors include blue, maroon, and varying shades of brown.

There is no hiking to speak of. The road from Moni leads to a parking area and from there it is a short walk to see the craters. I actually drove up there twice, once on the afternoon of my arrival and then again early in the morning the following day. I wanted to see the lakes at different times of the day in order to catch the full gamut of colors. I discovered that the best time is in early to mid-morning. In I fact I spent about three hours on the crater rim. It was an excellent experience. Highly recommended. 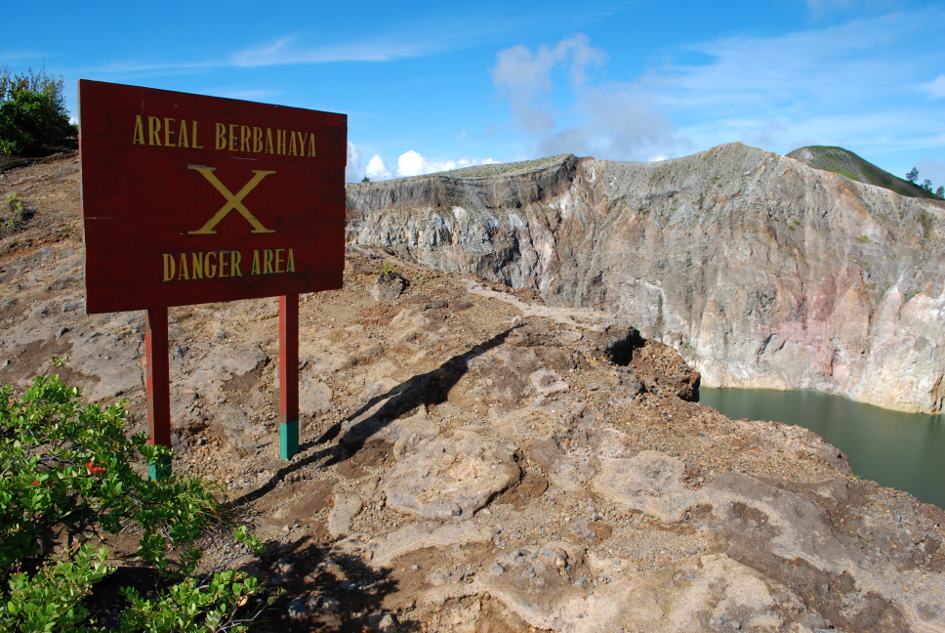 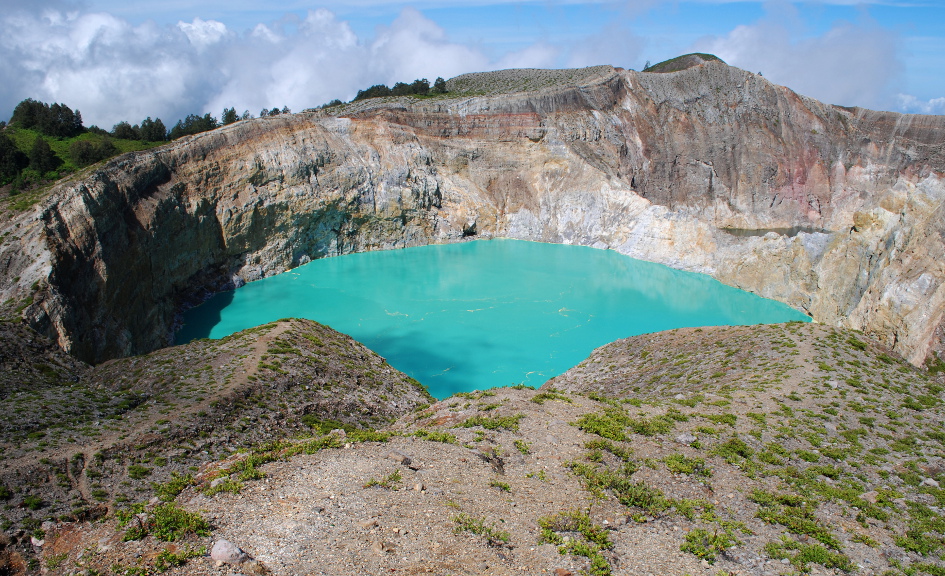 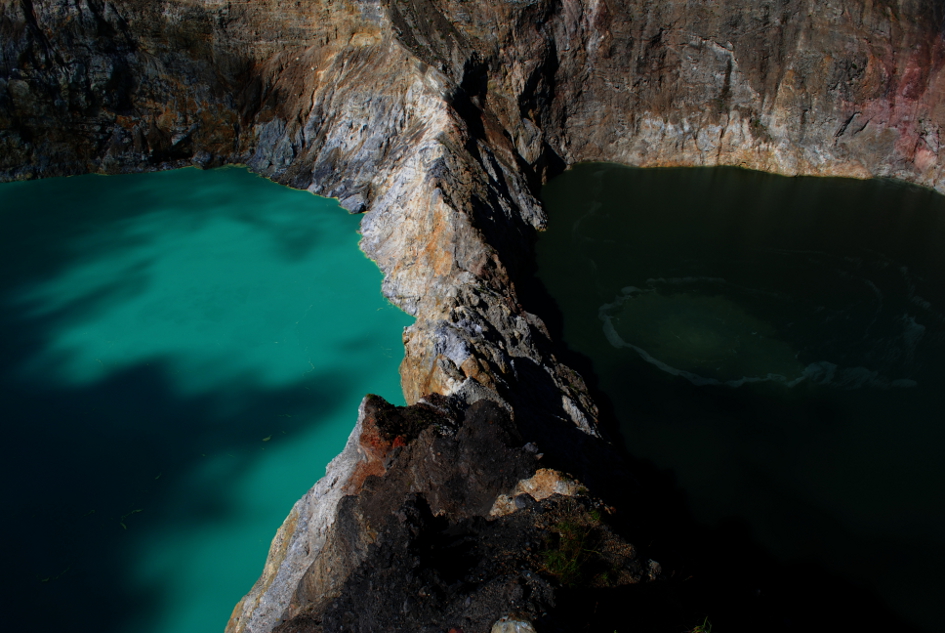 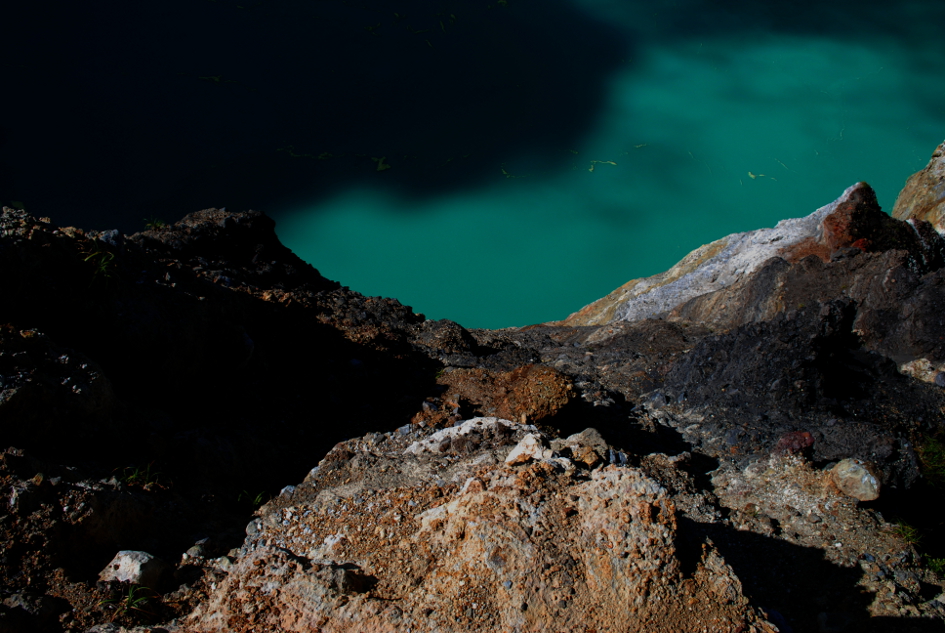 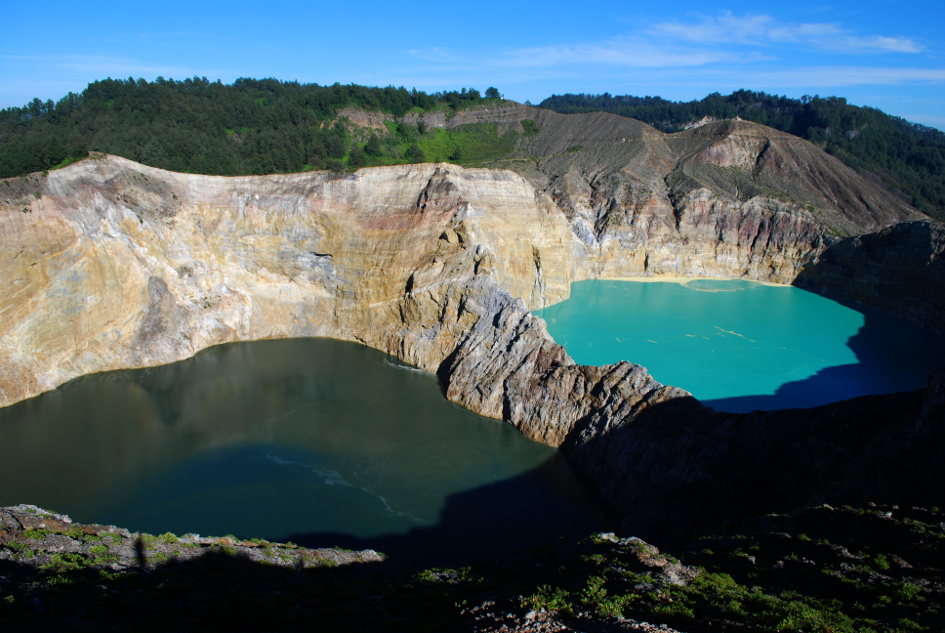 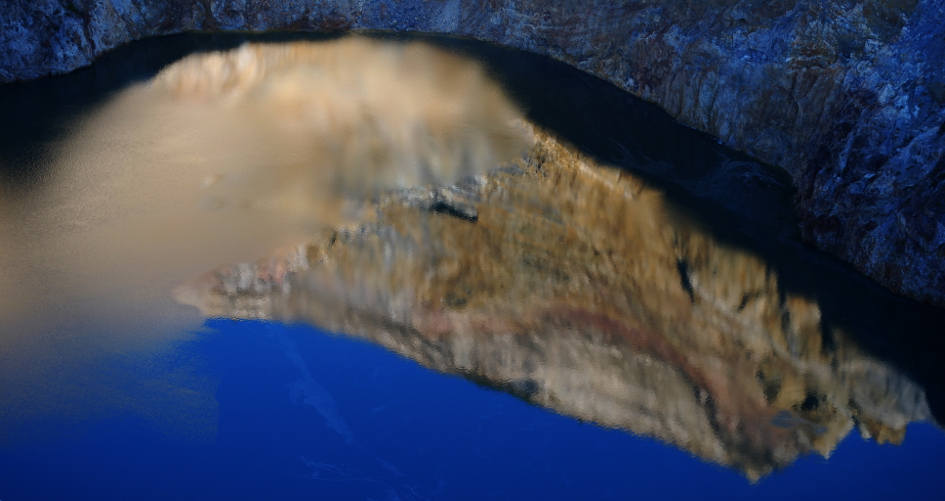 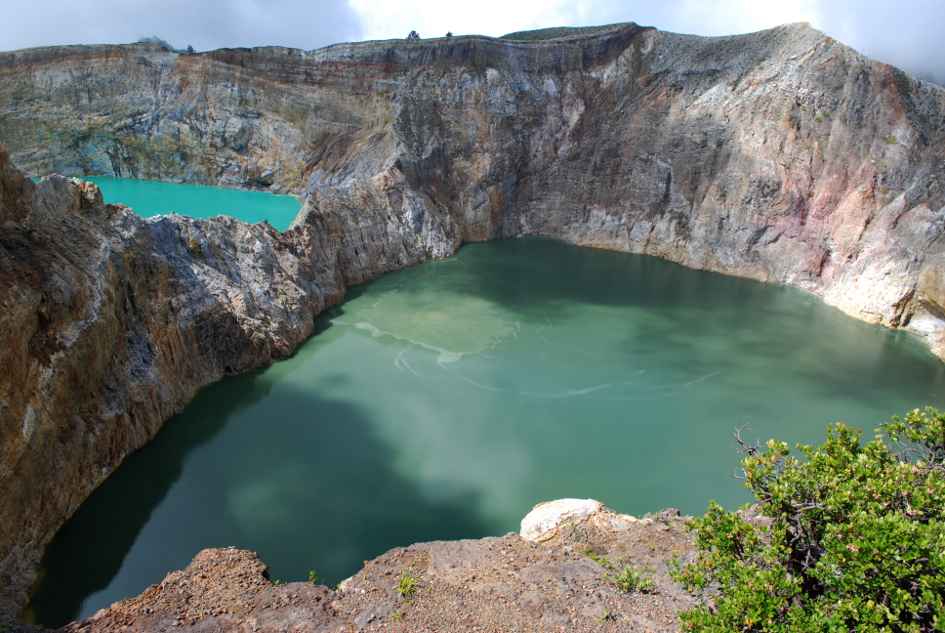 The locals believe Kelimutu to be sacred. A sign at a viewing point explains that it is believed that souls of the dead find their way to the lakes when they pass on. The souls of youth go to Tiwu Numa Muri Koo Fai (turquoise lake), the old go to Tiwi Ata Mbupu (dark green lake), and the naughty souls are destined to spend eternity in Tiwi Ata Polo (black lake). Don't be naughty.

There is a local that provides tourists with a guided walk around the crater rim for a small fee. He even has a small slip of paper with an explanation in English (written by an Australian woman) to assuage any potential client’s concerns about his trustworthiness. The note begins, “To Whom it May Concern…..” Ironclad.

While I was on the crater rim he brought a French couple to enjoy the view. He also brought hot coffee, much to my delight. As I stood there sipping the local brew I watched him put a little bit of coffee, sugar, tobacco, and pieces of a cracker I shared with him on a nearby rock. After a moment of confusion I realized he made an offering to appease the spirits of the mountain. And to further this aim he enlisted me in a short game of ‘dress-up’ as it were. The only words in English he uttered were ‘ceremony’ and ‘no problem, no problem’. He then proceeded to cover me in garments (handmade ikat as it is called). I could not exactly argue. I mean who wants to piss off the spirits of Kelimutu? Not I. 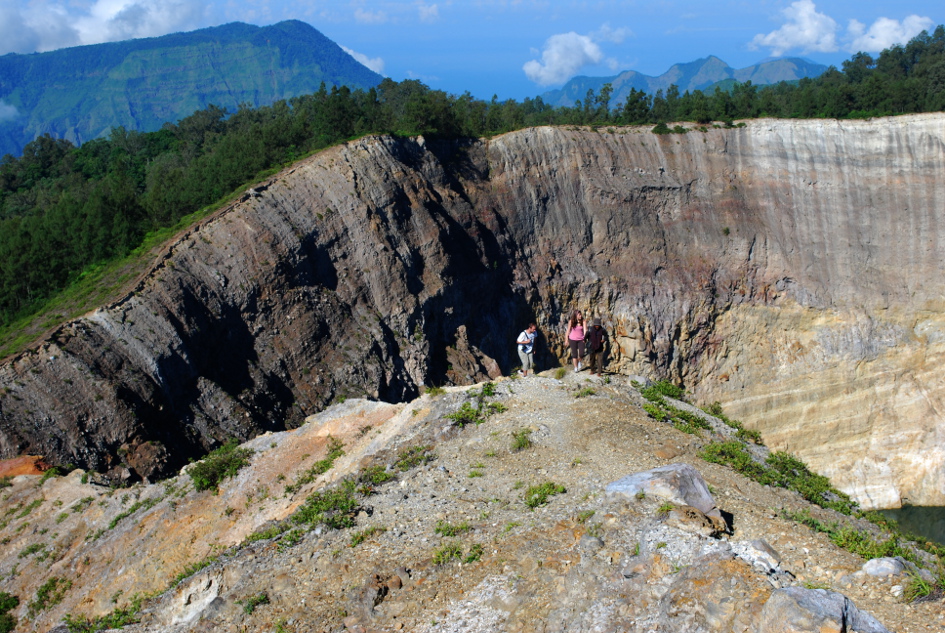 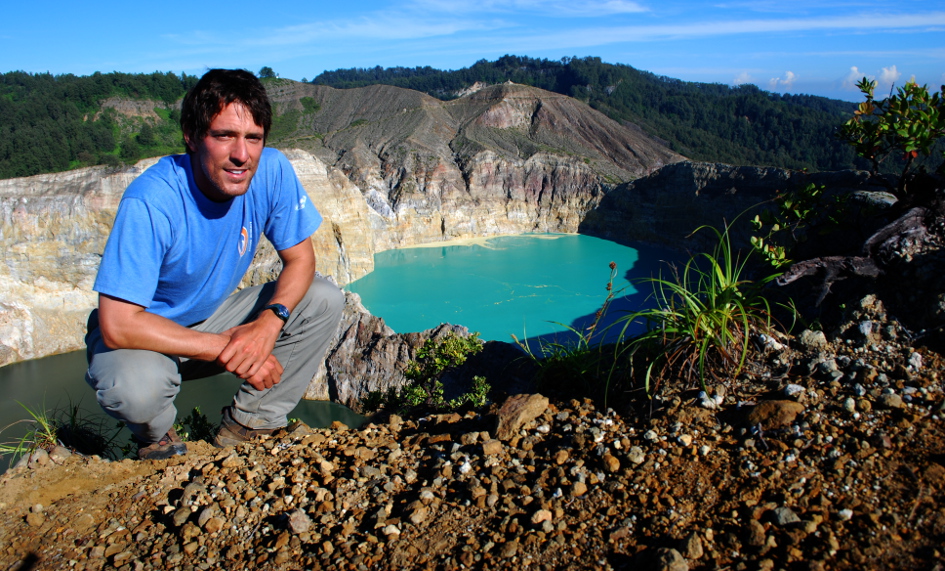 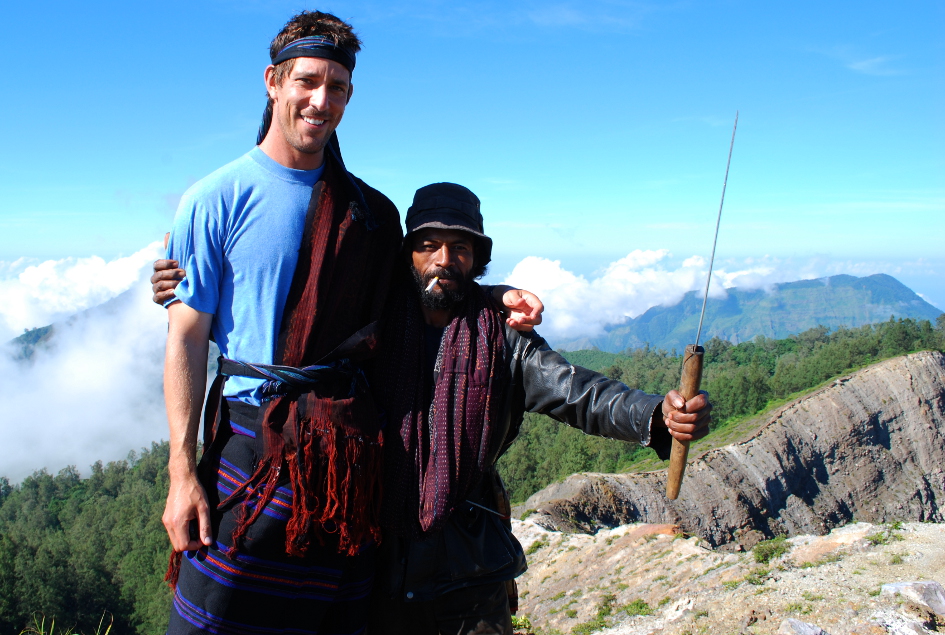 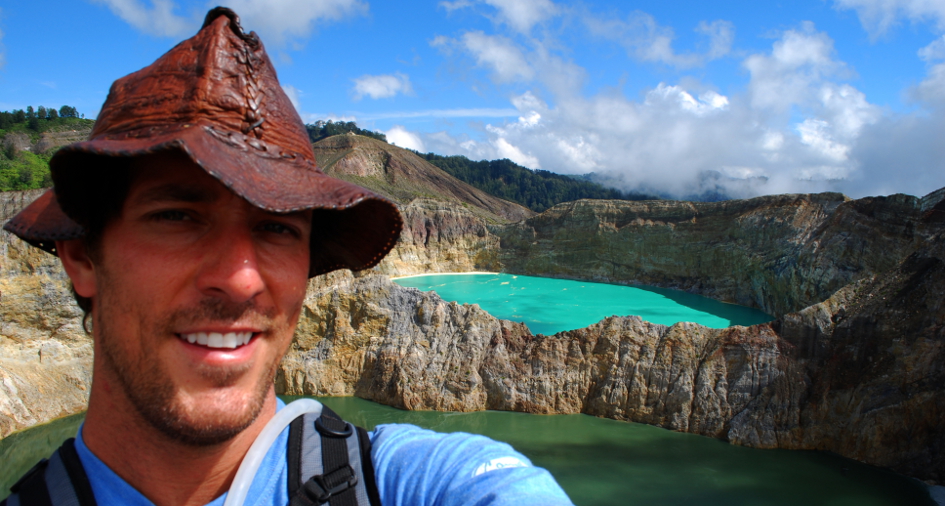 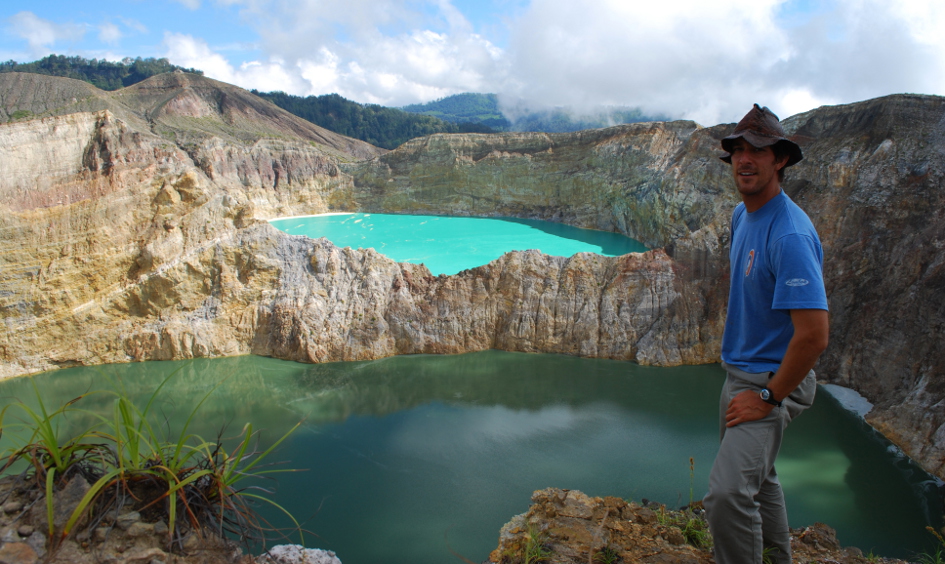 After he and a few other tourists moved on I conducted a little ceremony of my own. I am not proud of this but Mother Nature came a calling and I was powerless to resist. Two cups of coffee did nothing to relieve the burden. Believe me when I tell you I was appalled at the idea of executing a number two atop a sacred mountain in Indonesia but I had little choice. There was not a chance in hell that I would make it to a proper facility. So I was faced with two choices: drop a load in my pants or do a poo-poo on Kelimutu. Disgracefully I chose the latter. I will say that I left no trace of my activity but that does little to console the conservationist in me. Why am I sharing this? Good question. Perhaps it is a shameless ploy for absolution or maybe I just thought folks would get a chuckle out of it. I can only hope and pray that the souls of Kelimutu are not waiting for me when I enter the Netherworld. I will have some explaining to do.

On this leg of my journey I had the opportunity to meet a rather interesting fellow, an Englishman by the name of David. Over the past thirty years he has been in and out of different parts of Indonesia (and throughout the world). He is currently living on the island of Lombok. David decided that it was time he visited Flores, something he had not done. As it turns out he is, among other things, a freelance photographer. He has countless intriguing tales to tell. One revolved around his two visits to Vietnam (during the conflict) when he was in his early twenties. He’d met an American civilian that was living there and invited him to visit. Who the hell visits an American living in Vietnam during the early seventies? Well, an aspiring photographer for one. Crazy.

While there he was approached by the local chapter of the Vietcong and invited to visit one of their villages. They were looking for an opportunity to tell their side of the story. He wisely declined but you can tell as he was relaying the account that he wished he had accepted. I was surprised he did not. After all, if you go so far as to visit a war zone you might as well go the extra mile and hang with the Vietcong, right? He was there three months before the fall of Saigon. And these tidbits are just the tip of the iceberg. What a life.

So now I am in the port town of Maumere. The guide book describes it as ‘forlorn’. I would have to agree. Luckily, I am staying about seven kilometers out of town, at a place by the beach. And now I must see about catching a ferry to Java.

Update: I am taking the ferry tonight. It leaves from Flores (Maumere) and and arrives in Java (Surabaya) about 65 to 72 hours later. It could be hell. I've heard it is pretty nice by I am expecting hell. Cross your fingers. There days on an Indonesian ferry cannot be a good idea, can it?