April 20th, 2009 - Where shall I begin? The truth is I am human. And although I am usually good about functioning in the developing world sometimes the frustration sets in. Lately, I’ve been letting it get to me. I am not proud of it but it is true. The language barrier does not help although I am starting to believe that even if I spoke perfect Indonesian there would still be a fair amount of confusion.

I need a boat, actually a ferry to be precise. I would rather hop a ferry and land somewhere in the vicinity of Bali than drive across three islands and hop three ferries…..again. I don’t mind the driving but doing the same route twice is much less interesting. So I go to the government run passenger service (PELNI) office. The Lonely Planet describes them as ‘helpful’. The first gentleman I spoke with wanted nothing to do with me as he spoke no English and had little interest in interpreting my broken Indonesian. The second guy was only slightly more motivated. They have boats that go all over but they carry only passengers, not vehicles. When asked about boats to Bali, Lombok, or Java the reply was simply ‘No’. Very helpful.

There is a boat. I know there is a f***ing boat. I’ve read about it. It goes to Surabaya in Java which is not exactly Bali but close enough. So I decide to drive down to the harbor to see about buying a ticket. I drove up and down the same street three times. F U Lonely Planet!!!! I did find the harbor. Outside the entrance are two little shops with signs for the boats Dharma II and Dharma Recana, leaving from Ende (where I am) to Surabaya (where I kind of want to be). I stop and inquire. I discover that the boat (s) does not leave from nor does it pass through Ende. For that I must go to Maumere. Okay. Not a big deal as Maumere is on my itinerary. In a fact I was fairly sure that would be the place for departure anyway. I was investigating in Ende just to be safe, although I was fairly certain a boat did leave from here. And then there was the sign that confirmed it. They might want to take down the sign but, then again, who the hell am I to criticize?


I drive down to the harbor itself for the hell of it. One word: forlorn. A teenager came from the dock area and asked me for money. It was hot and frustration was setting in. In my mind I said, “F U poor Indonesia boy asking for money without even noticing how cool my motorcycle is and not even attempting to butter me up before cutting right to the chase.” Usually when people ask for money the way he did it is either preceded or immediately followed with the showcasing of a blunt or not so blunt instrument. With the mood I was in had he tried anything funny I probably would have plowed into the bastard with my bike.

So I decide to drive to the tourist office. Here I am told that there is a boat from Ende. Super. I was instructed to go to a small shop that sells tickets to said ferry. And FYI, apparently the duration of the trip is three days and two nights. Sounds like a Caribbean Cruise except shittier. Three days on an Indonesian ferry. Perhaps not one of my better ideas but I really do not wish to make the return trip via land. Who knows, maybe the boat ride will be neato.

I arrived at said shop to discover that the boat does not leave from Ende. I have to go to Maumere. There is a boat leaving to tonight. Not going to make that one. If my Indonesian can be trusted (which it most certainly cannot) then there is another boat leaving on the 24th of April. Super.

Later I call a travel agency in Maumere and am told that a boat leaves a week from today give or take a day or so (which means sometime between a week from now and never). I’ll be there in a couple of days to sort it all out. Can’t wait.

Apparently, there was a civil disturbance in Ende today (A woman on the road told me there was a ‘fight’). I saw what I believe were riot police in the back of cargo truck and a crowd gathering in the road down which I was traveling. There was a group of young men with disgruntled looks upon their faces coming in my direction at one point. For a moment I thought someone might scream, “KILL WHITEY!!!” followed by them ceremoniously kicking my ass and destroying my bike. Luckily, it did not happen. I turned around just to be safe.

And then there was my hotel. I arrived today around noon. After visiting a few hotels I decided on the Hotel Safari. A bit overpriced but there is aircon and a shower. I dropped my stuff and went on my aforementioned quest for The Lost Ship of Ende. When I returned I decided to take a shower only to discover that the knob to turn on the water was missing. When brought this to the attention of the staff I was given another room. This room had the desired knob. It also had a bit more mosquitoes than I was comfortable with. At first I thought, “Ahhhhh it’s only a few mosquitoes. I’ll live. Kill a few with my cat-like reflexes and throw some repellent on and I will be fine.” Then I entered the bathroom. As I stood there, naked and sweating, I could feel the collective stare of a thousand mosquito eyes bearing down upon me. I think I may have heard a few of them scream, ‘LUUUUUUUCH TIME!!!!’ I’m sure I looked downright delicious to the depraved beasts. I left the bathroom and shut the door. I can deal with a few mosquitoes but if I wanted to participate in a malaria experiment I’d contact the Center for Disease Control (CDC).

I quickly made my way to reception where I informed them that there were ‘nyamuk banyak’ (a crapload of mosquitoes) in my room. I thought I would be shown another room. I was wrong. Instead an employee enters my room with a canister of insect repellent. Actually, it was one of those pump devices with the canister on the end, like the ones I used to see in cartoons. He starts to spray. And spay and spray and spray and spray and spray and well, you get the picture. I was assured the fumes were not toxic (Uhh-huh). That was good to hear because there was now a cloud of gas in my room and you could taste the air three doors down. It was foul. And since my stuff was in the room it will now be mosquito proof until 2030. And the shit was potent. Mosquitoes were literally falling from the sky. It was a sight to behold. My room was a veritable ‘Valley of the Fallen’. The floor was covered with dead mossies. The picture I included does not do it justice. I actually removed all of my belongings from the room and started clicking pictures. It was a bit of scene. There were other Indonesian guests sitting outside their rooms watching the whole ordeal. Not sure what was going through their minds. 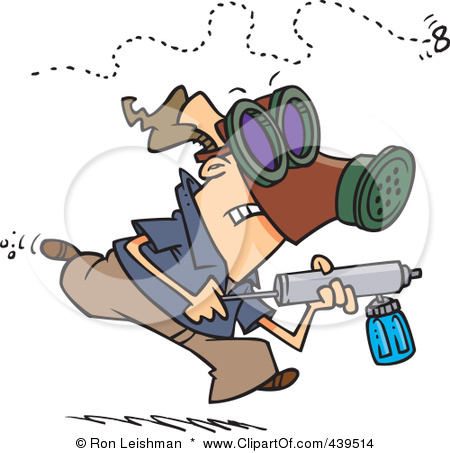 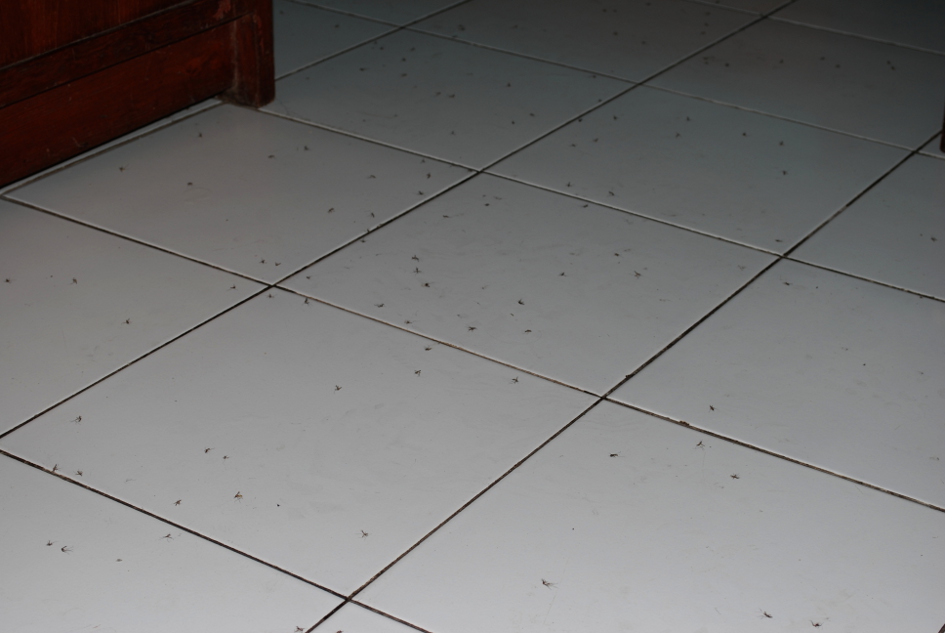 I assumed that I would be shown another room. After all mine should have been quarantined and designated for toxic cleanup (the floor was sticky) to say nothing of the mosquito carcasses littering my floor. Oh no. All that was needed was a broom and a smile. Their solution was to petrify my room with chemicals and sweep away death. Seriously? I’m pretty easy going but this was a bit much. I packed my shit and hit the road. Well, sort of. I went next door.

Another causality: I lost my sunglasses. Damn it.
Posted by Rich at 11:09 AM