For an updated version of

April 9th, 2009 - If yesterday was the reason I bought a motorcycle today is the reason for all the sojourning. A friend of a friend (i.e. a borderline stranger) met me in Bima (Sumbawa) and was gracious enough to give me a tour and introduce me to his family members . . . . all of them. Imin is a decent fellow. He is twenty-three-years-old and teaches English to high school students in Bima.


Unfortunately, his English is not quite what you might expect, especially from a teacher. In fact most of our conversations ended in confusion (mostly for me). Money is tight and you make do with what you have. If I could sit still for more than ten minutes I would spend a few weeks improving Imin's English. Where's the Peace Corps when you need them?

He picked me up around 7:30 am and we headed off to the outskirts of Bima. In all we visited his aunts, uncles, father, stepmother, mother, stepfather, and his brother. We made the rounds. I think it impossible to exaggerate the rarity of a tourist, especially one of a western ilk, visiting villages in the countryside of Bima just for the hell of it. Development workers? Sure, but not a 'tourist'. People did not just stare, they pretty much stopped whatever they were doing and became motionless, at least for a couple of seconds.

Everyone was curious and extremely friendly. When they saw my camera most wanted to have their picture taken. It was, for lack of a better word, adorable. None of his family had ever had a tourist, much less an American visit their homes. They were honored and treated me like a member of the family. Frankly, it was fucking incredible. And they were up for pictures as well. When I was at Imin’s father’s house photo time brought on the shuffling of chairs, smoothing of clothing, and a tiny bit of primping. Also adorable. 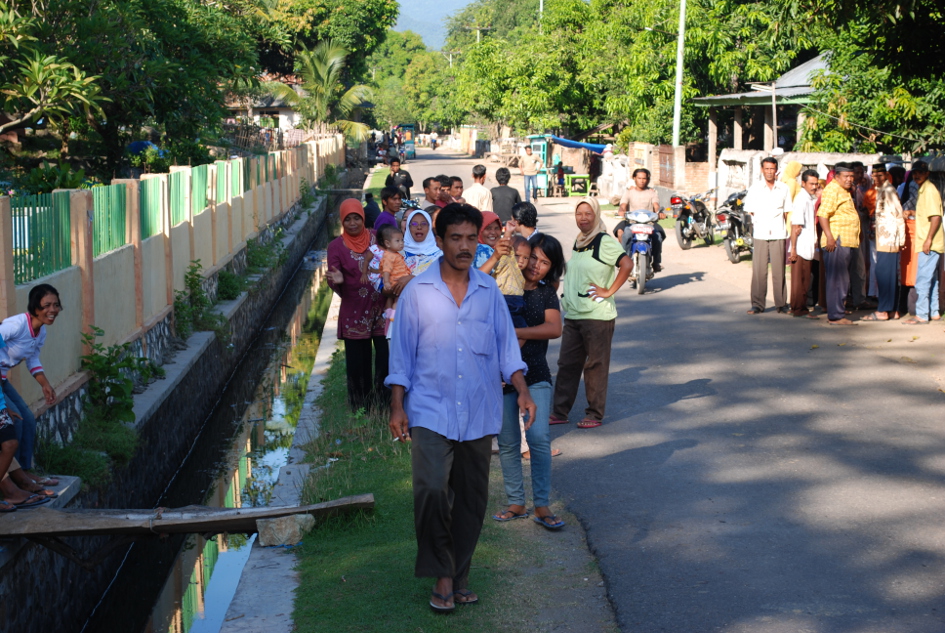 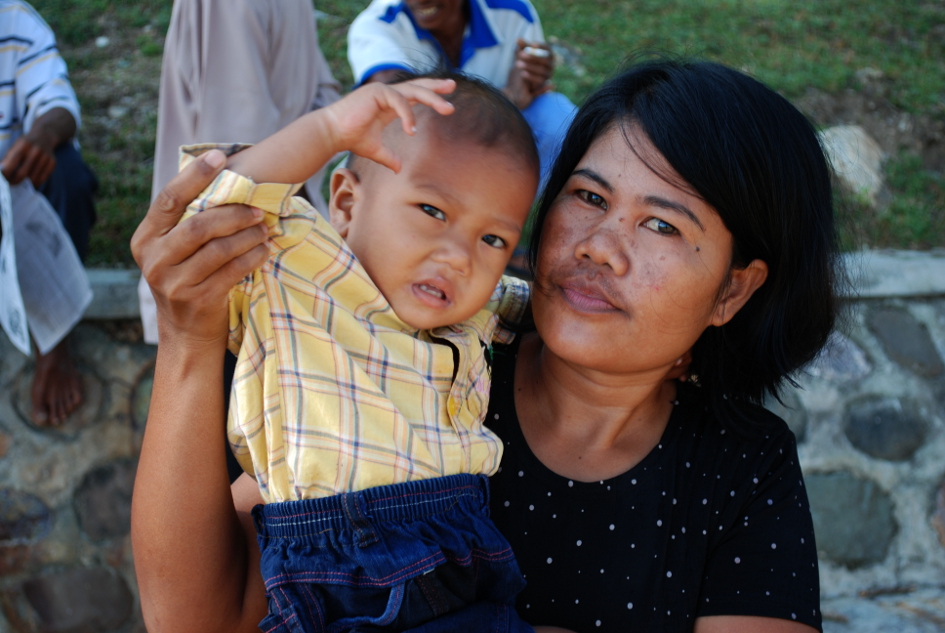 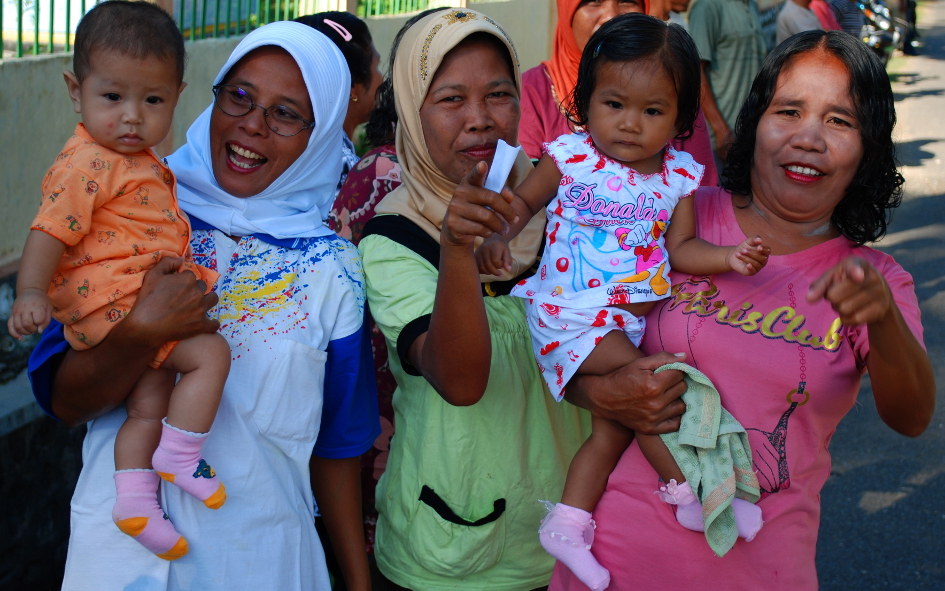 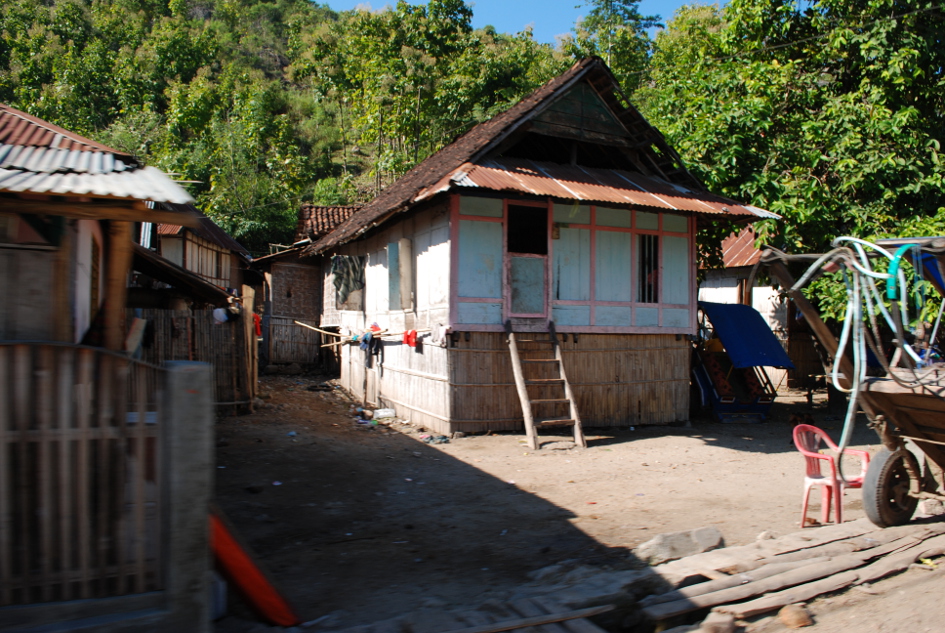 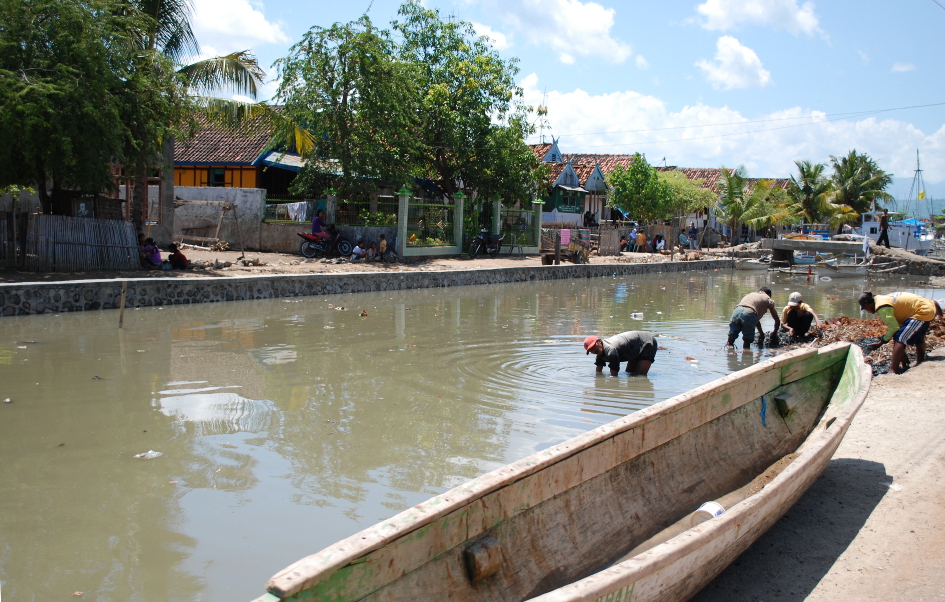 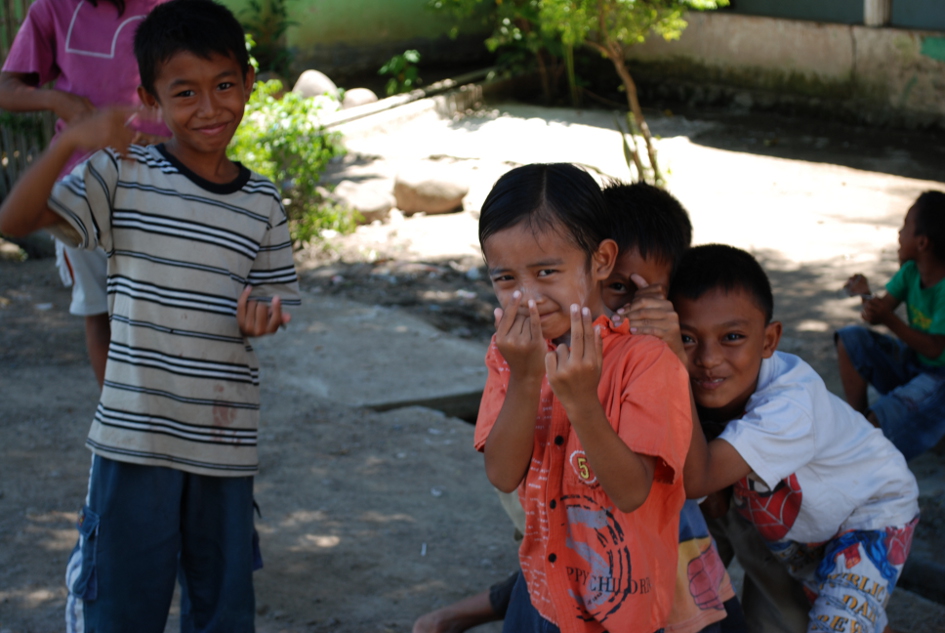 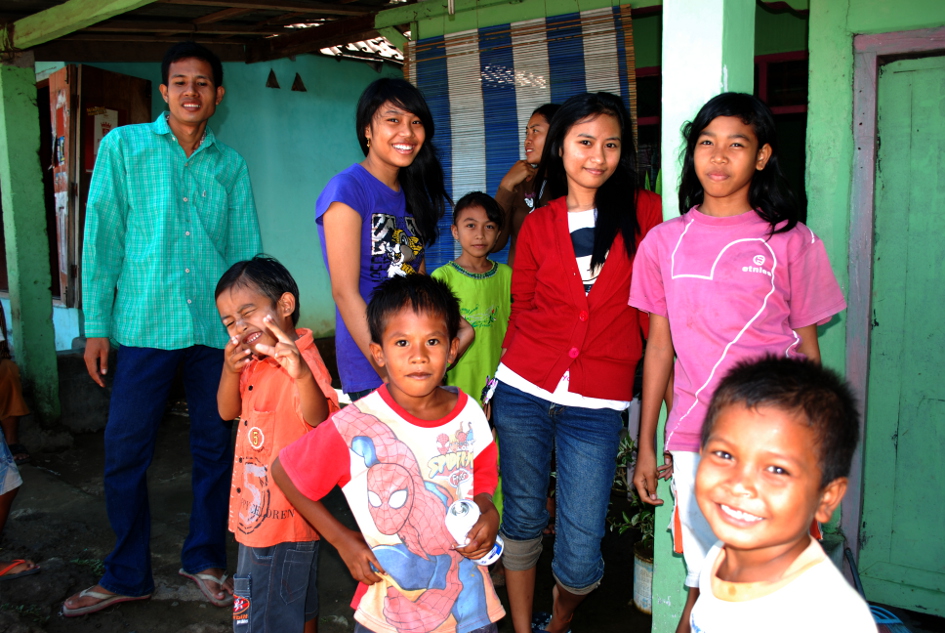 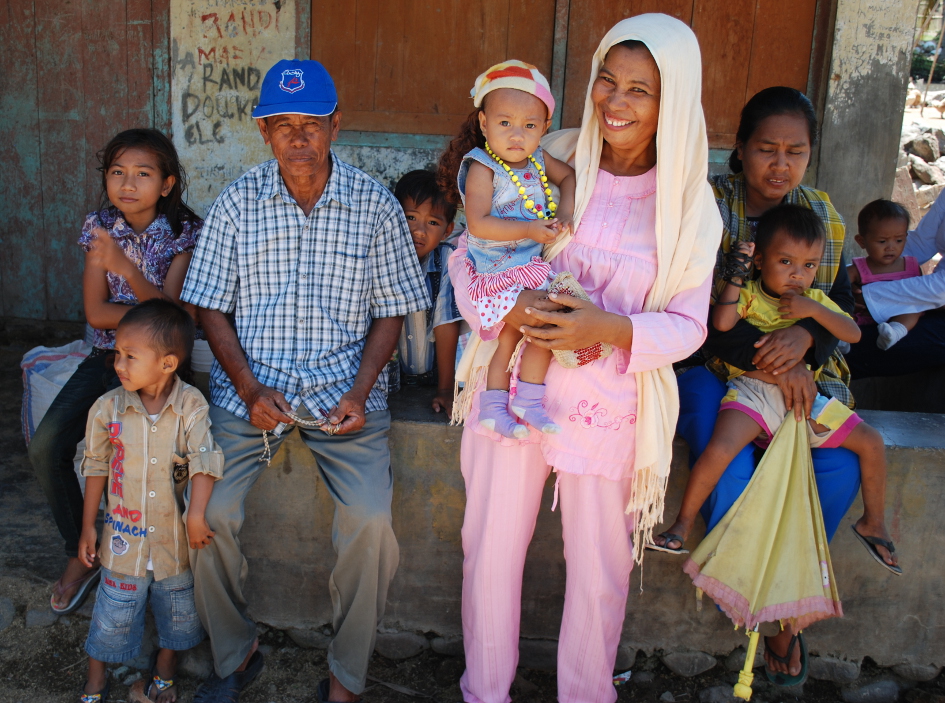 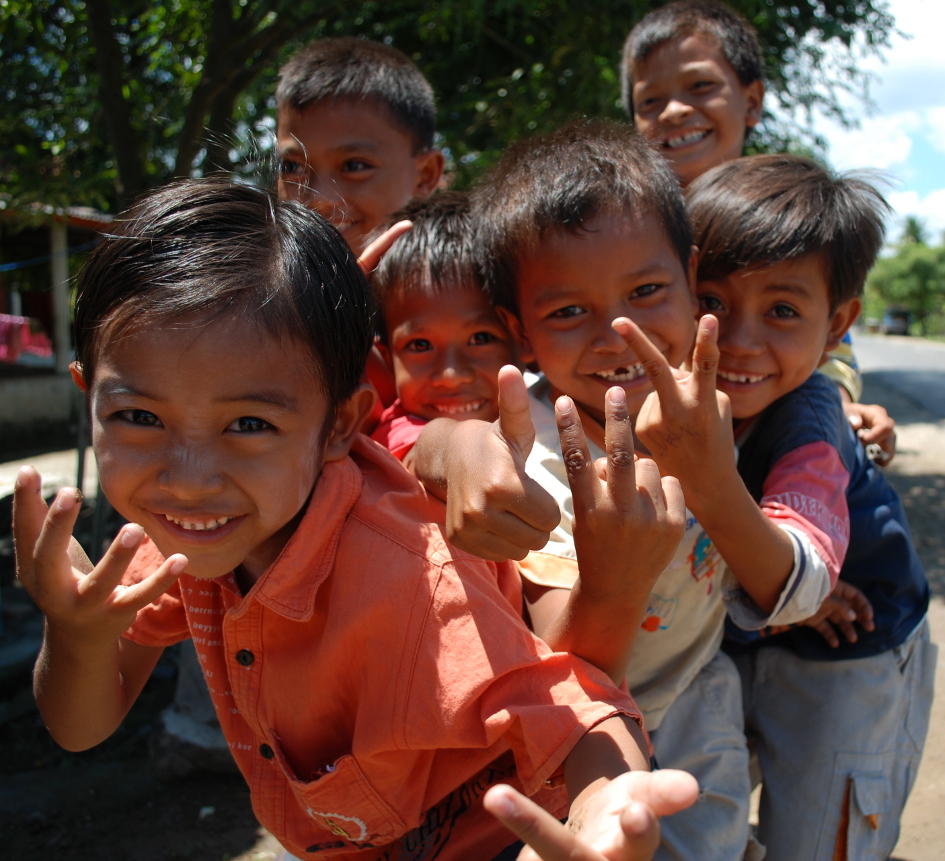 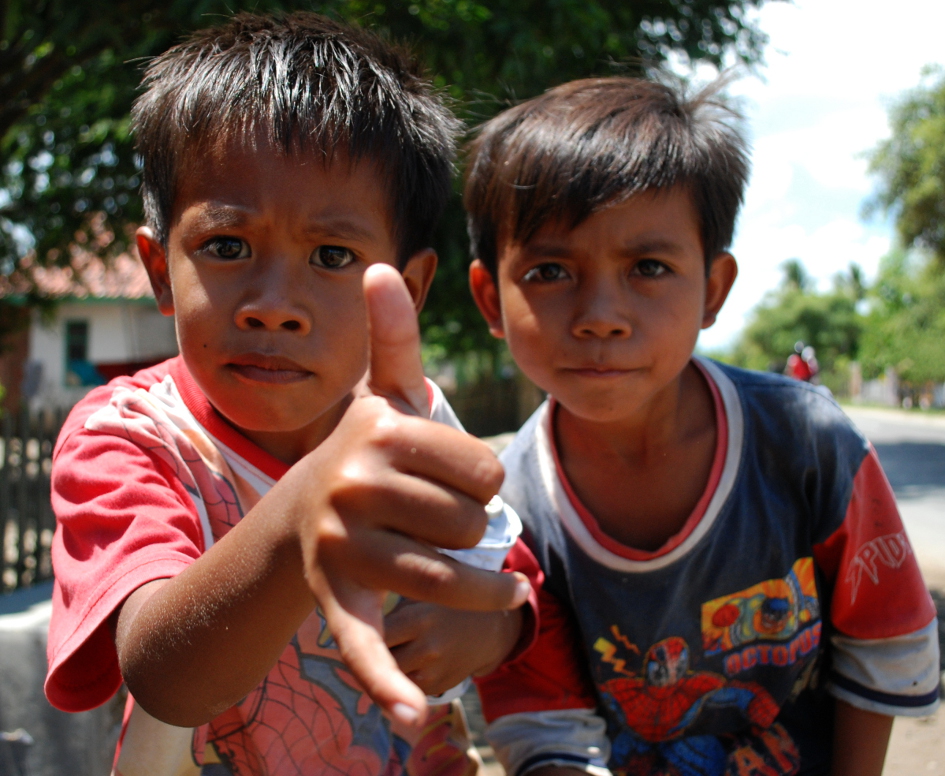 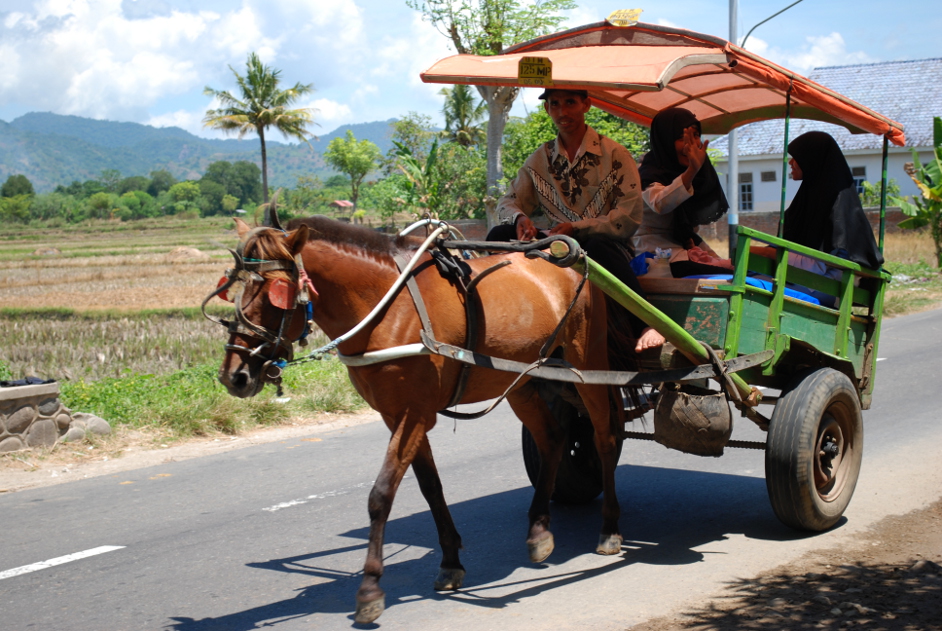 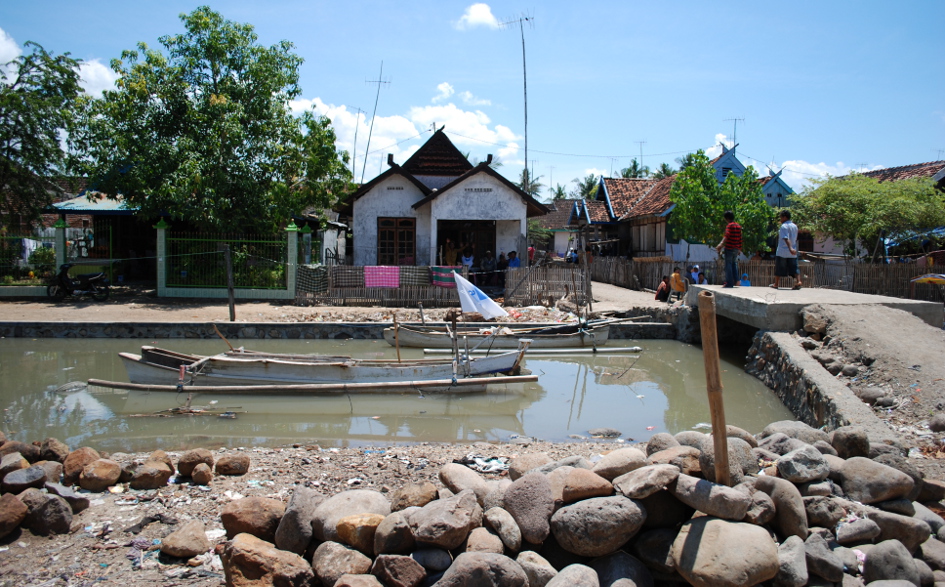 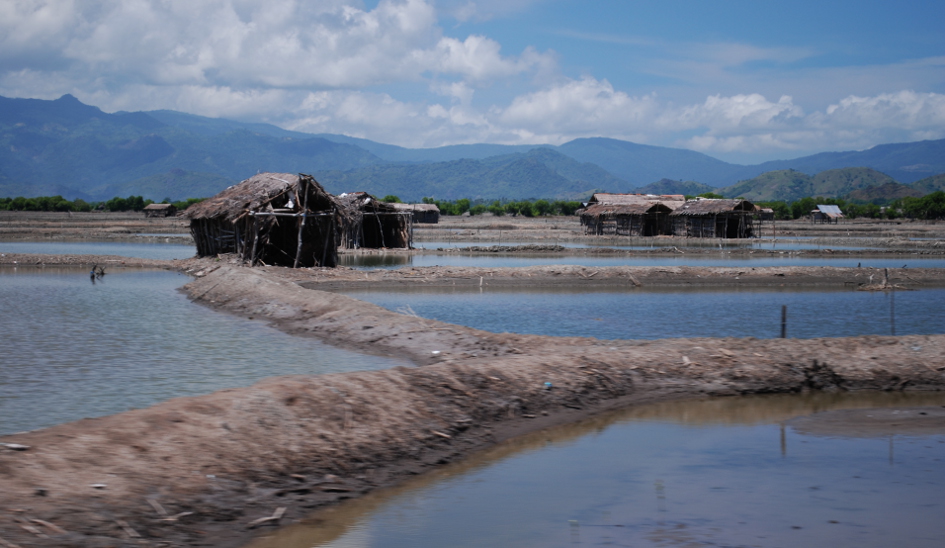 It was difficult to know how to act. Most the folks we visited were a bit embarrassed to show me where they lived because they assume (rightly so I suppose) I am accustomed to an elevated standard of living. And I have to admit that some of the homes were little more than corrugated tin and whatever scrap wood could be found. That is not to say that it was not neat and tidy. It certainly was but there was no escaping the reality of impoverishment. It was awkward. I felt ashamed that they felt ashamed but I am certainly thankful they invited me into their homes. It is not uncommon for folks in this situation to request a 'gift' or two. Nobody asked me for a thing.

It was an interesting time to be in Bima and probably the rest of Indonesia for that matter. It was election day and almost everything was closed so folks could hit the polls. While Imin’s uncle’s house  a family friend stopped by to have a chat. He was a smart fellow (I've already forgot his name) and spoke English quite well. It was he that gave me a bit of info about the elections. Apparently, they were voting for representatives for Parliament, both on the national and district level. It seems there are so many political parties and individual candidates many were justifiably confused by the ballots.

I am a stinking liar face. On occasion I’ve been telling people that I am a journalist on the theory that they may open up a bit more and possibly reveal aspects of their lives or culture to which I might not otherwise be exposed. Up until today little came of it. But upon hearing of my journalistic 'credentials' my new friend asked me to accompany him for a spin on his motorbike. He had something to show me.

Destination: Democracy. At the polling stations I continued to enjoy celebrity status becoming, quite literally, the center of attention soon after arriving. My guide explained the procedure. People from nearby villages come to the station, sign in, and then sit and wait for their name to be called over the loudspeaker. At that point they head to one of four small tables where they make their choice (I was shown one of the ballots). They then take their ballot to the appropriate box (there is a separate box for each election, four in all) and cast their vote. This is all done under a tent and all in the same area. Privacy is lacking although I believe it sufficient to encourage voting your conscience. I have no idea how fair or unfair it may be but my friend assured me that there was no coercion. I probably saw eight to ten stations over the course of the day and it did seem to be carried out well considering the circumstances. It appeared fairly civil and organized but what the hell do I know?

And talk about being the center of attention. I entered one of the polling tents, stood in the center, and began snapping pictures of the accoutrements of democracy. Folks loved it. They could not get enough. It appears that just about everyone who can vote does so. This, in point of fact, is why everything is closed. No excuses. Good to see the democratic process exciting the proletariat. Makes me all warm and fuzzy (maybe that was just a result of whatever the hell I ate the night before). 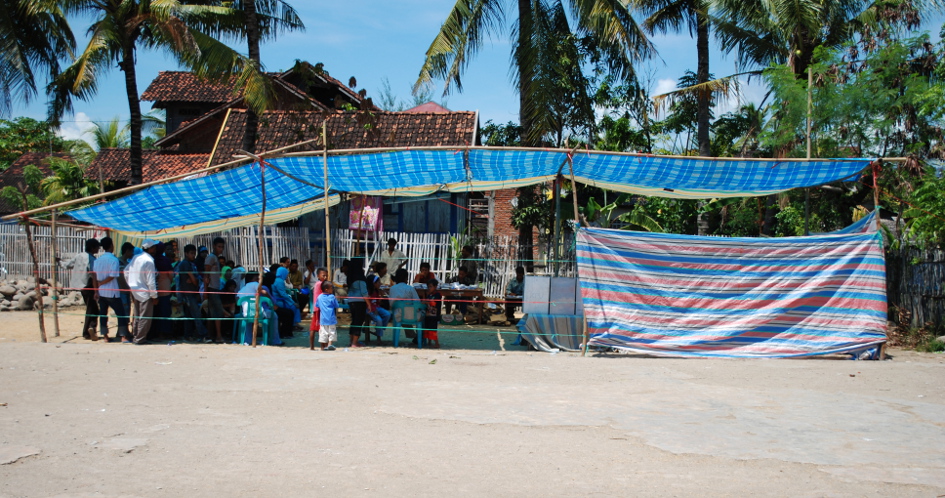 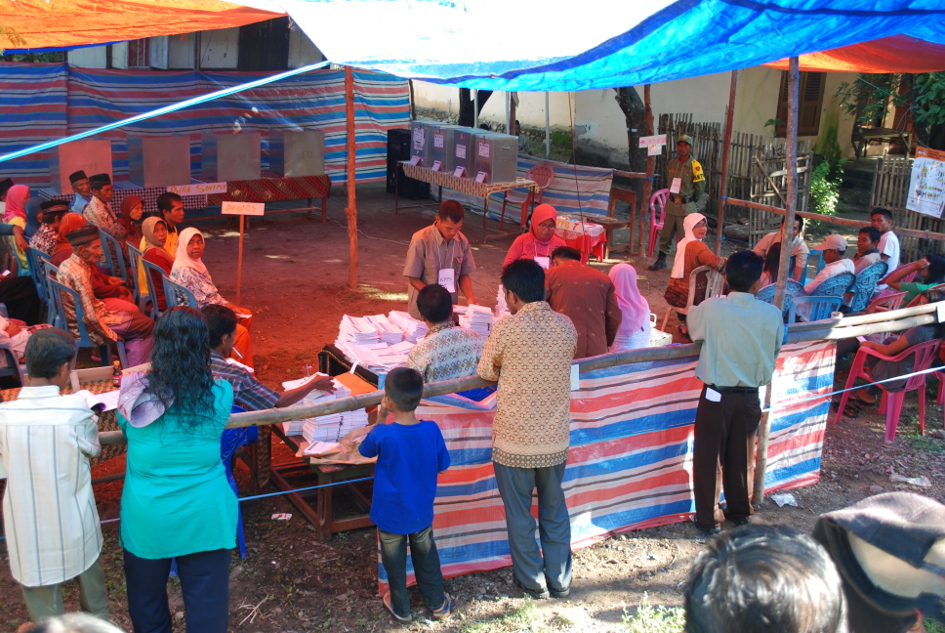 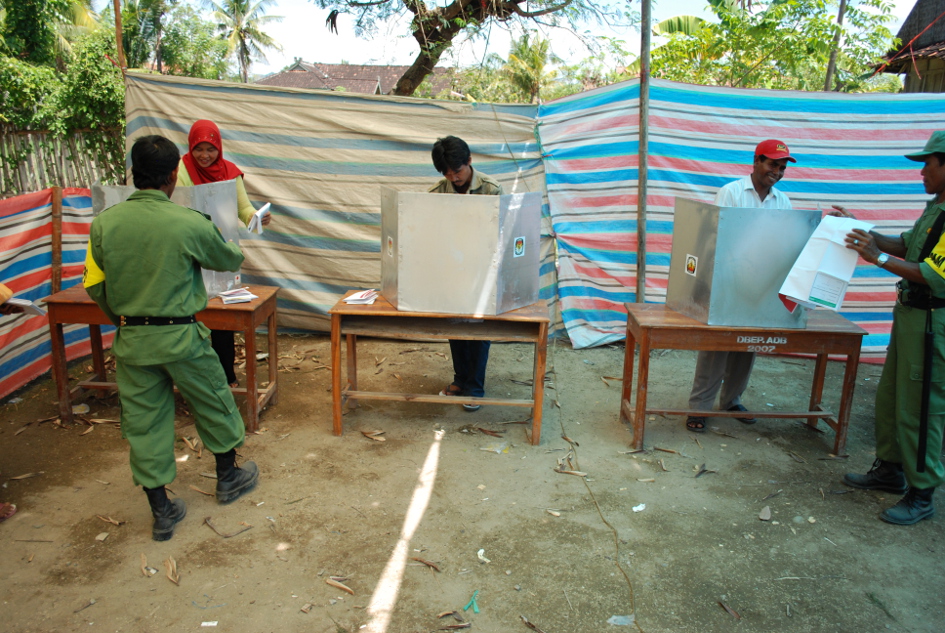 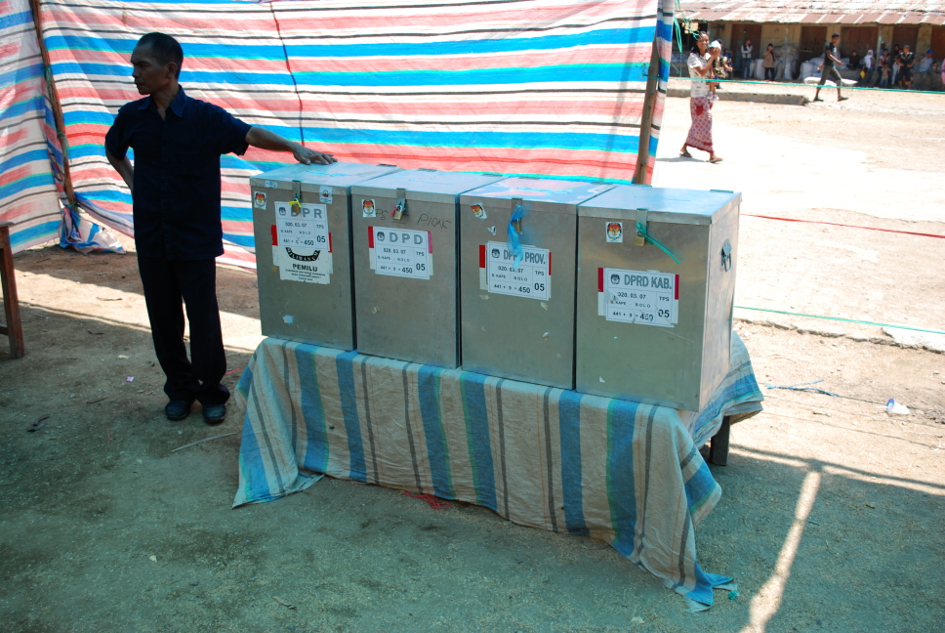 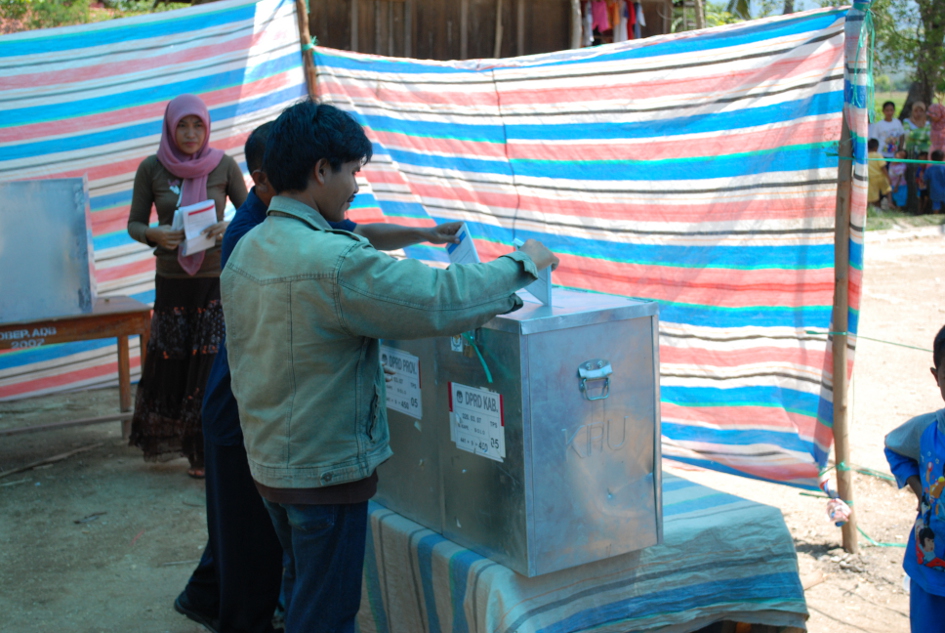 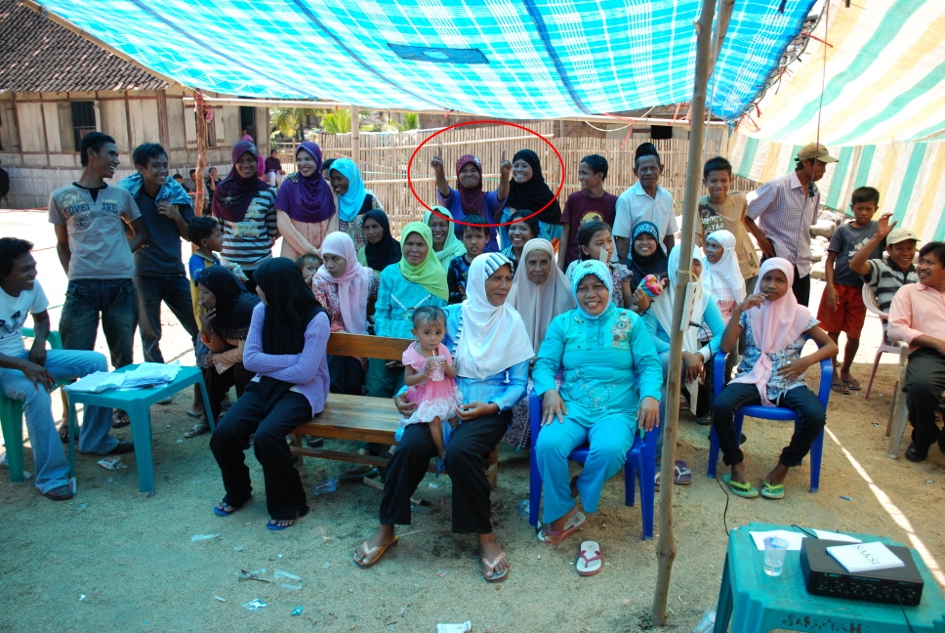 I am considering changing my name to ‘Hey Mister’ as this is the designation I receive from every single person I have met on this island. Even Imin did not get around to using my name. I hear it when I walk through the streets, as I am cruising along in my motorbike, while I am standing here or there, while I am eating at a restaurant, and in my dreams. It is quite entertaining. I wouldn't want it any other way.

It was great deal of fun meandering throughout the countryside while simultaneously promoting the journalist fantasy. At a glance there is nothing to see here but with a local connection it can be one of the best experiences you will ever have.

Imin is a little shaky behind the wheel. There were a few times I thought he might lose control but he held it together. This is good. I’ll save my third world hospital experience for another time and accident.

Lunch fell through. We were going to murder a chicken at Imin’s uncle’s house and have a bit of chicken satay. Unfortunately, a bird could not be procured on account of the election holiday. There is a chicken somewhere taking some extra breaths as a direct result of the people’s desire to exercise their civil duty. Lucky bird. I guess I will have to satisfy my morbid curiosity another way. Perhaps, I can halve a goat with my motorcycle.

Currently, I am in in the port town of Sape and will be here for the night awaiting the morning ferry to the island of Flores. It is a pretty ugly place. Some might deem it a shithole. I won’t go quite that far although my hotel may fit the description. From Flores I will arrange a trip to Komodo Island and fulfill my dragon quest fantasy. 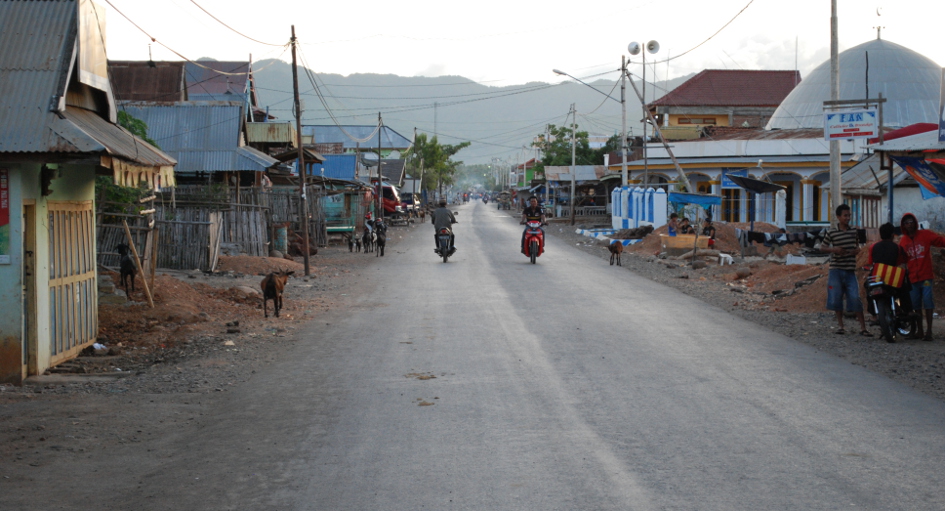 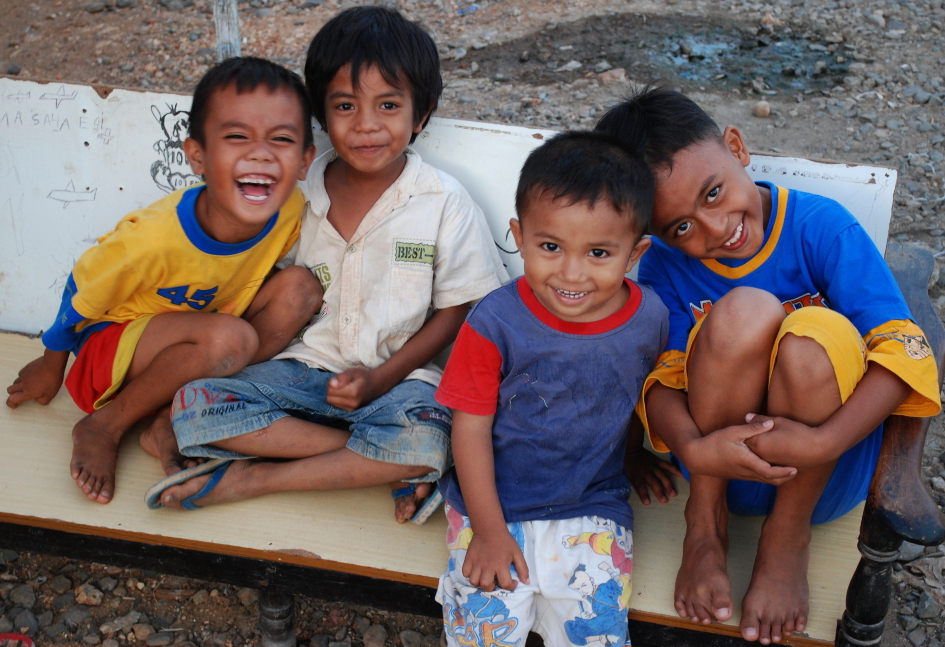 Casualty List: Wristwatch (fell off while riding motorcycle), Winchester multi-tool (was stolen from bag at hotel), metal water bottle and holder (also fell off bike), cleaning cloth for camera (the clip somehow unclipped itself and bailed), one hundred dollar US bill (I had it rolled tight and sequestered in a pair of shorts in case of emergency. Handed shorts to laundry and forgot to remove. Made someone very happy), three twenty dollar bills (had them wrapped together and hidden in beltloop on shorts. Was dislodged and fell on the ground somewhere), and a bit of self-pride (I lose it every time I attempt to speak Indonesian).
Posted by Rich at 11:17 AM