Under The Red Umbrella (Singapore)

February 12th, 2009 - I 've been in Singapore for the last day and a half although it seems much much longer. Staying up for 36 hours tends to have that effect. I am really only here to get a longer visa so I can avoid a legally suspect monthly renewal in Bali. This one will be good for two months and will be renewable each month for another four. Yippee.


I am staying in a hostel for about $15 a night and, as you might expect, you get what you pay for. Dorm rooms, shared bathrooms (as in males and females), small toilets (taking a shit is nothing short of a circus performance), air con only at night, and usually a crowd in the kitchen area. It could be worse and it is only for a short time. The real positive is that you get to meet many people you would not normally meet. Last night I tossed a few drinks back with an American teaching English in Borneo and an Irish lad on his way to work in Australia. Can't find that at the Sheraton.


I did manage to get my visa in a cloak and dagger-esque fashion. I had to meet my 'guy' under the red umbrella at the MacDonalds next to the Hilton. Sounds shady but I guess it is legit (Author's note: Not really). At least he wasn't wearing a trench coat and carrying a briefcase. I suppose an office is just too much overhead, especially in a city as expensive as Singapore. That and what do you need an office for when you merely need to bribe the folks at the Indonesian Embassy and meet some dipshit willing to pay twice the price under the red umbrella at MacDonalds? I am that dipshit. However, keep in mind that when you factor in the normal three to five day waiting period at the embassy and lodging it works out about right. They know this. Wily.


Ever heard of Doctor Fish Therapy? You have now. Basically, you stick your feet in a fish tank with hundreds of small fish and let them eat and suck the dry skin off your feet. The American I ran into told me he saw it in one of the malls here and gave it a try. At only ten dollars for ten minutes you'd be an asshole not to, right? It felt like a hundred tiny mouths nibbling and suckling on my feet. It does tickle a bit but all and all it is not too bad. The fish is the Garra ruffa (good name for a child) and they hail from Turkey. Next time I'll go naked. 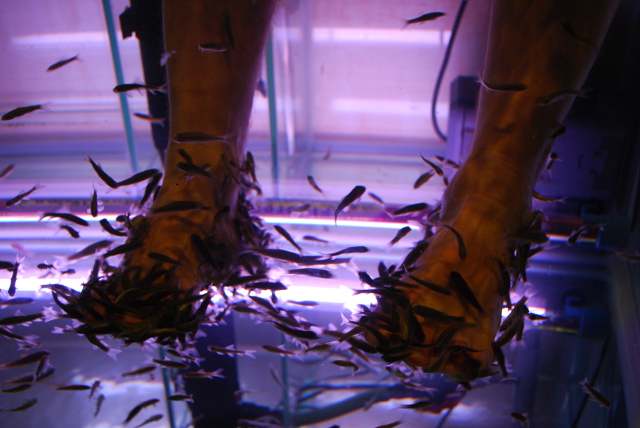 As I was walking down the street I was approached by a young woman who asked me if I'd ever done any modeling. I replied in the negative but thought to myself that maybe it is about time I unveiled myself to the world. She gave me a card and told me to stop by the office. Now normally I would just brush this off but it was so random I had to at least check it out.

When I arrived at the office I met another gentleman (Swedish) who had been approached as well. He was much prettier than I (if you can believe it). Luckily, he went in first because when he came out from behind the red curtain he relayed to me that it was basically an attempt to get you to spend five hundred dollars on a portfolio. I did not wait for my turn. I'll make my own fucking portfolio.

I thought this was my big break (sniffle). I thought I was going to see my sublime image on a big billboard extolling the virtues of Calvin Kline underwear (double sniffle). I thought woman would adore me and men would envy me. I thought wrong. My ego was crushed, hopes dashed, and self-image tarnished. Damn it!!

Two of my favorite signs I passed along the streets of Singapore. Hard to believe chewing gum is outlawed here. Huh. 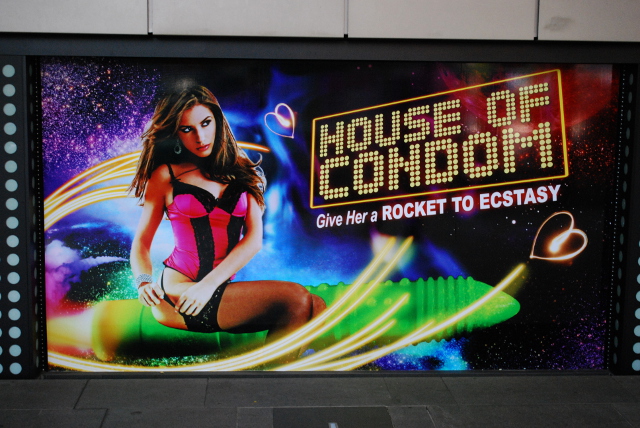