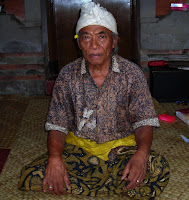 Feb 9th, 2009 - Not all that much too report over the last few days. I have been basically planning my next move while flirting heavily with a possible motorcycle purchase. I came close to buying one but after doing research on the internet have decided against that particular bike. Apparently, there are reliability and safety issues. Sooo…no thanks. I may still opt for a brand new Honda Tiger. Grrrrrrrrrrr!! This is a popular Indonesian model. It is only 200cc so my pants will most certainly not catch on fire. However, that is about all the power you need here. Anything more is a waste.

Today had an interesting turn. I met a fellow by the name of Ketut Liyer. He is a Balinese medicine man, painter, woodcarver, and fortune teller (among other things). If any of you have read Eat, Pray, Love by Elizabeth Gilbert then you’ve been introduced to him before. In the Bali phase of her ‘one woman search for everything’ she spent a great deal of time with this gentleman and wrote about him in her book. She did a rather impeccable job of describing him, most notably in her comparison to Yoda. His resemblance to the little green sage is eerie, both physically and in regards to his mannerisms. The only thing lacking is the signature reversal of sentence order indicative of the Jedi master.

When I arrived at his family compound (traditional Balinese setup) he was busy with some other clients. While I waited I looked over some of the paintings and carvings on display. I was a bit hesitant to just drop in. From what Elizabeth wrote in her book and what I was told by some locals and fellow travelers he is a famous healer in Bali. People come from all over to seek his counsel. So here I am showing up unannounced in hopes of an ad-hoc palm reading. A woman staying at my hotel told me that when she went it was set up by a friend and that she wore a sarong, brought a traditional offering, and even purchased one of his paintings. I guess I hoped that just the mere presence the Exalted Goofy One (that would be me) would be sufficient. Thankfully, I was not expelled. By this time he had achieved a degree of fame due to the book so apparently he was accustomed to folks dropping by randomly.

After a while I decided to move closer and was ushered on by a local sitting nearby. I only sat for a moment before Ketut himself beckoned me closer. At the time there was another foreigner present (American or Canadian I think). She had been sitting next to him patiently while he finished up with his other clients. I was a bit surprised that he asked me to come sit next to him while he was with someone else and even more surprised when he asked her if she minded if I was there while he did her reading. She did not object and even seemed to relish the idea a bit. It was a tad surreal. I had just read a book where this guy had a starring role and now here I am sitting next to him while he reads this woman’s fortune. Strangely enough this woman, having read the book herself and remembering Ketut, did not realize that this was the Ketut from the book. She had been referred to him by a Balinese guide (as I said he is famous in Bali). Talk about a coincidence. When I arrived Ketut asked me how I knew him. Only after I mentioned Elizabeth’s book did the woman realize who he was.

Before he read her fortune he had a few questions. He pulled out his guestbook (he has all foreigners sign his book) and turned to a page where a woman had left her information and punctuated it with a lipstick imprint. He pointed to this and asked, What dis mean? She did her best to explain but Ketut went through more pages and pointed out other lipstick smudges all the while repeating, Why kiss book? Why not kiss Ketut? That had me giggling for quite a while.

After she was finished I moved closer and took my place by his side. Before he began he had a question for me as well. He reached for his copy of Eat, Pray, Love and began thumbing through the pages. When he arrived at the section he was searching for he pointed to a couple of paragraphs and asked, What dis mean?  As I began reading I realized this is where the author introduces Ketut and where she makes the comparison to Yoda.  How the hell do I explain Yoda?  It’s from a famous movie . . . ummmm . . .called Star Wars. Yoda is a wise, intelligent, wise, intelligent . . . ummm . . .teacher. He--- Ketut then interrupts with, Is handsome?  Have I ever mentioned how smooth I am? So I coolly reply, Ummmm….well…ummmm….ahhhhhh….ummmmm…he is wise, intelligent, wise, intelligent person…..but from other planet….umm..not human…but wise, intelligent….umm Elizabeth is saying that you are very wise and intelligent. Smooth. Reeeeal smooth. Excellent recovery.

Luckily, he decided to move on. Before he began the palm reading he gave a disclaimer of sorts. He discussed good karma, bad karma and that he is compelled to tell the truth. He recalled how one time he looked at a gentleman and told him he had bad karma. He get very angry and say he kick me in neck to kill me. I scared and I run away. As it turns out I have 'very good karma'. Damn right I do. His recognition of my cosmic alignment prevented me from getting violent and thrashing yet another fortune teller.

After we were finished he asked if I wanted to take a picture which, of course, I did. I took the first shot but when I showed it to him he reacted with, Uhhhhh! I ugly! He then buttoned up his shirt and had me take another shot (see before and after below). He was only marginally more pleased with the second picture. He asked me to mail him the photo and I agreed. I said goodbye and was on my way. As I was driving back to my hotel I realized I could get the photo printed in town at a Kodak shop. I did so and returned to Ketut’s family compound about an hour and a half later with the picture. When I entered he was talking to a pretty young woman (He is rather fond of the ladies). He did see me but when I approached there was absolutely no look of recognition in his eyes whatsoever. It was as if we had never met. That threw me a bit. I then showed him the photo. He took it from my hand and replied, Uhhhhh! I ugly! The young woman, feeling a little sorry for Ketut, tried to assuage him by saying, ‘Noooooo. Nooooo. You’re not ugly. Ahhhhhh.” I just stood there with a vacuous stupefied grin. Feeling a little ashamed about his reaction to my act of kindness he snapped out of his melancholic trance set in motion by the reality of his visage and thanked me.  Yup, that story is just about right for me.

As a side note I met a gay gentleman who had visited Ketut a couple years before me. He apparently received the same reading. Darn. There goes my Willard Scott highlight, my beautiful supermodel wife, my appearance on Conan O’Brien, and my summer house in the Hamptons. It was fun while it lasted.