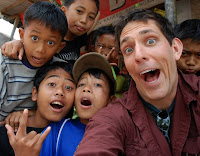 Feb 15th, 2009 - So yesterday I went to a cremation ceremony ..... sort of. It was more like a pregame warm up. In the end the only thing cremated was my ambition to watch a cremation ceremony. Before the ceremony I met my friend Ketut again. He not only informed about the ceremony but offered to accompany me.I arrived at his house for a bit of lunch and coffee before our departure. Unfortunately, I was subjected to a smidgeon of financial pressure.

He wanted me to purchase some of his wood carvings, an issue he'd brought up more than once. Like before I told him I'd prefer to do so before I left Indonesia so I could avoid lugging them around. He claimed to understand but proceeded to present me with seven small carvings that had been sanded and stained, clearly for my benefit alone. He understood that I could not take them until I left Indonesia for good but he was hoping I could pay for them then and come get them when I was ready to leave.

He told me that his wife had done the work and was hoping for some compensation (The chorus to Queen's "Under Pressure" suddenly began resonating inside my head). He then informs me that his wife needs an operation, shows me an ultrasound image, and tells me the cost of the operation is five million rupiahs (around $440 US). Pressure pushing down on me, Pressing down on you no man ask for, Under pressure - that burns a building down, Splits a family in two, Puts people on streets............


This was a bit disheartening. I would like to think I am not a heartless prick caaaaaause the fact is there is no way to tell if he is being straight with me. If I was certain I would not be against giving him the entire amount. One of the biggest problems with donating to charity is the lack of oversight over what actually happens to your donation. The Ketut scenario is one where you could see your money in action....theoretically. Then again, there is no way for me to know for sure if the story is accurate. I suppose I could have insisted on accompanying them to the doctor but for all I know the doc could be in on it as well. Fiddlesticks. I decided to resist for the time being and see if he continued to push. I despise testing a poor man's resolve but it felt like the only way to determine if the situation was legitimate or if I was being targeted.

We left for the ceremony at 12 pm. At 5:30 pm I returned to my hotel because it still had not commenced. Well, I should say the climax had not actually started. Mornings and afternoons are spent cleansing the body, making offerings, and reciting prayers. Interestingly the prayers are recited over a loud speaker (from the deceased's house I believe) throughout the day. Apparently, the duty is shared by two individuals who take turns all day. They have food and drinks by their side so they need not leave. I was told (after the fact) that I could have walked down to the house and viewed some of this activity. I later discovered that another foreigner was at the house. You'd think Ketut would have mentioned this at some point. He spent most of his time down the road at a small food stall chilling with his homies. I suppose it is possible he was a bit miffed at my donation hesitation. Not sure.

So what was I doing? Well, I was hanging out at the other food stall about 200 feet down the road. Waiting and waiting and waiting and waiting. My guide says, "if you want walk around it ok". Sure. Unbeknonst to me that was his way of telling me I could check out the deceased in person and witness the preparation ritual. So I sat on my pooper waiting for the procession from the home to the cemetery to begin. Can you blame me? The concept of gawking at a dead body on his/her funeral day is not something to which I am accustomed. Guess I needed a chaperone to make it feel permissible.

As it turns out this part of the day was still rewarding as I chatted with the locals, worked on my Indonesian, and played around with the local children. The kids (or should I say mini prima donnas) were having a field day posing for the camera. 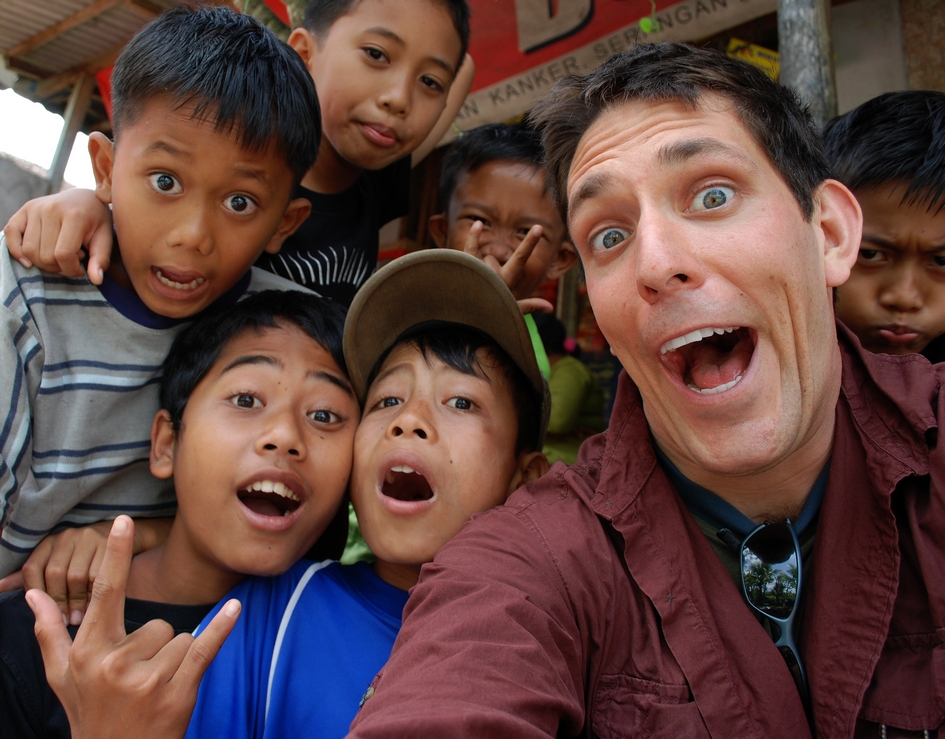 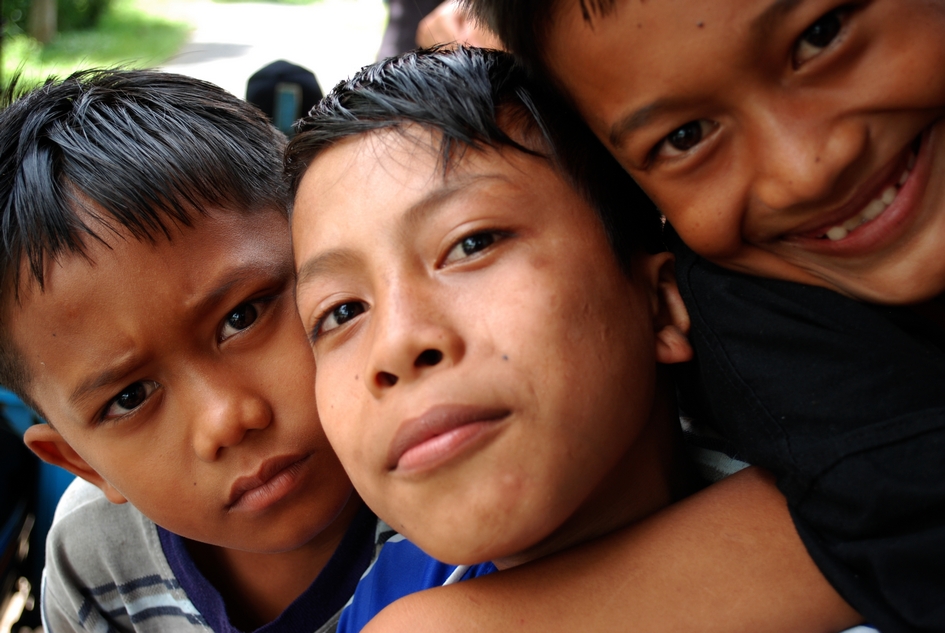 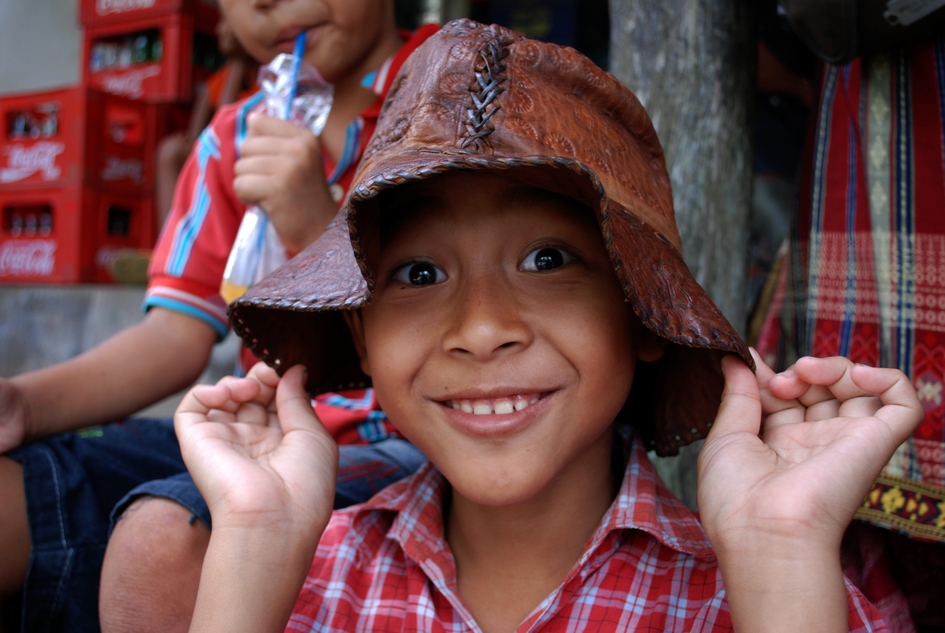 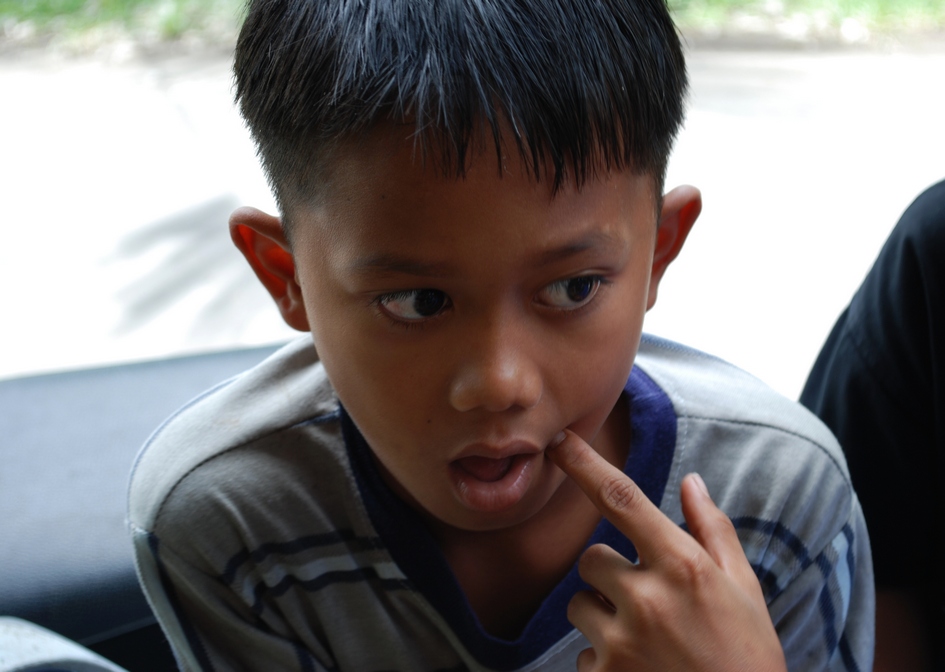 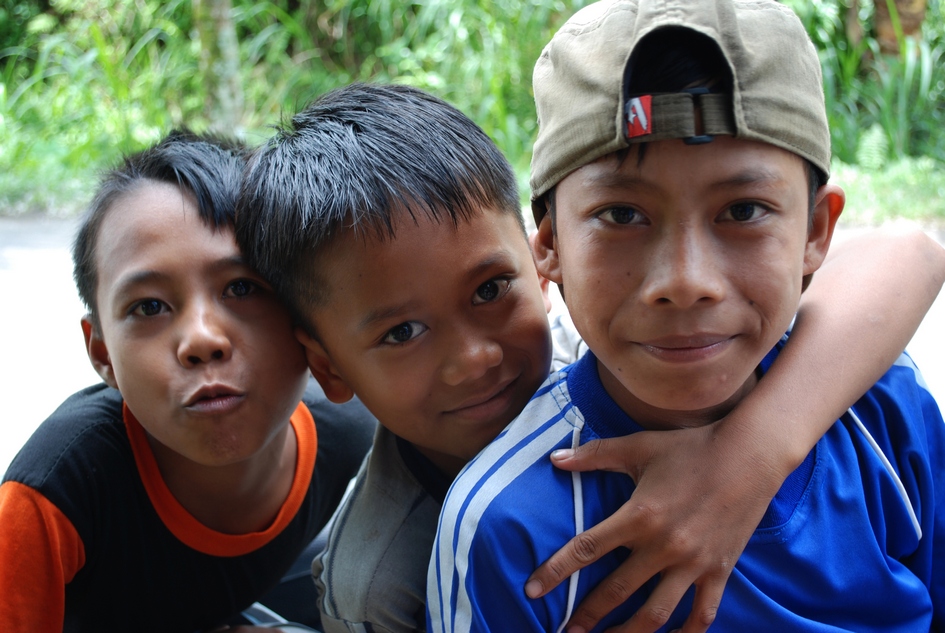 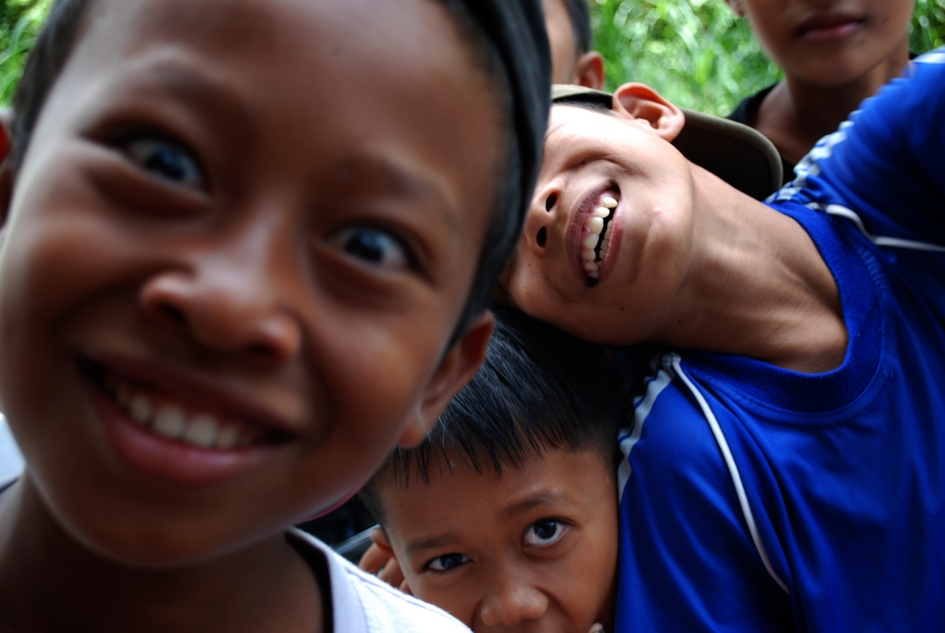 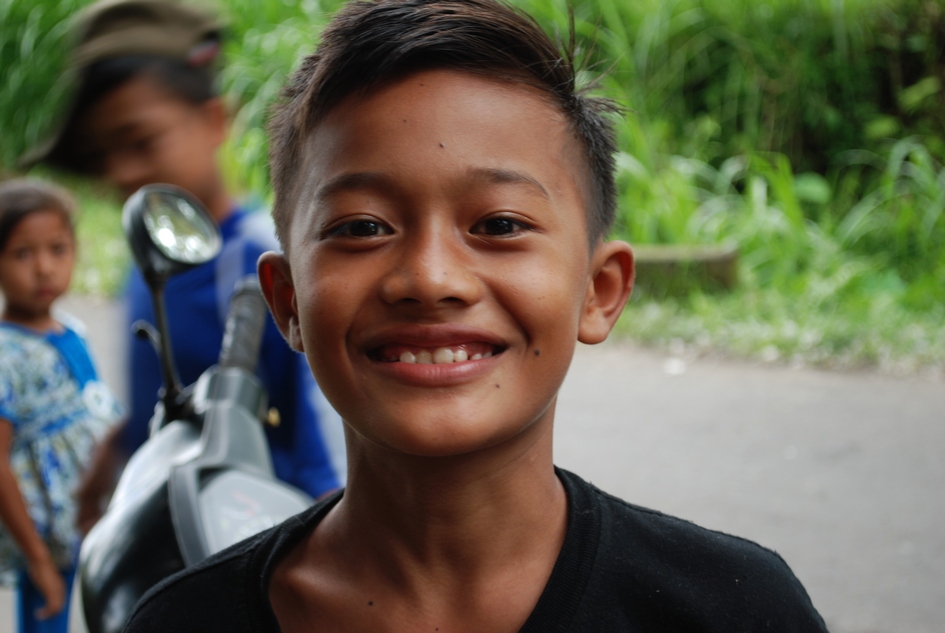 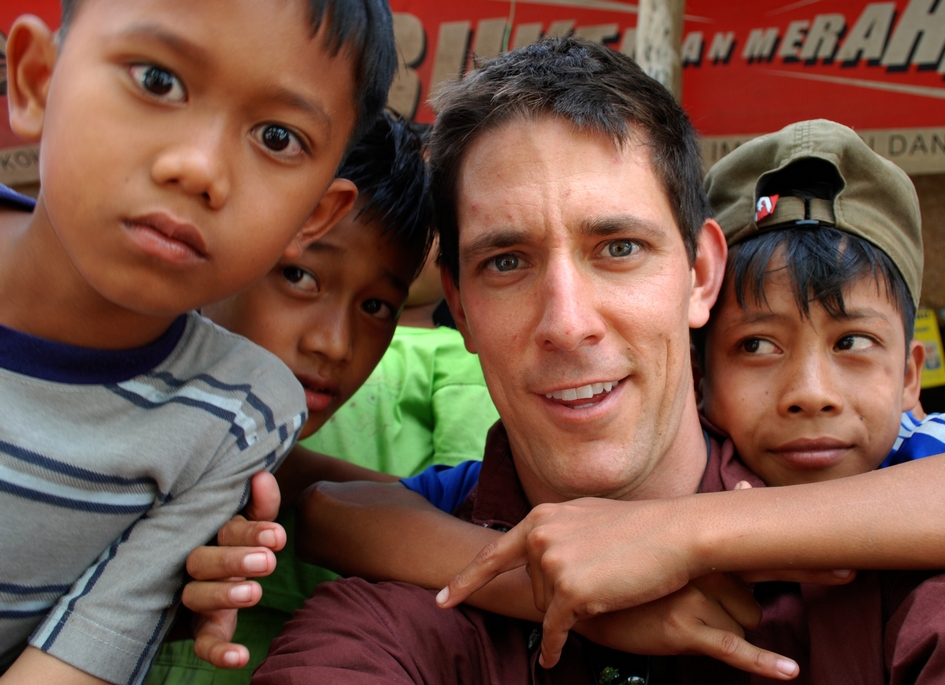 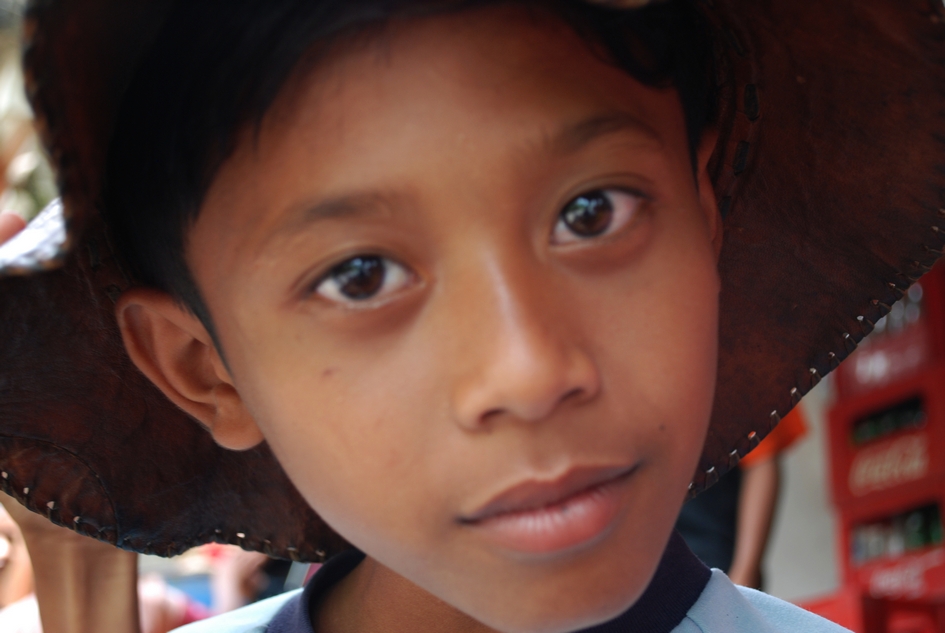 I saw some things that were mildly unsettling. As I may have mentioned it can get quite balmy in Bali. Well, at one point a group of children decided to go for a refreshing swim. Their 'pool' was an irrigation/drainage ditch along the road adjacent to a rice field. Nothing like spending part of an afternoon watching nude boys splash around in preposterously filthy water. I would have to say the 'highlight' was watching one of the kids squat in the ditch and take a relaxing poo-poo. At first I was unsure of his intention but the customary grimace on his face gave me all the verification I needed. Another boy decided it was game time so he grabbed a coconut and fired it in the vicinity of the young defacater. I believe he was actually attempting to sink the floating turd submarine as it emerged from the depths. I half expected the other boy to exclaim, "You sank my battleship!!!"

I also witnessed a grown man strip down naked and take a bath in the same ditch (no sign of the 'submarine' at this point). One might wonder as to why I would linger but it is one of those instances where you just can't look away. Morbid fascination and a trance-inducing astonishment compelled me to observe.

How do I feel at a time like that? Ambivalent. What other choice do they have, really? That is life. That is their life. You either let it get you down or have a giggle. I went the giggle route.

When I was not watching 'Fecal Battleship' I was sitting in front of the food stall sipping coffee and eating chicken ball soup (Bakso Ayam). Have I mentioned Balinese coffee? One word: tar. Very strong tar. I believe you could use it to restart someone's heart. And I love it. Love it.

While I waited I took a stroll into the cemetery to see the accoutrements of cremation. Two people were being buried that day, both from well off families of higher castes. Those with the means are usually buried within a month of death. The exact date depends on local customs and traditions. It involves some sort of wise man from the village consulting a book and calender in order to determine the most favorable burial day. The less fortunate are first buried in the ground for three to five years and cremated only as part of a larger ceremony along with the corpses of other lower income families, a literal 'dead pooling' of money.

After that I sat. And waited. And chatted. And waited. Then I waited some more. Even the locals were not sure about the hold up. All this time the two individuals continued to sing and recite prayers over the loud speaker. One local suggested that perhaps the family was feeling extra guilty and needed to compensate with a extra helping of mournful passion.

At this point I am tired, hungry, and a bit irritable. These are not suitable emotions for this type of event, an event that is actually a joyous celebration in Balinese culture. I felt I was not in the proper frame of mind for the occasion so I chose to leave and maybe see one at a later date. I did not want to find myself thinking, Can't ya just light the old bastard so I can get a picture already?!! Not cool.

Below is a clip I found on the internet depicting the typical cremation ceremony for an individual of high status.