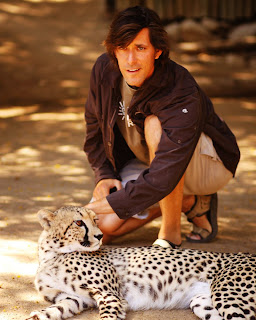 April 11th, 2011 (January 2011) – After Storms River we made our way along the coast, hung a right at George and headed north to the city of Oudtshoorn, the ostrich capital of the world. This title is well-deserved as ostrich farms are everywhere.  As you might imagine it is possible to purchase just about any part of ostrich anatomy for consumption (ostrich meat is delicious) or otherwise (need a feather duster?). We found a rather pleasant caravan park in which to plop our tent operated by an exceedingly friendly older gentleman that was more than happy to tell us about the area. I find that friendly people in the hospitality industry (in any country) are becoming scarce. Oh, the irony.

The next morning was, in a word, ridiculous. I have no excuse. We showed up at the Cango Wildlife Ranch to experience the thrill of our very own ‘Wild Encounter.’ If you see me on the street please kick my ass. No signal. No warning. Just sneak up on me commando style and punish me. I deserve it. Can’t really blame Leslie on this one. My idea. My shame.

I’d read that you can spend time playing with cheetahs, tigers, lions, and even cage dive with crocs. I knew the potential for cheesiness was high but I could not resist the urge to touch these majestic furballs. Let’s be honest, they are f***ing cool! Me on the other hand….So when I read about Cango I thought it might be worth a shot. They created a Cheetah Preservation Foundation in 1988 and seemed to have their shit together. The big cats on hand have all been rescued and would not survive in the wild. However, the cheetahs kept in the preserve (away from the public) are often rehabilitated and released. Of course I knew the place was a glorified zoo but I still thought spending a few moments up close with animals that never cease to inspire would make everything tolerable. Wish in one hand. Shit in other.

Upon arrival we decided to suck it up and listen to the guided spiel. When in Rome. There was only a small group of adults present for our ‘jungle’ tour. No children. You’d think without the presence of younglings our guide would skip the ‘Welcome to the long lost city of Bullshitusdonavia where you will discover strange and wonderful beasts’ routine. Nope. I’ll give her credit. She managed to pull it off with a straight face. The same cannot be said for me. I wanted to tell her she could spare us but resistance was futile. Besides, she was new and clearly wanted to nail it.

We did see some interesting animals (pigmy hippos, lemurs, crocodiles, white lions, white tigers, rare bush pigs, meerkats, etc.) but I’ve never been a fan of zoos. I realize that in many ways they are vital and necessary as teaching instruments but no matter how you slice it wild animals should always be in the wild. It is as simple as that.

I had a sinking feeling about our ‘encounter’ but decided to go for it anyway. And if you are going to go for it you might as well go all in. We paid for the cheetah and baby white tiger experience. First to the cheetahs. I’d assumed that these encounters would be conducted by experienced trainers or wildlife experts, as opposed to, say, teenagers. And what happens when you assume?

I barely remember what occurred. I do recall lots of stress, not from being around the animals but from the high intensity quasi-photo shoot that ensued. While I was attempting to acquaint myself with Chester Cheetah the chaperones (i.e. children with authority) kept urging me to smile, look up, look here, and the like while snapping photos with two different cameras (one of them mine).

Chester started licking my hand but apparently this is like flirting with death as the action was summarily quashed by Johnny Teenager. Snap. Click. Smile. Get the f*** out! Awesome. I do remember stroking Chester and discovering his entire body reverberating from robust purring.  And their eyes are absolutely spellbinding. So big. So alluring. It makes you want to just curl up and take a nap with the furry bastards.  The aura was dispelled just a tad when I watched them devouring raw donkey meat. Breakfast of champions. 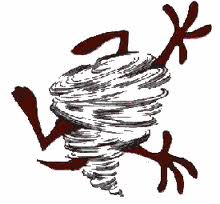 We were then shuffled off to the white tiger cubs where we repeated the identical, rushed Tasmania Devil-like experience. After it was over it took a moment to emerge from the fog. One hundred dollars well spent. We did get free printed photos to relive our ‘Wiiiiild Encounter…..Grrrrrrrrrrrr’ for many years to come. It actually could have been incredible. I blame myself as I should have stood up and screamed, ‘Alright kids! Cut the shit! I don’t give a rat’s ass about photos so knock it off! I just want to sit here and pet these magnificent muther f***ing kitties while savoring the moment. I signed a release so let them tear my face off if they want!!!! I’m not four! I’m a big boy! F*** off!’ 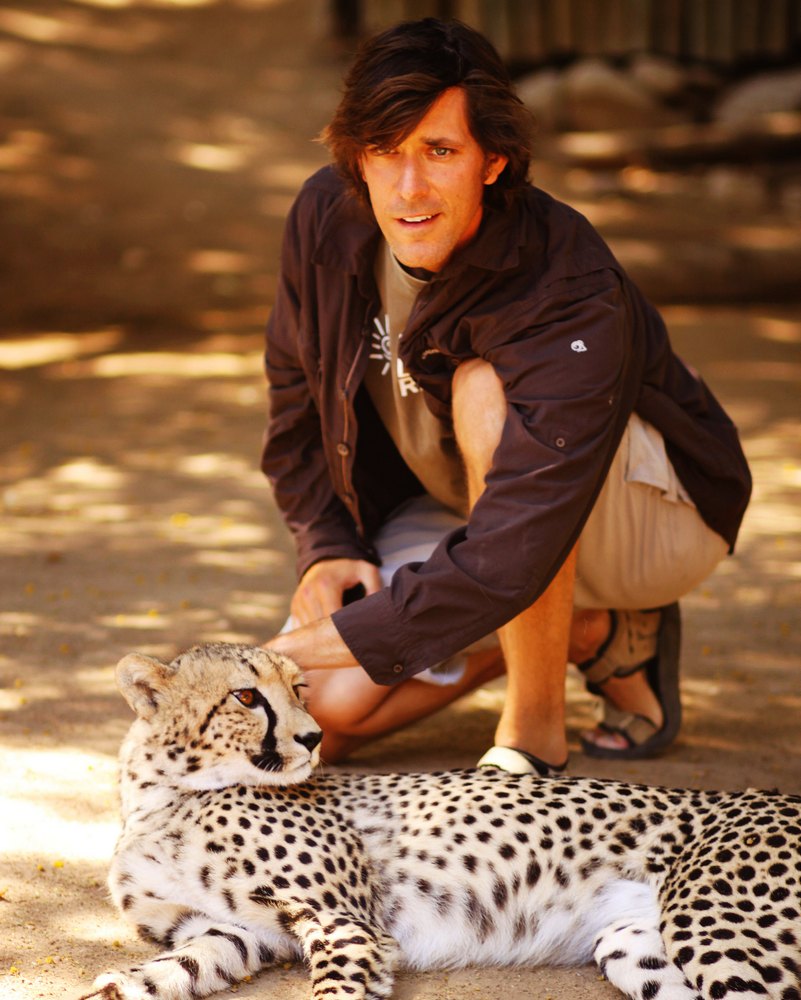 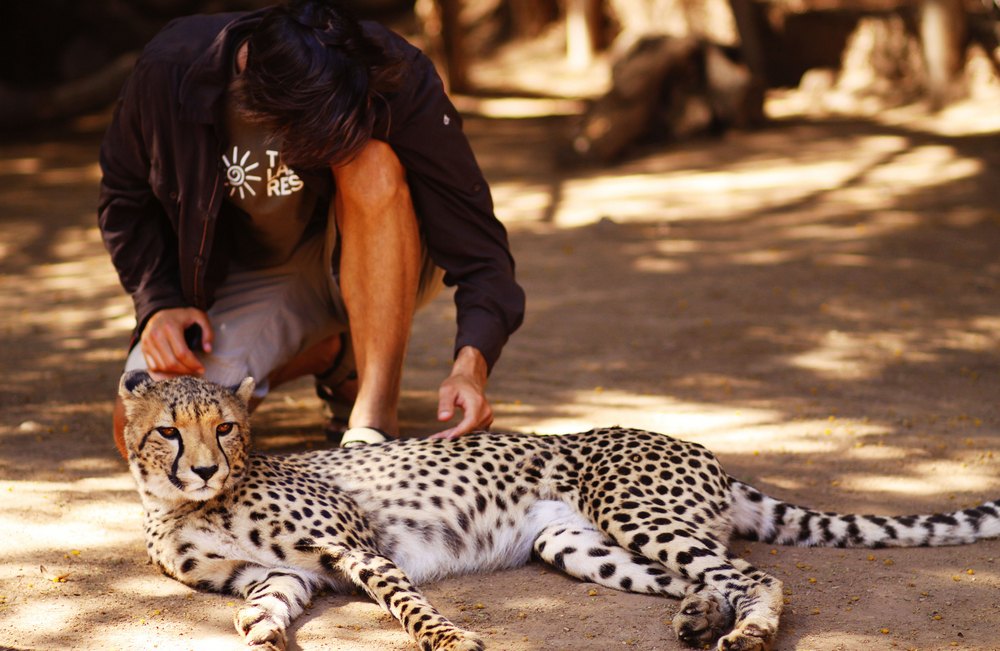 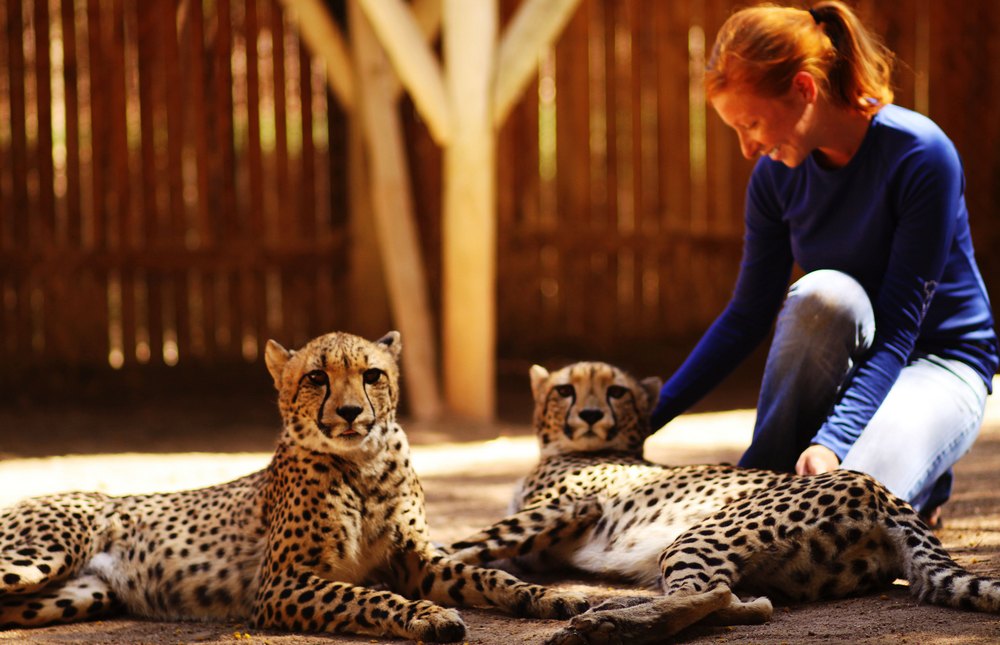 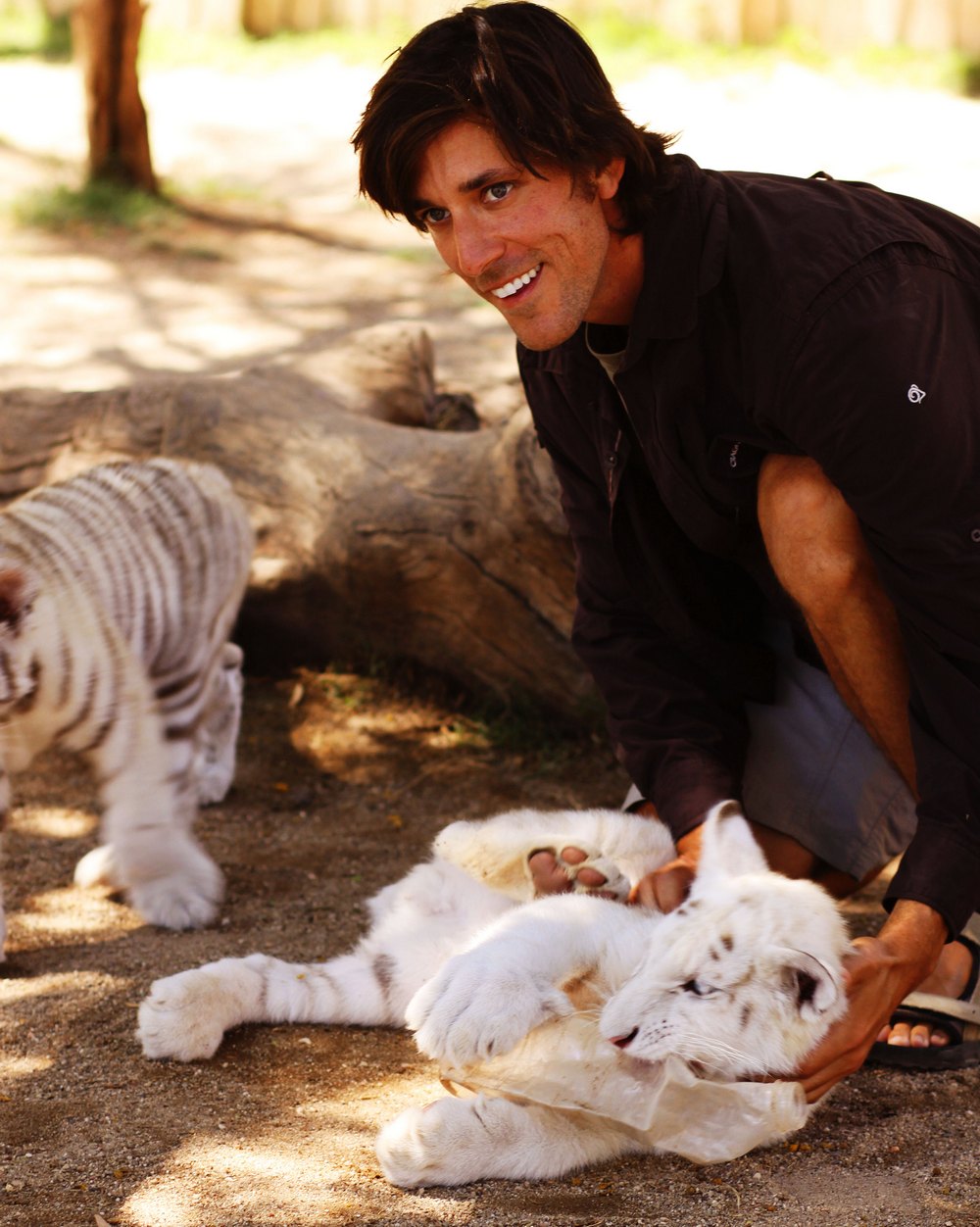 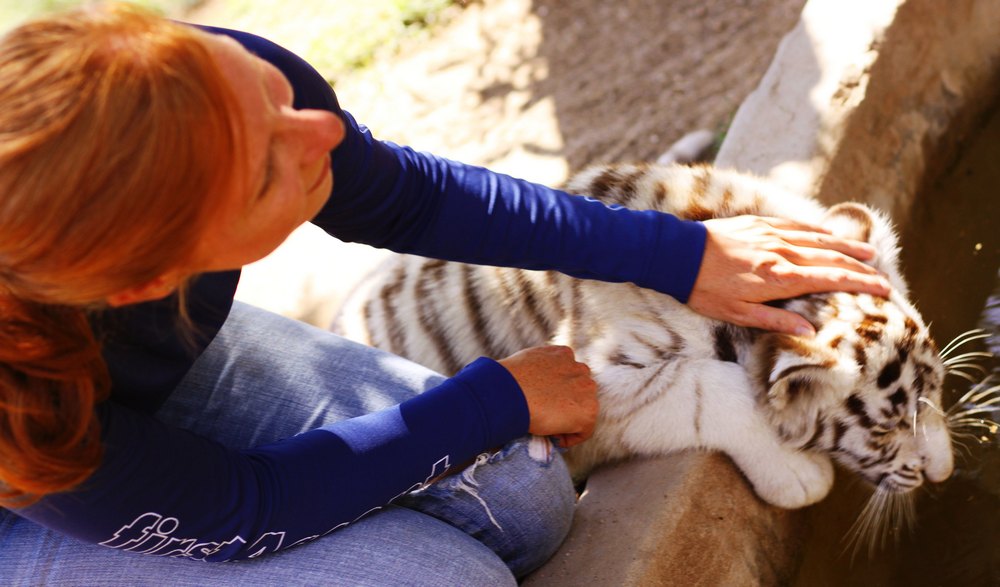 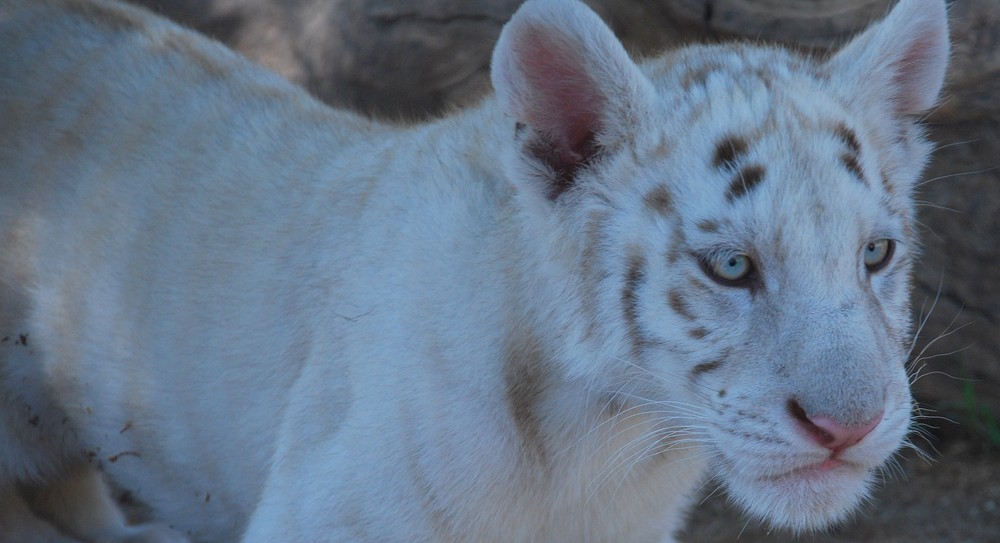 This happened at a private reserve in South Africa.

We had planned on visiting an ostrich farm after Cango Ranch but were so disenchanted by the prospect of another tourist trap that we bagged it. Instead we drove north and did a loop that took us through the Swartberg Pass and back to Oudtshoorn. Along the way we bypassed the Cango Caves which are reputed to be lovely. One look at the hordes of tourists piling in was enough to dissuade us. At that point we just felt like driving. 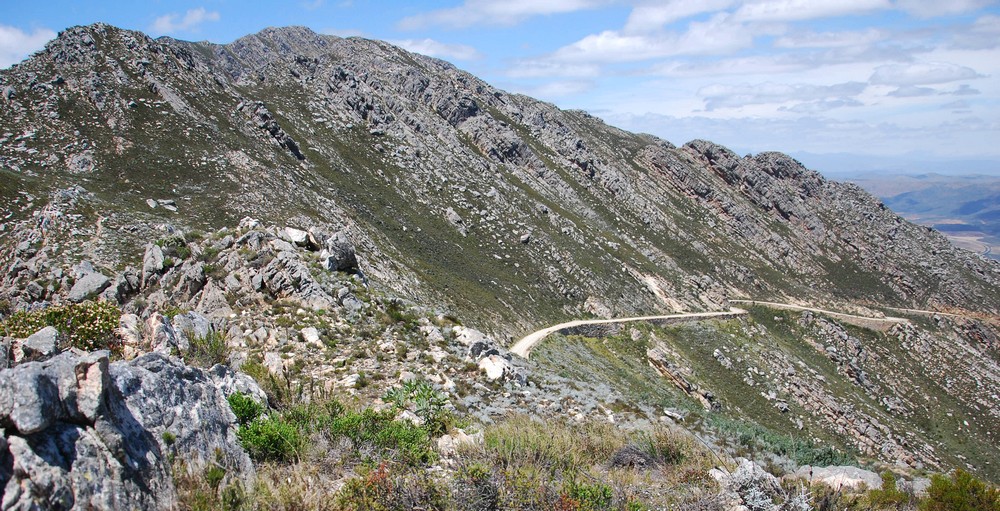 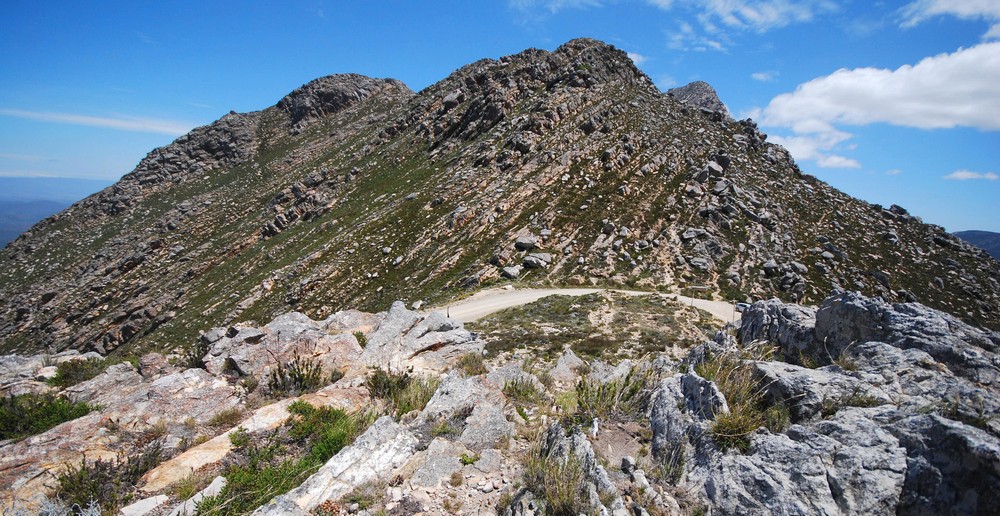 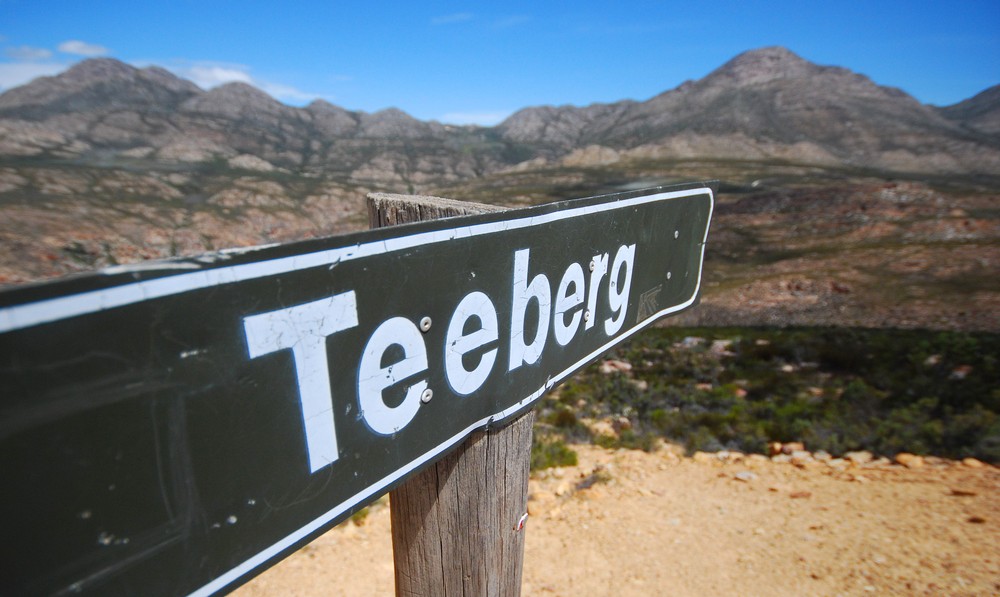 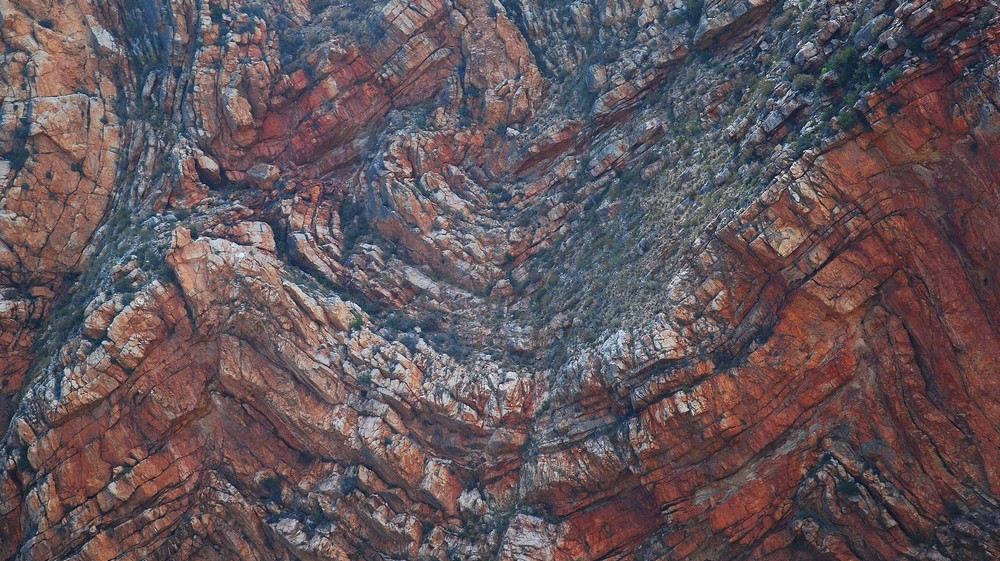 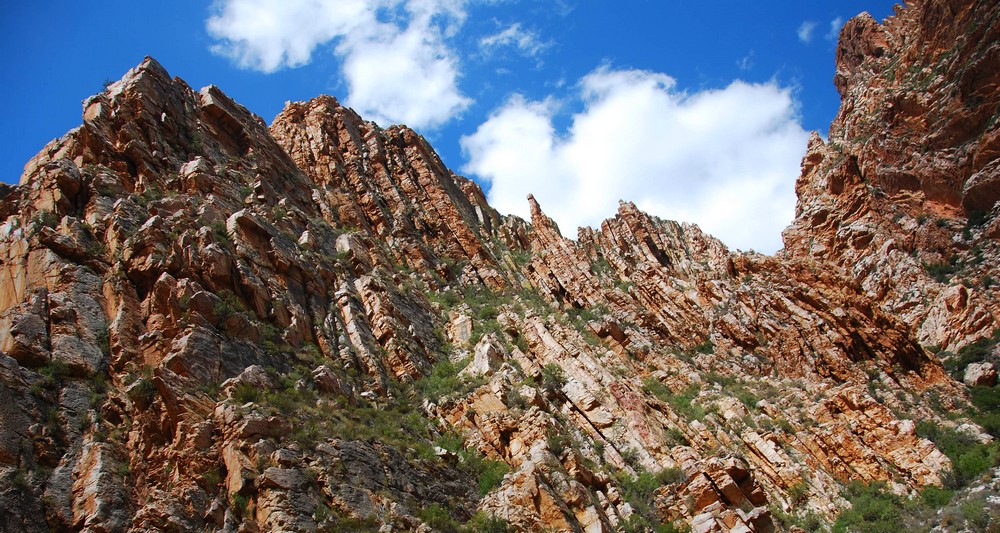 The next morning we left Oudtshoorn but not before remembering we'd forgotten to inquire about a ‘meerkat experience’ organized by Grant McIlrath, the world’s foremost expert on meerkats. You cannot just show up. It is necessary to arrange in advance and it ain’t so cheap (about $90 per person). It was the 'advance' aspect that discouraged us. We sent a few texts to the number provided in the Lonely Planet but failed to receive a response. Reluctantly, we moved on. Missing the meerkats would be the 2nd biggest regret about my trip to South Africa. Who the hell goes to Oudtshoorn and skips the meerkats? Assholes, that's who.
Posted by Rich at 6:46 AM