May 3rd, 2011 (February 2011) – 'More German than Germany'. That is how el guidebook describes Swakopmund. So on the desert coast of a Southern African country you have a bizarre mixture of German-Namibians and German tourists. Right. Yes, that’s odd. And it is a little bit difficult to remember where you actually are in the world when making your way around the city. We spent two nights there revitalizing a bit, reaping the decadent comforts of sleeping in a bed. I also spent entirely too much time wrangling with Avis. They do try harder….to exasperate the snot out of you! 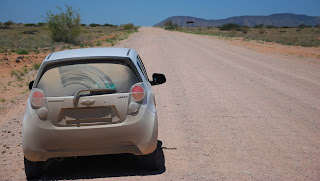 Why Germans? Well, In 1884 Namibia officially became a German colony as a counter to growing British hegemony in the region. The locals were thrilled, so thrilled in fact that two local tribes (the Herero and Namaqua) mounted a rebellion. Guess who came out on top? As a result half the population of the Namaqua and somewhere in the neighborhood of 80% of the population of the Herero were exterminated. And the band goes marching on…

Oh but don’t fret, after World War I the Germans lost Namibia…..to South Africa. For the next 75 years (give or take) Namibia was merely an extension of South Africa and was bequeathed all the benefits of apartheid. They did eventually gain their freedom on March 21, 1990 although in many ways Namibia is still highly dependent on South Africa economically. For example, the Namibia Dollar is pegged to the South African Rand.

Wonder why Namibia has such vast swaths of nothingness? It is a country roughly half the size of Alaska with a population of 2.1 million. Density wise it is second only to Mongolia. As some of the pics on my blog indicate outside the metropolitan areas there ain’t a whole lot of folks. If you are ever feeling like you need an escape from humanity Namibia is the place. It is perfect for those wishing to unleash their inner Ted Kaczynski.

To be honest Swakop did not really tickle my fancy. It is the most heavily touristed area in Namibia and it does not take a psyche major to understand my aversion to such an atmosphere. Sure, it is the adventure capital of Namibia but I believe that title is becoming more dubious by the year….and expensive.

So we departed Swakop in the morning under a cloudy sky and a light drizzle. As we drove out of town we were forced to slow our pace in order to avoid mowing down marathon runners. I suppose if you are going to run a marathon in the desert a cool rainy day is bliss. The race was sponsored by a uranium mine (Rossing, i.e. Rio Tinto). Why does that just feel wrong to me? Dunno.

We went north along the coast and, I gotta tell ya, there was a whole lot of desolate forlornness about the place. Suuuurprise. The beach vista would fit nicely in the pages of Cormac McCarthy’s The Road (The final scenes were actually shot on the coast of Lake Erie). As if to emphasize the mood you will find the decaying remains of dilapidated vessel decorating the set. If you want to pretend it is one year after Armageddon I can suggest a backdrop for your dark fantasy. 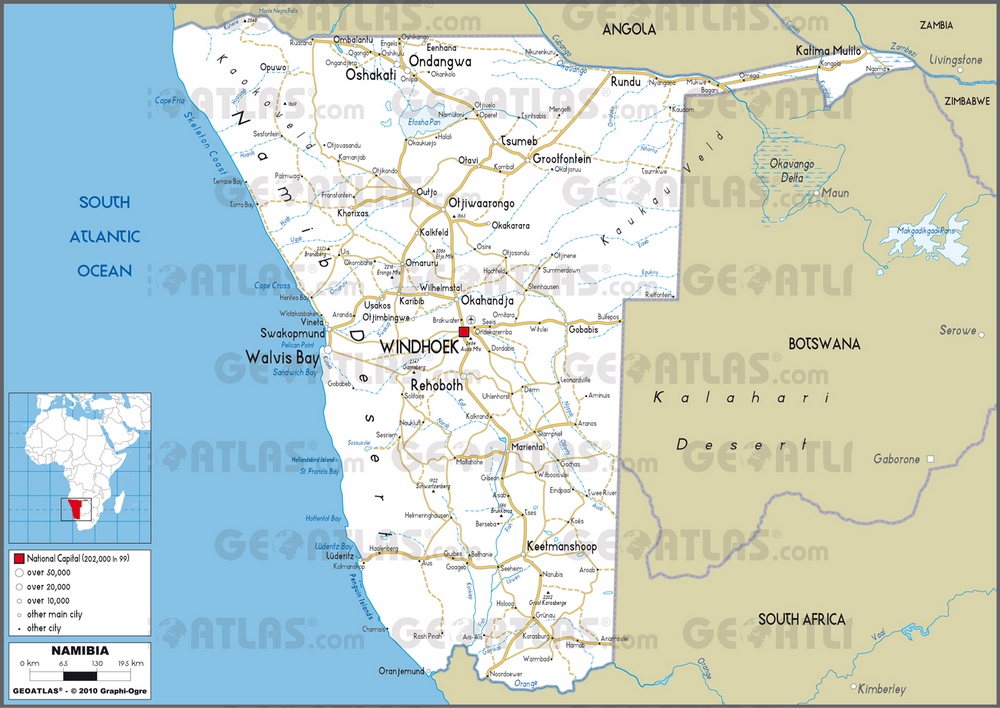 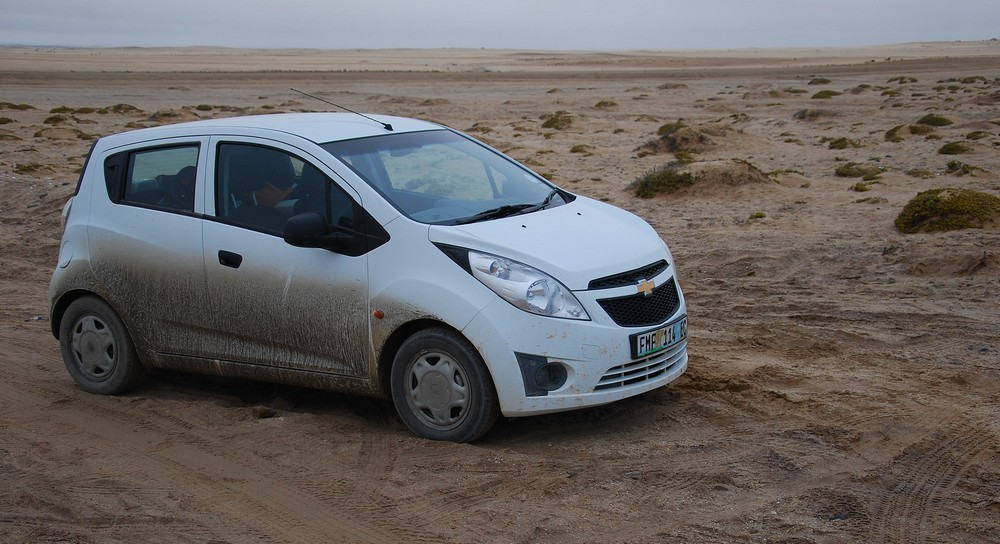 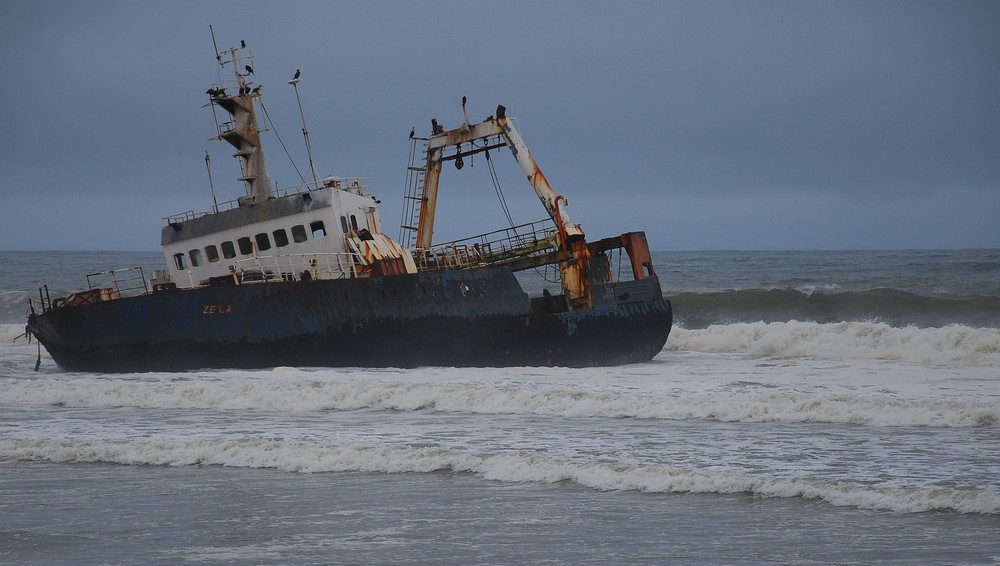 We toyed with the idea of exploring the Skeleton Coast farther north but neglected to do so for four reasons. Firstly, we read conflicting reports about the necessity of a permit. Second, it appears there was insufficient lodging. Third, the locals we mentioned the idea to responded with, “Why would you want to do that?”. And last but not least it was reportedly not Spark-friendly terrain. I have the distinct feeling we missed something remarkable.

So at Henties Bay our compass turned inland to the northeast toward Damaraland. There are rumored to be wild elephants roaming the landscape but we were not fortunate enough to cross their path. Shucks.

On to the White Lady of Brandberg. The ‘White Lady’ refers to a figure in a rock painting on an overhang inside Brandberg Mountain. There is controversy over the origins of its creators. Originally thought to be of Phoenician authorship (as in Mediterranean) it is now generally agreed to be the work of local bushman (i.e. San) that are thought to have populated the region. In fact it is probably not a lady at all but a San boy covered in white clay as part of an initiation ceremony. We never saw it. Upon reaching the entrance we concluded that it was probably not worth the 45 minute walk to the cave under the midday sun. Instead we ate peanut butter and jelly sandwiches and stared at a lizard.

Equally unsuccessful were our efforts to reach a rest camp in Twyfelfontein, an area renowned for extensive rock art galleries and a certified UNESCO site since 2007. After crossing one particularly iffy stretch of wet sand we finally threw in the towel when Sparky balked at an exceptionally ominous patch of sand and water. Foiled again. We had made an attempt to abandon the Spark in Swakopmund (we never told him of course) for the safety and confidence of a 4wd Toyota Hilux but Avis pooped all over that notion. In addition to setting us back two kidneys and a liver it would have fomented confusion on a biblical scale (for Avis, not us). 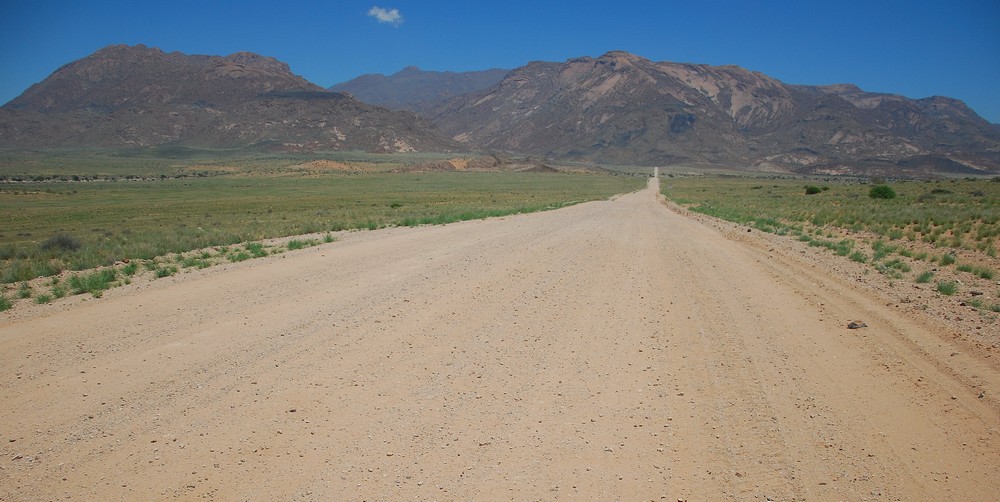 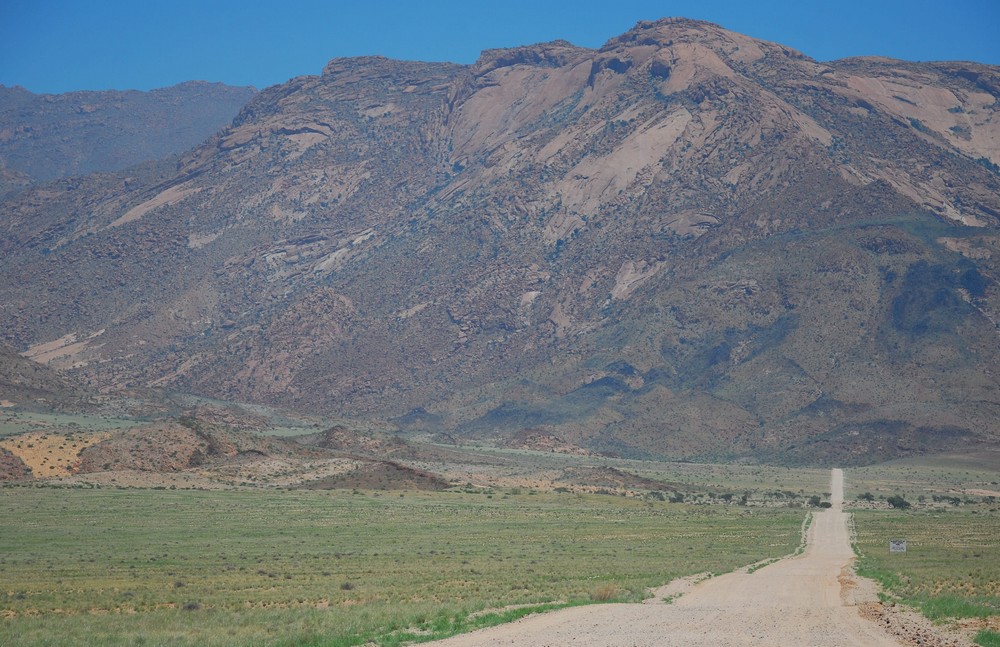 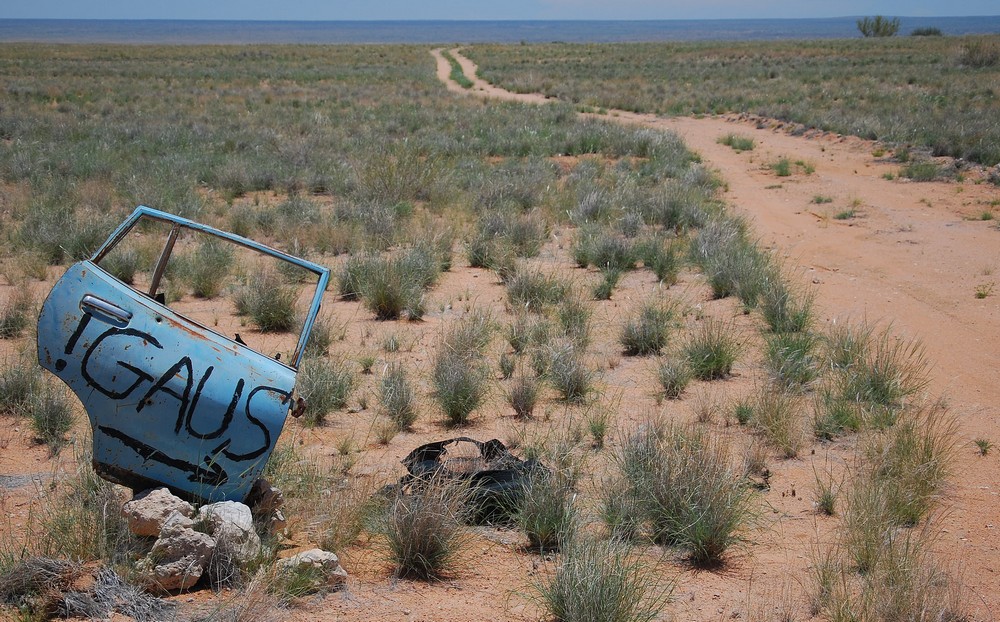 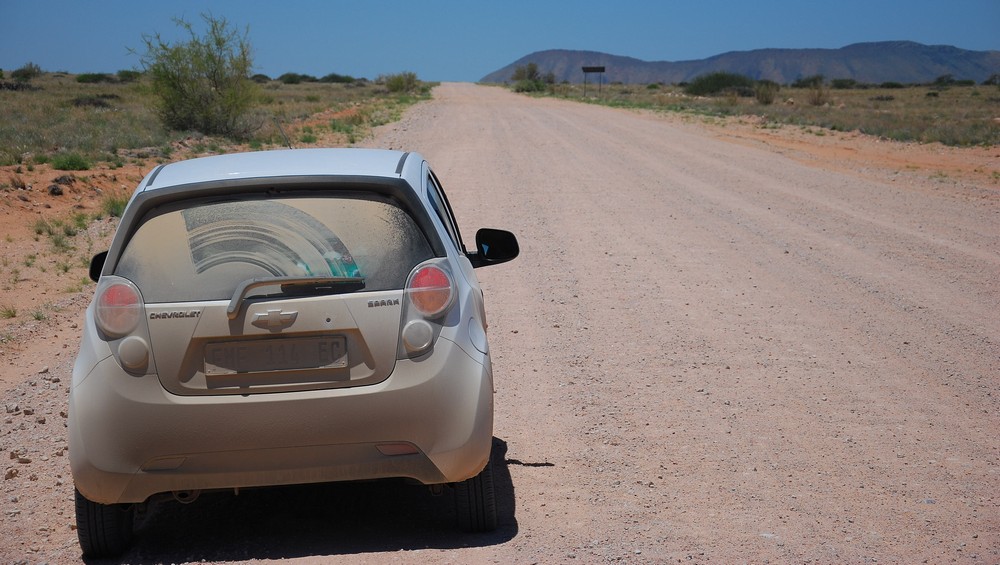 On our way out of Twyfelfontein we did have the pleasure of stopping by the local petrified forest near the city of Khorixas. As a child the term ‘petrified forest’ always conjured up visions of ominous looking stone trees standing upright on piles of ash in a normal forest configuration. In my world there may have been ogres and demons populating the area as well. And although I enjoy visiting such places I am still always a teensy-weensy disappointed by the reality.

However, the reality is truly stupefying. When I consider the process by which all the organic elements of a tree are replaced by minerals over time (it can happen in less than 100 years) my mind becomes boggled. Some of the trees we were looking at are not only hundreds of millions of years old but also originated somewhere in present day Congo-Brazzaville.

As interesting as the forest was it turned out to be our female guide that intrigued us the most. She introduced us to her native language which is nothing but a series of clicks. Sadly, I cannot remember her exact ethnicity (Damara? Nama? Herero?). Her demonstration was fascinating. I believe she said her language was a set of four clicks but that other tribes had their own languages that had seven or eleven clicks. And the best part is that apparently they cannot necessarily understand each other. Nutty.

The day turned into another driving marathon. We had not intended to drive from Swakopmund to Etosha National Park but that was how it played out. Due to the late hour we spent the first night outside the park not far from the gate. We found a tented camp that was quaint but a tad overpriced. (Surprise, surprise!) The owner was nice enough although curiously (upon discovering our nationality) asked us if we were hunters. Hunters? Huh? I guess a disproportionate amount of Americans come to Namibia to kill shit on private reserves, at least in his experience. That’s nice. When looking at Leslie and me one might arrive at a variety of conclusions but hunters? WTF?
Posted by Rich at 6:32 AM