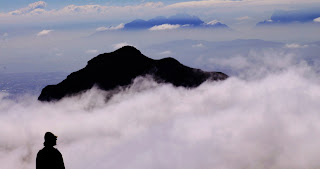 April 15th, 2011 (February 2011) – I suppose you can’t go to Cape Town without heading up Table Mountain. And if you get up there early enough it can be borderline enchanting. Wait until later and you’ll be tripping over a sea of humanity. There are more than 300 climbing routes up the mountain along with cable car access. I do not regret taking the cable car as it is worth a ride but hindsight being what it is I wish I’d attempted the Indians Window Route up and used the car to descend.

It ain’t no joke and people die every year.  You don’t need special equipment but parts of the route are basically straight up the cliffs (climbers can be seen making their way up from the cable car). The weather can turn on a dime and I did read that it is possible to make wrong turns. Still I wish I’d at least tried. It is very likely I would have turned around but it kills me a bit that I did not make an attempt. I have no doubt the experience would be unforgettable. There is a much easier trail (Plattkilp George) but it does not look terribly interesting and has ant colony-like traffic going up.

The views from atop the mountain are undeniably stirring, especially when the scene is painted with clouds. It feels a little like the domain of the gods, at least until the mortals start shuffling off the cable car en masse. To the west I could just make out the infamous Robben Island, home of one of the world’s most famous prisons and Nelson Mandela’s ‘residence’ for over 20 years.

I briefly considered staying an extra day to give Indians Window a shot but decided it was probably better to move on. As it turns out the weather did not cooperate anyway so we continued on our journey. We now headed south toward the coastal city of Gansbaai. Along the way we took a wrong turn and drove through a township not far out of the Cape Town area. Not a particularly good idea as crime is reportedly rampant. While stopped at a T-junction a man driving a local bus gave us a helping hand and pointed us in the right direction. And he did it in that subtle ‘what-the-hell-are-you-doing-here-you-crazy-ignorant-bastards?’'voice. Oopsie. 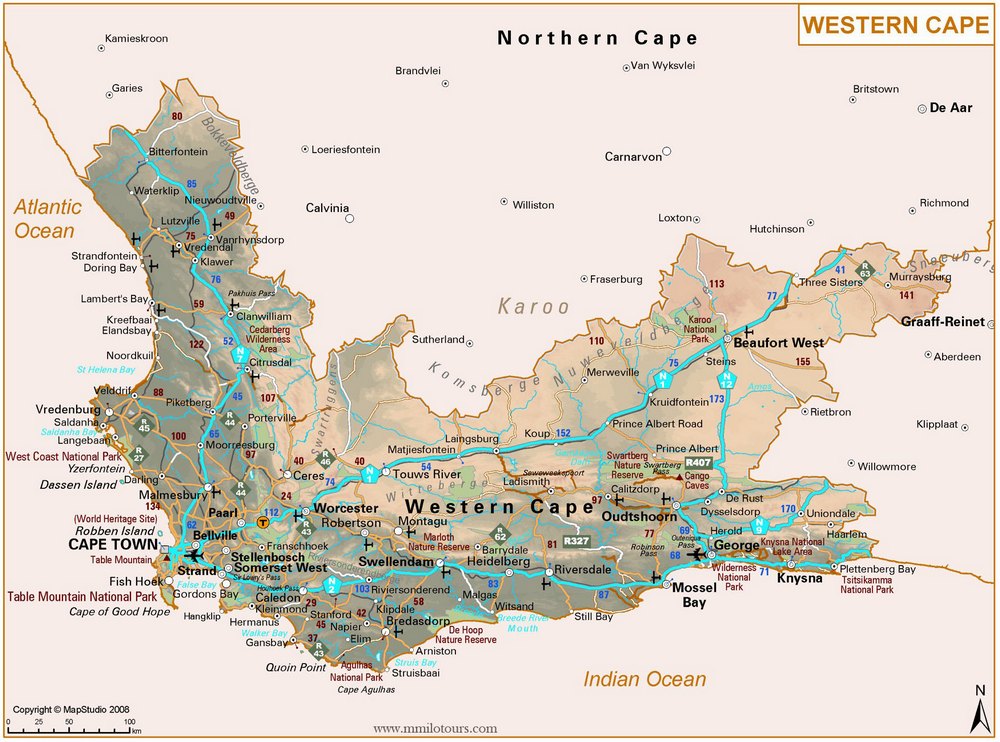 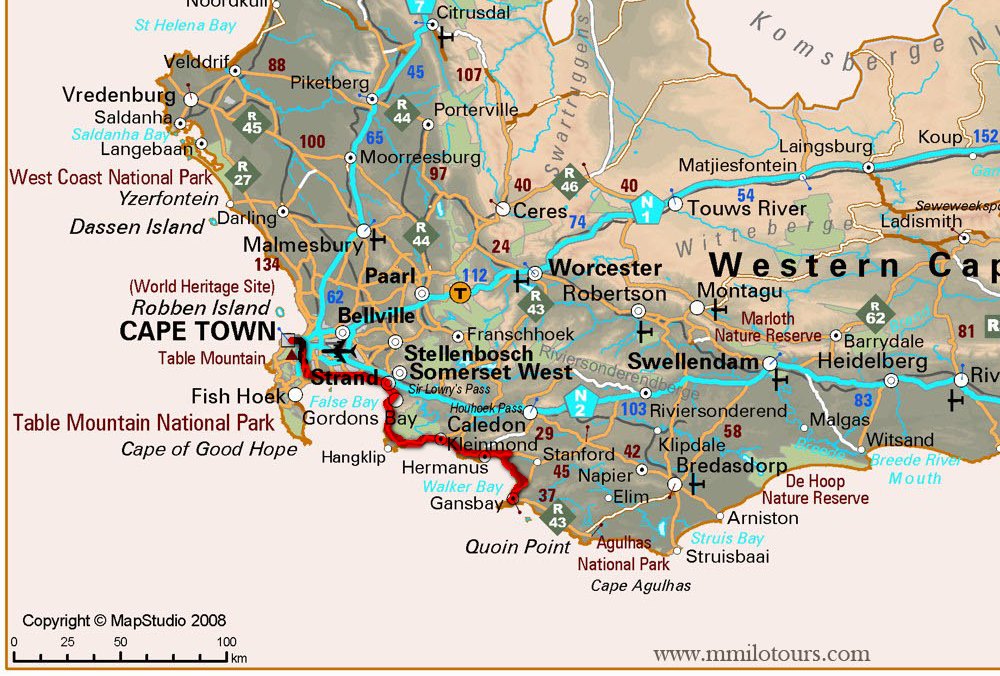 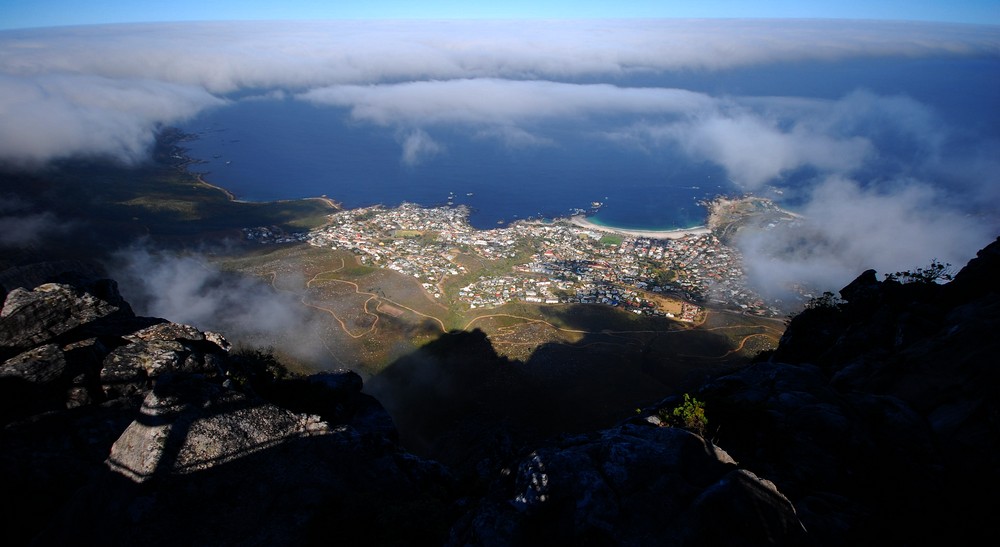 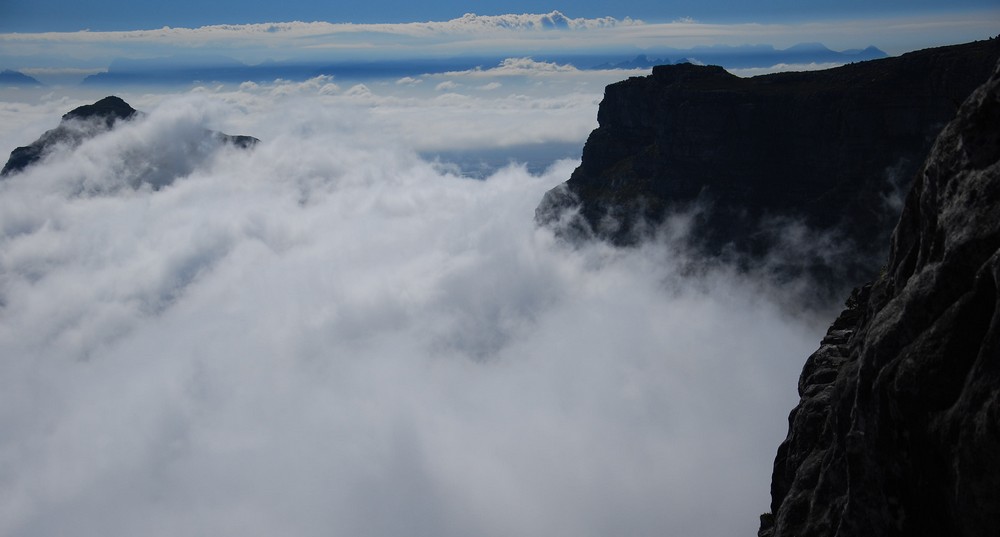 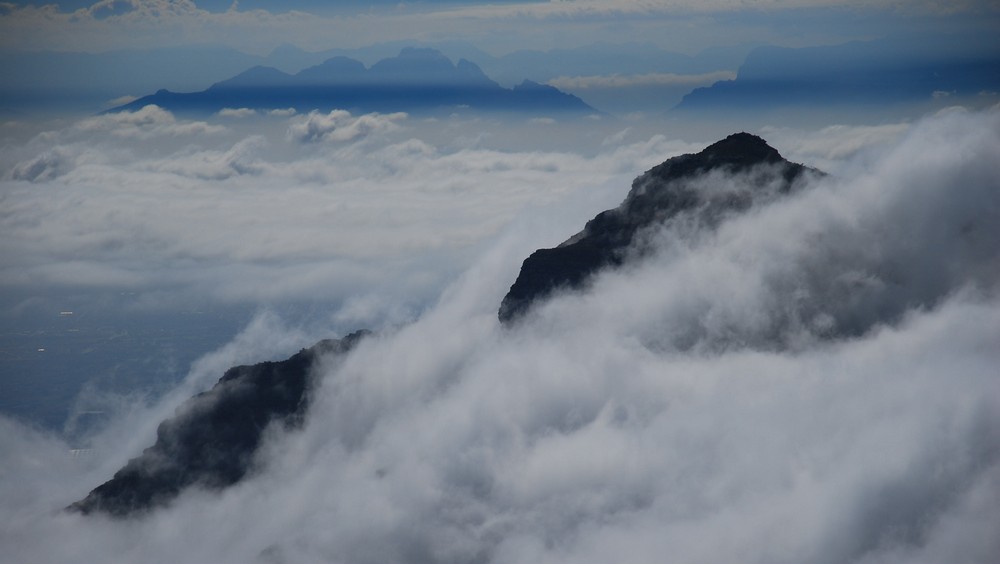 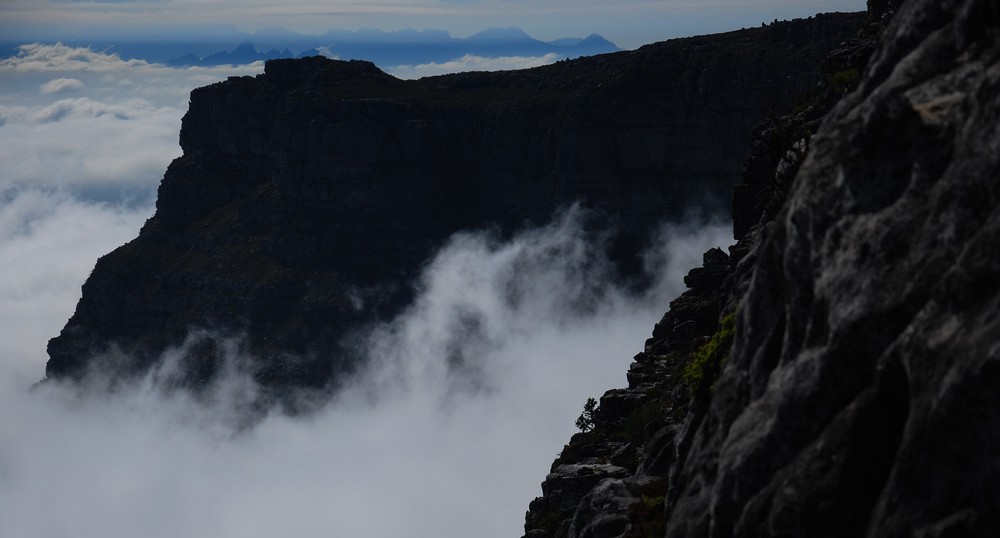 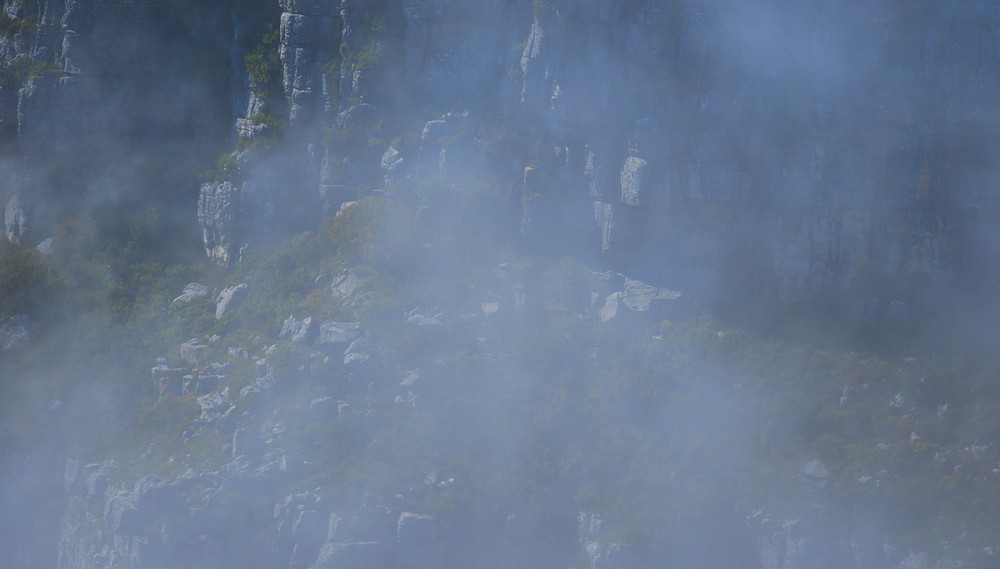 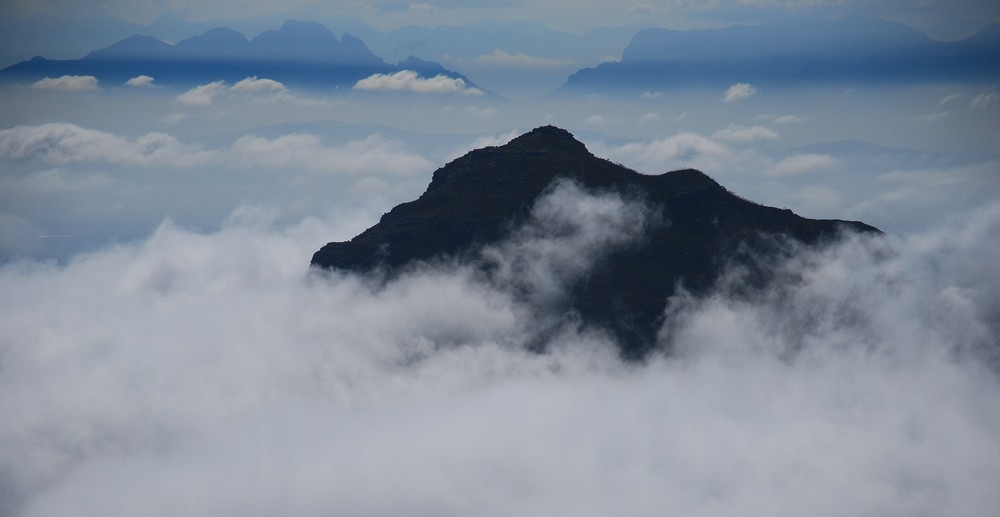 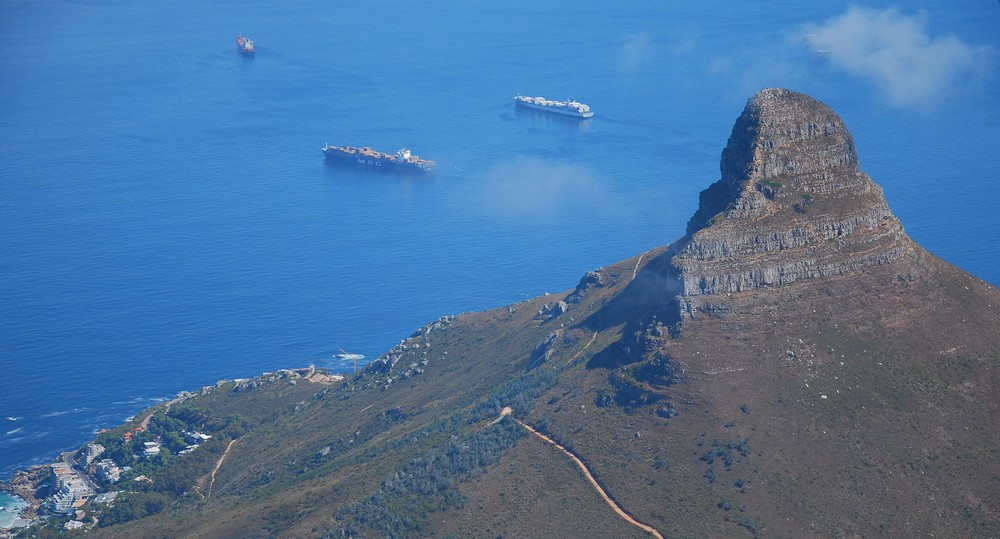 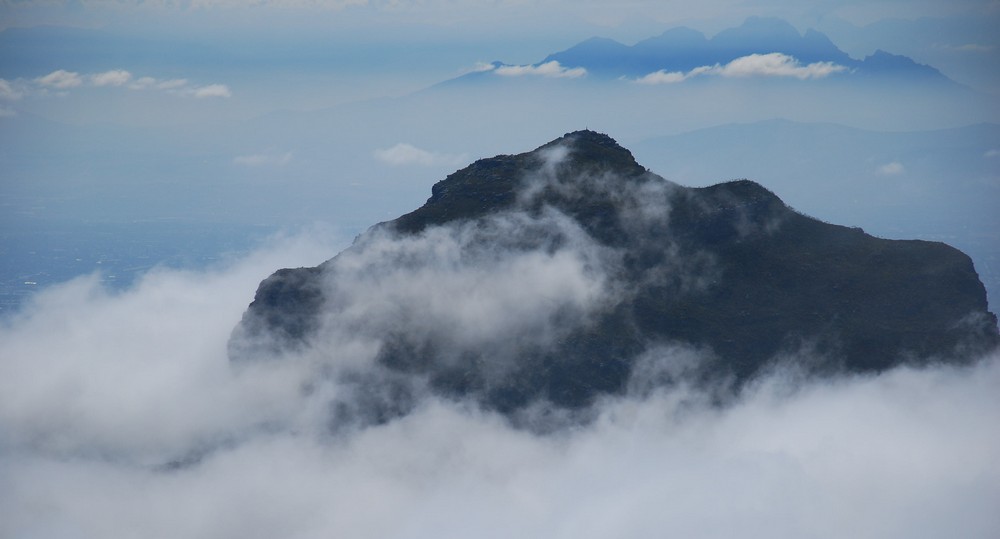 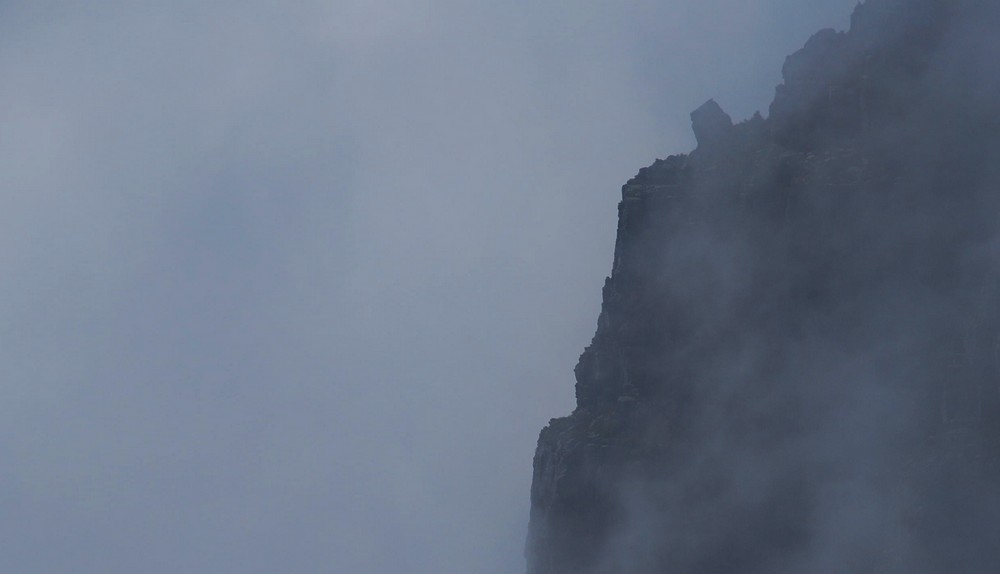 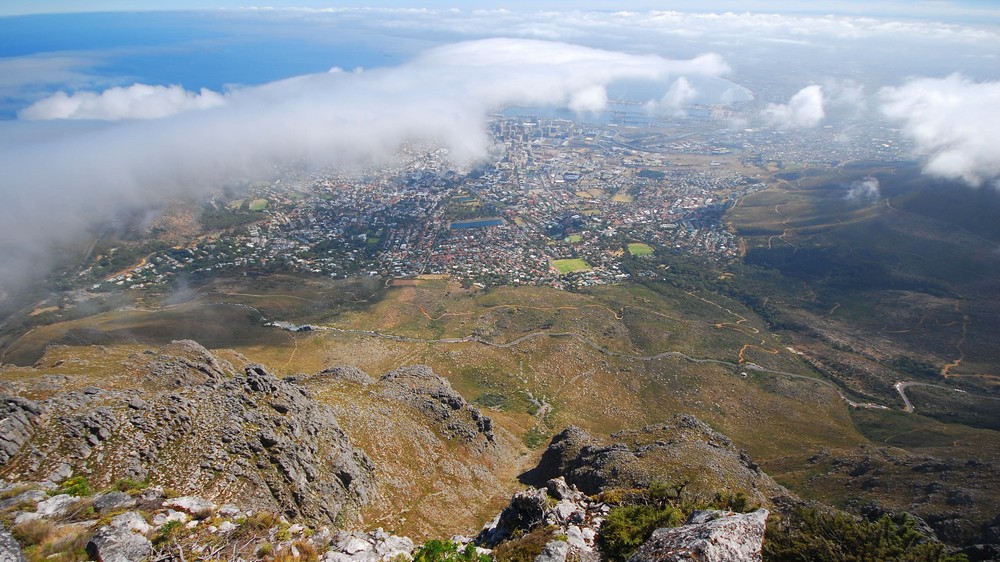 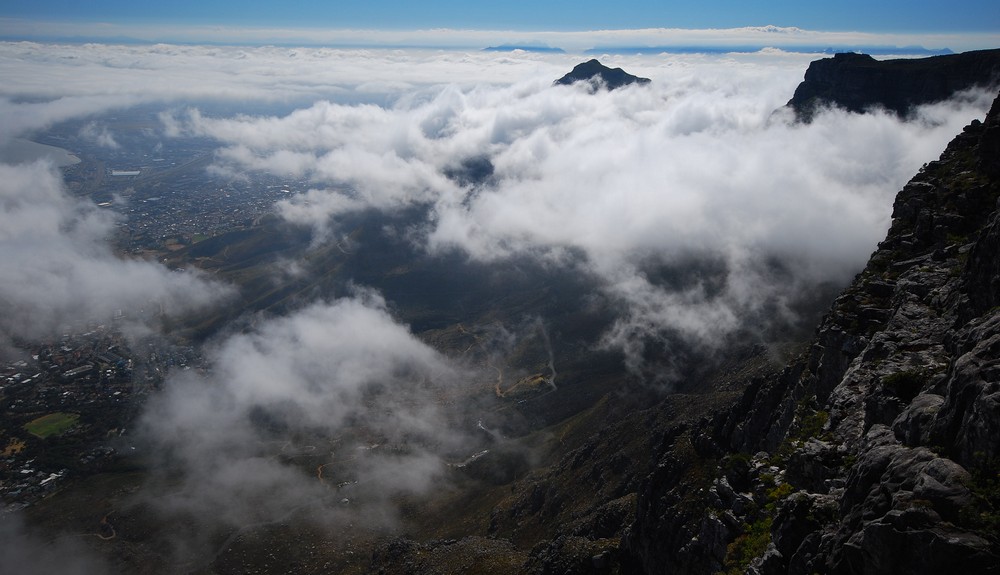 It happened while we were in Cape Flats area surrounding Cape Town. I have to admit that I am a bit disappointed with myself for the momentary panic that arose when we mstakenly entered townships on more than one occasion. Oh no! We’re surrounded by poor black people! Ruuuun!! It would be easy to conclude racism as the root of such thoughts but there is a harsh reality concerning life in South Africa. The chasm between rich and poor (i.e. black and white) is considered to be one of, if not the widest in the world. This is the sad legacy of apartheid. Inequality breeds poverty. Poverty breeds criminal activity. There is no getting around it. Throw in a healthy (if not justified) resentment of Whitey and the Gang and you might understand why two yahoo American tourists in a shiny white Chevrolet Spark containing heaps of visible personal belongings might experience a bit of distress when crossing through a township. Or we’re just assholes.

Most tourists go to Gansbaai for one reason: Great White Shark cage diving. We were no different. This is something that has been on my ‘bucket list’ for as long as I knew cage diving with sharks was possible. And there we were. For reasons I am unable to explain neither Leslie nor myself snapped a single photo while on board the boat. It was a combination of laziness, water concerns (camera), and a general desire to just sit back and enjoy. I was hoping the company would offer photos. Negative. They did make a DVD but the price tag (over $50 US) dissuaded us and it was not so terribly gripping to view anyhow. Still, hindsight being what it is perhaps we should have splurged.

The trip did not disappoint. We were told that it could take anywhere from 15 minutes to a couple of hours for the sharks to appear after the initial chumming (and a small chance of not at all). However, it was only 10 minutes or so before Jaws Jr. showed up. No dive equipment is involved as the cage is simply attached to the side of the boat. When Mr. Sharky Shark approaches you merely hold your breath and dip below the water. The sea was a bit frigid (13 Centigrade/55 Fahrenheit) but it can be much, much colder. Because there were not many folks on our boat and we were in the second group to enter the water we were able to sit in the cage for close to two hours. Much of the time is spent waiting and shivering but when you are given the signal and see those menacing jaws right in your face all discomfort is forgotten. You know you are enjoying yourself when the near total numbness of your extremities is insufficient to get your happy ass out of the water.

The industry is not without controversy. The argument is that a shark’s association of food with humans is not a good thing. Surfers are particularly averse to the practice. However, the sharks are not actually fed. The chum is merely a mixture of blood and other god-awful smelling fish juices and the only ‘food’ present is a tuna head that the sharks don’t actually swallow. They do manage to catch it in their jaws on occasion but no actual feeding takes place.

Now whether or not chumming constitutes less natural interference than feeding is up for debate.  I will say that allowing the general public to experience these magnificent creatures close up does foster a deeper appreciation for those that might simply discount these ‘insidious beasts’ as dangerous man-eaters (Thank you Steven Spielberg). In reality they are nothing of the sort. Most experts believe any human attack is most likely the result of confusion (as in our probable seal-like appearance from below). So from what I can see the benefit of public awareness far exceeds the danger of provoking attacks. There were 646 attacks reported from 2000 – 2010 worldwide (only 7 percent of which are fatal). Think of all the beaches in all the world and all the people on them on any given day. Do the math on that one.

Awareness is key. Populations are dwindling at an alarming rate. One of the employees informed the group that large Great Whites are rarely if ever seen. Nowadays more often than not it is the juvenile males that turn up (as was the case with us). Others are simply never given the chance to reach maturity due to overfishing and illegal hunting. Large jawbones are especially prized and are usually taken from large females, the ones most likely to reproduce. Not good. Not good at all.