April 7th, 2011 (January 2011) – After Graaf-Reinet we were off to Addo Elephant National Park for two nights. We’d heard there might be elephants there. Turns out the rumors are true. I saw them with mine own eyes. When the park was established in 1931 there were only 11 of them left. Now they estimate there are somewhere in the neighborhood of 450. Dumbo lives....for now. 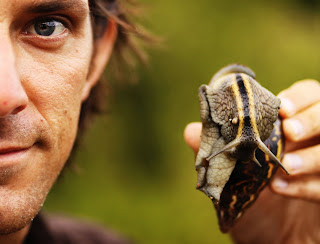 We arrived mid-morning, set up our tent near the park HQ (Addo Rest Camp), and restocked our supplies in the ‘town’ of Addo (if a petrol station, a market, and a liquor store qualify as a town) and spent our afternoon exploring the park in our VW Polo Vivo (Safari Edition). The park is roughly 164,000 hectares and split into three sections, one of which is where you find the majority of the larger animals. Over the course of two days we managed to see a variety of fauna to include buffalo, warthogs, elephants, flightless dung beetles, ostriches, jackals, a spotted hyena, lions (sort of), kudus, leopard tortoises, zebras, and a whole poop ton of birds.

Our first day was not such an auspicious beginning. The closing time for the park depends upon the time of year and duration of sunlight. On that day the park gates closed at 6:30 pm. We didn’t make it. Why? Well, the late afternoon/evening is the best time to spot wildlife and we got a little caught up. I blame the lions. And we (as in me) did something really stupid. While heading back we noticed said lions in a clearing up ahead but believed erroneously that the area in question was reserved for guests of a tented camp and not open to just anyone. 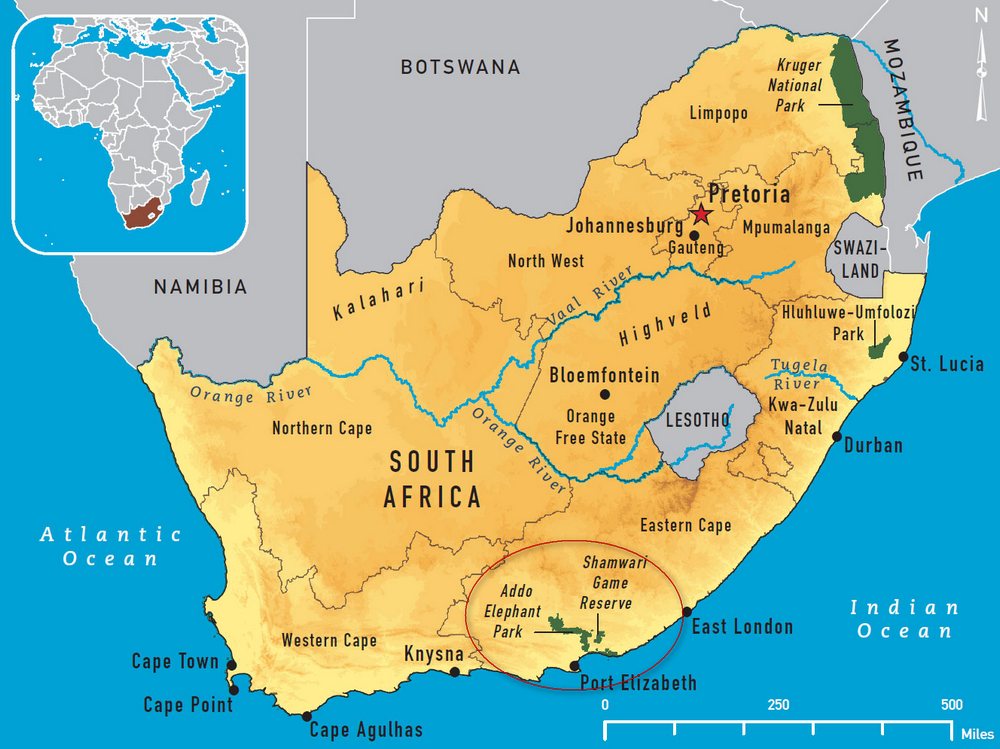 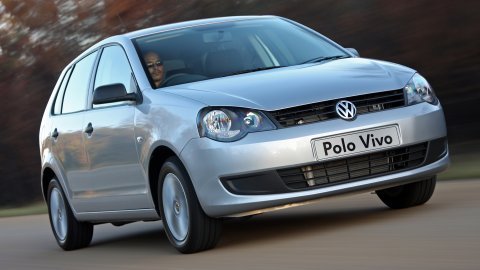 So annoyed by this was I (How dare they hog the lions!) that I turned down a road marked ‘No Entry’ alongside the camp and almost continued to a place near the clearing. However, it was evident that the path was not designed with a VW Polo (Safari Edition) in mind so I retreated. We found out later the clearing forms part of what is known as a ‘hide’ (i.e. a place where you can sit behind a wall and peek through special viewing slots designed specifically for the purpose). There is a waterhole in front to attract animals. I mistook the structure for a private camp. Oopsie-doopsie.

Imagine if you were sitting there quietly viewing a pride of lions when you suddenly spot a silver Volkswagen out of the corner of your eye inching toward Simba and the gang? Wow, did I deserve to get my ass kicked! I really have no excuse. It was an immensely douchey move. Not only did I risk getting kicked out of the park but we didn’t get to see the lions close up. All we had to do was park and walk into the hide. D-U-M-B-A-S-S. Big fat stupid dumbasshole.

I also blame the hyena. Our progress was halted once again when we noticed a lone Spotted Hyena walking down the road towards us with nary a care in the world, as if it was Addo Hyena National Park.  One word: awesome. Those things look completely insane close up, like they could go batshit at any given moment. I swear the fucker was laughing at us. We waved goodbye and moved on. 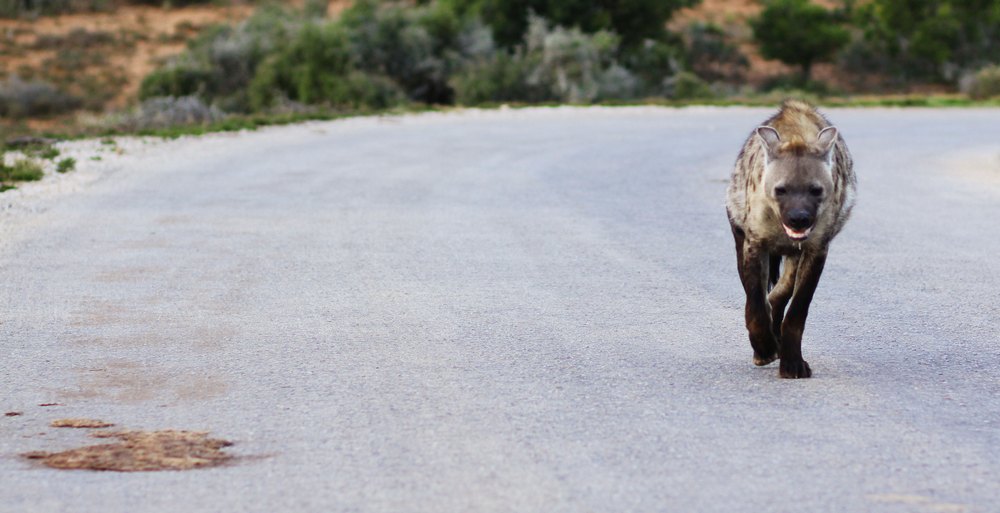 When we arrived at the gate sometime around 6:50 pm it was locked and no one was around. Huh. Soooo they lock the gate and then leave? Apparently. Leslie called the HQ and was instructed by the perturbed women at the other end of the line that they would either send someone along or we would wait until the scheduled night game drive appeared at the entrance to open the gate.  So we waited. For fun we should have phoned again and screamed that we were being chased by four lions, two elephants, a pack of hyenas, two homosexual chupacabras, My Little Pony, a hive of killer bees, two colonies of fire ants and a partridge.......in a pare tree. But seeing as we were already the 'Asshole Americans' it was probably better to refrain.

A gentleman finally showed up with a half-naked child in tow and was none too pleased. He demanded a little something for his trouble. We genuinely felt bad for disturbing his evening but it felt a little like extortion. I suppose it was his delivery that chapeth my asseth a teensy bit. We coughed up a few Rands and were on our way. Could it be that we were the only dipshits in the history of Addo Elephant National Park to be tardy? Not bloody likely.

When we arrived back at our campsite we found an older couple had taken the site next to ours. To make a long story short they both took exception to my parking spot, a spot that was near their site but in no way encroached upon the their enjoyment of the site. I watched in awe as the gentleman erected a tent and placed it right at the rear bumper of our car as if to say, “Get your f***ing car off our campsite!’ His wife then made it a point to walk between the back of the tent and my bumper while glowering at me like she was attempting to light me on fire using only the power of her mind.

Leslie and I were a bit puzzled by this behavior. I didn’t realize there was a different place for my car, mostly because the folks on the other side of us had occupied the lion's share of both areas. Even so all they really had to do was mention something and I would have been happy to move the vehicle. Instead they both went psycho passive aggressive on us. That’s one way to handle it. I am willing to bet their marriage is a great success.

When we finally understood what was going on I was more than willing to sit there sipping wine while watching the Grumps gradually lose their shit but the gentleman on the other side came over and told us there should be enough room for us to park. He actually knew nothing about the two children simmering next to us. Although tempted to savor the moment a bit longer I decided it was best just to move. Mrs. Miserable begrudgingly thanked me.  You’re welcome m’lady.

Who likes irony? The next morning I noticed the husband had placed his tent across the road in an empty campsite. I thought this a might queer (as in odd or strange). They must be in the throes of marital bliss to be sleeping in separate tents. After a few seconds I understood. The hubby was a bit of a snorer. In fact it sounded like he was felling an entire rainforest of trees with his respiratory chainsaw. This made me giggle.

The next day we spent 11 hours driving all over Addo. There was just something about being able to self-drive through an area filled with dangerous animals that really intrigued us. And the best part was that for much of the time we were alone. Apparently, it is only permissible to exit your vehicle at designated lookout points and then only ‘At Your Own Risk’. Get out anywhere else and you can get slapped with a R800 ($120 US) fine per person. Of course I didn’t happen to notice that warning written right on our map. I may or may not have exited the vehicle in order to photograph a flightless dung beetle, admire a snail, confirm a lion sighting far off in the distance, and save a tortoise from almost certain death while it was crossing the road.  And Leslie may or may not have stepped out to get a closer look at a buffalo skeleton perched on the side of the road. Who brought the assholes?

Now you may read this and deem us raging dipshits. I can understand drawing that conclusion.  The park ranger that saw Leslie dismount the Polo clearly thought so (luckily, no fine). However, it is not as if I got out and tried to dry hump a leopard. I never left the road and if it is okay for maintenance crews to be out and about in the park on a daily basis (we saw them repeatedly) I am pretty sure a few moments snapping pics of a dung beetle falls at the lower end of the risk scale.  Many would disagree. I just couldn’t help myself. Beetles make me giddy, especially ones that roll huge balls of shit everywhere. Proportionately speaking I would have to roll a ball of my own shit the size of a mini-van. Well, it would not have to be my shit. Any shit would do I suppose. The point is dung rolling beetles are cool.

It goes without saying but I would not f**k with elephants. On more than one occasion our car was either surrounded by a herd or was, what seemed to us, perilously close to a large bull.  They are used to vehicles (but not people) so the danger is small but more than once I considered what would happen if Dumbo decided Fahrvergnugen was bullshit and smashed our Volkswagen to smithereens. It was simultaneously both terrifying and exhilarating all at once at the same time together. Up close and personal with the planet’s largest land animal. Highly recommended.

I thoroughly enjoyed our time at Addo but I have to admit at times it felt a little like we were driving inside a really big zoo. The cages might be invisible but, in essence, they are still there. Actually, no place we visited in South Africa felt particularly 'wild' and it appears that every inch of land is fenced off. I believe it was Robert Frost that said 'good fences make good neighbors.” Of course, he meant the exact opposite. In my heart I know that fences/zoos are necessary to protect the animals but it is that necessity I find so troubling. 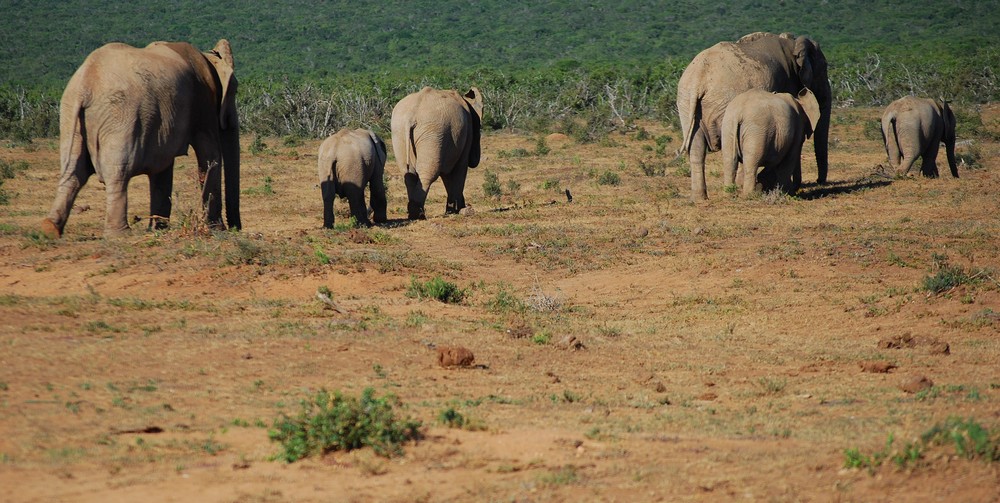 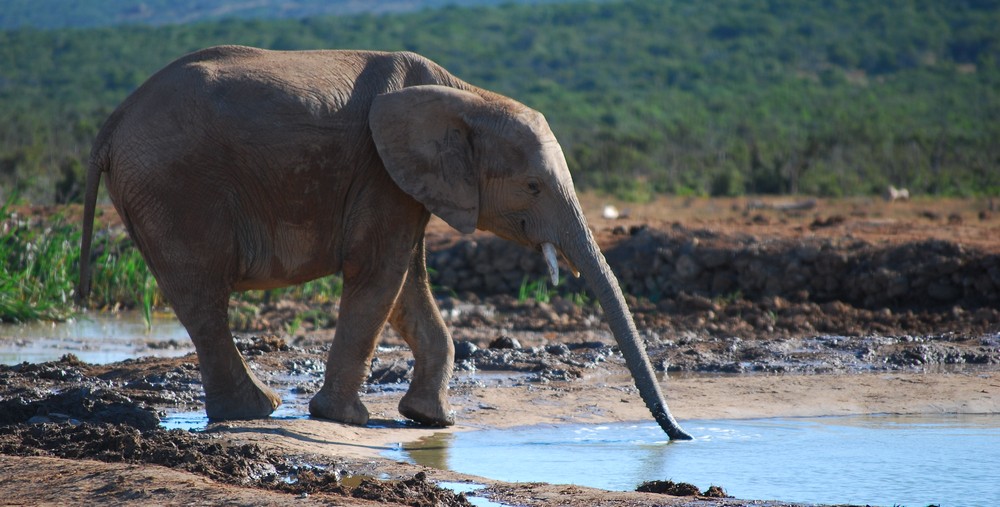 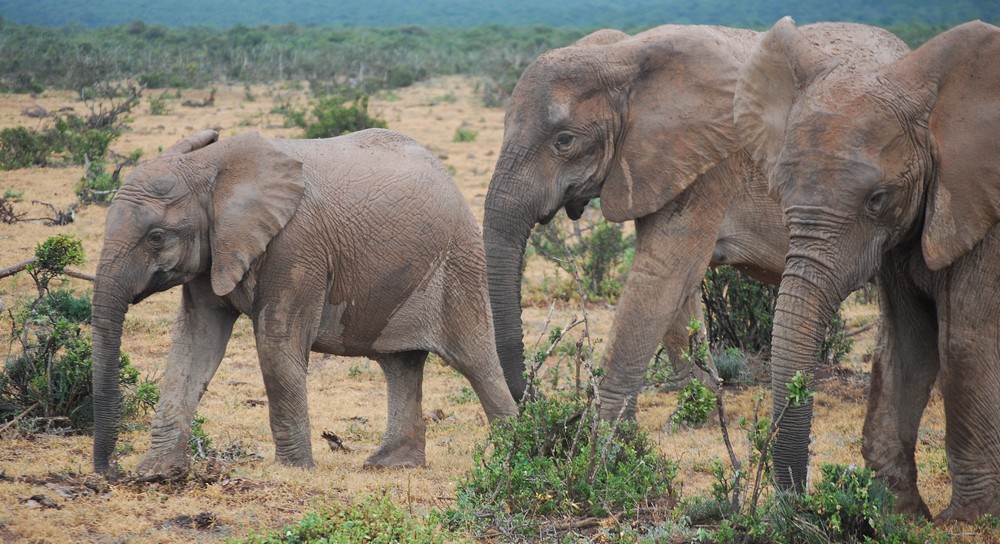 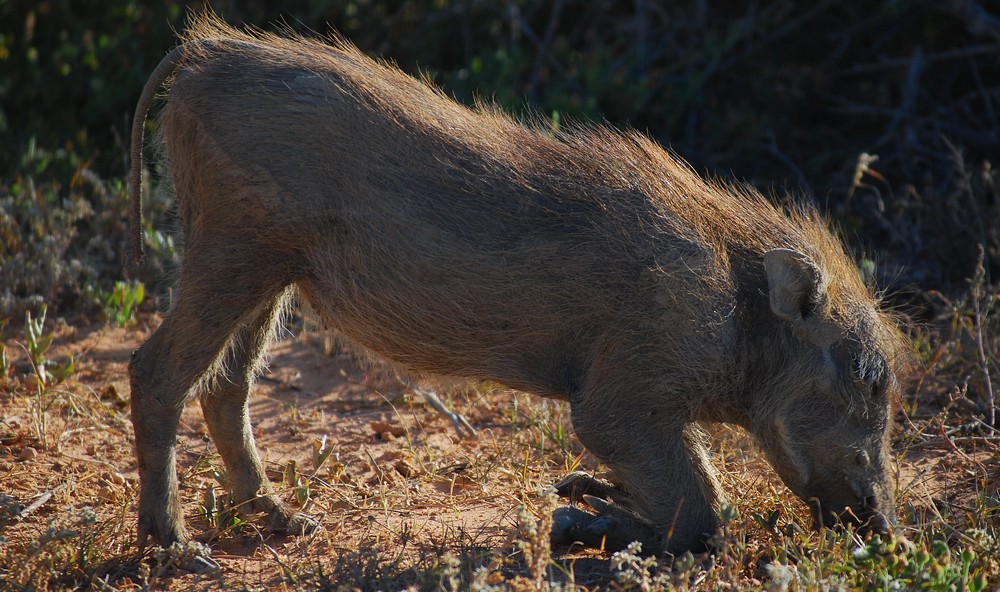 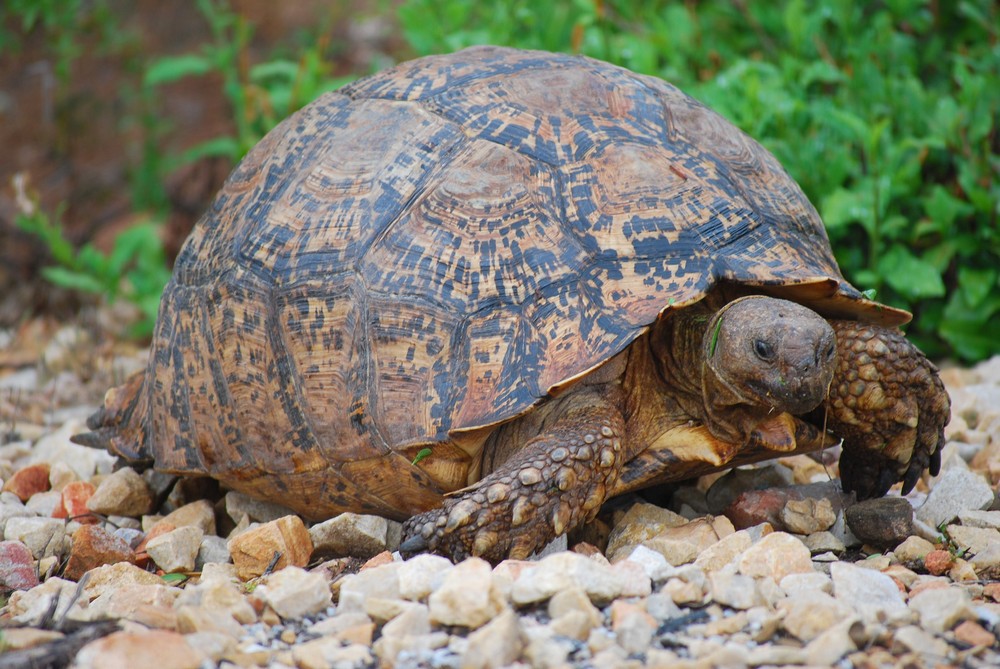 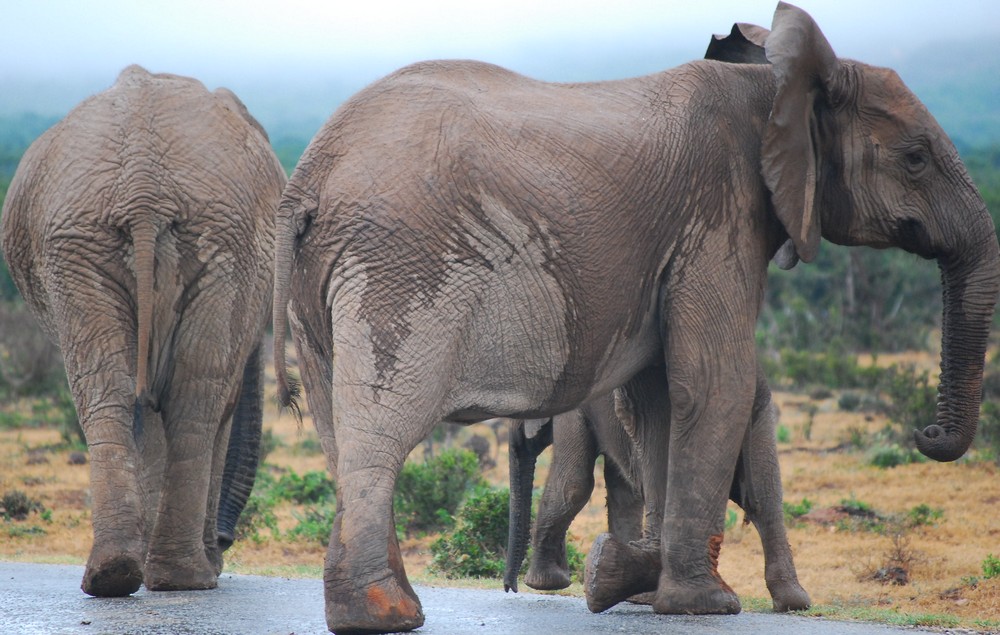 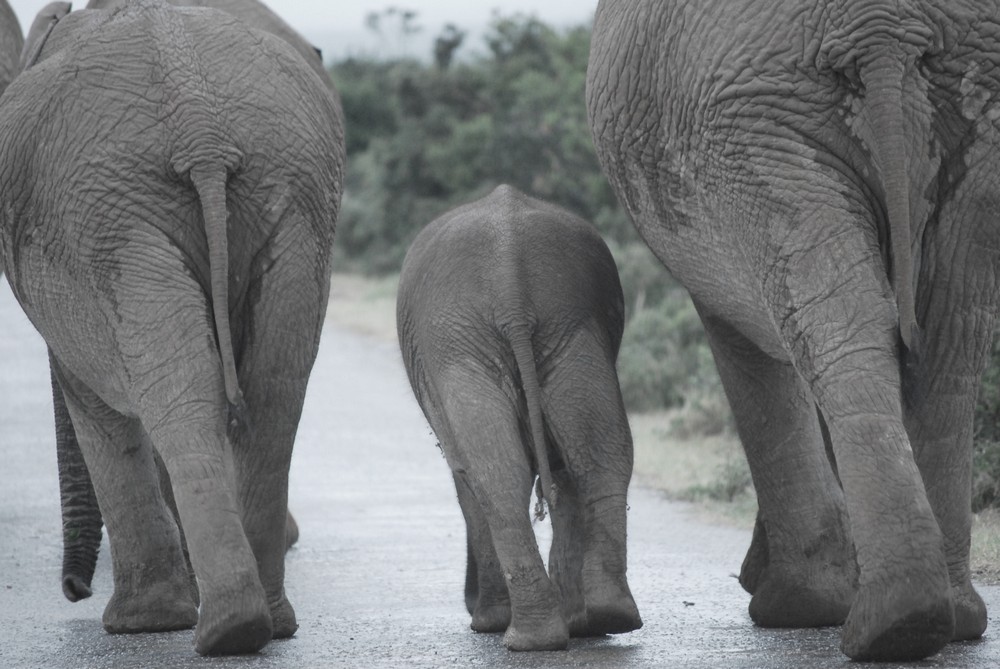 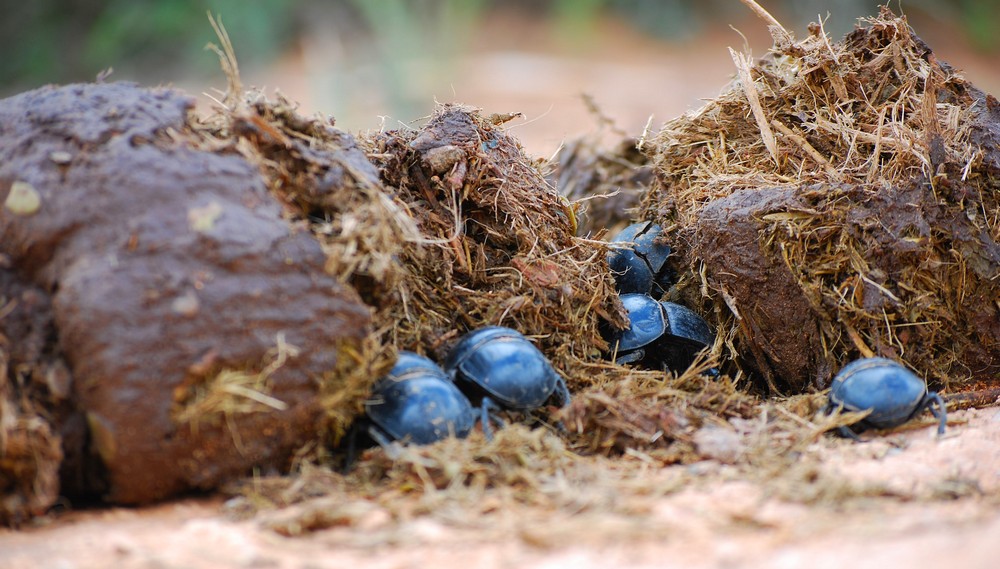 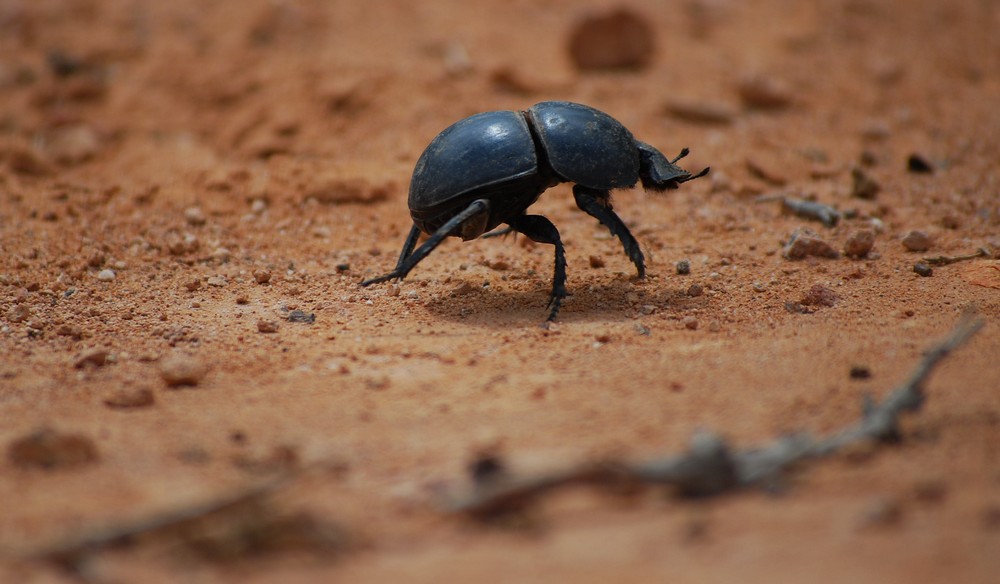 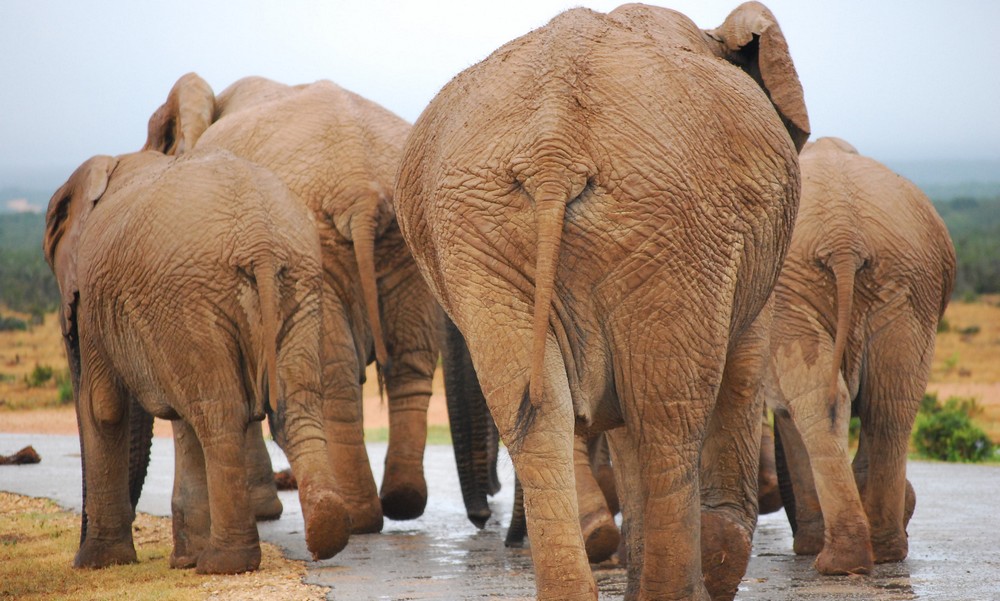 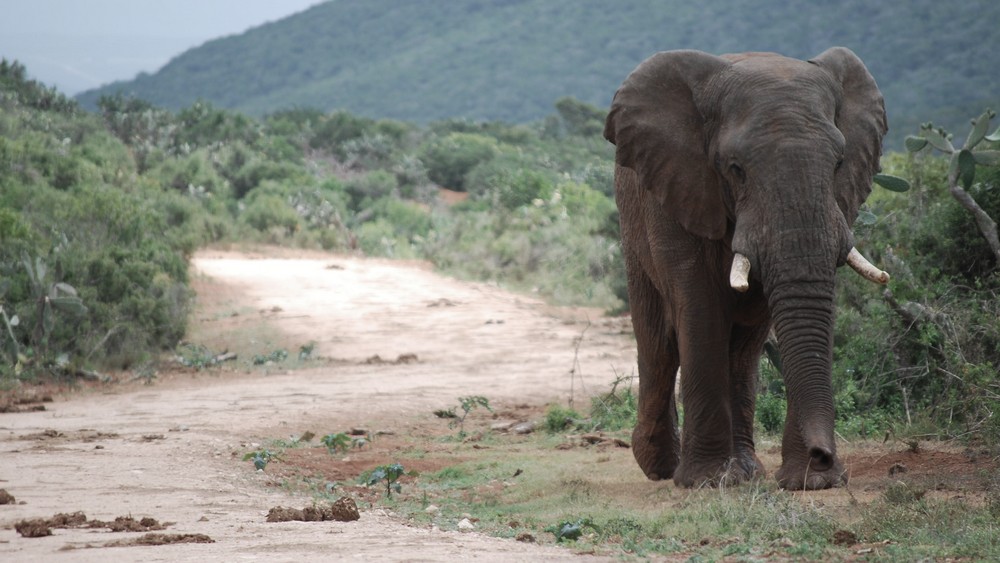 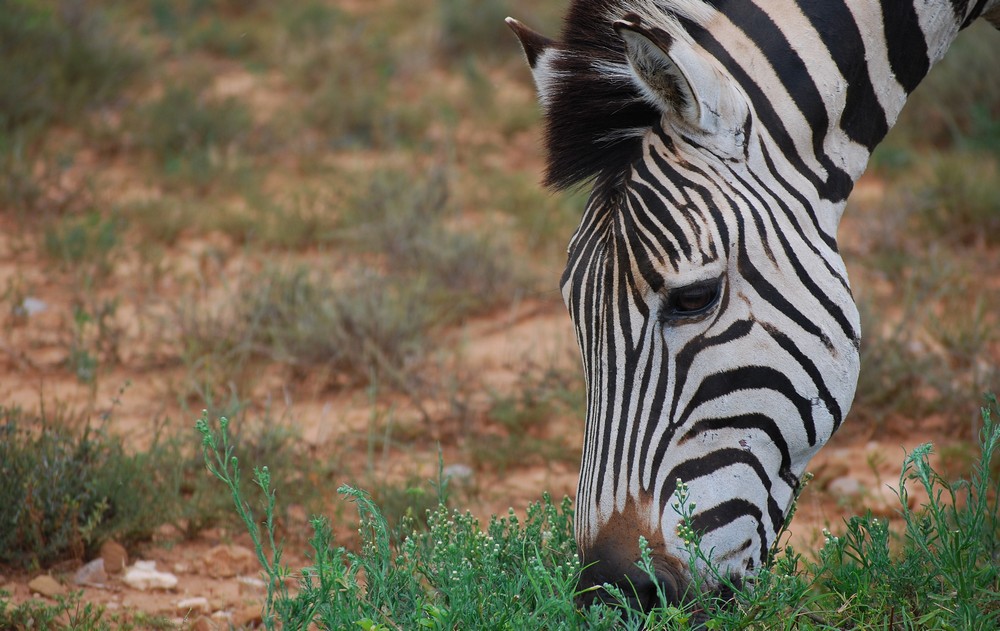 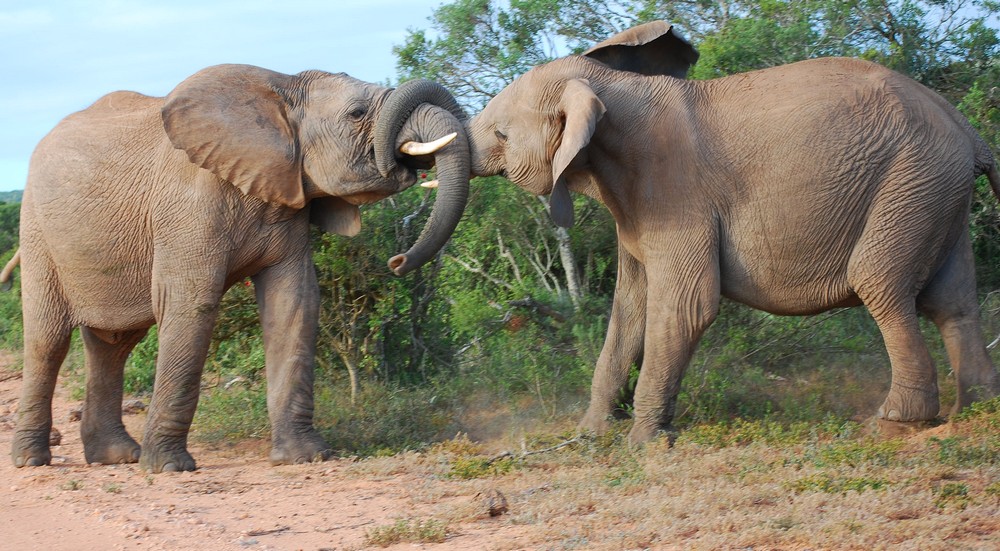 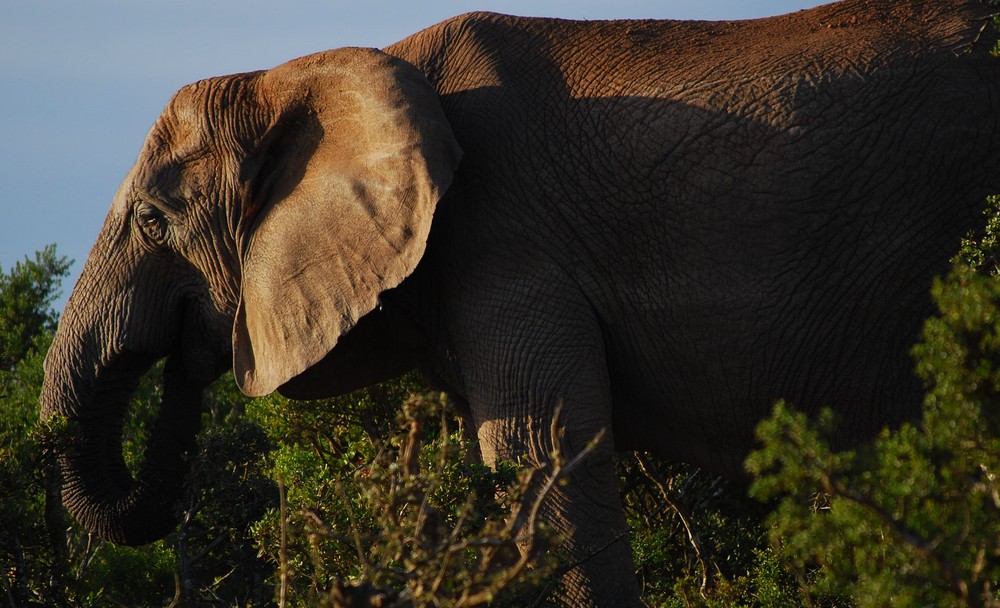