The Tweedles (Dakhla to Nouadhibou)

Nov 22nd, 2010 - The next morning our driver collected us around 7 am and drove us to a café for a morning nibble. It was here we were introduced to the other passengers in our vehicle, two brothers from England. We were being dropped off in Nouadihbou while they were being driven all the way to the capital, Nouakchott. They were merely planning to whiz through Mauritania on their way to Senegal for a bit of camping. Camping vacation in Senegal? Okey dokey.

After some cordial exchanges I began telling the story of the Frenchman who traveled all the way to the border of Western Sahara/Mauritania sans visa and was summarily rejected by immigration officials. The jolly ole English blokes suddenly began looking a bit like the Brothers Grimm. They did not have a visa. They believed it unnecessary. At first I stuttered and then reiterated my 'you never know until you try' philosophy but also shared what I knew of the current situation. The policy on the border of Western Sahara and Mauritania is currently somewhere between 'No F@#$ing Way!' and 'Go F Yourself Furiously!' according to current intel. Not quite how I put it but I did try to gently bring the point home. After all, better to turn back at that point rather than plod on for five or six more hours south. They (as in Mr. Dee and Mr. Dum) were willing to take that chance. Please reference this post's title.

So off we went. My visa anecdote sent what appeared to be tremors of foreboding across the Tweedles' faces. They were clearly lost in a flurry of circumspection. Meanwhile, poor Leslie was the proverbial meat in the Tweedle sandwich as she found herself pinched between the back seat dynamic, albeit big-boned, duo. As for me? I sat shotgun and let my thoughts wander across the desolate landscape that characterizes Western Sahara.

Every so often we would stop at a Moroccan security checkpoint so our driver could emerge from the vehicle and grease the wheels so to speak (or so he claimed). Whenever he returned he would mutter something like 'Police, bad! Fuuuuh!' in broken English and carry on. Not a happy camper. It was somewhere about this time that the more outspoken of the two Tweedles began indulging a nascent delusion. He seemed to think that getting a visa should not be an issue as they were merely passing through to Senegal, they had British passports, they'd read it was possible, our driver had not told them they needed a visa (he had actually checked ours to be sure we had them), they were British, so on and so forth. I tried to be optimistic but I had a sneaking suspicion they were in for a severe disappointment. For the most part I kept my misgivings to myself. No turning back at that point anyhow.

Negotiating the Moroccan side of the border was fairly painless but by no means seamless. First we showed our passports to a man dressed in plain clothes sitting outside a booth. For some inexplicable reason we paid him 5 dirhams and then moved on. Next it was two Moroccan soldiers across the way that took a gander, said hello, and ushered us onward. Then we were stamped out of the country followed by a forty five minute wait next to our taxi while random guy after random guy wandered over and asked us identical questions. Some had uniforms. Some did not. One guy had a latex glove. One guy asked us if we had drugs or weapons. One guy just grunted. One guy made us remove our bags from the trunk and then asked us if we had drugs or weapons. Another guy actually began poking our bags with is finger after asking us if we had drugs or weapons.

Drugs or weapons? Yes, Mr. Moroccan Immigration Guy, I have three eightballs, two pounds of hash, three bottles of GHB, my favorite hunting rifle, a 357 Magnum, and a grenade for each immigration official who foolishly gives us shit. Not a problem, is it? Searching our bags appeared to be a distasteful task in the heat but they could not usher us on before each had a chance to perform some sort of cursory inspection. Did they want a bribe? Dunno. Were they bored? Probably. We finally all piled into the car and drove on……for about ten feet. Then another guy checked the car's paperwork against the license plate. Off again…..for another six feet. Now two more military men checked our passports for the bazillionth time. It was just long enough for one of them to flirt with Leslie (after inquiring as to whether or not we were married of course…How you doin'?). And we were off gain…..

To the customs shack (about fifty feet away). As we stood near the car waiting for our driver to take care of the formalities the outspoken Tweedle began cultivating his delusion. Why would the Moroccans stamp them out of the country if they were not certain to receive a visa from Mauritania? It must be so. After all they had British passports, right? It might be different because we were Americans. Uh-huh. Firstly, let me tell you why the Moroccans would stamp them out of the country: Because they don't give a camel's asshole about their chances of getting into Mauritania! They know you can easily get back into Morocco. And what the hell did our passports have to do with anything? We had visas for Allah's sake!!!!

Customs cleared. We ventured into the 5km no man's land between borders and began to wonder if this were not the place where Mad Max built a Thunderdome (I didn't see it). As you leave the Moroccan side you encounter a group of people standing around waiting for…..something. Perhaps, they were either offering or waiting for a ride to the other side. There is no road between. It is merely a well-worn track through sand, scrub brush, and exposed rock.

Thinking of veering off the path? Don't. There are landmines everywhere. At one point Mauritania was also involved in the Western Saharan land grab. The scene is also littered with junkyard quality vehicles and refrigerators. Refrigerators? I have no idea. The vehicles were probably left after whoever brought them there failed to gain entry to either country due to lack of correct paperwork or because of a failure to satisfy the tax burden resulting from bringing a car into the country. Apparently, Mauritania has a vibrant black market for cars. If you can get through you are likely to make quite a profit on a vehicle purchased or stolen in Europe. Case in point: While we were crossing we saw a gentleman changing the license plate on his SUV. Upon seeing this our driver merely replied, 'business'.

After a few minutes we made it to the Mauritanian side and, following a brief wait, strolled into immigration shack #1. Although I was told that getting a visa at the border was impossible by a gentleman peddling his guide services I was surprised to see that the Tweedles made it past the first shack without a problem. For a moment I thought they might actually make it. By this point Garrulous Tweedle was starting to annoy the snot out of me. The delusion had taken over as he started reiterating that they only wanted to pass through to Senegal, they had British passports, why wouldn't they let them in so they could go to the capital and get their visa there, perhaps they could call the British Embassy, blah, blah, yaddy, yaddy….Get a grip man!!! His justification boiled down to: We're Brits. They just gotta to let us in! They just gotta! Bloody hell!

Alas, it was not to be. The guy in charge at the last checkpoint before entering Mauritania explained to them that he could not stamp their passport without a visa. This did not make them smile. I tried not to buuut...

So our driver set them up with a vehicle heading back into Morocco. They had actually paid him to get to Nouakchott so I am not exactly sure how that all worked out. I am certain he was fully aware that they had little chance of getting in when he agreed to take them but they probably convinced him that they did not need a visa. The immigration agent told Leslie that people were being bounced back on a frequent basis.

How about some background? The two Tweedles had a three week vacation. They were spending one week traveling to Senegal, camping there for a week, and then spending another week traveling back. Right. Talky Tweedle told me that the British dole was enough to live on currently but once they reduced it by 40 euros he would need supplemental income. Right. They told Leslie if they did not get into Mauritania they would probably just camp in Morocco. Right. They seemed about as suitable for camping as I am for space flight. Right. They both spoke French but failed to do so even when it might have assisted their plight. Right. Yes, I'm probably an asshole for bringing all this up. Right.

I would have taken more pics but border folks can get a bit ornery about photography. Yes, they can. 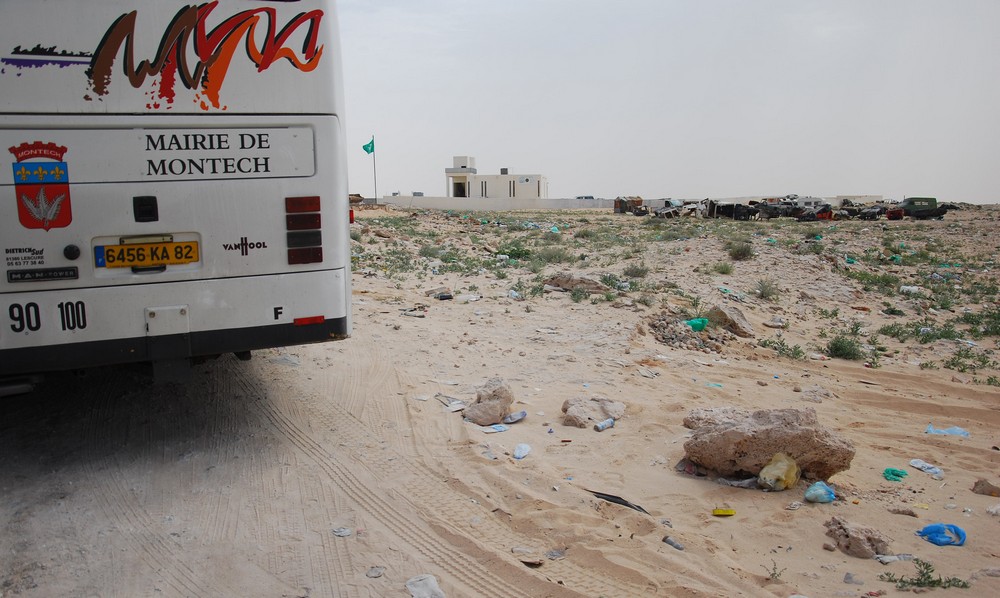