Into the Nothing (Hobas, Namibia)

April 19th, 2011 (February 2011) – We settled in the Northern Cape village of Springbok for a couple of nights. Our goal was a camping frolic in Ai-Ais/Richtersveld Transfrontier Park described in the Lonely Planet as ‘a seemingly barren wilderness of lava rocks and sandy moonscapes studded with semiprecious stones.’ How alluring. The Spark was clearly not going to cut it so we looked into paying an agency to take us in or, alternatively, renting our own 4wd. It was not to be. 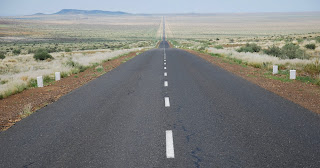 The agency’s driver was out of town and although the women offered us one of her 4wd rentals she actually discouraged us from going. Not only was it extremely hot for the time of year but she suspected the atypical volume of rainfall they had received likely made the road situation difficult. She suspected right. We called one of the park offices and were told that many of the roads were impassable with any vehicle and that the route into the park was very limited. Shiddle-shit!

So we stayed two nights in a local B&B that was not only extremely nice but also of superb value (the holy grail of accommodation at last!). The room was half the price of everything we’d seen up to that point and twice as big. We decided to enjoy two nights of R&R in preparation for our foray into Namibia. We're worth it.

The border crossing at Noordoewer was painless and the guards were rather friendly. There was an awkward moment during a routine bag search when one of the guards mistook tampons for cigars (who hasn’t?). He erroneously believed he was searching my bag as apparently men are not permitted to search the belongings of women. Good to know. Next time I want to smuggle drugs and firearms across the South Africa/Namibia border all I need is a female with a large rucksack. Always good to have a ‘Plan B’ employment option. 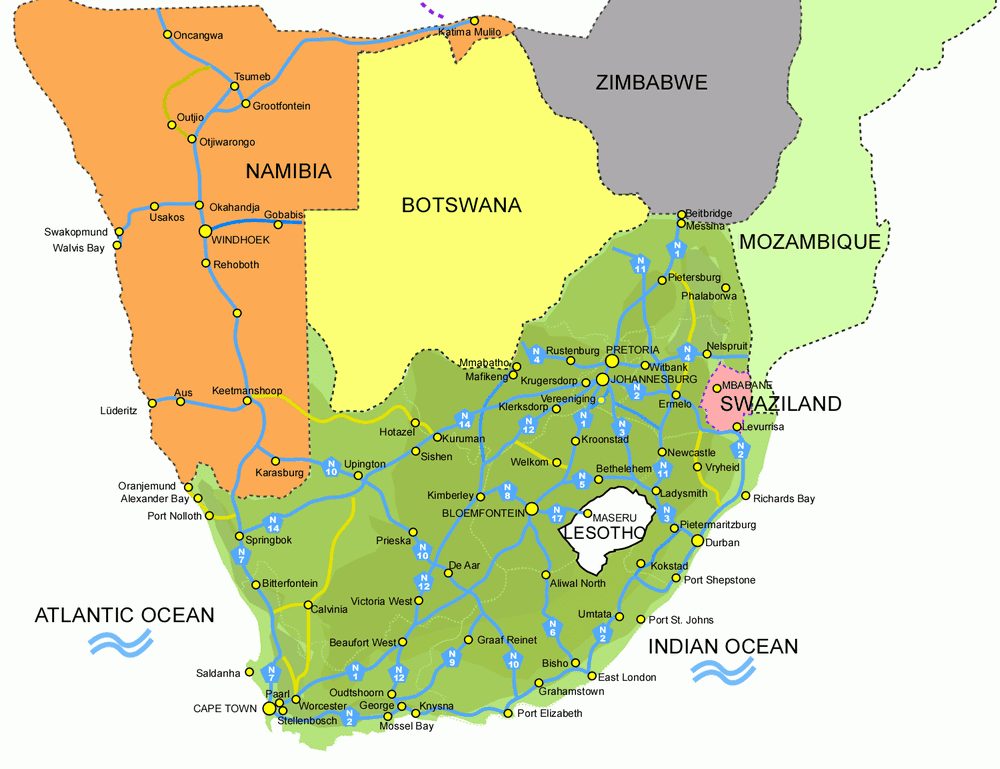 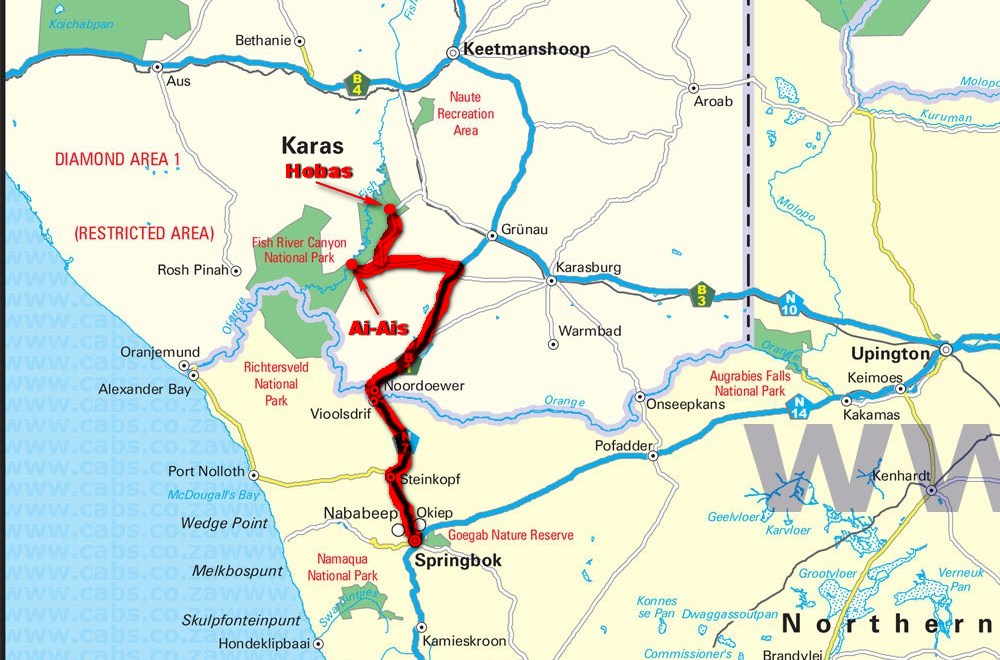 One of the first things you notice shortly after entering southern Namibia is nothing, a shitload of nothing. Nothing is everywhere. It surrounds you, envelops you, makes you believe for a moment you are truly alone. Sure you might pass a car or two or even see a forlorn road crew maintaining the road but this somehow only adds to the vision, as if those you encounter are a just a few of the fortunate survivors. You even exchange head nods and hand waves in tacit recognition of each other’s perseverance.

Fish River Canyon. That was our first destination and provided us with a second chance at Richtersveld as the region forms part of the park on the Namibian side (hence the transfrontier designation).  I made a brief detour to investigate an alternate route to the region but decided to maintain the course we previously plotted on the map. I thought I had driven through shallow puddles of water on the side road but it was actuality newly poured road sealant that coated the Spark’s undercarriage and splattered all over the side. Thank goodness our car was white…damn it. Water? The road was baking in the sun without a trace of moisture in any direction. Dumb-dum-dum-duuuuuumb! The road crew we encountered minutes later confirmed the hypothesis. Awesome.

Our first stop was at the Ai-Ais campsite at the southern end of the park. The road there (along with many of the roads in Namibia leading to anything you might want to see) is a combination of sand and gravel. The site is famous for its hot springs which I am sure are lovely. They certainly look lovely. Problem is summertime in the park is a bit balmy so a steamy dip is not something we found all that appealing. We arrived around 1 pm, paid the camp fee, and parked at one of the many open spots. Actually, they were all open. No one else was around.  Why would they be? We sat there for a bit, ate lunch, and then wondered why the hell we were there. Foresight can have its utility.

We decided to depart and head to the northern end of the park. Even though we’d already paid it was possible to apply the fee to the campsite run by the national park service in Hobas (in the north). So we hopped along and encountered more of that spellbinding nothingness that became part and parcel of our Namibian experience. In Hobas we arrived and erected our tent just in time to witness yet another biblical lightning storm unleash its wrath. The gods were angry that day my friend. Due to my lack of prescience with tent placement we also watched a lagoon form in front of our tent and giggled at the small stream running beneath it. I decided to emerge from Sparky and check the status of our abode….in my underwear and sandals (no need to get my clothes wet). I was happy to discover that it actually was waterproof after all. Yippee. 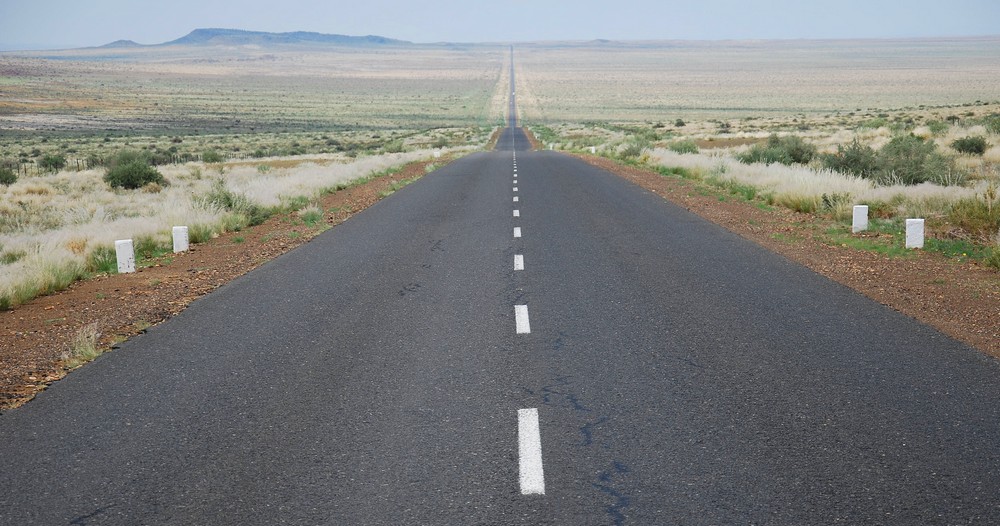