Not Quite A Country (Abkhazia, Georgia/Russia/???) 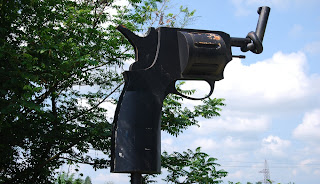 July 18th, 2010 – Seeing as summer is a lovely time to visit breakaway republics I decided to make my way to the Republic of Abkhazia, a quaint little renegade society scrunched betwixt Russia, Georgia, and the Black Sea. Wanna go? Just fill out an application at the Abkazian Ministry of Foreign Affairs (MFA) website and wait for an authorization letter. That letter will get you across the border. Once you arrive in Sukhumi head to the bank, pay the twenty dollar visa fee, and take your receipt to the MFA office to receive a shiny new visa. So easy even an American can do it.

Took the night train from Tbilisi to Zugdidi in Western Georgia. Four person birth. Windows didn't open. No aircon. Beginning of July. Snails pace. Yes. I arrived at around six o'clock in the morning, conducted the normal haggling ritual for a taxi, and made my way to the border. My driver spoke nary a word of English and was clearly confused by the idea of me heading to the Georgian/Abkhazian border. I arrived at this conclusion when he drove me to a house of a friend or relative in order to find a translator at 6:30 am. It turned out to be a young girl no older than 14 that he roused from sleep in honor of the occasion. She never did utter a word of English. Luckily, her interpretive skill became superfluous as at some point I managed to convey my intentions. To the border I say!

To be or not to be a country. That is the question. Abkhazia used to be a part of Georgia. Most of the world thinks it still is. Only Russia, Nauru, Venezuela, South Ossetia, Transnistria, and Nicaragua disagree. Why these countries? Well, Russia supported Abkhazia's break in the first place. Hugo Chavez is a douche bag. South Ossetia and Transnistria are breakaway republics themselves so a mutual back scratching only makes senses. Daniel Ortega (Nicaraguan president) used to be a Marxist guerrilla with a penchant for playing touchy grab ass with the former Soviet Union.  And what about Nauru? (pronounced nah-oo-roo or more appropriately nah-who-roo)? Why would an island nation in Micronesia give a flying rat's ass about Abkhazia? Because Russia paid them fifty million dollars to care. [Author's Note: In 2011 the island nations of Vanuatu and Tuvalu joined the rebellion.]

During the Soviet era Abkhazia was considered to be an autonomous republic within the borders of Georgia. It was given this status by Stalin although being true to his style he sought to undermine its autonomy by encouraging mass relocations of ethnic Georgians and Russians to Abkhazia in order to dilute the population of Abkhazians, which he mistrusted. Who the hell did that asshole trust? He suspected the multitude of being loyal Turks even though many Muslim Abkhazians fled the Tsarist Russian controlled region before paranoid Joey was born, between 1864 and 1878. By the time the Soviet Union collapsed it is estimated that only 17% of the population was ethnic Abkhaz.

The ones that did remain were never particularly pleased under Soviet rule and few viewed themselves as part of Georgia. Georgia (to include autonomous Abkhazia) became independent of the defunct U.S.S.R on April 9, 1991. However, in August of 1990, Abkhazian separatists announced their succession from Georgia and continued upon their defiant path to independence by placing control of the banking system, customs, border operations, the police, and the military under their sole authority. Not surprisingly, war was soon to follow.

The causes of the 1992-93 Abkhazian War are extremely complex and far too numerous to expand upon here. Suffice it to say that a lot of very bad people did a lot of very bad shit (on both sides) which led to the ethnic cleansing of an estimated 250,000 ethnic Georgians (see Human Rights Watch report here). Russian did nothing to help matters. In fact it is widely believed that Russia (either the government itself or through various rogue elements) was behind much of the instability that occurred after the fall of the Soviet Union in not only Abkhazia but everywhere war broke out in the former Soviet states. Naughty, naughty Rooskies. Like reading? Check out “Georgia Diaries” by Thomas Goltz. Great writer. Intriguing story. You want it.

That was not to be the end of it. Flash forward 15 years. In 2008 Russia solidified its influence/control in Abkhazia by seizing an opportunity presented during the South Ossetia War. It took possession of the Kodori Gorge as well as Poti, Zugdidi, and Senaki near the Abkhaz/Georgia border (Georgian side). Although it would eventually withdraw from the cities the gorge was never relinquished even after the cease fire. What you have as a result was/is a political shitstorm. I could almost smell the poo as I crossed into Abkhazia.

So I made my way to the border. My first stop was a Georgian police post. They too seemed befuddled by my itinerary. Who wouldn't be? I'm not a Georgian refugee returning to the border lands to tend crops and livestock and I am not working for an aid organization. I must be a journalist, right? Negative. Just an ignorant tourist. They wanted to see my Georgian visa which I could not show since I do not have one. American citizens can stay in Georgia for close to a year without getting a visa. Apparently, no one told those dudes. As Georgia does not recognize Abkhazia's independence they do not stamp your passport when you enter Abkhazia because in their view you are not actually leaving Georgia. No matter, I was eventually ushered on my way towards no man's land, the Inguri Bridge (named for the river it spans).

And the Georgian soldiers on the Georgian side of the bridge? Bewildered. Even though I offered they deemed it unnecessary to scan my passport. The bridge has a bit of an apocalyptic feel as you make your way across with only a handful of people trickling to and fro at any one time, most of whom I assume to be Georgian IDPs (Internationally Displaced Persons) with permission to enter their former land to maintain crops and livestock. There is a lone horse cart (the Georgian Abkhaz Express) shuttling folks across the bridge. Remarkable. The scene was one of haunting tranquility although I later discovered that a Georgian policeman was shot in the border region nearby two days before I arrived.

'Everyone is kneaded out of the same dough but not baked in the same oven.'
-Yiddish proverb 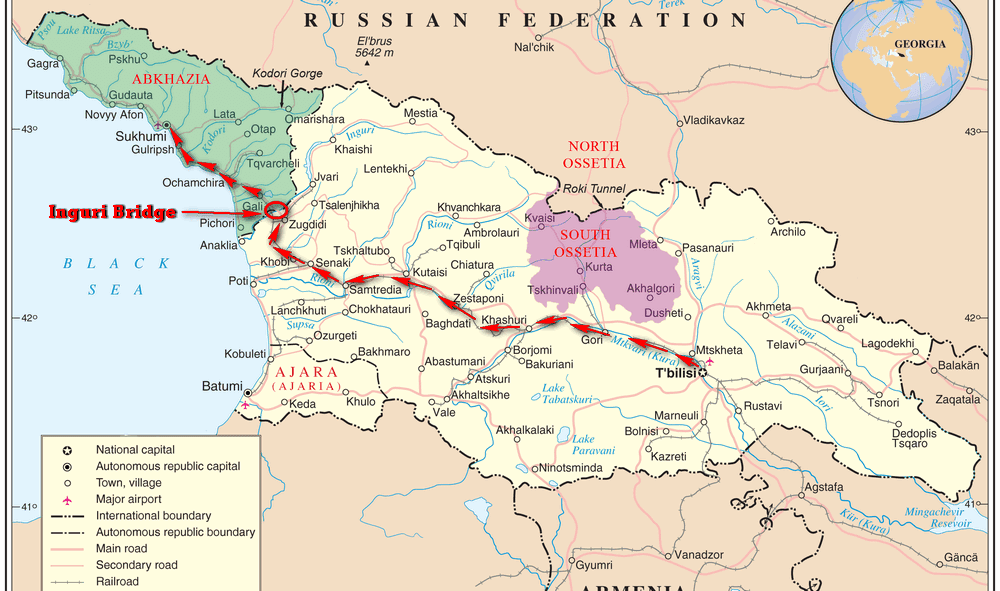 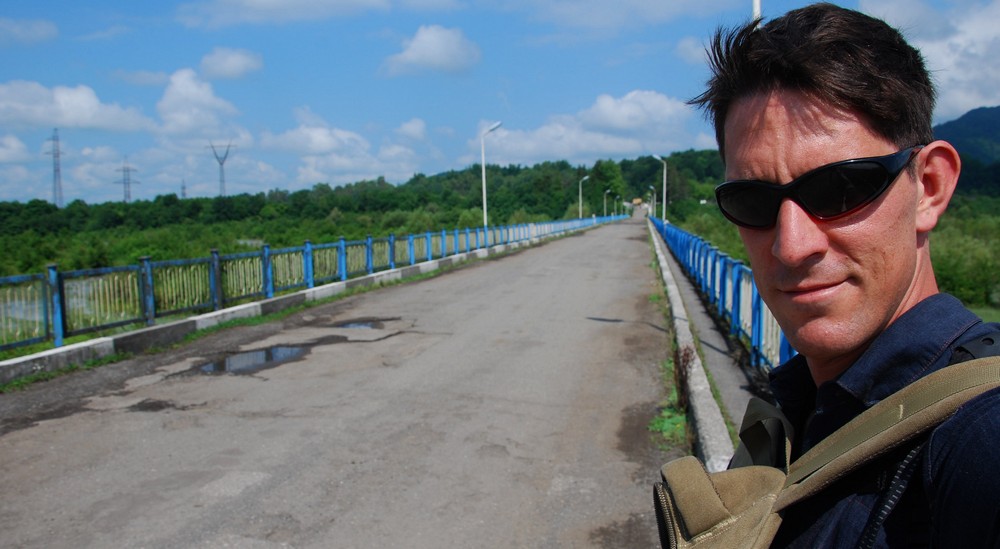 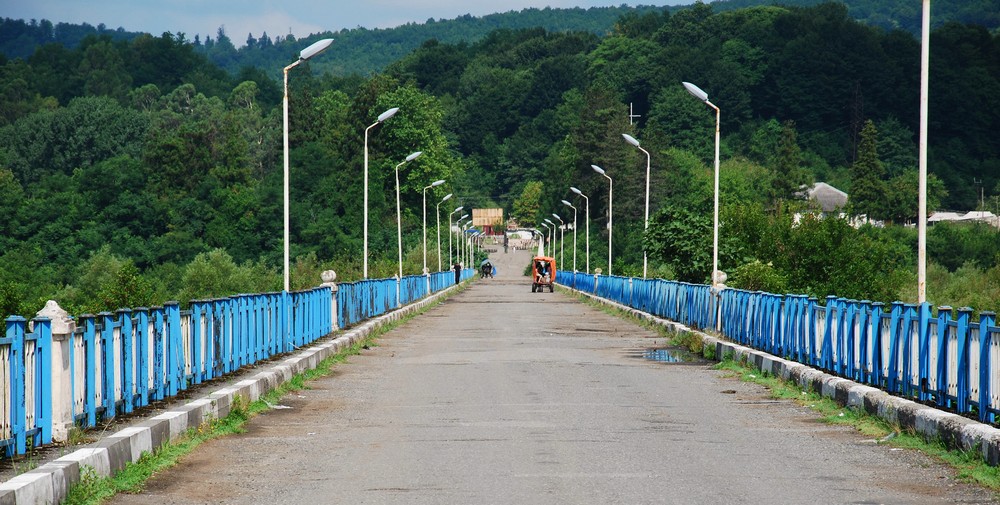 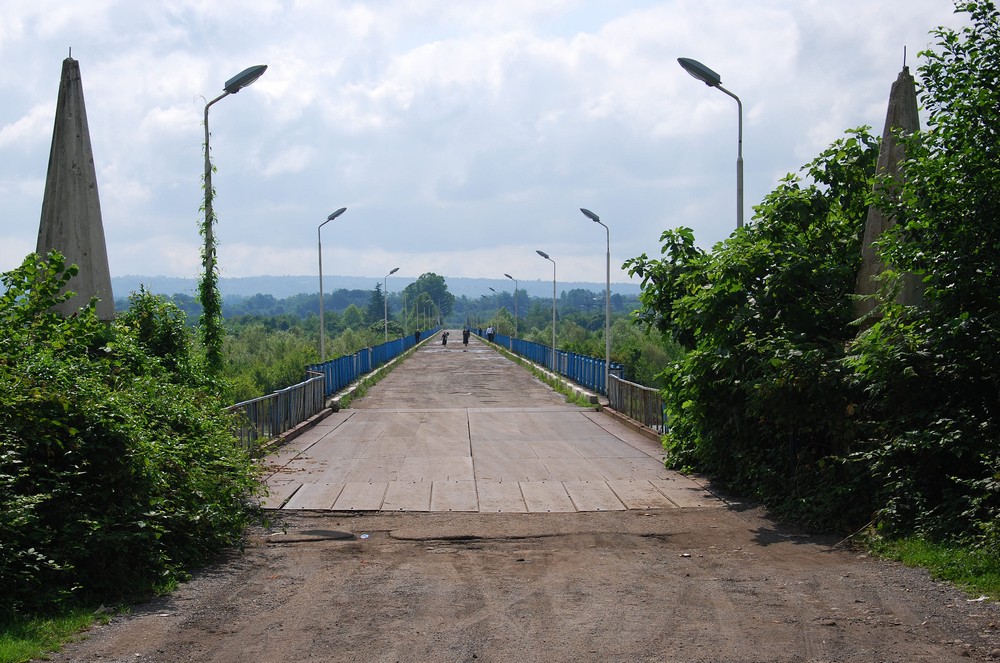 Crossing into Abkhazia was fairly seamless taking only minutes to pass through border control. I presented my letter from the foreign ministry and was told (in grunting Russian) to obtain my visa in the capital, Sukhumi.

So now I had to get to Gali just across the border in Abkhazia where I could then catch a bus to the capital. In an inexcusable lapse of foresight I forgot to obtain rubles before entering Abkhazia. Big Fat Dummyface. To make matters worse very few people in general and nobody at the border in particular spoke English. I found myself at a distinct bargaining disadvantage. So the cab driver bilked me for 500 rubles (around $16 but it turned out to be more as he had no change) for a ride to Gali.

The ride from the border to Gali has the distinct aura of a derelict war zone (fancy that) complete with a neglected road and plenty of dilapidated buildings for decoration. I cannot be sure but I think my driver blames the Georgian president, Mikheil Saakashvili, for the sad state of the road. Not entirely sure why that is. I am fairly certain that the decrepit state of Gali and eastern Abkhazia results from the fact that most of the people who used to live there were ethnic Georgians. Does not appear to be a whole lot of folks there now so it seems there is little reason to rebuild. In some ways the region is a quasi monument to Ahkhazia's victory.

So I arrived in Gali. From the looks of the place I am not sure anyone would notice if a bomb were dropped in the center of town. The driver brought me to the bank to change money but, being Saturday, it was closed. Super. This led to the bilking I mentioned above. I then bordered a bus for Sukhumi and although I made every attempt to ascertain the cost of the journey failed to do so. I later found out why.

The closer you get to the capital the more improvements one begins to see along the way but there are still plenty of signs of despair. I wish I had taken pictures of Gali and the surrounding region but I thought it wise to move on quickly since I had little idea what the hell was happening and I did not think it prudent to linger, especially when I was uncertain as to the frequency of transport from Gali to Sukhumi.

When I arrived in Sukhumi the bus stopped in front of a bank so I could acquire cash. Closed. After my failed attempt the bus driver and his minion attempted to extort $50 for the ride while the occupants of the bus waited and looked on. I gave them $10. I still got screwed. So much for a warm welcome. Stupid assheads.
Posted by Rich at 7:57 AM