Foothills of the Caucasus - Part III (Near Zaqatala, Azerbaijan)

May 21st 2010 - So we spent a night on the riverbed crossing our fingers that on the morrow the amphibious vehicle that brought us in would take us out. You know what they say: Wish in one hand, shit in the other. At around 11:30 pm I awoke to a light shining from the distance. I cracked the tent flap to see headlights approaching from the direction of the mountain village from whence we started our trek. I roused Amy and we both sat there mesmerized by what was unfolding. What the hell were we looking at and what the hell was a vehicle doing trolling the riverbed around midnight? Besides being dazed and confused we were also…..well…scared a little poopless. 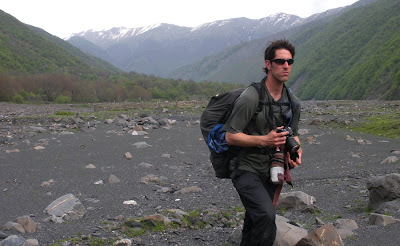 It was like an evil beast that had been stirred from its dark lair and was coming to engulf all that was in its path. Had we been more on our game we would have got dressed and attempted to wave down said leviathan which we assumed was headed towards Zaqatala. Instead we just stared like startled deer frozen by the lights of oncoming traffic. That was probably for the best. From what I could tell it was an antiquated hauling truck used to gather rocks and gravel from the riverbed and was probably driven and staffed with one or more intoxicated mountain men. I cannot imagine what they were thinking when they happened upon our neon orange tent. I am a bit surprised (and relieved) they did not stop to inquire. No doubt they had probably heard of our incursion into the area.


We arose the next morning to find our hopes of rescue dashed. No vehicle appeared at 8 am. We would be forced to huff it on foot. So for the second time we engaged in river crossing hijinks. The morning was spent in phases. I would recon an area for suitable places to cross (this time I wore shorts) and then we would doff our footwear and waddle through the icy waters. And I do mean icy. In the beginning it was actually painful. Luckily, it only took about a half hour for my feet to adjust (by adjust I am referring to a blissful state of numbness). When we finally surmounted a series of short crossing points we donned our footwear and proceeded on, thinking we would be able to walk all the way to pay dirt. Not bloody likely.


We were to hit another wall as the snaking of the river once again pushed the waters flush against the side of a cliff. And due to the confluence of streams upriver we were now facing a much more precarious scenario. We did have assistance….sort of. On the other side were three young Azerbaijani soldiers (border patrol) posted near the village where we had received our minor interrogation on the way in. They approached the water's edge and watched as I tried and failed to find a suitable pass. Thus began our joint effort to surmount the river wild. We both scanned our respective sides for an opening until Young Soldier Number One began beckoning me to the side and instructing me to give it a shot in the area of his designation…..which happened to be the hairiest, most dangerous part of the river. I just stood there in awe as he beckoned me across. I began furiously pantomiming 'What the f**k??!!' while pointing at the swift moving waters, all the while doing my impression of me falling down and being swept away. He continued to usher me across. I continued to ignore him.


I returned to the place where Amy was watching and we both stared on in disbelief as Young Soldier Number Two began disrobing. He was going to show me how much of a little girl I was. I was going to watch him die. I returned to the river bank and in my most accomplished 'what the f**k are you thinking you crazy sob are you out of your mind' sign language tried to dissuade this course of action. Amy and I realized that we were possibly skirting the edge of an international incident. Imagine the fallout from the death of a soldier attempting to rescue two tards from themselves. Not good. Not good at all. Luckily, not long after entering the icy waters Young Soldier Number Two reassessed his strategy and aborted mission. Pheeeew!!


So we spent three hours trying to cross the river in vain. And the best part is it was completely unnecessary. A shepherd of the sheep herding variety appeared on scene and offered to assist. His first idea was to join hands and cross the river together. Ahhhhhh...no. We vetoed that plan although I found the thought of us dying in that manner mildly amusing. Imagine the border patrol dudes waving as two idiots and a sheep herder get dragged down stream. 'Two Idiots and a Sheep Herder' would be an apt title for a newspaper article I should think.

Think of the orphaned sheep. He then pointed to a trail that traced the cliff above the river. Ummm….trail? Yep, that's right. We missed another trail that would have taken us safely around the angry river in a fraction of the time. Damn us. You'd think the military boys would have mentioned (or at least pointed out) this option instead of watching Richie splash around in the water like a yahoo (Did I mention that I had worn my shoes in the water in an attempt to gain better footing?). But no. And why would the herder's first suggestion be that we risk death and cross the river as opposed to using the trail? I find this rather bewildering.

Mr. Herder Man was also extremely congenial. He even went so far as to ask Amy if I minded him speaking to my wife (we remarried). It is culturally unacceptable for a man to address another man's wife without permission so he was a bit uneasy discussing the situation with Amy. How dare he insult my honor in order to rescue our stupid asses? He is lucky I did not knock his teeth out. The nerve of that man! Imagine if I did not give my permission. Amy would have had to narrate our conversation and we would have had to pretend we were communicating with our minds. As I write this I realize just how much fun that would have been. Next time.

He told us that the trail was easy, kind of hard, not so easy, a bit difficult, hard in the beginning, and then easy. In actuality it was not so bad. He led us as far as he thought necessary and said goodbye. We thanked him profusely and continued on our way. The rest of the walk did involve a few more crossings of shallower water but was comparatively easy. We'd made it and found ourselves back in Zaqatala not long after exiting the river area. Crisis averted. 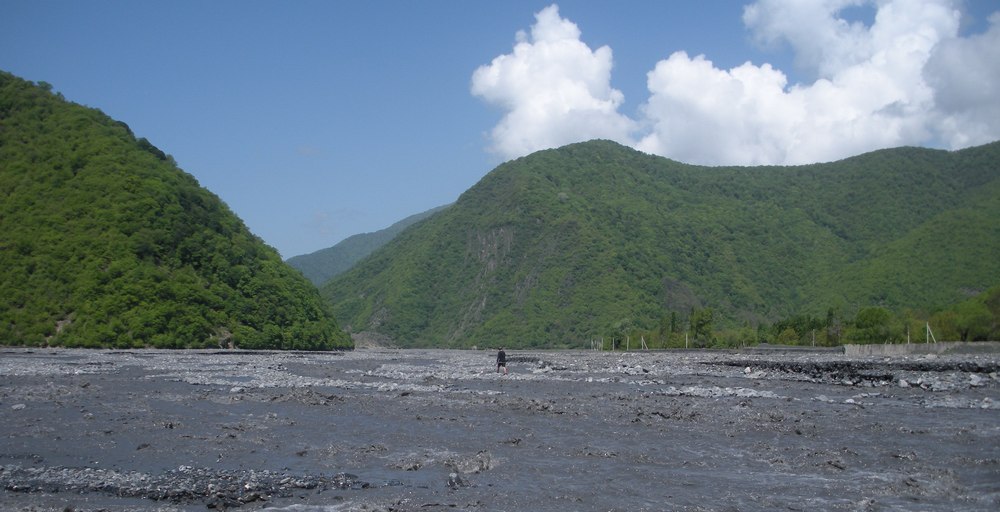 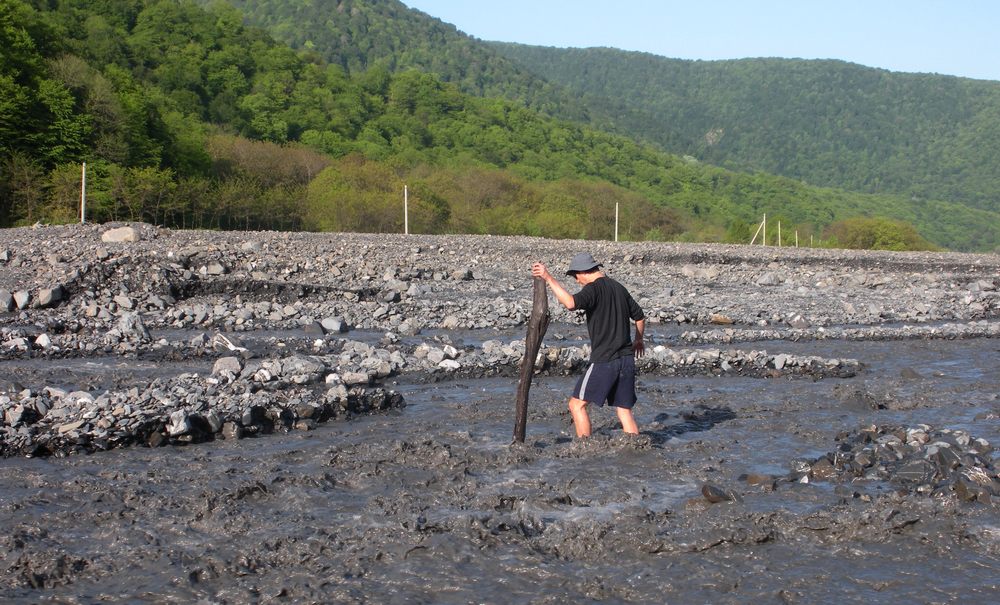 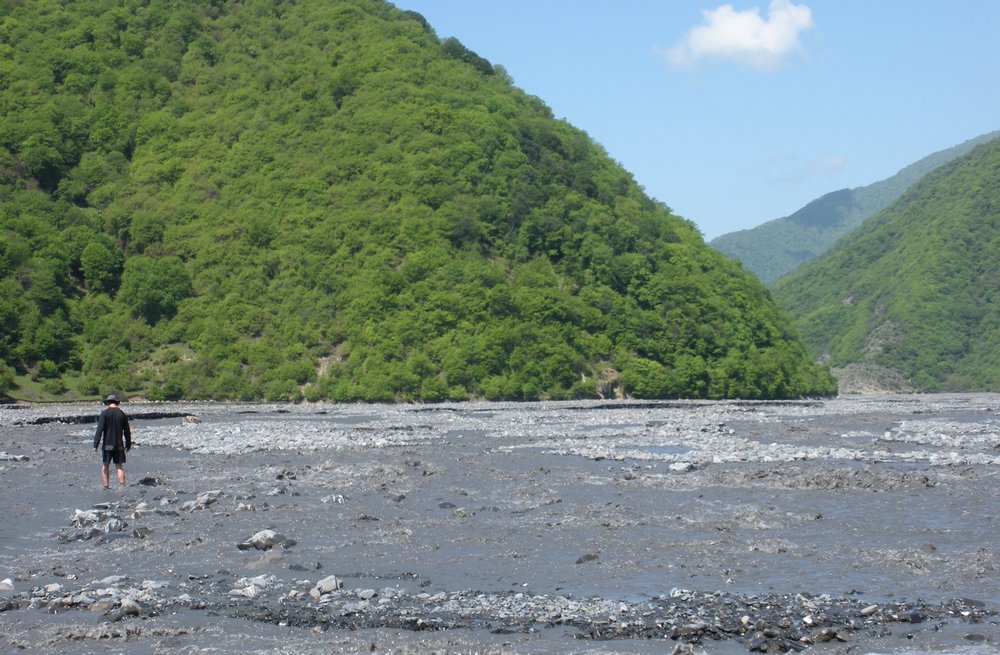 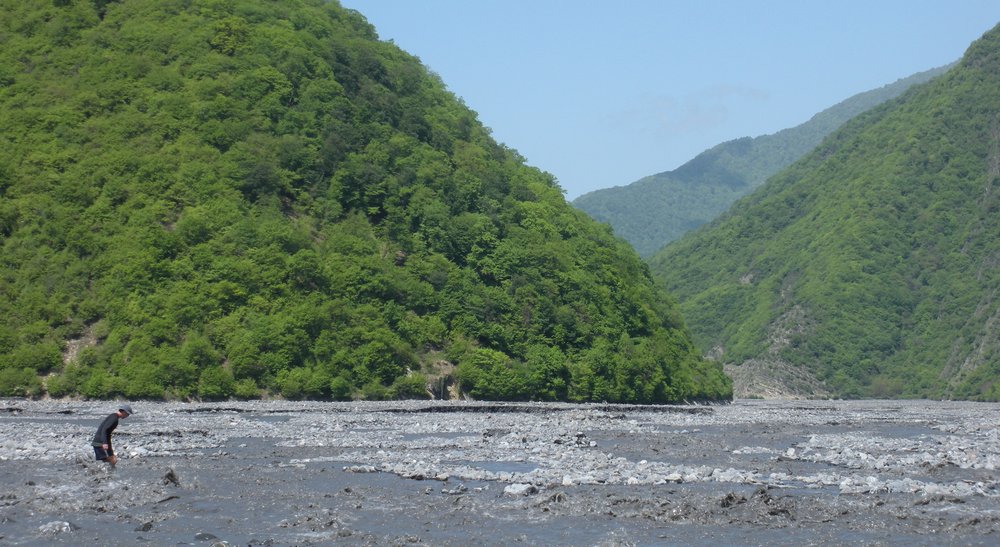 You will do foolish things, but do them with enthusiasm
- Colette
Posted by Rich at 8:13 AM