March 23rd, 2010 - The night I spent in Tengboche was an entertaining one. I met some folks from Ireland, Belgium, England, and the Netherlands. It was the conversation with the young Dutch woman that sticks in my mind. She was traveling alone albeit with a guide and porter. Apparently the guide was…how shall I say…a bit clingy. He was upset with her because they were not spending enough quality time together. Sure.

She was staying at the adjacent guesthouse and because we were at the start of the season she happened to be the only occupant. Our guesthouse was a hotbed of socialization so it is no surprise that she wanted to meet folks. Her guide was not amused. He did not seem to understand that spending all of her time in a dark lodge while having a conversation in broken English was not the Himalayan adventure she was seeking. Imagine that. They had a 'come to Jesus' heart to heart where he asked her if she wanted another guide. Tears were shed….by him. She managed to mollify him and all was well but she was walking an amorous tightrope.

You may think this scenario sounds exceptionally bizarre. It is not. As far as many Nepali men are concerned female westies (as I like to call them) are considered to be the romantic Holy Grail, especially when they are fetching, as the young Dutch lass in fact was. She told me that they had spent the day together in Kathmandu on a sightseeing tour. I explained to her that it probably meant he was in love with her….literally.

I laughed when she told me that he was fond of sitting practically on her lap when they were conversing and believed, erroneously, it might be a cultural thing. Nuh-uh. To underscore my point I engaged a few of the Sherpa guides in the room and had them share their anecdotes. One of them had an Australian girlfriend that was expecting his child back in Sydney. Another told of a guide friend of his that played naughty games with a German woman on her honeymoon trek!!! He served as guide to the newlyweds. The first guide I met in Nepal was having an affair with a Spanish woman he'd met while she and her husband were visiting Nepal. Yep, he was their guide. One of their romantic rendezvous included the outdoor toilet. Be still my heart. Another friend of mine (a Nepali guide) also has an Australian girlfriend that just delivered his child Down Under. While I was on my rafting trip one of my female cohorts played a little bit of slappy grab ass with the safety kayaker (affectionately known as the 'sexy' kayaker). So you see if one Nepali stud can hit the jackpot then who is to say that lightning cannot strike once…twice….threeeeeeeee tiiiiiimes a laaaady? Not me. To be perfectly honest I was hoping for a little bit of slappy grab ass with Team Netherlands myself but considering my degraded state of personal sanitation that was out of the question.

So the next day it was Tengboche to Dingboche via Pangboche (That's lot of '-boches'). A mere three hours and I found myself wandering the area surrounding Ding. Again, my inclination was to keep moving but the region was so enchanting that I forced myself to stay put. Besides, a little acclimatization never hurt anybody.

I arrived at the Valley View Lodge, ate a poopload for lunch, and went for a stroll. Ama Dablam was so close I could almost lick it while Mt. Taboche stood sentry over the valley. Also, just behind the village stands Mt. Nangkartshang, a smaller peak yearning to be surmounted. I heard it calling. Either that or my Schizophrenia was flaring up. I would oblige of course, but not until the following morning. 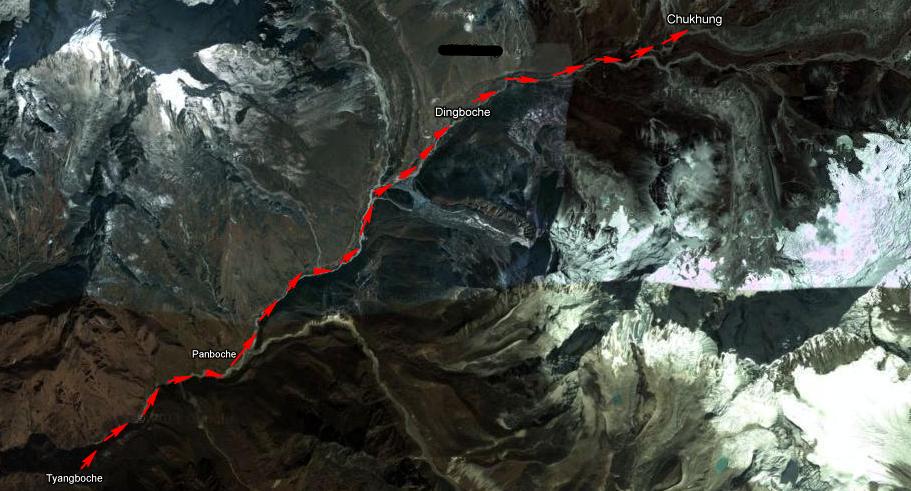 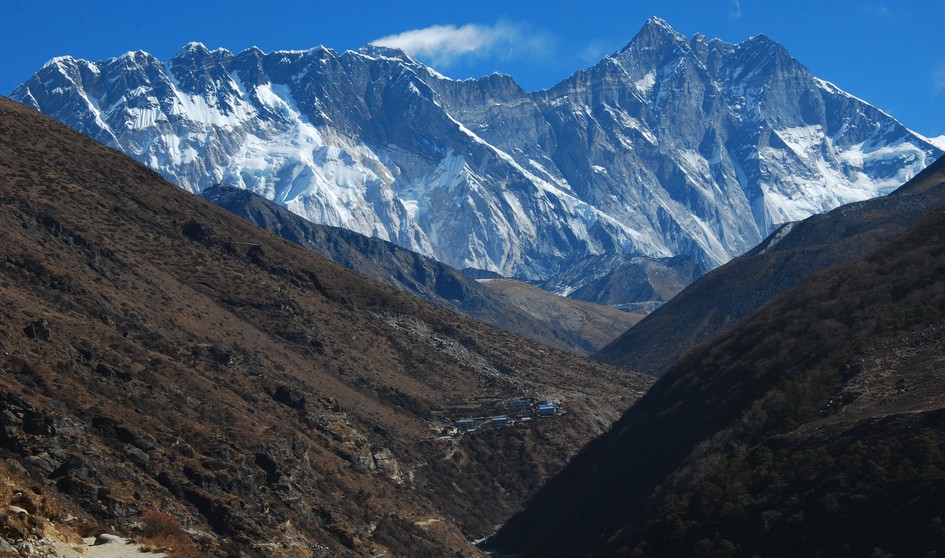 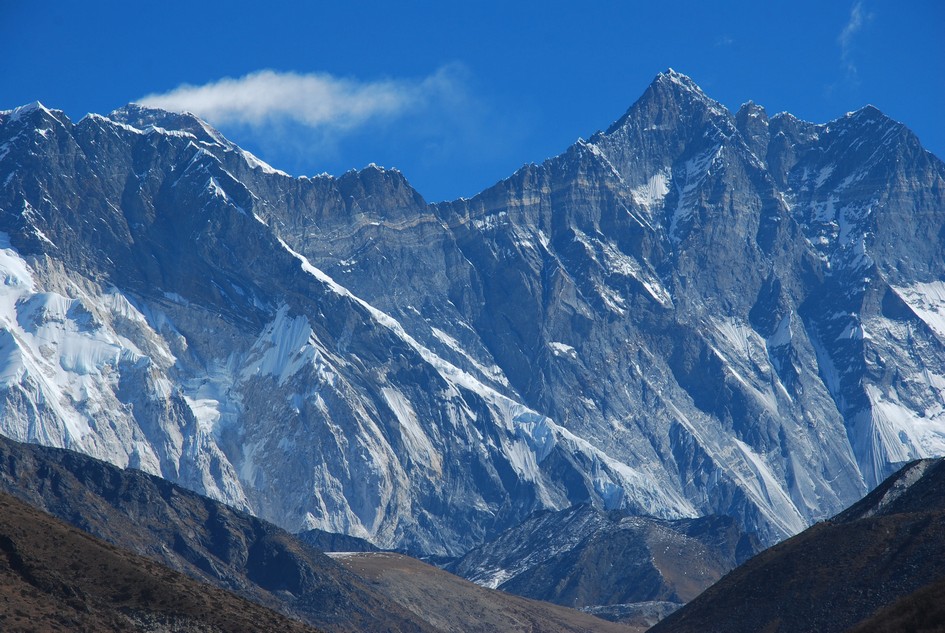 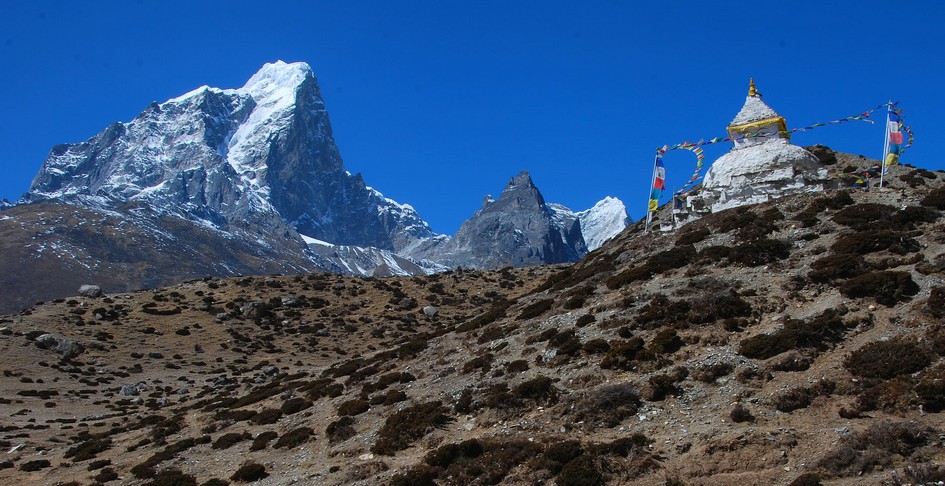 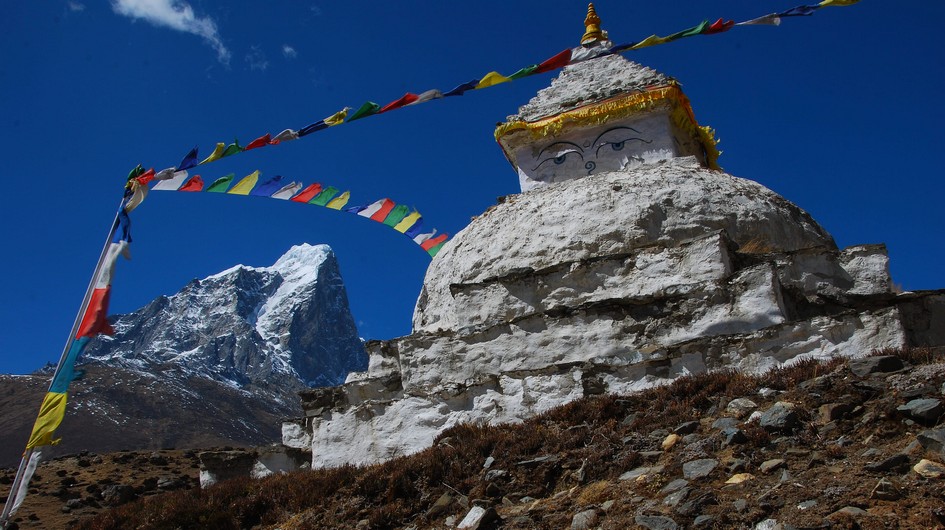 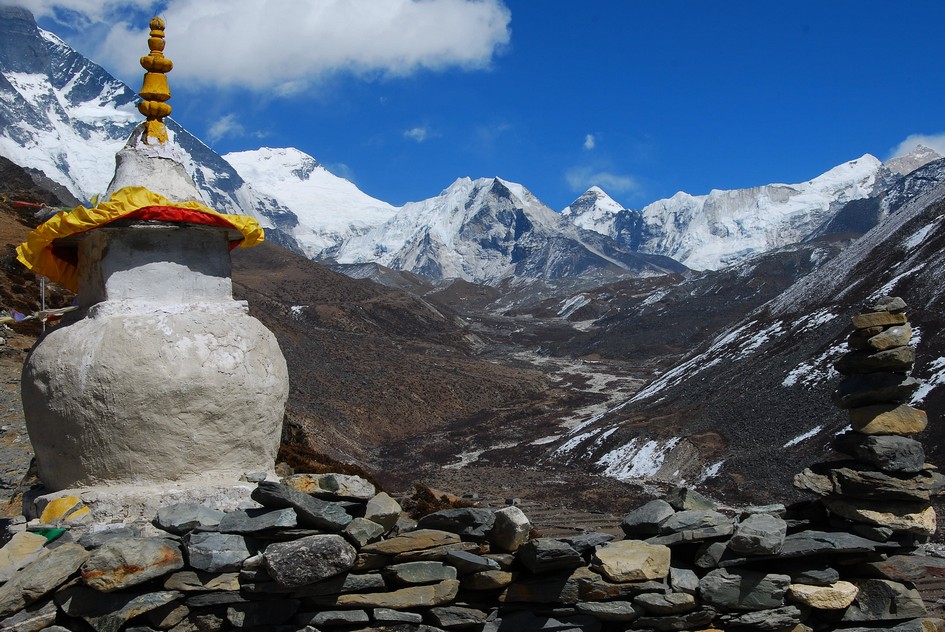 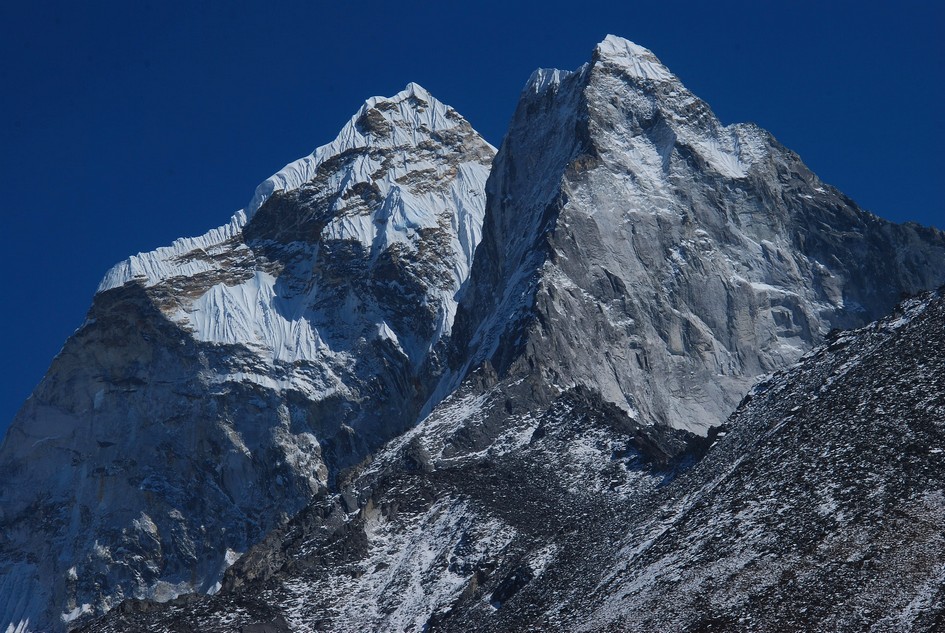 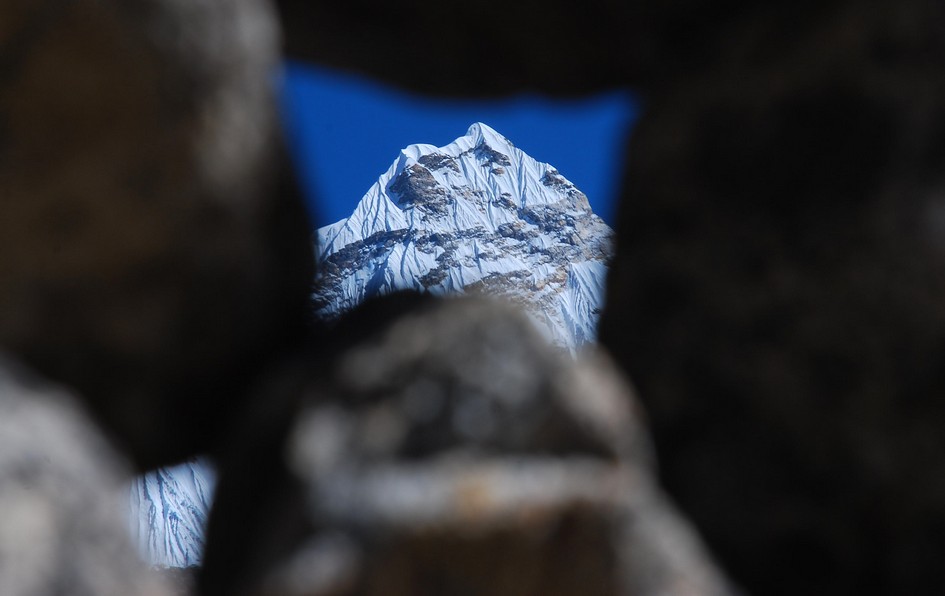 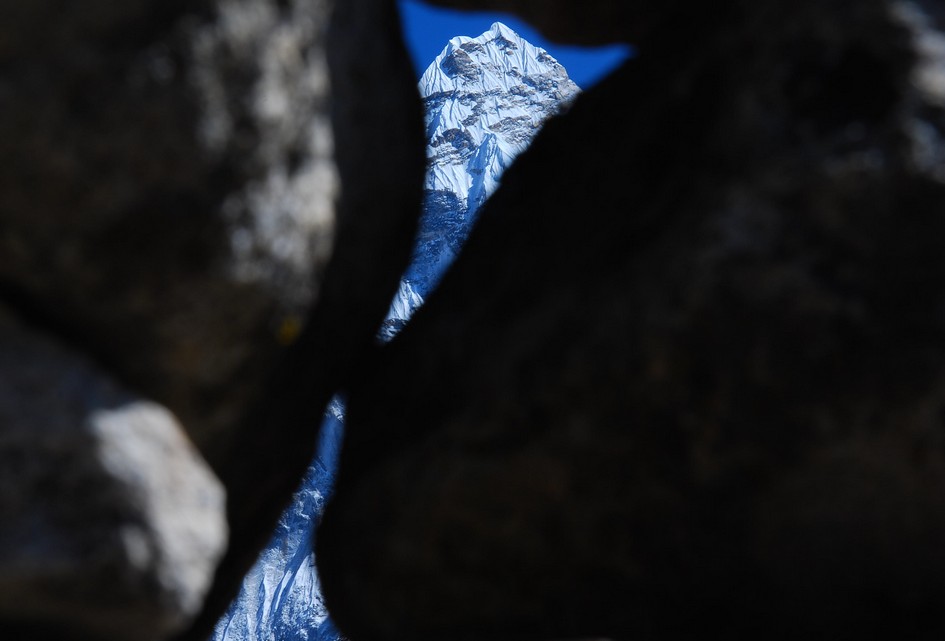 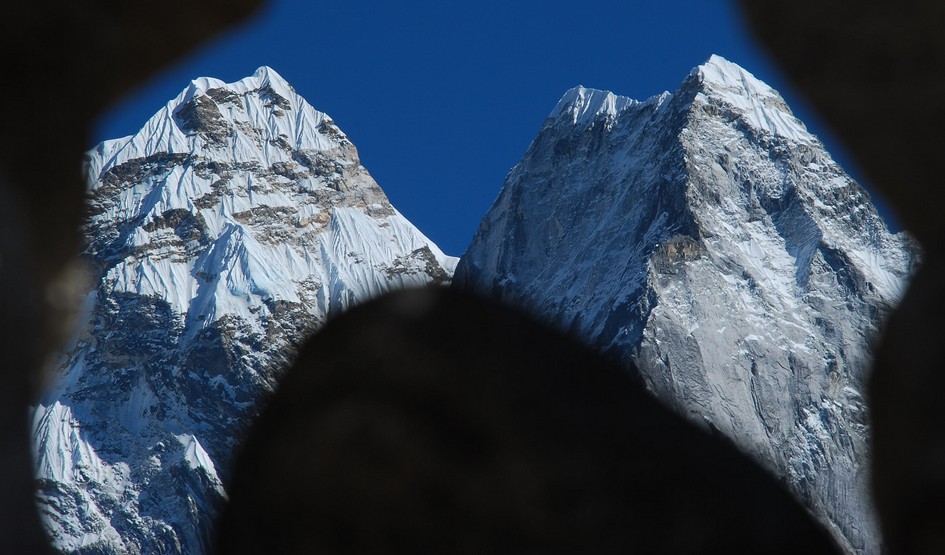 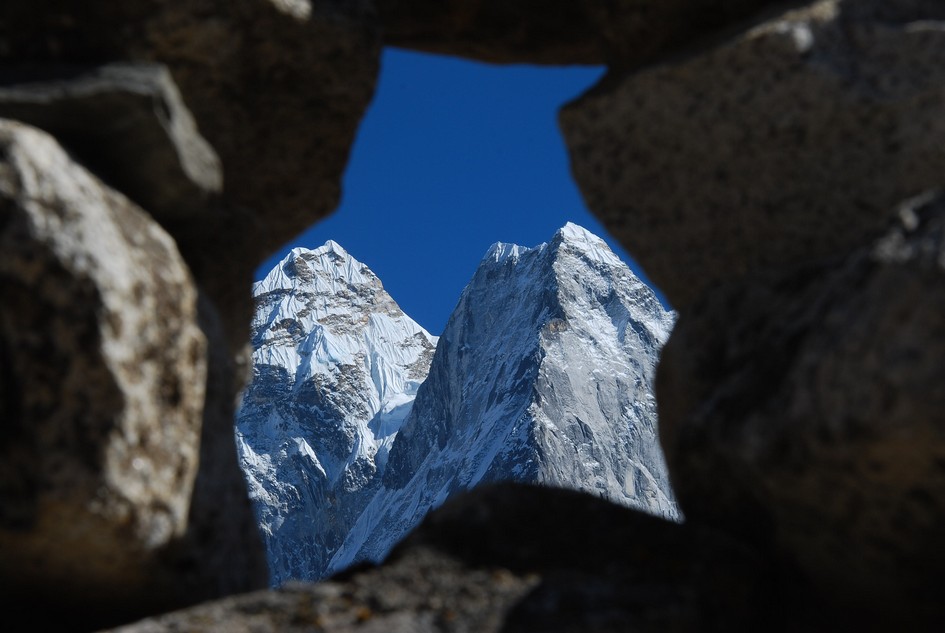 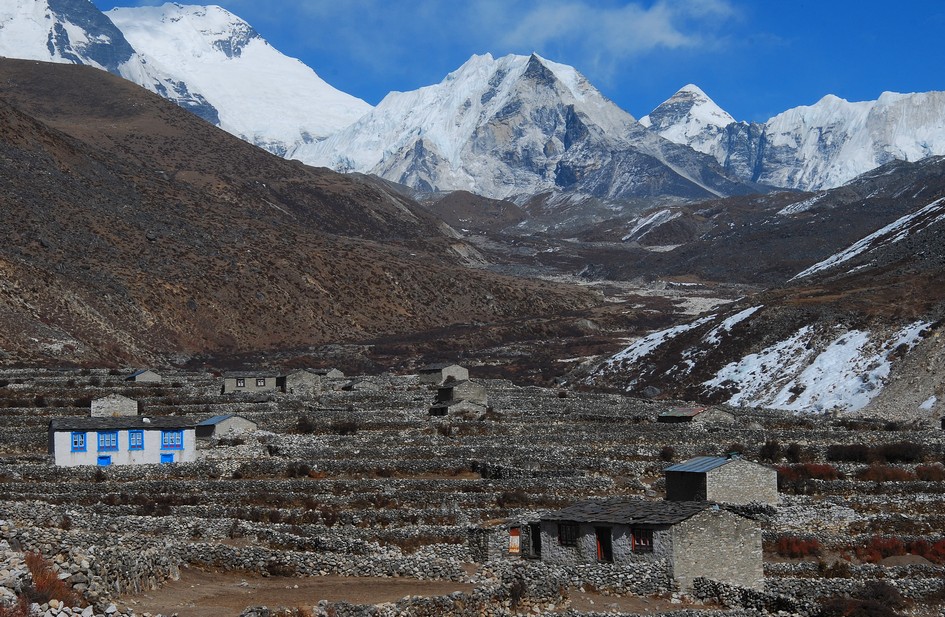 Back at my lodge I experienced what was to become a familiar sentiment from the guides along the trail. There is, at least as far as I am able to detect, an undercurrent of resentment toward those lone wolves like myself that hit the trail without a guide and choose to carry their own belongings. They view it as depriving a Nepali guide or porter of much needed income and those like me as leeching off the well tread paths established by years of Sherpa diligence. There is some merit to that argument. I cannot deny it. However, I spent so much time going from trekking agency to trekking agency trying to convey my specific desires that my head started to spin. No one wanted to listen to my needs (sounds like I was in therapy). Many are so stuck on the standard itinerary that they cannot conceive of doing it any other way. They treat you like a yak waiting to be herded to greener pastures. I am not a yak, damn it! However, if I was a yak my horns would be symmetrical, my wool white and of the finest quality, and I would meander through the hillside with that unmistakable air of yak entitlement. What kind of yak would you be?

At one point I returned to my room to find a unicycle lying against the wall out front belonging to the occupant in the adjacent room. Unicycle Steve was spending a couple of weeks unicycling parts of the trail leading to Everest Base Camp and nearby. That's right, unicycling. This would not be my only encounter with Unicycle Steve (I love saying that). As fate would have we would meet again. Why the hell don't I have a unicycle?

So I arose the next morning and made my way up Nangkartshang (5090 m – 16797 ft). You might find it hard to believe but the view was arresting. It is impossible to avoid the 'broken record' syndrome so get used to it. Alone again and enveloped by the majesty and awe that is the Himalayas. No blubbering this time. I just stood there and tried to absorb the primordial hum. With all that absorbing I forgot to focus on one of my trekking poles and watched helplessly as it cascaded over the side of a cliff making the signature cling, klung, and tonk sounds all the way down. I suppose the local deity needed a sacrifice. Better a cheap piece of Chinese metal than me. If I'd known I was going to make an offering I'd of brought juniper to burn. Maybe next time. 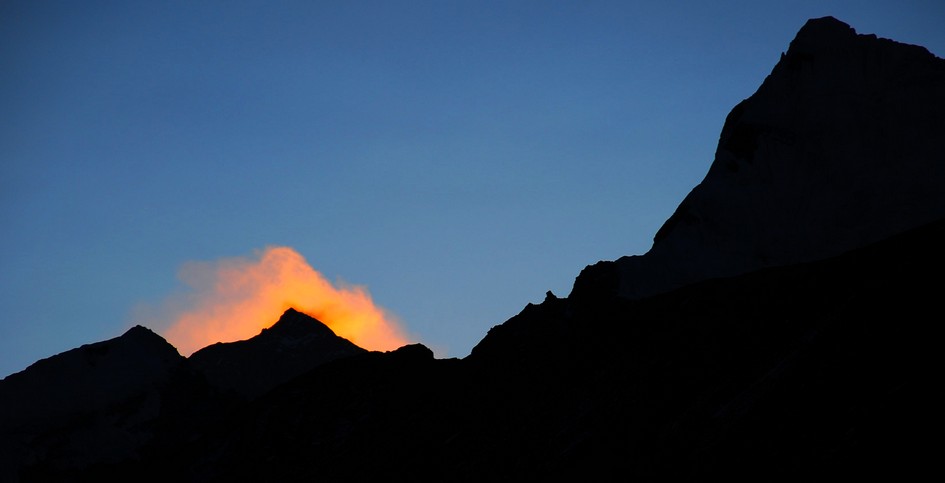 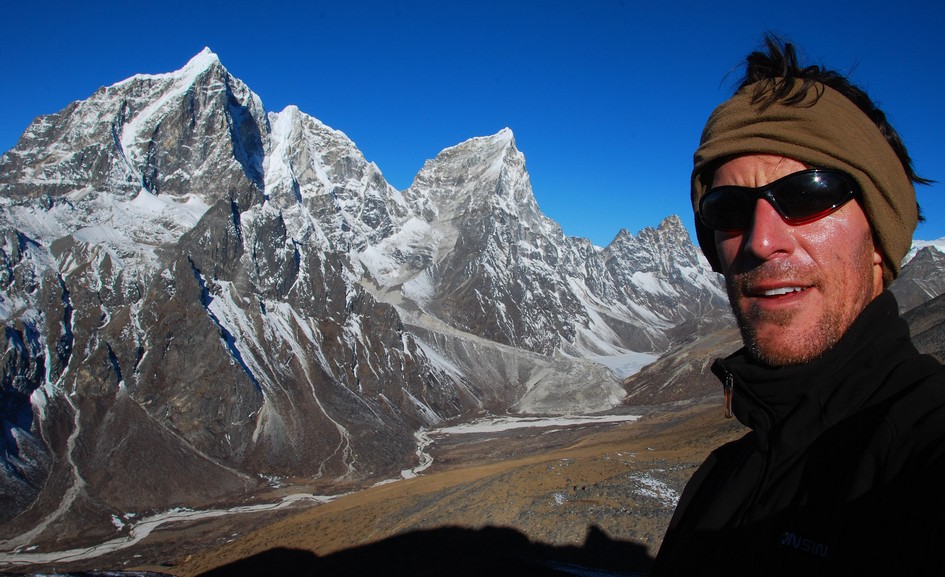 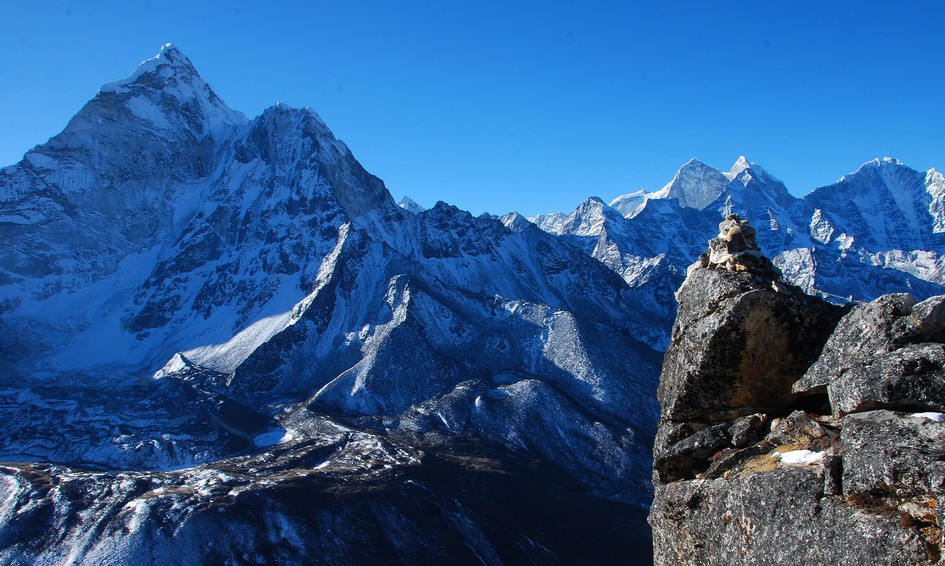 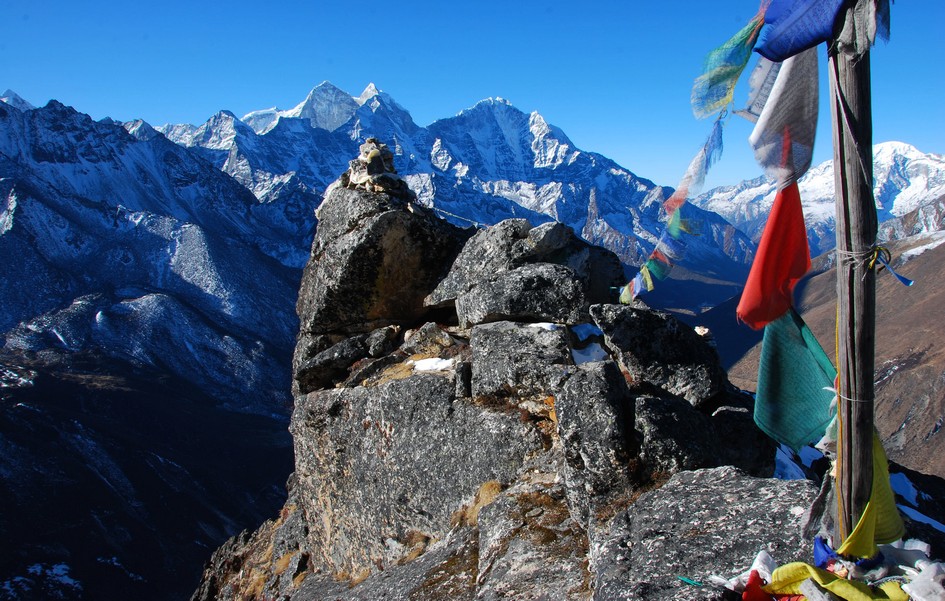 So down I went and before my noon I found myself in the village of Chhukung from where I would begin my journey across the Kongma La....alone. Butterflies anyone?