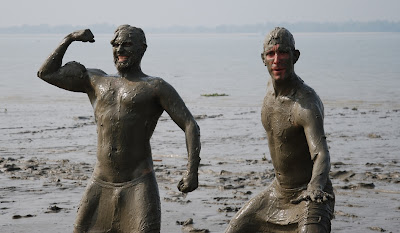 Jan 9th, 2010 - I slept surprisingly well considering our watch tower location. Something about the fresh cool air and the relative warmth and seclusion inside my sleeping made for a restful night's sleep. We collected our things and headed back to the boat for a bit of breakfast. While enjoying our meal we noticed a small boat with what appeared to be most of the population of Bangladesh on it approaching the trail leading to the watch tower and the beach beyond. After breakfast we too headed back to the tower and continued on toward the seafront. We would be walking along Katka Beach to the Kochikhali Forest Station. Our boat was to rendezvous with us there.

Upon reaching the beach we encountered the battalion of men we’d seen earlier enjoying a match of beach cricket. They were all employees of a Bangladeshi clothing manufacturer on a company retreat.  As one might expect not long after our arrival we became the center of attention. 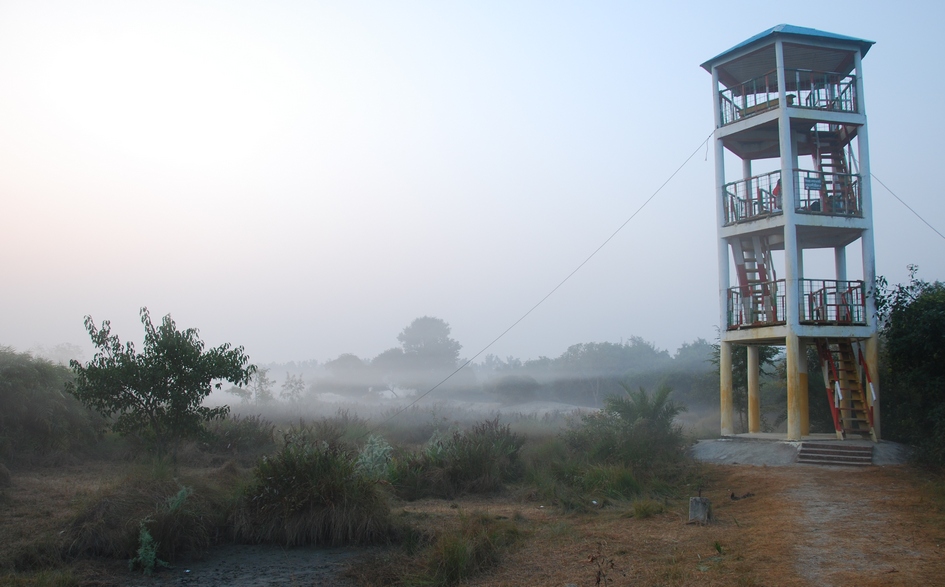 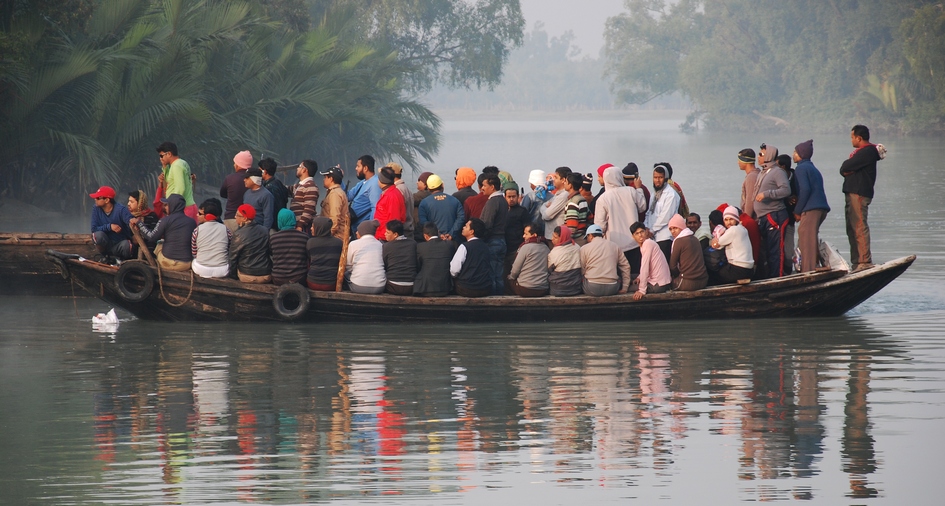 While Al was attempting to shoot a bit of footage on his video camera he was inundated with requests for photos and handshakes. He was surrounded for a good ten minutes. I too had a small entourage of fans jostling to get a photo of the freakishly tall blanco with a silly hat.  It usually begins the same way: A member of the group kind of shimmies (a bit surreptitiously) up beside me while a co-conspirator snaps a photo on his camera phone. When it is clear that I am amenable to the prospect of being photographed actual verbal requests follow and before you know it there is a steady stream of admirers vying for your attention. Ahhhhh, the burden of stardom. Everyone has their cross to bear. I am certainly not complaining. It beats getting your ass kicked. The experience was very reminiscent of my time in Indonesia.

After our Glamour shoot we continued along the coast.  It is an alluring stretch of beach made all the more resplendent by the fact that we had it to ourselves. It had a bit of an apocalyptic-end-of-the-world feel and a slightly tense atmosphere owing to the possibility of a feline marauder lurking in the forest behind us. Heeeeeere, kitty, kitty, kitty. Come out, come out wherever you are!

It was not all in my head as we soon discovered recent kitty tracks intermixed in with all the deer and boar hoof prints. Heeeeere, kitty, kitty, kitty. Nice kitty, kitty. I also spotted a giant otter patrolling the waters near the shore but it retreated before I had a chance to snap a photo. I’m getting used to disappointment. Besides birds and the occasional boar sighting we once again came up empty with El Tigre. Clearly, they had been there and it appears, in light of the pug marks, that the beaches serve as sort of tiger highway. If only I could manage a walk during rush hour. 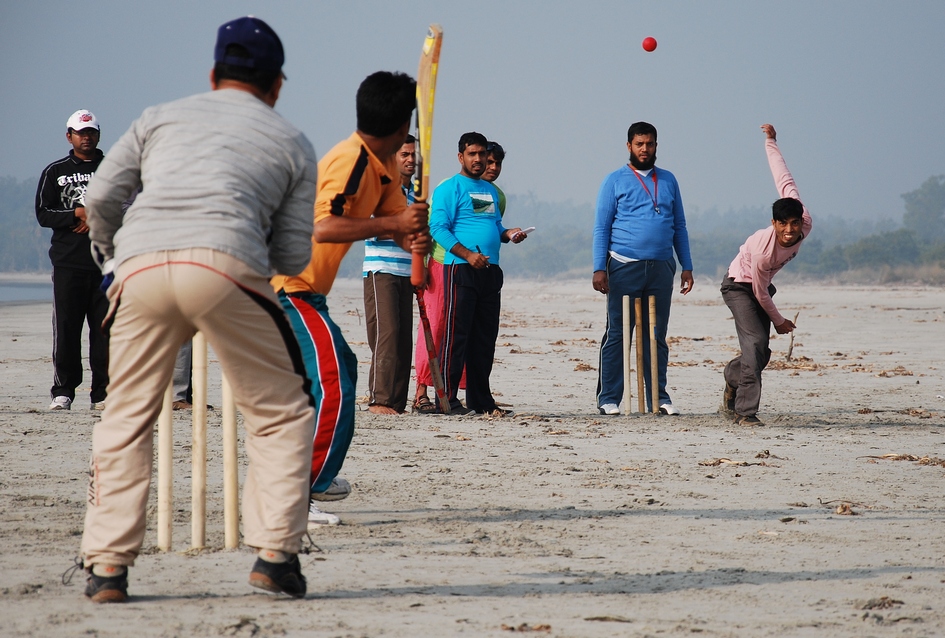 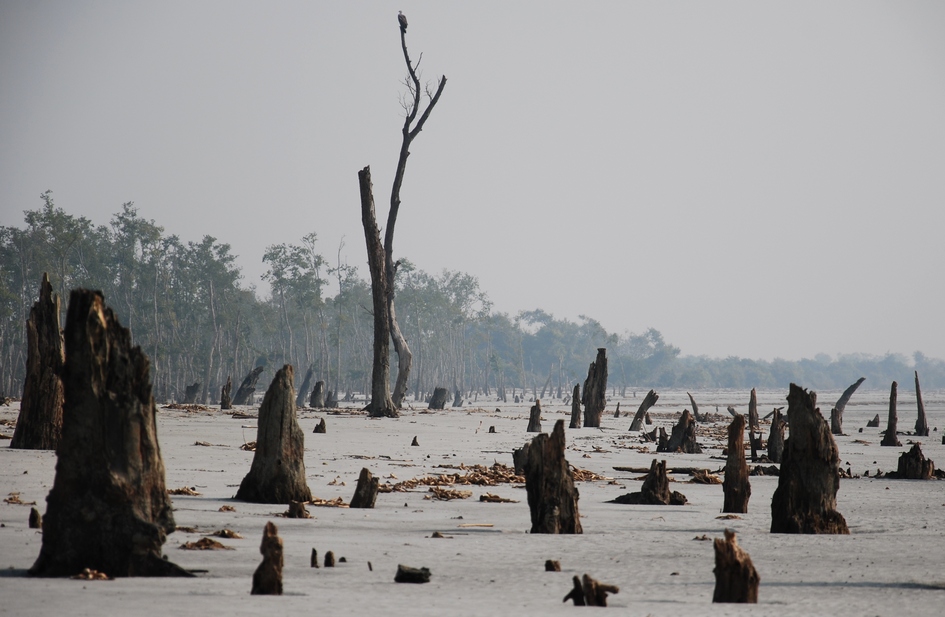 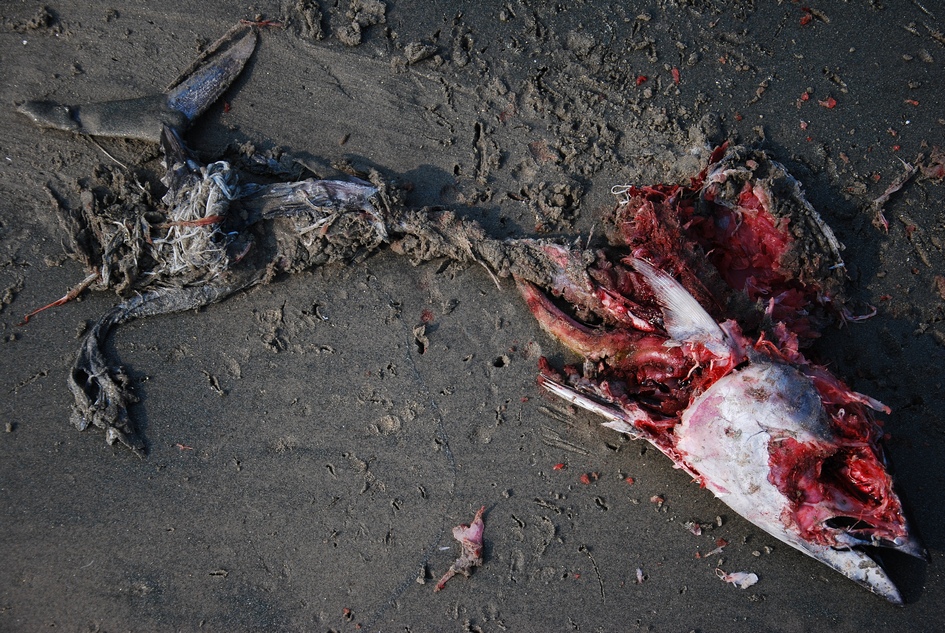 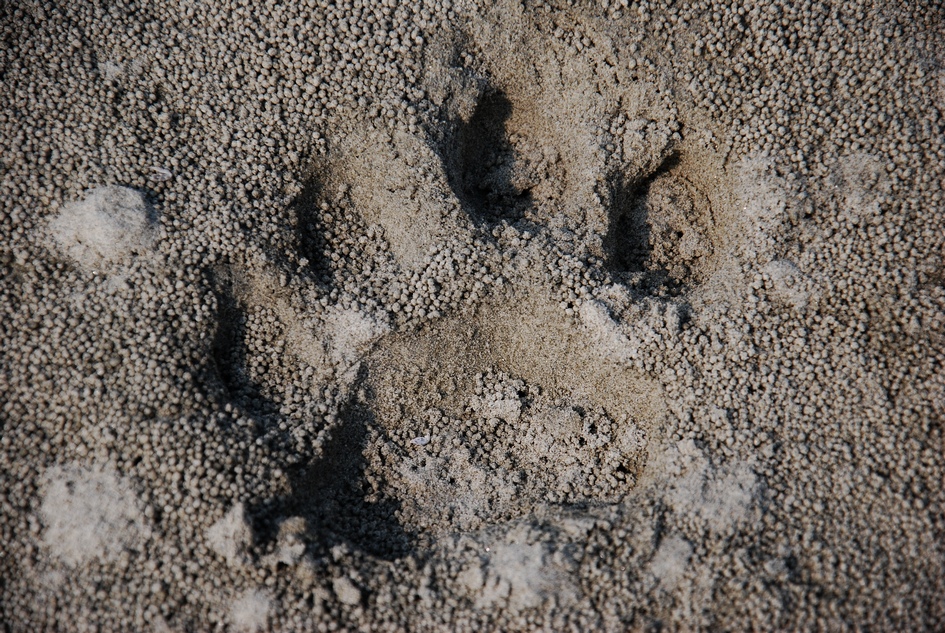 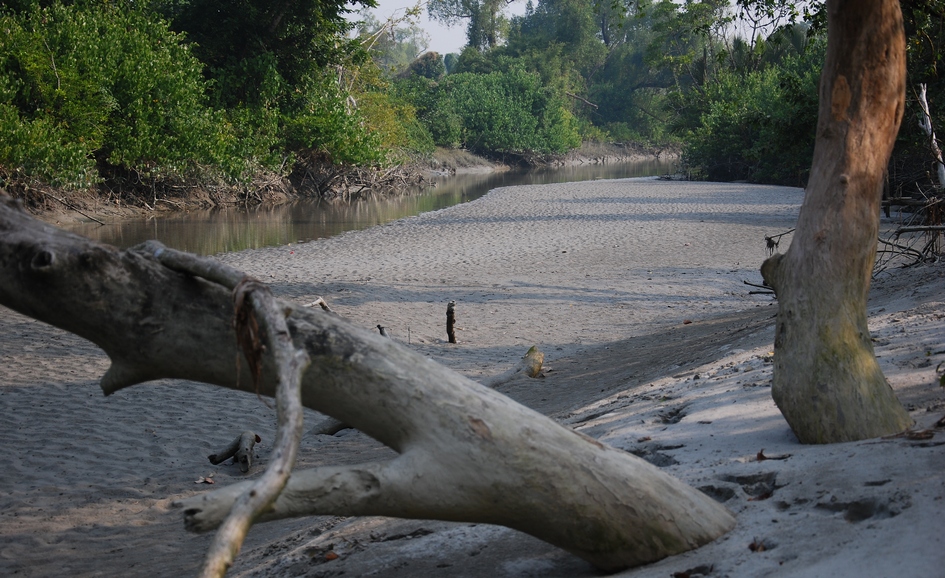 We made it to where our boat was moored near Kochikhali right around lunch time. After lunch we were in for a special treat.  Alex and I engaged in Sundarbans MudFest '10 on the shore of a nearby island. When the tide begins to recede the mud appears and is absolutely perfect for just about anything you want to do in or with mud to include but not limited to: sliding, throwing, painting yourself, burying your head, eating, wearing as hat, mudskipping, packing it in your ear, blinding yourself, making mud angels, flexing mud muscles, being dragged by a small Bangladeshi man, wrestling, stomach racing, taking homoerotic ‘we’re on a gay mud wrestling holiday’ photos, so on and so forth.

We did what many pay a psychiatrist hundreds of dollars to achieve: childhood regression (five or six years of age in my estimation). It has been a while since I’ve had that much fun behaving like a child (it happens more than it probably should but it had been a while).  At one point my fellow mudskipper was completely blinded by the large volume of mud covering his eyes (due in no small part to the fact he’d just spent the last five minutes burying his head in the slime). As a result I was forced to escort him, by the arm, to the water’s edge. This would explain the rather suggestive photo of Slappy and Slick walking hand in hand in the sludge. I think the slight protrusion of asscrack really cements the image’s romantic nature. What can I say? 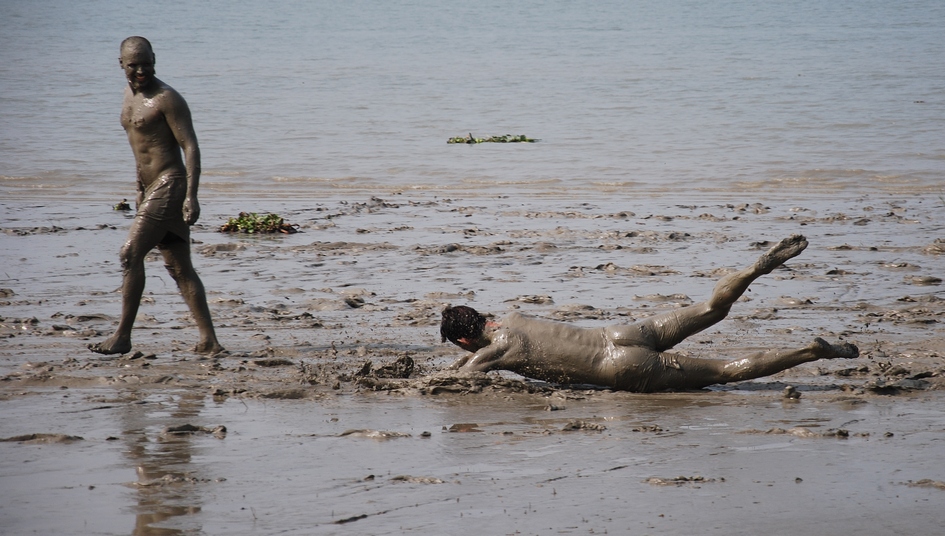 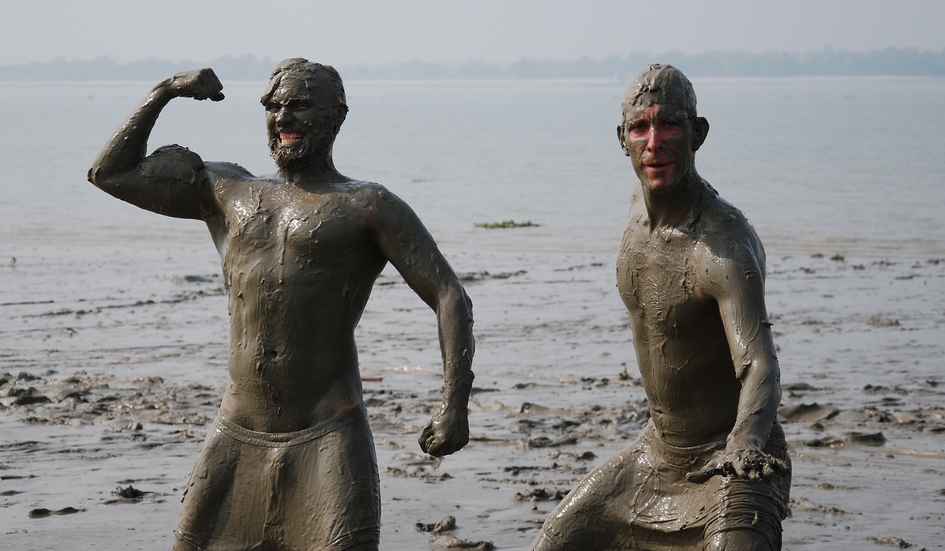 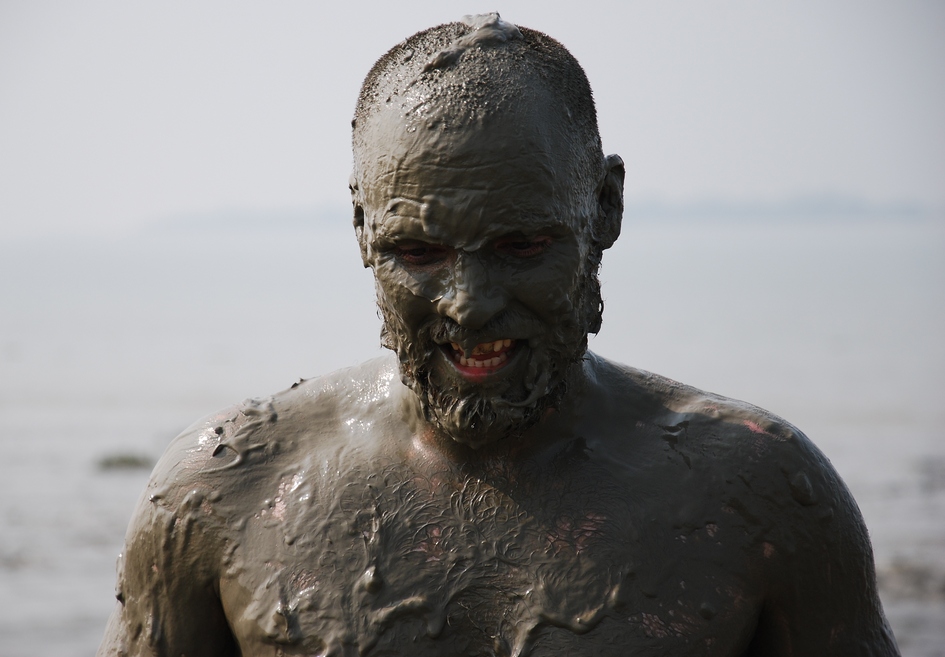 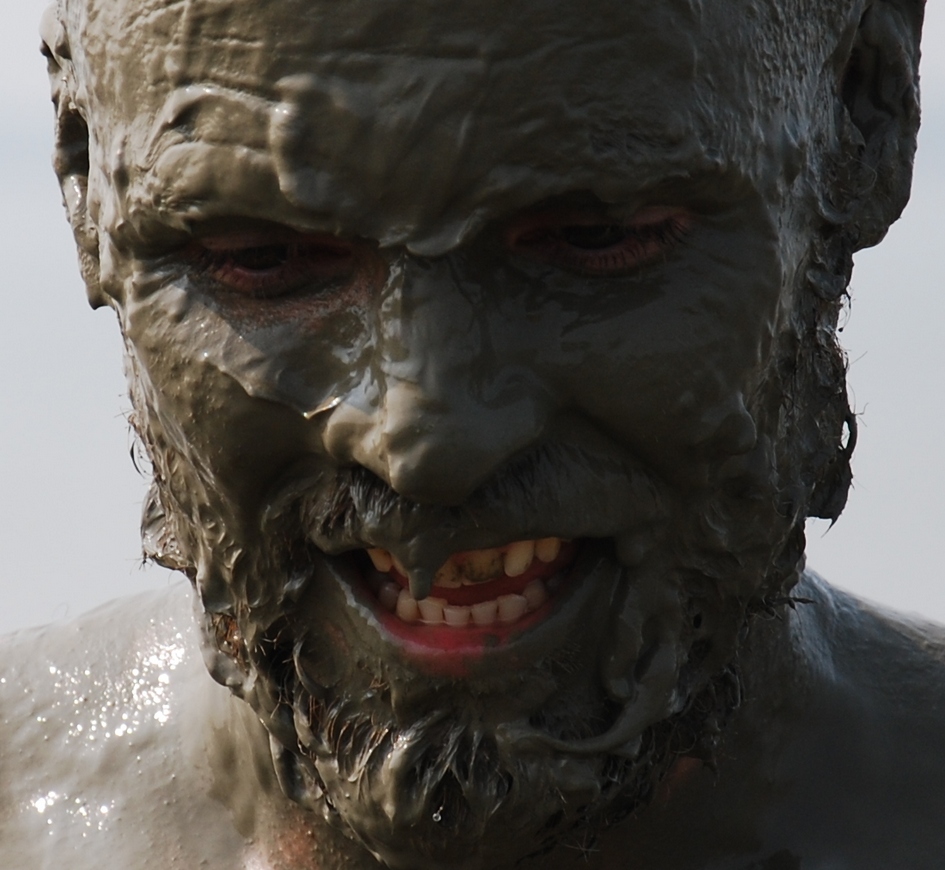 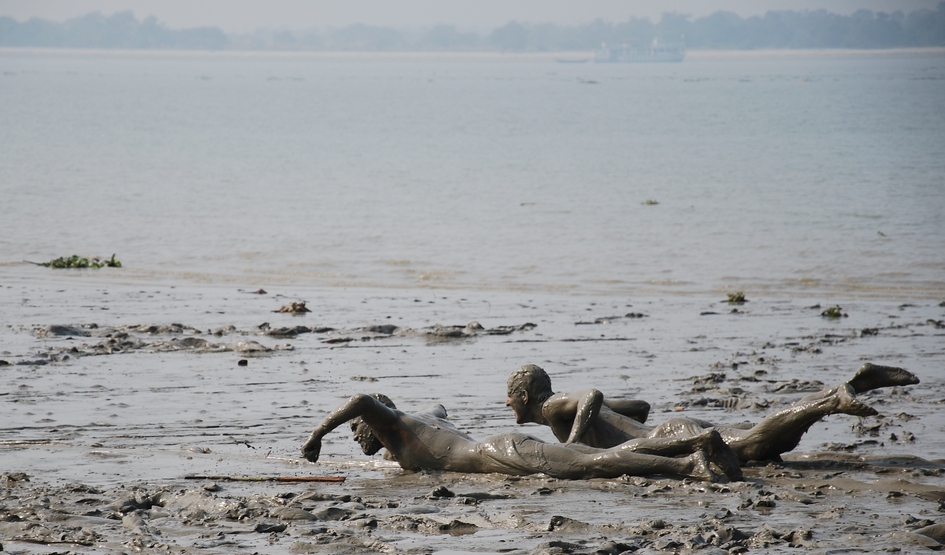 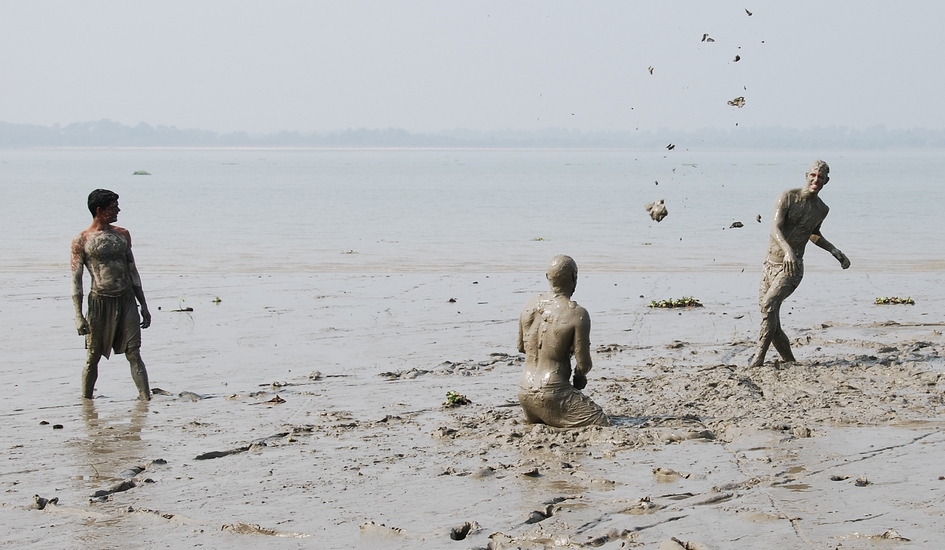 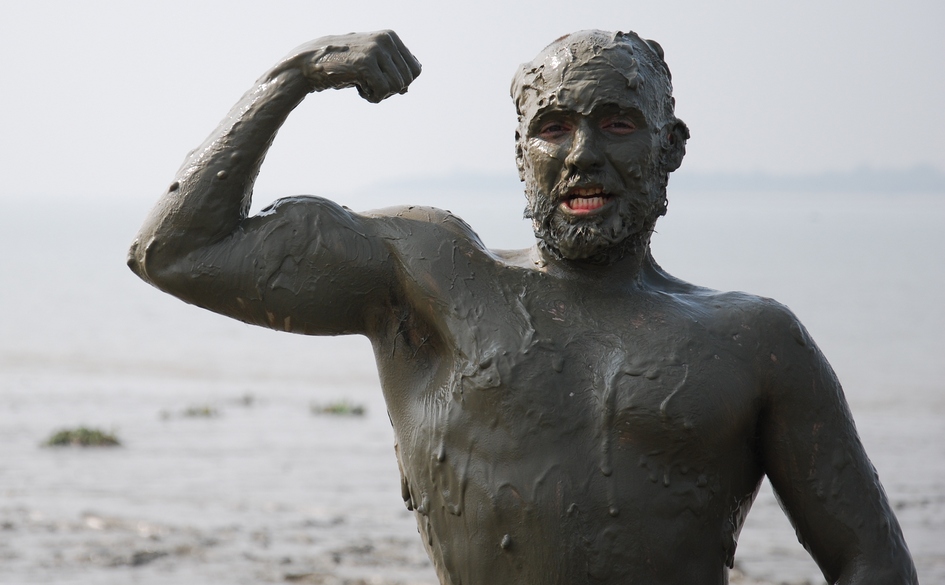 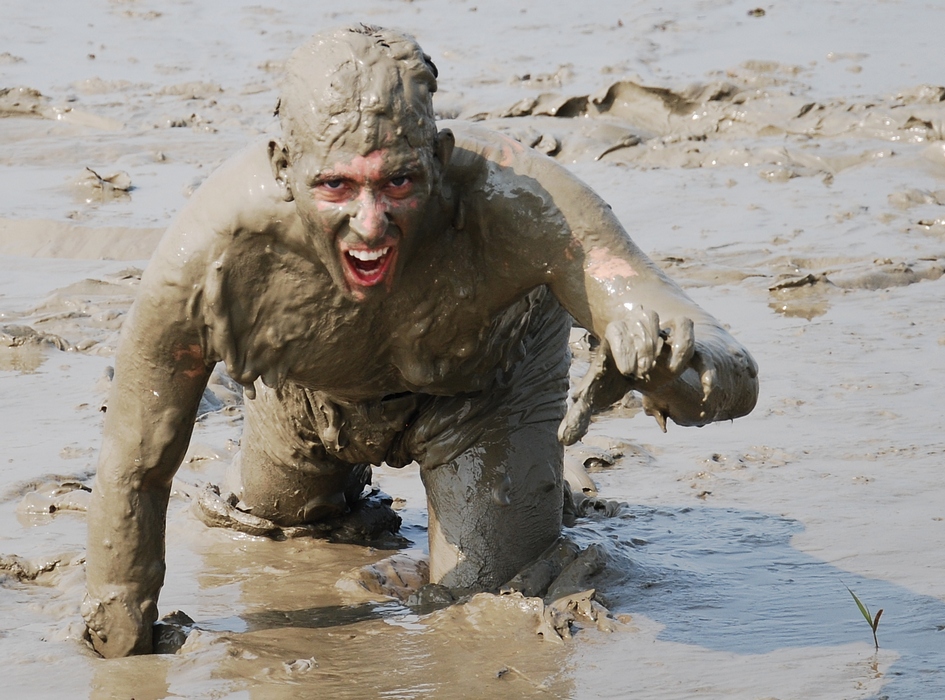 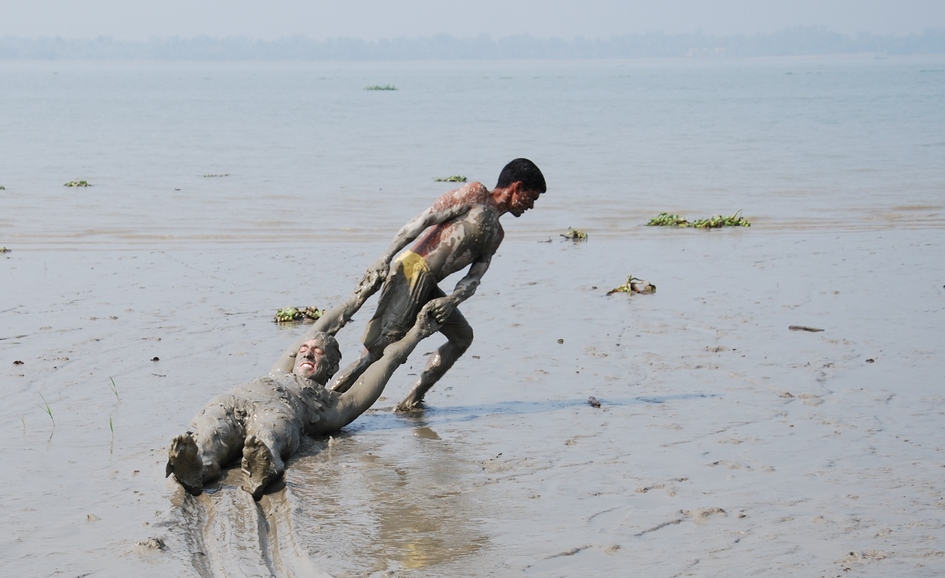 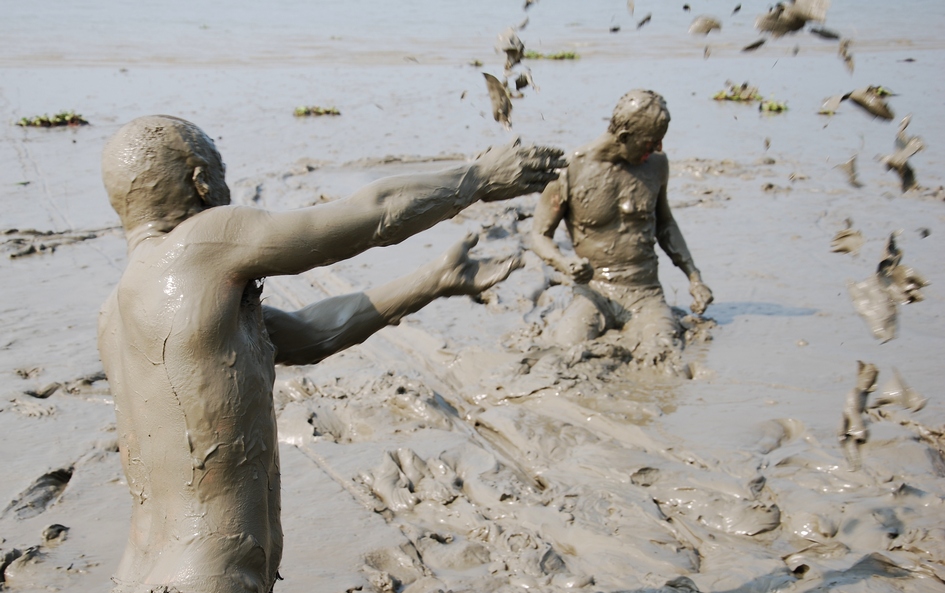 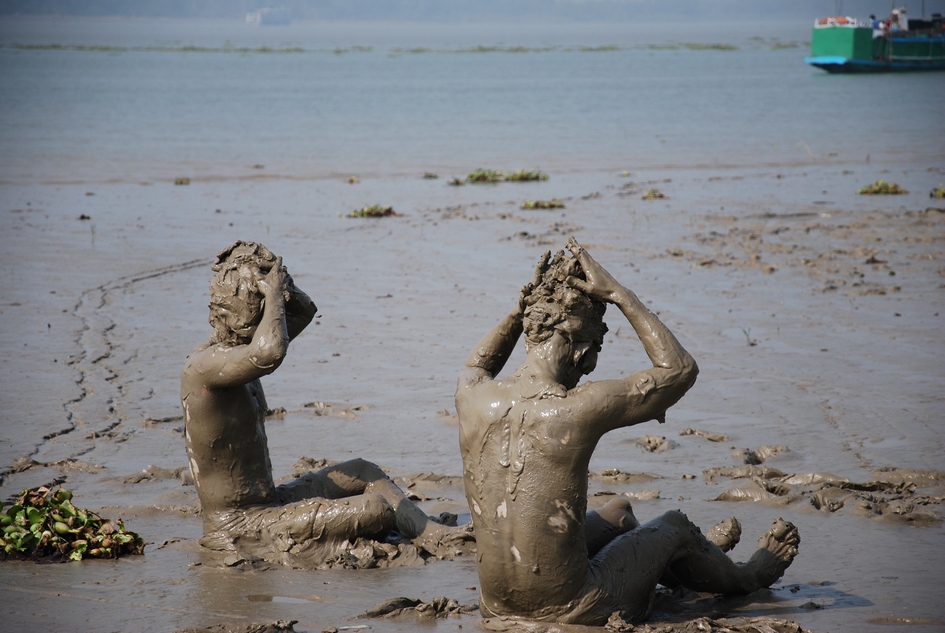 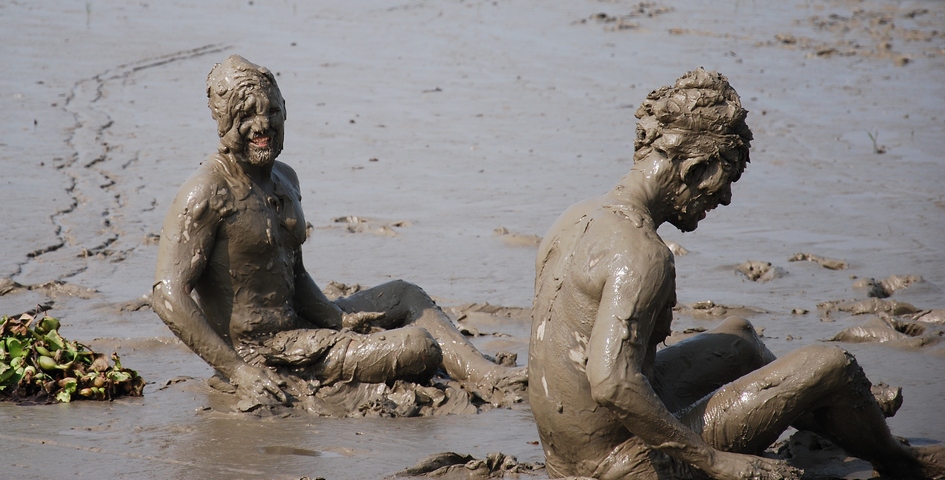 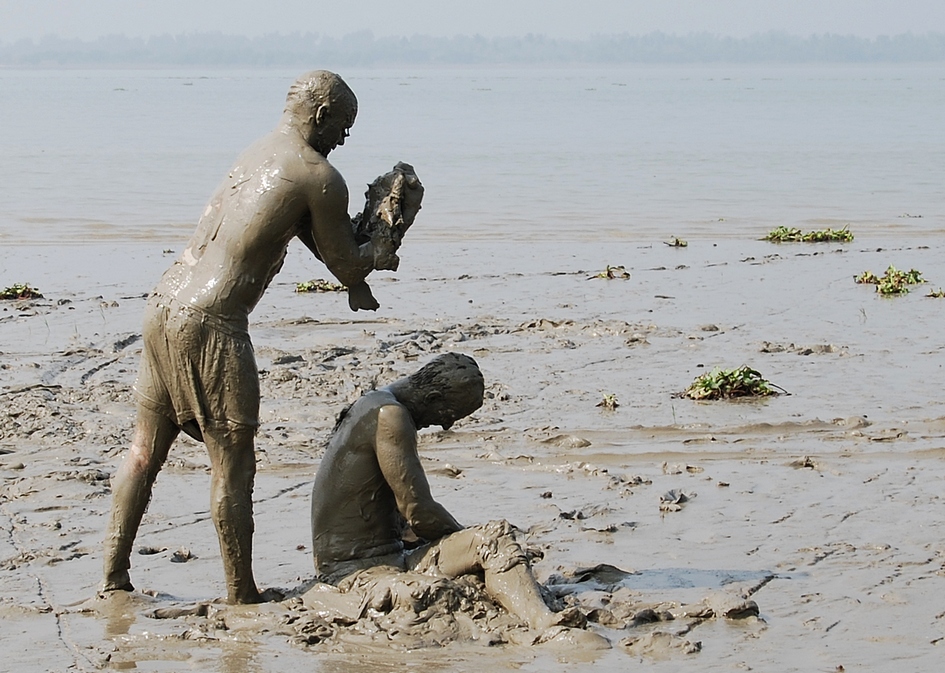 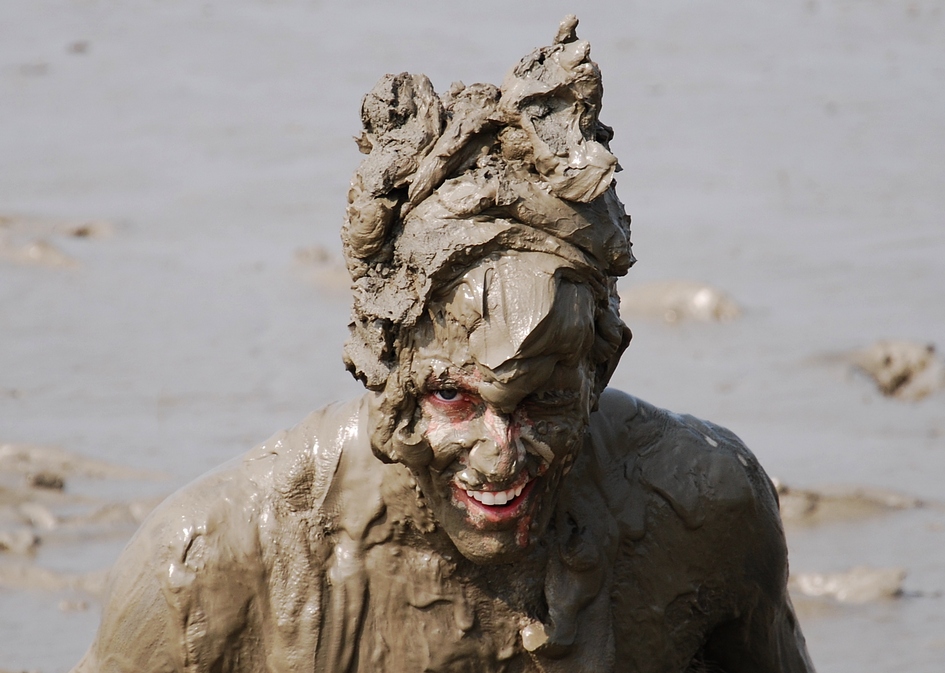 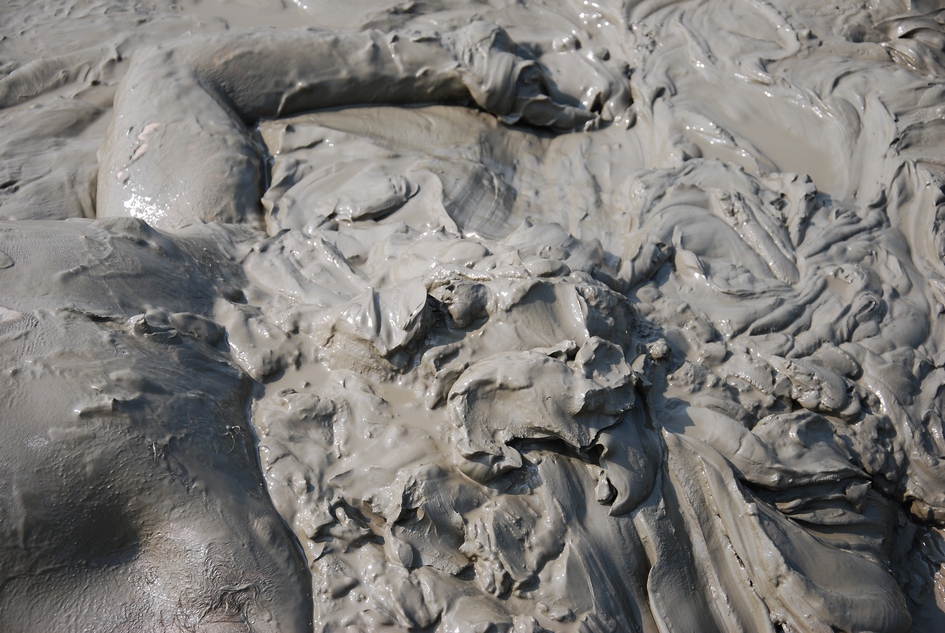 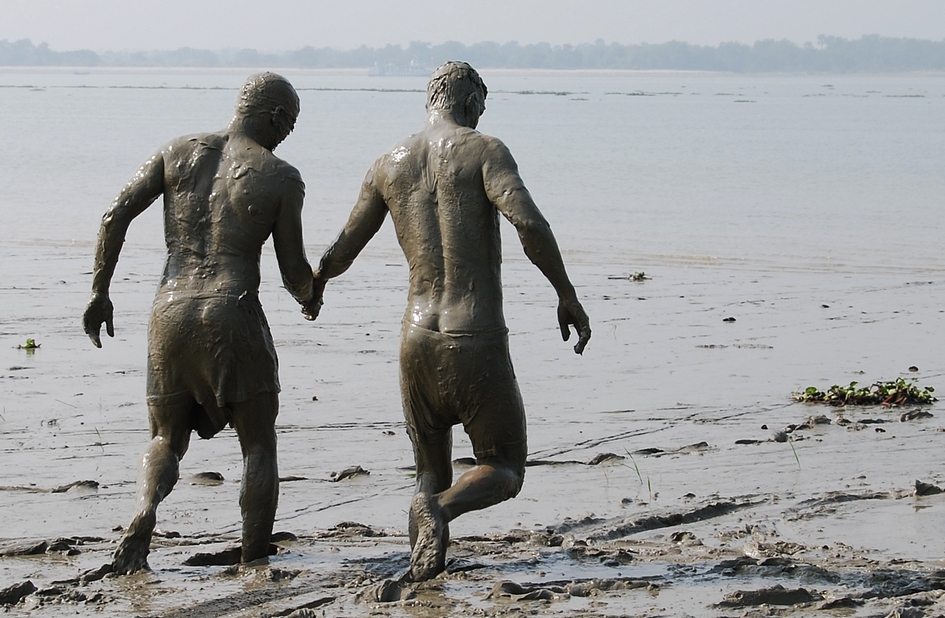 After a rather exhausting swim against the current back to the boat the process of cleansing began. Although most of the mud was removed before we reached the boat the fact is I had mud packed in places I believed to be water tight. Not only that our skipper  was a fascist about boat cleanliness (not a bad thing) requiring us to be extra thorough. One of the more awkward aspects of this trip was the insistence by a member of the crew (the country boat owner) to manually clean our feet and shoes when they became dirty. Having a small Bengali man repeatedly scrub your feet as if you were a member of the royal family was a bit uncomfortable.  After a constant string of, “No, no you don’t need to do that”, “That’s OK, I’ve got it”, and “No really, not necessary”, I finally threw in the towel and just let it happen. I was never quite sure if he was being obscenely nice or insanely fastidious about two filthy yodels mucking up the boat. Even after I was clean I still felt a little dirty.  If that wasn’t enough after we’d doffed are mudskipping shorts he began scrubbing them as well. Superb.

Afterward we returned to the island for another jaunt along the beach. The Sundarbans is nothing if not dynamic with a constant shaping and reshaping of the landscape through tidal action and sediment deposit. The island we were patrolling was only around 35-40 years old (there was a bit of confusion about its actual age) and the result of sediment allivium. Although it has a name (Pokhkhir Char) I dubbed it Tiger Island. Why? Well, if local gossip has any validity there are supposedly at least five tigers dwelling on an island not more than 16 sq km, four of which are reputed to be a mother and three cubs. Judging from the number of pug marks (tracks) we discovered, I am inclined to believe the numbers. The abundance of prey (i.e. deer and boar) would also support the claim.

So on the afternoon of the third day we again found ourselves probing the coastal sands and scanning the edge of the forest for Khan and friends. And once again we came up short, but lucky for us just wandering around is half the fun, especially in such a marvelous place. I did see something darting through the forest and made chase along the sand but whatever it was made haste and was gone in an instant.  Most likely it was a deer, although deer usually make more noise when startled. This creature vanished without a sound. Was that you Mr. Khan? As the sun began to set and the light faded we made our way back to the ship. Another excellent day. We decided that the watchtower deserved another go so we returned for another wildlife midnight vigil. 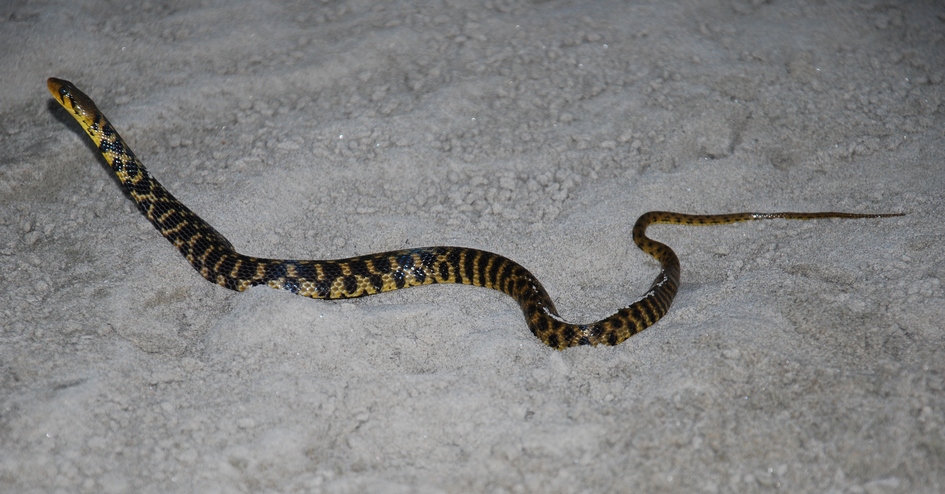 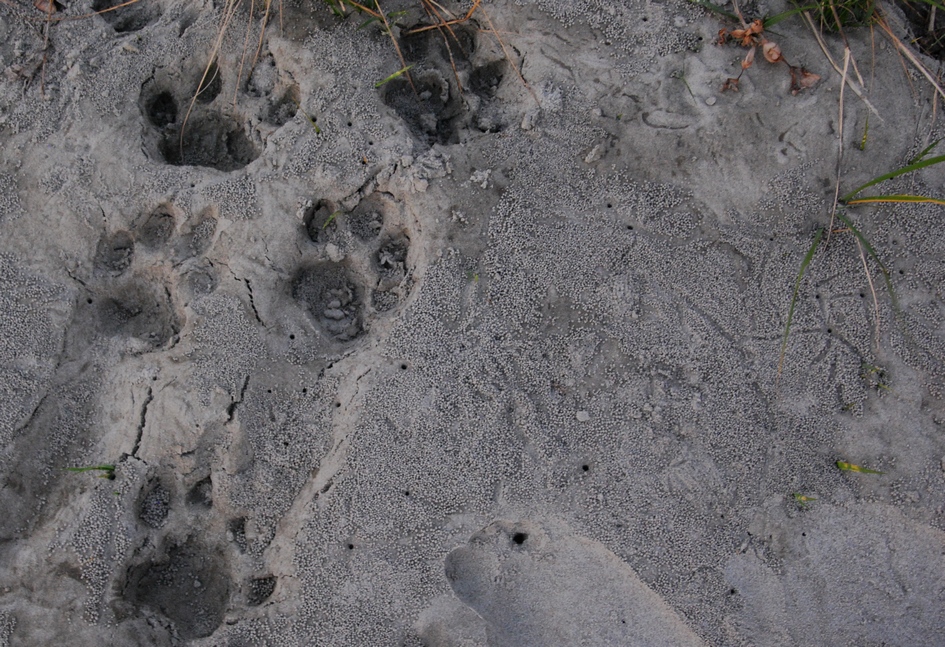 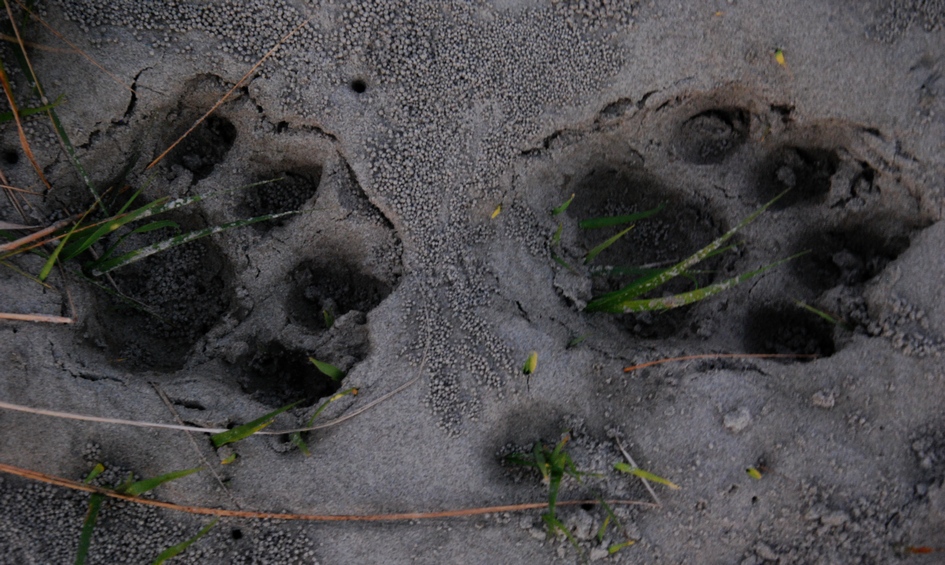 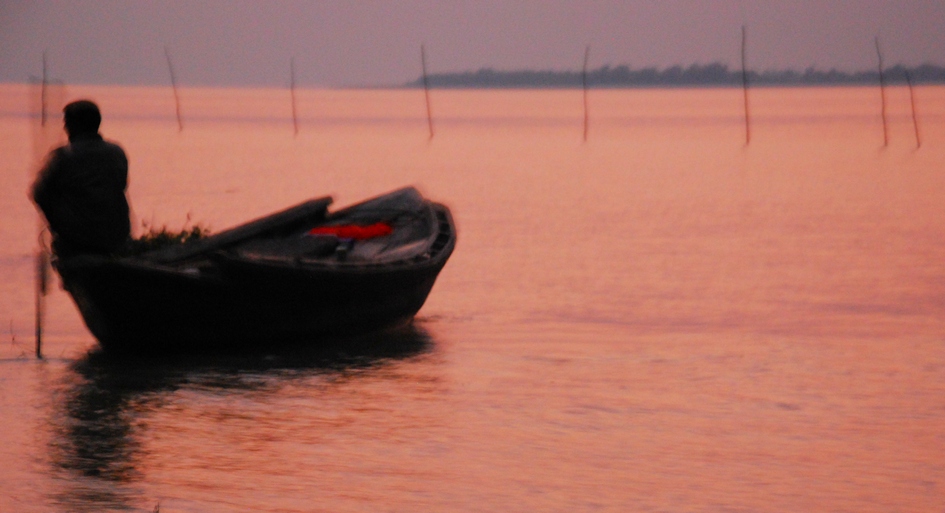