Jan 21st, 2010 - The next morning I arose and enjoyed my breakfast under the close supervision of my benefactor(s), staring straight ahead and masticating in total awkward silence. After breakfast I brushed my teeth and took a poop. I would leave this detail out but for the fact that after I came out of the bathroom (communal and separate from the room) one of my caretakers was standing in total silence staring in my direction. I said good morning and moved on. I am in the habit of having whole conversations with myself, especially when I am alone (el crapirino being no exception). I wonder how long he stood outside the door and what he must have been thinking? Then again, he was patiently waiting outside the can while I dumpeth for no apparent reason so I suppose he was in no position to judge.

Time for a second attempt at hiring a boat. I started towards the dock and ‘office’ I had seen by the water the evening before. Surely this would be the place. On the way I was sidetracked once again by more strangers wanting to treat me to tea. Impossible to refuse such hospitality. After a spell I was off and as I walked along folks snapped pictures of me with their camera phones as I passed by. This made me giggle. Often I will stop and pose to make their job easier. It may be unforgivably vain to shamelessly feed the Bangladeshi paparazzi but no one is perfect.

When I arrived at the dock I soon discovered that once again I was in for a trial. There were folks roaming about so I began to make inquires. We walked onto the dock, pointed at a couple of boats, took pictures, and accomplished nothing. The language barrier reared its head as usual. Finally an older gentleman came out of the building and somehow managed to convey that in order to hire a boat I would need permission from the Forest Department…….seven kilometers away. Great.  Someone was kind enough to find a man with a motorcycle to give me a ride. So to the Forest Station I went. 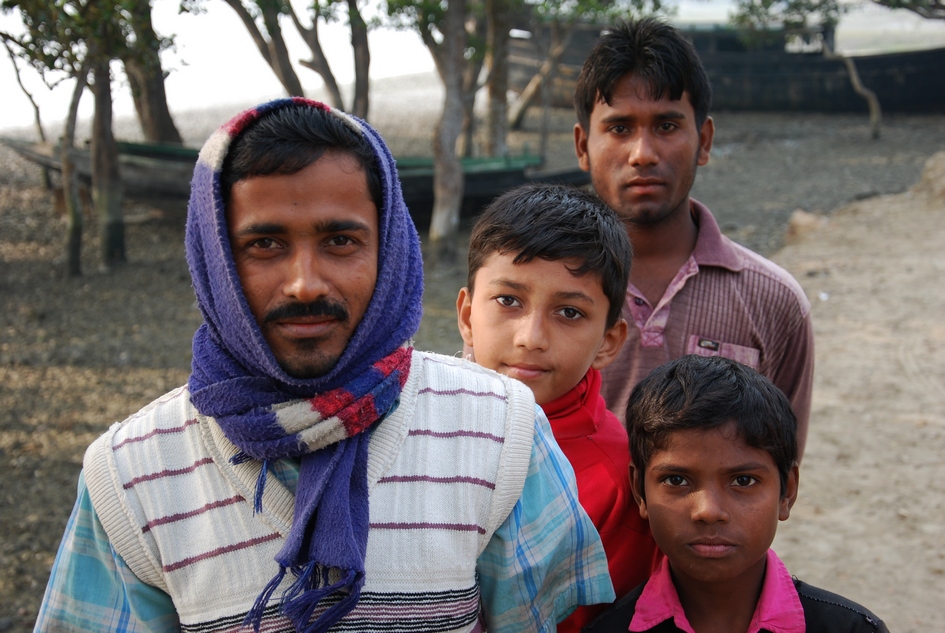 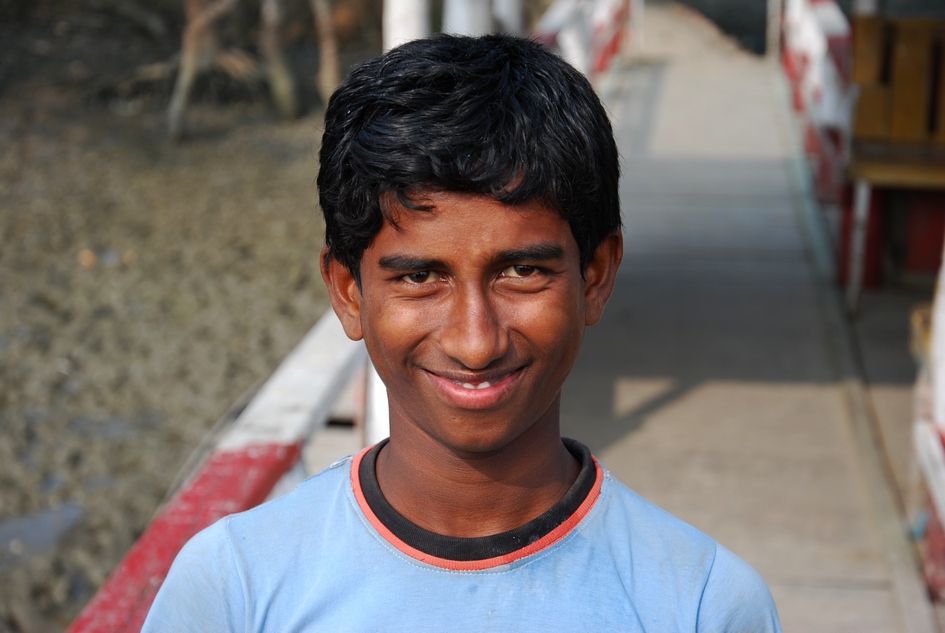 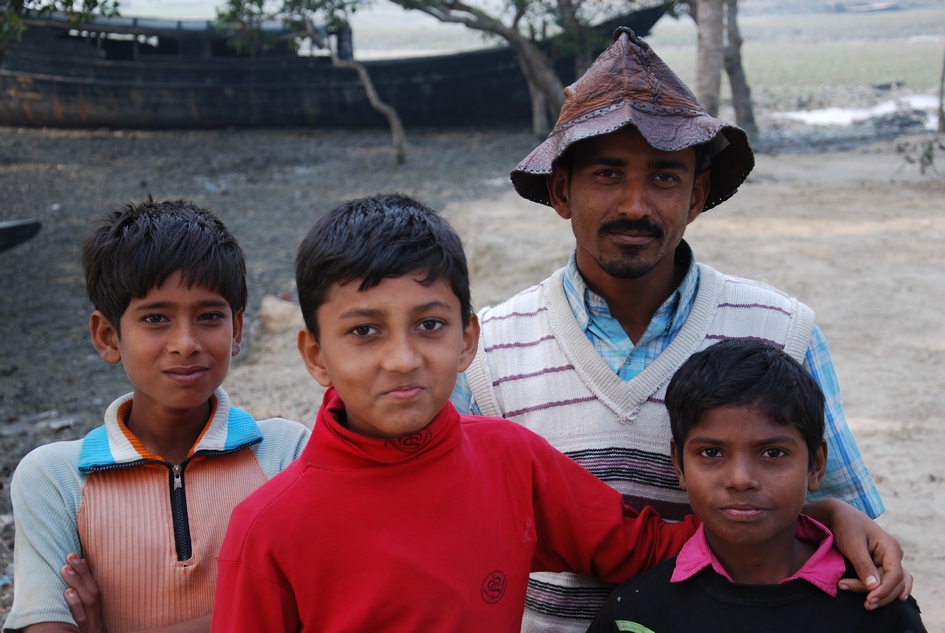 I walked into the office and was given the 'What the hell do you want?' look. My driver came along to help translate and foster even more confusion and miscommunication (to his credit he was trying his best to assist).  First I was asked if I had a copy of my passport. I did not. This seemed to cause a bit of concern for Forest Guy One and Forest Guy Two.  It appeared I would have to return to the hotel to retrieve a copy (in truth I should have remembered to bring one).  But then, as if to brush this aside, I was given a price quote, about $17 for permission, camera fee, and some other vague tax. Super. This did not include the boat but I was told a boatman could be hired nearby. Super duper. But then Forest Guy Two changed his mind and I was told that I had to go to Khulna (a couple hours away) in order to obtain permission.  Come again? I’d just spent two days getting here and now I was not allowed to go into the forest? So let us review the process: I need a copy of my passport. I don’t need a copy of my passport. I have to pay $17 to cover all the necessary fees. A boat can be hired nearby. Permission denied. Fiddle-f***ing-sticks!!!!

I was not pleased. Motorcycle Guy tried to assuage my disappointment a bit by showing me the area near the office. Out back they had two spotted deer in a fenced-in enclosure. Riveting. 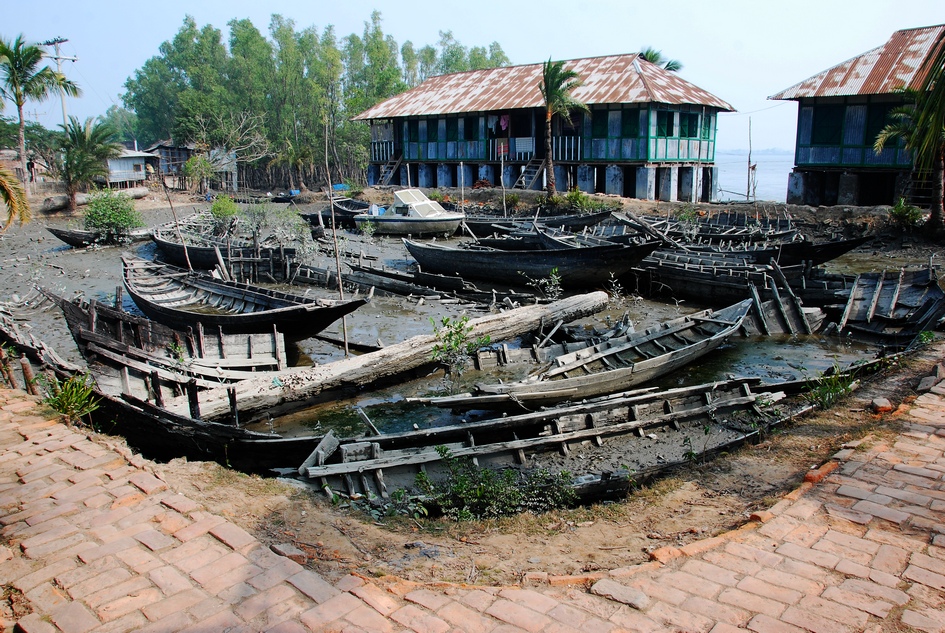 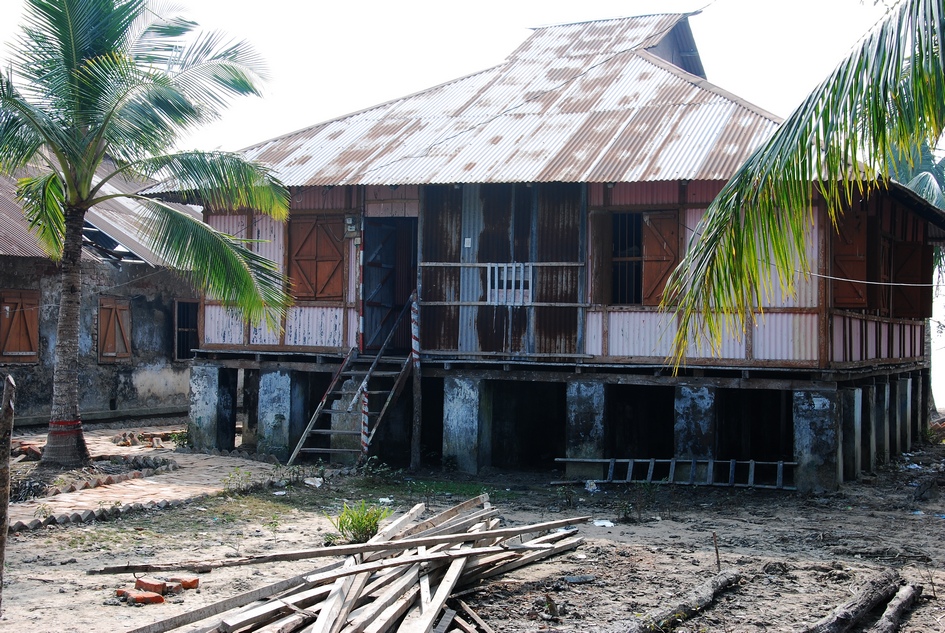 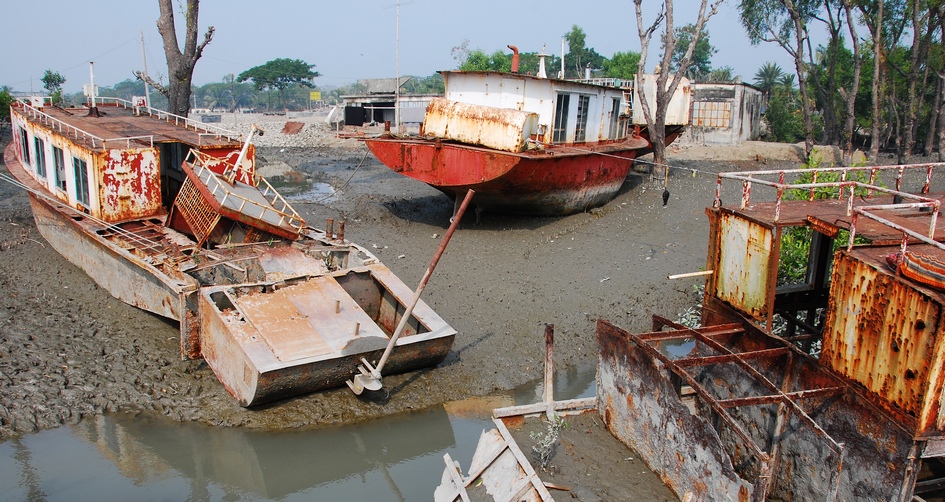 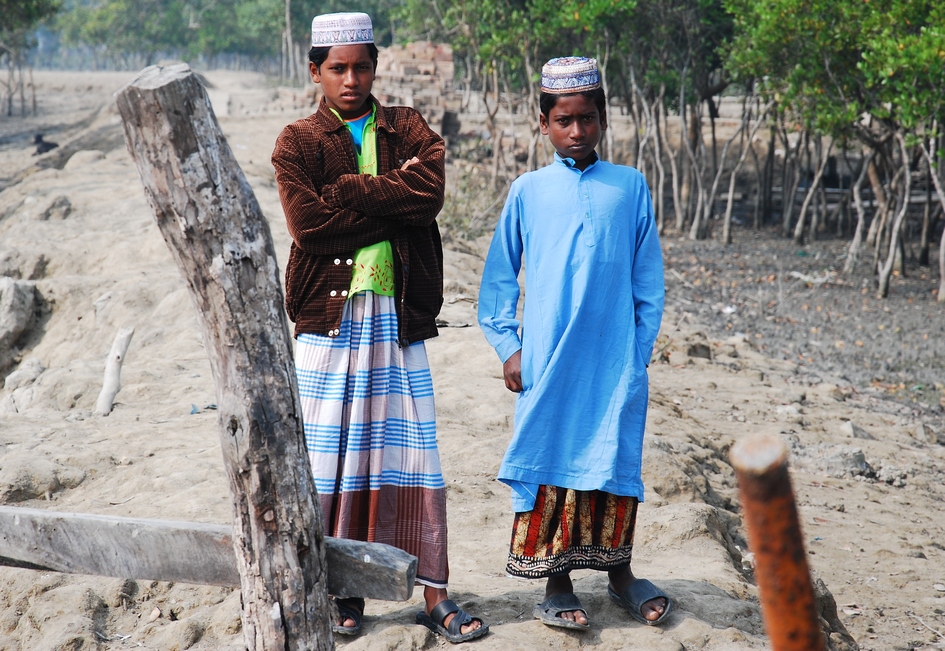 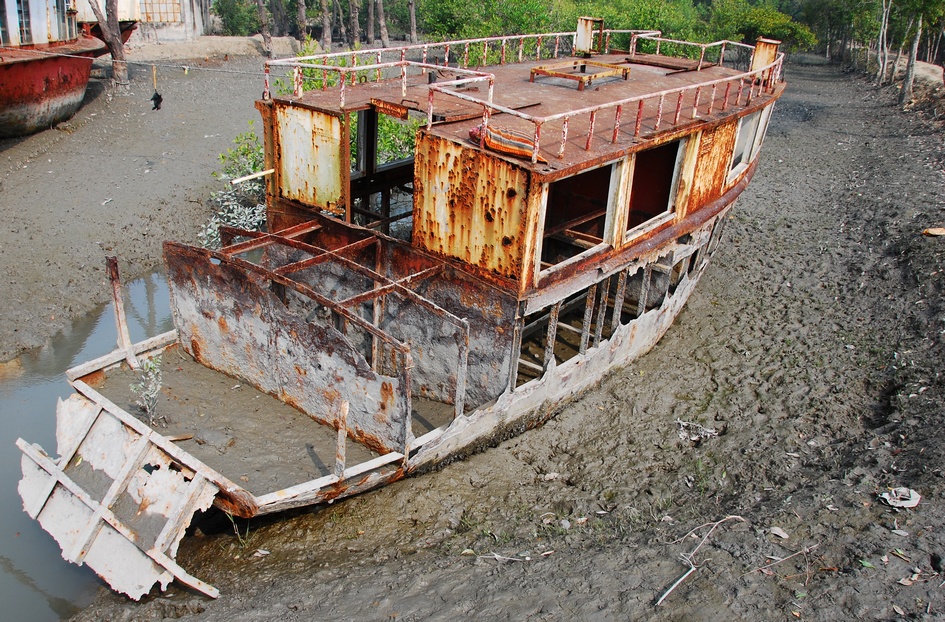 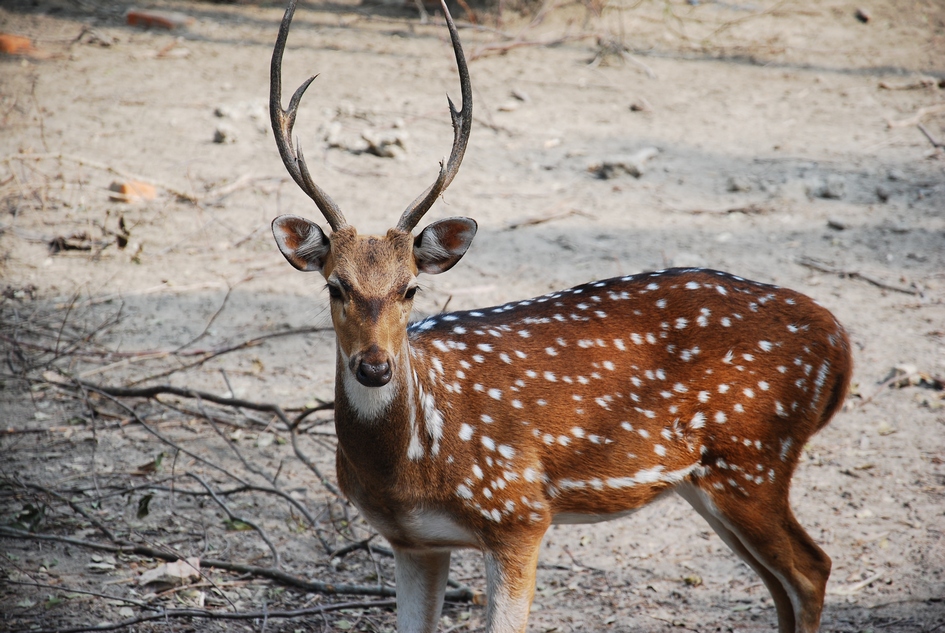 So back to Munshiigonj. Along the way Motorcycle Guy brought me for a ride through the countryside which was extremely peaceful and serene, in that bucolic sort of away I mentioned before. It put me at easy and I was happy to pay the exorbitant rate for the ‘tour’.

Back at the guesthouse I was once again presented with the dilemma of whether to keep trying or pack it in. And then I had an idea. I called the owner of Guide Tours (the company responsible for my previous trip to the Eastern Sundarbans). Mr. Mansur told me that he would make a call to the Khulna Forest Office, obtain the required permission, and have someone drop it off the next day. By a stroke of luck his daughter-in-law (a Swiss woman named Elizabeth involved in both tourism and local research) was bringing a group on a cultural tour of the area the following day.  Excellent.

But not so fast. About an hour later I received a text from Mr. Mansur saying that the Khulna office had refused me permission on the grounds that I had no knowledgeable guide to accompany me and the usual crap about safety. Damn it.  He did suggest that I give Elizabeth a call and that perhaps I could tag along with them. This I did. She was stupefied that the office near Munshigonj did not give me permission as she was certain they possessed the power to do so. Joining her group was not really an option as they were merely visiting some local villages that had recently celebrated the Bonbibi Festival. No Sundarbans for them. However, coincidentally the head of the Forest Department happened to be with her. She told me she would make some inquires and get back to me in an hour or so. I thought about just saying ‘F’ it and getting the hell out of Dodge but I figured I might as well wait and see. So I decided to go for another stroll west of the village along the river. My progress was impeded by yet another tea interval. So I sat there conversing in broken semi-unintelligible English, participating in a short lesson of Bengali 101, and taking photos of locals trying on my silly hat. And don’t forget the sipping of tea. As usual all of this was conducted under the curious gaze of twenty or so villagers. 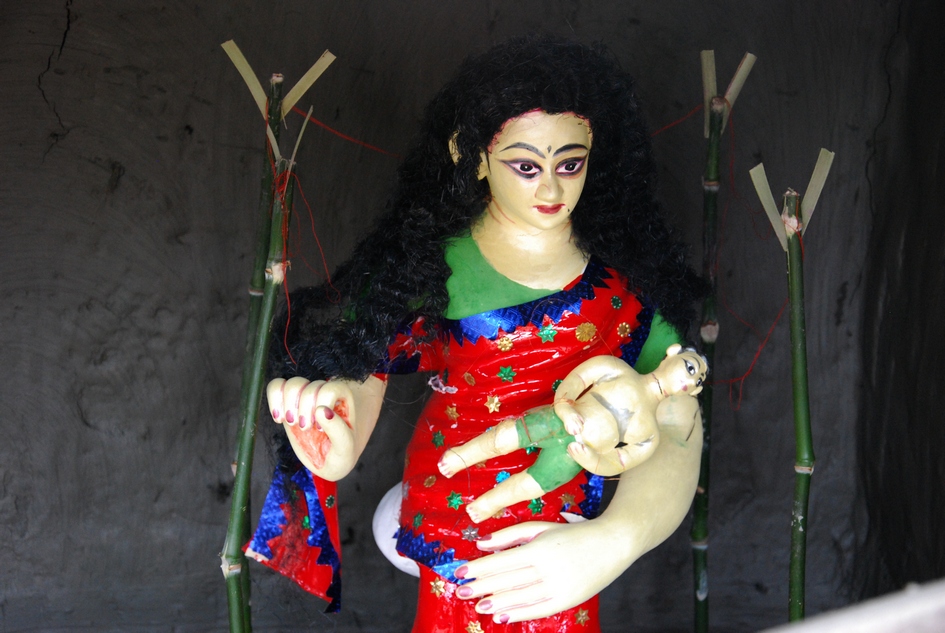 I happened to notice, almost out of nowhere, a white woman standing in the center of the village. I thought this rather queer (as in odd or strange) since I’d seen only one other whitey since my arrival. My curiosity piqued I walked over to have a chat. She was French and had just arrived in the area two days earlier. She is working for an NGO attempting to establish a waste management and sanitation program. She was there with her Bengali guide to put up posters seeking local support for the program.

When asked what my purpose there was I replied that I was in the midst of an unsuccessful attempt at entering the Sundarbans. At this point her guide, a man whose name sounded something like Ooopoo, shared some interesting tidbits with me. His theory on why I was denied permission has to do with pirates. Talk of pirates grabbed my attention as you may remember that I spoke with folks in the east about the mangrove marauders.

When I mentioned the name ‘Raju’ he was not only surprised I was privy to the name but appeared to be a bit concerned about mentioning the name out loud. He told me people here were scared of the pirates and that in all likelihood informants were numerous (hence the consternation at verbalizing the name). He also told me something I had not heard before, namely that local bandits had a nasty habit of kidnapping children for ransom.  Ransom? What money is there for ransom? He seemed to interpret my question as ‘Why would children be targeted?’. His answer: There is no point in stealing woman because no one would care. Riiiiiiight. Not really what I was getting at but thanks for that troubling take on the worth of an average village female. He also seemed to think that given the opportunity a tourist might be included in their target package. Excellent.

He did say that if I wanted to hire a boat for an illegal foray into the forest I should go ‘over there’ (reference previous post). Apparently, folks are willing to do it as long as it is on the down low. I suddenly realized that this is the place I was looking for all along and must be the ‘over there’ that the Nepali tourist spoke of the day before.  My concern was with the ‘down low’ component of the mission as I had just spent a day and a half not only asking everyone and their mother about hiring a boat but also had gone to the Forest Station to announce my presence. Way to go douchebag.

Reason, logic, and prudence notwithstanding, I went in search of my illicit tour.  However, ‘over there’ again turned out to be just on the other side of nowhere. Luckily, the walk itself was well worth my time as it brought me along a path sandwiched between the river on one side and rice-fields and fish farms on the other. And along the way I was shadowed by the usual entourage of the curious.   Mud huts, women dressed in colorful scarves and saris, children playing cricket, old men out for a stroll, chickens, goats, ducks conducting their endless search for sustenance, men in small wooden boats screaming for a picture, constant requests for personal information from the masses, the sun casting its dying glow across the water-filled fields, boats stranded in the mud, men and woman carrying all sorts of myriad items on their heads, aerial-mangrove roots protruding from the riverbank, so on and so forth. I felt like I was walking through the real Bangladesh, the one everyone should witness. 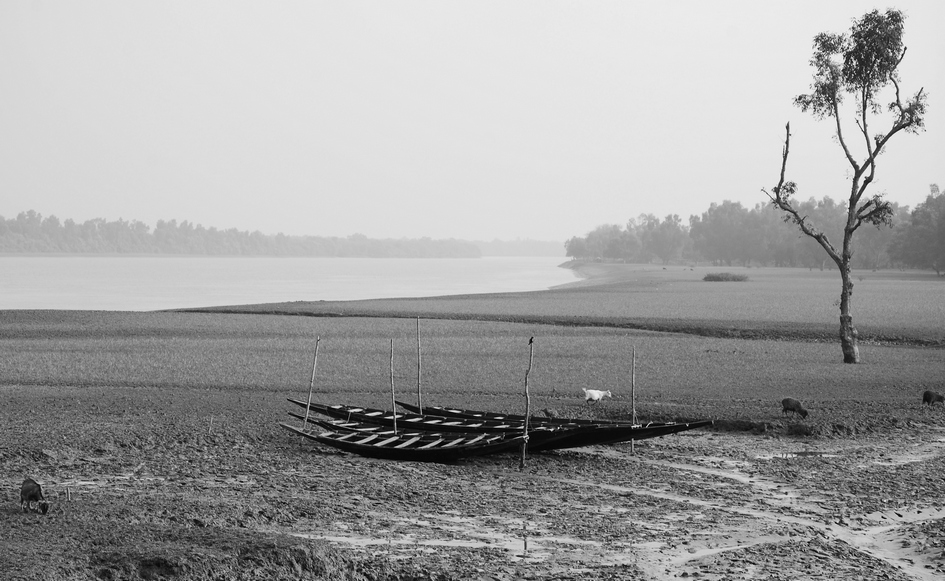 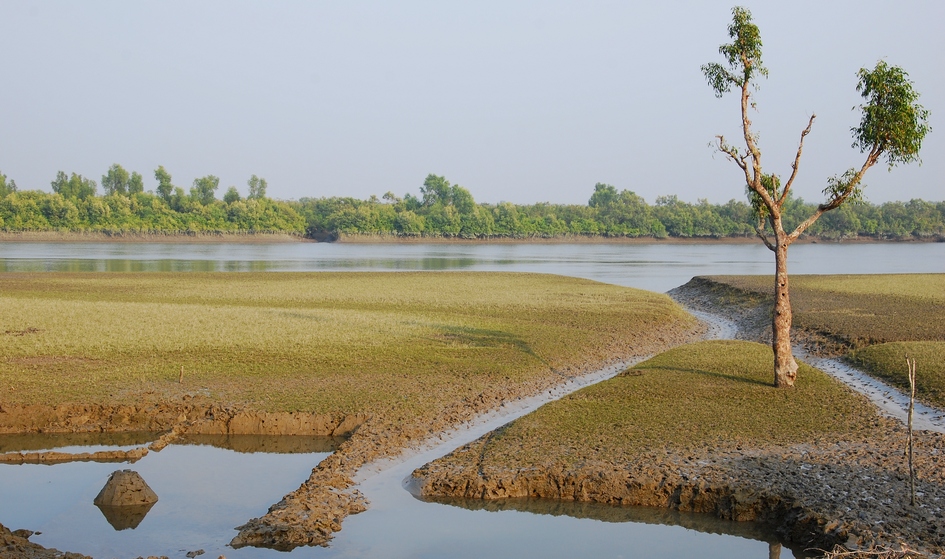 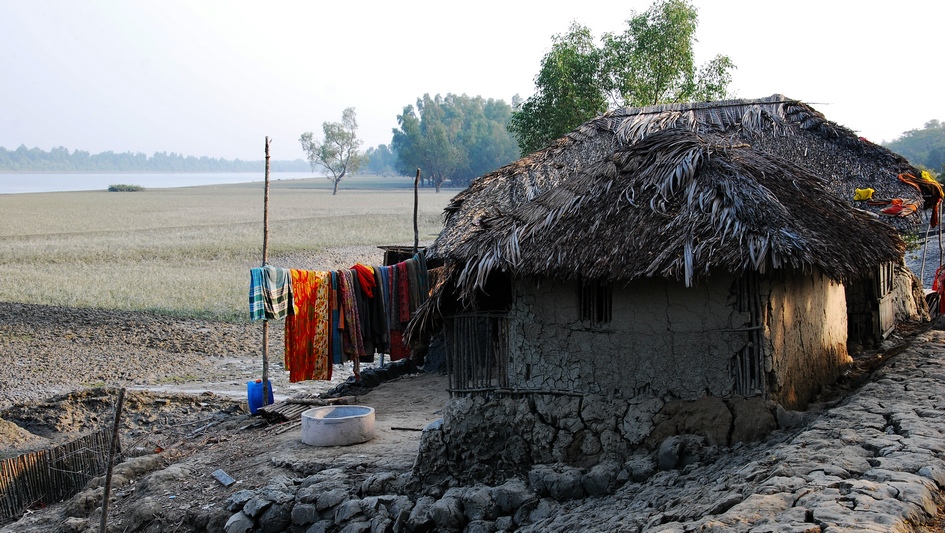 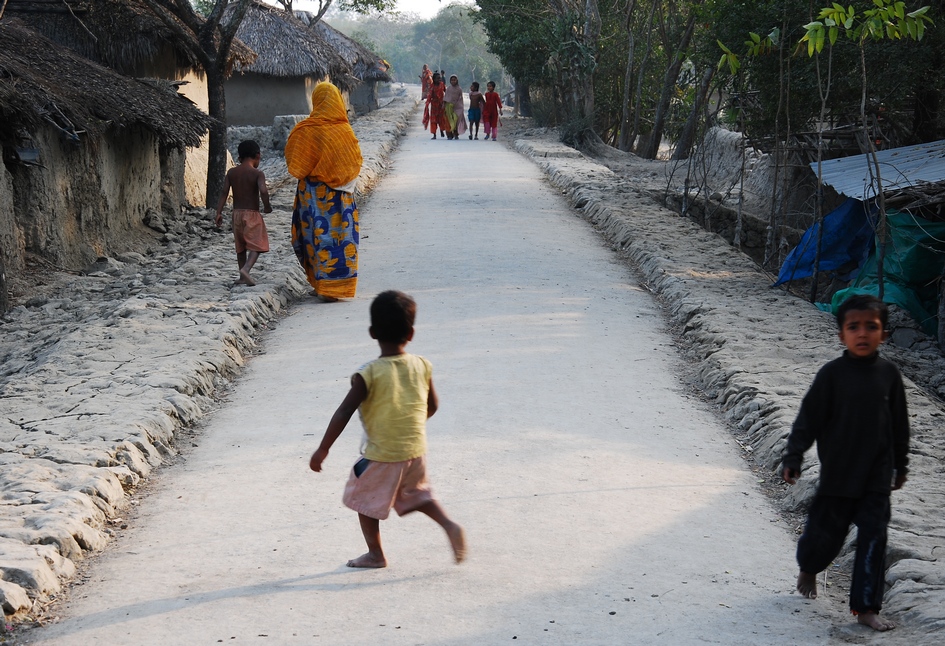 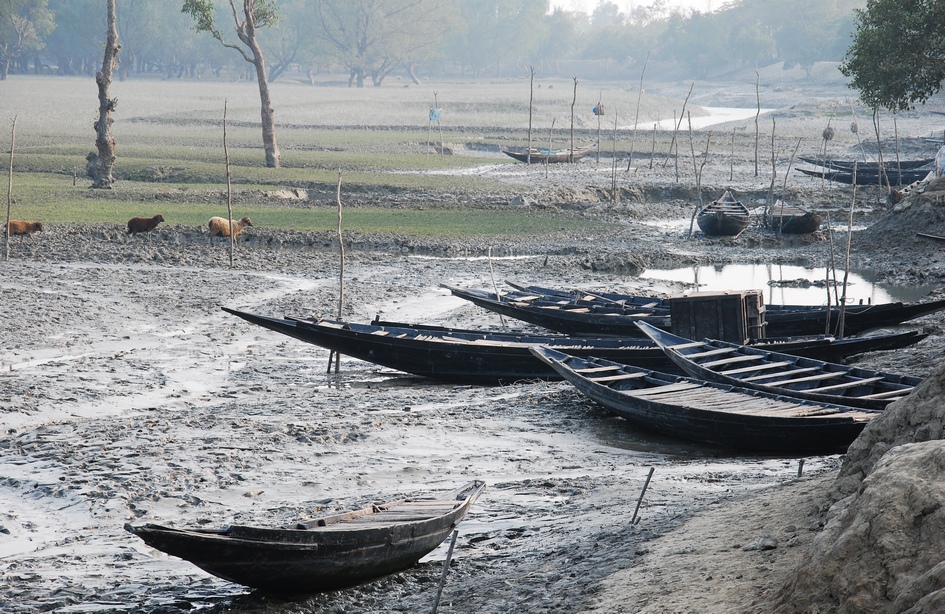 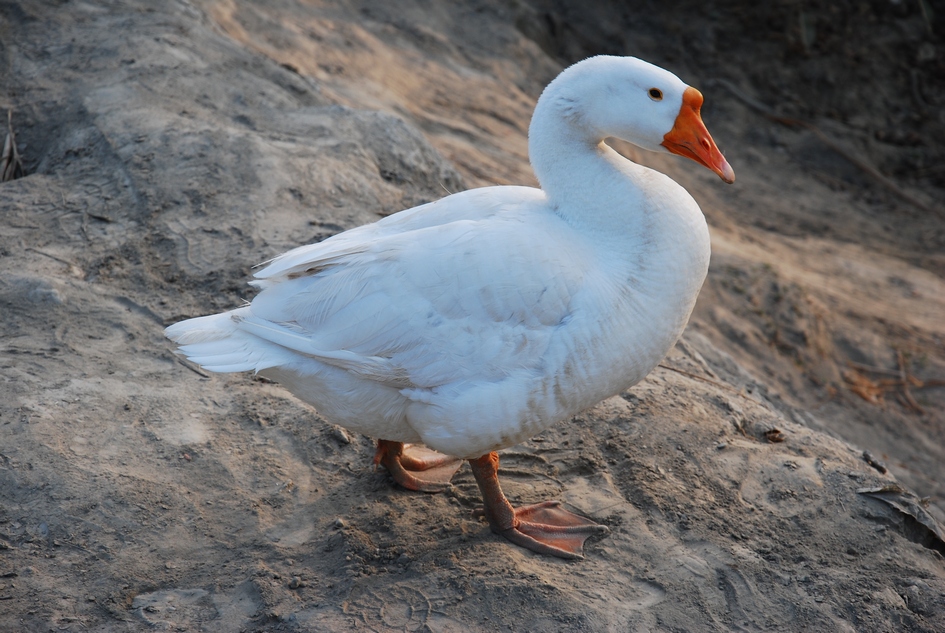 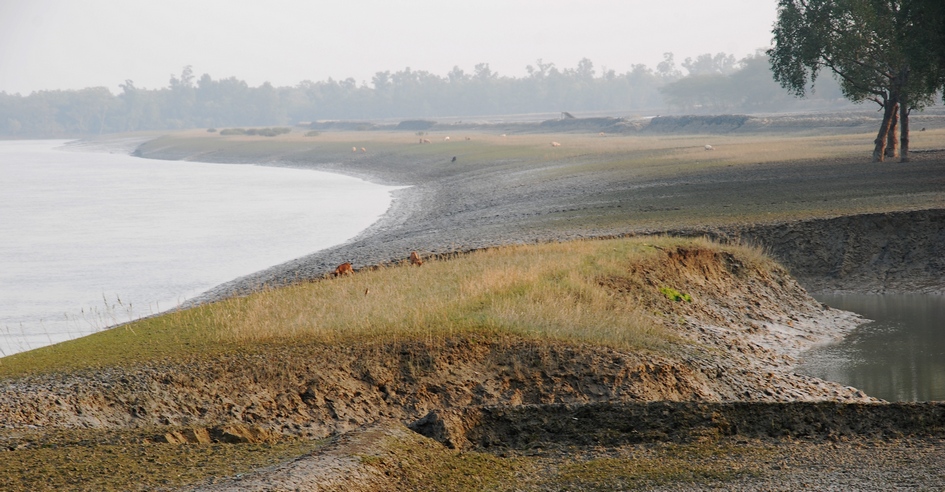 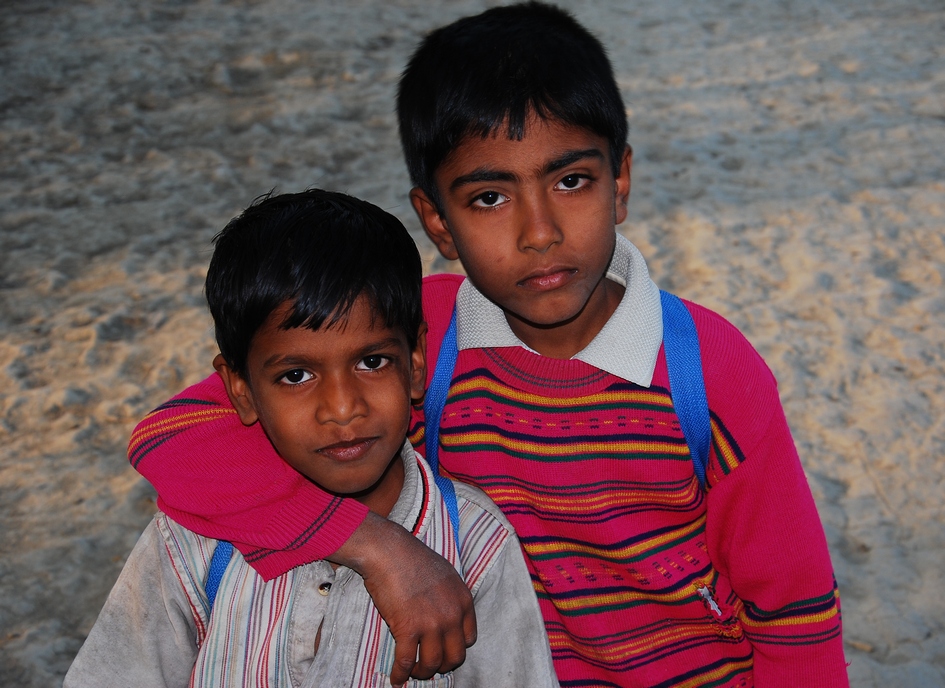 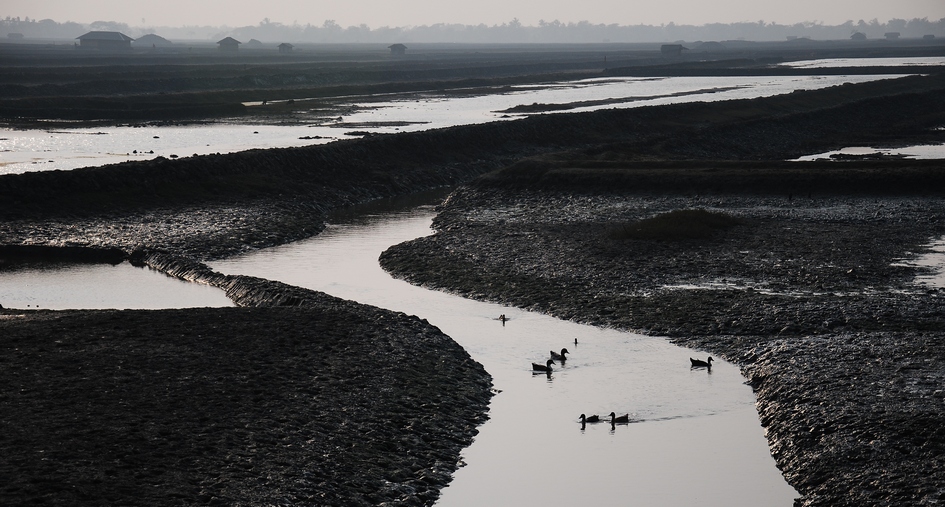 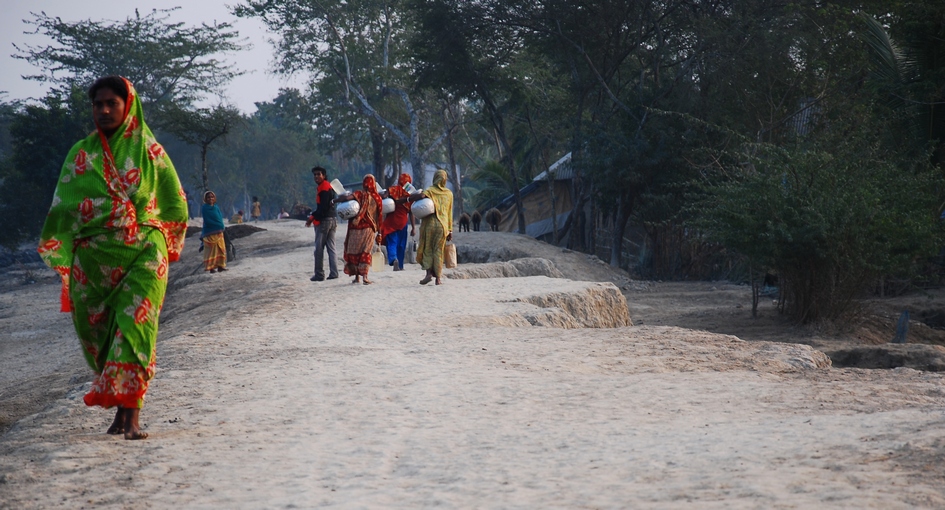 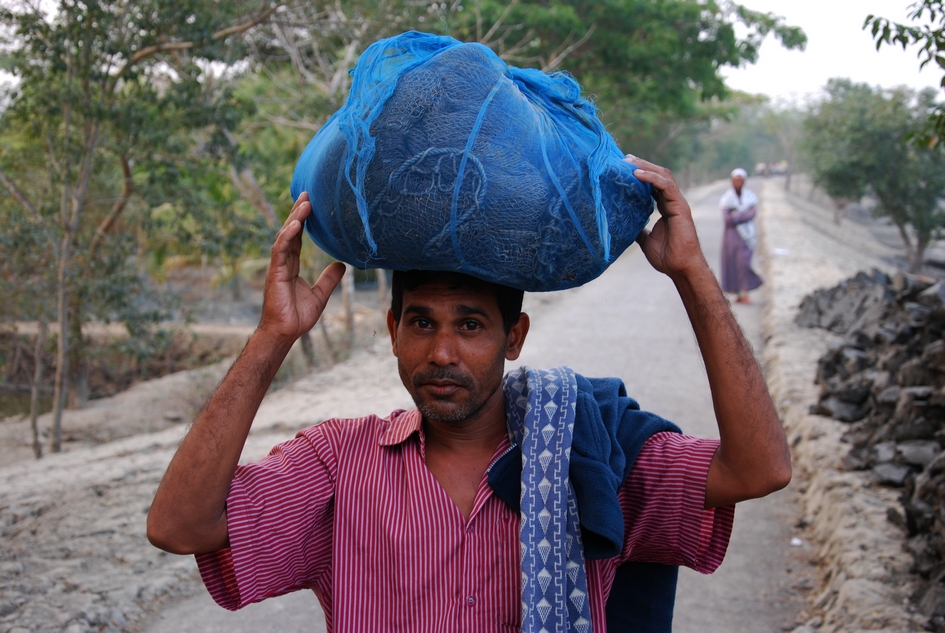 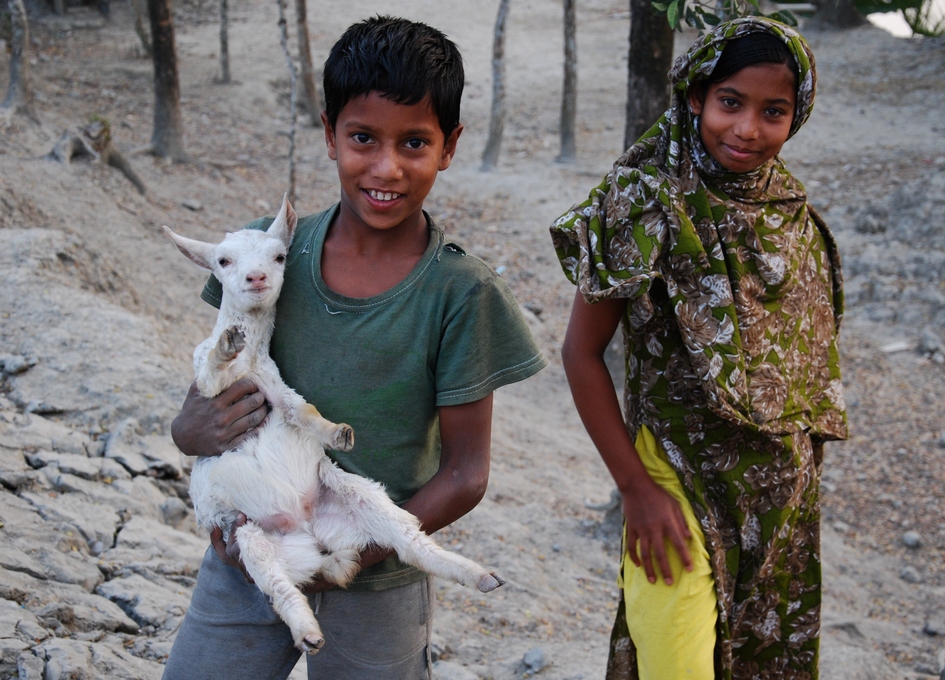 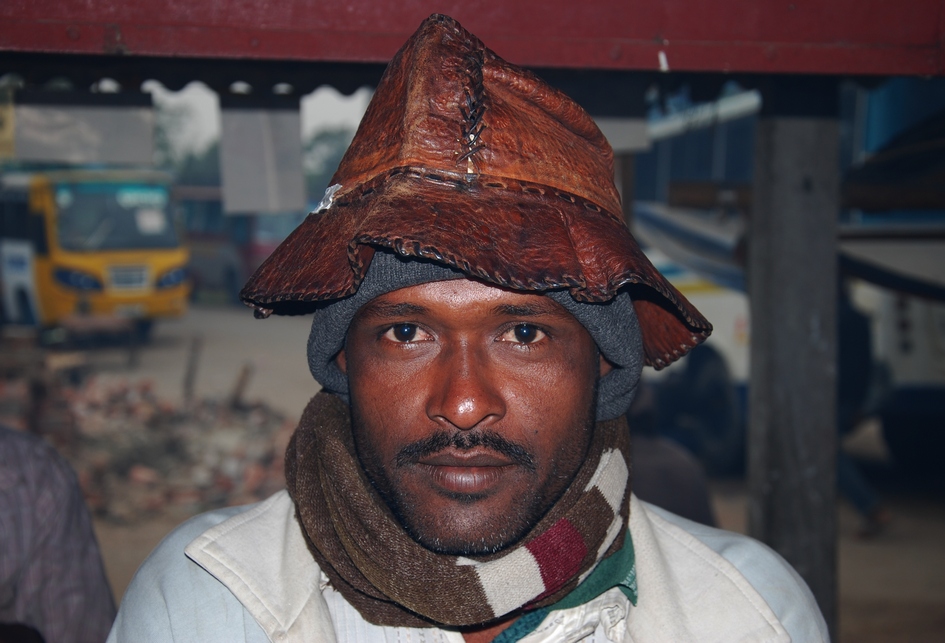 As I strolled along I received the call from Elizabeth.  People had spoken with people and I should be good to go as far as permission into the Sundarbans. She advised me to go immediately to the Forest Office to work out the permit for the following day but it was a bit late to make the journey. I thanked her profusely and crossed my fingers, toes, eyes, ears, and testicles.
Posted by Rich at 8:56 AM