Jan 22nd, 2010 - Shall I try this again? Yes, yes I shall. The next morning, after the obligatory tea interlude, I hopped on another motorcycle and made my way back to the forest office confident in the knowledge that my connection with a preeminent Sundarbans researcher cleared the way for my journey. When I arrived they had no idea what I was talking about as no one there had received any call.  As I am no longer capable of surprise I barely flinched. 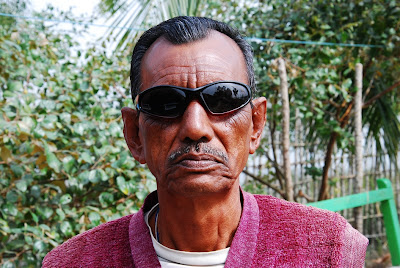 When asked about my purpose I again repeated my desire to voyage into the mangrove forest. I had not met this gentleman the previous day and he appeared to be amenable to the prospect. The guy I did speak with turned up later but offered no protest. So, even though absolutely nothing had changed as far as they were concerned, I was now being given permission to enter the forest. Why not? It was a whole new day.

After paying the requisite fees I was provided with two armed ‘guards’ and a local boatmen.  To the river’s edge we headed where we boarded our vessel and set off. I was told that three hours would be my maximum allotment.

I can’t say the journey was very fruitful. Although it was nice to enter the forest once again we did not go very far inside and our route was down a fairly wide channel. In other words: I had a better chance of seeing Pegasus than I did of seeing a tiger. On top of that my crew was not a picture of motivation. No one spoke English so there was little chance for any sort of meaningful exchange.  After repeated requests to turn around I finally agreed. I was hoping that we would be visiting another area of the forest as we were still well under our three hour limit.

On the way back we did stop at a forest station which I assumed (emphasis on ‘ass’) would lead to some sort of jungle walk. However, when we arrived one of the permanent staff members stationed there told us we could not utilize the walking path nearby due to the presence of tigers. Too dangerous. Too dangerous? I had two dudes with rifles for the love God!!!  Was this not the point? Ahhhhhhbluggggggahhhhhfooooooey!!!!!!!!--That was my internal dialogue at the time.

Ok, so a fisherman was attacked and killed the day before? Is that any reason to panic? Come on!!!  I hardly think that Tony the Tiger was any match for a tall skinny white guy and two terrified forestry guards with weapons that may or may not function properly, may or may not have be loaded, and which they may or may not even know how to operate.  So I stood there peering down the forbidden trail that led to intrigue, adventure, and possibly, although improbably, one of the most magnificent creatures on this planet.  This was probably the best chance I ever had. If that furry misfit really did have a taste for Mr. Homo Sapien then perhaps he would be drawn by our appetizing fragrance. I felt like walking into the forest while ringing a triangle and screaming, “COOOOOME AND GET IT!!!!!!!!”

Yes, I am well aware how ridiculous I sound but all facetiousness aside let’s be objective: A lone fisherman attacked while preoccupied with his duties is not the same as three individuals walking through the forest with two rifles and a pulsating sense of hyperawareness. Everyone in the area is so scared of tigers that they’ve turned this kitty cat into an insidious Grendel-type figure (does that make me Beowulf?).  The danger is real but everyone behaves like we’d be walking through a tiger cage with deer meat tied around our necks.  Then again, I could be a delusional adventure seeking jackass.

Resistance was futile. I was tempted to resort to bribery but that would put me in that class of obnoxious western a-holes whose ranks I am not quite ready to join (I am getting there).  Besides, how would I feel if something did happen and injuries or death occurred because I had to satisfy my ‘Look, Daddy! A Tiger’ curiosity.  Someone else can have the Dipshit Award. For now I’ll sit in the corner and pout. Poopy. 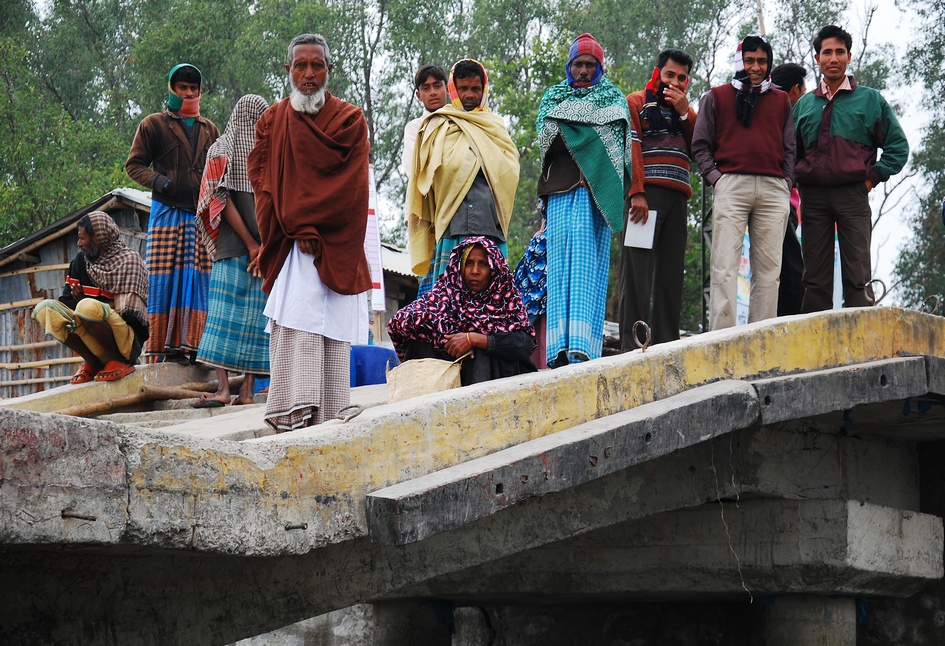 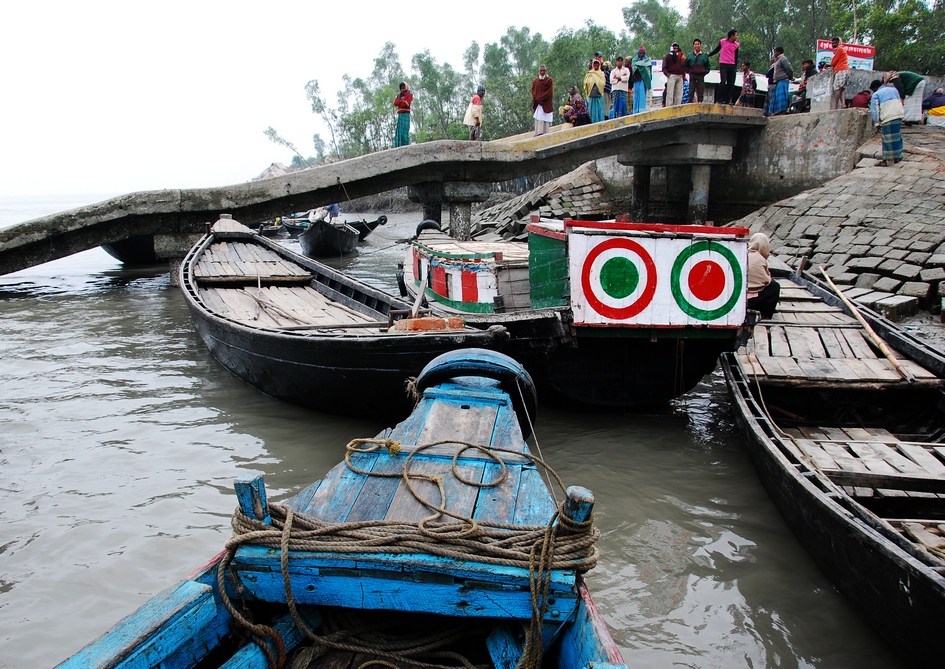 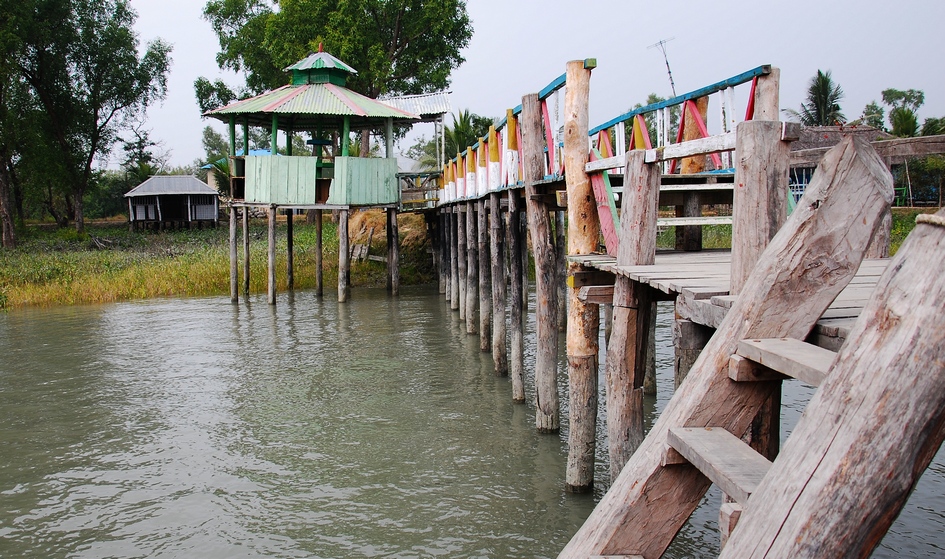 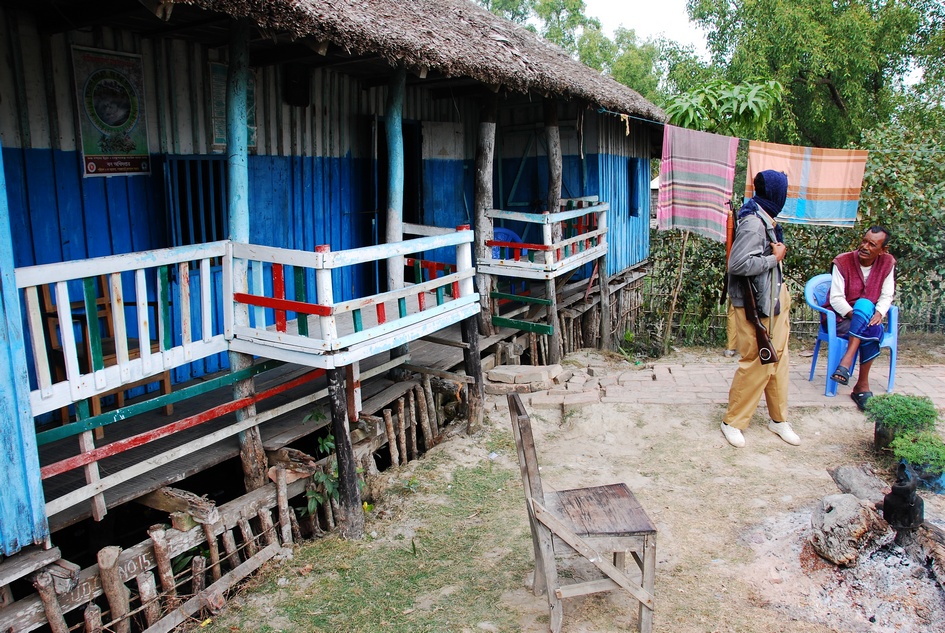 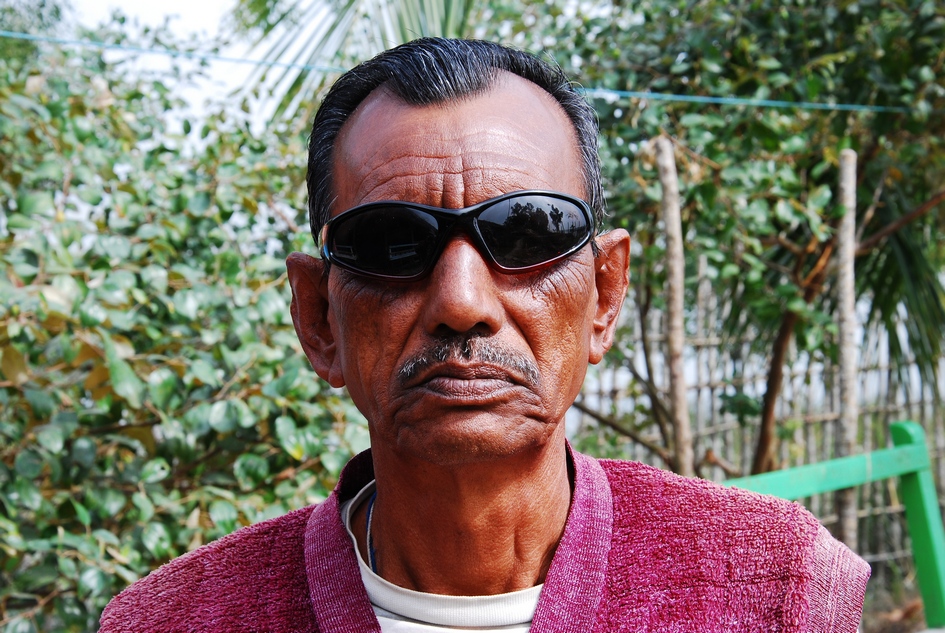 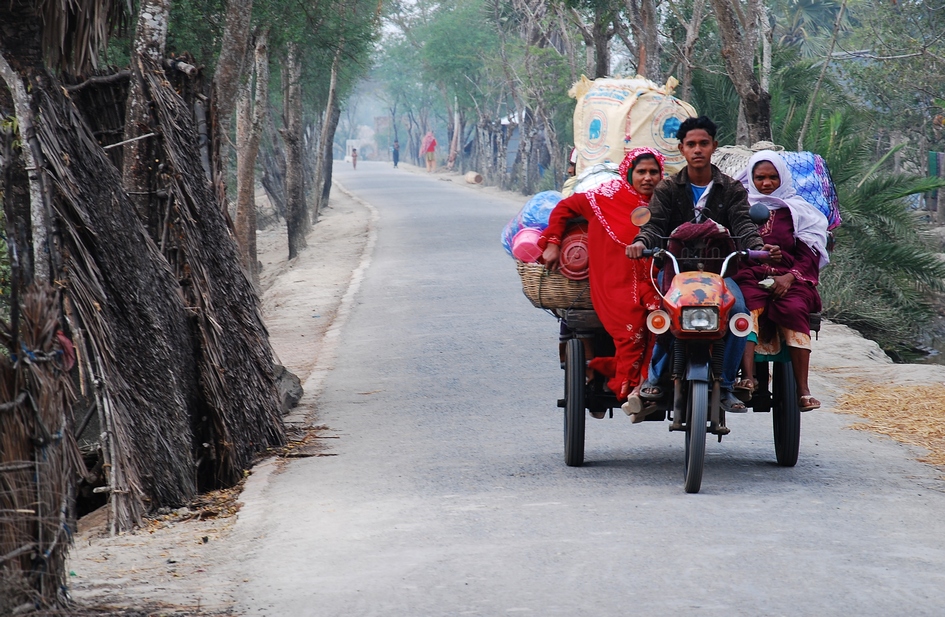 With a truncated foray into the Sundarbans complete I headed back to my guesthouse. Decision time. I did not want to leave. I wanted more, much more but had to face reality.  Getting someone to take me into the depths of the forest and providing any opportunity of seeing a tiger was next to nil. Most folks were afraid of tigers, pirates, or both. Asking them to find a tiger is like asking a chicken if it would enjoy a tour of a fox den. And then there is cooperative nature of the Forest Department. Obstacles abounded but I have to admit that it may have been possible to surmount them. Had I persevered and kept at it is quite possible I may have found a fisherman or some other boatmen willing to take me within for a price. I am a little disappointed with myself for not trying but in the end a cost benefit analysis put me on a bus back to Dhaka.

Just a short, painless seventeen hours or so on three different buses and I found myself back in Dhaka.  Yippee-skippee. Along the way I spent a spell waiting for my midnight bus from Jessore to Dhaka.  For reasons I cannot explain the office of the bus company (Greenline) was peopled with folks that have no intention of riding a bus. It appears to be the Bangladeshi version of an American barber shop; a meeting place for local gents to discuss whatever happens to be on their minds. And that would have been me as soon as I walked in. The usual interrogative about my personal details ensued and a pleasant conversation followed.

One of these gentlemen in particular sparked my interest. He spoke no English but it was clear that I sparked his interest as well, for he barely took his eyes off me. Clearly this was a hard man with a history behind those eyes (indeed, he appeared to be somewhere in the neighborhood 60 years old).

I soon discovered, from the fellow sitting next to him, that he was a former member of the Mukti Bahini (Bangladesh Freedom Fighters).  After the subcontinent was partitioned by the British this country became part of Pakistan and was known as East Pakistan.  About the only thing the East and West had in common was Islam. That is where the similarities ended. It all started to collapse when the main political party in the East, known as the Awami League, won elections and should have been allowed to form the government of all of Pakistan.

Instead, the opening of the National Assembly was postponed and the Awami League’s political leader and the father of Bangladesh (who should have become prime minister), Sheikh Mujibur Rahman, was imprisoned. Troops were then sent to the east to quell dissent. It was not pretty and their tactics were as brutal as it gets (See also Bangladesh Liberation War).

The man now sitting nearby was one of the folks on the front lines who, with the help of India, defeated the Pakistani Army and won independence for what was to become the country of Bangladesh. And frankly his face said it all. Both of us wanted to engage each other more intensely but the language barrier prevented this, which is a real shame as I am certain his story is a fascinating one. 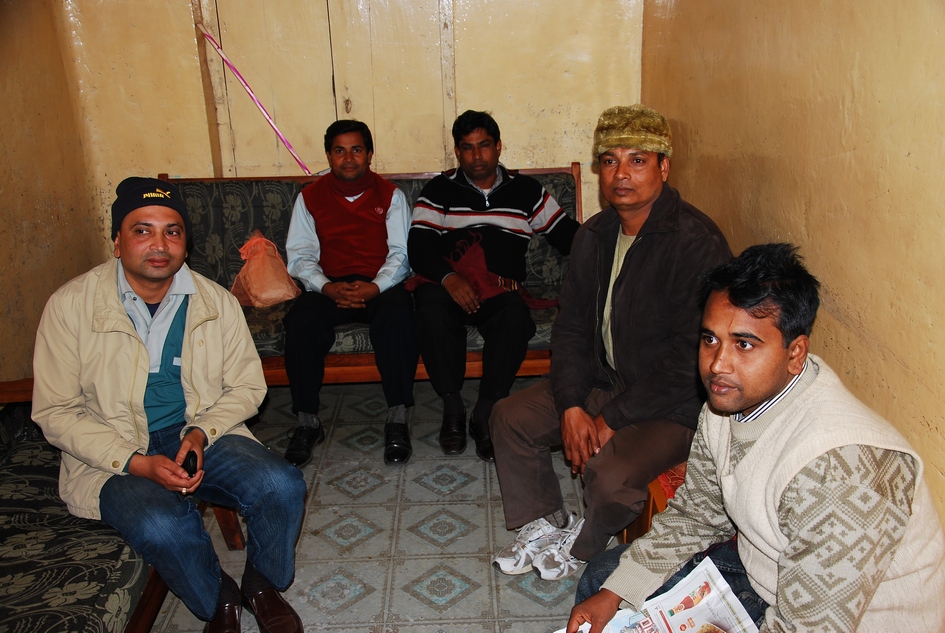 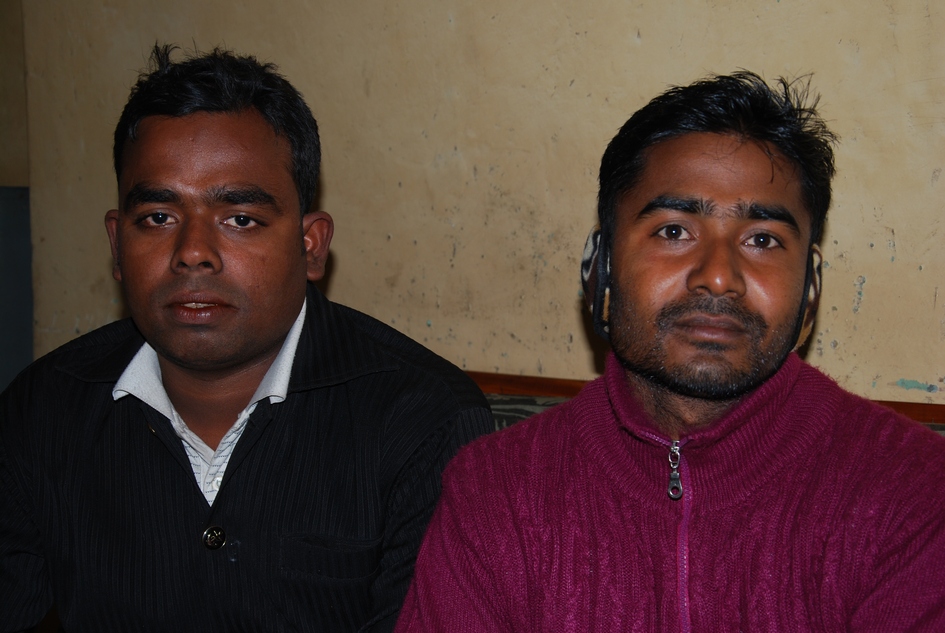 As I had two hours or so before my bus departed I went for stroll in search of reading material. I had little hope of finding books written in English but thought I would give it a shot none the less. A few days before, while riding a bus, I remembered feeling a little bit like Gulliver stranded on the island of Lilliput due to the near impossibility of sitting upright in one of the seats. Well, when I walked into a small book shop stocked almost entirely with books written in Bengali and asked if he had anything in English you can imagine my surprise when one of the books he took from the top shelf and dusted off was none other than Gulliver’s Travels.  I’ve never actually read it so I accepted Fate’s reading suggestion and purchased it immediately.

My six hour bus ride back to Dhaka when adjusted for inflation actually took twelve. Fog on the river delayed the ferry. Once again Valium to the rescue.  When we did finally arrive I was pleased to discover that the last stop was a good hour away from my hotel in Banani. Muchas gracias.

So now I needed to get a taxi to finish the trip. A business man offered to share a CNG (autorickshaw) with me which I gladly accepted. It would have been nice to know that his destination was nowhere close to mine even though I clearly indicated the Banani area of Dhaka. So I was treated to a superfluous hour and a half tour of Dhaka. Along the way he got out and his friend/coworker got in, after which we proceeded to make business deliveries (my first copassenger loaded packages into the rickshaw) on his behalf.  I’d been sitting on buses for over 17 hours. This was exactly how I wanted to ease my way back into the chaos that is Dhaka. I’ve already mentioned that cruising around in a cramped, caged-in CNG is like stuffing yourself in a motorized birdcage and having a bumper car rally in an asphyxiating dust cloud.  Welcome back.