Jan 11th, 2010 - One more shot at Tiger Island, this time aboard the small country boat. These small wooden vessels have two advantages: They're small enough to navigate some of the smaller channels and a lack of a motor helps minimize noise pollution. In order to ensure that we could go as far as possible we had to enter during high tide. Otherwise, we'd just we pushing our boat through the mud. At around 7:30 am we headed in.

It would be inaccurate to emphasize a complete feeling of isolation. The sad truth is modern intrusions are never far off often underscored by the obnoxious chugging of a fisherman's motor. Still, as you slowly enter a narrow channel with a haze obscured sun rising above the trees, a ghostly mist hovering above the water, and the chirping of birds piercing momentary silences it is easy to believe you are entering a magical land.

As we penetrated deeper along the channel the only real sound (notwithstanding the periodic encroachments) was the boatman's oar lapping at the water. Heeeeere, kitty, kitty, kitty. At times it was necessary to duck beneath the vegetation protruding over the water. The mud banks were lined with the tracks of spotted deer and wild boar as were the trails these animals wore between trees and through the grass. Every time the brush cleared a bit or the grass parted enough to have a peak within I held my breath.

I held my breath in hopes that as a small clearing came into view perhaps I would spot the object of my dreams but each time I was disappointed. I know they were there………..somewhere. Why must you torment me? One of the most haunting aspects of any journey into the Sundarbans is the constant swaying of nipa palm leaves. As the wind permeates the crevasses of the mangrove these rigid leaves scrape against one another producing a sound akin to someone quickly darting through a doorway covered by vertical blinds. No matter how many times you hear it there is always a split second when you think some denizen of the forest has come crashing through the undergrowth as if to declare its presence with defiance.

We continued on until the channel either became too narrow or the underbrush too thick. There were many pauses along the way to just sit, listen, and wonder. It was magnificent. I mean, its Tiger Island for the love of God. After another fruitless (at least as far as felines go) search down a different channel we returned to the boat for a meal and then set off for the Kochikhali forest station. 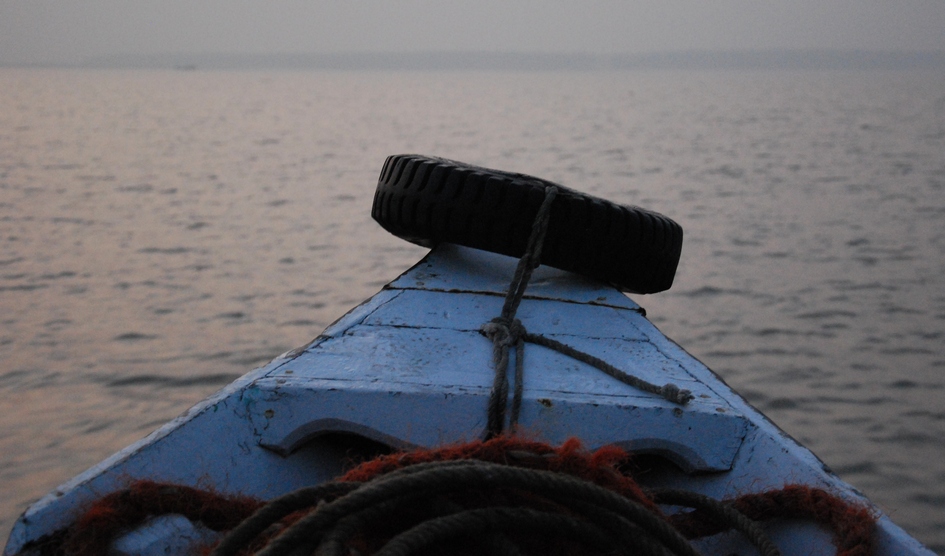 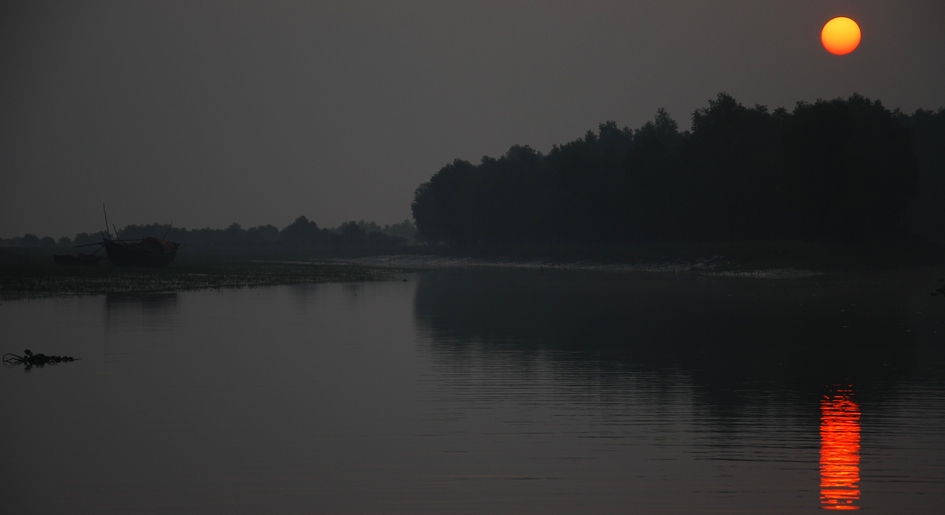 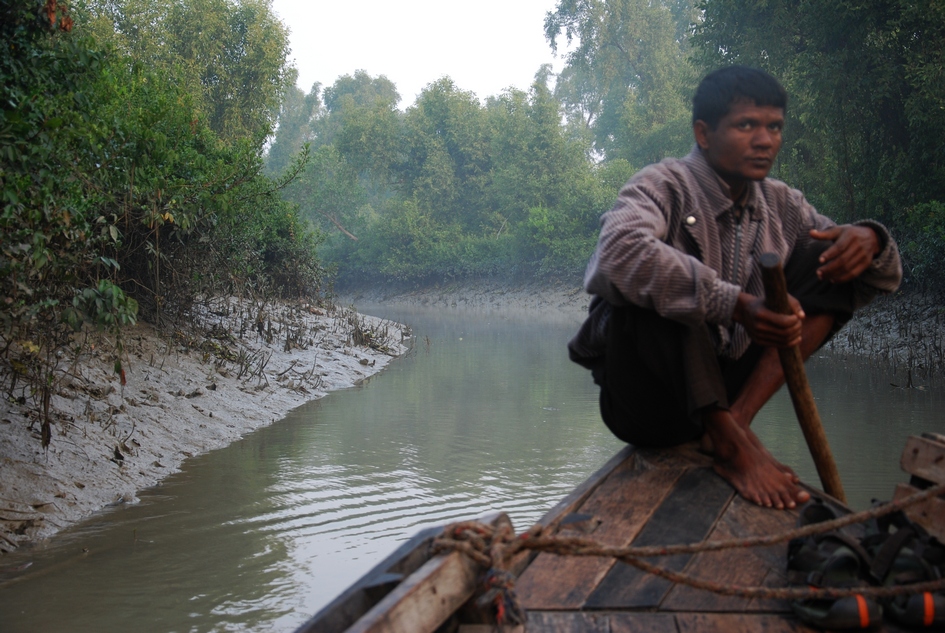 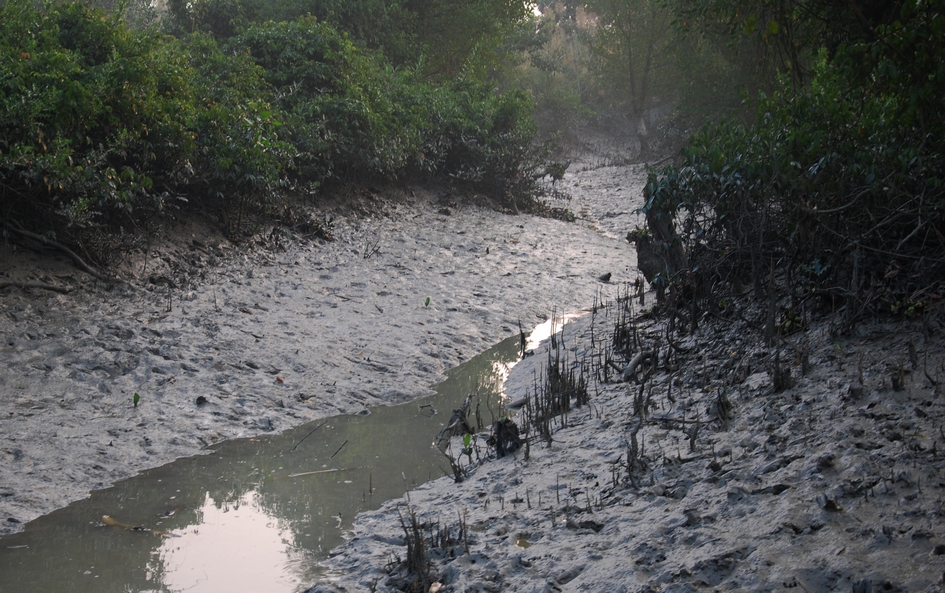 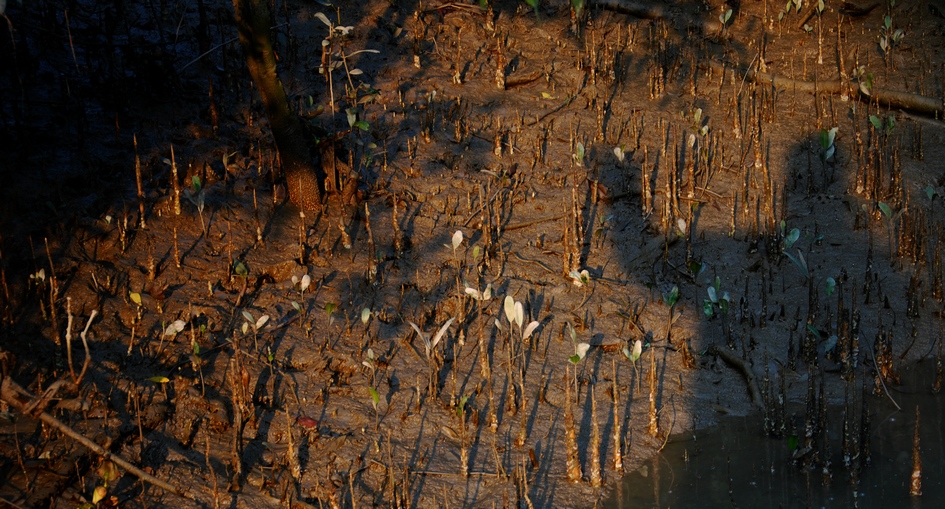 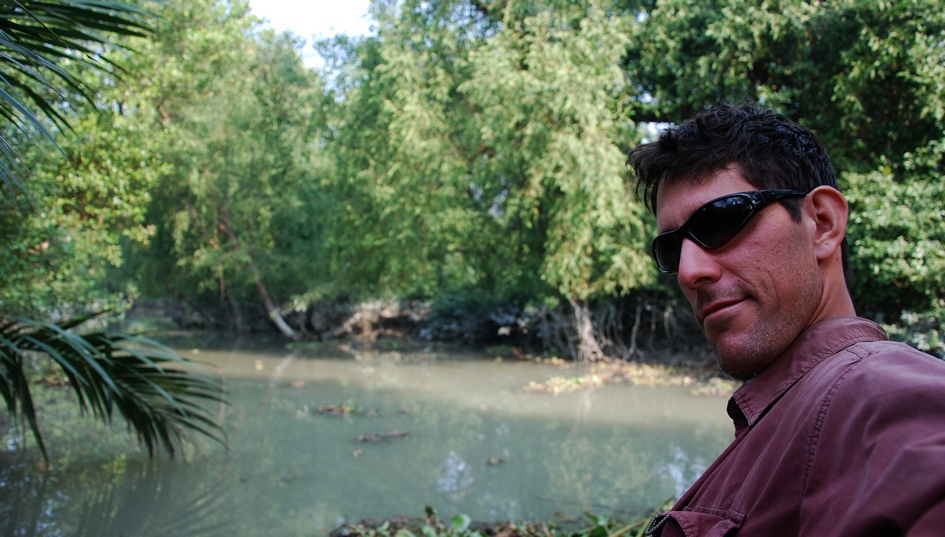 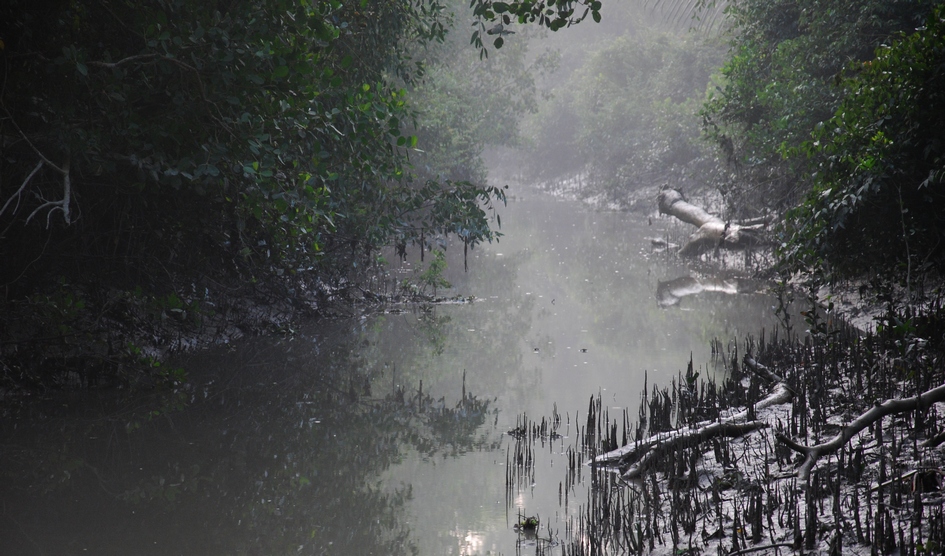 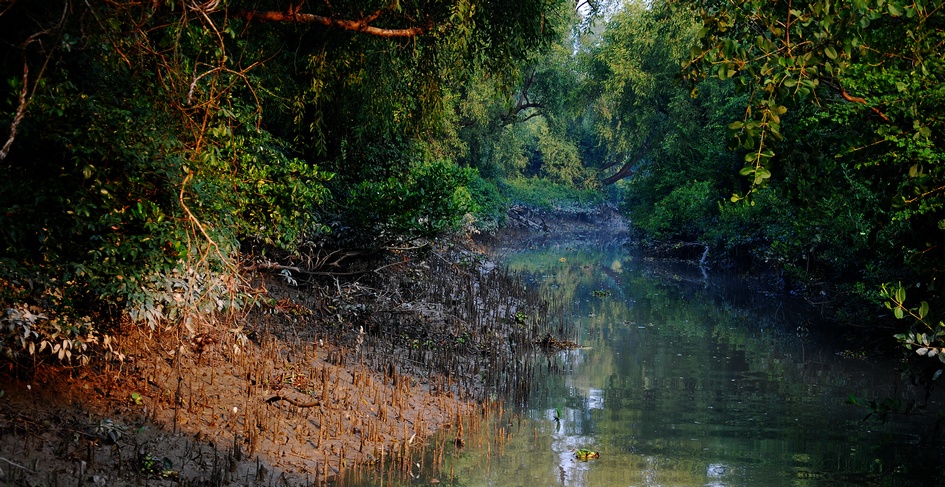 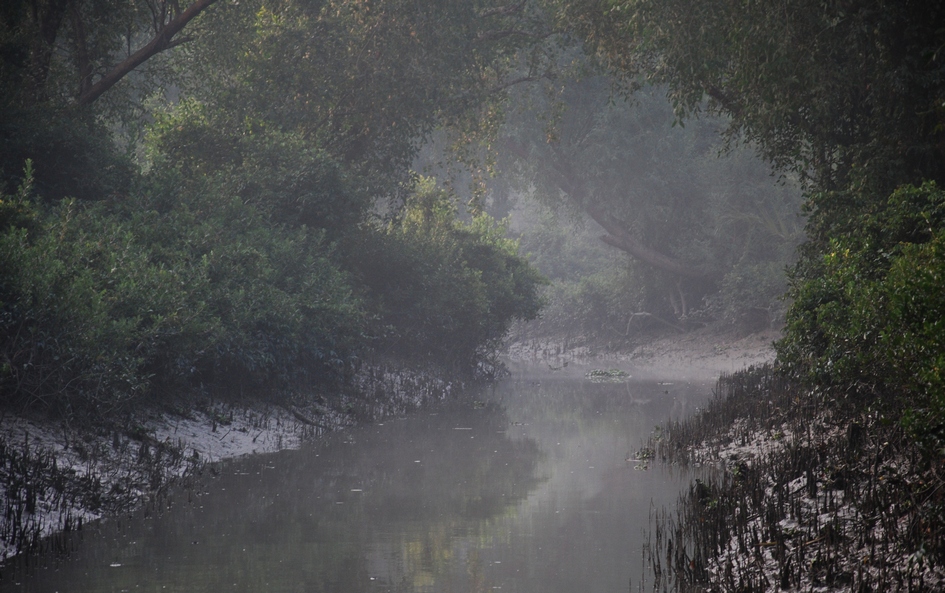 We thought one more beach run was in order so we walked the reverse route, this time from Kochikhali to Kotka Beach. I doubt I could ever get tired of that walk. Along the way we saw some boar scavenging the beach for food. I did the only thing I could: I tried to race them to the tree line. They won but I did manage to get a blurry photo as I sprinted along. Ansel Adams I am not. What can I say? More of that 'child within' thing….I think. Either that or I'm a nutbag. 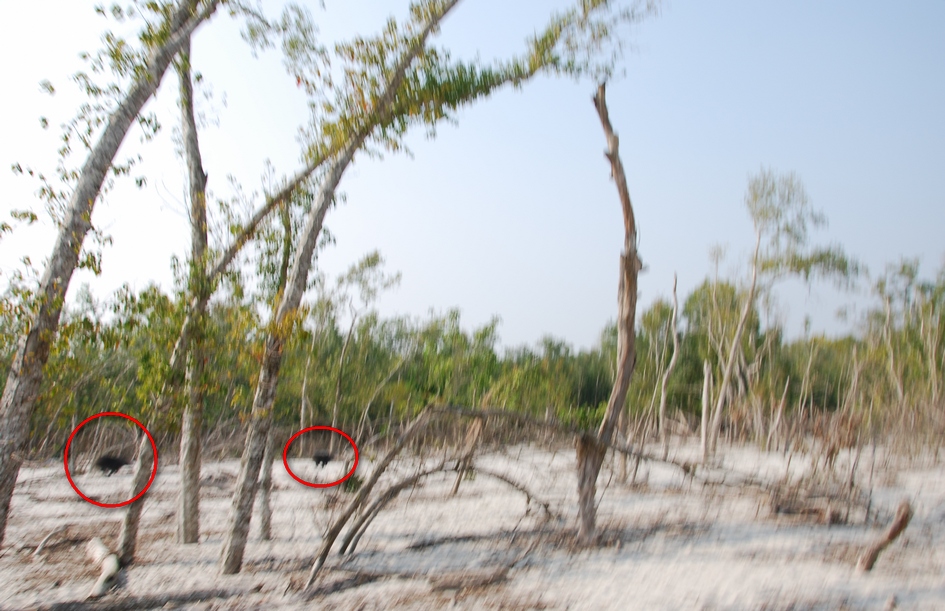 We hopped on our boat and made our way back to Kochikhali. There we went aboard one of Guide Tours' larger boats to meet up with some other tourists (mostly folks in the international development/aid field) for a bit of New Years reverie. We joined some Swiss, Germans, Brits, Russians, Australians, and Dutch for a delicious meal and some alcoholic jubilation. The festivities began with a game of…well.. I'm not sure what it is called. Everyone writes down the name of a famous person on a small slip of paper. The slips are mixed into a bowl. There are two teams. Turns are taken during which one team member describes (without using the name) the individual on the paper while the other team members try to guess. You have thirty seconds to guess as many as possible. A Russian woman drew the name Rene Descartes. She yelled out 'German philosopher!' (actually, he is French) and a member of my team yelled, 'Adolf Hitler'. The German guy was not amused. I almost pissed my pants with laughter. I suppose that technically speaking Mr. Hitler was a philosopher just not the one that pops into mind when attempting to list Germany's greatest thinkers.

The festivities moved to the beach near the Kochikhali forest station where at least fifty people gathered around a rather robust fire. It included families with children. At one point some of the kids were scavenging the tree line for firewood…..alone. Ummm..tigers anyone? I'm sure its fine. There was a guy present (I forget his nationality) wearing his version of traditional garb. We were told he was not eating until he saw a tiger (It had been two days). Get a grip. Best of luck to ya.

For the first time in my life I had the pleasure of ushering in the new year twice in one evening. Apparently, Bangladesh gave daylight savings a whirl. I guess it just didn't take. Some of the folks at the party told me that the result was minor chaos in the form of persistent tardiness. Its not easy living in the future. So the government decided to return to the present and, oddly enough, chose midnight on December 31st as the moment of truth. So we raised a glassed, welcomed in the new year, turned back our watches an hour, and did it all again. I think they should do that every year but, then again, who the hell am I?

Remember that bottle of whiskey I acquired in Dhaka? Gone. And just to seal the deal the Brits we met offered us donations from the mini-bar they brought with them. The last time I drank that much the police showed up. Oops. At one point I asked a woman if she was single. Then I asked her why. Smoother than baby oil on a newborn's ass. She went to bed alone.

The next day was rather uninspiring due in no small part to the whiskey. The schedule went as follows: breakfast-nap-tea-nap-bathroom-nap-lunch-nap-nap-nap-passing thought of going somewhere-nap-dinner-nap.

The remaining days of our journey were spent headed back north stopping at a forest station or two along the way. We continued to explore some smaller channels with our country boat but with the exception of two crocodiles, a monitor lizard, some birds, a couple of river dolphins, and few monkeys we saw very little. We did, however, manage to scare the poop out of some local fisherman while on an evening excursion in the country boat. It seems they thought we were pirates and had fled their boats in favor of the forest. Perhaps, I've missed my calling. At least I have a fall back. I am now accepting applications for buccaneers. E-mail me your resume and a headshot. No eye patch required. Arrrrrrrgh!!!! 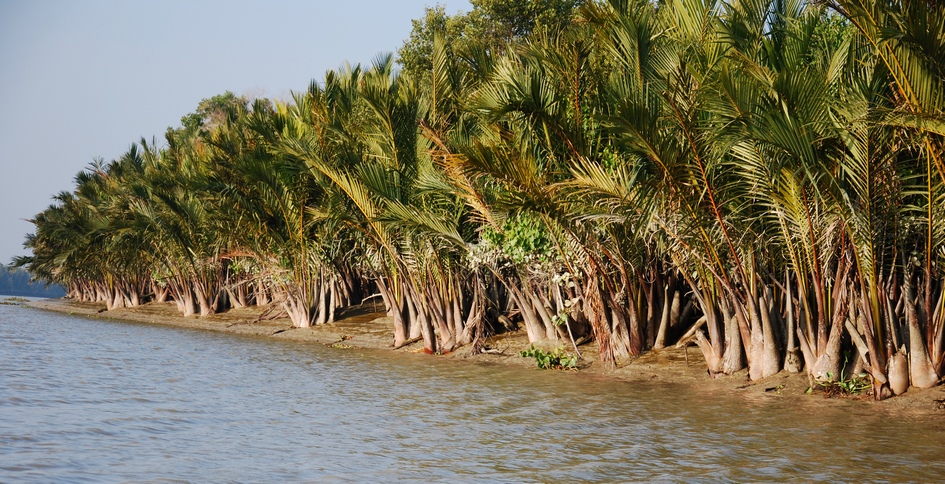 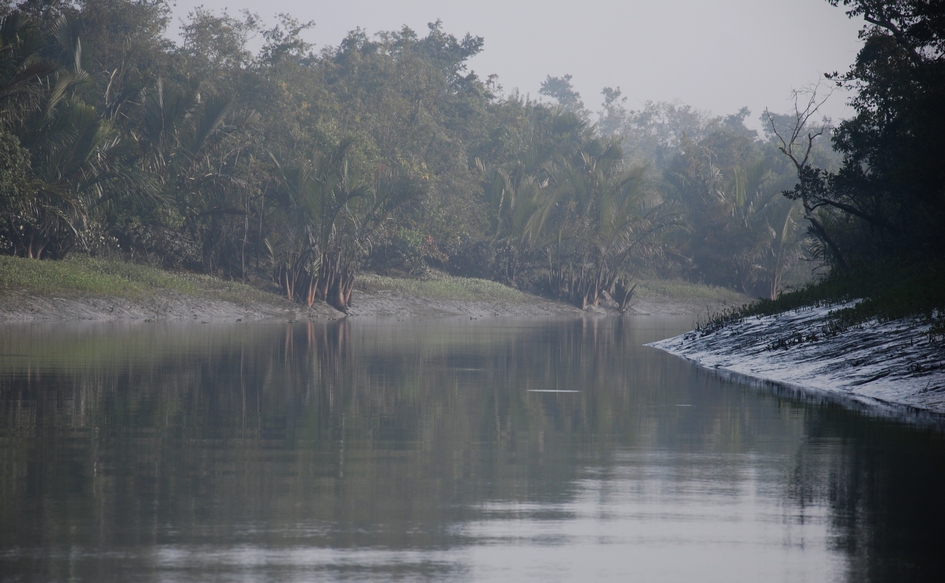 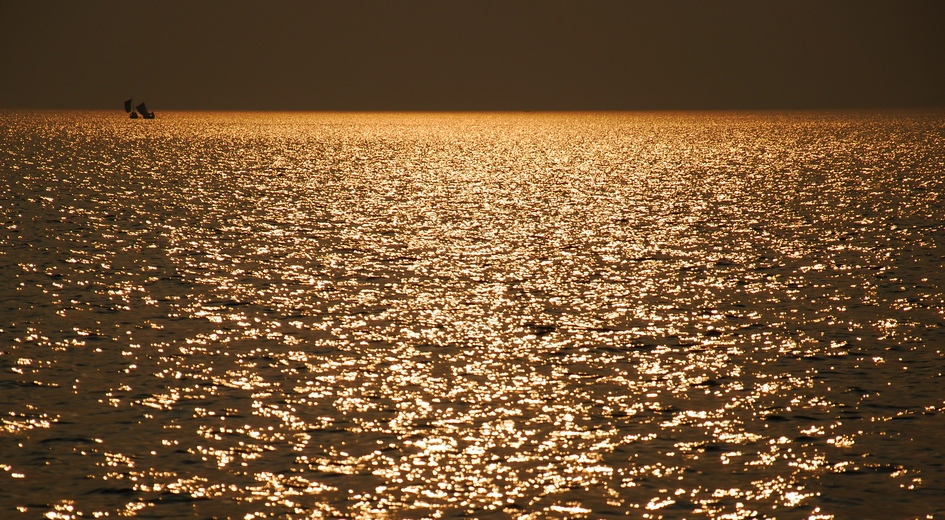 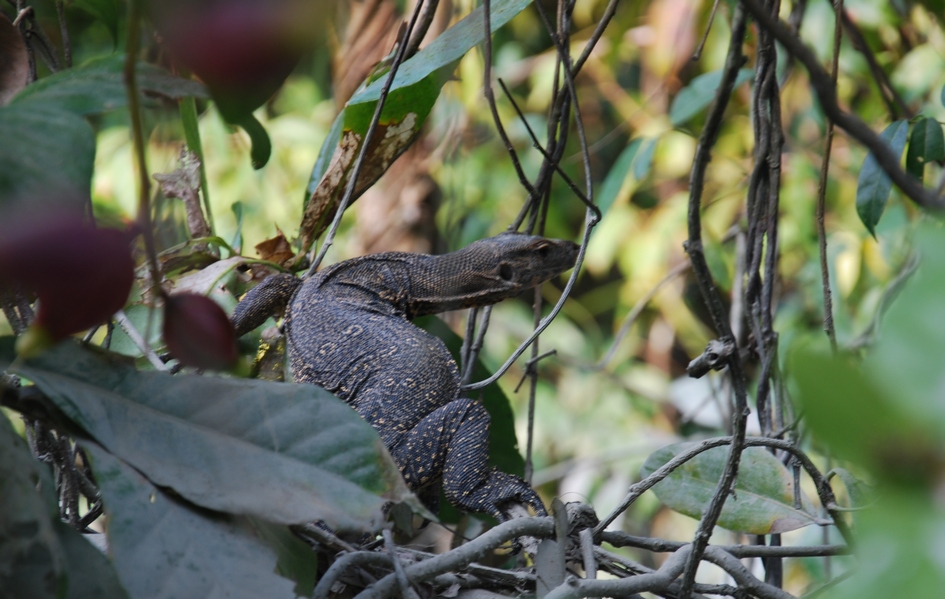 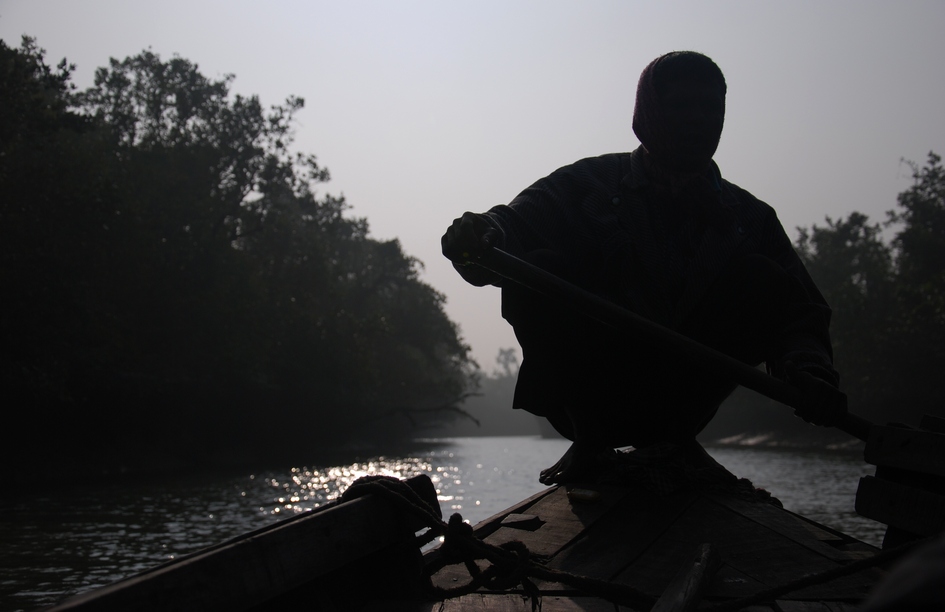 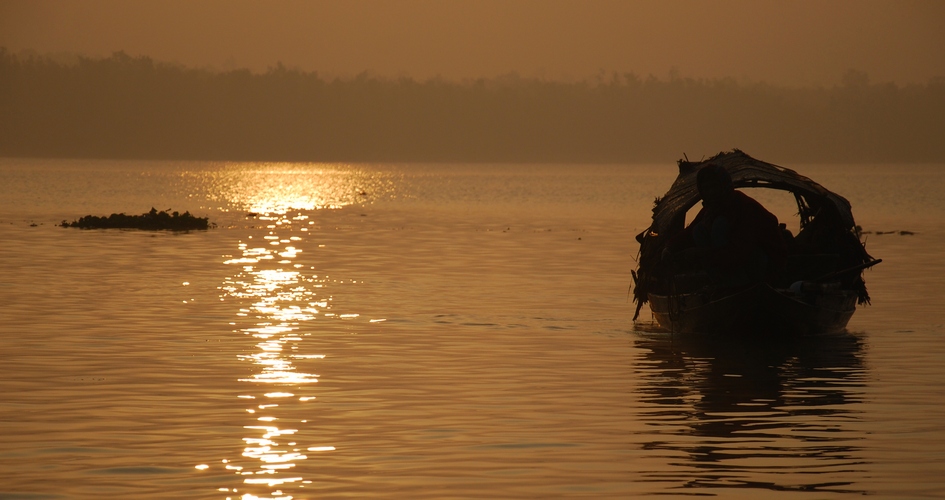 As is the norm with trips like this we were given a guestbook to sign for future occupants of the R.B. Emma to read. Alex (or should I say Picasso) included his artistic representation of the whole gang. He was also kind enough to make an entry on my behalf. Allow me to translate if the picture is not clear:

"My name is Rich Poomadore ('Poo' being a direct reference to the flatulent effect the food had upon me). I am 34 years old and I like tigers. My mum says I will have a wife soon but I'd rather have a tiger. Maybe I can have both. Also, thank you for the trip." 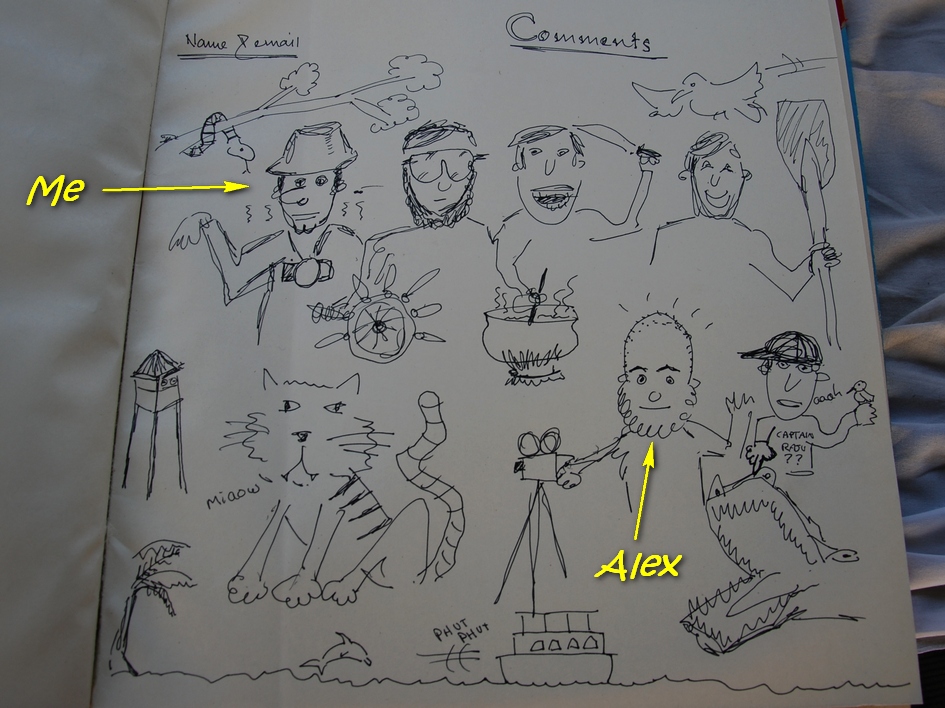 One more night in Khulna, another all night train outing and I find myself back in Dhaka planning my next move. Decisions, decisions.
Posted by Rich at 9:01 AM