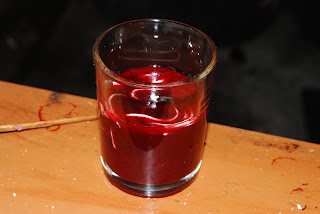 May 20th, 2009 – PETA would not be particularly proud of me, nor would Peter Singer for that matter. Chopping off a cobra's head, drinking a cup of its blood mixed with stomach and spinal cord followed up with a barbecued cobra satay dinner is probably not on their list of 'Ethical Ways to Spend Your Evening'. I have no defense. Curiosity killed the cobra.

I am in Solo (Surakarta) in Central Java. The guidebook mentions a restaurant by the name of Mas Mul serving up a hearty plate of cobra satay. Frankly, I could not help myself. I simply had to know.

The term ‘restaurant’ is a bit of an exaggeration. More like a food stand in the corner of a wide alley. Very basic. The guy serving up the serpentine delight was a grizzled fellow with a rather grave countenance. He did, however, get a real charge out of watching me down his gruesome concoction.

You could say the food there is fresh. Near the grill he has a bag, a bag full of live cobras. Where else would you keep them? He puts on gloves and dives right in there pulling out an angry serpent. He then puts on a bit of a show, waving his hands in front of the snapping, hissing, and generally cantankerous cobra (I am assuming the fangs have been removed). This is one of those times when you really have to question exactly what the hell is going on. In my mind I'm thinking, I'm about to eat the poor bastard. No need to add insult to injury by pestering Kaa.


The show is short-lived as the curtain quickly falls in the form of a butcher knife to the neck. However, separating the head from the body is not immediately acknowledged by either the head or body. Both continue undulating in unison for moments afterward.

The snake whisperer then drains some of the blood into a small glass, hangs the body on a hook and tears off the skin (body still wriggling). After the skin is removed it is time to dispense with the innards. The stomach and pieces of the spinal cord are also placed into the glass. I think that was the spinal cord. They also mentioned something about bone marrow but I was struggling with Indonesian so who the hell knows.

The glass. The glass contained cobra blood, stomach, spinal cord, and Red Bull. Why Red Bull? Why not? Probably something to do with improving the taste. It is believed that drinking the blood of the cobra increases virility. Nothing like serpent blood to give you an admantine erection. Screw Viagra. The glass was placed before me. I stared, I pondered, I weighed the pros and cons. I then downed the whole lot. Believe it or not it did not taste bad. I credit the Red Bull for that. I am not saying I want to serve it at dinner parties but the taste itself was not repulsive. It was the thought of what I'd just swallowed that made my stomach consider revolt. 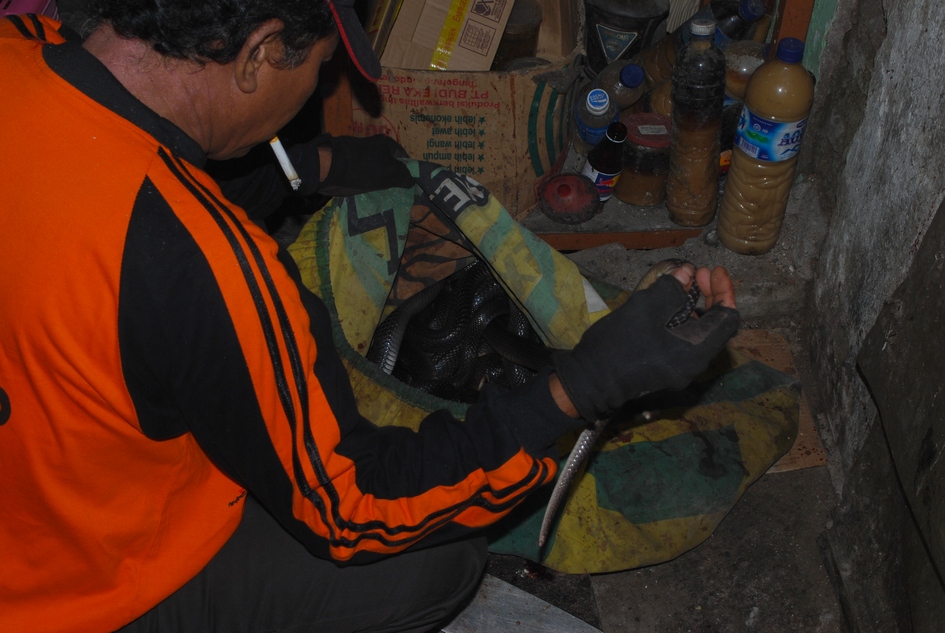 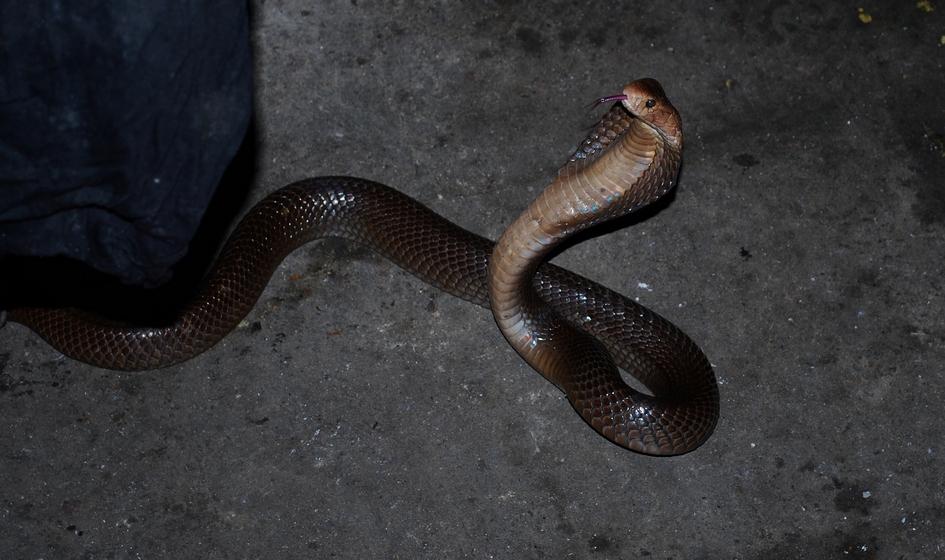 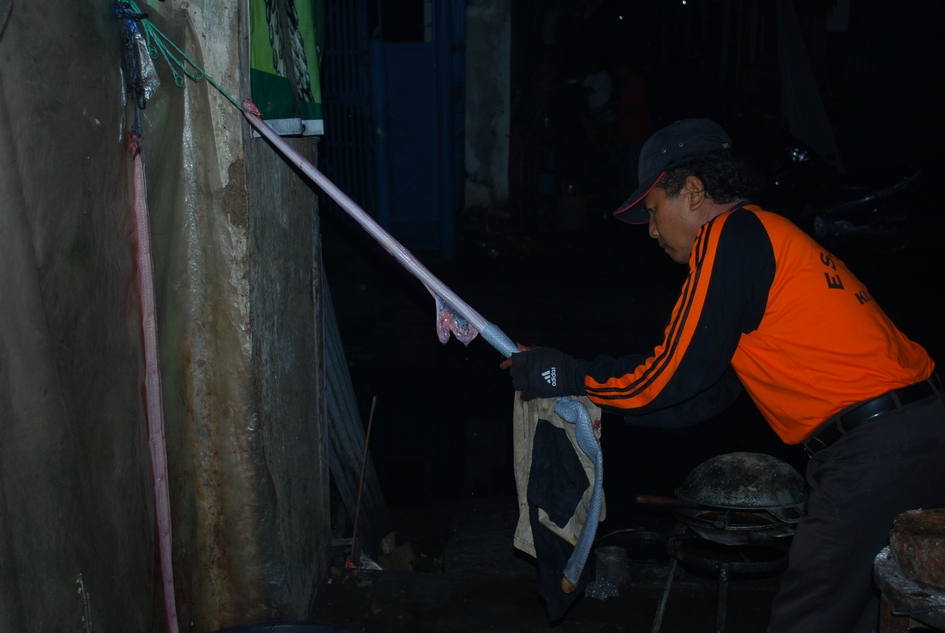 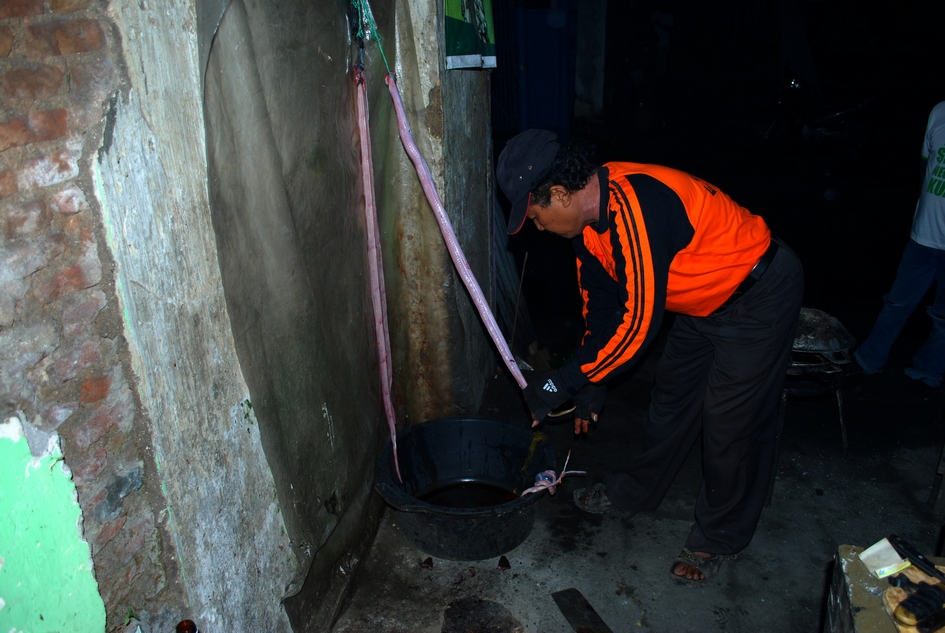 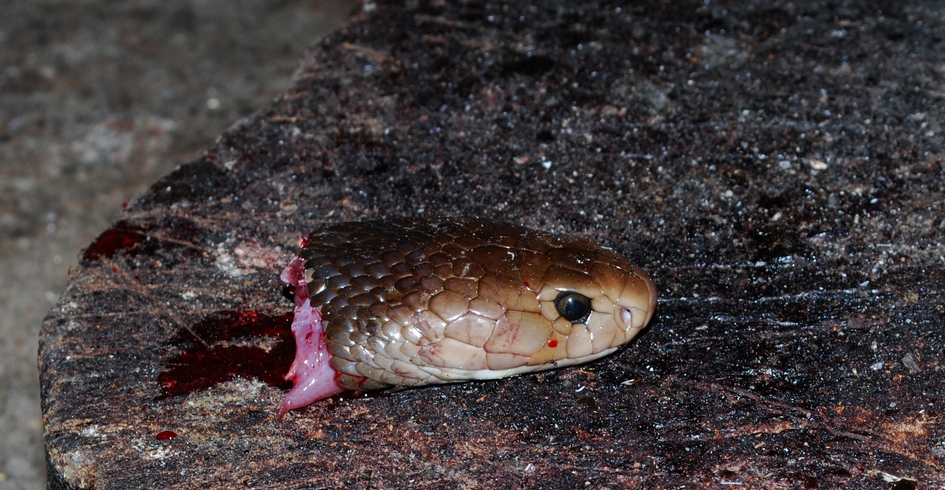 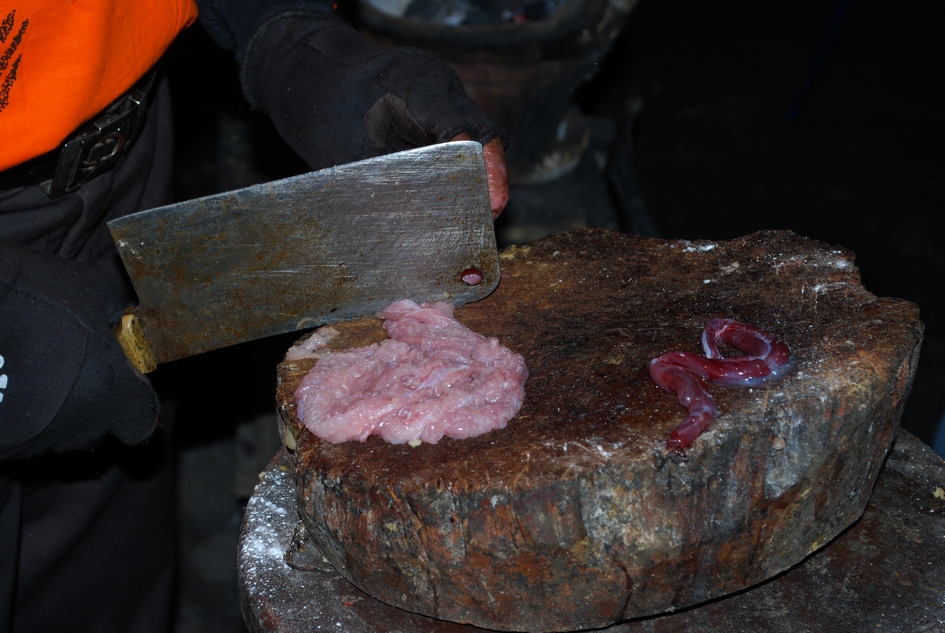 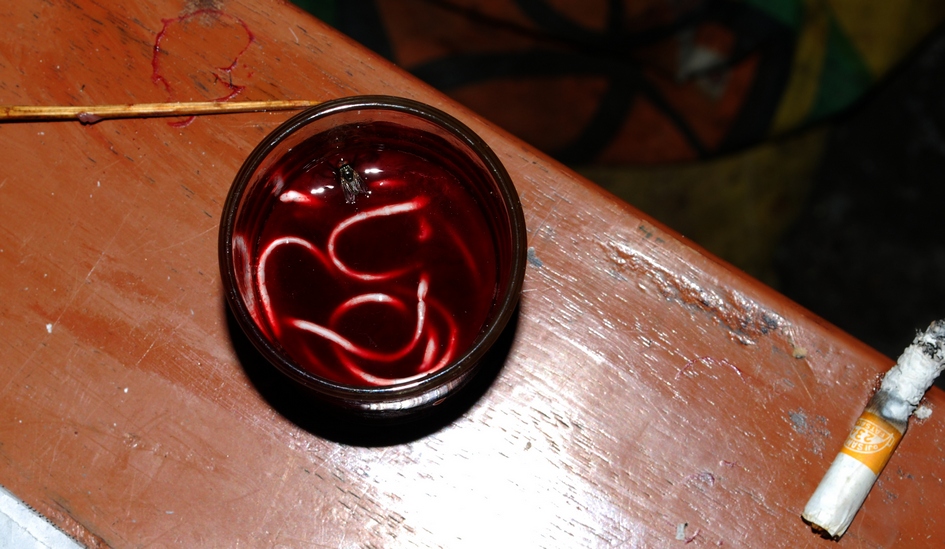 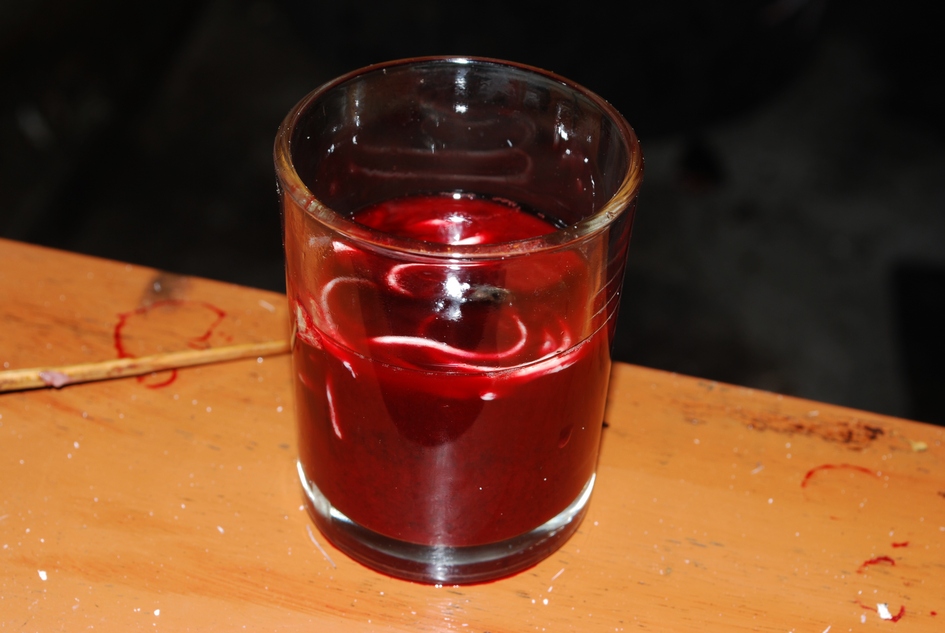 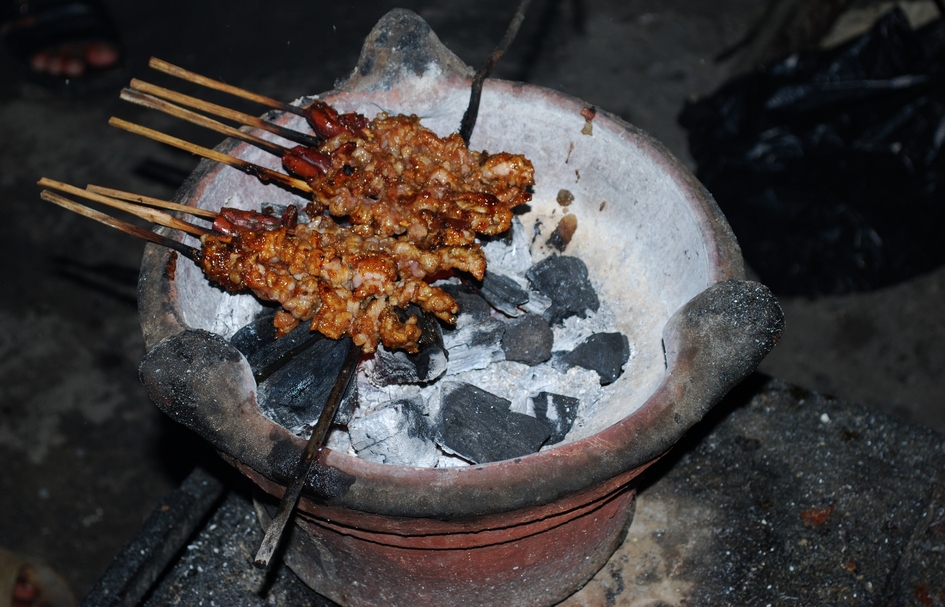 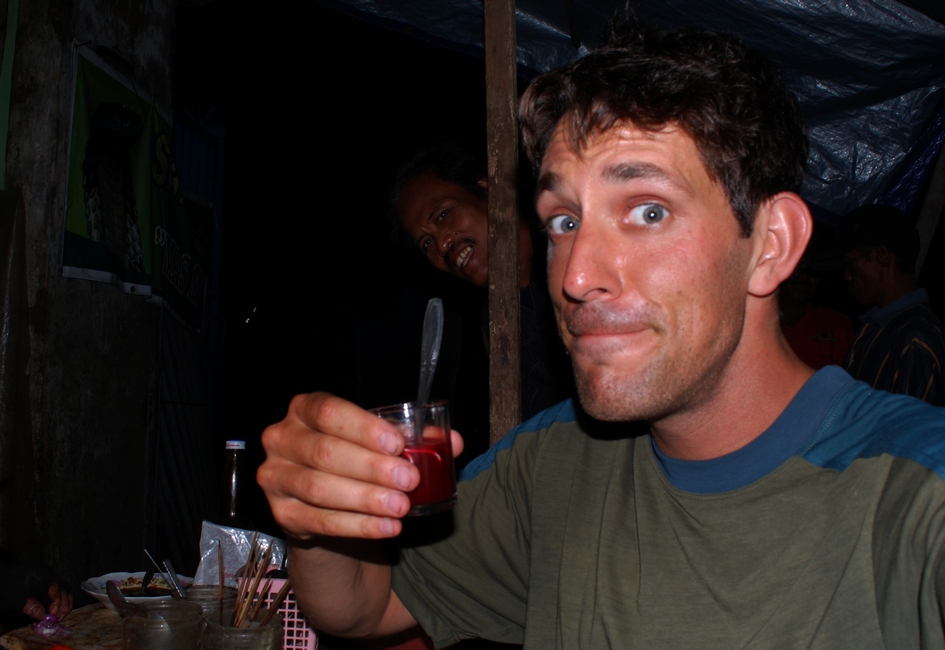 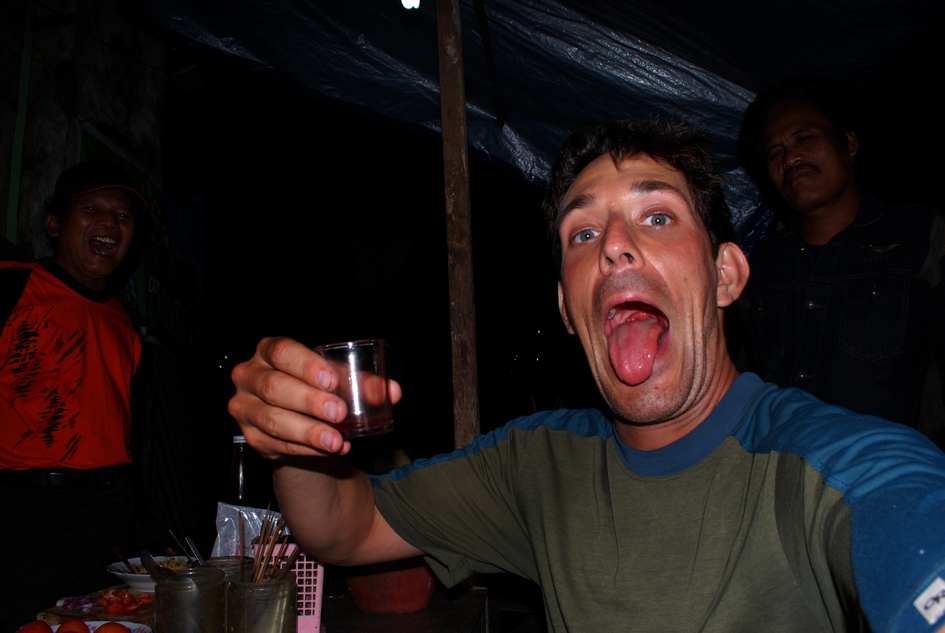 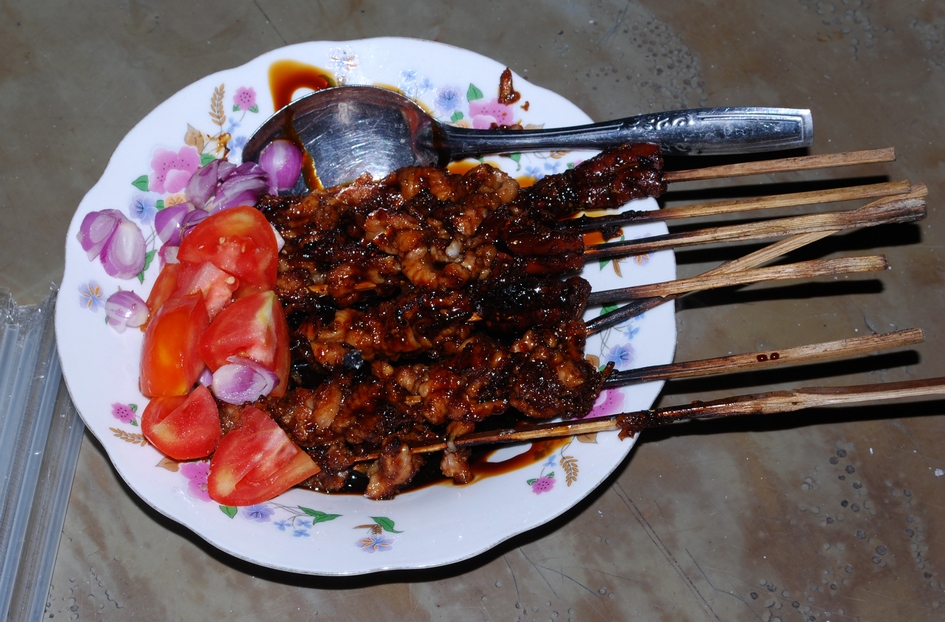 I quashed the rebellion and moved on to the satay. Grilled and marinated in soy sauce the cobra teriyaki was quite good although I was not especially hungry at that point. As a precaution I’d eaten Italian before hand in order to quell my hunger. I needed food and I was afraid drinking blood and eating cobra might stifle my appetite. Imagine that? I suppose loading my stomach prior to grossing myself out could have backfired....big time. I thanked the chef and moved on, wondering if my stomach was going to continue cooperating. It did.

I'm still waiting for the erection.
Posted by Rich at 10:50 AM