If there is a highway in hell I know where Satan found his inspiration. That would be the road from Bogor to Jakarta in West Java. Two words: holy shitnuggets. You have not lived until you’ve driven a motorcycle down this gem. Of course, if you do then you might not be around to share. The Bogor region is a highland escape from the oppressive heat of Jakarta for much of the local populace. As a result weekend traffic is ludicrous.

I read about this and made it a point to avoid venturing there on the weekend. This can be problematic when you have no idea what day of the week it is. So guess where I found myself on a Saturday afternoon? Idiot.

Traffic is so thick the authorities are forced to stop vehicles going in one direction for a period of time and let vehicles from the other direction proceed. This turns some parts of the road into two lanes of one way traffic and other sections into half-gridlock half-free flowing traffic. Having a motorcycle allows one to avoid gridlock but not without skirting the boundary of prudence and foolhardiness. 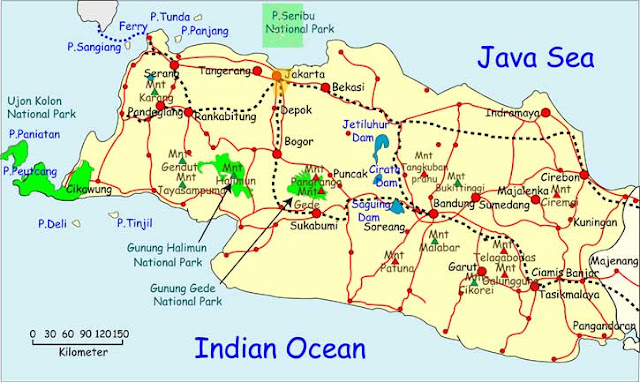 Basically, I drove for miles on the wrong side of the road with traffic coming at me more or less head on. This compels one to drive in the middle of the road with moving cars coming at you on one side and parked cars waiting their turn to move on the other. Thread the needle. One little slip-up and someone has a free skinny American hood ornament. And then you have other motorbikes also coming from the opposite direction trying to occupy the same space in which you find yourself encroaching upon. Adopting a causal sense of self-preservation and a bit of tunnel vision is essential.

You would think that it would be easy to get to Jakarta. It is the capital city. Where the hell can millions of people hide? Kind of hard to miss right? Maybe. There are signs that point the way to Jakarta but they all steer you towards a toll road. I would be more than happy to pay the toll but motorcycles are prohibited. So I drove through Bogor twice in silly traffic attempting to find the poor man’s route to Jakarta. Every time I stopped to ask directions the person would, without fail, point me towards the toll road. It was not until I started pointing to the motorbike and saying ‘Tidak (no) toll’ did I finally receive proper directions. I only wasted two hours of my life. I want it back.

The traffic situation from Bogor to Jakarta borders on insanity. It is only a few notches below everybody wearing blindfolds and driving backwards. There is only one rule: do whatever is necessary to reach your destination. If you are bigger, bully your way through. If you are smaller than fill every conceivable niche of negative space. Pass on the right. Pass on the left. Drive on the shoulder. Drive on the sidewalk. Cars, buses, trucks, motorcycles, bicycles, pedestrians. Stopping, starting, swerving, flashing lights, honking horns, playing peek-a-boo, and doing all sorts of other shit that can be hard to believe until you experience it first hand. I understand the need for people to cross the street and for other vehicles to pull out in front of me and cut me off but at least show a little hustle.

People look at you, assume you’ve picked them up on radar and then continue on at a leisurely pace not unlike the one set while strolling through the park on a Sunday afternoon. Many others do not even bother to look. Their faith in the ability of approaching drivers to see them and slow down rivals that of the most loyal adherents to any religion. I find this phenomenon everywhere in Indonesia. Generally speaking, people refuse even a cursory glance when turning onto or crossing a busy road. The duty is incumbent upon oncoming traffic to perceive everything in front and react accordingly. If this phenomenon had a voice it would say, “I’m crossing the road now and if you don’t like it then go F yourself. Hit me. I dare you. Hit me pussy! Hit me!!!!”

You have to attempt to drive in a relatively straight line because you never know what the hell is approaching you from the rear. I had so many motorbikes up my ass I’d be a millionaire if I charged a toll. For awhile it was actually kind of fun, sort of like a video game. But the novelty wears off after about three hours. Constantly concentrating on not dying can be mentally taxing. How these people do not constantly explode into uncontrollable fits of road rage is a real testament to their gentle dispositions. You’d think it would drive people nutso, like ‘naked in the bell tower with a high-powered rifle’ crazy but such is not the case. Nobody seems to care, which I find both remarkable and reassuring. I think if this were the US there would be open gun battles on the highways.

I actually came upon an accident. As I passed a bus (on the shoulder of course) there were two motorbikes lying on the road. I stopped to see if anyone was hurt and discovered that there appeared to be no serious injuries. I would have stuck around longer but folks might have assumed that I was involved and you never know where that might lead so I decided to move along. I used the word ‘actually’ because I have only come upon one other minor motorbike accident during my four months here. I find that astonishing, especially after subjecting myself to the local traffic conditions. You would expect there to be pieces of metal and body parts strewn across the roads at regular intervals but it is not so (thankfully). I know accidents happen (I frequently come upon stretches of road covered in glass) but for the most part they’ve seemed to master the art of organized chaos. Or, more likely, I’ve been fortunate enough to miss the carnage. Hopefully, it stays that way.

There are three things you can do in lieu of using your brakes: flash your lights, honk your horn, or accelerate. I am particularly fond of the last one. Folks here use their signal lights so frequently that it is basically meaningless to me. They might as well drive around with their hazards on. And the same is true for the horn. People honk so much for so many different reasons that I barely hear the sound anymore. I have absolutely no idea what the f*** they are honking at about 98% of the time. Do they like my bike? Do they like my ass? Am I in the way? Are they about to pass? Is there something wrong with my bike? Am I just so f***ing cool they feel compelled to honk at me as a sort of tribute? When I am certain it has nothing to do with me I am still confused. It is fun to play ‘What the hell are they honking at?’ as I drive down the road (when I am not focusing on preserving my existence that is). And the same goes for flashing the head lights. No clue. None. I’m not sure they know why they do it. I keep meaning to ask my friends to let me in on the secret but I always forget. I must get to the bottom of this mystery.

I do, from time to time, spit out a few words of Indonesian in order to ask a pertinent question or two: What road is this? Is this the road to such and such a place? How long does it take to get there? As a result of my incredibly poor accent, their surprise at a goofball speaking Indonesian, or both I often receive dazed looks of befuddlement, as if I’d asked them if gluing my genitalia to their forehead would be permissible. I find myself repeating the same, and I would think fairly obvious (even considering my abysmal accent), word over and over again. Jalan ke Jakarta? Ja-kar-ta. JA-kar-ta. Ja-KAR-ta. Ja-kar-TA.

Today, one guy never even flinched. For a minute I thought he might be made out of wax. As it turned out I was technically in Jakarta at the time but I think you could at least utter ‘Jakarta ini!’ or alternatively ‘go to hell you stupid ass white mutant of a man and take your piece of shit bike with you!’ Is that so much to ask? It also not uncommon to enter an establishment, say a restaurant for example, and be greeted with a ‘deer in the headlights, what the f*** do I do now?’ look. When they sometimes retreat into the kitchen to enlist reinforcements I like to imagine them ringing a bell and screaming “Code blue! Code blue! This is not a drill. I repeat, THIS IS NOT A DRILL!!!!!!!”

So I made it to my hotel. I spent the better part of ten hours on my motorcycle. Between the possible tissue damage to my ass, the onset of black lung, and the four hour adrenaline rush I’d say it was an interesting day. Can’t wait to cruise around the city. Jakarta rocks.