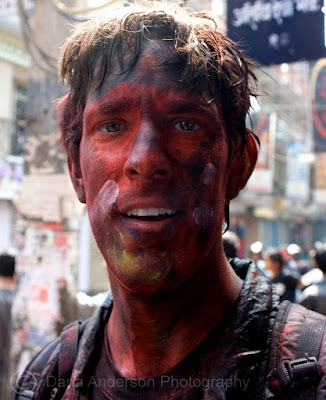 March 20th, 2010 - Before I chronicle my Himalayan frolic I should probably address an event that occurred just before I headed to the Khumbu Region of Nepal. On the last full moon day of the lunar month at the end of the winter season the spring festival of Holi is celebrated in Nepal and in many other countries around the world. It is mainly a Hindu and Sikh celebration held in anticipation of the coming monsoon rain and is also known, appropriately, as the Festival of Colors. Water is involved. A lot of water. There is also an abundance of colored powder, particularly red. Think of it as a large water fight in Technicolor. On the streets of Thamel on March 1st it was pretty much bedlam.

I had come to learn of this festival only the day before. Some folks like to start early, as I realized when a bag of water nearly hit me in the noggin, thrown from one of the balconies above. Initially, I was not amused but my irritation soon turned to curiosity, intrigue, and finally resignation. As a tourist (i.e. a high value target) you have two options: 1) stay in your hotel all day; or 2) take up arms and prepare yourself for battle. I could barely hear myself think over the war drums banging incessantly in my head. They wanted a war. I decided I would give it to them.

Clearly, I was going to have to arm myself. After some initial inquires I made my way around and found what I was looking for. My arsenal included two water pistols (one large, one small), about 80 small clear plastic bags (water bombs) manufactured specifically for this day, a packet of red powder, a dry bag (to hold a shit ton of water for supply purposes) and a thirst for vengeance. I was not going to be a victim.

I admit it. I regressed. My maturity level plummeted about 30 years in the span of hours. The night before Holi I put on my rain gear, filled my backpack with assorted weaponry, and went out to pick a fight. My desire for mayhem was unrequited. The folks who earlier thought it prudent to begin the festivities prematurely had vanished. I was forced to wait until the next morning to satisfy my bloodlust. That night in my hotel room I spent a good hour and a half filling up 30 to 40 small bags of water that would serve as my ammo dump. I figured these, along with my water pistols and red powder, would suffice to keep me in the game for at least a spell. My sleep that night was fitful and choppy. As any soldier will tell you it is almost impossible to sleep the night before a battle. That night was no exception.

I awoke the next morning, donned my battle dress (i.e. rain gear), and began my patrol of the streets of Thamel, Kathmandu. Shops were closed and I saw few vehicles but the tension was palpable. From my hotel room I could see folks on rooftops gearing up for Armageddon. I made my way towards the center and narrowly missed a few 'gifts from the heavens'. As I approached a group of younger Nepalis at a corner they barely noticed me….that is until I unleashed a barrage of water bombs into their mist, scoring a few direct hits. The fact that Johnny Tourist just ambushed them left them confused…..for a moment.

When the moment passed Richie received a taste of his own medicine. One of the miscreants even got close enough to smash a bag of water on my head. Can't stand the heat? Get out of the kitchen. I fled…but only momentarily. I had to cross their path to continue my patrol to the center of Thamel. So I dipped into my bag for more ammo, took a deep breath, and hit the throttle. I think I screamed, "Chaaaaaarge!!!!"

As I discharged my payload they ducked inside the doorway for cover. More soldiers soon emerged with an unmistakable look of vengeance in their eyes. I manage to avoid the worst of the onslaught as I sped past. I had another surprise for them. As they were rearming I removed my water gun from beneath my jacket and ran to the doorway. They did not see it coming. Richie: 2, Random Nepali Miscreants: 1. After the execution of my guerrilla tactics I fled the scene, running so hard I nearly vomited. The last time I felt that I was 15 years of age and had just thrown half a dozen eggs at a rival 'gang' on Halloween. Glad to see I've matured.

I moved on. The rest of the morning took on a similar theme. I was in constant fear of being hit from above by those cowards firing from the safety of balconies and rooftops. They were untouchable as it was impossible in many cases to gain access to their position. Pricks. 'Come down here and fight like a man (or woman as the case may have been)!' was my constant cry. Pussies. In addition to the rampant aquatic warfare there were also roving bands of Nepal's youth wandering the streets screaming, 'Happy Holi!!!!' and smearing wet colored powder on the faces of anyone in their path.

I was in their path and by the end of the day I had enough color in my hair and on my face to supply Crayola for a year. The smearing of color was not always done with the gentleness one would hope for. In fact some reveled in smashing powder on your face, in your ears, and, unfortunately in your eyes. It stung….a lot.

One nefarious little shit found great amusement in packing powder in my eye like he was trying to plug a hole in the dyke. As my vision cleared so did my head. Mess with the bull you get the horns you little bastard. Remember that dry bag? Dry bags are great for keeping your gear dry in wet situations (rafting trips, trekking through the rain forest, etc.). They are also great for holding water. I managed to fill mine with about two gallons, which I was saving to rearm but, hey, special circumstances call for special measures, right? I spied that little pooperface standing next to his friends nearby. I opened the bag, sneaked up behind him, and let loose my deluge. Gotcha! After my ambush I did the only thing I could think of…….an Irish jig. It was a real crowd pleaser.

As I did this onlookers (i.e. local Nepalis) could not get enough. They found my antics hysterical. I think they were a little surprised that a tall lanky freak of nature with face paint could get so into their local tradition. I am pretty sure I made the local news as more than one Nepali reporter focused either their video camera or photo camera in my direction. How old am I?

This was how I spent my morning and early afternoon. The day was not without its unsavory aspects. Females who decided to get in on the action often found hand prints on the area of their shirts covering their breasts. A distinct hand print on the ass was also not uncommon. And remember the hooligans I mentioned above? As I made my way back to the hotel I was forced to watch in horror as those same scallywags were taking things to a whole other level.

Apparently, having run out of water (or being cut off) from the tap they were scooping water out of the gutter. Imagine what that water must have looked like. There were filling buckets and plastic bags with liquid disease. And they were merciless. If you were ignorant enough to drive your motorcycle or bicycle through his area you were met with a cascade of shitwater.

I've seen some pretty foul things in my time but this stopped me in my tracks. I just sat there for a good twenty minutes or so as pedestrian after pedestrian (locals and tourists alike) were inundated with some of the nasty brew imaginable. I maintained a safe distance and made utterances like, "Ooooo, that sucks!", "How's that taste?', "Goood lord!", "Poor Bastard!", or "Hepatitis is yummy!".

And, as is always the case, things got out of hand. Not everyone saw the fun in being soaked in pooh-pooh water. One gentleman objected fiercely and was summarily beaten for his insolence. I watched, in shock, as this guy wallowed around on all fours in a puddle of sewage while members of the Water Assault Squad began kicking his ass…literally. A bucket to the head, foot to the back, fist to the face and a few more blows ensued. Luckily for him the police showed up quickly and put an end to the offensive. I was thankful for that. In addition to preventing further bodily harm it also provided an open lane to my hotel. Super. 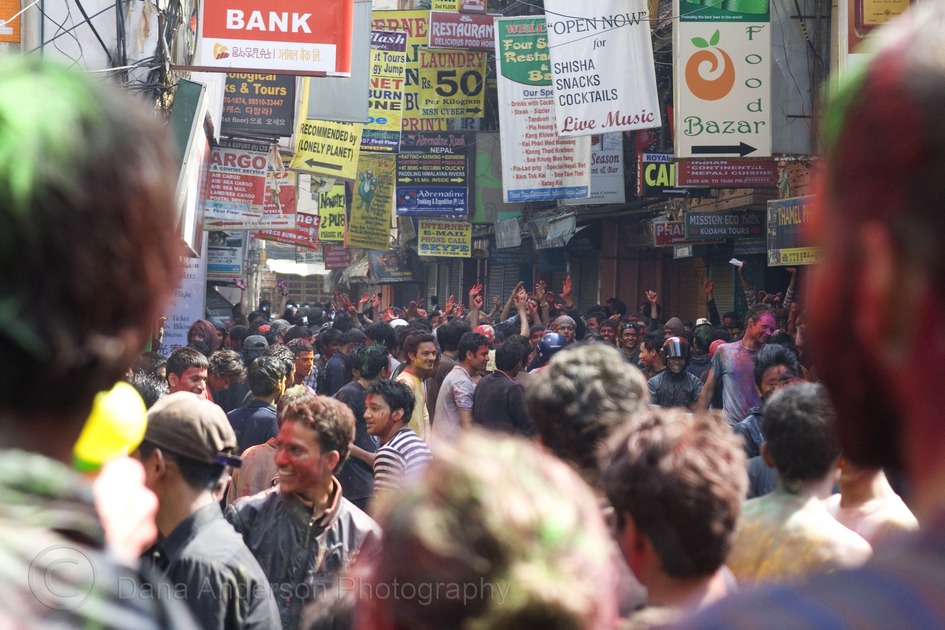 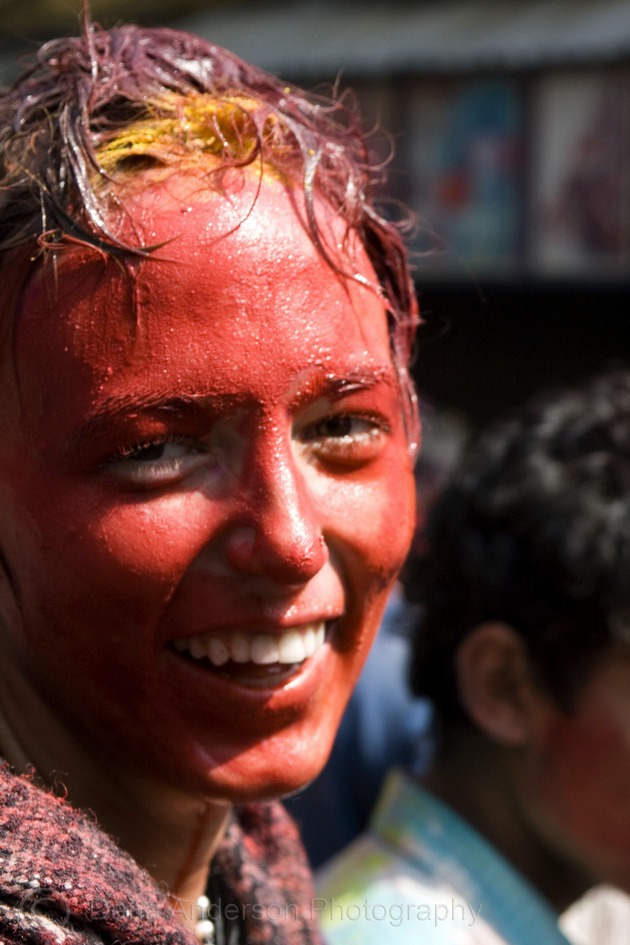 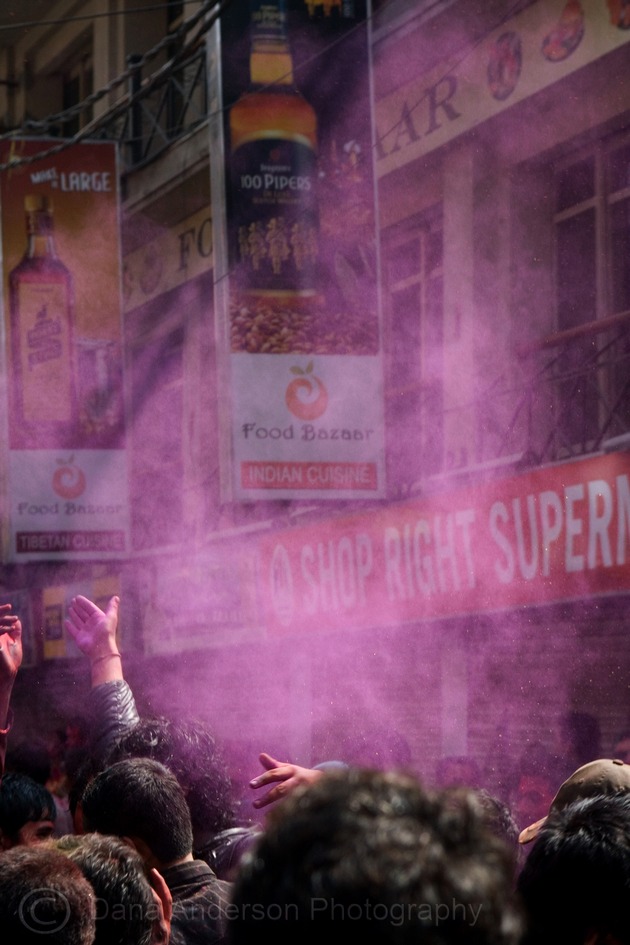 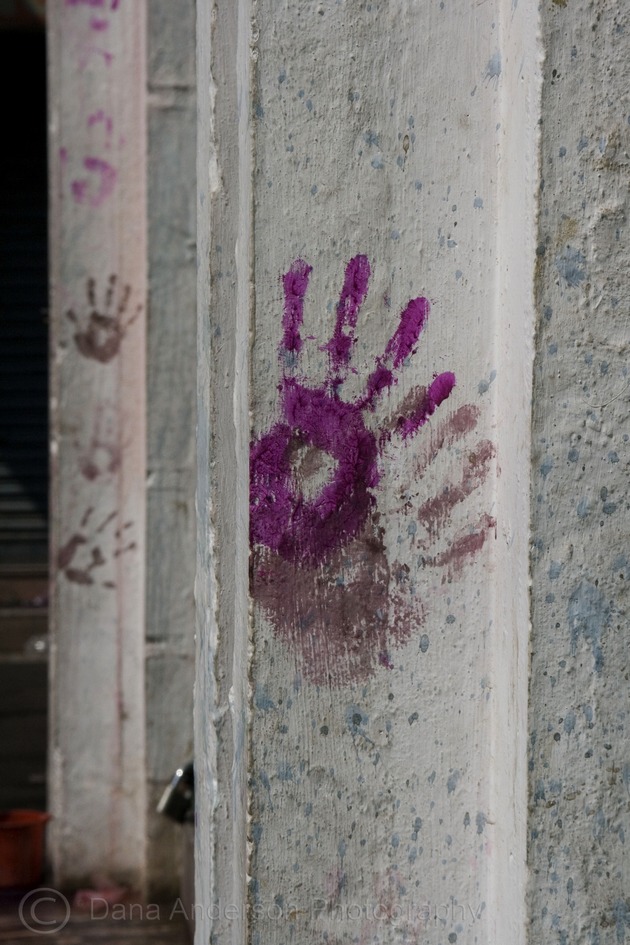 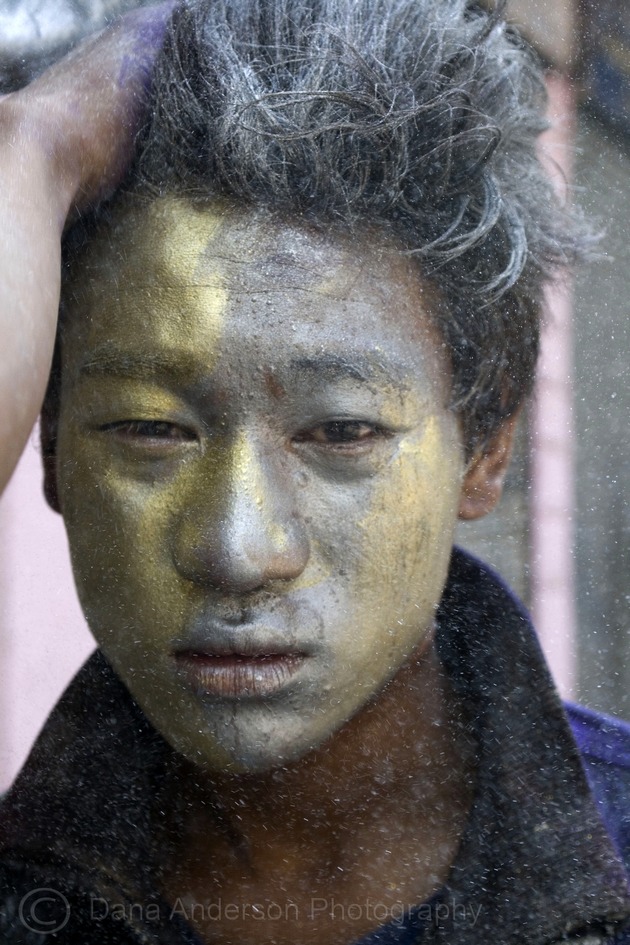 'Blessed is he who has learned to laugh at himself, for he shall never cease to be entertained.'