Feb 28th, 2010 - I decided to take a day around Sauraha before heading into the jungle of Chitwan National Park. Chandu, the owner of my lodge, suggested I go into what is known as the Buffer Zone Community Forest part of which lies just across the river from the park on the outskirts of Sauraha and is administered by the local community. Inside can be found all of the animals that lay within the park itself to include el Tigre.

As I was making arrangements with him for the three days inside the jungle he offered the services of his guide, Denis, free of charge for an afternoon to visit the forest. It is possible and pleasant to ride bikes inside the forest so this was the agreed upon mode of transportation. It would only require a half day so we went in the afternoon as this was a potentially good time to see animals.

Having already paid Chandu I was mildly unsettled when I discovered that he was a bit drunk (in a sloppy way) at noon. As Denis and I departed on our mini adventure I inquired as to Chandu's state. Denis told me he was just celebrating something or other, implying that this was not his natural condition. This turned out to be true in some respects. However, his 'natural' status depends heavily on how much money Chandu has in his pocket at any one time. Today he was hammered. Yesterday, I paid him for my trip. Coincidence? 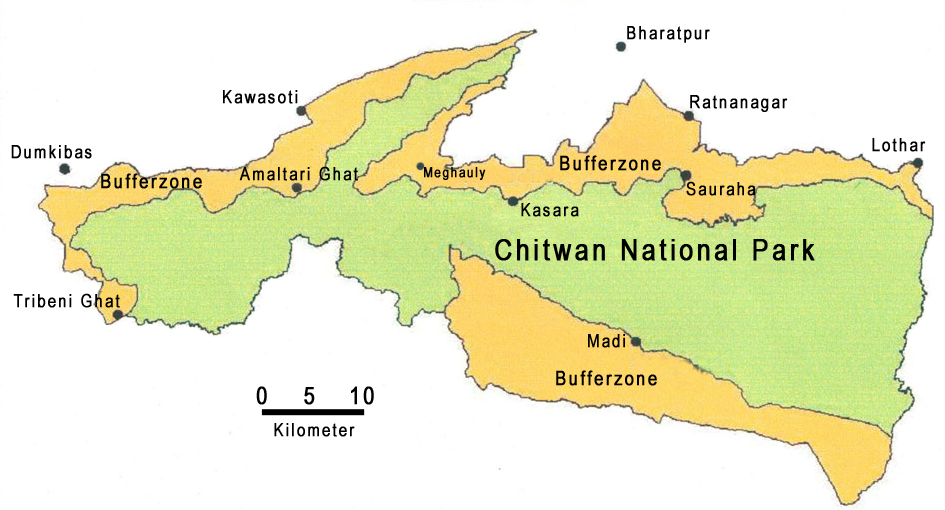 The forest was a pleasant place and biking along the jeep trails that lay within is a perfect way to experience it. We stopped at one of the small lakes (number 12, 567 I believe) and watched local fisherman gather up their catch by dragging a large net along the lake bottom. Locals were waiting nearby to purchase the fresh fish. 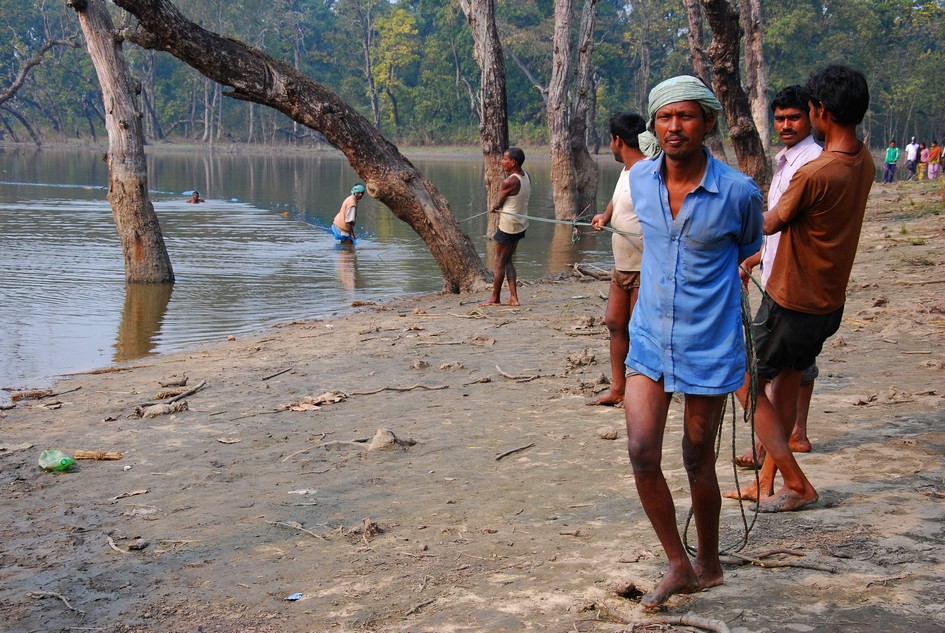 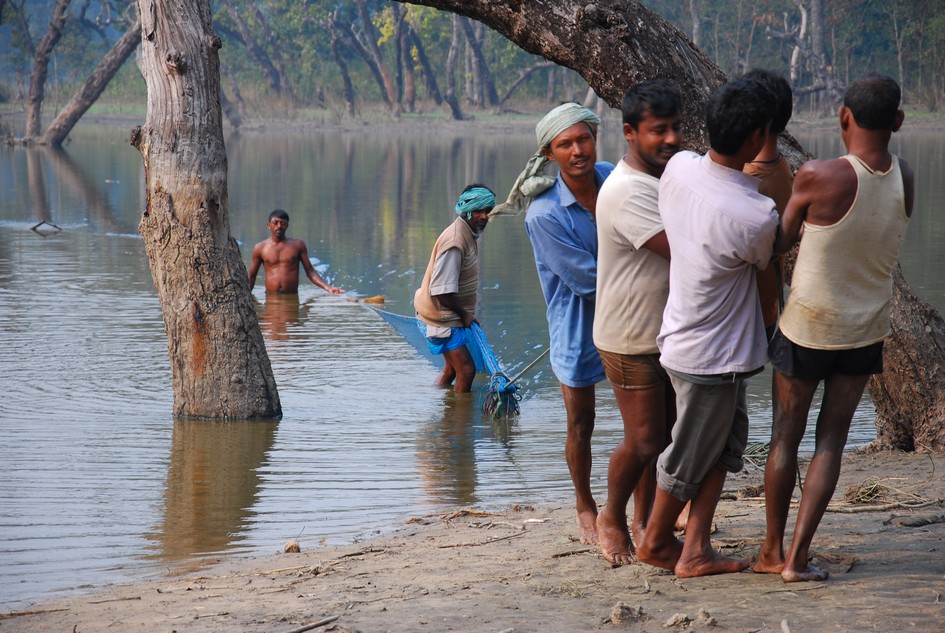 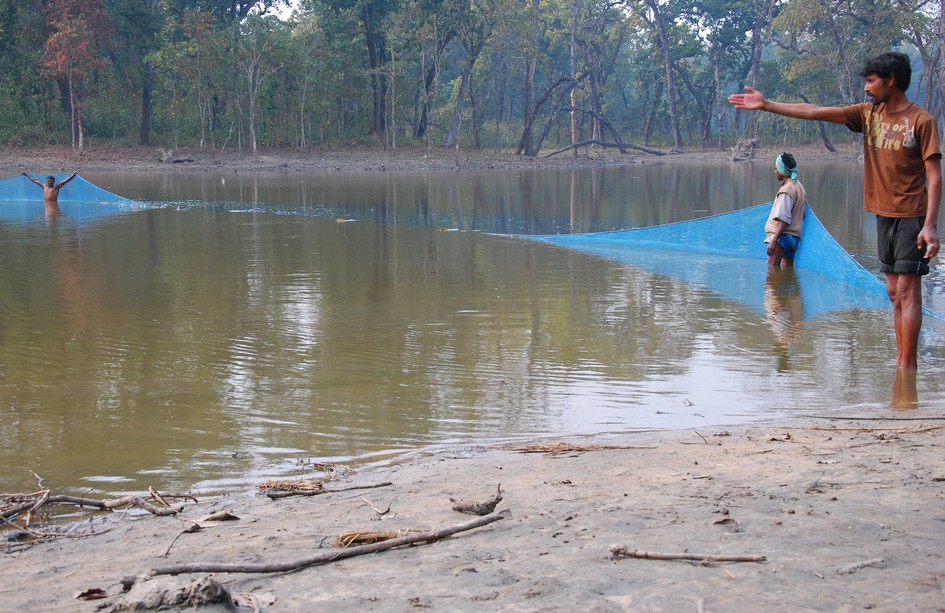 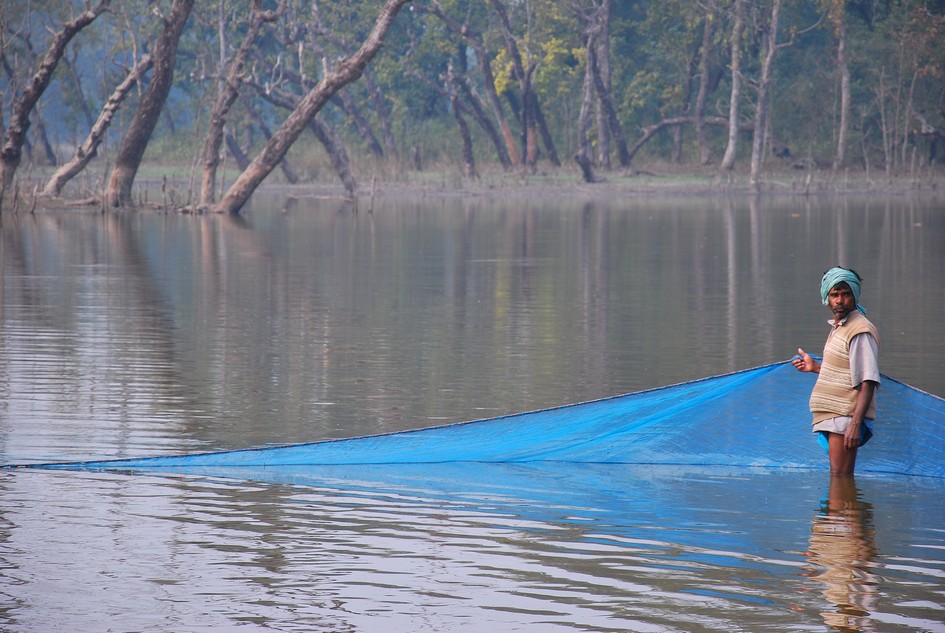 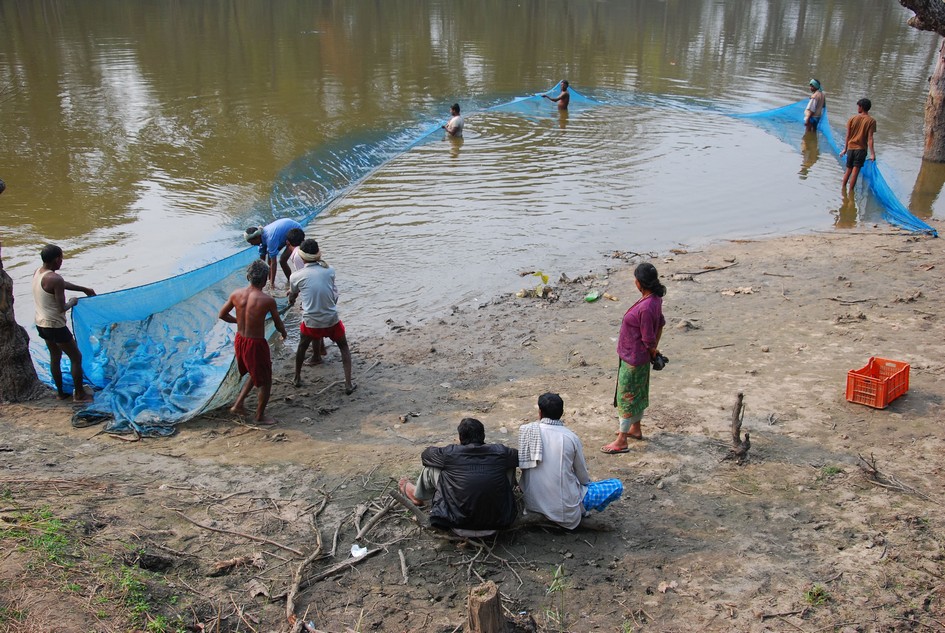 Next we moved to another of the larger lakes (9,467?) where we spotted some mugger crocodiles sunning themselves along the shore. The interesting thing about these crocs is their tendency to cover large distances overland to find suitable habit or prey. They eat just about anything that comes to drink water and, it is said, are not above attacking Johnny Villager.


Most of the usual haunts were rhino free but after arriving at a forest viewing tower overlooking a small lake (3,112?) we spotted one of the horned behemoths wading in the water and munching on hyacinth. The combination of forest setting, relative solitude, and low light made for a sublime experience.

We also came across many deer, some of them of the 'barking' variety. I made an attempt at communication (i.e. barking like a dog) but my advances were rebuffed. Grumpy bastards. We also discovered a pile of tiger poop identifiable by the large volume of hair contained within (they can't digest it). Poop but no tiger. Such is my lot. I think I heard the shit mocking me. 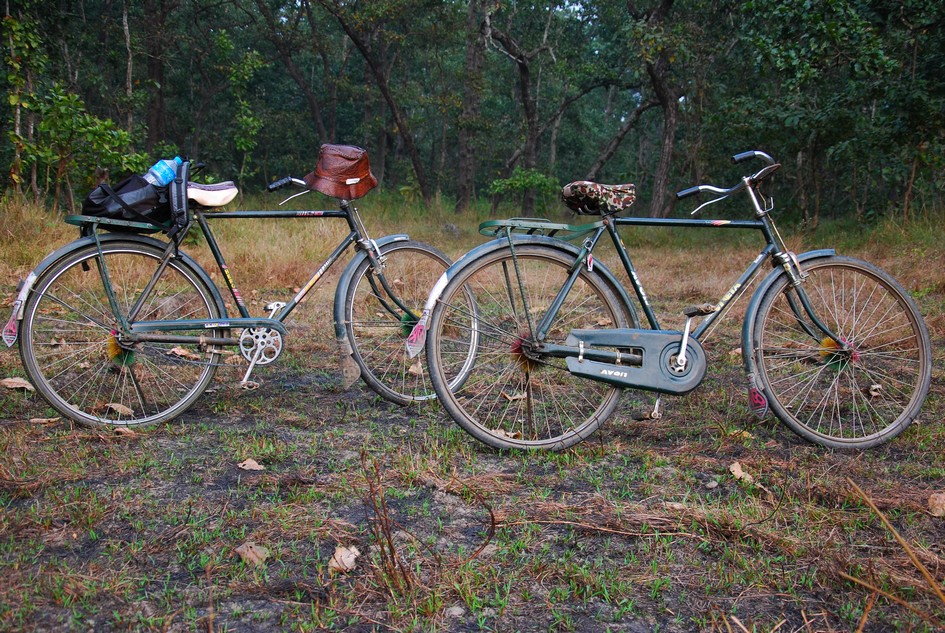 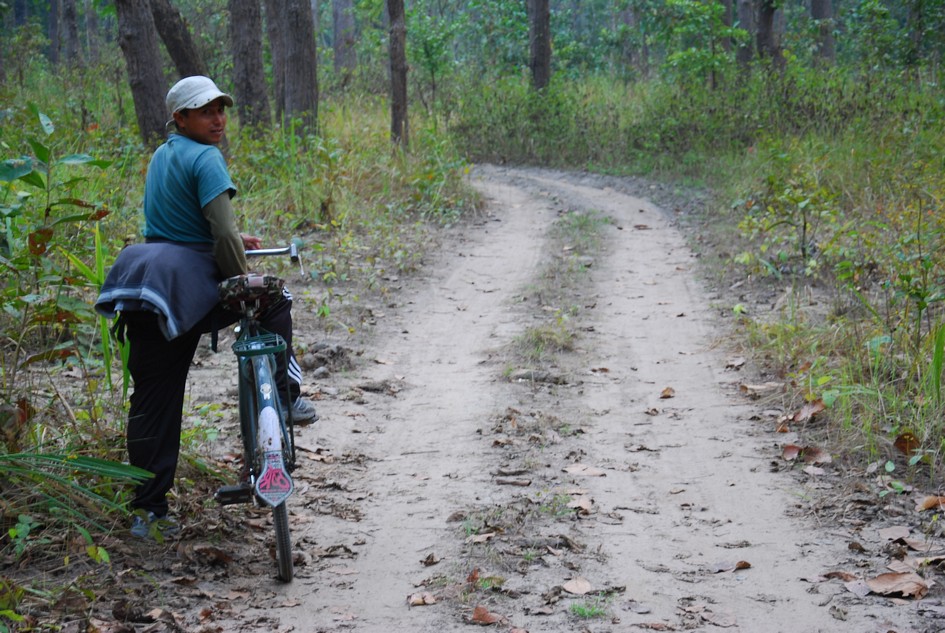 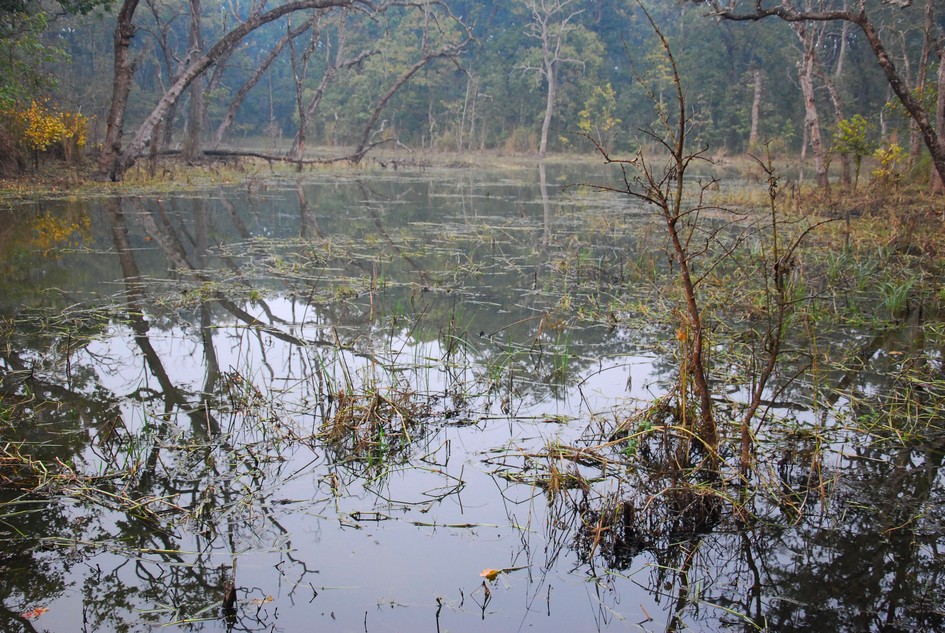 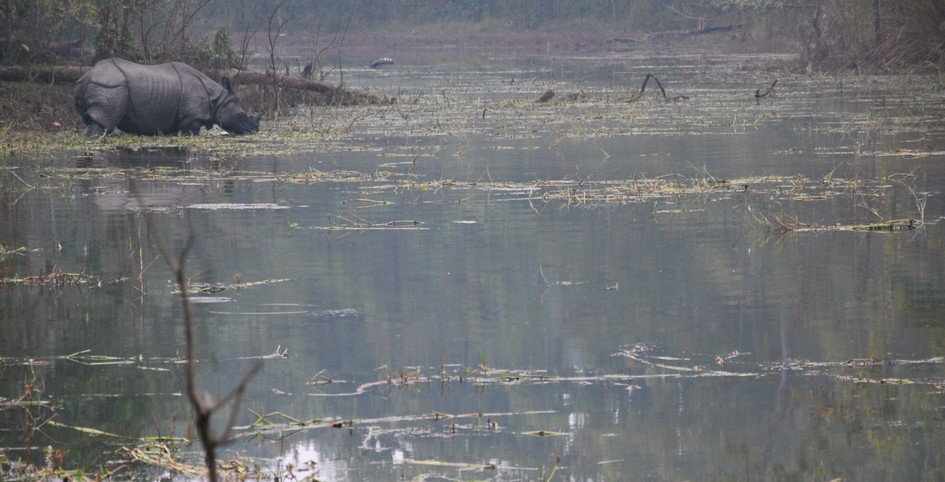 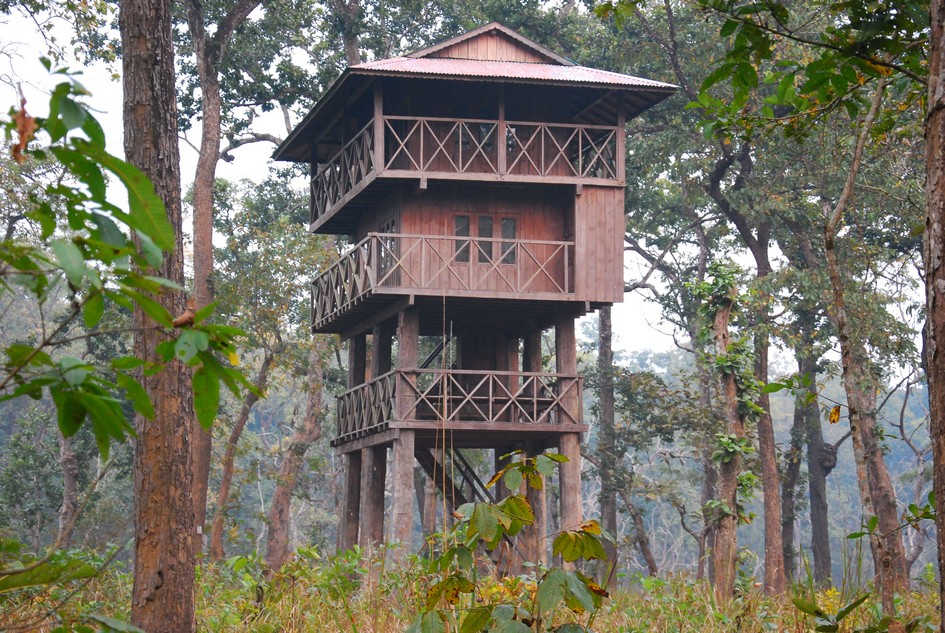 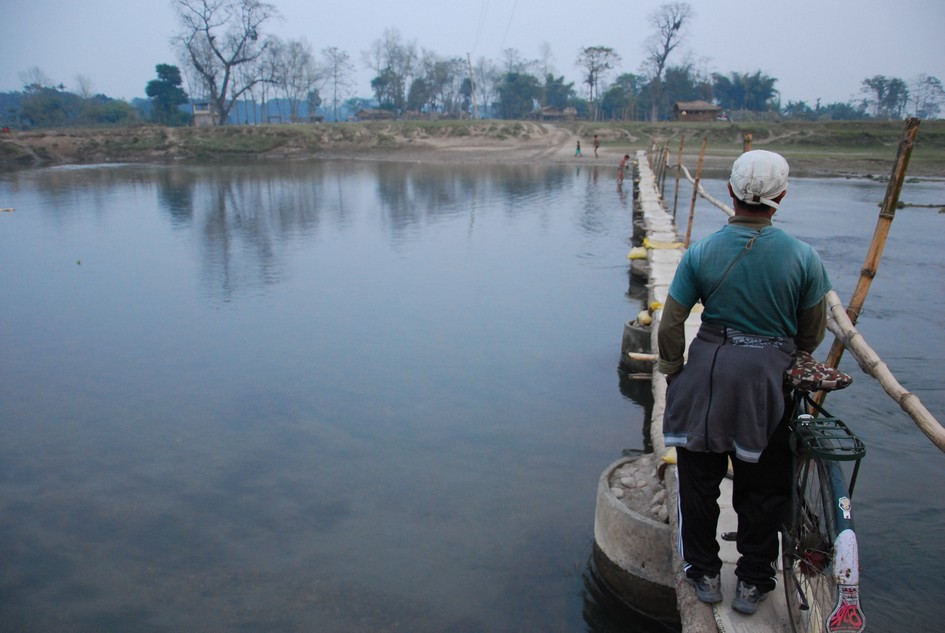 We made our way back towards Sauraha and it was at this point the intrigue began. My little side trip was supposed to be free of charge but Denis asked for a tip and that I please not tell Chandu. 'He be very mad with me', as he put it. The truth is I had every intention of tipping the lad as I thoroughly enjoyed myself. The amount he requested was on par with my intended donation. This, in and of itself was no big thing, but it did begin to raise alarm bells about what I was getting into. Let's call it foreshadowing, shall we?

Remember Raju (the friend of a friend I met in Sauraha not the pirate group in Bangladesh)? Raju met me at my hotel after my trip. I asked if he wanted to tag along to the restaurant I would be dining at (this is also the restaurant where Denis works). As Raju seemed intent on shadowing me anyway (after all, I am pretty friggin cool) there was little choice. I was a little uncomfortable about having him come with me as I thought he might think the check would be on me. Can you say 'nail on the head'?

Now, truthfully, picking up dinner would not have been completely offensive to my sensibilities but ordering a small bottle of whiskey and an accompanying meal was a bit over the top. At the time I was under the impression that he was paying his own way. My friend in Kathmandu assured me he had his own source of income and did not need to leech off of tourists. I even went so far as to have a drink with him (straight whiskey with a touch of water) in order to be polite. Had I known I was drinking my own whiskey I would have indulged a bit more. What I later discovered (the next day) was that when separate bills were presented to my rapscallion of a pal he told the waiter to combine the checks.

When I realized that I was expected to pay I was less than amused. And Raju knew it. This is where the pirate analogy really became apparent and was underscored in no small measure by the scar Raju had on his face from a previous motorcycle accident thereby giving him the requisite aura of menace. Prick.

Now the truth is I should have told Sinbad to go F himself and pay his own bill but in the end I relented. It is sometimes difficult to know the parameters of the situation one finds oneself in. I knew very little about El Raju so I decided to suck it up just to be on the safe side. Perhaps, I am just a pussy. Either way it still burns my ass a bit.