Nov 2nd, 2009 – Yesterday, I went for another stroll, this time to the Buddhist temple of Swayambhunath atop a hill west of Kathmandu. This particular temple is better known as ‘Monkey Temple’ in honor of the rambunctious primates that inhabit the temple complex. My fascination with urban primates is on the decline as most of the ones subjected to city life inevitably turn into assholes. I’ve also discovered that monkeys can carry a form of herpes which can be transmitted through saliva. Herpes from a monkey? There is just nothing good about that.

My stroll actually began as a rickshaw ride, or should I say drive? Yep, I convinced the operator to let me take the reins. It was not pretty. Had it been designed for a Nepali mutant (i.e. an individual over six feet) I am sure it would have been delightful. As it was my knees were either at my elbows or in my armpits. It also had a bit of a pulling problem as I quickly discovered. One rotation sent me into the curb. As I failed to fully appreciate the width of the passenger area I came close to knocking over a parked motorcycle. I wonder what the Nepali word for ‘douchebag’ is?


I soldiered on but found braking to be a problem also and that, combined with the steering issue, made my maiden voyage a real trial. The owner was leery of my skills so he constantly had his hand on the left handle bar and the back brake. Probably a good thing. People stared. Horns honked. My heart pounded. I have a new found respect for rickshaw drivers, not that I was unsympathetic before but now I really get it.

After a few adrenaline pumped minutes and a few close calls I relented and abdicated my throne thereby taking my rightful place in the rear…..for about twenty seconds. We reached a small incline right before a bridge and the struggle began. He gave it is all but I could not bear to watch. I dismounted, paid the fare and walked the rest of the way.

It was not so far and if not for the opportunity to drive I would have just walked in the first place. I found myself standing on the bridge overlooking the Bishnumati River. Words I would use to describe what I saw: putrid, rancid, noxious, putrescent. Great place for a vomit festival (Vomitalooza?). I was presented with a river of pure sewage decorated with piles and piles of garbage. There were also more than a few pigs rooting through the water looking for a savory meal accompanied by crows upon their backs. It was absolutely disgusting.

I went down to the water’s edge for a closer look. It was not easy and I had to try to keep the focus off the smell. Rotten food, trash, shit, pigs, dogs, crows, and cows were among the local inhabitants and since it runs through Kathmandu there were also houses along the bank. I’m sure the pigs weren’t feral. Imagine enjoying a nice succulent pork chop from one of those prize oinkers. Yuuummmy!!! 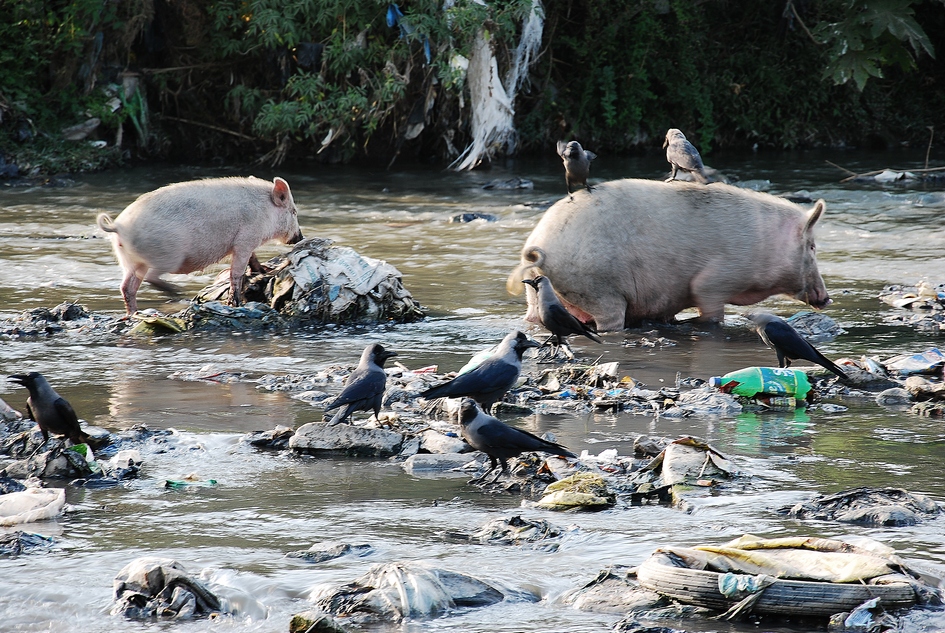 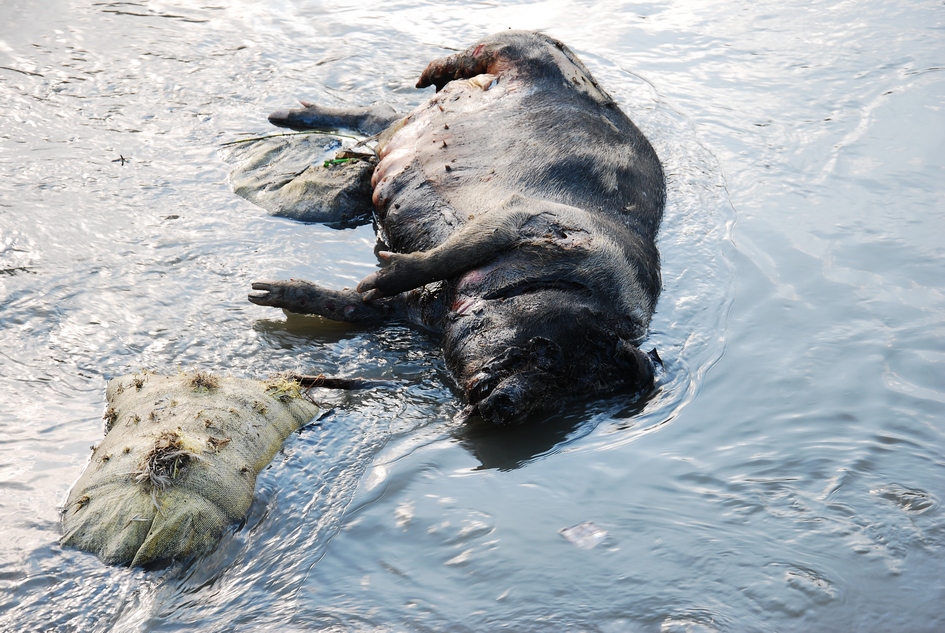 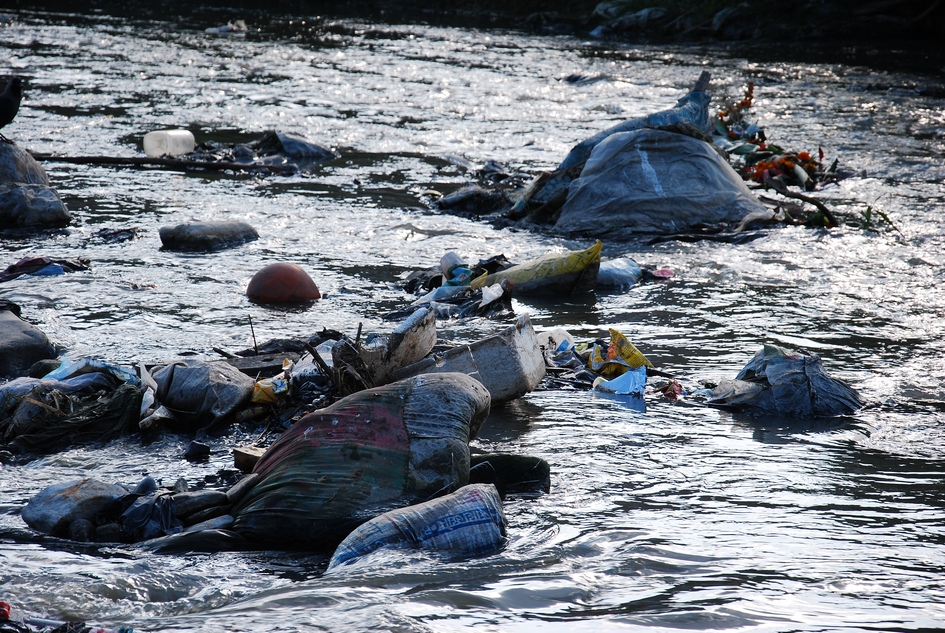 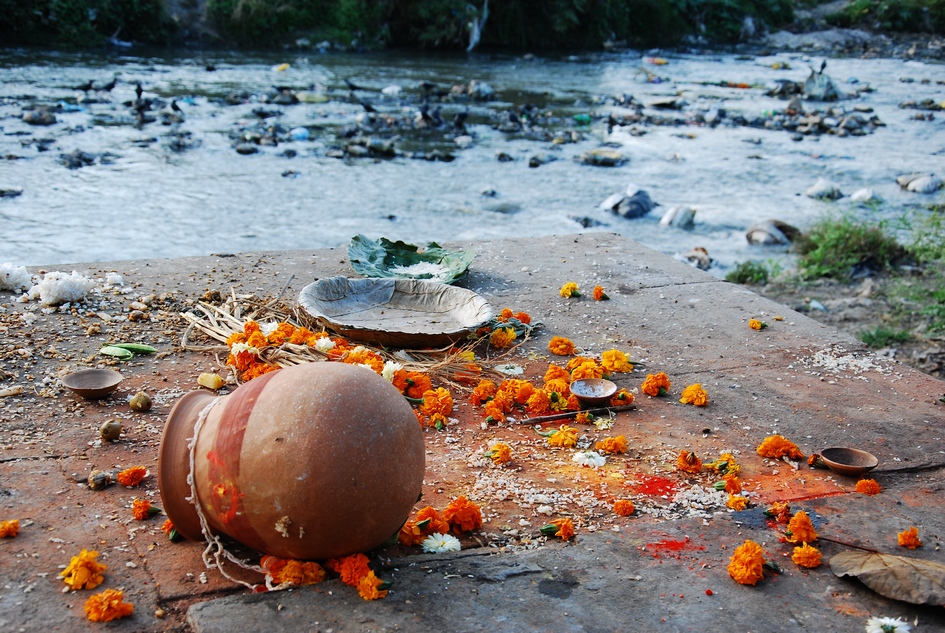 I left hoping I was not looking into the future of humanity in light of overpopulation. Cheery thought, no? So I continued up the hill and made my way up the staircase leading to Swayambhunath. This is one the most important sites for followers of Tibetan Buddhism in Nepal and is an impressive complex. Unfortunately, there are more tourists than monkeys and enough trinkets on sale to fill a Super Walmart. On top of that the upper portion of the stupa is being repaired so ideal photos are impossible. Any spiritual feeling is pretty much obliterated by the hordes. None the less there are nice views of the Kathmandu valley and the architecture is interesting enough. 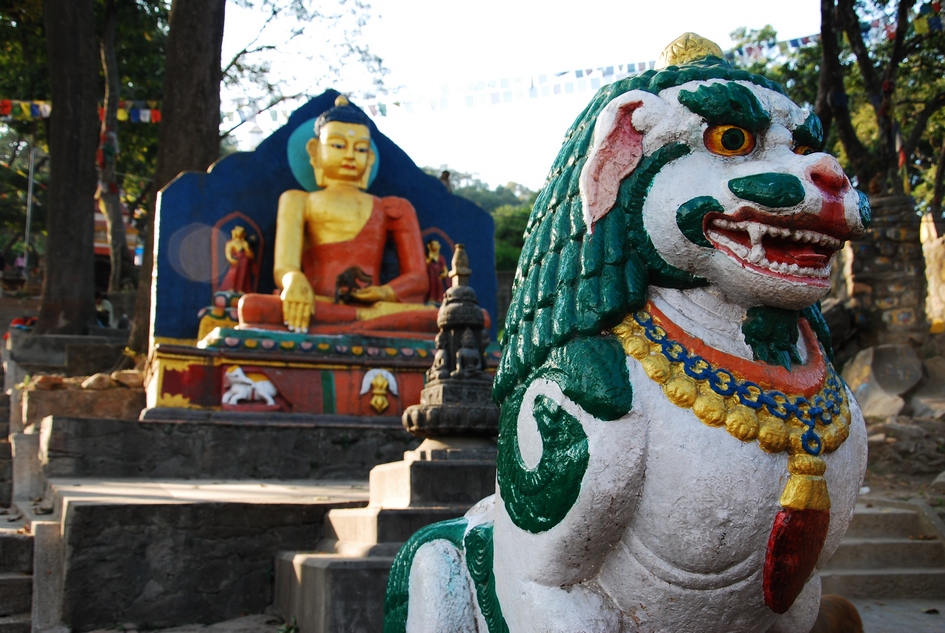 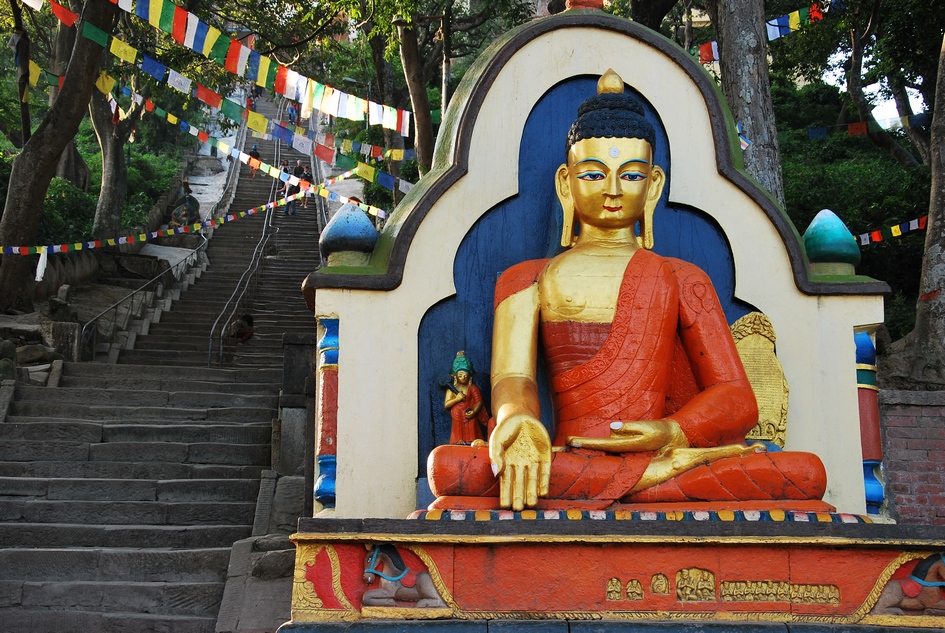 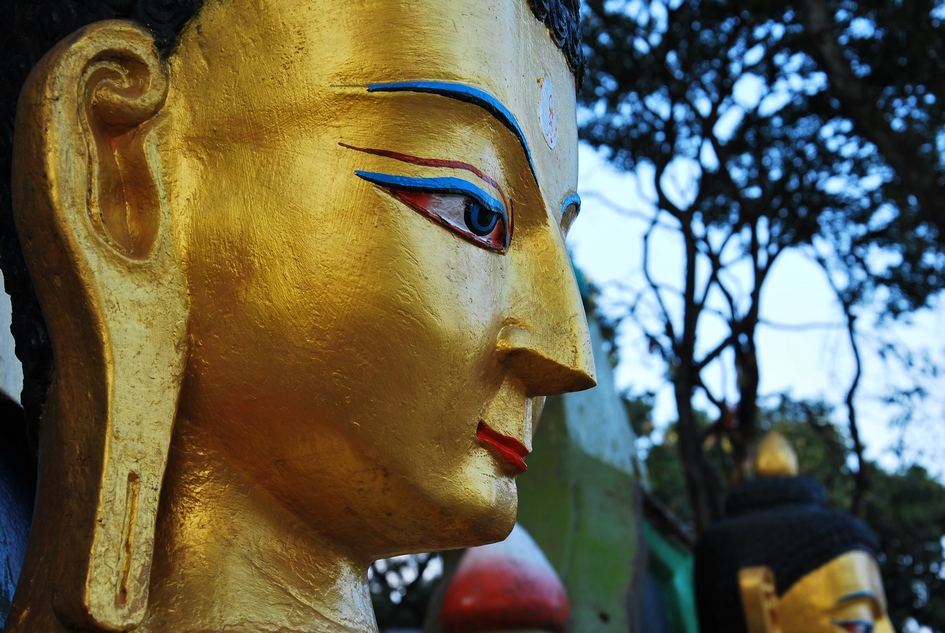 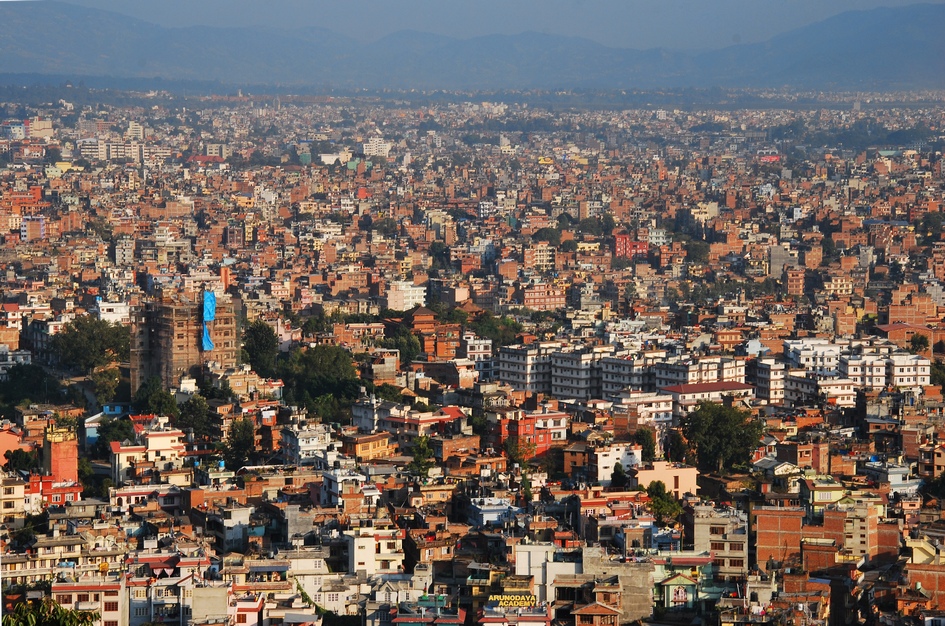 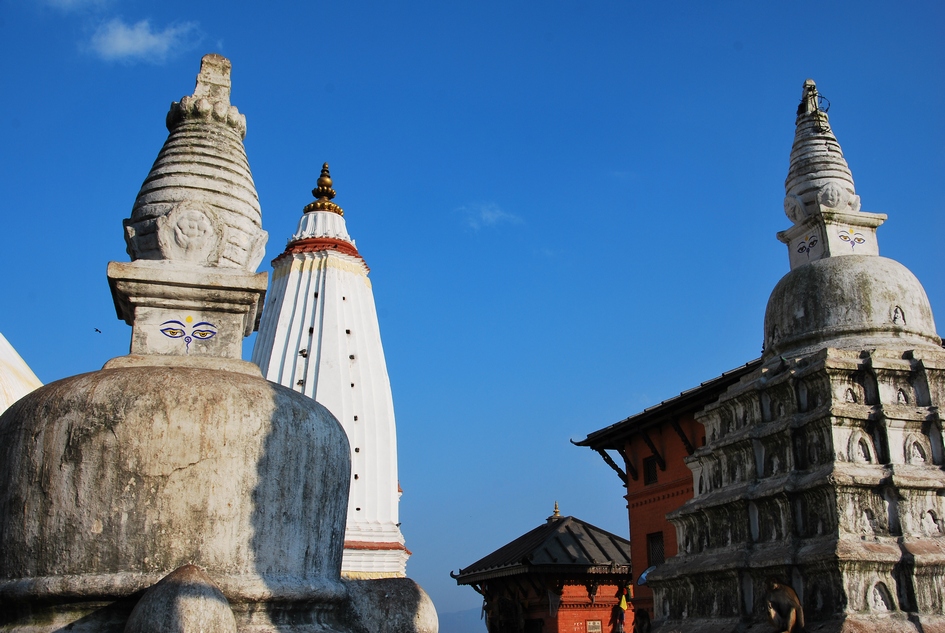 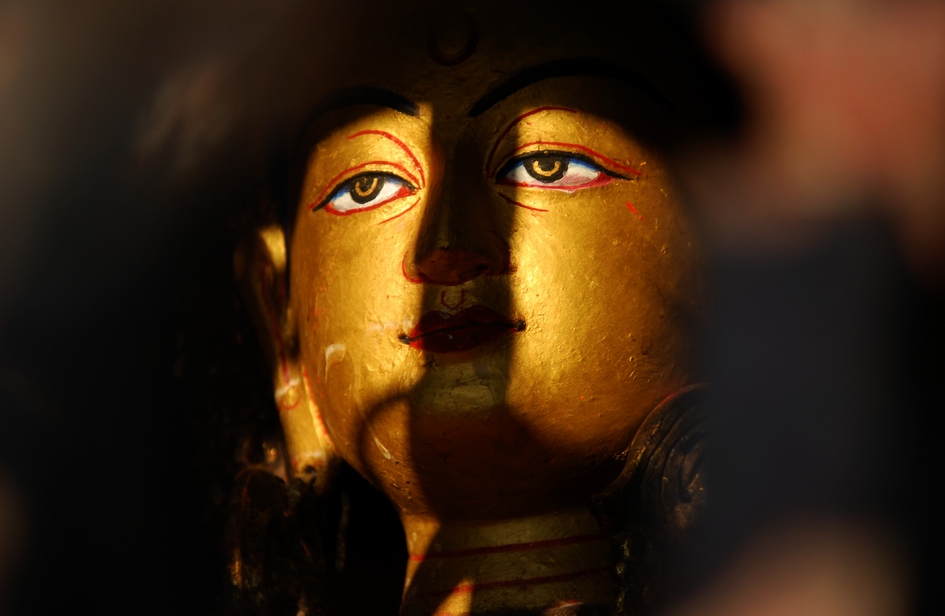 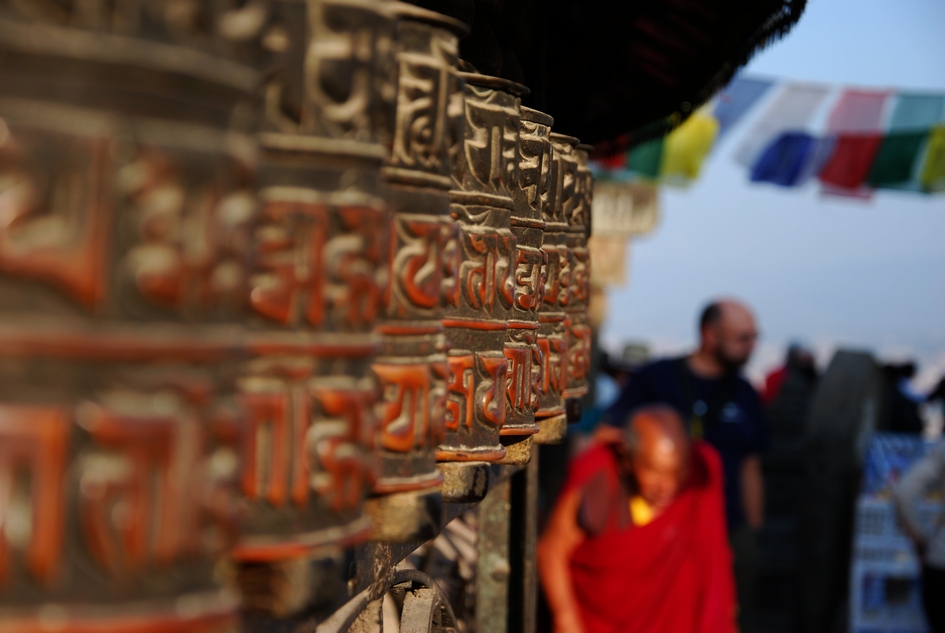 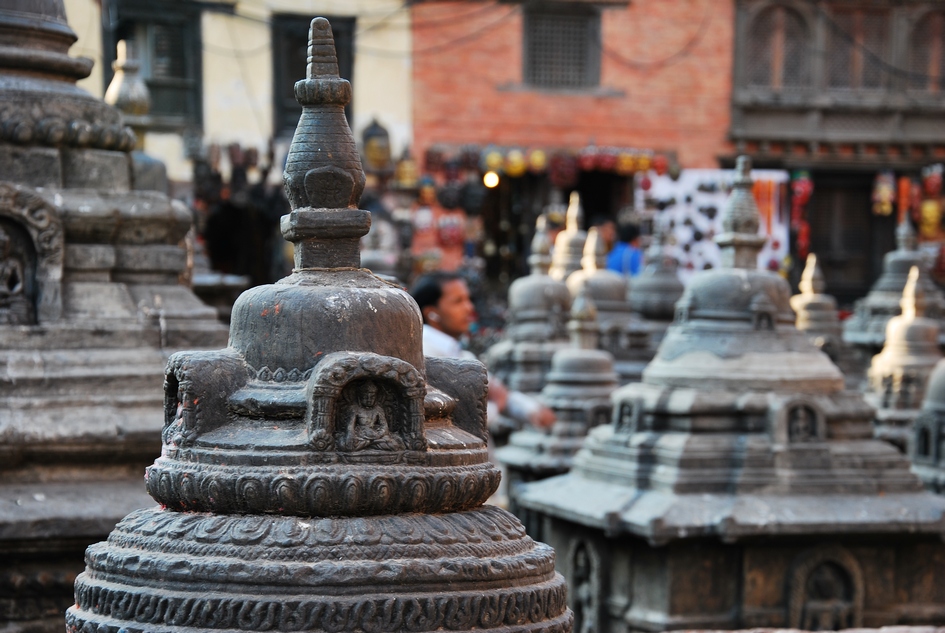 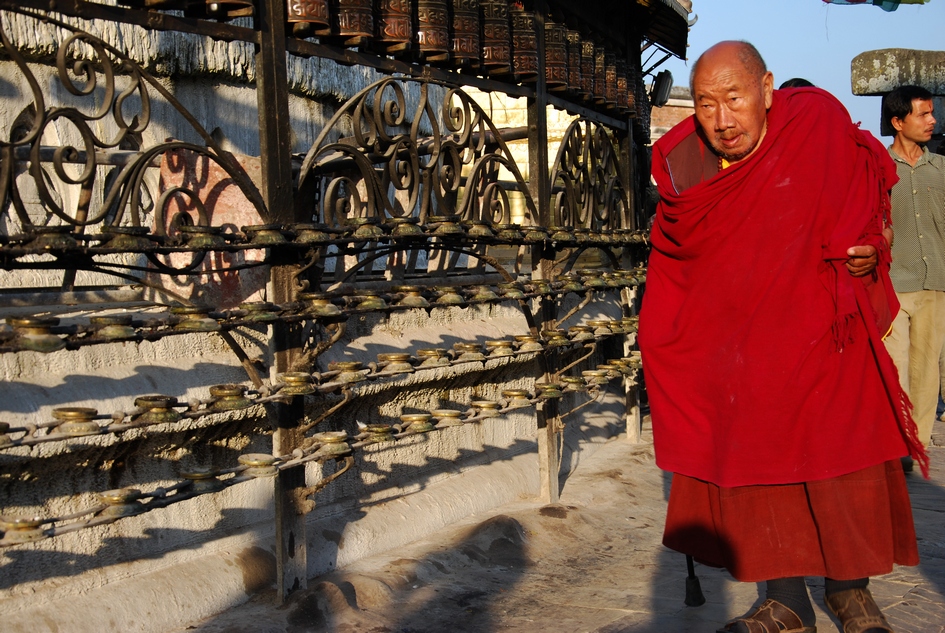 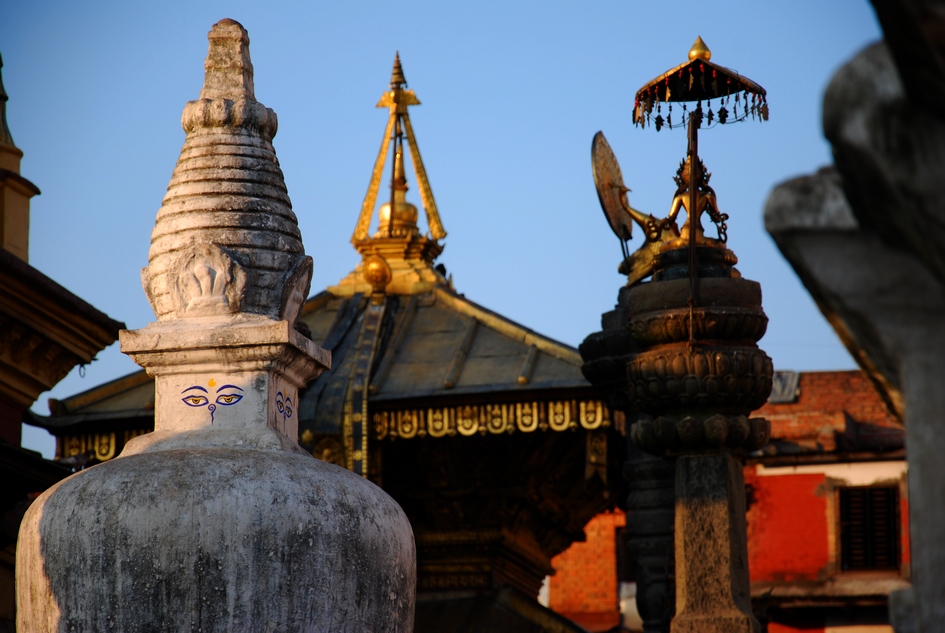 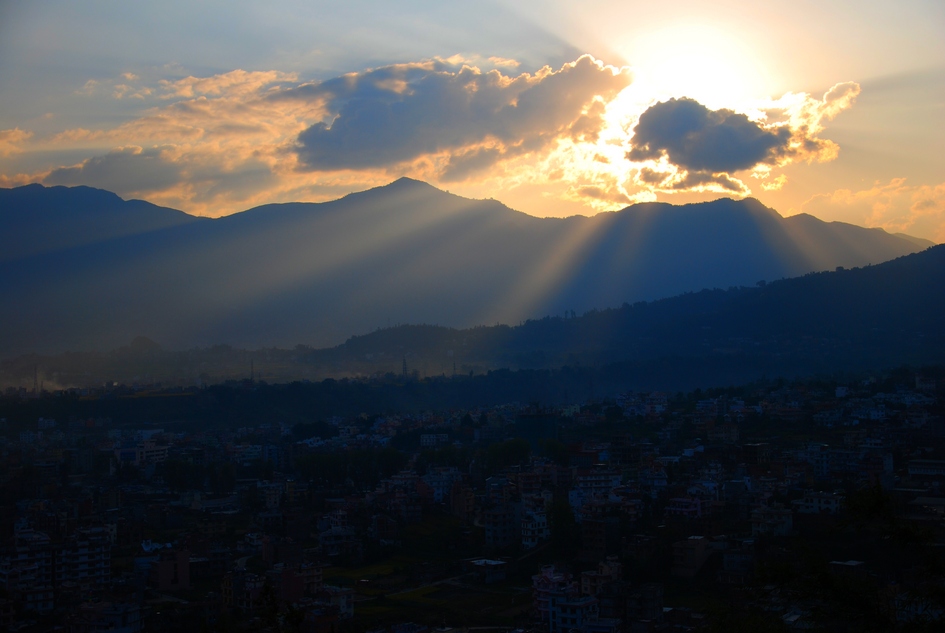 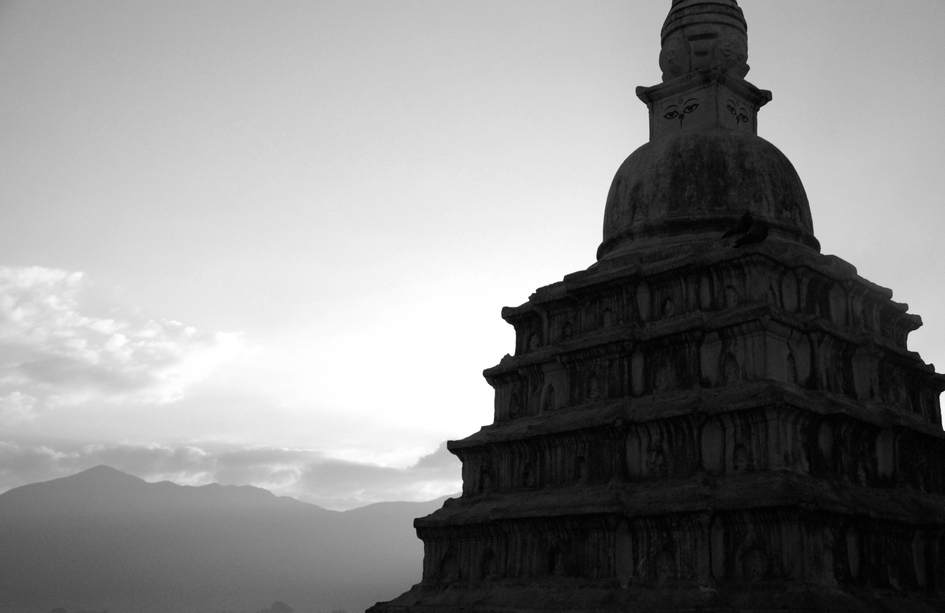 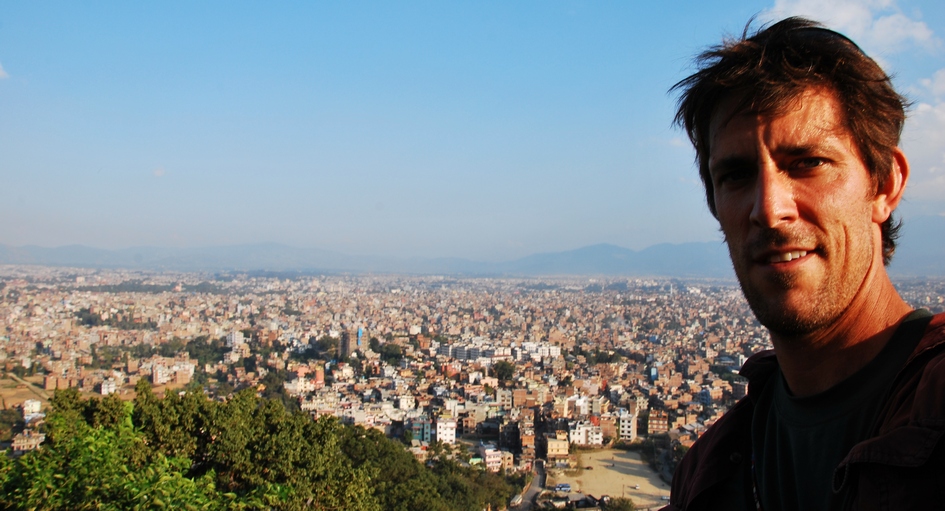 Tomorrow I head to Mustang, sometimes referred to as ‘The Last Forbidden Kingdom’ located in the northeast portion of Nepal and bordered by Tibet (China).

‘Mustang (from Tibetan Mun Tan (Wylie smon-thang) which means fertile plain) is the former Kingdom of Lo and now part of Nepal, in the north-east of that country, bordering China on the Central Asian plateau between the Nepalese provinces of Dolpo and Manang. It is roughly 80 km long (north-south) and 45 km at its widest, and is at an elevation of over 2500 m. Mustang is also known as a "Tibet outside the Tibetan Border" for it survived the Chinese invasion of 1951 and hence it fosters the original Tibetan culture, although it is now politically part of Nepal. Life in Mustang revolves around animal husbandry and trade. The region is the easiest corridor through the Himalayas linking the Tibetan Plateau and Central Asia with the tropical Indian plains, and it enjoyed a trans-Himalayan trade. Because of its strategic importance it went through many wars, and hence various cultural and religious practices thrived in parallel in Mustang (from Wikipedia).’

Although tourists are allowed a permit is required and is not cheap ($500 per person). And there has to be at least two names on the permit otherwise a solo trekker will have to shell out a cool grand. This is one of the major reasons I have been dawdling in Thamel for a week. Per my trakking agency I have been waiting for a German couple to arrive so I could join them on a tour of the Mustang region. However, when they did finally arrive yesterday they were none too pleased to discover Richie the American was going to tag along. I guess it would spoil their love adventure.

Imagine my distress when I thought my trip would be sabotaged by a couple of ornery Germans. I was beckoned to the travel office for a meeting and was pleased when I was told it would not be a problem. I would be provided my own guide and we would do our best to steer clear of Hansel & Gretel.

That might not be so easy. We will be traveling to the start point together by bus and plane and leaving from the same area. We will also probably end up at the same tea houses (accommodation) in the evening. The temptation to be obnoxious may be overwhelming. The total trip length is around fourteen days. Tomorrow morning I take a bus to Pokhara and from there a flight to Jomsom in Lower Mustang. We then begin the hike from there which should fill ten days (length of permit) from Jomsom to Lo Manthang (the capital) and back. I’m as giddy as a virgin on prom night.
Posted by Rich at 9:20 AM