Nov 21st, 2009 - In Chapter V of the “Kama Sutra”, On the Kinds of Woman Resorted to by the Citizen there is a list of woman not fit to ‘enjoyed’ (their term, not mine). The list includes: 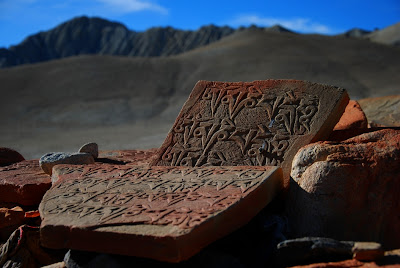 Do we really need to be cautioned against sleeping with lepers, and stinky woman? Pretty sure those take care of themselves. And I’m going to need a more specific definition of ‘lunatic’ (the book sheds no light upon this). Again, I cannot make this stuff up. 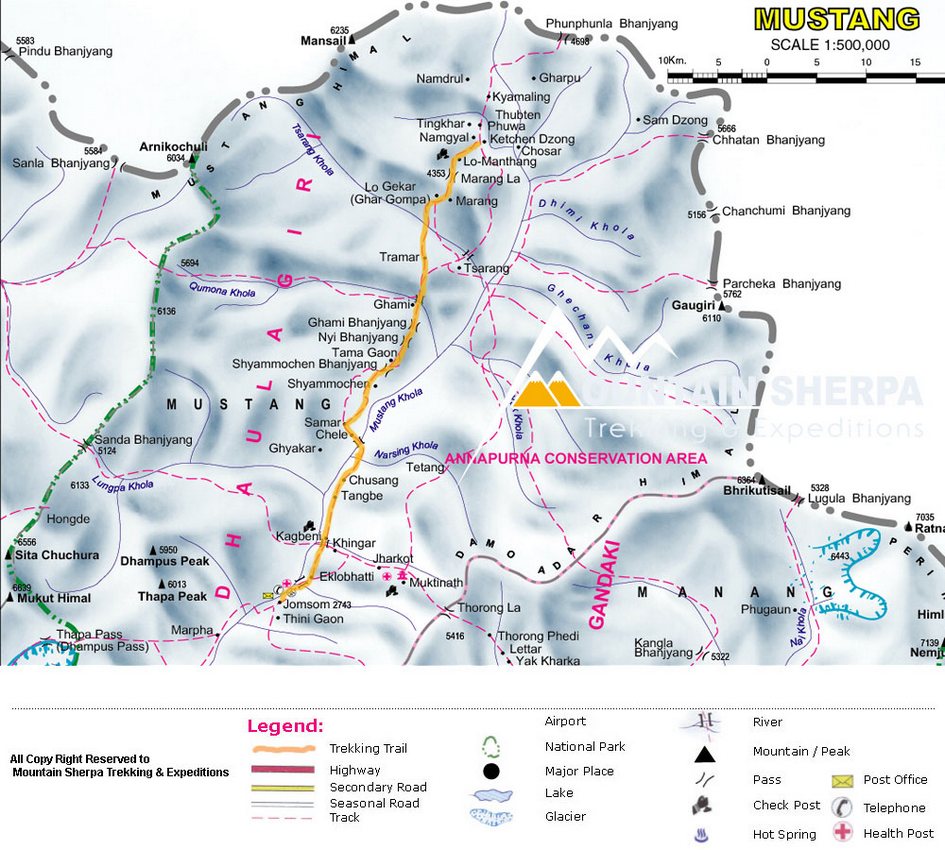 So we left Lo Manthang on Day 8 and began the journey back towards Jomsom. The previous evening I was treated to dal bhat with yak meat (it was delicious) and a viewing of the made-for-TV version of “Into Thin Air” by John Krakauer on VHS. VHS? You know you are in a savage land when you are forced to endure the abysmal picture quality of a video cassette player. Barbarians.

I was also entertained by watching the woman of the house enter the dining area of the kitchen, stoke the fire, throw in another pile of cow shit with her bare hands, and go right back to preparing dinner sans hand cleansing. Double yum.

We made our way to a village known as Lo Ghemi (or is it Ghami?) and I had one of the most sublime experiences of the whole trip……a hot shower. I thought I might melt. When I discovered that there was gas powered hot water at this tea house I came close to kissing one of the women in the kitchen. Perhaps, nine days is a bit too long without showering, but then again, what the hell do I know?

On the way back I ran into Mustang’s version of a traffic jam. On a narrow part of an uphill climb my progress was hampered by herds of sheep, pack horses, and people. Slowing down is not a problem but the horses and sheep kick up so much dust that to maintain position in the rear of one of these trains is to endure mild asphyxiation. Not only that the herdsmen are constantly whistling and grunting in an effort to keep their animals motivated and moving along. After a few hours it can start to wear on you and I seriously doubt the efficacy of the exercise, but the again, what the hell do I know? 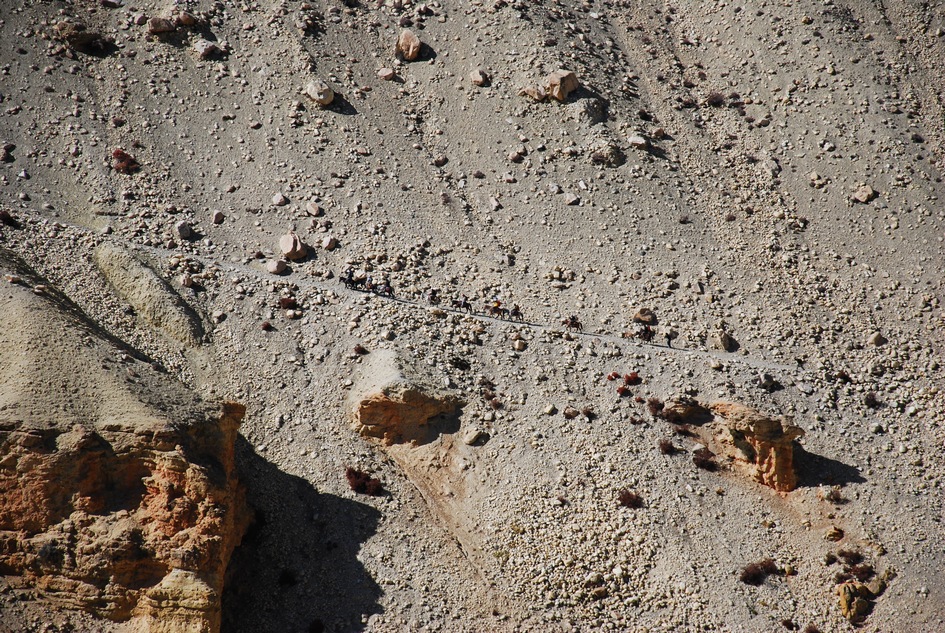 It was also on the return that the clouds rolled in and sullied the panoramas. This was not too disappointing as the weather on the entrance was superb. A causal glance towards the Himalayas revealed snow in the mountains and a few flakes even made it to the arid country of Mustang (when I went pee pee in the middle of the night I was accosted by a few diaphanous flakes).

I did, however, feel sorry for the folks headed in the other direction. It was getting colder, the skies were cloudy, and most of the locals were headed down for the winter. In my estimation I took this trip at the last possible moment to ensure a truly remarkable journey (notwithstanding the King’s absence of course). I’ve learned that most folks go in August and September but due to the lack of facilities it can get crowded.

By this time Hansel and Gretel were warming up to me and we even began having actual conversations beyond the mild pleasantries almost required when you encounter the same people day after day. Not that they were going to invite me to their home in Germany for beer and pretzels but we did get along well in the end. This, I am sure, was due in no small part to the sharing of my pharmaceutical stash (Doxycycline to be precise).

It appears that the duo was having stomach issues and doxy can assist so I offered them a few pills with the appropriate instructions. I already knew that Grets was having an issue but I was not privy to Hans’ intestinal tribulations until one fine morning on our return journey. We again found ourselves in the same tea house and again in adjacent rooms with the signature paper thin walls. Once again Grets and I shared a wall while Hans was in the bed next to her. Well, at around 6:30 am I hear unmistakable sound of flatulence,  phblaaaaaaat!, followed by the distinctly German ‘Sheisse!!!!’ (shit), an expression one makes in German when stubbing one’s toe or in the face of some other type of misfortune .

Confused? Allow me to assist. Hans pooped himself. Hans pooped in his sleeping bag. He literally ‘shit the bed’. Hans sprung out of bed and began attempting to clean up (this was clear by the sound of someone dipping a cloth in water followed by the repetitive rubbing of nylon). This took some time and required a trip to the toilet. Imagine lying in bed and this is the symphony to which you awake? Imagine trying to stifle laughter and avoid shitting yourself in the process. At breakfast when I overheard Grets telling their guide that they were now both having issues I was almost compelled to respond with, “No shit”.

On another day while stopping for lunch I was surprised to discover that in one of the rooms on the ground floor some young men were in the process of disemboweling a sheep. The room was filled with drying sheep parts and on the floor was the recently deceased lying on its back sans internal organs. I was not so much repulsed as I was fascinated by the whole thing. I watched as one of the guys, with one hand on the knife and another gripping one of the horns, causally cut the head off and then continued organizing and cutting organs much like I would go about rearranging my sock drawer. Many pictures ensued.

The highlight was when I saw the younger of the two standing in front of me with a small silver bowl full of pieces of sheep liver while nonchalantly swallowing them like it was a bar snack. My friend was not rude as he offered me one of his tasty morsels. I came close. I came really close but intestinal prudence prevailed (assisted by Gretel’s remonstrations). Curiosity was killing me but I abstained. 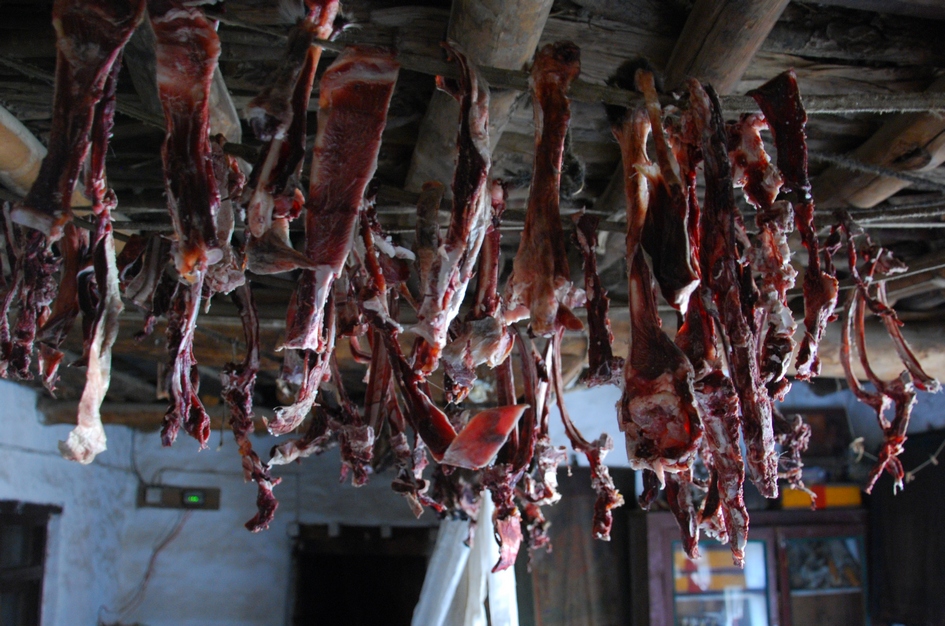 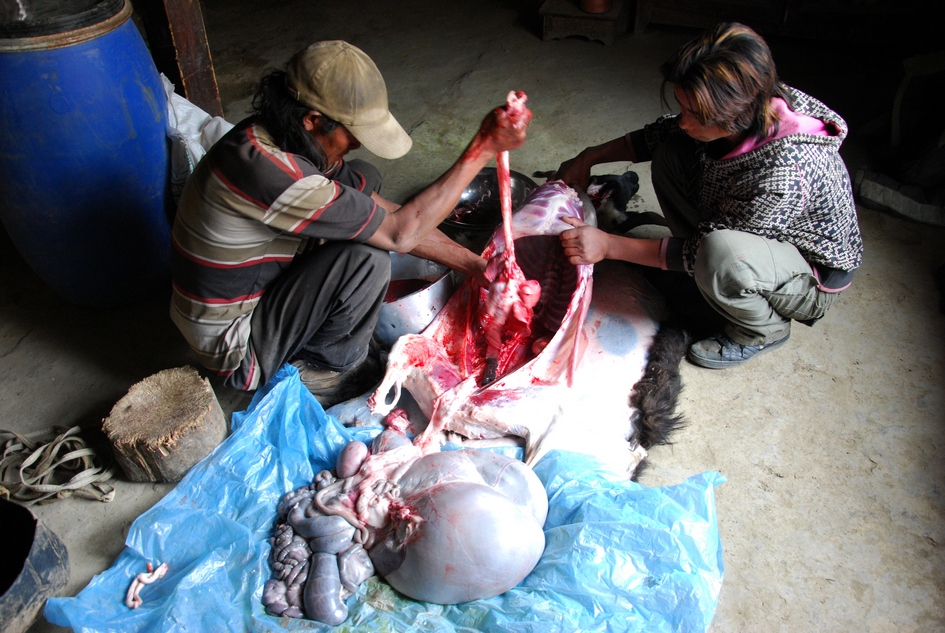 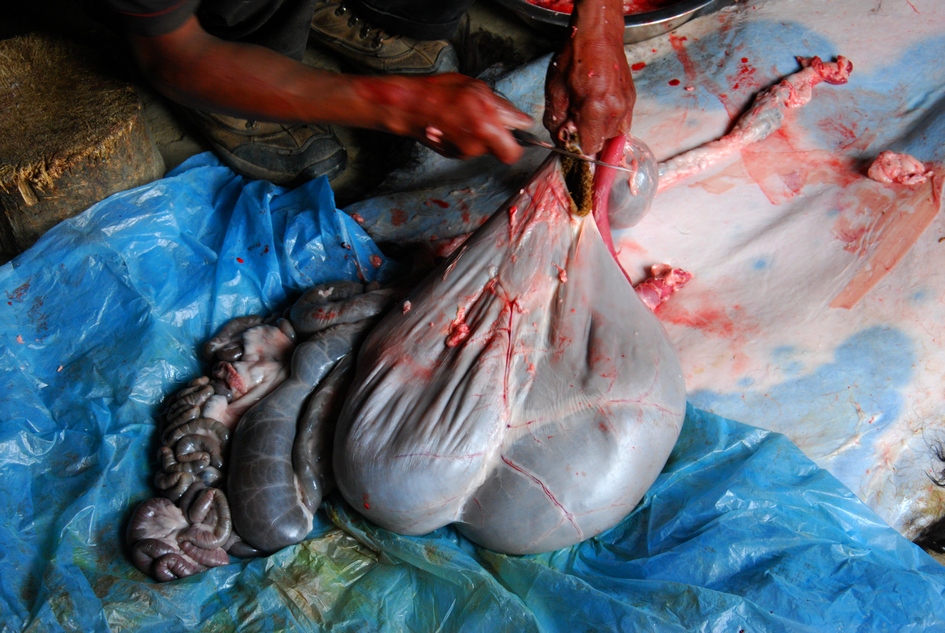 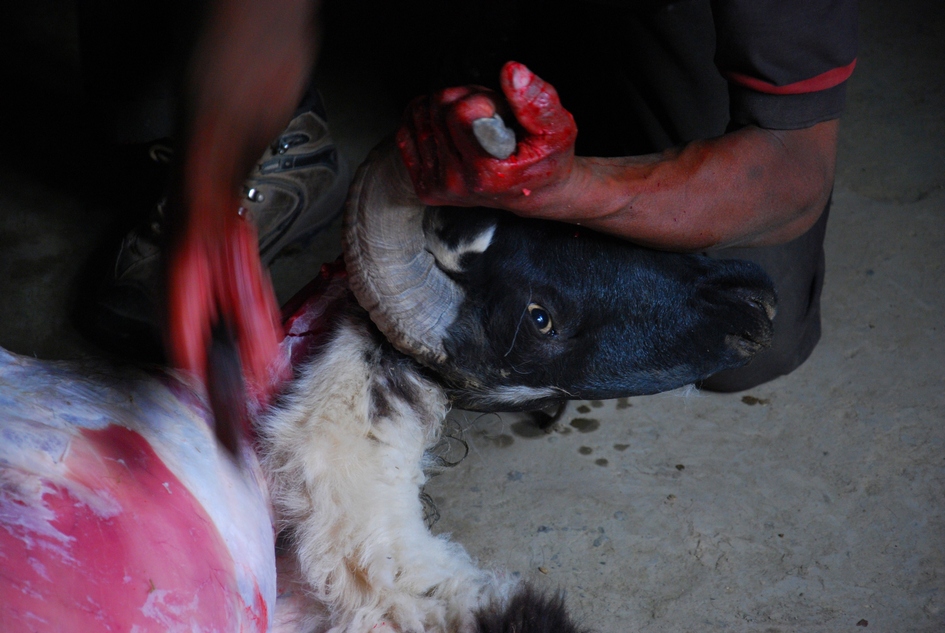 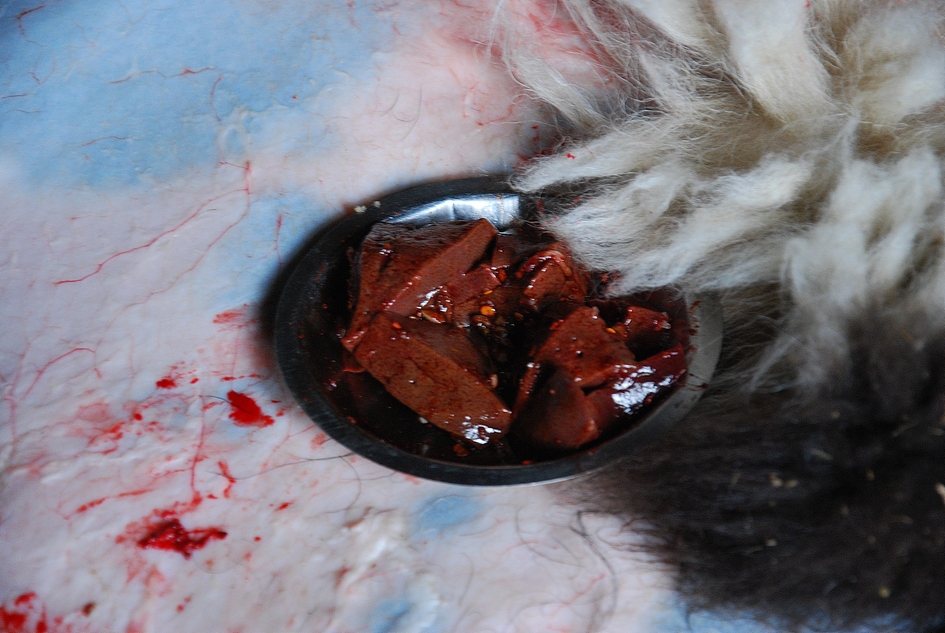 The rest of the trek was fairly uneventful and since we passed along the exact same route (this time with cloudy skies) I took few pictures. At a tea house in Kagbeni I was surprised to encounter a couple with a newborn baby occupying one of the rooms. Who the hell brings a seven week old baby on a trek in Nepal? I was stupefied and made no to attempt to hide my bewildered countenance. I wanted to just walk up to them and say, ‘Seriously’ while pointing at the infant but decided against it. I never did find out where they were from but someone guessed eastern Europe. Very strange. So I suppose all you folks with young children should get off your asses and get out there. If they can do it so can you. Let me know. I’ll start stockpiling formula.

That was my trip to Mustang. I am now back in Kathmandu planning my next adventure. It appears I may do a hike in Langtang National Park although I am not feeling 100% so there may be a delay. I was lucky to visit Mustang when I did as the wind of change is upon the area. Although there is distinct evidence of modernity and development the pace will soon quicken substantially as a road is being built that you will be able to take from Kathmandu all the way to Lo Manthang. Once finished I have no doubt the character of this once forbidden land will be changed forever. This will no doubt improve the lives of all those that live along the route but with it will come the tsunami of mass tourism. I suppose progress has its price. 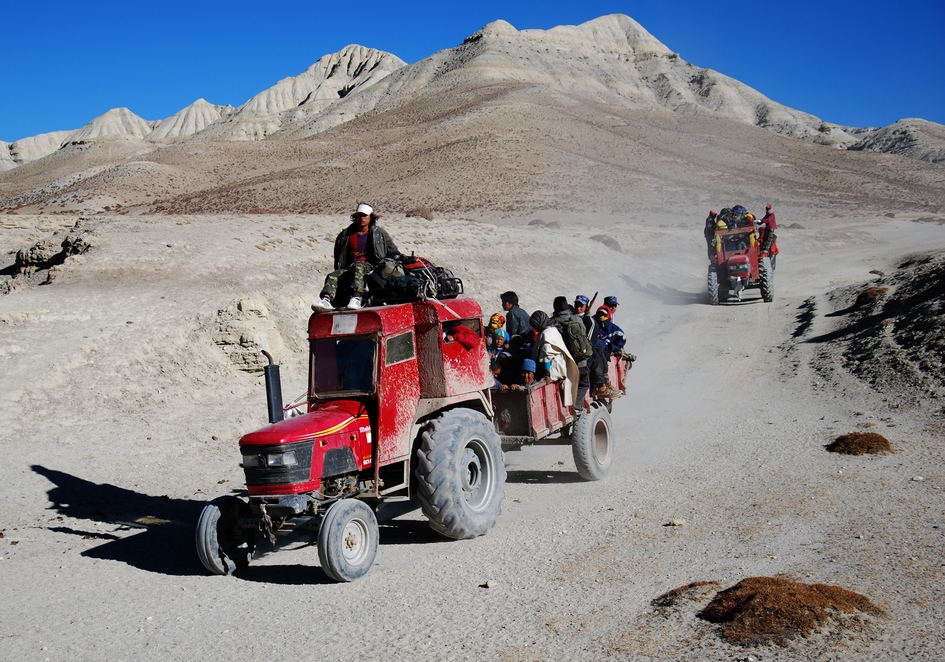 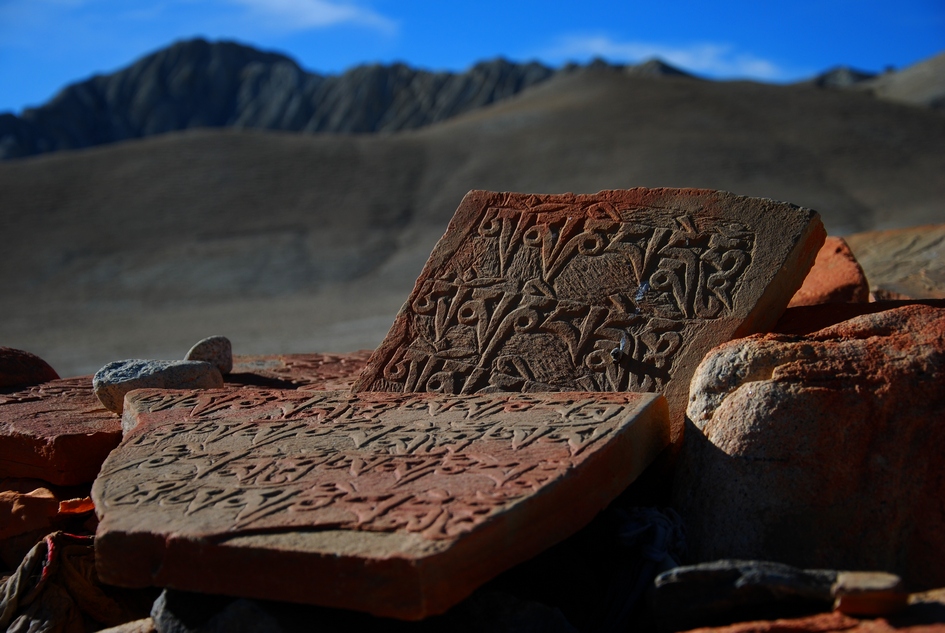 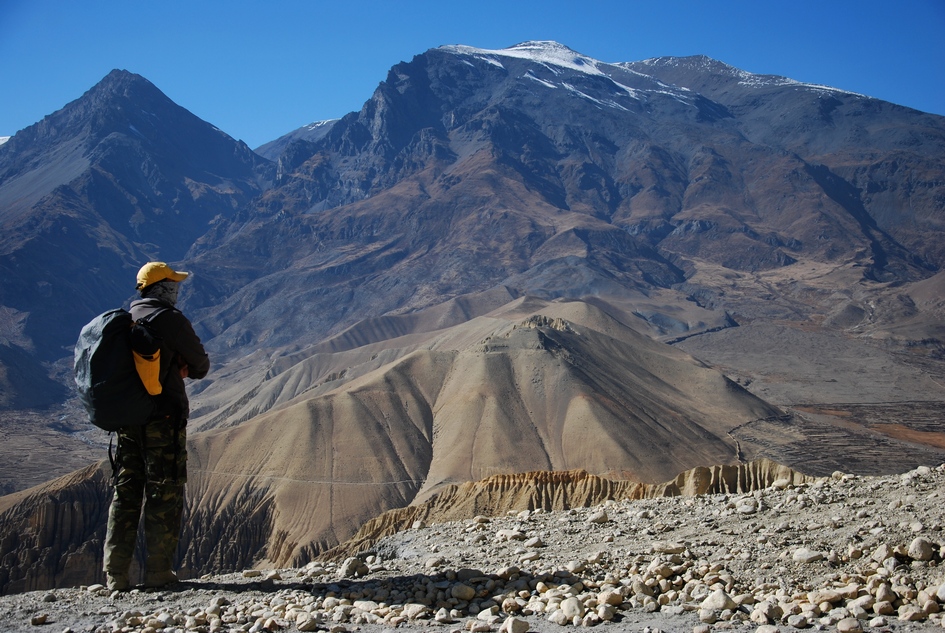 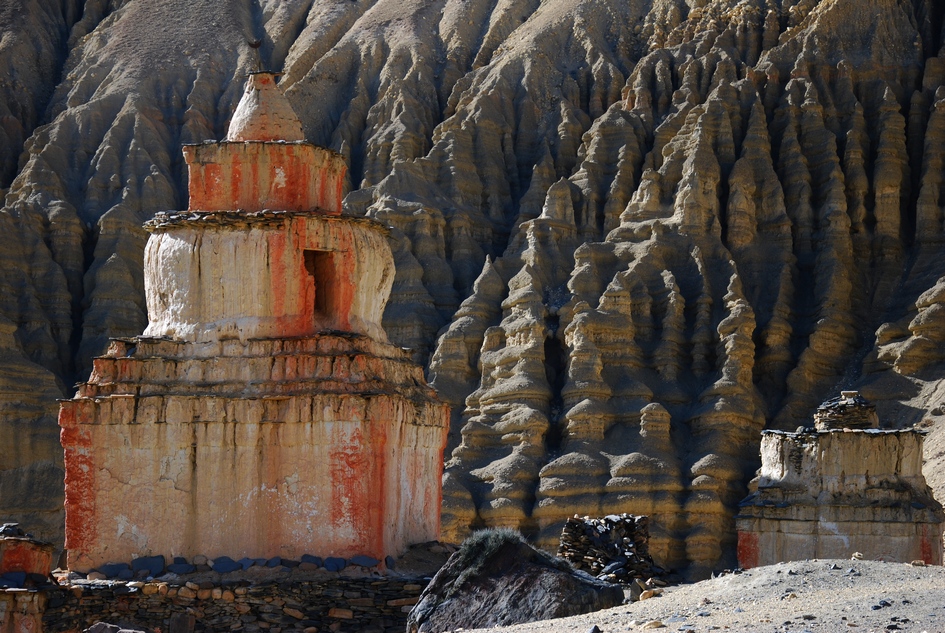 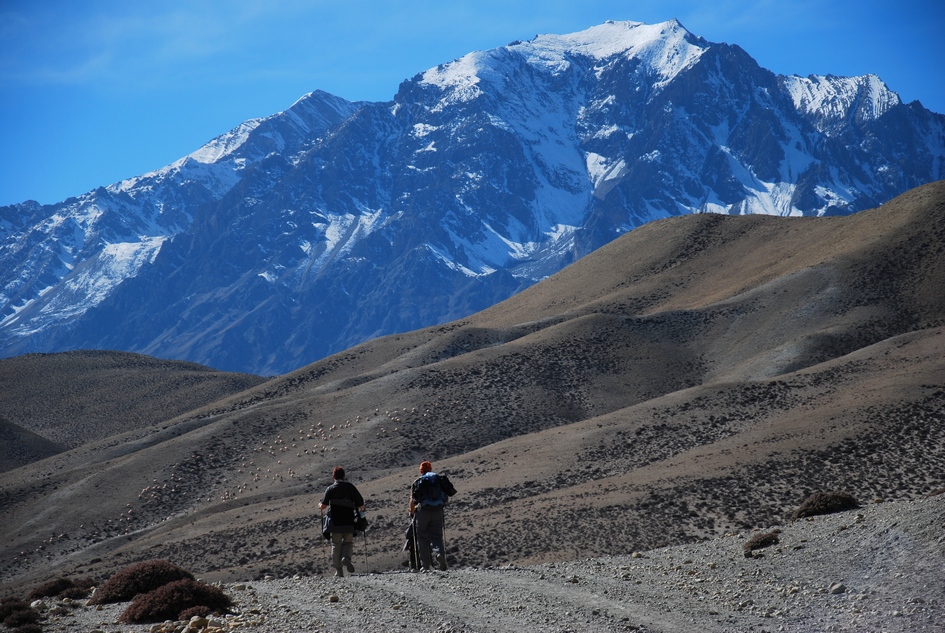