Jan 29th, 2009 – No trip to Indonesia would be complete without climbing a volcano. That’d be like going to Vegas and not dressing like a preacher before getting stupid drunk and gambling like an asshole. I lost my ‘Ring of Fire’ virginity on Mt. Agung, a still active stratovolcano located in east Bali. It is the holiest mountain on the island and, not surprisingly, the location of the most important temple (Pura Besakih).

In fact, I was told that there was an important ceremony today at that very temple. It is constantly jamming and, if you can believe Wikipedia (I do implicitly making me an unapologetic wikiot), holds at least seventy festivals per year (a year being 210 days on the Balinese calendar). Mt. Agung is believed to be a replica of Mt. Meru, the central axis of the universe. In other words, Don’t F**K with Agung! 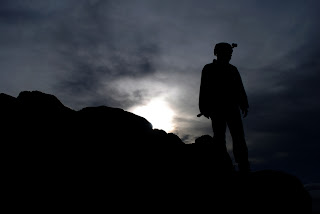 There are two routes up the mountain: the long arduous way beginning at Pura Besakih leading to the highest point or the lite version starting farther up the hill at another temple on the east side, Pura Pasar Agung. I was much more interested in the ‘pain-in-the-ass’ route but I was informed that it was closed as a result of the ceremony. Hindsight being that bastion of illumination I have come to know and love, I suspect I may have been told this in order to save a guide the trouble of going the hard way.

So the guide picks me up at 2 am. That’s right 2 am. The idea is to reach the top in time to watch the sunrise. Yes, the sunrise would be super but considering it is the wet season the likelihood is not so great. And everyone gets picked up at 2 am regardless of ability. I was thinking that since I am alone the going would be a bit faster and we could leave a bit later but who am I to protest? Nobody. One thing you will discover here is that catching the sunrise is of fucking paramount importance. Not attempting to do so makes you a douchbag….even during the wet season….when your chances are smack dab in the middle of slim and nuh-uh.


So before we begin our climb my guide (along with every guide) must pay the proper respect to the mountain through prayer and offering. Observing these mini-ceremonies is rather intriguing and can lead one to envision the spirit of Agung holding its breath while the interlopers attempt to mollify any potential churlishness. Part of his offering included incense, which he could not light because of the rain. Omen #1. It had rained really hard the day before but I was told that it was normally ok in the morning. I was also told that if it was raining before we left in the morning there would be no climb and it would be pushed to another day. I am flexible so no biggie. If I had to wait another day I could adjust.

I noticed my guide was wearing jeans. Omen #2. He had to tinker with the wires in his headlamp to get it working. Omen #3. So we began the climb in the rain. I did not think the rain was that big of a deal but I could tell that Wayan (my guide) was a bit concerned. About 45 minutes into our climb I could see lights above us and heard voices. Who the hell would be coming down the mountain at 3:45 am? That would be the group of tourists (3 females, 1 male) coming back down the mountain because they decided that the rain was too much for them to press on. Omen #4. Now granted, these were four Russians in tennis shoes and light rain jackets. I probably would have thrown in the towel myself. But after speaking with the other guide I could tell that my own guide’s concerns were growing. At this point I am attempting to assess the situation. Although not stating it explicitly Wayan clearly does not want to keep going. We stop and wait repeatedly to see if the rain will stop. He tells me that with the clouds we will probably not be able to see anything at the top and, in addition, it is a bit too windy. He asks if I could do it another day, says he can call me and tell when to come back. I am thinking to myself that we came this far. Why not give it a shot, right? I tell him I do not know when I can come back. I also point out that I am not so concerned with the view, that I enjoy hiking for its own sake. He loves that response. Loves it.

So I am not sure if I should just say F it and tell him to turn around or just keep going. After all he is the guide and he would know if it were too dangerous to climb. On the other hand I am fairly certain I am still going to have to pay for the trip. He therefore has no incentive to push on. Does he just not want to hike in the rain or is there a legitimate danger? I’ve been to enough countries to know that as far as guides are concerned it could go either way. And I think that most Balinese see no real rational reason to climb a mountain just for the hell of it. Most probably view it as just a job, not a task undertaken for its own sake.

I did not force him to keep going. I merely failed to acknowledge his clear signals of ambivalence and mounting concern. Had he been more adamant I would have relented….probably. Am I an insensitive asshole? Perhaps. Did I mention there was a bit of heat lightning in the distance? I heard no thunder so I thought it would be okay. Apparently, I’m aspiring meteorologist. We spent the better part of an hour sitting and waiting for the rain to stop. It did. Reluctantly (at least on Wayan’s part), we trudged onward and upward.

Surprisingly, it turned out hunkey-dorey. When we emerged from the tree line on to barren rock the rain had stopped, the sun was poking through the clouds, and I was able to look directly into the volcano once I reached the top. In fact, it turned out to be pretty nice. Not only that I was the only one up there. So all of Wayans worries were for naught. What is the moral of the story? Fuck the omens. Well, not really. I suppose it could have gone either way. I was fortunate that it cut my way. 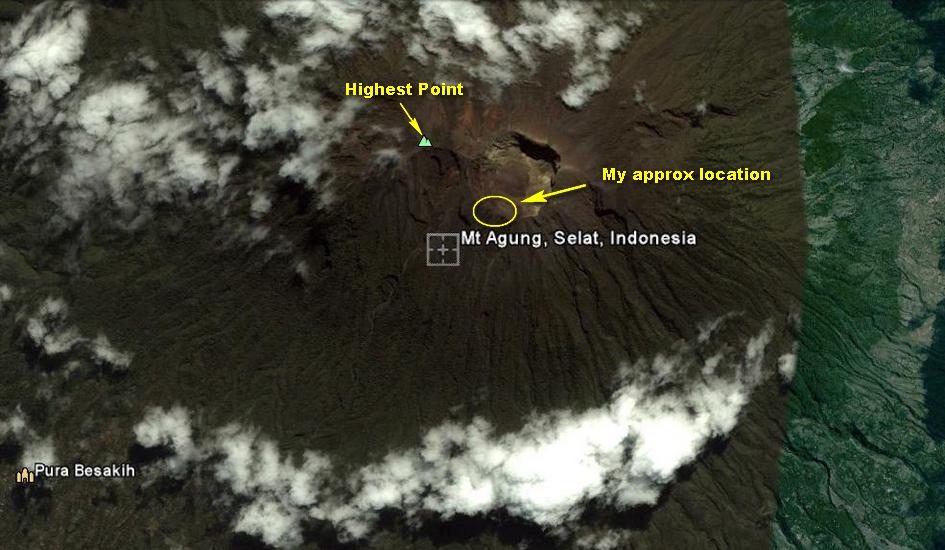 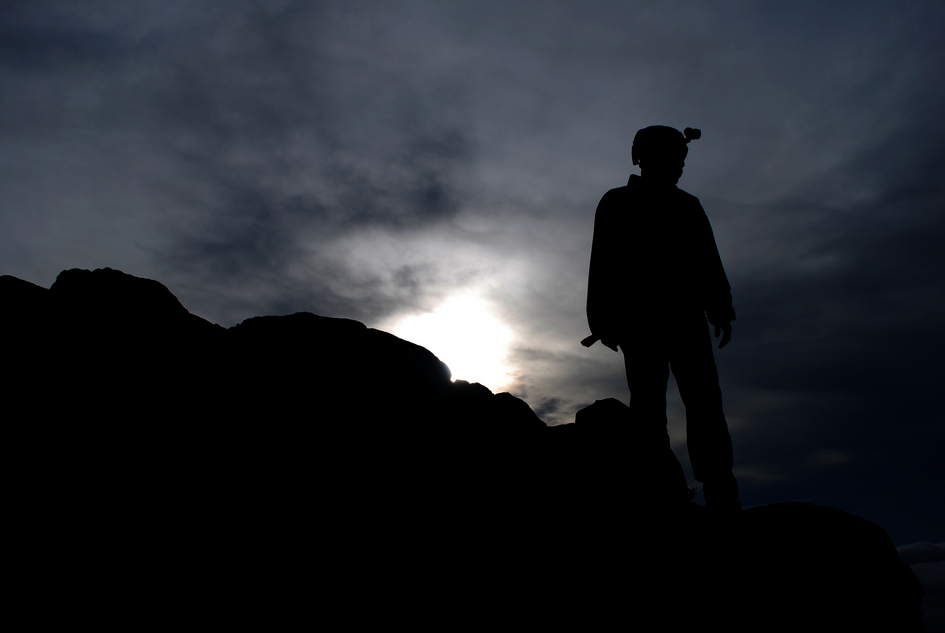 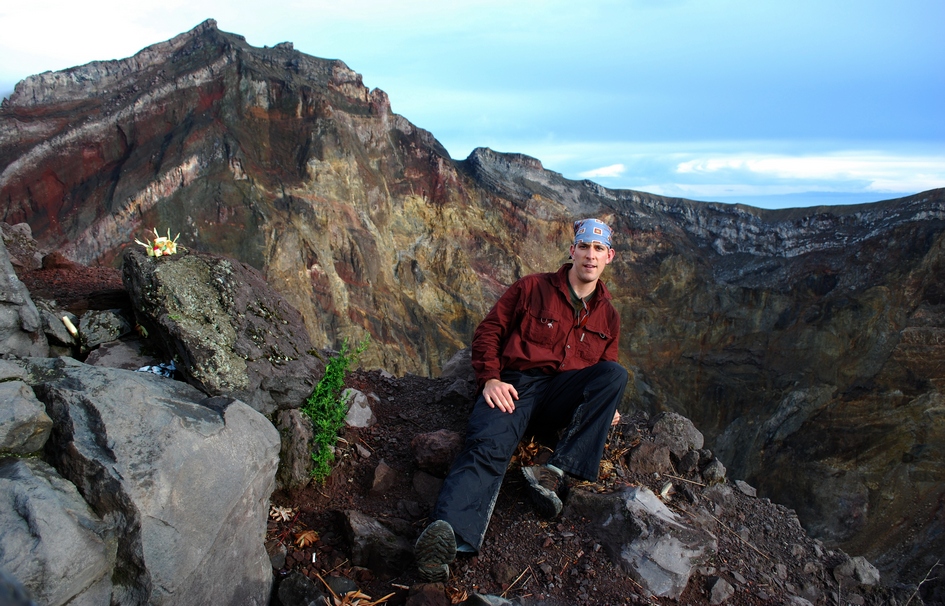 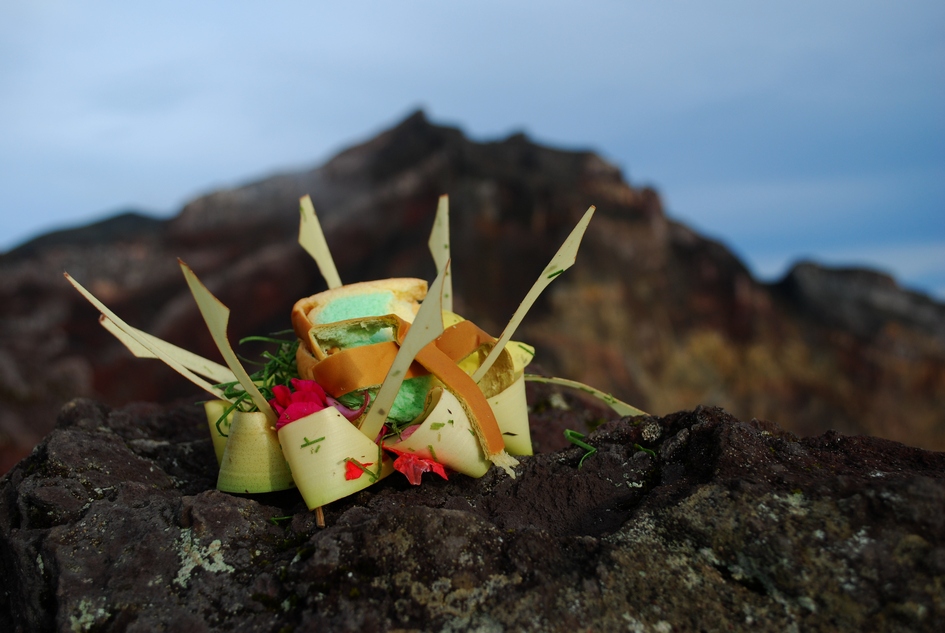 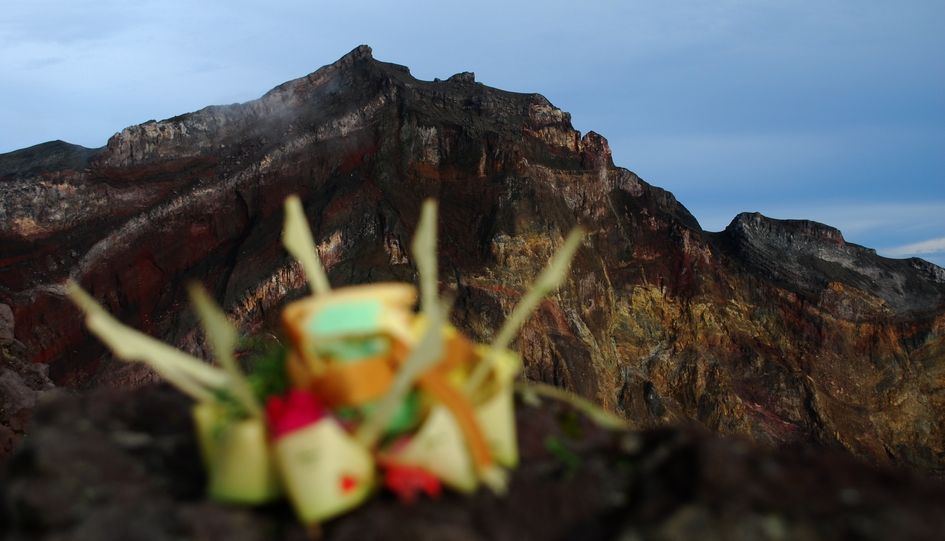 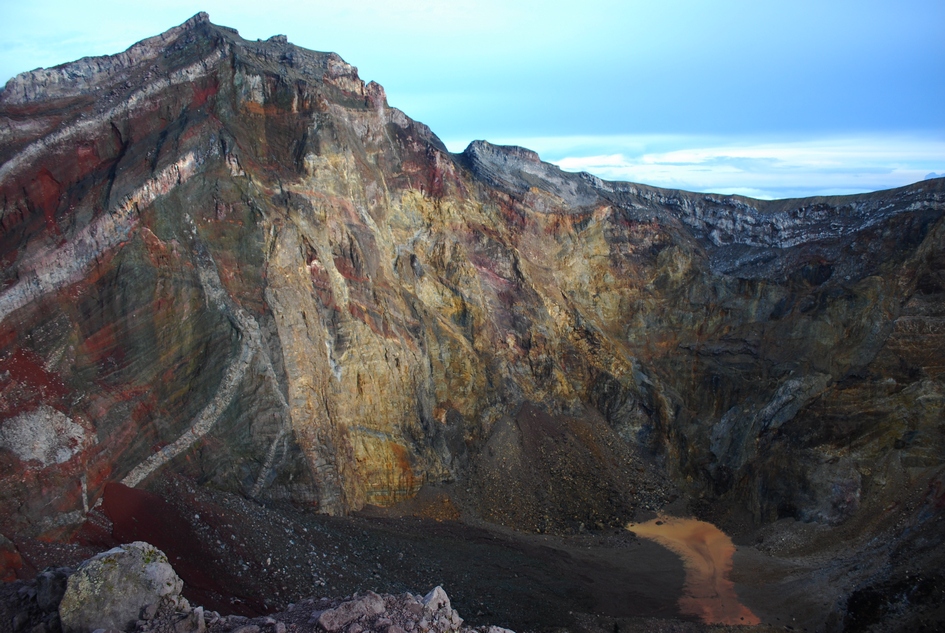 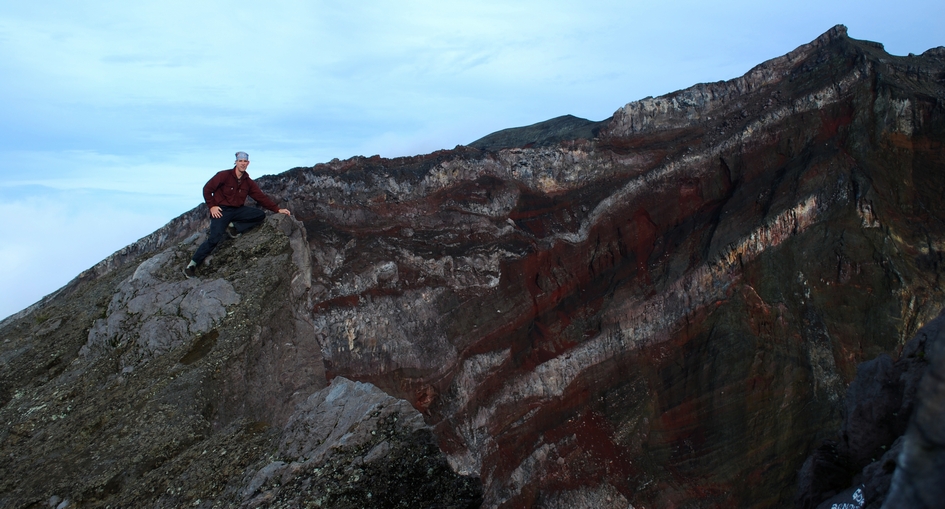 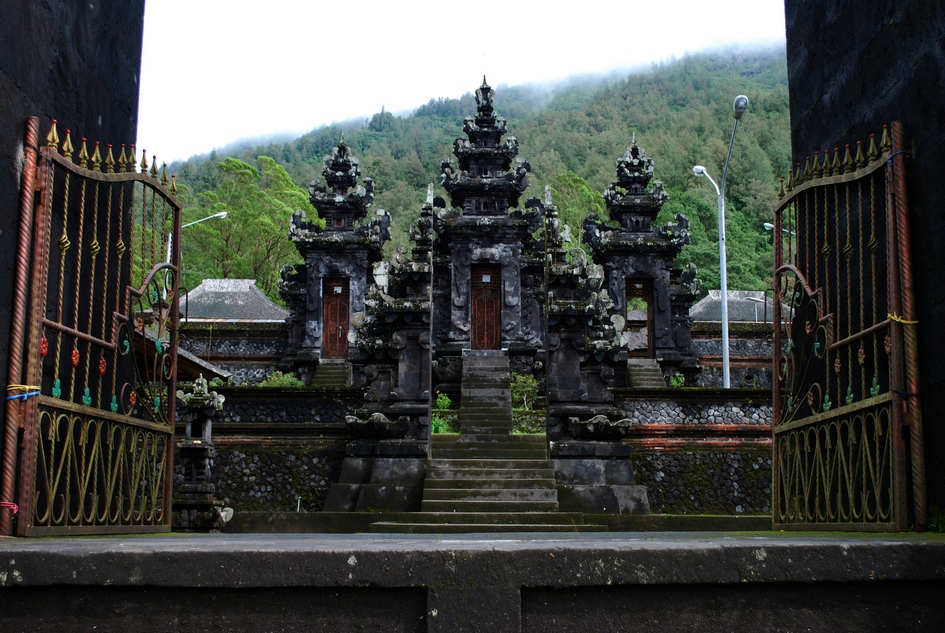 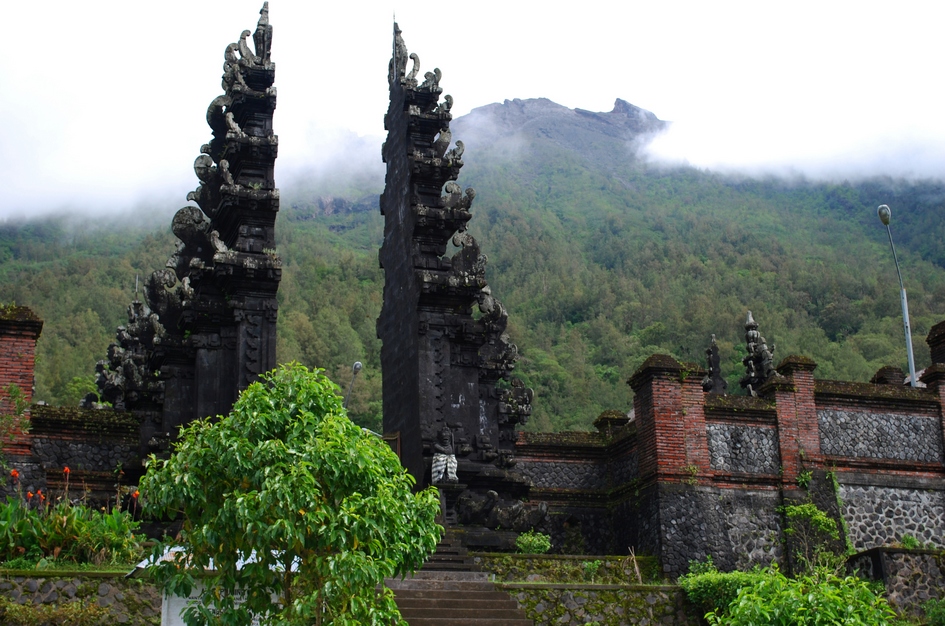