For an updated version of this post/website, go here.

March 5th, 2009 - I saw a man on the road wearing a t-shirt that succinctly and unambiguously showcases his view on terrorism. Naturally, a picture was in order. I have yet to find a shop that sells them. I figured I would wear it all over Indonesia. 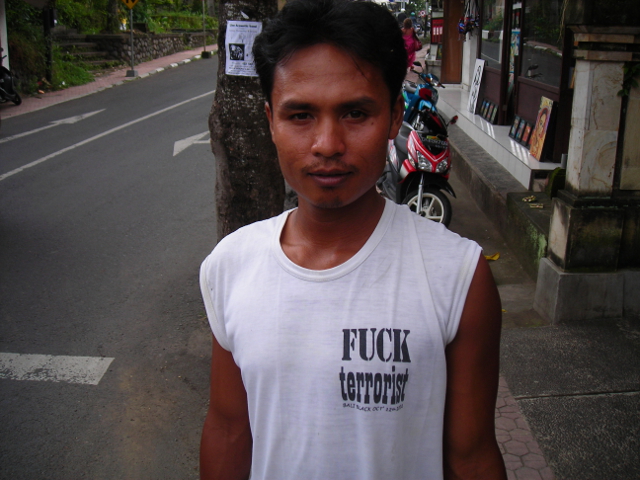 More language barrier misunderstanding excitement came my way yesterday. As I am sitting in the office of the folks that are helping me with my visa and chatting with my pals that work there, they causally pass on information that would torpedo my whole trip and make my motorcycle purchase a ginormous waste of greenbacks. It is common practice for people with my visa (of the six month social-cultural variety) to leave their passport in the office of the company assisting them and carry only copies of all necessary documents. My current visa is good for two months with the possibility of extending up to four months for a total of six. My first extension is coming up in April. By leaving my passport in the office my visa may be renewed without me having to be there, thus allowing me extra time to explore parts of Indonesia w/o having to worry about getting back to Bali. The second extension requires a fingerprint and photograph so I must return for that. I thought the third and the fourth extension were similar to the first (i.e. physical presence not required) but yesterday I was suddenly told otherwise.

First I was told that if I want to go to Sumatra, Kalimantan, or Sulawesi I should carry my original passport with me. That would've been nice to know. I was then informed that it will take up to two weeks to process extensions two, three, and four, extensions that require my presence. Huh? This means that just when I receive my one month extension I only have about ten days before I have to apply for the next extension. Well, that's f***ing convenient! Perfect if I want to circle the immigration office for six months. I do not. Super. Thank god I purchased a motorcycle so I could go anywhere in Indonesia.

So at this point I am attempting to remain calm. In addition to my visa agents these guys are also my friends so tact is essential. But it is not so easy when your whole trip is disintegrating before your eyes. If you put an ear to my head right then you would’ve heard a slightly muffled MUTHAAAAAAA FUUUUCKEEEEEEEER!!!!!!!!!!!!!!!

I was thinking that perhaps someone could have mentioned this before I dropped a pile of cash on a motorcycle. Call me nutty. Maybe the immigration office should double as a spa hotel. That way I never need to leave my room. Or at least add a drive thru window so I could just zip through on my weekly rotation around island.

I love the people here but sometimes there is not so much thinking outside the box. This is an often times frustrating characteristic of the third world and by no means endemic to Bali. The other day I wanted poached eggs. An order comes with two but I was hungry so I ordered four. They gave me two complete orders of poached eggs on separate plates with garnish and all. With both plates in hand and nary a hint of sarcasm I slid the eggs from one plate to the other. The young female server giggled furiously after that one. So did I.

There is no maliciousness involved and they are sweet and innocent most of the time that it is impossible to become angry (assuming you're not an asshole). If you are one of those ‘I’ll have the club sandwich without the bacon, light mayo on the side instead of on the bread, avocado instead of tomatoes, hold the pickles and a banana lassie with skim milk and no sugar’ then you might as well fling yourself off a bridge before you dine out. I eat anything (chicken feet for example) even when it is not what I ordered. Life is so much less complicated when you spend most of your time not giving a flying rat shit about such things. I wonder if they serve rat shit anywhere? I’ll let you know.

So I left the office last evening on the verge of handing the keys to my motorcycle to the first passer-by with instructions to have a blast. Instead I went to the office of another agency (a competitor no less) to confirm the dire news. What did I find? They basically contradicted everything I was just told. Super. Now what? I considered allowing the other place to provide assistance but considering I was friends with the first place I knew this could get sticky. So I decided to go back the next morning and see if things had changed.

Guess what? Now I am back to everything being just hunkey dorey. No problem or 'Tidak apa-apa!' as the locals would say. Game oooon!! Maybe. At least until tomorrow when I find out new legislation was just passed requiring me to provide fingerprints, a photo, a urine, semen, and stool sample, two locks of hair, three toenails, a pint of saliva, two turtle doves and a partridge in a pear tree. I’ll probably also have to successfully negotiate an obstacle course while walking on my hands and humming the Indonesian national anthem. And don’t forget the ankle bracelet with GPS and the mandatory hourly phone call to immigration. Slap me in the balls and call me Billy Squire. No idea what’s going on. Ever.

Author's Note: Most of the folks that leave their passports in their visa agency's safe live in the immediate area (say on the island of Bali for example) and rarely venture outward. And if they do they retrieve their passports before doing so. Not an option for me. The gentleman at the other visa agency told me that copies of your passport and a letter from your visa agency should be enough to dissuade police from taking action. Not so reassuring but I went for it none the less. Fortunately, I never had a problem but I could see where not having your passport with the current visa might get you into hot water. I was lucky but you might not be.
Posted by Rich at 11:39 AM