March 1st, 2009 -Where to begin? A couple days previous I spent some quality time with my new Indonesia bros. They invited me to play soccer with them and some of their friends. I agreed . . . . reluctantly. Although I jumped at the chance to hang with the locals in a non-tourist setting the idea of playing soccer does not excite me.


This is because my soccer ability is on par with my reservoir of mechanical knowledge. I suck. Bad. Lucky for me I never had the opportunity to showcase my footwork. This is where the Balinese version of the space-time continuum comes into play. If you are told you will leave at 6 pm, play at 8 pm, and be back by 10:30 pm it is to be interpreted as some sort of nebulous guideline subject to alteration.

After arriving at the indoor soccer facility at around 7:45 pm I was to learn that a court had been reserved for 10 pm. Super. As much as I relished the idea of sitting around for two hours watching others play soccer followed by an additional hour of me sweating profusely while simultaneously making a complete ass out of myself I was relived to hear that my compadres did not wish to hang around either.

So off to dinner we went. Their treat. They took me to a food stall down a side street in the tourist infested city of Kuta. As far as I could see it was locals only. They ordered for me and when the bowl of soup was placed before me I thought, Huh. That looks a lot like chicken feet in the bowl. Naaaaah. That can't be the foot of a chicken. Who the hell would eat that? Answer: I would. It is true. I popped my proverbial chicken claw soup cherry. How did it taste? How the f$%k do you think it tasted? Small bones wrapped in flesh. Yum. Actually, it was not all that bad. The flavor was nice but the texture...ehhhh, not so much. Maybe next time we can sample duck penis pate (not sure if it exists but my fingers are crossed).


After that we took a cruise down Kuta's main drag, which is basically party/debauchery central. Not my idea. We were apparently cruising for honeys which entailed my Indonesian counterparts whispering borderline salacious comments at passing female tourists of varying denominations. Nice.

However, it was interesting to see the monument erected to memorialize the victims of the 2004 bombing. It was right in the center of the action and must have been a horrible experience.

The next day I was supposed to meet the crew for a barbecue at a friend's house. But it didn't work out. More Balinese space-time continuum at play. 'Close by' can be roughly translated as a 25 minute ride by motorbike. I had a previous engagement so I was forced to decline. Most of the time I have little clue as to what the hell I will be doing, where the hell I will be doing it, and how the hell long it will take. Throw in a language barrier and you have a surprise around every corner.

It is common for Indonesian male friends to refer to one another as 'brother'. My pal Dhemy (the gratuitous F word using bloke) has taken it to the next level by assigning himself and my other friend, Agus, my last name. Some people bring home Balinese art. Looks like I get to bring home the latest additions to the Rich clan. Congratulations! Twins! 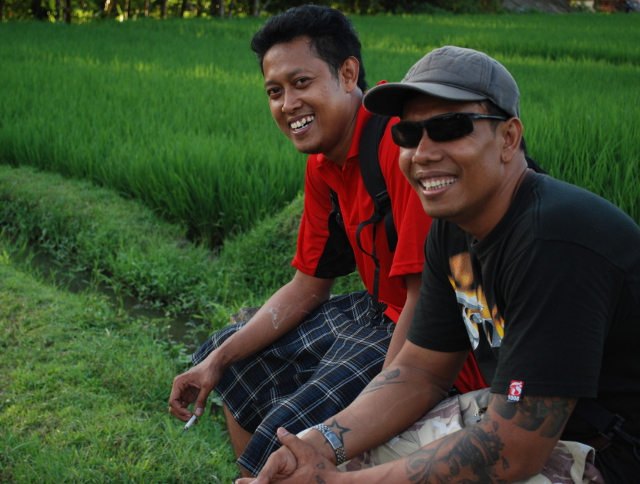 Today I spent five hours getting my motorbike checked out. Now keep in mind it had recently been serviced at a huge modern Honda dealership in Denpasar. Apparently, brake pads worn down to the metal are not considered a high priority. Why would it? Who needs to stop anyway?

I also needed a master cylinder. Guess that does not make the 'Priority Maintenance List' either. WTF? Good thing I decided to get it checked again. Hopefully, that guy knew what he was doing. 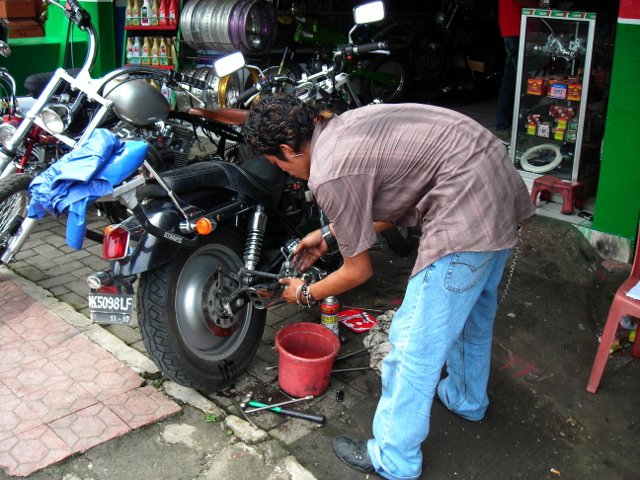 As far as my motorcycle goes I've adopted a new philosophy: Discover the world. Drive like a pussy. I'd like to slap that on a t-shirt.

Oh yeah, they sell baby chickens dyed various colors on the side of the road. I believe their life expectancy is 10 minutes, give or take. Shhhhhh...Don't tell PETA! My American friend purchased two. The chicks and I bonded. 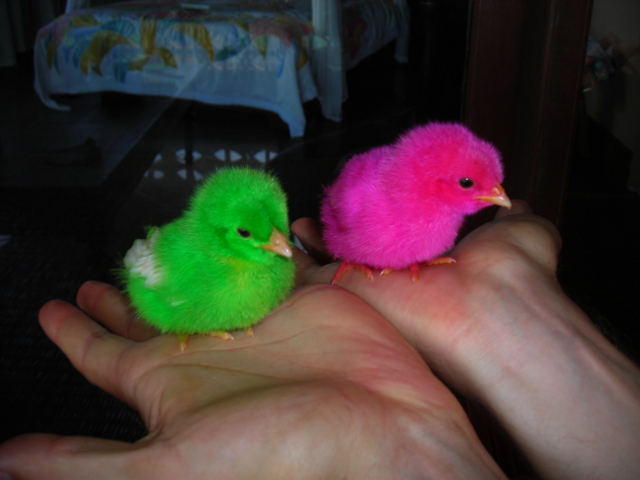