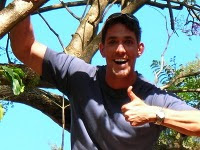 December 2008 - There is a bit of irony with my use of the word ‘plight’. Plight-less would be more accurate in describing my current state of affairs. (Author’s Note: There's more irony in the fact that I erroneously believed ‘plight’ to be synonymous with ‘quest’ or ‘aim’ as opposed to its actual definition of ‘predicament’ or ‘pickle’. Although the true meaning is just as, if not more apropos than my misunderstood one, it does not excuse my ignorance. It does, however, make me look like an idiot. Somebody spank me…in a disciplinary fashion.) 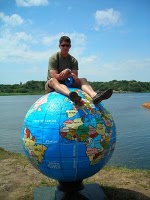 The fact is I have no clue about what I want to be when I grow up, sort of an issue when you're thirty-three years old. (Author’s Note: More of an issue when you're thirty-six.) My life as a civilian gov't contractor could transfer stateside (as opposed to Baghdad), but it is not my cup of tea (organic). After more than two years working in a war zone, it's break time. What next after Operation: Indonesia? Who knows? I am hoping for an epiphany where my true path is revealed to me in a dream-like, incense-induced coma punctuated with colorfully clinquant lights. And if it was narrated by David Attenborough, that would be tremendous. (Author’s Note: Still waiting.)

Gov't work (or any type of humdrum, daily slave-to-the-grind existence) is no bueno. Too many restrictions (especially with a security clearance). Too much structure. I do not want to sit on a couch and take bong hits all day, but I'd like to know I could without losing my job. (Author’s Note: I have yet to purchase a bong at weGrow). I want to visit Cuba, North Korea, and a bunch of other nations that would otherwise be verboten with a government paycheck.

Dress shirts and slacks can bite me. Bagel Mondays and casual Fridays blow. Nine to five with two weeks of vacation can go 'F' itself. I do not want to talk about how Rachel from accounting blew chunks into the punch bowl during the Christmas party and then gave the head custodian a hand job in the utility closet. No. No. No.

I know how this sounds. You are probably thinking I should go boo-hoo myself. And you would have a point. It is not that I do not want to work. It’s just I would like to have an occupation that makes me feel somewhat alive and have at least a modicum of satisfaction and fulfillment. Perhaps I ask too much, especially when the economy appears to be swirling down the shitter at an alarming rate (Author’s Note: Still swirling). Good thing my friends have stable lives, and more importantly, spare bedrooms.
Posted by Rich at 2:36 PM